Robots from Mitsubishi Electric and AI in biotechnology

Thousands of individual samples can now be tested every day – the AGAMEDE robotic system has been put to use at the Institute of Bioorganic Chemistry of the Polish Academy of Sciences (ICHB PAN) with the participation of Mitsubishi Electric, Labomatica and Perlan Technologies as technology partners. 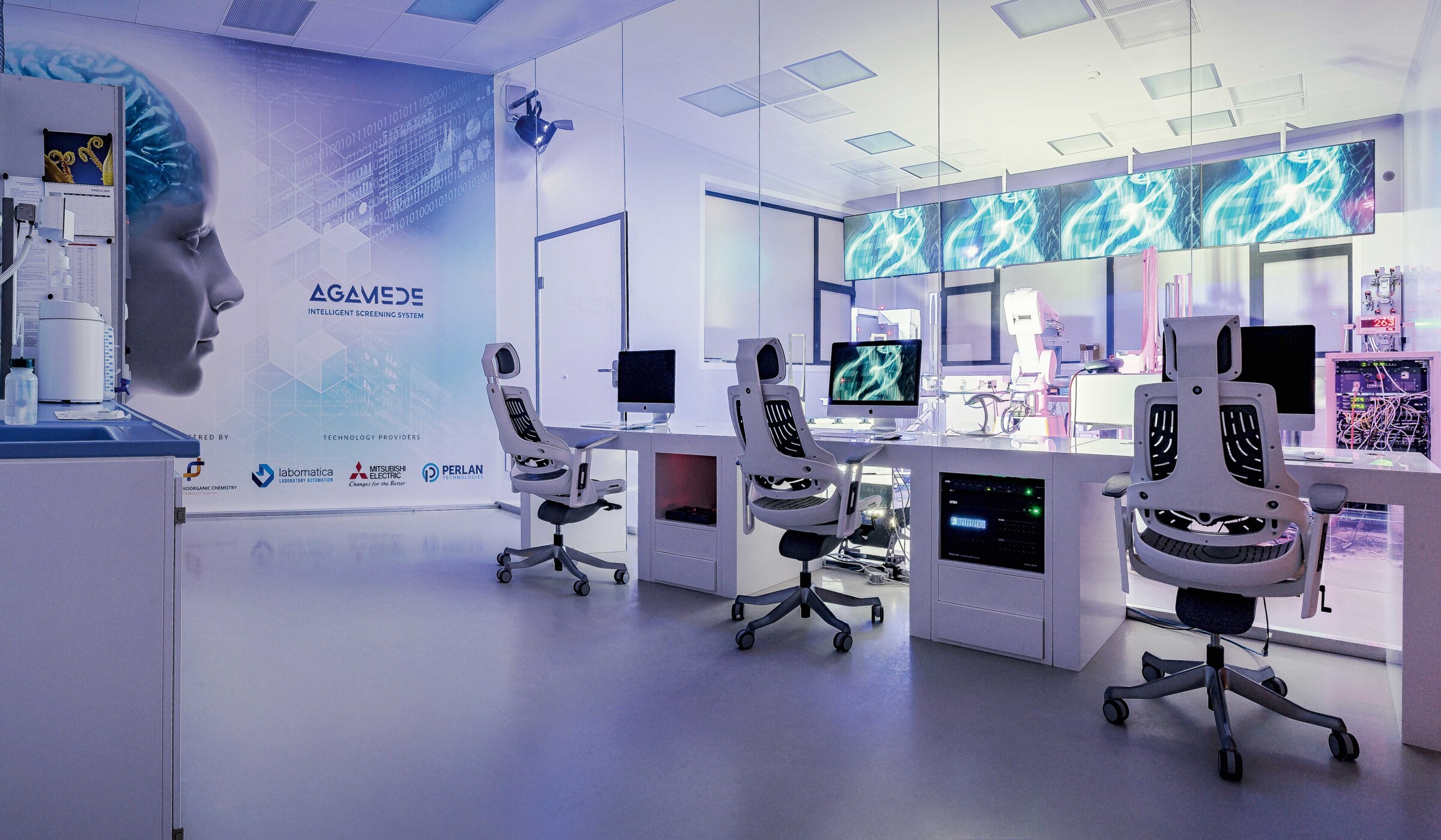 Thousands of individual samples can now be tested every day – the AGAMEDE robotic system has been put to use at the Institute of Bioorganic Chemistry of the Polish Academy of Sciences (ICHB PAN) with the participation of Mitsubishi Electric, Labomatica and Perlan Technologies as technology partners. It was developed to significantly speed up the diagnosis of SARS-CoV-2, but that’s not all. For it can also be used to research new drugs, develop personalised therapies for cancer patients or even formulate cosmetics – thanks to state-of-the-art automation technology combined with Artificial Intelligence. 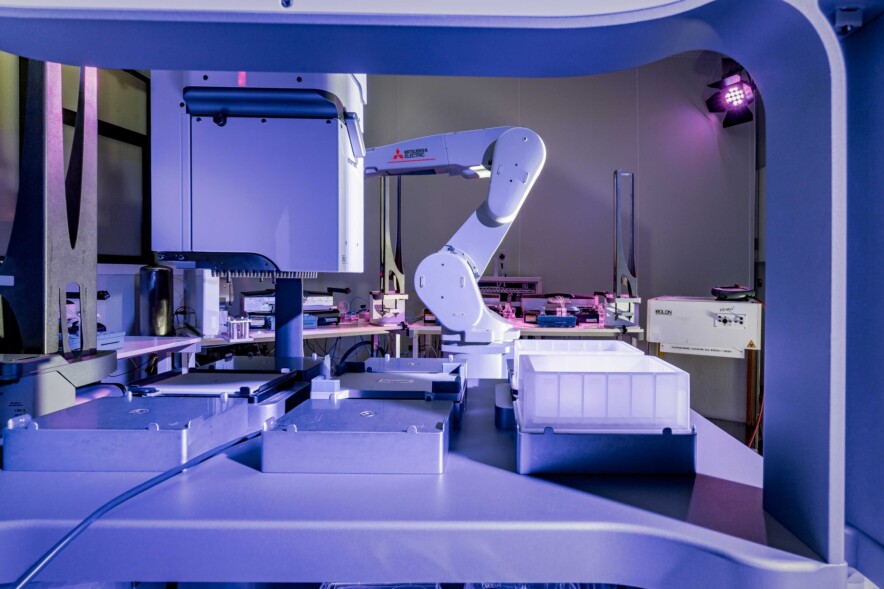 The Mitsubishi Electric robot is the central component of the system. It continuously operates the analytical equipment on the basis of specifications, conducting 15,000 tests per day, 7 days per week.

AGAMEDE is considered the first female scientist in history. Homer described her in the Iliad as living in the 12th century BC and being conversant with the healing power of all herbs and knowing how to mix them properly. Her name has been given to the laboratory automation system developed at the Institute of Bioorganic Chemistry of the Polish Academy of Sciences (ICHB PAN). What makes AGAMEDE unique is not its automation of laboratory work, but its integration of automation and Artificial Intelligence used for data interpretation using Labomatica’s Gene Game™ software. Thanks to this combination, the system is a “closed loop” in which the robots prepare experiments, read the results at a fixed point in time and interpret the data to autonomously prepare the next cycle of experiments. The operator’s tasks are limited to defining the problem, designing the experimental set-up and monitoring the correct running and operation of the system. The system’s task is to conduct experiments around the clock and deliver results. 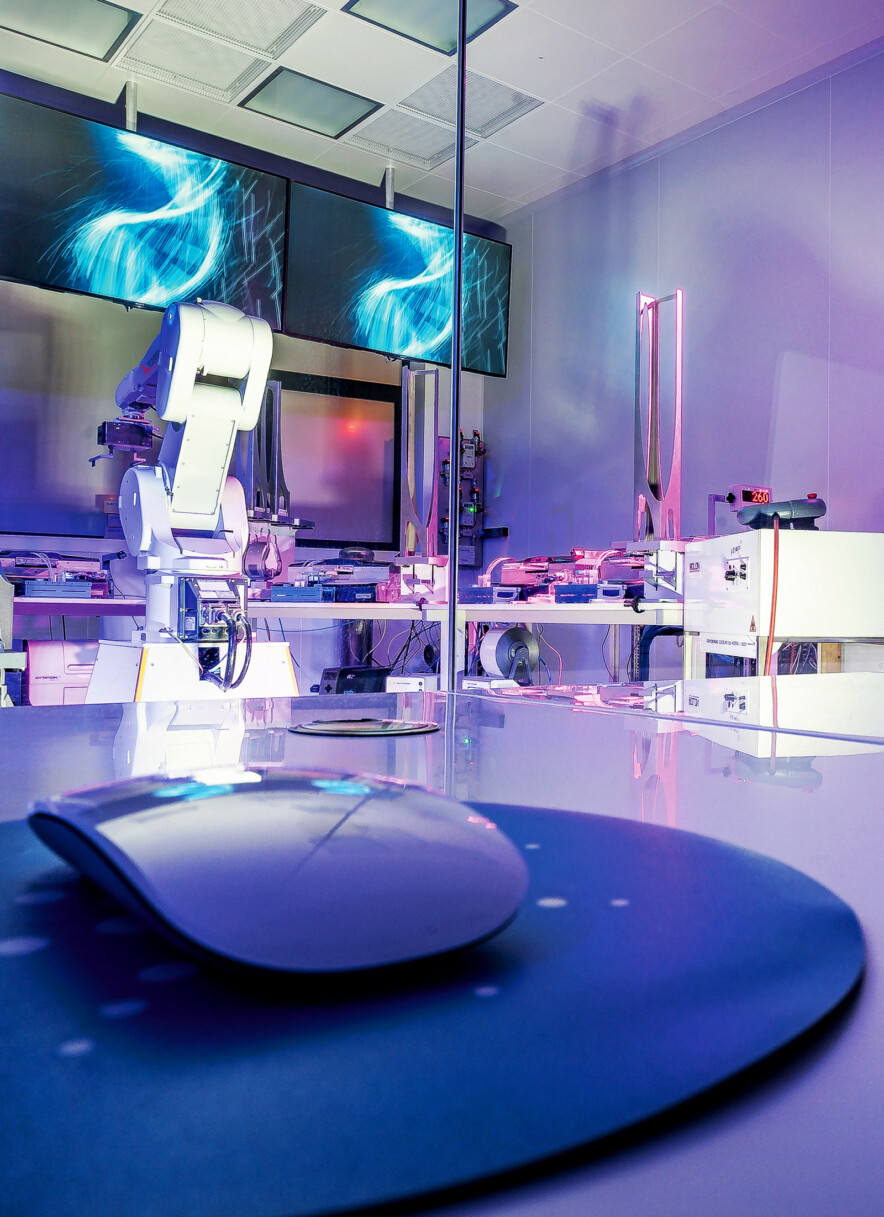 15,000 tests per day, 7 days per week, with Mitsubishi Electric robot

AGAMEDE is a high-throughput system that combines Artificial Intelligence with automation. A crucial breakthrough, because most automated high-throughput systems require a human operator to subjectively analyse the results and plan the next series of experiments once a cycle is completed. “On the other hand, thanks to the Artificial Intelligence module, AGAMEDE interprets the experiments on the basis of mathematical models without human intervention,” Radosław Pilarski, PhD, inventor and chief engineer of the system, stresses. “AGAMEDE can be used by centralised diagnostic laboratories, pharmaceutical companies engaging in drug development, and oncology laboratories looking for personalised therapies for patients, as well as in the R&D departments of chemical and biotechnology companies for the optimisation of bioprocesses,” he adds.

Work on AGAMEDE got underway at the Institute of Bioorganic Chemistry of the Polish Academy of Sciences in 2015. The system was originally developed for the EPICELL project, which was funded by the National Centre for Research and Development (NCBiR) as part of the STRATEGMED programme “Prevention and Treatment of Civilisation Diseases”. The aim of the project was to develop optimised media for the harvesting of cardiomyocytes with therapeutic potential from induced pluripotent stem cells (iPSCs) previously derived in the process of muscle cell (myocyte) differentiation. Combining expertise in small molecule epigenetic modulators and experience in cell reprogramming, the EPICELL consortium (Institute of Bioorganic Chemistry PAS, Institute of Human Genetics PAS and three hospitals from Poznañ) conducted studies that will result in the future development of methods for transforming induced iPSCs for the purposes of regenerative medicine – targeted implantation in the hearts of patients after heart attacks. The idea is to restore cardiac output to its pre-infarction state. The challenge was the sheer number of experiments needed for the design of a suitable “cocktail of small molecule epigenetic modulators”. For the 10 components of the cocktail and 10 different concentrations, this called for a total of 10,000,000 experiments. “With AGAMEDE, we searched for the right combination of compounds in a multidimensional system of solutions, and from this we developed the composition of the ‘EPICELL One’ reprogramming medium,” Prof. Wojciech T. Markiewicz, head of the EPICELL project, explains.

At the end of March 2020, the situation changed. The Institute of Bioorganic Chemistry of the Polish Academy of Sciences has been investigating RNA and DNA nucleic acids since its inception – and had all the facilities required for SARS-CoV-2 diagnostics. “Our institute was the first in Poland to develop a test – MediPAN – for the detection of SARS-CoV-2. We soon decided to combine AGAMEDE’s automation with our testing and developed a high-throughput diagnostic protocol that allows us to test 15,000 samples per day. This at least is the potential, because ICHB PAN as a scientific entity does not have an accredited diagnostic laboratory. This is an excellent outcome, because a human sample analyser can only process a few hundred samples at most,” says ICHB PAN Director Prof. Marek Figlerowicz. 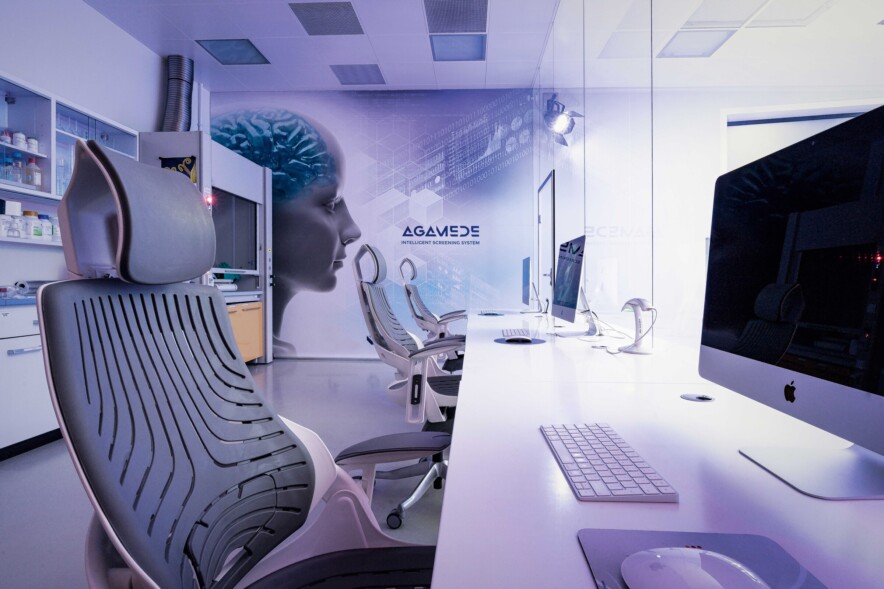 Agamede, the world’s first female scientist, has lent her name to this high-throughput system that combines Artificial Intelligence with automation.

Robots, PLC and software from a single source

The AGAMEDE project was set up with the participation of several technology partners: Mitsubishi Electric, Labomatica and Perlan Technologies. Mitsubishi Electric contributed a 6-axis robot, PLC controls and its MELFA Basic software. The Mitsubishi Electric industrial robot with its long arm reach is the central component of the system. It reproduces the work of a laboratory technician who continuously operates the analytical equipment on the basis of the experimental protocols entered by the operator into the control software.

The first female scientist in history.

An integrated set of robotic tools permits microscale experiments on 96- and 384-well microassay plates. This suite comprises industrial cell culture incubators, plate and tip feeders, pipetting stations, labellers, barcode scanners, plate sealers, fluorescence readers and spectrophotometers. The HCA automated confocal microscope with four fluorescence channels occupies a special place in the experimental array. For the biotechnology community, this instrument is the equivalent of the Hubble telescope applied to the microcosm. Instead of astronomical objects, it photographs and analyses millions of cells and tissue structures with similar quality and efficiency.

The device is supplemented by an acoustic dispenser that doses liquid quantities in the nanolitre range (millionths of a millilitre). The rapid dispensing of such small volumes of solution cuts research costs and increases throughput. It allows experiments to be conducted using the collection of over 115,000 chemical compounds.

“Implementing Poland’s first such advanced system that combines robotics with laboratory equipment, we benefited from our international experience. The support from Mitsubishi Electric’s international structure dedicated to innovative projects was very helpful,” says Roman Janik, coordinator of solutions for the life science industry in Poland. Looking back on work on the project, he says: “We were all working under time pressure to develop a solution that would take the strain off lab technicians as soon as possible. We were able to deliver a weekly throughput of 100,000 samples, which is scalable,” adding: “This is a phenomenal result”.

Bringing together many worlds

“The task, which would have been complicated in any case, was not made any easier by the time constraints. The AGAMEDE project is an interdisciplinary project that brings together the worlds of robotics, computer science, industrial design, mathematics, biology and chemistry. The solutions used in it are innovative and unique. As with many projects, the biggest challenge was to define the goal and how we wanted to achieve it. The key to achieving the goal was to find a common ‘technical language’ so that people from different sectors could communicate on the same level and clearly articulate their expectations. It was often difficult to bridge the gap between the academic world, which thinks in abstract terms, and the industrial world, which usually follows a fixed pattern,” Tomasz Scholz, a robotics engineer at Mitsubishi Electric, recalls.

The outcome is a system that not only works well, but also looks intriguing. “The visual identification refers to ancient Greece and is a tribute to the beginnings of scientific thinking in our civilisation and especially to women in science. To the poster we added futuristic elements that visualise the mythical AGAMEDE. This is how the figure of an ancient sculpture and a cyborg came about.

The blue, glowing brain and the bit motif unite human thought processes with Artificial Intelligence. The figure is intended to call to mind a humanoid robot that solves combinatory tasks symbolised by the manipulation of cubes like a Rubik’s Cube. We’re putting it on all promotional materials, including product packaging and prototypes created with the help of AGAMEDE. Following the current trends in the Artificial Intelligence industry, the website www.agamede.ai that advertises the project was set up in the national domain of the Caribbean island of Anguilla, which has the suffix abbreviation .AI,” Radosław Pilarski mentions.

At the planning stage, Pilarski emphasises, attention was also paid to the laboratory space in which the equipment was installed. A cleanroom for aseptic cell culture, which is dark and windowless in most labs, was given a completely new look here and broke with existing standards. Thanks to large, carefully sealed windows, it is well lit. Glass panels have been added to allow constant monitoring and control of the system without having to wear uncomfortable cleanroom suits.

The illumination of the apparatus with stage spotlights added a modern touch. Three beams of light in the colours blue, red and white mix on the AGAMEDE equipment, and the whole is accentuated by reflections of the beams on metal elements.

The workbenches are made of snow-white Corian, an extremely smooth but malleable composite material that has become very popular with designers and architects in recent years. Work is facilitated by high-resolution 4K monitors and cameras that allow remote monitoring of AGAMEDE and experiments anywhere in the world.

Name and place of company:
Polish Academy of Sciences
Poland