A million parts on the  zero-defects  principle 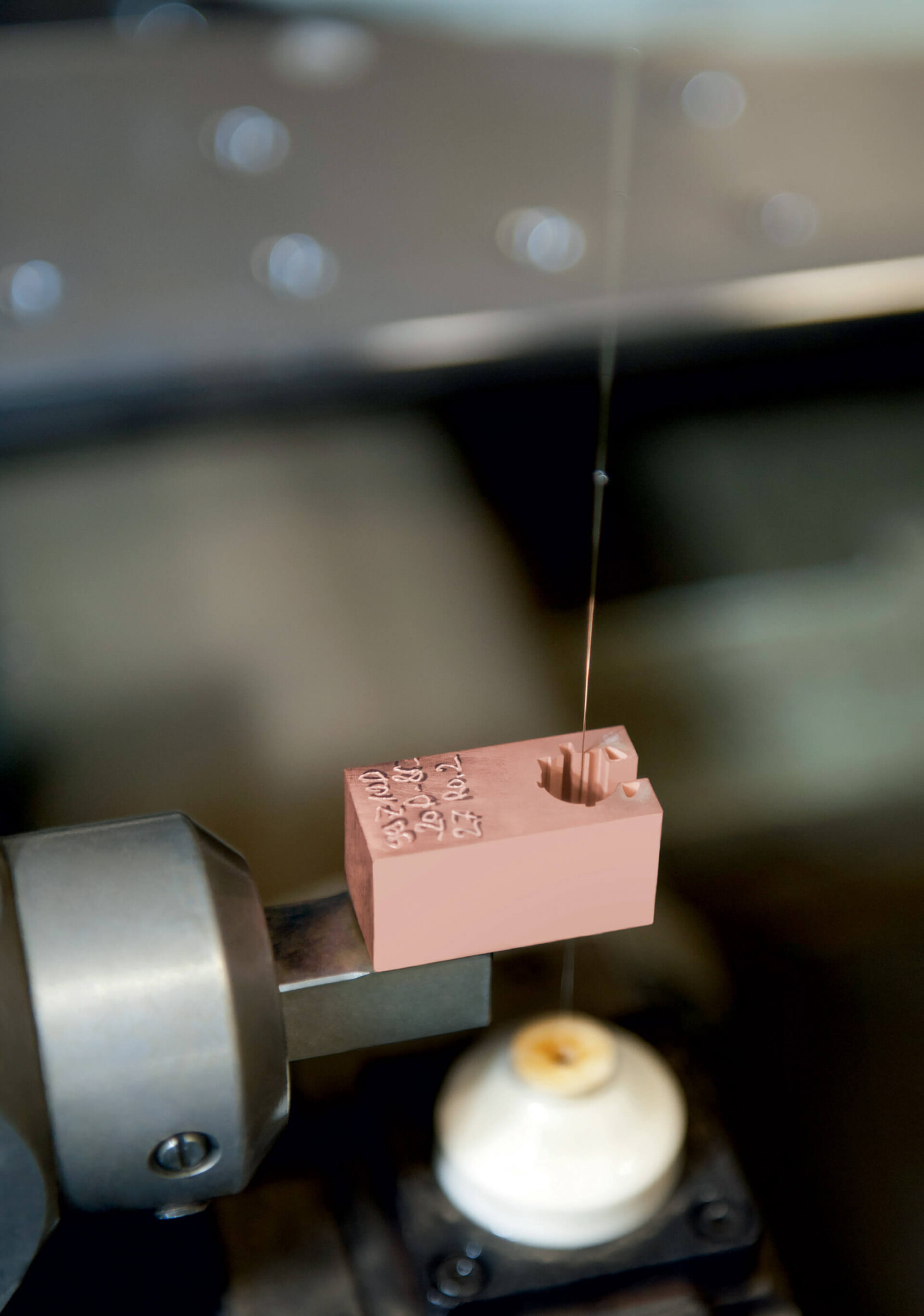 A million parts on the  zero-defects  principle

HAINZ & HÖRL Kunststofftechnik GmbH was founded in 1991 in simple conditions and rented rooms, initially producing only plastics packaging materials by injection moulding. 20 years on, HÖRL Kunststofftechnik employs a 106-strong workforce that manufactures precision plastic parts in what are mainly multi-cavity moulds in bright, air-conditioned premises. Today, HÖRL Kunststofftechnik chiefly produces components for plug connectors and, in doing so, serves a multitude of prominent customers in a variety of sectors such as the automotive industry, telecommunications, automation and optical waveguides. The multifaceted industries catered to also include medical technology.

HÖRL Kunststofftechnik has been running its own high-precision, totally digital and fully air-conditioned mouldmaking department since 1999. For company founder Thomas Hörl, precision has enjoyed priority from the outset. It is therefore only logical that their first wire-cut EDM machine should have come from Mitsubishi. Heartened by the reliability of this machine and the precision of its machining processes, they then purchased further Mitsubishi eroding machines. Six wire EDM machines from Mitsubishi Electric are currently in operation around the clock.

Since setting up its own precision mould-making department, the company has been covering the entire process chain for plastics injection moulding. Today, HÖRL is known as a full-service provider that provides everything from a single source, from mould design and fabrication through to injection moulding production. “High-calibre customers trust in our quality and reliability. Top quality combined with reliability and outstanding plastics expertise are what Hörl Kunststofftechnik and its employees aspire to,” says Alfred Heinl, head of mouldmaking. “With ongoing training and the implementation of advanced technologies and processes, we are able to supply our customers with technically high-grade plastics products at competitive prices,” he continues. “And this builds confidence.” However, the high level of customer satisfaction is attributable not only to quality, but also to a punctual and above all flexible parts supply. 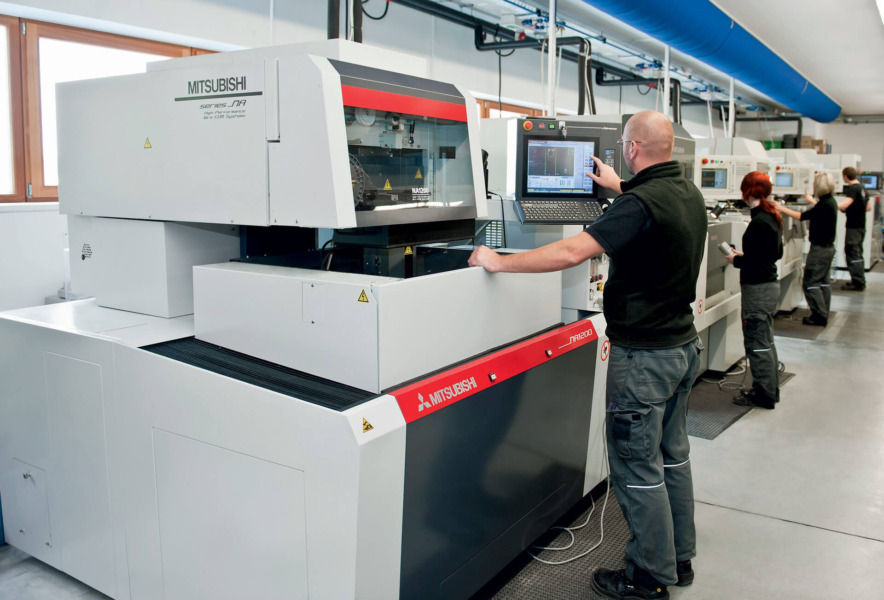 HÖRL has been working with wire EDM technology from Mitsubishi Electric since 2001. They currently have six machines.

HÖRL’s success can be ascribed to the perfectly optimised process chain and comprehensive quality management. The jobs usually start with the customer sending in 3D data for his component. After simulation and a feasibility check within as little as two weeks in some cases, a first injection mould is fabricated with a single cavity. After initial sample approval, often without a correction cycle, the customer then has the opportunity to define the desired number of cavities. “The big advantage for the customer is that initial and usually urgent demand can be met by the first, single-cavity mould while the multi-cavity version is being fabricated for mass production,” Alfred Heinl adds. However, this procedure necessitates a high level of availability of the entire machine park and the associated precision. 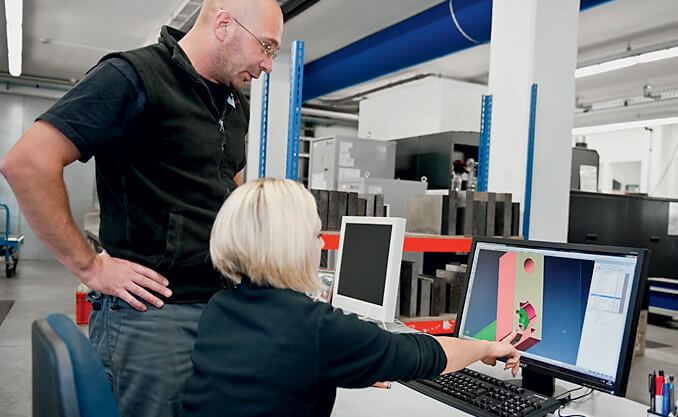 Quality from start to finish

Quality inspections take place throughout the process chain. Even in the case of parts produced in exceptionally large quantities – the injection moulding machines output as many as 100,000 plastic parts per day – an integrated camera system ensures in many cases that every single part is checked immediately after injection moulding. The investment in camera surveillance systems and a modern quality assurance system and highly skilled staff have made it possible to achieve zero-defects production. Hörl has been certified to ISO 9001 since 1993. These outstanding results are rooted in mouldmaking, as Alfred Heinl
explains: “Continuous production stands and falls with the quality of the injection­ moulds. This is why precision takes pride of place in mouldmaking.” It goes without saying that the tolerances are usually in the range of less than a hundredth of a millimetre. 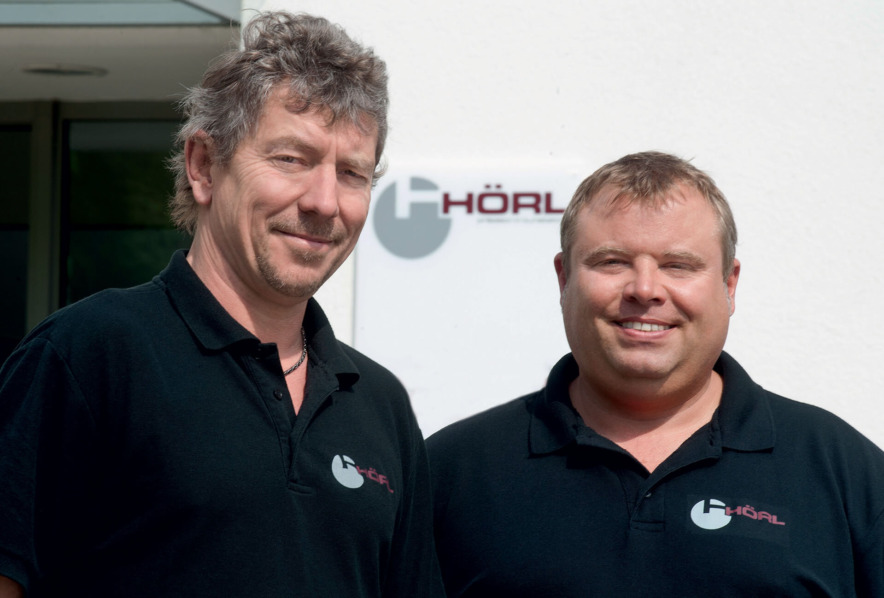 HÖRL invests not only in advanced machine technology in order to stay competitive, but also in top-rate staff. The company has been training its own staff for some time now, a fact underlined by the large proportion of trainees. 17 mouldmakers, electronics technicians and process engineers in the making are
currently undergoing training in the company. To keep pace with the high rate of growth, the proportion of trainees will be increased again in the new training year. “It’s becoming more and more difficult to recruit experienced and competent skilled staff, so we’re taking the matter into our own hands by nurturing the next generation of skilled personnel ourselves,” says Michael Passinger summing up.

As the manager in charge of training, Michael Passinger is fully aware of the value of junior staff being fully
integrated in production at HÖRL at an early stage. The reasons are obvious: “A training workshop of the kind found in many large companies wouldn’t make economic or practical sense in our case. In real-life production, trainees are introduced faster to their tasks and also have to learn to accept the responsibility that goes with the job.” A conspicuous feature of training is a change that has taken place in the last few years, namely that a third of all trainees are now female. “The times when our trades were male domains have long gone,” is the training manager’s conclusion.

The ongoing expansion of training and the associated increase in the workforce underscore HÖRL’s the rapid growth. Since there is no space for further machines in the current mouldmaking department, there are already definite plans for expansion. “The construction of new production shops a few hundred metres away is planned so that we can respond appropriately to sustained demand from our customers,” says Alfred Heinl looking ahead. 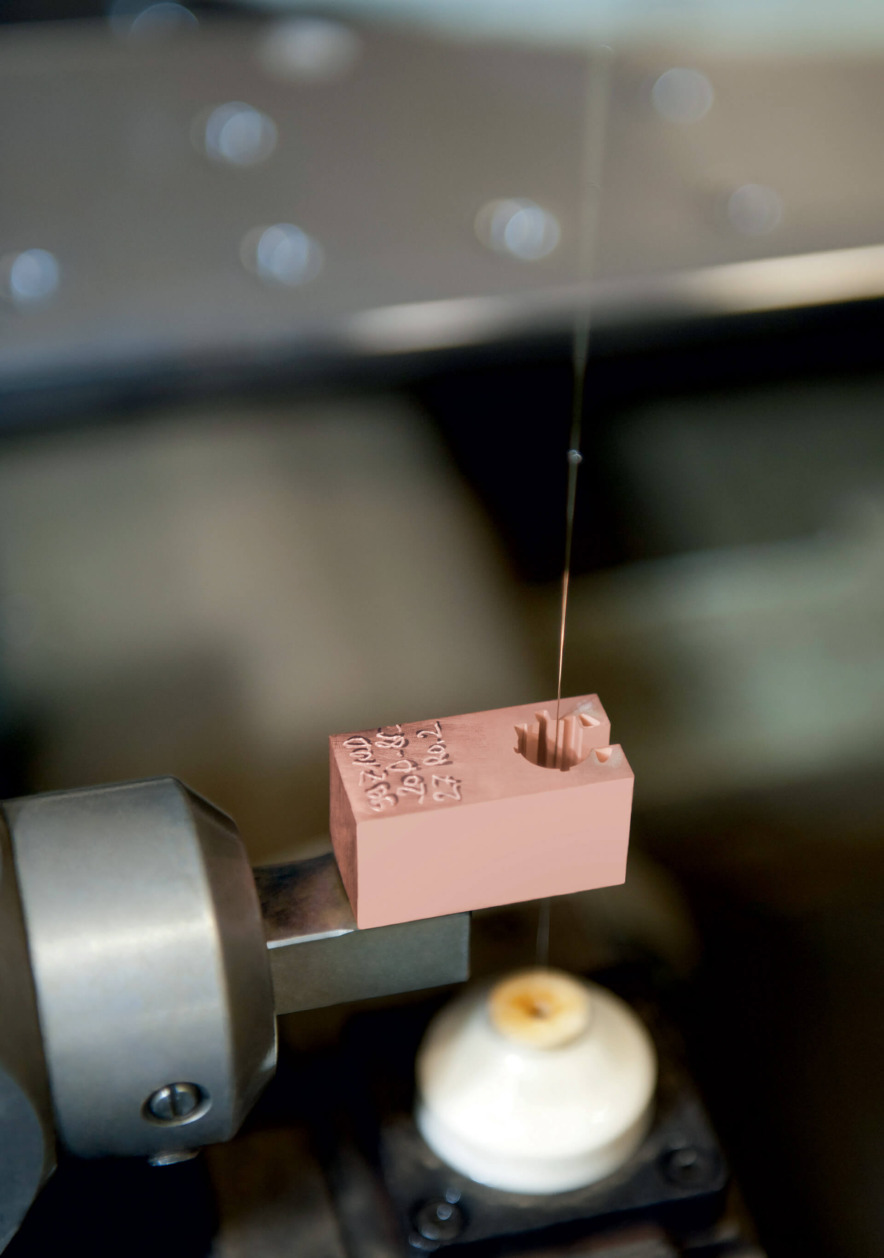 Along with mould components, copper electrodes are produced by wire EDM for subsequent sinker erosion. 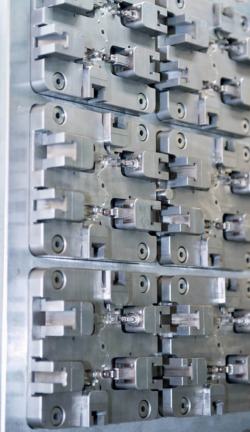 Complex moulds permit the production of up to 48 plastic parts with a single shot. The mould in the picture is designed for 12 parts.

The high precision of the injection moulds calls for equally precise machine tools in their production. Conventional machining has therefore been supplemented with wire EDM. HÖRL has been working with models from Mitsubishi Electric since 2001, with six currently in operation. “The machines perform their task extremely reliably and display high operator comfort,” says Alfred Heinl, explaining the company’s loyalty to the Japanese manufacturer. In this connection, he highlights the smooth-running automatic threading even with the thinnest wires and the user-friendly control.

Thanks to its satisfaction with Mitsubishi Electric, HÖRL again turned to its preferred wire EDM supplier for the most recently purchased machine. Although the existing machines all belong to the FA series, the decision went this time in favour of a NA1200 Essence. The reasons for this Alfred Heinl sees in the even greater precision and the possibility of working reliably with the smallest wire diameters. “The generator can be controlled even better, which offers us greater scope in terms of precision in the production of complex geometries.” Thanks to the fine wire diameter of 5 /100 mm, the much smaller radii increasingly demanded by customers are also possible.

The NA1200 Essence was developed with precisely such high-precision fields of application in mind. The tried-and-tested cast-iron design, load-free direct drives and ultra-swift communication via optical waveguide between the control, axis amplifiers and drives permit this high standard of wire erosion. “Since
the degree of precision that we and our customers aim for to will continue to grow, the NA1200 Essence was an important investment in our future,” is Alfred Heinl’s assessment of the machine’s importance. 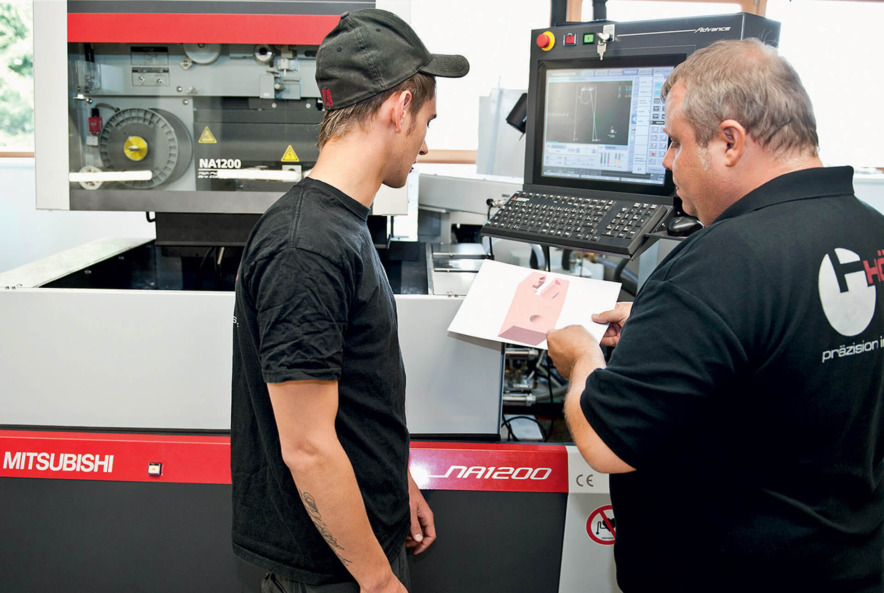 Core business:
Mouldmaking and the production of precision injection mouldings for the automotive and electrical industry

Please describe in a sentence what HÖRL Kunst­stofftechnik does!
Our range of plastics injection mouldings extends from mould design and fabrication through to mass production of injection mouldings and quality assurance.
How did you earn your first money?
With the production of plastic parts.
What motivates you?
The passion of producing high-quality parts.
What’s different about how you do things now, compared to five years ago?
We now operate with greater foresight and profitability.
Where do you see your company in five years?
Among the elite in precision plastic parts.
What was your biggest business success?
Achieving rapid growth in the years to date.
What’s your favourite way to relax?
When mould sampling has gone off well and the machine produces ­immaculate plastic parts.
What attributes do you value most in other people?
The ability to work in a team and with great precision, and honesty.
What was the best advice that anyone ever gave you?
Never stand still.
How would you briefly describe what you do to someone with no technical knowledge?
We produce precision plastic parts for the automotive industry, mobile phone manufacturers, medical technology and a number of other sectors. 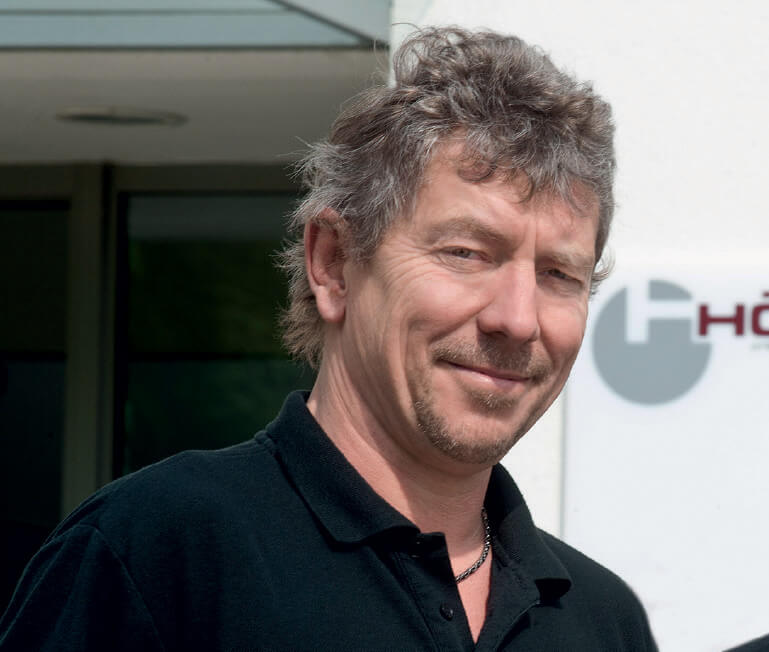