A number of successful entrepreneurs started off small, working from their garage. And one such entrepreneur is Alois Bott who got his one-man show by the name of “Alois Bott Mechanische Bearbeitung” off the ground in a barn in 1979. 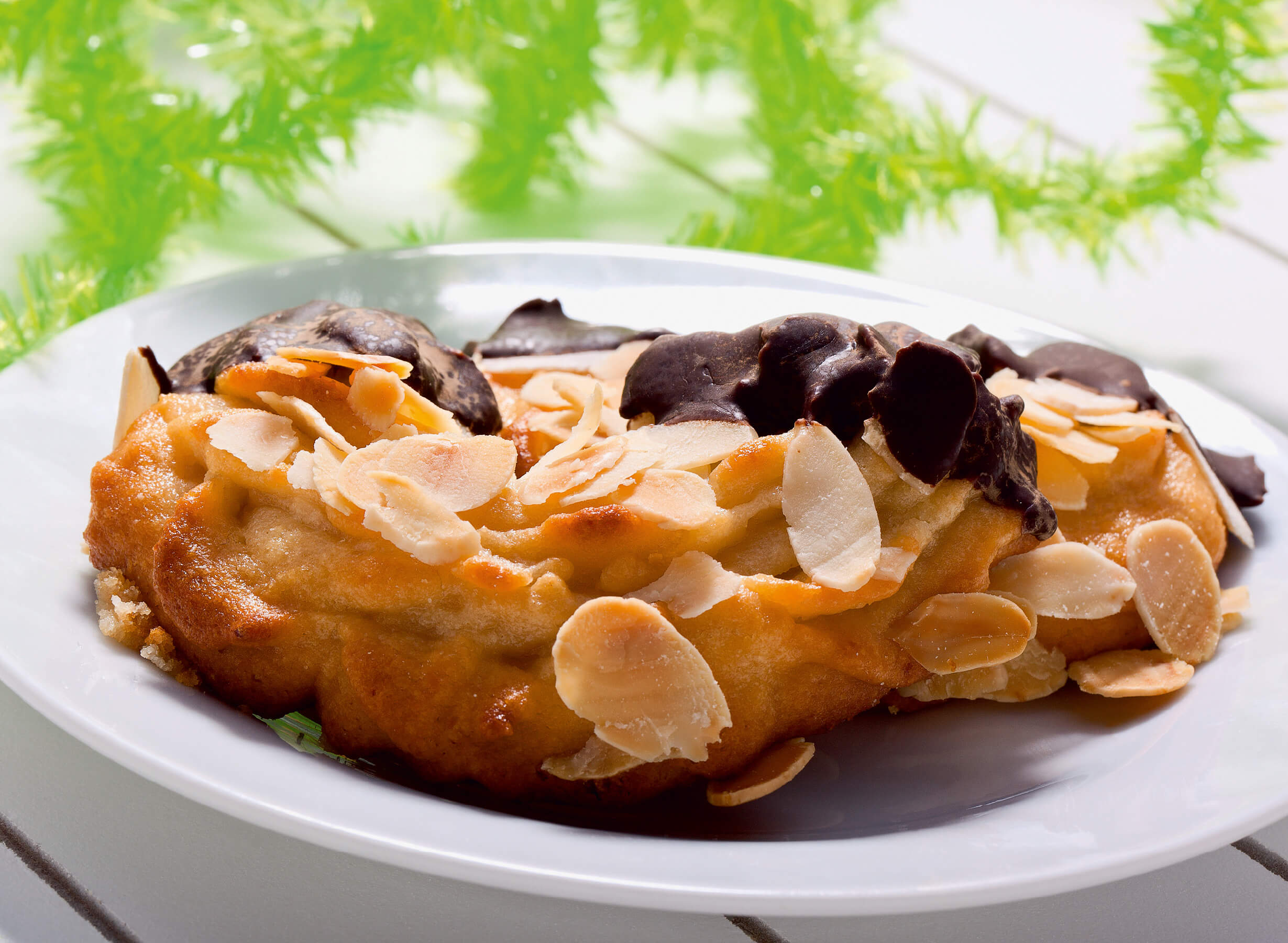 A number of successful entrepreneurs started off small, working from their garage. And one such entrepreneur is Alois Bott who got his one-man show by the name of “Alois Bott Mechanische Bearbeitung” off the ground in a barn in 1979.

Today, Bott GmbH Werkzeug- und Maschinenbau in Wolfegg has over 40 people on its payroll and has just ordered its second wire EDM machine from ­Mitsubishi Electric.

The wire-cut EDM machine MV 2400 S takes over two days to machine the small parts that remotely resemble Christmas trees. These are the flagship products of Bott GmbH in Wolfegg in Baden-Württemberg. Just 10 millimetres wide and 15 millimetres long, they have to take a lot of punishment.

Six such intricate parts are fitted in a subassembly that is installed in a customised machine and used in production as a stamping tool. Each component has to withstand extremely high pressures and show as little wear as possible. So that the cutting edges after 150,000 stamping operations are still as sharp and dimensionally accurate as on Day One, they are cut on the MV 2400 S wire erosion machine from Mitsubishi Electric. The machine takes almost 100 hours to cut 30 such parts for the stamping tool out of a block of cemented carbide. “Our customer uses this tool to produce large numbers of parts and markets them worldwide. For him we produce the component that is practically the machine’s key element,” explains Alois Bott, Managing Director of Bott GmbH. “Basically, parts are getting more and more complex and difficult to machine, as design engineers squeeze more and more functions in a single component. This is why toolmaking is such a difficult field. Everything has to be exactly right to the nearest hundredth. “In most cases it’s the tiniest deviations that account for major differences in quality,” explains Georg Strobel pointing to the new machine. “But with the MV 2400 S we’re excellently equipped.” 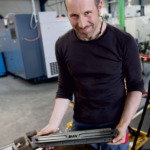 “In most cases it’s the tiniest deviations that account for major differences in quality. But with the MV 2400 S we’re excellently equipped.”

A success story takes its course

“I originally set up my own business so I would have more time for my leisure pursuits,” says company founder Bott, laughing. “But nothing came of that. What happened is exactly the opposite. We’ve grown because we’re efficient and good, we’ve bought new machines and taken on new staff, processed our orders and invested further.”

What started life as “Alois Bott ­Mechanische Bearbeitung” with a part-time helper in a barn in Bad Wurzach has developed over the years into a successful company that now produces technically elaborate machine components, stamping, punching and forming tools and bespoke machines for a huge range of industries and applications. In Grimmenstein commercial estate in Wolfegg, it now employs more than 40 people. The company has four divisions and over 2,500 square metres of production and office space.
Bott GmbH started off purely as a jobshop. The development and production of highly accurate single- and multi-component scales for powder goods came later as a second line of business. “Today it’s also our bread-and-butter business that has always helped us through lean times,” says Bott, underlining the closeness to his customers. Many highly reputed mechanical engineering companies, now regular ­customers of Bott GmbH, have settled in and around the Swabian Jura, Stuttgart, Lake Constance and the Black Forest. “I feel it’s essential that we’re not far from our customers. If there are problems, we can then solve them together. This way we can tackle com­plicated components that many other firms are unable or reluctant to handle,” says Bott outlining his recipe for success.

Its above-average manufacturing depth of 95% enables the company to handle the lion’s share of its output in-house. “We turn, mill, grind, wire-cut, measure and inspect everything on our own machines. Our employees work on the very latest CAD/CAM systems and our production equipment is geared essentially to the efficient fabrication of prototypes and small series,” says Bott with reference to his machining centres from Herle, Okuma and DMG. “This way we can cope with any desired quality or deadline and can produce any part, however extravagant, ourselves,” Bott explains, holding up a complex stamped part.
“But ultimately our survival depends on being able to produce such parts neatly and to a high standard of quality,” says Bott and tells us the story of how he became a special machine manufacturer more or less by accident 20 years ago: “We’d been producing various spare parts as a jobshop for Tekrum in ­Ravensburg.” The family company that joined Griesson – de Beukelaer GmbH & Co. KG in 2005 is one of the leading makers of fine confectionery and ice cream wafers. 20 years ago, company owner Krumm was looking for someone who could build, at the drop of a hat, a machine to ­mass-produce his famous almond crescents and Florentines.
“We were out of our league, to be honest, but my present Co-Managing Director Jörg Osterkamp said, ‘Let’s go for it!’ We sat down and designed, built and set-up the machine from scratch in eight weeks. Mr Krumm was nothing less than astonished, as all the other machine builders he had asked said it would take eight to ten months. Our speed enabled Tekrum to go into business with Aldi and launched our ­career as bespoke machine builders,” Bott laughs. “Toolmaking was then added seven years ago. This was the start of our relations with Mitsubishi Electric, because it is essential for our toolmaking activities to have our own wire EDM capability.”

Good employees are the ­backbone of any company

Toolmaking is the trade that calls for the most specialised knowledge and the best machinery. Bott adds that his company has been training its own apprentices for 25 years. “We now train two to three apprentices per year. This is quite a lot for a company this size,” says Bott, “but it’s what we do well and makes the company strong. We have a very low average age. And young people want to be able to use the latest technologies and prove themselves. 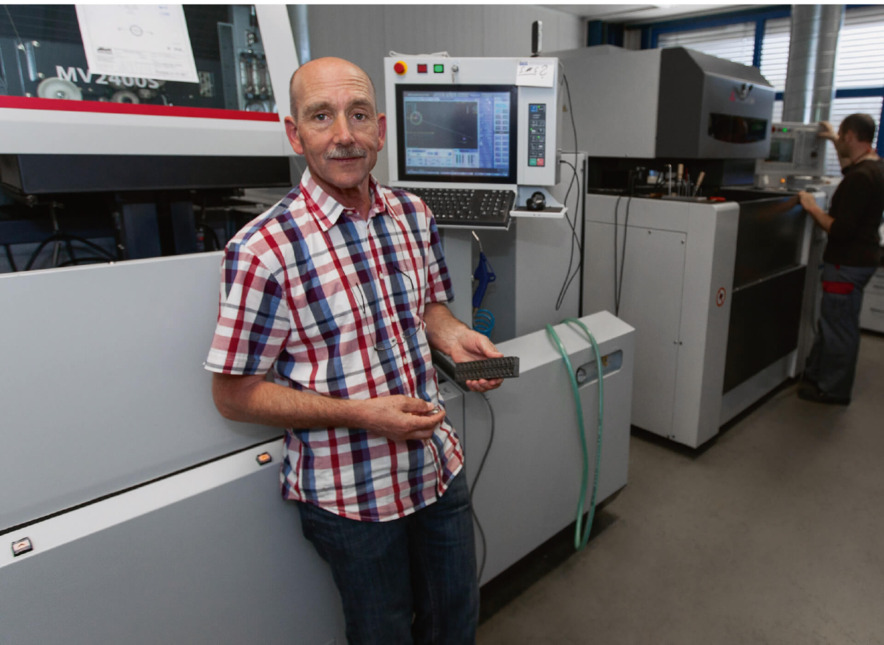 Two generations of wire EDM machines from Mitsubishi Electric: in the foreground the new MV 2400 S and in the background the FA 20.

When I founded the business in 1979, all my friends asked me why on earth I was doing it. I meanwhile know that we are only so good because the right ­people have come together in the right place at the right time. I’m firmly convinced that we have thus covered a large part of the business risk,” says Bott.
As a logical consequence, this means that the company has highly motivated staff and a highly progressive machine park. An example is the new MV 2400 S wire EDM machine from Mitsubishi Electric.

“We bought the predecessor, the FA 20, seven years ago. Karl Haller, our Toolshop Manager, chose the machine and swears by it,” Bott proudly ­explains. Originally selected solely for toolmaking, it has subsequently also been used for customised machine construction and jobshop work. So much in fact that EDM became a bottleneck. “But before we farmed out work and gave up control over our processes, we decided to buy a second machine,” says Bott. “This was a decision taken within two days, because punctuality and quality come top of our priorities. Our customers really appreciate it. They know that Bott supplies them with parts that are always dimensionally accurate and thus immediately ready to install. That’s our hallmark.”

How did you earn your first money?
Bolting cars together as a car mechanic.
What motivates you?
Maintaining and building on what has been achieved. It is motivation enough to see that the company doing well economically.
Where do you see your company in five years’ time?
We want to continue to expand the company and keep it stable in economic crises.
What was your biggest business success?
Achieving things that others don’t achieve. You can then see that something develops out of it.
What’s your favourite way to relax?
In the garden or motorcycling.
What attributes do you value most in other people?
Frankness, honesty and enthusiasm. 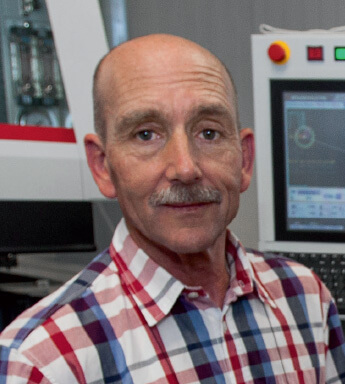