At the end of the toolmaking chain

When Sven Kitzmann and Armin Baur set up business with Future-TEC in Wutha-Farnroda in 1999, they knew precisely the policy they would adopt and which target groups they wanted to attract. The construction of complete tools was out of the question for them, as Kitzmann calmly explains seated at his desk, even if it would have been an appealing challenge for the graduate engineer... 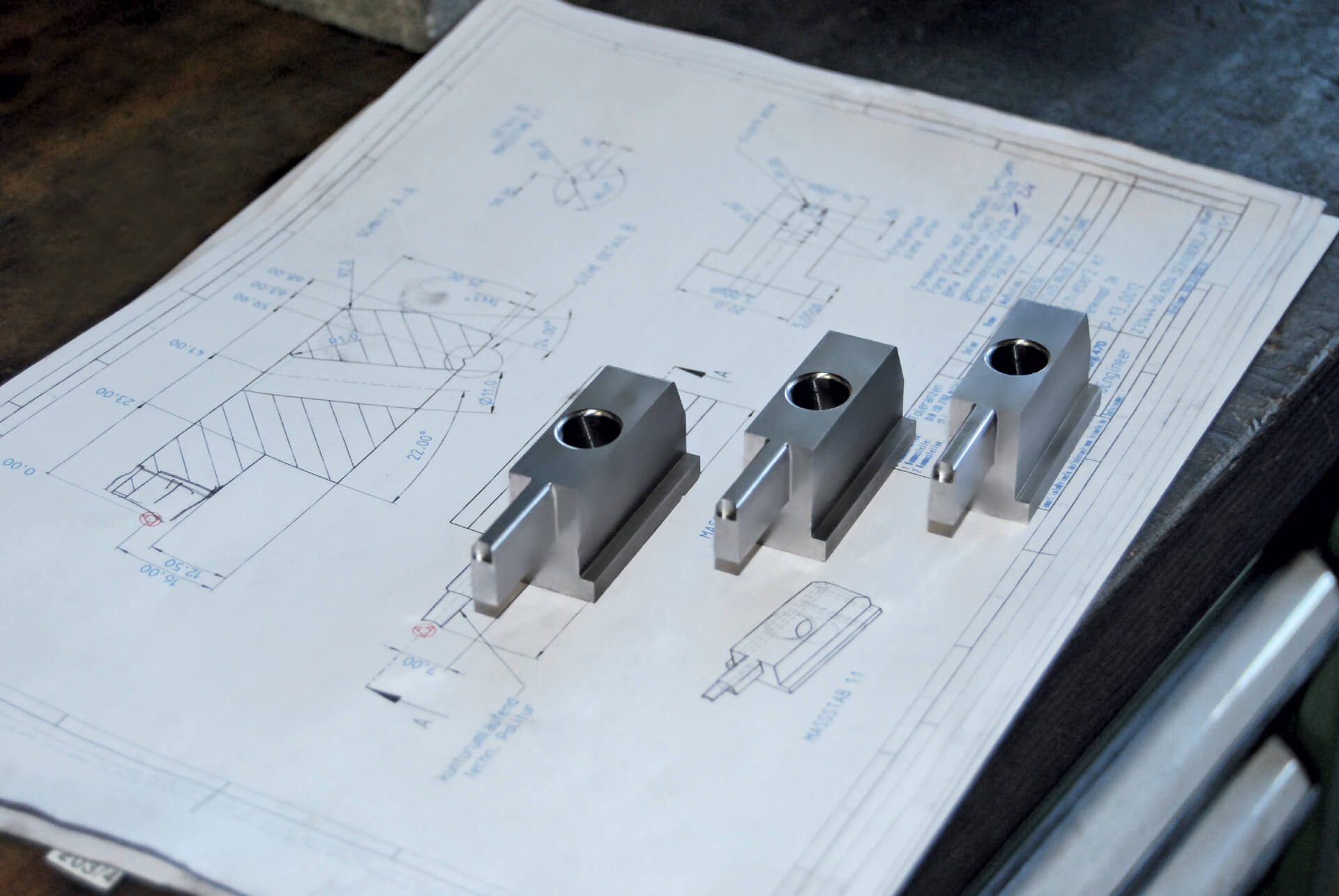 At the end of the toolmaking chain

When Sven Kitzmann and Armin Baur set up business with Future-TEC in Wutha-Farnroda in 1999, they knew precisely the policy they would adopt and which target groups they wanted to attract. The construction of complete tools was out of the question for them, as Kitzmann calmly explains seated at his desk, even if it would have been an appealing challenge for the graduate engineer. But this would have meant taking on all the toolmakers in the region and competing for the same pool of jobs. And holding one’s own alongside the established top dogs is difficult for a young, inexperienced start-up, particularly in a sector in which quality and reliability play such a huge role. Kitzmann knew that if they didn’t find sufficient customers for complete tools, they would soon go to the wall.

On the basis of these considerations and a precise market analysis, the young entrepreneurs managed to narrow down their target group. Future-TEC would be a partner and supplier to regional toolmakers. “Our goal,” Kitzmann tells us, “was to serve tool- and mouldmakers rather than compete with them. We wanted to offer our customers support when they reached their own limits.” In addition to classical order surpluses, these are more and more often complex special jobs or parts difficult to machine and calling for special expertise. Future-TEC has specialised in three areas: classical tool- and mouldmaking with injection moulds, bending tools and die casting moulds, model construction, and one-off and prototype fabrication. In the mould sector, the focus is on the production of shape-imparting 3D components. 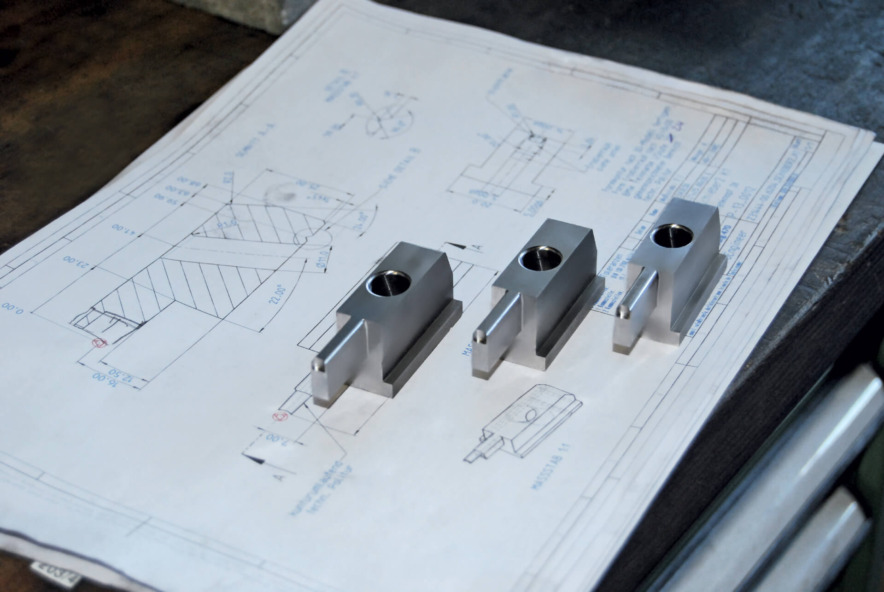 In the last few years, Future-TEC has built up specialised skills in the production of 3D tools.

The machining of graphite electrodes for die sinking, for example, calls for in-depth knowledge of the material and its processing. In many companies today, it is almost a standard process, Kitzmann explains, but a number of toolmakers have not yet taken the plunge and therefore need support in this area. “Another positive field for our company,” Kitzmann stresses, “is orders for the complete production of ­active mould components. Word of our comprehensive know-how in this sector and of Future-TEC’s high standard of quality has already spread.” All sides benefit from this sharing of tasks. “Since the project rests on several shoulders, the contracting toolmaker can concentrate fully on design and assembly, while we devote ourselves to the complete fabrication of the shape-imparting parts,” says Kitzmann summing up. 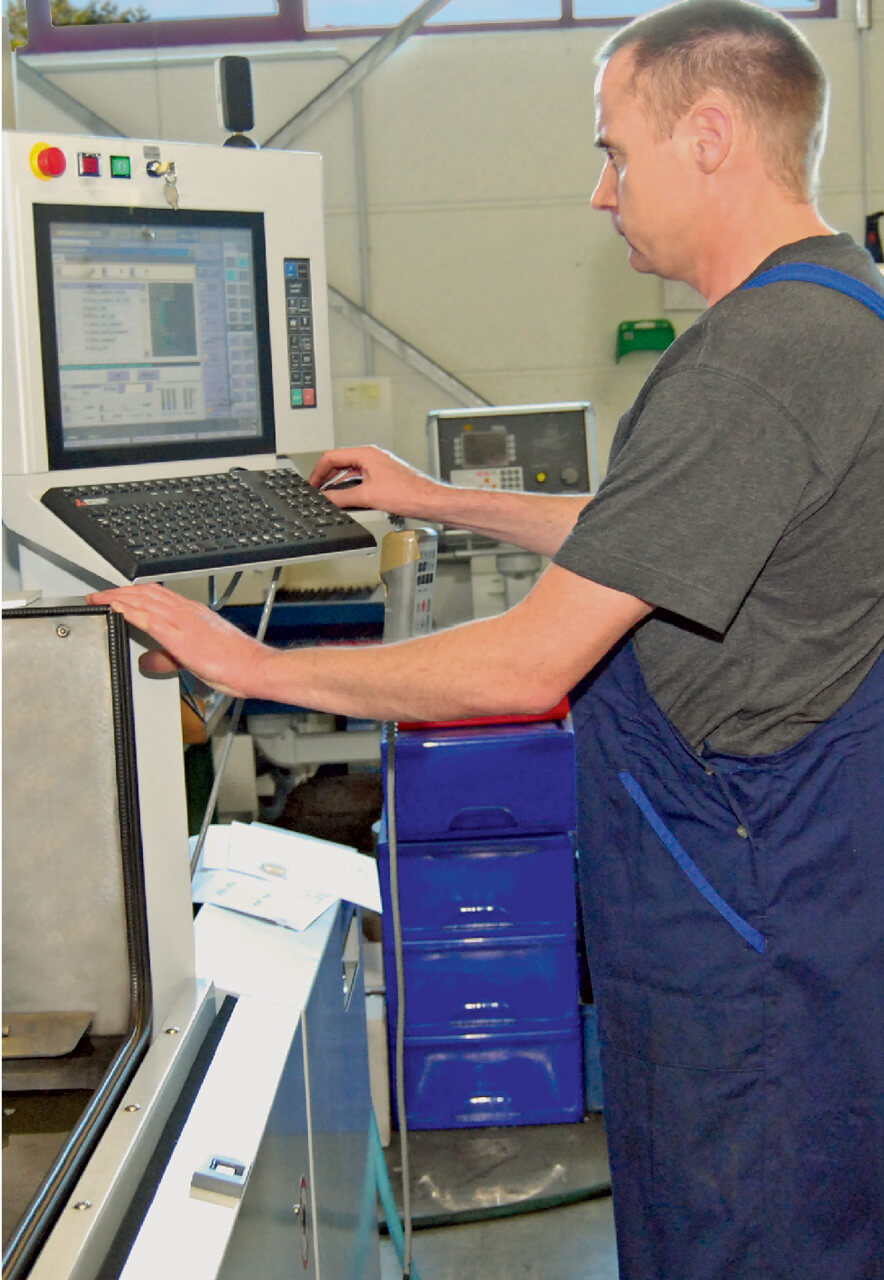 Kitzmann also works at the machine in his overalls.

“Our goal was to become a partner to tool-and mouldmakers and not a rival.”

A climate for quality

“If we could start up again with new production operations, with a new building on a green-field site,” Kitzmann fantasises, “we’d definitely go for a fully air-conditioned production shop with a constant temperature of 21 degrees Celsius all year round, summer and winter.” But making such dreams come true is difficult for a small service provider. “At present, only our measuring room is air-conditioned,” Kitzmann regrets. To minimise the effects of temperature, Future-TEC has moved the heat sources away from production as far as possible. So that accurately machined tools always reach the customer, the company has a precise coordinate measurement system that is air-conditioned and works at precisely 21 degrees.

No workpiece leaves the company without a measurement record. Since quality and dimensional accuracy are existentially important for suppliers to toolmakers, Future-TEC has recruited a measurement technician who is responsible for measuring all the parts. The data recorded are used by the company not only for internal quality monitoring, but also as verification of the demanded dimensional accuracy vis-à-vis the customer. If desired, the customer is supplied with the complete measurement records together with the workpieces. However, many customers dispense with full workpiece documentation and trust in Future-TEC’s production quality. “Since tools and moulds are usually designed for long periods of service,” Kitzmann explains, “we may be called upon to supply data on certain tools even after years have passed. So we archive the details of each job long-term.”

“Until 2012, we were unable to provide our customers with any services in the wire cutting sector. We either contracted the work out or turned down the job. Neither option was satisfactory for us in the long term,” says Kitzmann outlining the situation as it was. “We’d been wanting to integrate wire cutting in our company for years because it’s an elementary process in toolmaking.” In mid-2012, Future-TEC took the decision to invest in a new EDM machine. “Since we were totally new to wire cutting at the time, we were open to all offers,” the business owner explains. “Like with all other investments, the overall package of technology, service and parts supply and of course machine overheads was decisive.”

The visual display of the measured data documents and illustrates the standard of quality.

The range of EDM machines on the market is pretty diversified. The company therefore took a close look at the market in advance and approached several manufacturers. “In particular,” Kitzmann explains, “we wanted to know which size of machine would suit us and our production activities, which manufacturer could offer us newcomers good technical support and, last but not least, who has a hotline worthy of the term and can give quick and expert advice.”

“Good colleagues – a term that I can happily apply to most of our customers,” Kitzmann reports, “usually tell you the unvarnished truth. So I asked them about their experience with EDM. How reliable are your machines, how satisfied are you with them and what about the aftermarket?” This way Future-TEC has benefited from the experience of its customers. “If a colleague tells me his experience with his wire cutting machine, I take it seriously. And the decisions I take are based on such findings,” Kitzmann adds.
This is how Mitsubishi Electric arrived on the shortlist with its MV2400S. This erosion machine then picked up further points with Future-TEC – among other things, with its training centre in nearby Eisenach and with its integrated programming system. For Kitzmann, this is a “five-digit” argument, because for the shortlisted ­machines it had to be purchased in addition. 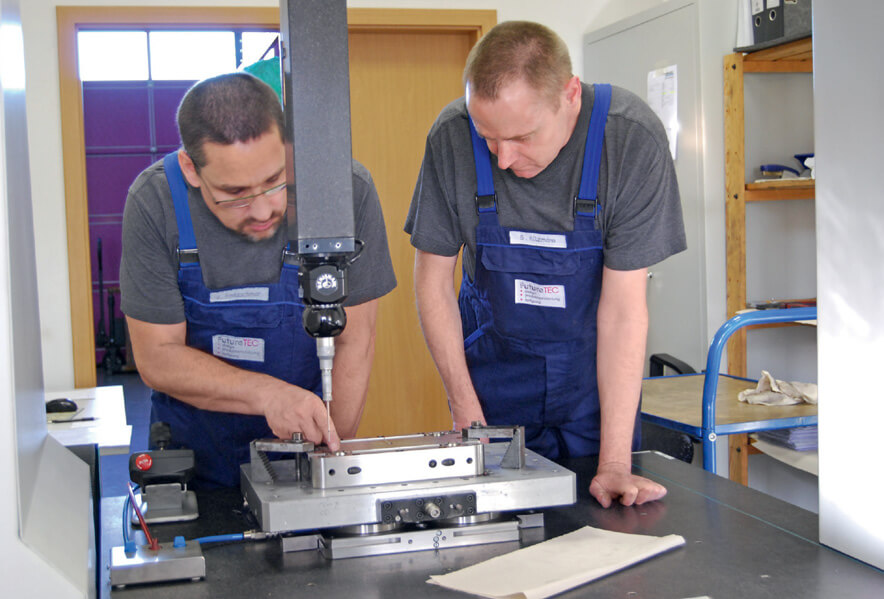 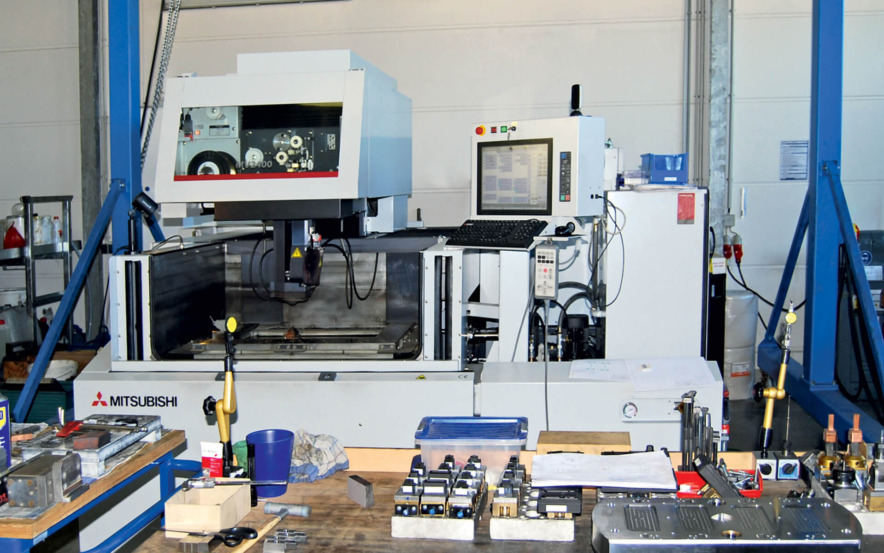 The MV2400S has been in operation since December 2012 and has since been running trouble-free.

“This erosion machine then picked up further points with Future-TEC – among other things, with its training centre in nearby Eisenach and with its integrated programming system.”

A year of trouble-free EDM

In Kitzmann’s view, there are machines that may be better than the Mitsubishi Electric MV2400S on this or that count, but there is none that is equal to it when everything is taken into account. The MV has been in operation at Future-TEC since December 2012 and has since been running trouble-free. “The only problems we’ve ever had,” Kitzmann explains, “were operating errors, we have to admit. Support via the hotline was sometimes necessary. Otherwise – and I’m not saying this to flatter Mitsubishi Electric – we’re very happy with our MV2400S. It’s extremely reliable, cuts quickly with the desired precision and yields outstanding surface quality. We haven’t regretted the decision one instant. The overall package is just right, the cost structure is as well, and the machining results are fully in line with our expectations.”

With the new wire cutting machine, Future-TEC can now respond better to growing demand and offer its customers an extended range of services. The customer benefits directly from this, as the lead times have become shorter. “As a provider of services, we’re at the end of the chain and the deadline pressure is passed on to us. We’re aware of this and can live with it as well,” explains Kitzmann. “And with the new MV2400S our lives will be that bit easier.”

Core business:
Future-TEC is a service provider to tool-, mould- and model-makers and a producer of one-offs and prototypes.

How did you earn your first money?
As a designer of textile cleaning machines.
What is your source of motivation?
I still enjoy the job even after 15 years – with all its imponderables.
What’s different about how you do things now, compared to five years ago?
I’ve got the experience to be more relaxed and calm about taking decisions.
Where do you see your company in five years’ time?
We shall continue to have highly advanced equipment and be on the lookout for new technologies and methods.
What was your biggest business success?
We’ve always achieved our goal of investing in advanced technologies on a major scale every two years.
What’s your favourite way to relax?
I can relax best at home in the greenery of my garden.
What attributes do you value most in other people?
Honesty, the ability to think independently and the willingness to accept responsibility.
What’s the best piece of advice anyone ever gave you?
To sleep on important decisions that have to be taken. 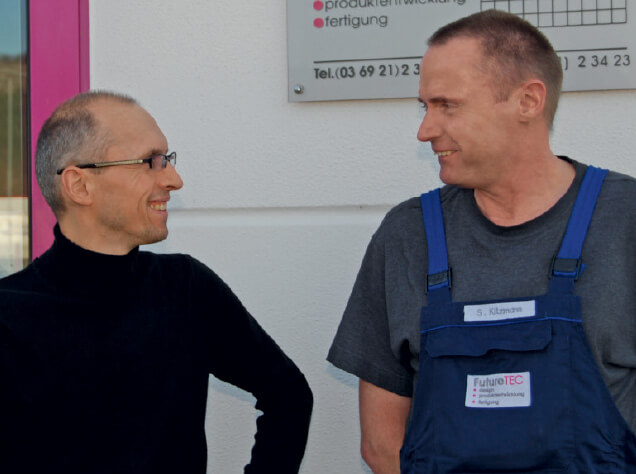