When HAIL-TEC needed a new wire-cut EDM machine, they didn't hesitate for long. Displaying open-mindedness, speed and resolve, the Swabian firm purchased the machine on show at the AMB fair and can now pride itself on being the first German user of the MV1200S 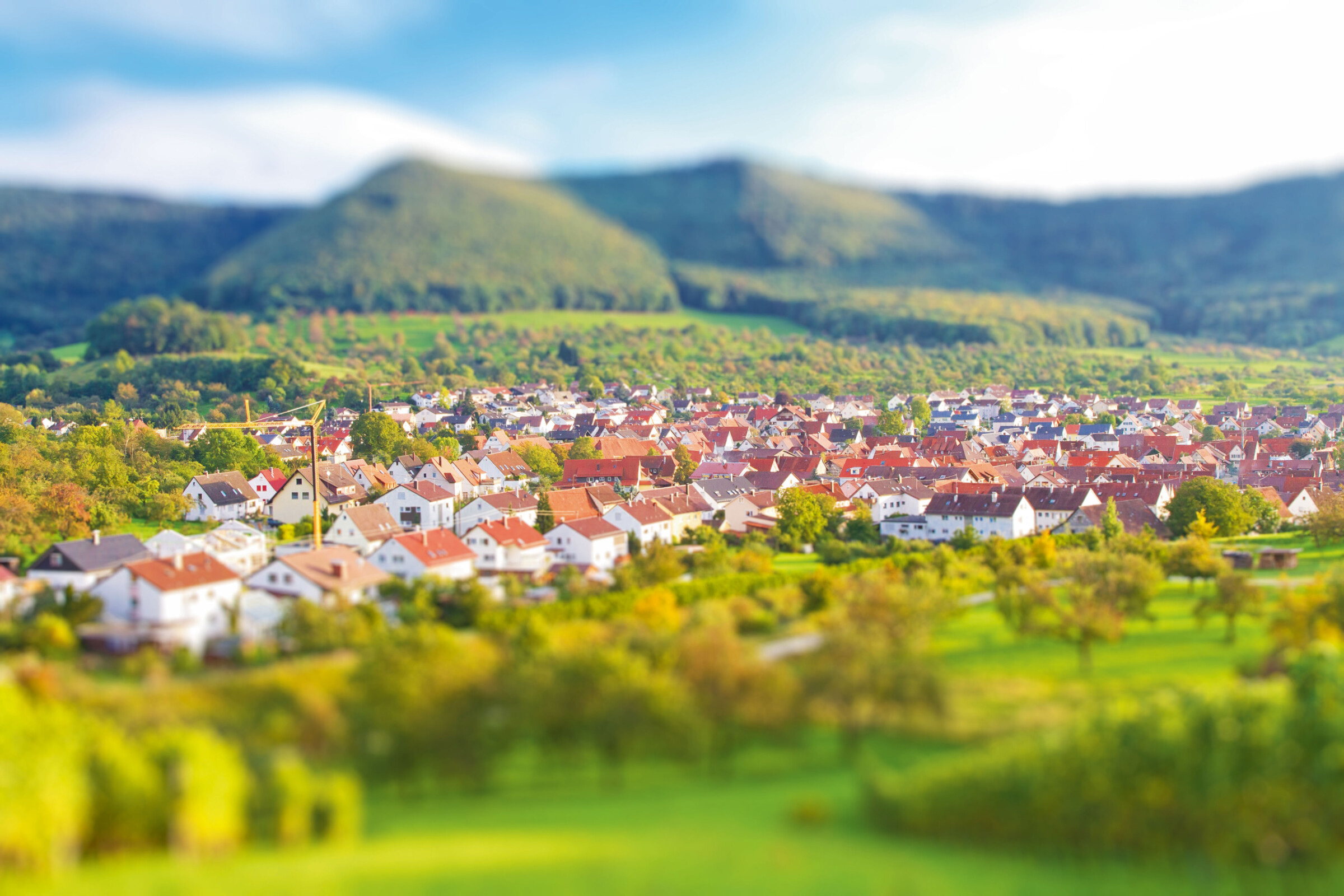 When HAIL-TEC needed a new wire-cut EDM machine, they didn’t hesitate for long. Displaying open-mindedness, speed and resolve, the Swabian firm purchased the machine on show at the AMB fair and can now pride itself on being the first German user of the MV1200S 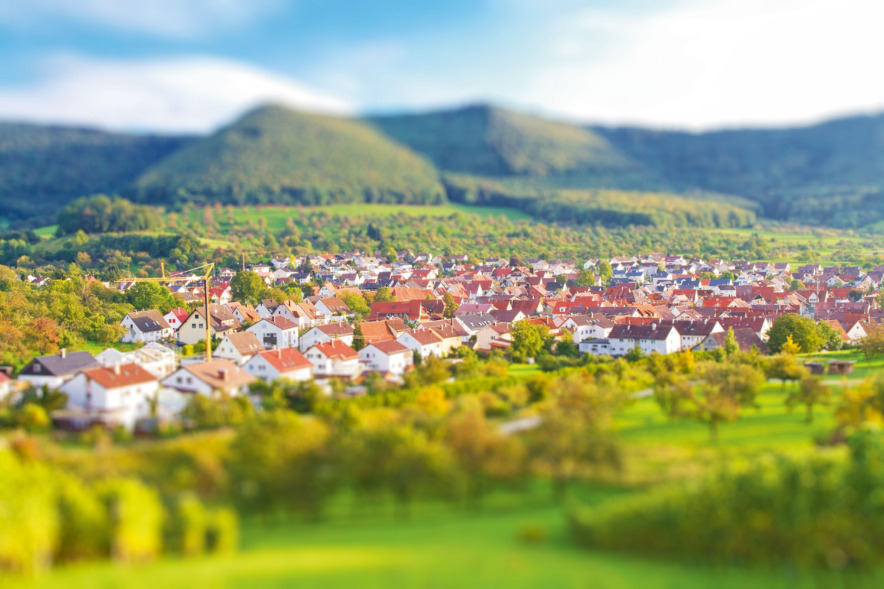 Customer proximity the key to success.

There may be bigger firms, but scarcely any that are more delightfully located than HAIL-TEC GmbH. To one side, water buffaloes can be seen grazing, the unsung stars of this idyllic biosphere reserve. “Our approach was indeed a little unusual when we decided eleven years ago to convert the originally agriculturally used building into an industrial enterprise,” Wilfried ­Hailfinger, Managing Director of HAIL-TEC GmbH, admits. “But the somewhat remote location does have its advantages. Our employees, our biggest asset, feel very much at ease here and can devote their entire concentration to the tasks in hand.” The company operates in the fields of punching and bending, laser machining, and in the making of tools and fixtures. It has made a name for itself particularly in the medical, aerospace, textile and automotive sectors when it comes to the production of laser-cut, punched or bent components and entire subassemblies with high precision or with particularly intricate shapes. The workpieces can be found in endoscopes and disposable equipment in operating theatres, in special locking components in the aerospace industry, in machine components for knitting machines, and in motor vehicles. What all these applications have in common is that the required tools and fixtures usually have to be produced within two to four weeks. And this can in itself be a challenge. 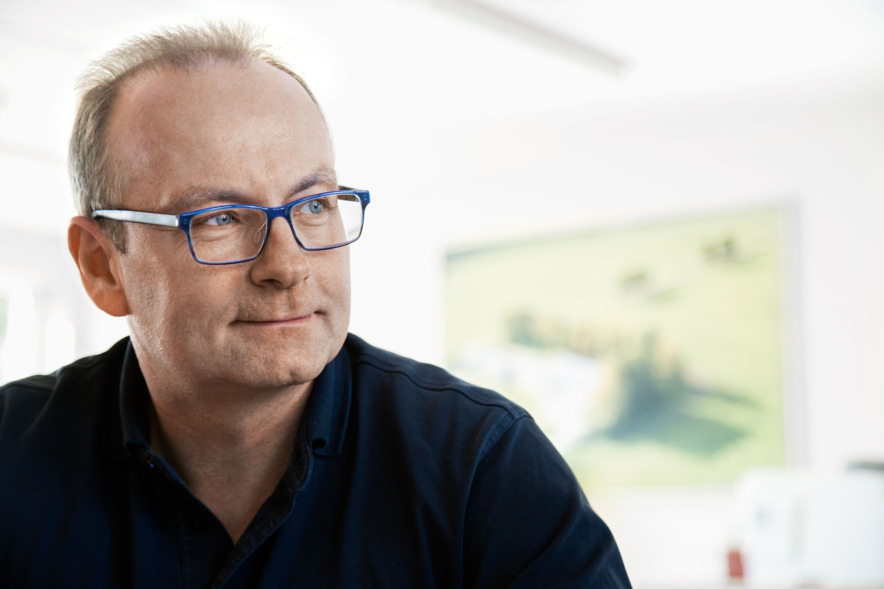 “Mitsubishi Electric is just such a supplier that also takes the needs of small companies seriously.” Wilfried Hailfinger, Managing Director of HAIL-TEC GmbH

“When you farm out such items, you’re usually faced with deadline and quality issues. That’s why we attach importance to performing as many services and value-generating activities here on the premises,” Hailfinger reports. “We all work very closely with the customer, from the first drawing, prototype or pilot series through to mass production itself.” In addition, HAIL-TEC also produces prototypes, series parts and workpieces under subcontract. Here again, they have to stay in close contact with the customer, particularly as the number of items per series is smaller. The customers of HAIL-TEC therefore need a supplier that is exceptionally flexible and capable of responding quickly to a broad spectrum of requirements.

“They can only manage this breadth and diversity with machines of the right quality,” Hailfinger insists. And this is precisely where there used to be problems. HAIL-TEC has a machine park equipped with the very latest machine tools, consisting of turning, grinding and milling machines and, until recently, including an older wire-cutting machine. The drawback of the latter was that it no longer delivered the demanded precision and wasn’t reliable enough either. “It was certainly annoying when the machine failed to process a series overnight and we had to start all over again the next day,” ­Alexander Renz, Project Manager at HAIL-TEC, reports. For HAIL-TEC, it became obvious in the summer of 2012 that they now needed a machine that does its job flawlessly and can be relied on a hundred per cent, e.g. so that samples can be quickly machined and supplied.”

This dependability ­during unmanned shifts is invaluable.

It was at this time that we were getting more orders for large series, so we also needed a faster machine and had to simply produce bigger tools,” Renz recalls. But there was also one other reason for purchasing a new machine. “We wanted to elevate wire-cutting to the next level, i.e. start a new quality drive in which we are capable of working with even greater accuracy and efficiency and with greater availability.” 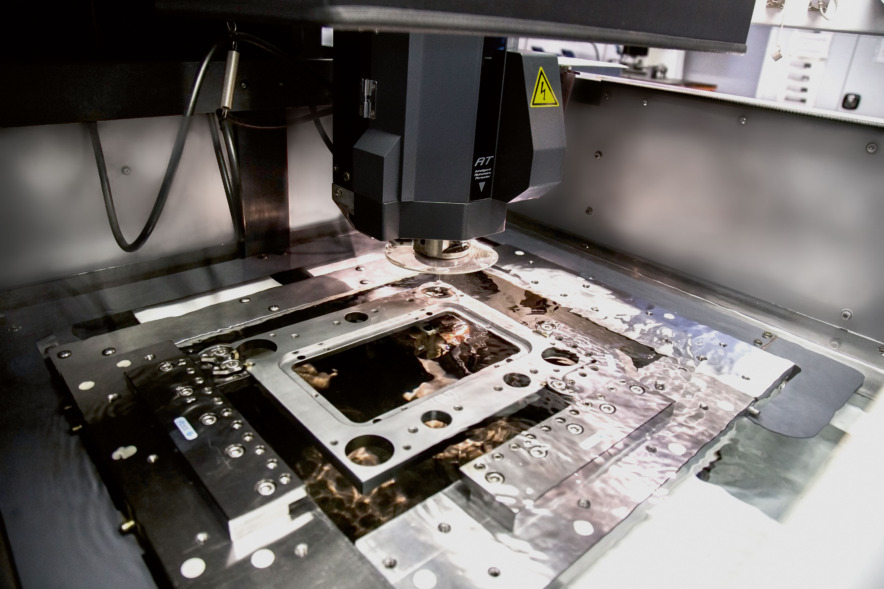 The ancillary equipment of the compact MV1200S is optimallyintegrated in minimal space.

Elevating wire-cutting to a new level.

From the trade fair straight into production

It was with this motivation that Hailfinger and Renz went to the Stuttgart AMB fair three years ago, having obtained detailed information on the Mitsubishi Electric machines in advance. The speed at which the events then unfolded still brings a smile to the two men’s faces today. “We practically bought the demo machine, the MV1200S newly launched on the market, from the Mitsubishi Electric exhibition staff,” says Hailfinger. “And it was incredible how well Mitsubishi Electric organised everything else.” The machine – the first of its type in Germany, as it happens – found its way straight from the exhibition centre to Hohenstein-Meidelstetten. Within next to no time, training at the Mitsubishi Electric Training Centre was organised and commissioning of the machine was performed without a hitch. The production of punched and bent parts for the firm’s own tools got underway after only two weeks. The fact that this was possible also has something to do with the machine’s intuitive operation, as many ­functions are logical and self-explanatory. “All the manuals can be called up directly by the control,” says Renz identifying another positive feature. 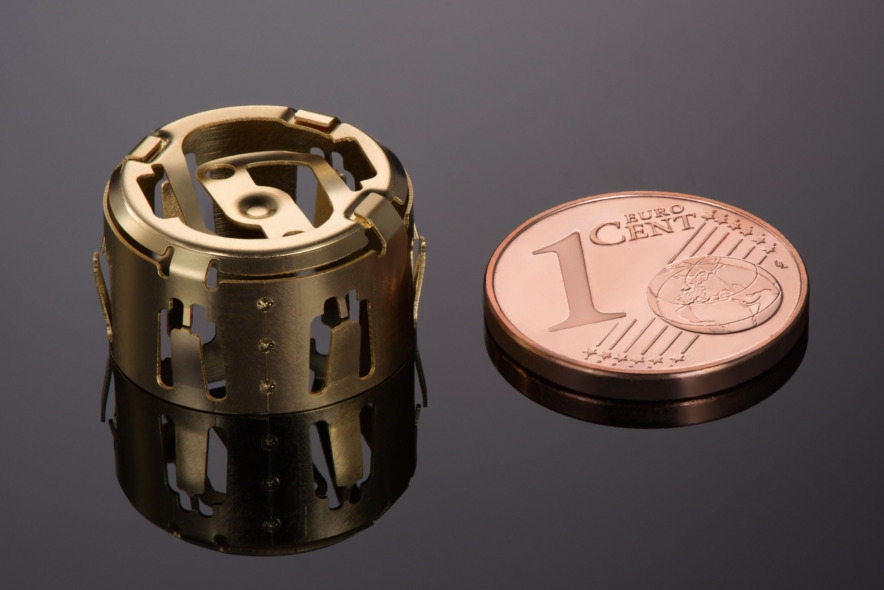 The speciality of HAIL-TEC is intricate contours such as these of a battery ­contact.

Renz had no misgivings about handling a machine of a new generation which could have had teething problems. “We gathered all the information we needed in advance and were convinced that we were dealing with a mature product.” These assumptions were not disappointed. The machine has been operating flawlessly for three years – only two minor software updates have so far been necessary.

HAIL-TEC has been impressed not only by the new drive strategy that achieves greater accuracy, but also by the compact arrangement and optimised integration of the ancillary equipment in minimal space.

However, the most persuasive selling point is undoubtedly the automatic wire threader that, in the event of wire breakage, inserts the wire perfectly into the kerf. This means the machine can also run overnight. “This dependability during unmanned shifts is invaluable,” says Hailfinger. Many workpieces are set up now in the evening, machined overnight and undergo further processing the following day. And should a failure ever occur, the team is notified by text message. This enables HAIL-TEC to minimise lost time, particularly when repairing tools.

Other factors in favour of the Mitsubishi Electric machine are its higher machining speed and the achieved quality of surface finish. While it used to take four cuts, one cut less is now needed on average. In addition, with the MV1200S the company is now able to produce punching tools for sandwich films that require a kerf of 1-2 µm. In these tools, parts of a laminate of adhesive films and a very hard and extremely thin metal foil (20 µm material thickness) are cut to shape.

Living and working in the countryside, all employees are keen to conserve energy and protect the environment. The company thus generates a large part of the energy it needs with solar cells. The company was therefore delighted that the Mitsubishi Electric MV1200S uses energy sparingly and is more efficient than its predecessor.

On the lookout for new challenges.

HAIL-TEC is always on the lookout for new challenges and has been observing innovative ideas, such as 3D printing, very closely. “To handle our everyday tasks effectively and follow up creative ideas, we need fully functional systems and machines that give us a free hand,” says Hailfinger with conviction. “Mitsubishi Electric is just such a supplier that also takes the needs of small companies seriously.”

Core business:
Punching and bending, laser ­machining, making of tools and fixtures for the ­medical, aerospace, textile and ­automotive sectors