Getting it right  first time

Walter Pottiez GmbH is one of the first users of the MV2400R Grand Tubular from Mitsubishi Electric. With its precision, the wire EDM system seamlessly continues the tradition of the broad range of machines that tool- and mouldmakers need for the efficient production of one-off parts.

Getting it right first time

Walter Pottiez GmbH is one of the first users of the MV2400R Grand Tubular from Mitsubishi Electric. With its precision, the wire EDM system seamlessly continues the tradition of the broad range of machines that tool- and mouldmakers need for the efficient production of one-off parts.
A batch size of one – a concept that instils fear in many metalworkers – is the norm at Walter Pottiez GmbH in Sulzfeld. In its work, the family company benefits from its shallow hierarchy and the resultant flexibility.

Qualified engineer Lars Kölle, who runs the business together with his wife Katja Pottiez-Kölle, places a gearing die on the table whose teeth have been cut on the MV2400R Grand Tubular. “Since we only produce one-offs, we have to be sure of getting it right first time when wire-cutting, as with all our other processes. At the same time, it’s a question of mastering this challenge at acceptable cost. This is why precision, for example, is more important than a high machining speed. Speed is of course also appreciated, but before we produce scrap, we prefer the machine to run a little longer instead.” Precision doesn’t of course ­exclude speed, as the Grand Tubular is renowned as much for its speed as for the precision of its corners and curves.

Lars Kölle points to the operator who has just clamped a workpiece. “To create the conditions for precise cuts, we have additionally opted for 3D ­machine set-up, enabling us to measure the position of the clamped component.” Apart from ­precision, Pottiez, who sees himself as a high-performance supplier of precision punching tools and precision punched parts and subcontracting work, demands high standards of the surface ­quality, reproducibility, parallelism and the contour accuracy of his products.

Do we detect a whiff of aerospace, cars and food in the air of the production shop, or it just our imagination? After all, the customers of the company that calls toolmaking its core competence come from these branches of industry along with the electrical, electronics and consumer durables industry. Pottiez mainly erodes ram and die sets as well as guide plates for tools. These are required for shaping stainless steel, aluminium and steel. Kölle takes another component out of a glass cabinet. “Along with heat exchangers and corrugated and tubular fins, this baffle, for instance, is one of the finished parts that customers make with our products. Thanks to the special punches that we develop for this purpose, we have achieved a unique position for ourselves on the German market.” The materials that Pottiez mainly processes are steel, metal-ceramic steels and cemented carbide. The dimensions range from tiny to the size of the entire clamping space. The machining times, he says, run from a few minutes to several days.

“Since the MV2400R Grand Tubular runs unmanned at night, we have to be able to depend on the wire-threading system.”

AJustifying his purchase of the MV2400R Grand Tubular and hence a change of supplier, Kölle stresses its attractive price/performance ratio and superior technical features. Also noteworthy were the competence of the Mitsubishi Electric staff and the good impression made by the way the company outwardly presents itself.
The most important technical features in Kölle’s view include the now fully digital ADVANCE PLUS CNC control and the new Intelligent AT automatic ­wire-threading system. 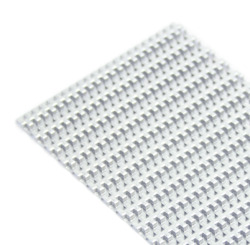 Baffle as a finished part for a customer

Justifying his purchase of the MV2400R Grand Tubular and hence a change of supplier, Kölle stresses its attractive price/performance ratio and superior technical features.

As the word suggests, this is an intelligent solution because it threads the wire reliably and quickly in any situation – in the dielectric, in the kerf or after interruptions in start-hole drilling. Even the height of the workpiece is no object. Kölle observes the process in the dielectric tank. “Although the machine contributes only about ten per cent of our tool output on average, it is in almost constant use. We operate seven days a week, around the clock. Since the MV2400R Grand Tubular runs unmanned at night, we have to be able to depend on the wire-threading system.” In view of this, Pottiez has also invested in a 20-kilo wire station and the equally optional mcAnywhere Contact function via which brief status ­messages are sent to selected mobile phone ­numbers. To be able to judge the drive concept using Tubular Shaft motors, it is still too early in the managing director’s view, having only commissioned the machine last autumn. Even so, ­Mitsubishi, he believes, has taken an exciting new approach in that the wear associated with con­ventional motor spindles does not arise on the linear motors employed with the Tubular Shaft direct drives. An additional advantage of the new solution is that the drive technology in the X, Y, U and V axes is responsible for totally cogging-free and extremely smooth and highly controllable movements. 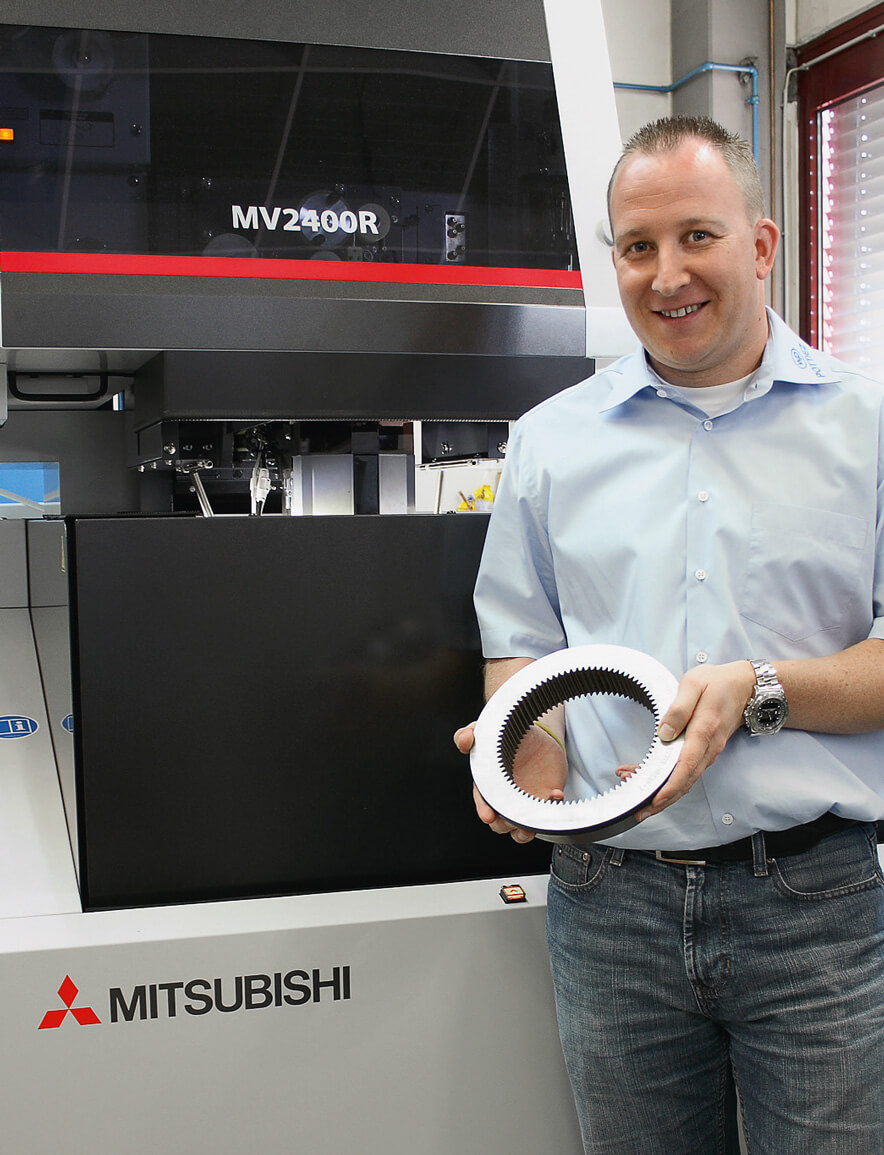 Lars Kölle, Managing Director of Walter Pottiez GmbH, with a gearing die whose teeth have been cut on the wire EDM system.

Faster to a new level

In the control sector, Mitsubishi Electric is also going new ways. Within the Optical Drive System, a fibre optic network now handles data interchange. This communicates considerably faster and more efficiently via optical waveguides between the ADVANCE PLUS CNC control, servo amplifiers and Tubular Shaft direct drives and thus facilitates even greater machining precision. Apart from this, ­Mitsubishi Electric has improved the user-friendliness over the old Advance CNC control.

Kölle goes to an external workstation. “This is where we program the control. The data are then transmitted with the aid of a postprocessor.” He points out another advantage of the MV2400R Grand Tubular as far as operation is concerned. “Anyone confronted with wire EDM for the first time achieves a higher standard of operation on this new machine faster than someone who is used to a different model and first has to re-adjust to the new machine.” 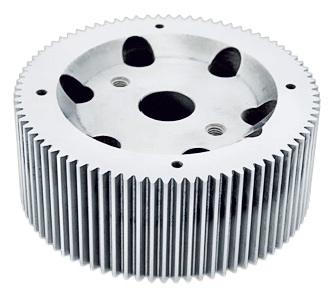 On top of all this, the MV2400R Grand Tubular achieves high energy efficiency as a result of the Optical Drive System combined with the Tubular Shaft motors. How much energy he saves is ­impossible to calculate, says Kölle, because he only machines one-offs. It inevitably reduces his energy consumption as the control disables unneeded functions and the machine switches as required from sleep mode to stand-by.

If he wants to work out whether his operating costs are lower than with the old machine, he again runs up against the problem of batch size. Kölle shrugs his shoulders. “Although the re­placement parts from Mitsubishi Electric are cheaper than from our former supplier, what effect it has on our machine hour rate is difficult to say because we don’t produce any series.”

Glance beyond the immediate region

What is clear, however, is that Pottiez has broadened its base for single-unit production by ­investing in the MV2400R Grand Tubular. Kölle stops at an assembly table. “This unique piece
of equipment is a fine example of how we convert even our own ideas into one-off items. This ­assembly table, which is unavailable for purchase on the market, is accessible from all sides and thus makes tool assembly easier.”

The company also demonstrates creativity in the marketing sector, having extended its feelers well beyond the immediate region. In 2009, Pottiez opened a sales office for North America in Atlanta, Georgia and has since set up a joint venture there with a partner for the production of heat exchanger components. 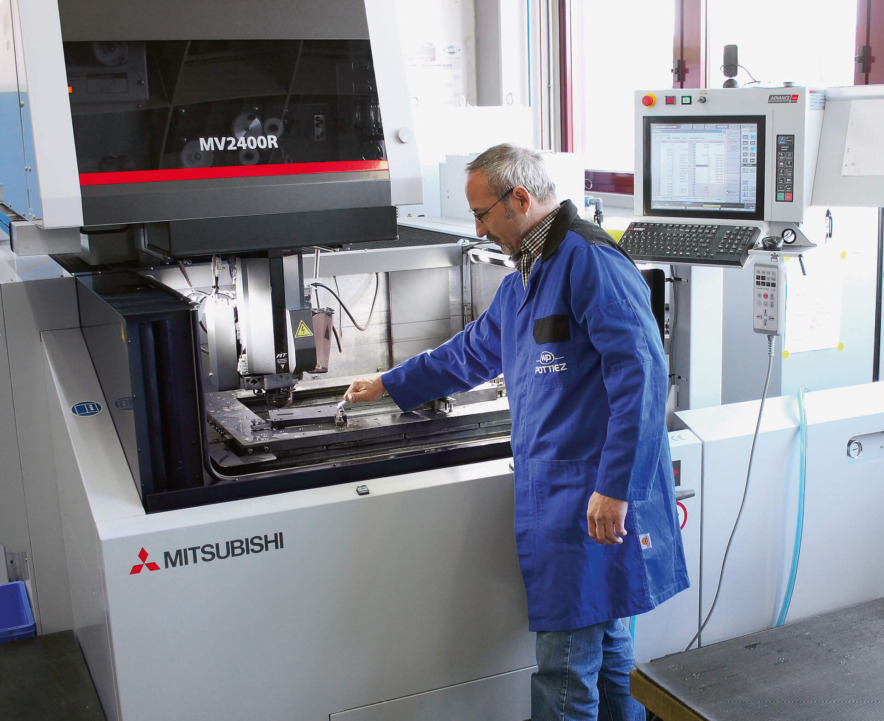 How would you describe in a sentence what your company does?
We design, build and test high-precision progressive compound tools. This is joined by the punching of parts under subcontract for a variety of sectors of industry.
How did you earn your first money?
In my parents’ repair shop for farming machinery and other items of ­equipment.
What motivates you?
At work, my interest in technology.
Where do you see your company in five years’ time?
We have a strong international presence and want to develop further in this area.
What was your biggest business success?
Our foreign activities in the USA. We had customers there before we opened our sales office and were able to build on this foundation.
What’s your favourite way to relax?
Spending time with the family or playing a round of golf.
What attributes do you value most in other people?
Honesty.
What faults in other people do you find easiest to forgive?
I can forgive anyone who is willing to honestly admit a mistake.
How would you briefly describe your work to someone with no technical knowledge?
We produce tools with which shapes are produced from flat materials. 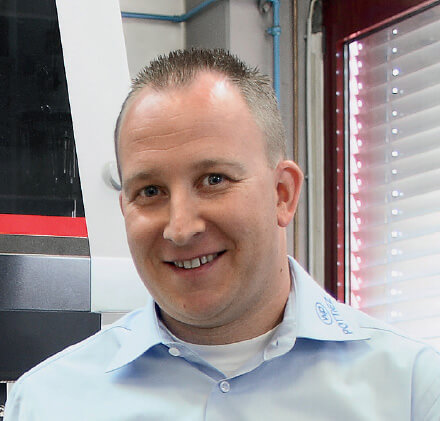