In their bid for quality and reliability, MT Aerospace AG banks on an FA20-S Advance from Mitsubishi Electric in its development workshop. 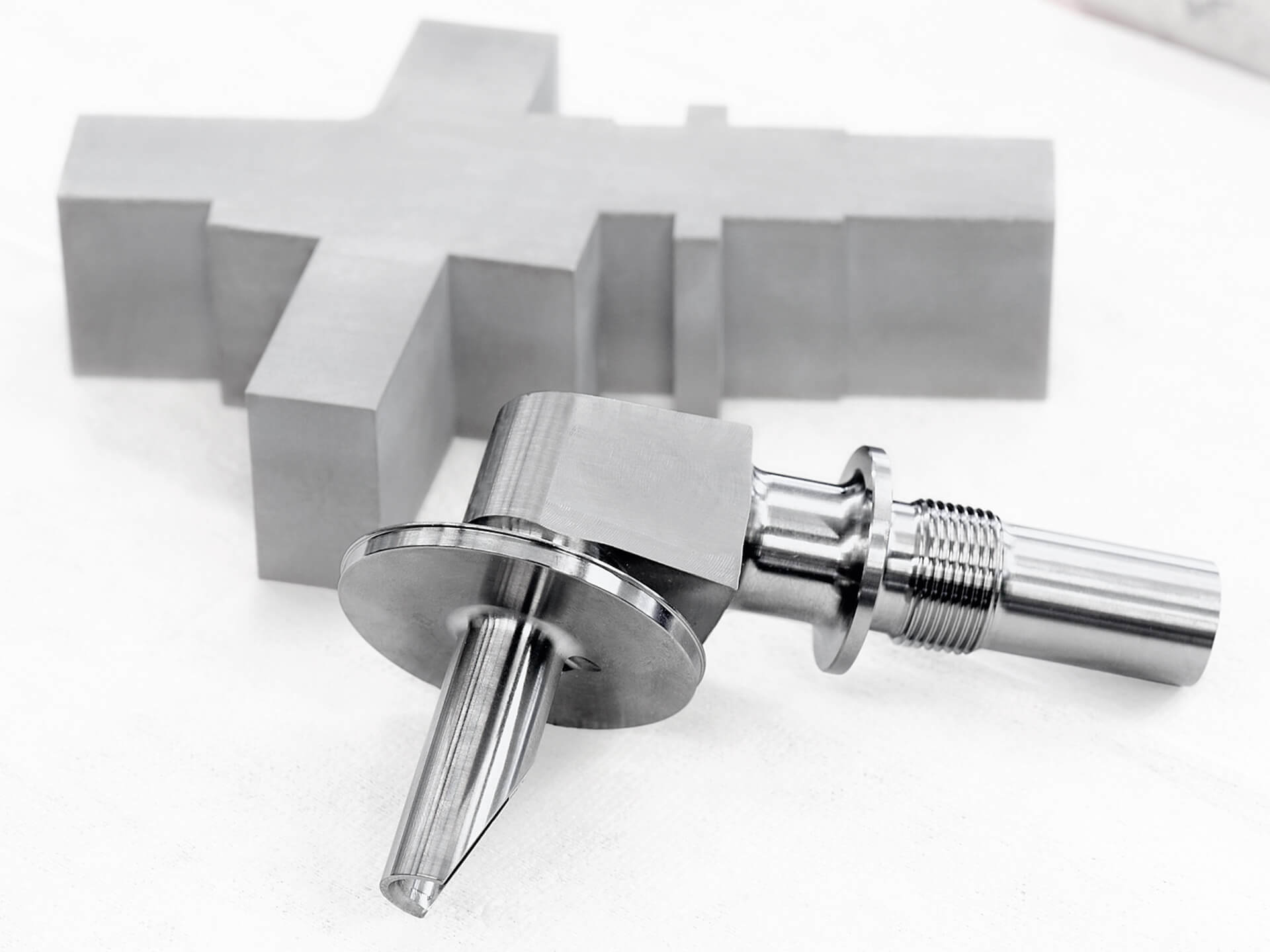 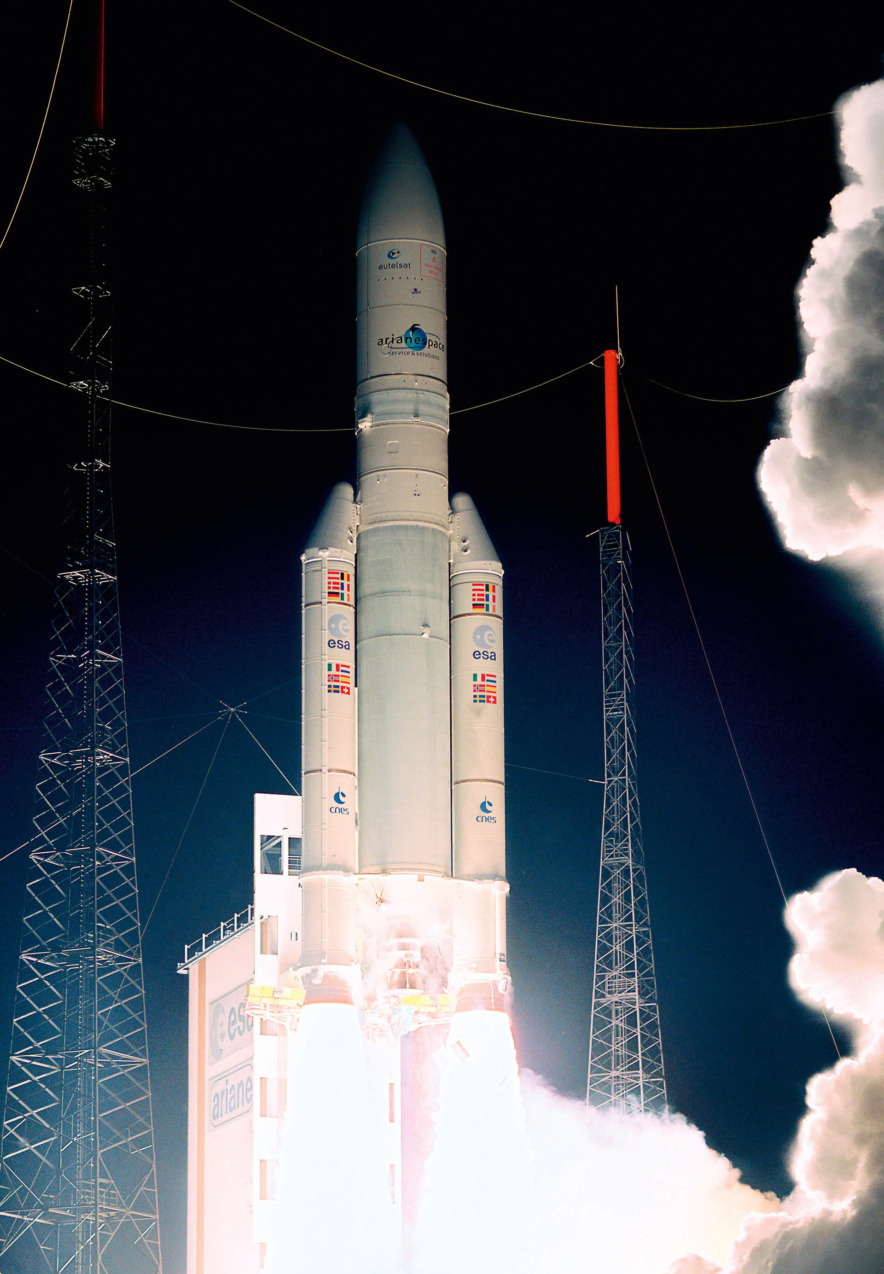 This booster segment consists of three separate cylinders that are joined together at MT Aerospace (see image opposite).

Half as long as a football pitch and weighing as much as 750 small cars – the attributes of the Ariane 5 European launcher rocket are quite staggering. Thrust of 13,000 kilonewtons is required just to get the missile off the ground. By comparison, Concorde with its afterburners achieved only about a twentieth of this thrust. On behalf of the European Space Agency (ESA), companies of all twelve member states are involved in the development and construction
of the Ariane 5. Outside France, MT Aerospace AG with a share of ten per cent is the biggest supplier of hardware to the programme. Booster cases and fuel tanks are the core business of the space flight specialists in Augsburg, Germany.

Strict safety guidelines and the costintensive development and manufacture of rocket components impose tough production requirements on MT Aerospace. The components that leave the plant therefore exhibit “superlative quality and maximum reliability”, as Michael Servo, the company’s production manager, puts it. With its booster cases, tanks and bulkheads, MT Aero­space supplies components of existential importance for the Ariane 5 launcher.

Ariane 5 propels satellites into orbit and spacecraft to the international space station (ISS). A large portion of the launcher rocket is discarded short­ly after launch and falls into the sea – the 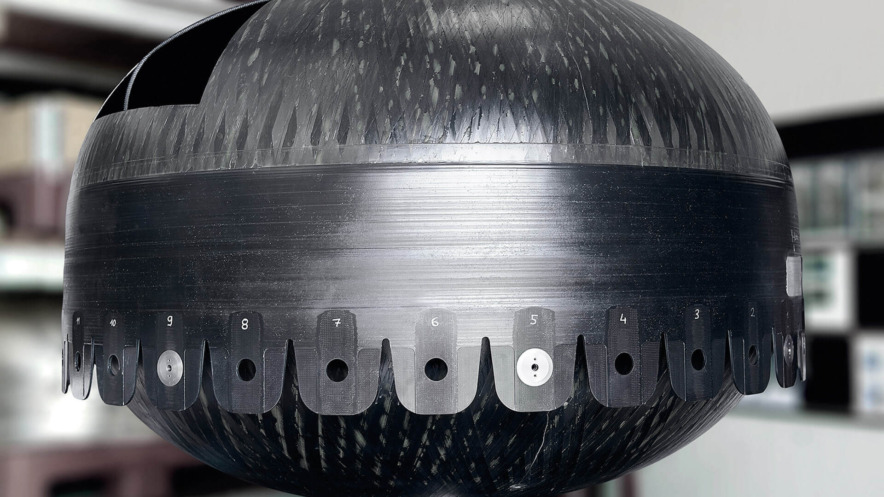 Tanks for the aerospace industry are also part of MT Aerospace AG’s portfolio.

booster, for example, after a good two minutes. This means that the products manufactured by MT Aerospace have on the one hand a very short life-cycle. On the other hand, the components are exposed to extreme stressing during these few minutes. It is not without good reason that Michael Servo therefore underlines MT Aerospace’s responsibility for setting extra-high quality standards: “A malfunction due to quality shortcomings would inevitably be a disaster – firstly for Ariane 5 project business and secondly and particularly for our own reputation.”

MT Aerospace satisfies the exacting technical requirements with exhaustive quality control. In practice, this means that specimens are taken from each supplied batch of each material and specially processed to prepare them for stringent testing. This can involve mechanical load tests, analyses of dynamic vibration or tests to determine how components behave under pressure and exposed to strong temperature fluctuations. “In quality control, we replicate every situation that our components can encounter in practice on the rocket,” Michael Servo explains.

Specimen preparation is one of the tasks of the development workshop where the 20 employees work to the same strict guidelines as in pro­duction. Materials difficult to machine like steel alloys and titanium and small piece numbers call for ultra-modern production technologies and maximum flexibility. Last year, time was up for a 15-year-old wire EDM machine. The se­lected replacement was a FA20-S Advance from Mitsubishi Electric. “Its excellent price-performance ratio made all the difference,” recalls Sixtus Metz­ger, head of the development workshop.

Since its installation, the FA20-S Advance has been in almost continuous operation, which is possible thanks to automatic wire threading. “We can set up the machine in the afternoon, let it run unsupervised at night and in the morning all we have to do is separate the finished parts,” says Sixtus Metzger describing the new procedure, before stressing: “This automated operation gives staff in the development workshop greater scope and offers us extra flexibility.” 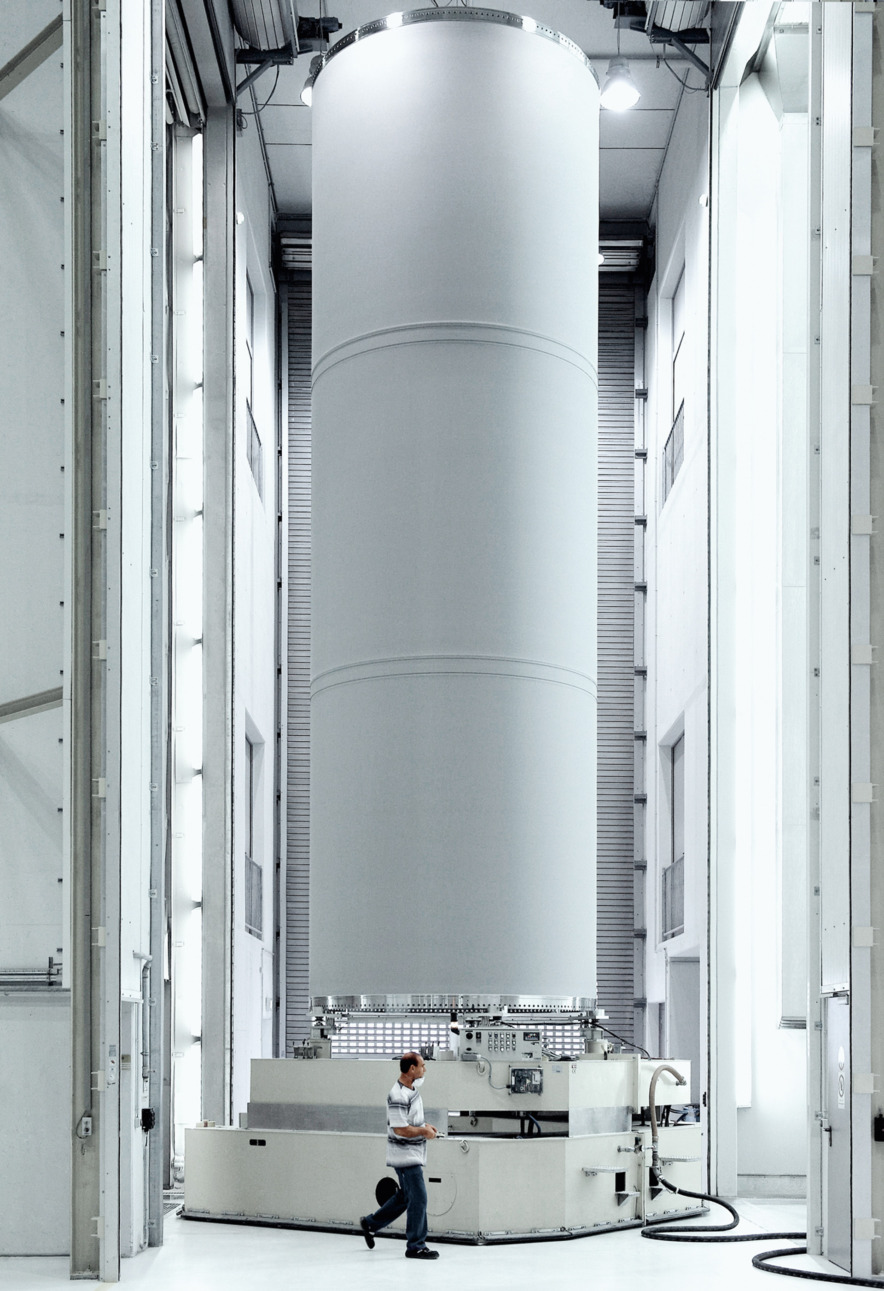 Machining on a grand scale: The boosters of Ariane 5 have a diameter of about 3 m and a total height of 25 m.

Another benefit of the switch to hypermodern technology in the wire-cut EDM sector is the speed of the FA20-S Advance. Whereas many parts were conventionally machined in the past, our employees are now going new ways, as Sixtus Metzger explains: “Our colleagues are coming up increasingly often with ideas of what could be eroded instead of elaborately milled.” The advantages of wire-cut EDM in his view are its higher productivity overall and lower costs compared to milling in that tooling costs have been largely eliminated. 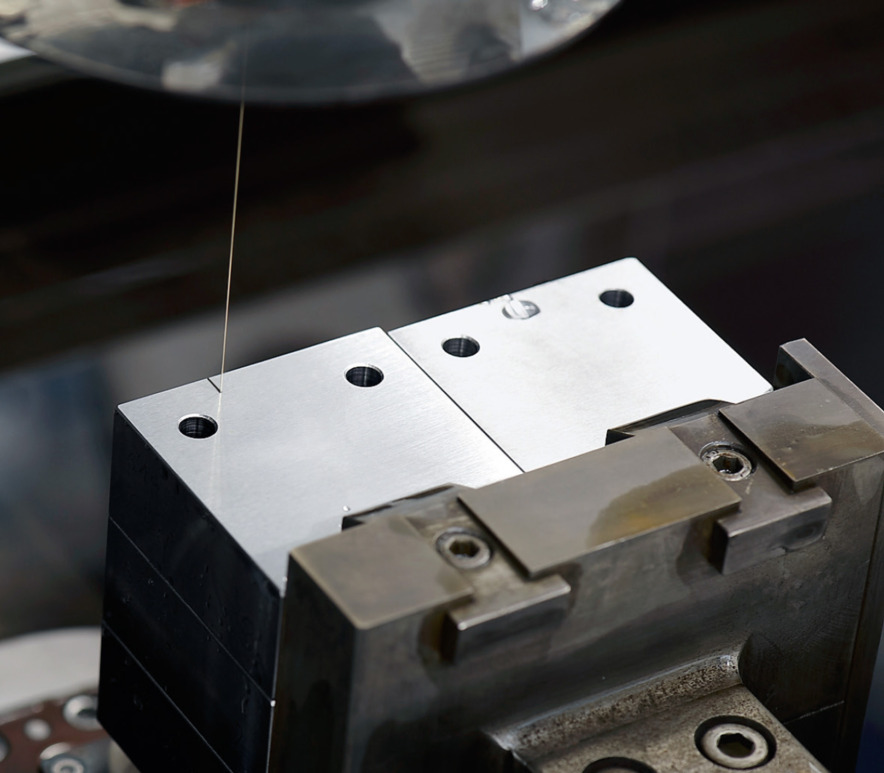 Sophisticated materials such as special steel alloys, call for the use of a high-performance wire erosion machine. 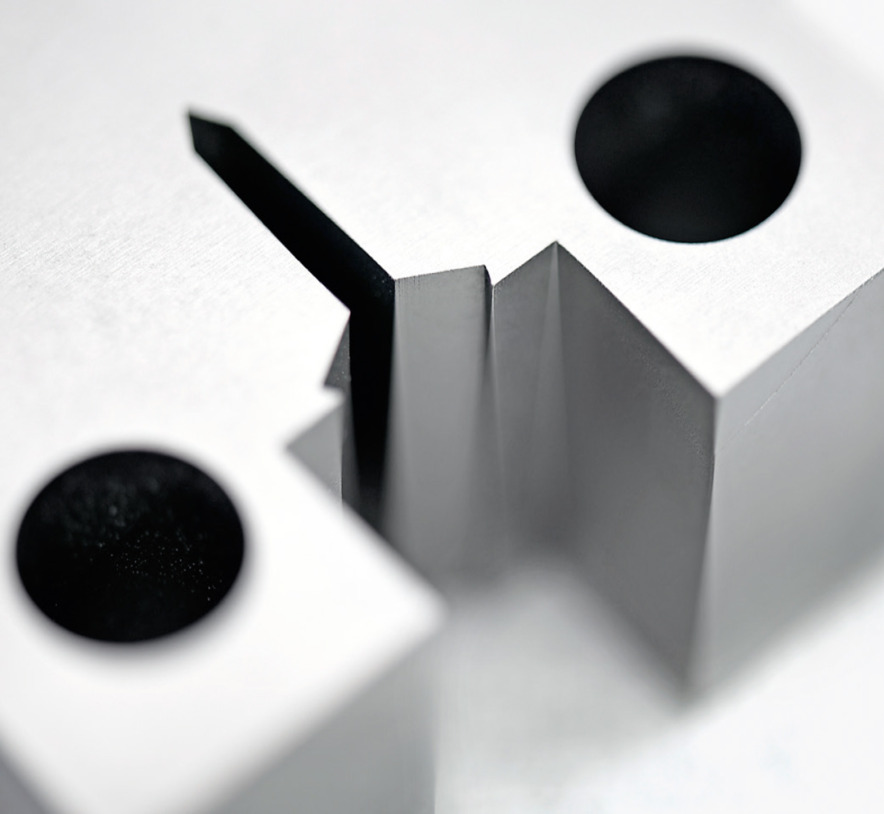 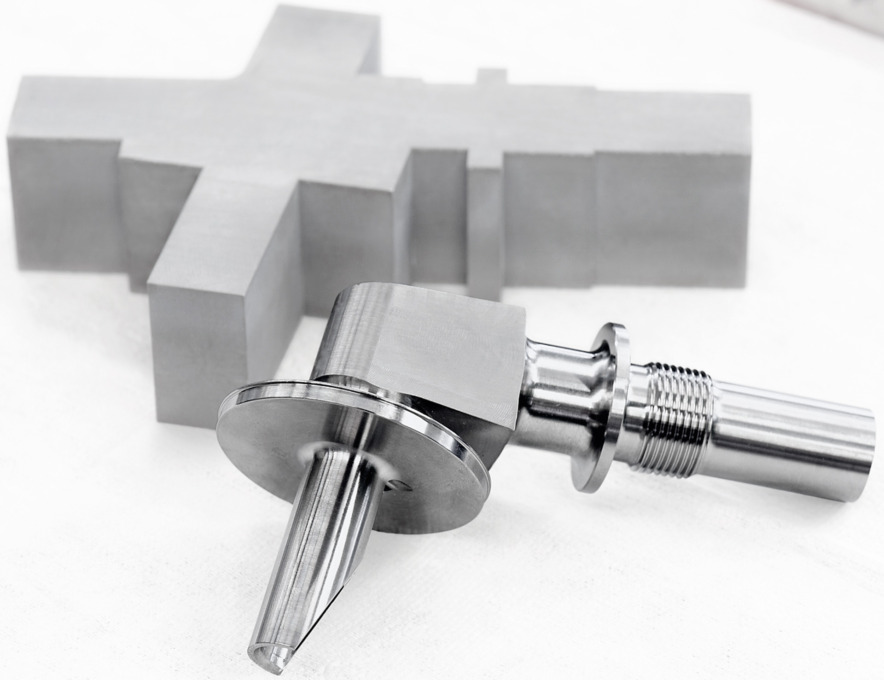 Before and after: The many machining steps for the component are preceded by wire-cutting.

Well equipped for the future of space flight

The big changeover from an antiquated machine to the very latest control technology was quickly accomplished after two training sessions given by Mitsubishi Electric. The employees soon came to appreciate the new system and enjoy the convenience of PC-supported programming. “We still receive drawings, but it’s now child’s play to replicate them on the PC. The machine program is then produced automatically more or less at the press of a button,” says the head of the development workshop.

In the development workshop, it’s not productivity that counts above all else. In fact, the challenge involves flexibly producing a large diversity of parts from a huge range of materials – and this with great reliability and precision. In this connection, Sixtus Metzger
sees the special value of the FA20-S Ad­vance for his department: “Wire erosion has developed into a key technology for us. It has already demonstrated its value and will have paid for itself within the foreseeable future.”

Both Sixtus Metzger and Michael Servo are convinced that the purchase of the new wire EDM machine will continue to pay off, as accompanying specimen preparation depends directly on tank and booster production. MT Aerospace benefits here from a comparably stable aeronautical and very stable space industry. To be more precise, production of the rocket components has a longterm schedule and is assured until 2014. At the same time, the company has long ceased to be purely a component supplier, because with its technological innovations MT Aerospace is also going a long way towards boosting the efficiency of the Ariane programme.

„Wire erosion has developed into a key technology for us. It has already demonstrated its value and will have paid for itself within the foreseeable future“

Number of employees:
20 in the development workshop, 700 overall

How would you describe in a sentence what your company does?
Booster casings, large tank components, structures for space flight, Ariane 5 and components for aeronautics.
How did you earn your first money?
Holiday job.
What motivates you?
Our wonderful team of staff and my fascination for space flight.
What’s different about how you do things now, compared to five years ago?
I’m calmer.
Where do you see your company in five years?
Systems leader for the new Ariane 5 upper stage.
What was your biggest business success?
Putting together a team of staff that works with great enthusiasm, enjoyment, responsibility and outstanding quality.
What’s your favourite way to relax?
With physical exercise in my free time.
What attributes do you value most in other people?
Fairness.
How would you briefly describe your occupation to someone with no technical knowledge?
I have the good fortune to be able to work in the most fantastic branch of technology, space flight. 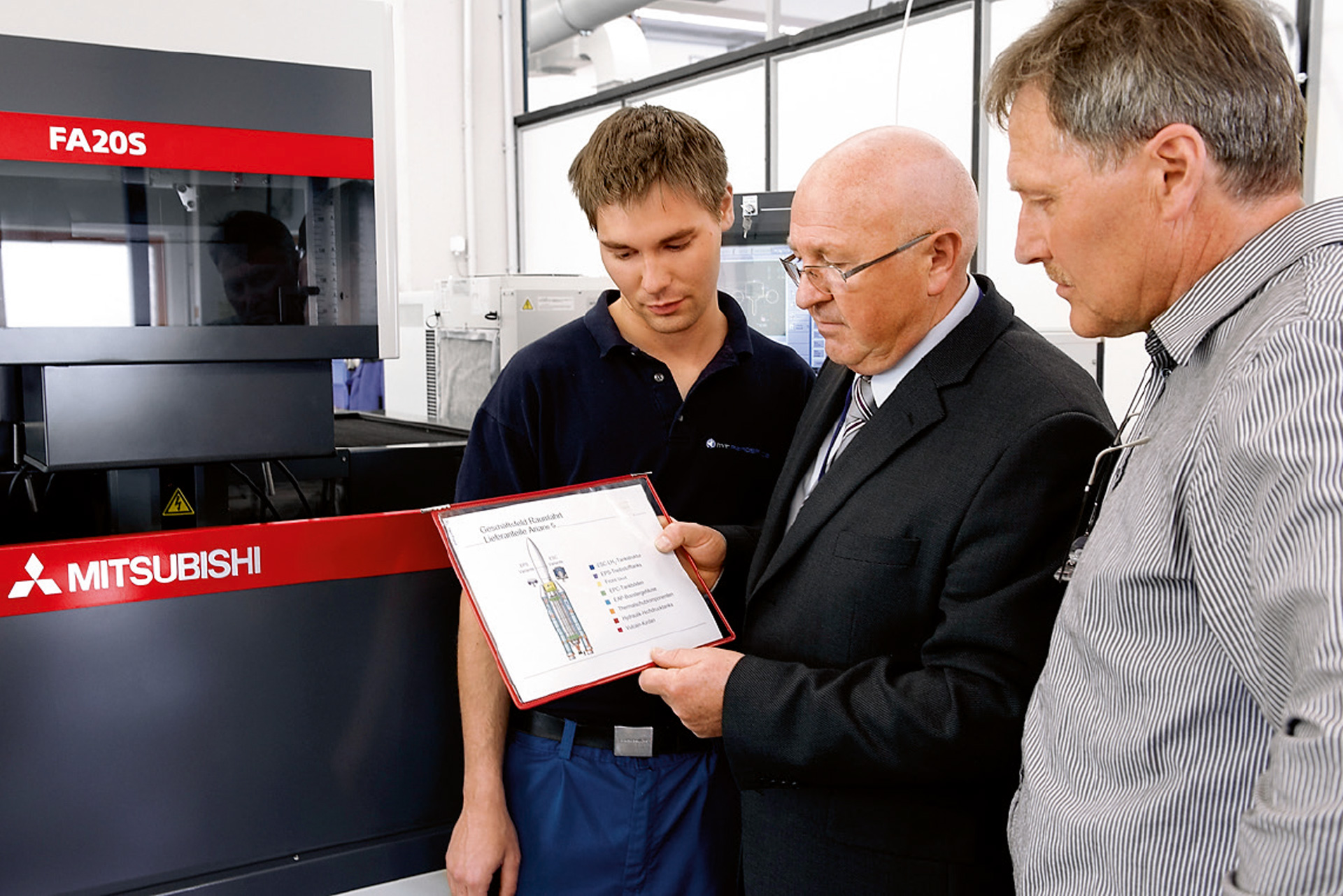