The use of virtual technologies ensures rapid commissioning, high transparency and process reliability. This enhances production flexibility and boosts competitiveness. In the course of the digital transformation borne by ‘Industry 4.0’, the digital twin is initiating a paradigm shift in production and delivering significant added value. The digital twin is a custom-made, virtual one-off and constitutes the counterpart to a real object. 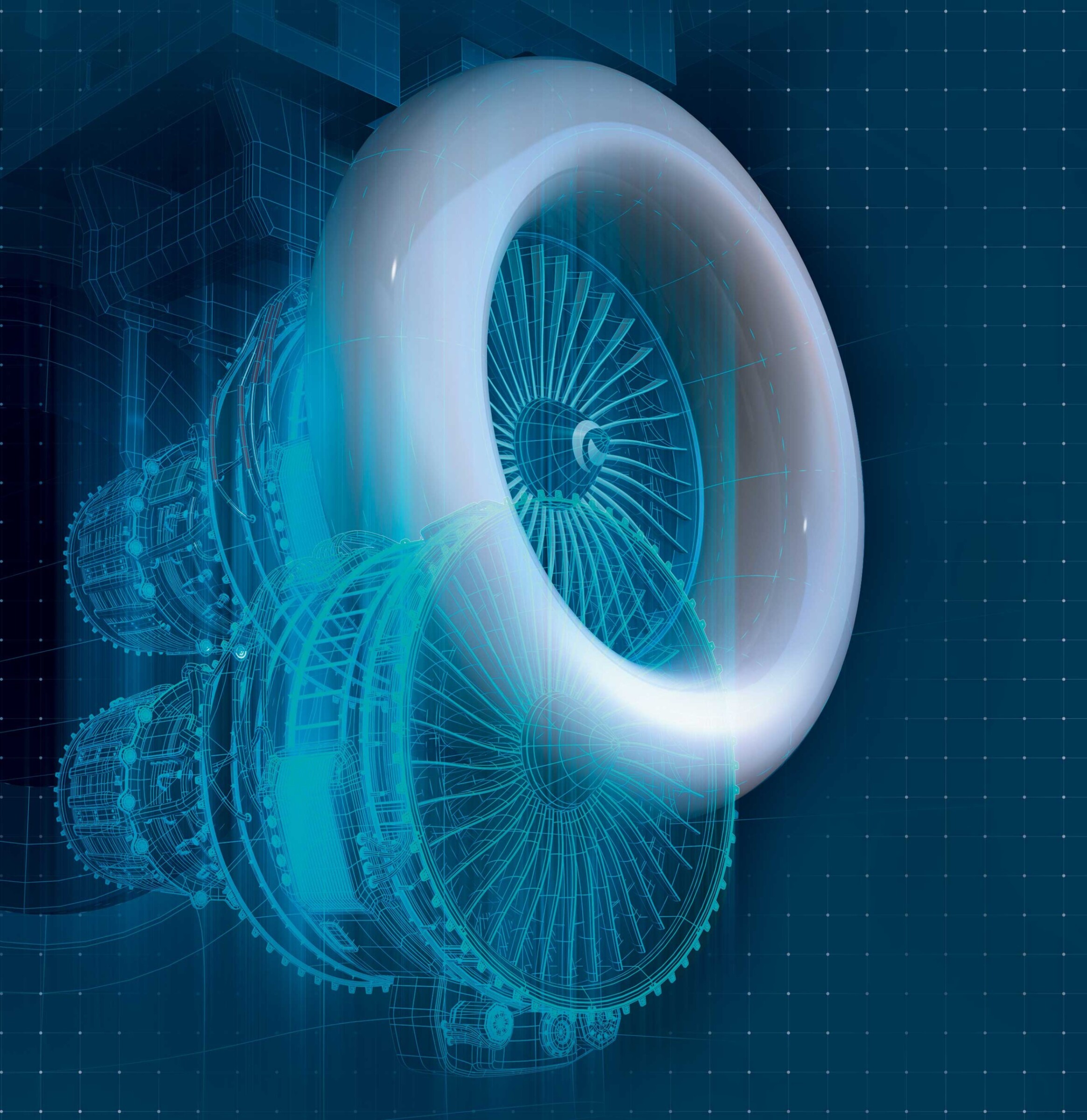 The use of virtual technologies ensures rapid commissioning, high transparency and process reliability. This enhances production flexibility and boosts competitiveness. In the course of the digital transformation borne by ‘Industry 4.0’, the digital twin is initiating a paradigm shift in production and delivering significant added value. The digital twin is a custom-made, virtual one-off and constitutes the counterpart to a real object. A multitude of digital data and their interrelationships as well as specific algorithms are used for the precise functional representation of a potential or already existing object. This can be a product, production process, installation – such as a machine tool – or a combination of production islands through to a complete production plant. The digital twin is thus the methodological approach to optimising a real object across all phases of the life-cycle, starting with ‘time-to-market’ and extending to efficient product recycling and system retrofits.

There’s no such thing as a digital twin off the peg.

It would be too restrictive to confine the term ‘digital twin’ to an unambiguous definition. The varying requirements and individual viewpoints along with the multitude of possible applications would be too limiting for this relatively young technology trend. This lack of clarity therefore leaves room for discussion, expansion and application-oriented evolution. Nevertheless, there is a common understanding of the digital twin in that it always represents a digital replica extending to a 3D model capable of simulating a real object. It contains data, details such as performance characteristics and properties and their interactions with each other. In addition, there are algorithms, behavioural and simulation models for the most appropriate representation of the real object in its specific context. For example, certain behavioural patterns can be derived for a planned or already existing object from the machining cycles of a CNC machining centre. 3D visualisations make it easier for users to gain an understanding of a machine’s ‘inner workings’ – of a drive spindle, for example. The model thus allows the designer to be extremely flexible in sounding out the scope for adaptation to individual requirements.

A digital twin is reserved not only for developers, but is also available on dashboards for plant and works managers and on mobile devices for service personnel. In terms of their needs, these users can make use of a specific set of tools from the shared digital modular system, the digital twin in question. For example, a design engineer tests the performance of a newly developed machine not on the realised prototype, but in the digital development environment. Collisions of a tool with the machine body, for example, can be ruled out from the outset. Similarly, commissioning already takes place in virtual space. On the basis of prior simulations and behavioural analyses, those responsible receive early notifications of possible malfunctions on their control panels or machine displays in the later, real operating situation. This can be an anticipated material bottleneck, foreseeable wear of a tool, or declining product quality. On the basis of the available behavioural analyses, preventive maintenance with servicing and maintenance plans is advisable. 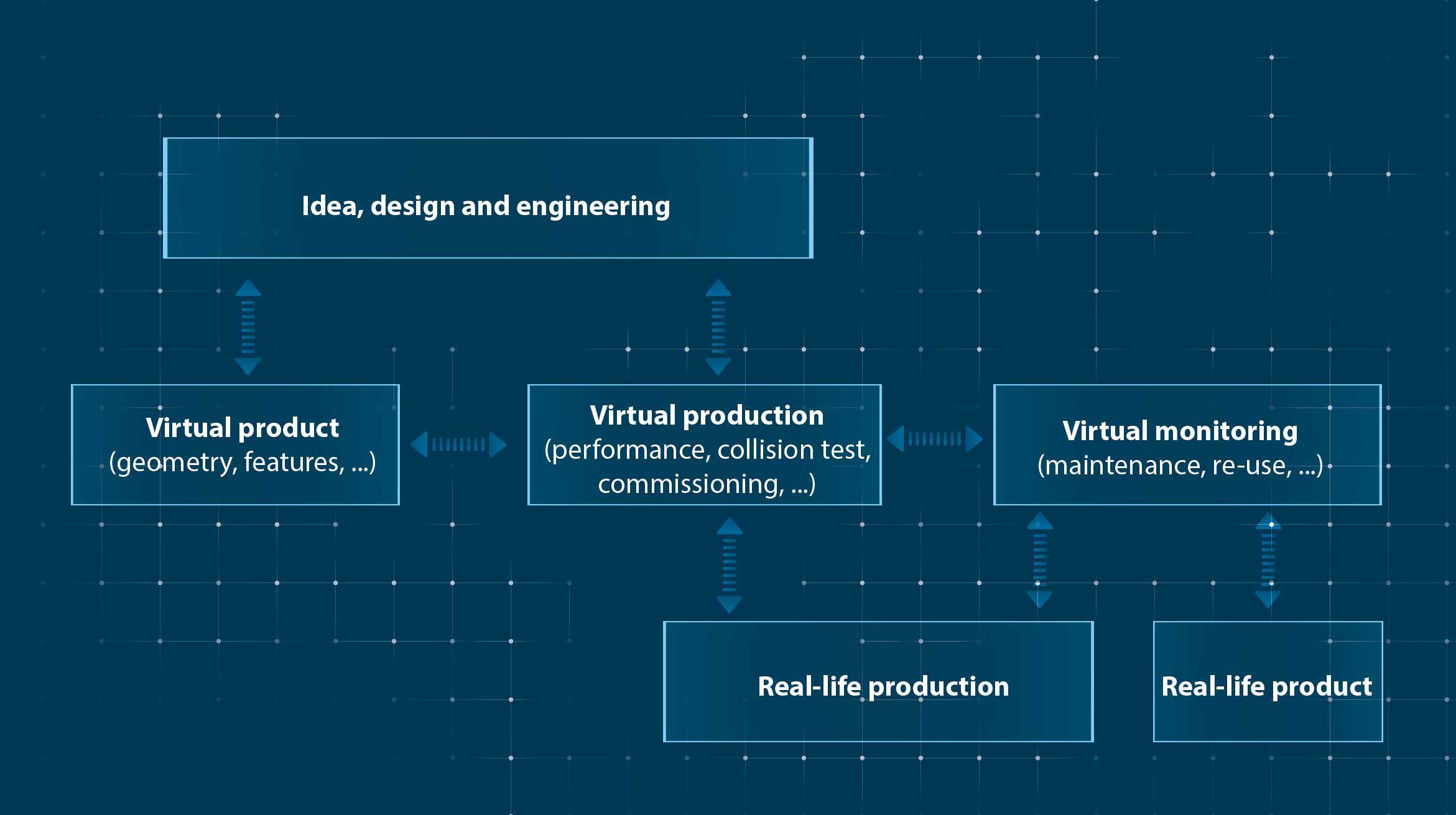 Neuralgic areas or critical points have to be tracked down and improved. On an already existing real object, these can be clearly revealed in the post-modelling or even at the design stage through simulation. Starting from the product, a clear focus is placed on what is usually a multi-stage production process. All relevant process parameters have to be recorded exactly. To complete the process, the data now available via sensors also have to be included. These are made available by such smart devices as digital servo amplifiers, PLC controllers and robots. The aggregation of process data helps to consolidate and condense the resultant large volume of data. This is done by accounting for their mutual interactions, e.g. in terms of performance characteristics, and enables the process to be depicted in IT models capable of simulation. But beyond this, it is worthwhile analysing the entire value chain in order to identify potential for improvement and thus maximise optimisation. To make a comparative assessment possible, the definition of the relevant key performance data is advisable. This information is available in real time throughout the entire value creation process. If deviations occur, a targeted response can be initiated immediately.

The achievement of such objectives requires the active processing of what are always current and high-quality data. Against this background, an enormously large volume of data is generated. Established IT systems such as data pools like big data and clouds, product life-cycle management (PLM), ERP for the provision of product master data, the MES system for process data, the CAD system for 3D visualisation, and the CAD/CAM system for determining NC runtimes can be used for recording, processing, administration and transfer. A major development step in the context of Industry 4.0 and the IIoT efforts (Industrial Internet of Things) aims to create a standardised, open platform. On this basis, it is possible to define uniform interfaces for interaction between digital twins. The product, tool and machine can be brought into interaction and analysed. Cross-manufacturer, uniform digital descriptions facilitate this, enabling a single user to use several digital twins from different manufacturers that communicate bidirectionally with each other. In addition, the aim is to achieve continuity so that individual digital twins along the respective value chains can be combined to form a so-called digital thread. Such a common thread is used for real-time evaluations, and corrections are made in interaction between digital twins and real twins with the aim of achieving the possible optimum.

On no account does the digital twin have to be the ‘first-born’. It can also be transferred from the real world to the digital world. The scale of the digital image being developed depends on the demarcation of functionalities, properties and the degree of complexity. This step only makes sense, of course, if there is an appropriate economic interest. Such considerations may arise, for example, if an investment in machinery fails to yield the expected payback. Here, the digital twin is suitable for effective analysis or causal research and for testing alternative solutions via simulation in the virtual world. It can also be used to deal with repeated faulty production or unforeseen machine downtimes, so that appropriate targeted measures can be taken in real operations.

Other promising application scenarios arise, for example, when a machine tool manufacturer launches a new machine generation and has a corresponding digital twin. This can act as a digital master and take up the machines on the market as a digital fleet – provided the users of these installed machines agree to interact with the manufacturer’s digital master. This approach can result in a powerful economic impact with great efficiency for all parties involved. In individual cases, the manufacturer’s service technicians can, for example, obtain an overview of a malfunction and propose suitable measures. In addition, it is possible for the manufacturer to evaluate certain patterns of machine behaviour from overall customer evaluations and contribute to improvements.

A milestone in the world of production.

The technology of the digital twin represents a major milestone in the production world. The constant evaluation of processes yields continuous learning processes and ever better models, hypotheses and forecasts. But despite all the euphoria and possible self-regulating mechanisms, it is, in terms of automatic correction, first of all a highly efficient, intelligent IT tool in networked applications. It is up to the decision-makers to draw the right conclusions from this and to implement their findings. In general, the use of the digital twin must not be limited to the design, commissioning and production stages, but can also include other areas such as the control of business management processes, spare parts procurement, materials management and service, as well as staff training.