Well on the way to the top. Toolmaking benefits from precision wire erosion for a ­superlative surface finish

Jehle AG in Etzgen, Switzerland, produces stamped and formed parts as well as fully assembled components in medium to large series for the automotive, electrical and construction industries all over the world. 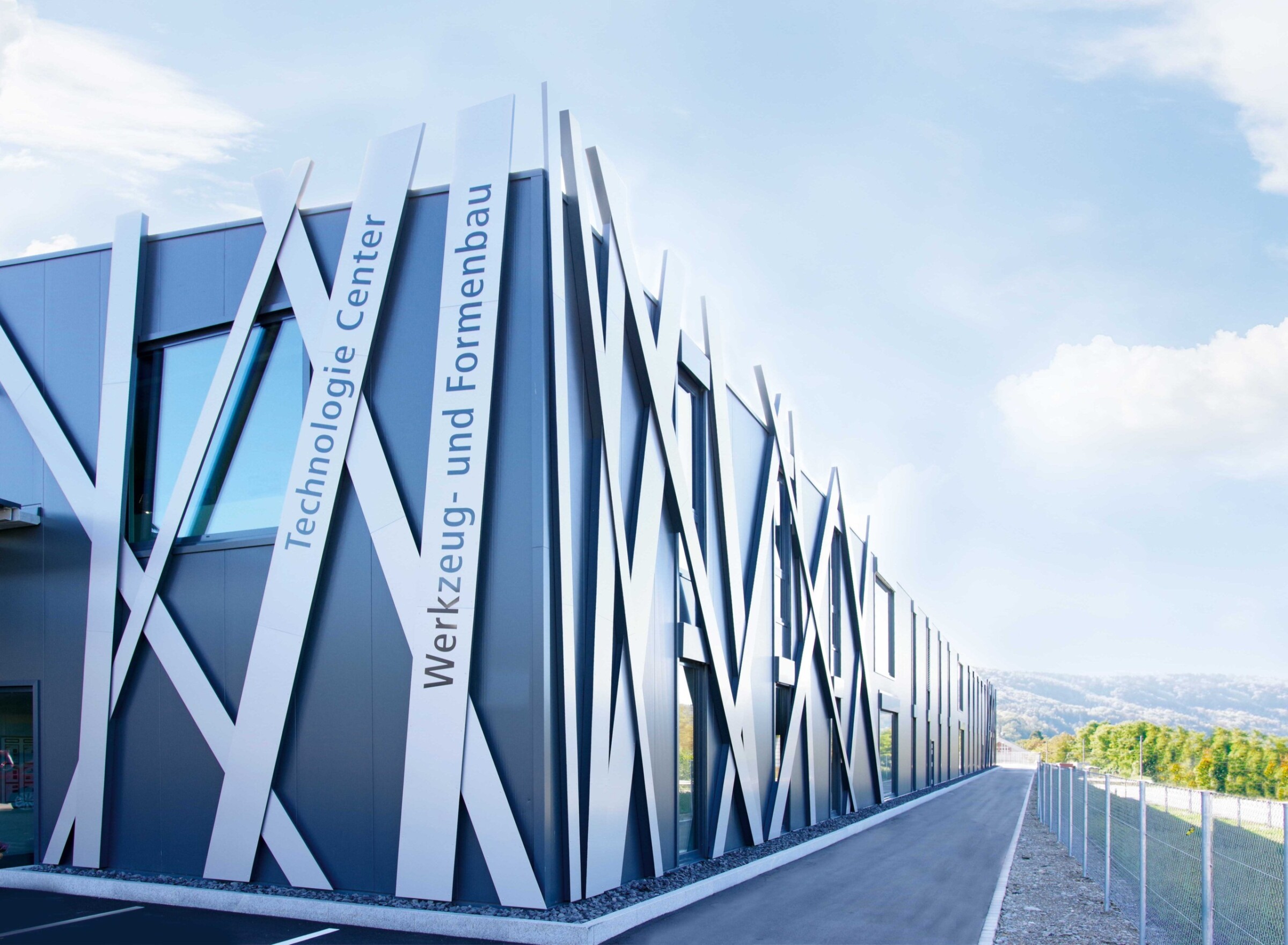 Well on the way to the top

Jehle AG in Etzgen, Switzerland, produces stamped and formed parts as well as fully assembled components in medium to large series for the automotive, electrical and construction industries all over the world. The company’s own, recently extensively modernised toolmaking department has made a significant contribution to its success. Here, MP2400 Connect wire EDM systems ensure faster throughput and flexible, cost-effective production.

The new technology centre in Etzgen

The specialists in Etzgen develop, design and make stamping and forming tools, not only for their own production facilities, but also as subcontractors for external customers. The spectrum ranges from simple stamping, deep-drawing and bending tools to highly complex progressive dies, transfer tools and injection moulds. In addition, the tool- and mouldmakers in Etzgen produce tools with special functions, such as integrated tapping or devices for feeding and riveting bolts. They also make individual fixtures and gauges.

With their ultra-modern technology centre for tool- and mouldmaking, which was enlarged a few months ago, they want to move a step closer to their goal of becoming one of the top toolmakers in Europe. Helmut Sautermeister, head of tool- and mouldmaking, explains: “We are one of the few companies to offer comprehensive services, from the idea through to the tested and adjusted tool.” For example, the Swiss experts advise the customer on the possible production of a component right from the concept stage. Together with their clients, they optimise not only the geometry of the components but also the production steps and the forming tools designed for them. In doing so, they benefit from the extensive experience gained from their own series production, part of which is located directly adjacent to the technology centre in Etzgen. This enables them to find the best possible strategies for the highly cost-effective and reliable production of components in large series.

Using modern CAD systems and CAE software, the specialists design and dimension the forming tools and injection moulds and are able to simulate production processes and virtually check and optimise tool function. They then design the required parts and program the production processes. When making and building complex forming tools, the experts in Etzgen benefit from their very high vertical integration. This ranges from sawing the blanks and all machining technologies to heat and surface treatment. In addition, the tools are assembled, adjusted and tested at Jehle to ensure their reliable function. “It is this high level of vertical integration in particular that ensures our international recognition as a leading toolmaker. With our high-quality and dependable forming tools, we contribute significantly to ensuring that production companies – like our own series production – operate efficiently and profitably,” says Sautermeister. 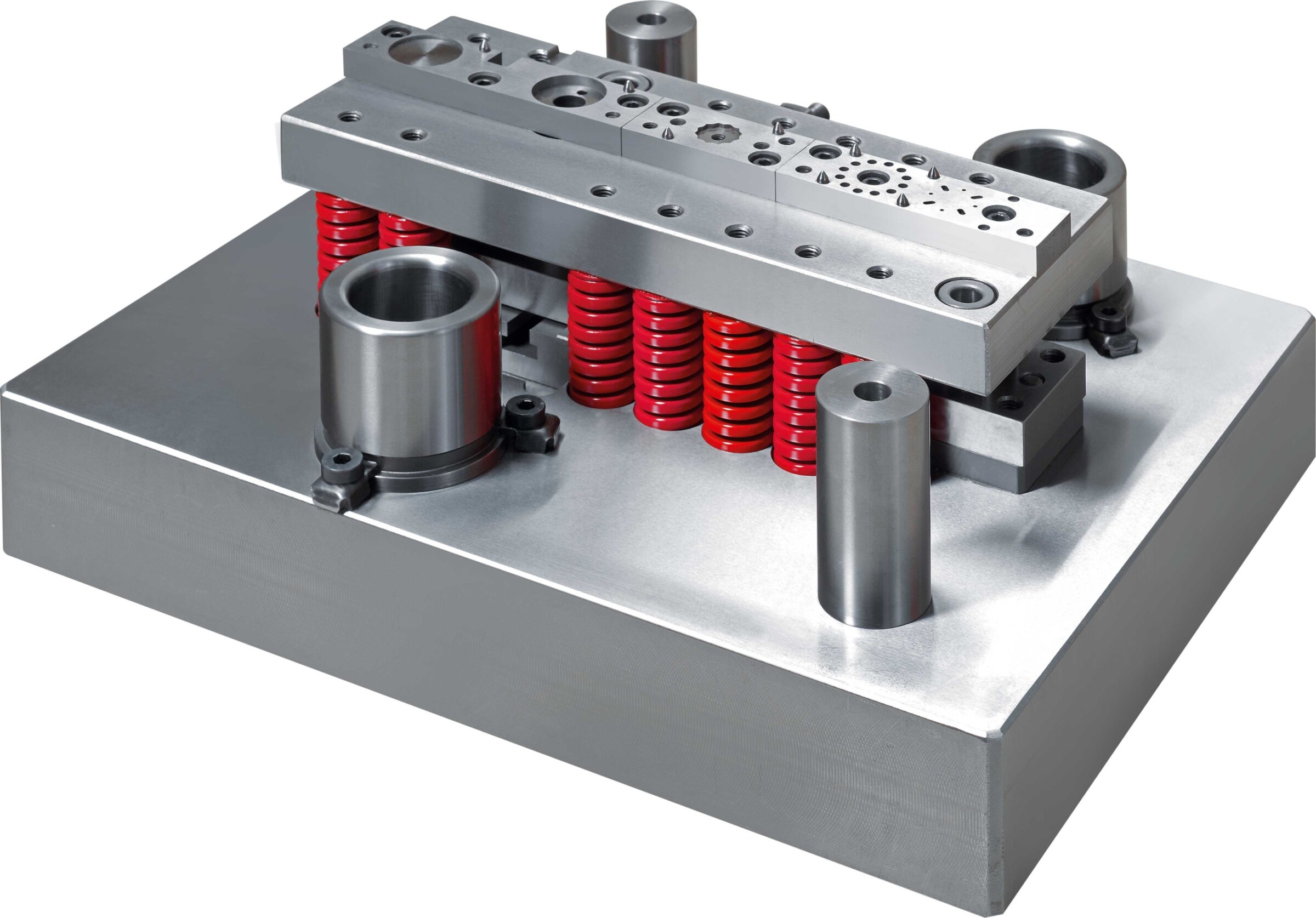 Success due to high vertical integration.

Its close cooperation with its own adjacent production facility has proven to be particularly useful. From there the toolmakers in the technology centre receive direct feedback on the function, reliability and service life of the stamping and forming tools. Other services provided by the toolmaking department at Jehle AG naturally include repairing tools and rehabilitating them for series production as quickly as possible.

At the recently built and opened technology centre in Etzgen, the experts have largely optimised their entire production sequences and processes. This includes the digitisation of numerous internal processes from design and order planning, through component machining and post-treatment to the assembly, adjustment and acceptance of complete tools, Sautermeister explains. The toolmakers have also significantly improved internal materials flow. The components undergoing production now pass almost linearly through all the necessary process stations from the blank and the ready-to-install component through to the assembly of the complete tool. “On moving into the new building, we invested in additional advanced machines and also replaced some of the tried-and-tested ones,” Sautermeister explains. In this connection, Jehle AG also purchased two MP2400 Connect wire EDM systems from Mitsubishi Electric, choosing this manufacturer because of their excellent experience gained to date. The Swiss toolmakers appreciate the reliable operation of the machines and the professional service of the Japanese manufacturer and its European subsidiaries, which is always available at short notice. 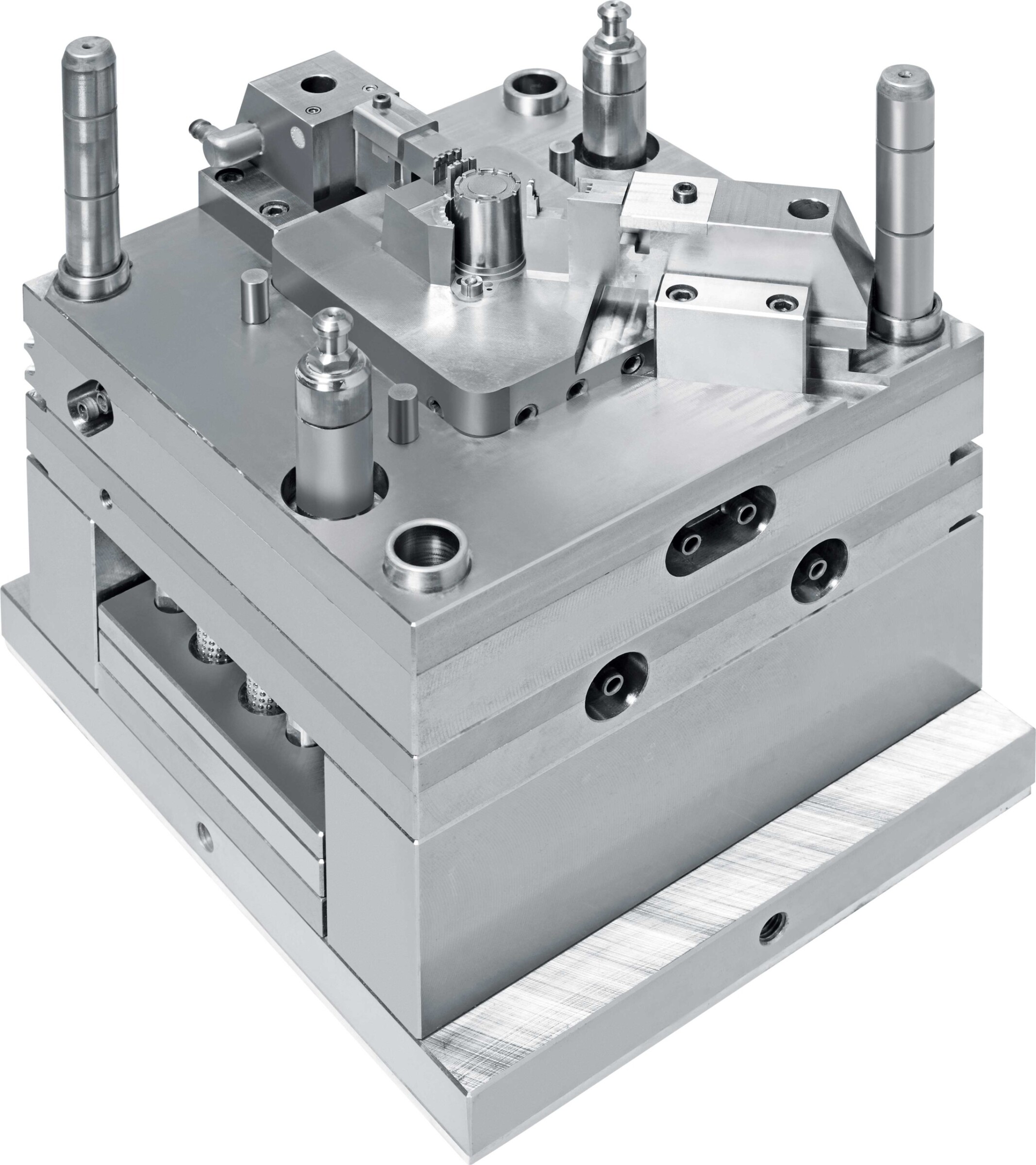 From Etzgen to all corners of the world.

The two MP2400 Connect wire EDM systems were chosen for several reasons. Fatih Cakir, production manager for tool- and mouldmaking in Etzgen, points out that the large workspace of 600 x 400 x 310 mm enables the company to handle the complete range of components with great flexibility. In addition, the toolmakers can cut smaller components in multiple clampings or several components from a larger plate. The latter is mainly performed during unattended night shifts. “For this, the MP2400 Connect has unbeatable advantages. It runs extremely reliably and automatically and reliably threads the wire, even in difficult situations, such as plate of different thicknesses. This enables the wire EDM units to operate productively around the clock,” Cakir reports. 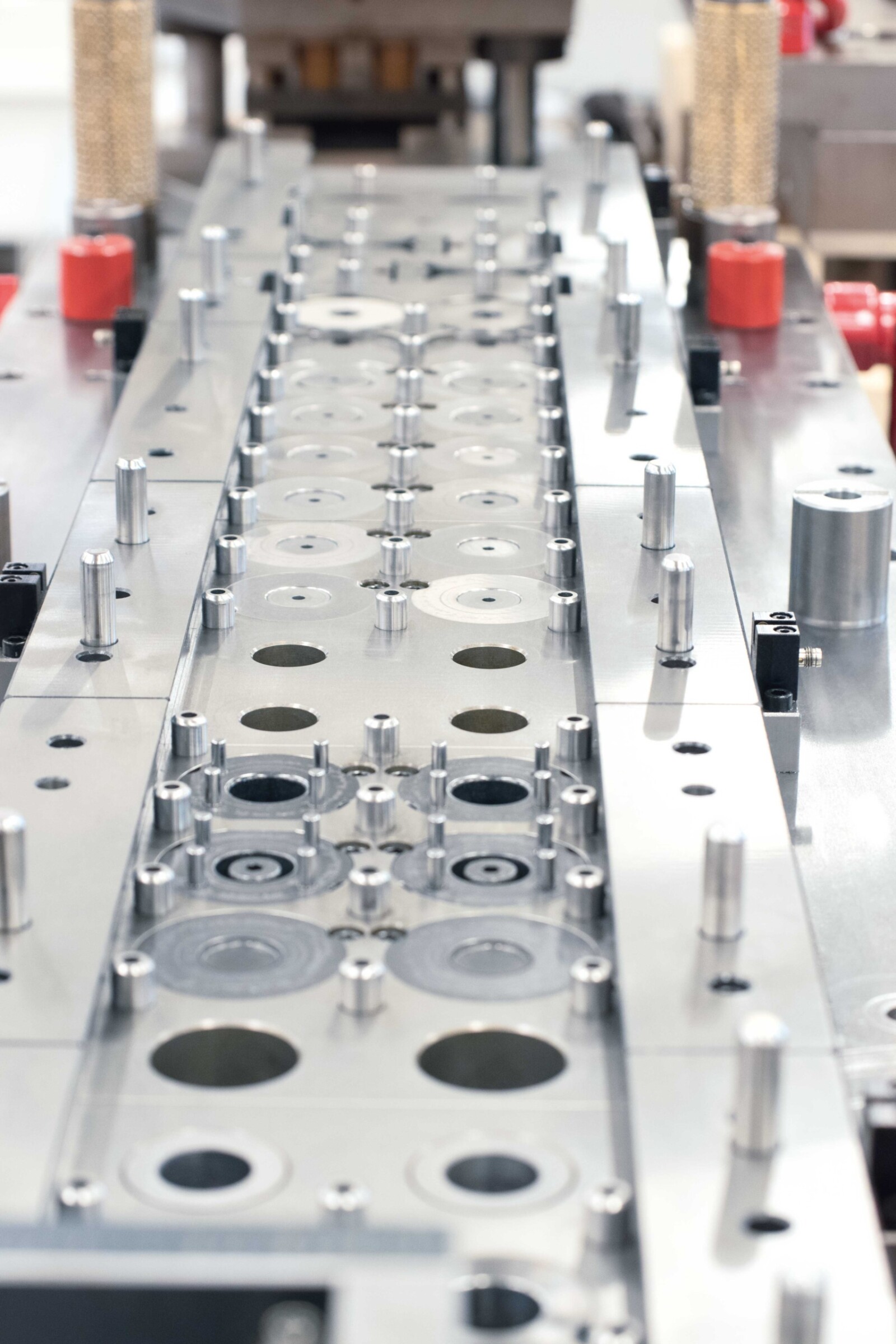 Complex workpieces are produced on multi-stage forming tools in a single sequence.

In addition, he explains another extremely important feature: “On the MP2400 Connect wire EDM systems, in conjunction with the fine finishing generator, we can program the cutting speeds so that we can cut highly precise geometries to an outstanding surface finish with roughnesses of Ra 0.1 µm. Although this slightly prolongs the wire-cutting process, it significantly reduces the time required to polish the surfaces to about a third. This means that we can now work much more efficiently overall with the MP2400 Connect wire EDMs. In addition, we achieve greater flexibility thanks to faster throughput.” Sautermeister adds: “Of all the machines we assessed, the wire-cutting machines of the MP series offer the best combination of high accuracy and surface quality.” 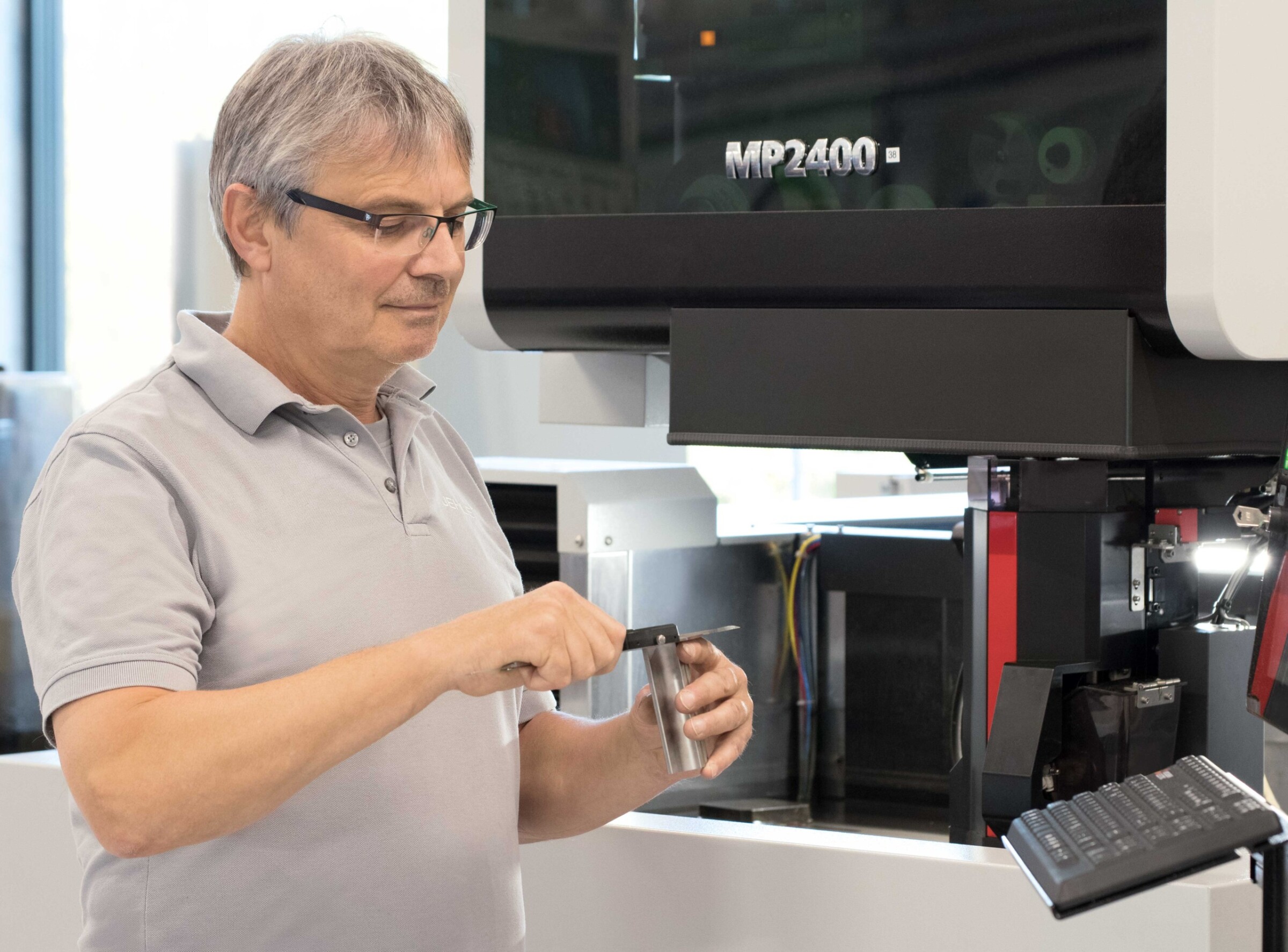 When it comes to stamping tools for ­automatic high-output forming machines, superlative precision is what counts.

To enable the two MP2400 Connect in Etzgen to operate unattended, they have additional wire stations for 20 kg wire spools. The tool- and mouldmakers in Etzgen usually use 0.15 to 0.25 mm wire and cut components from 30 to 70 mm thick plate of conventional tool steels for cold and hot work and, more rarely, of carbide. A function extension facilitates cuts at angles of up to 45° – for tapered edges for example. To minimise downtime, the machines are equipped with the additional ‘connect’ function enabling the mcAnywhere Contact app to sends the operator a mobile phone text message to report malfunctions during unsupervised shifts.

Skilled operatives were able to set up and operate the new MP2400 Connect wire EDM machines in a very short time, Cakir confirms. This is made possible by operation at the large-format touch screen, the handling of which is comparable to that of conventional smartphones. It proves to be particularly straightforward and user-friendly for skilled workers undergoing training and especially for apprentices. The features of the wire EDM system are self-explanatory. Usually the toolmakers in Etzgen use the external CAD/CAM system VISI to design and program the components being cut. The machine operator receives the data via a data line, supplements it with a number of cutting and machine parameters, sets up the wire EDM and starts the production process. Single items calling for frequent set-up and retooling are machined by the Swiss toolmakers in supervised shifts. Smaller series and components that have already been reliably cut multiple times as repeat parts can be machined by the wire erosion systems in unattended shifts overnight and at weekends. 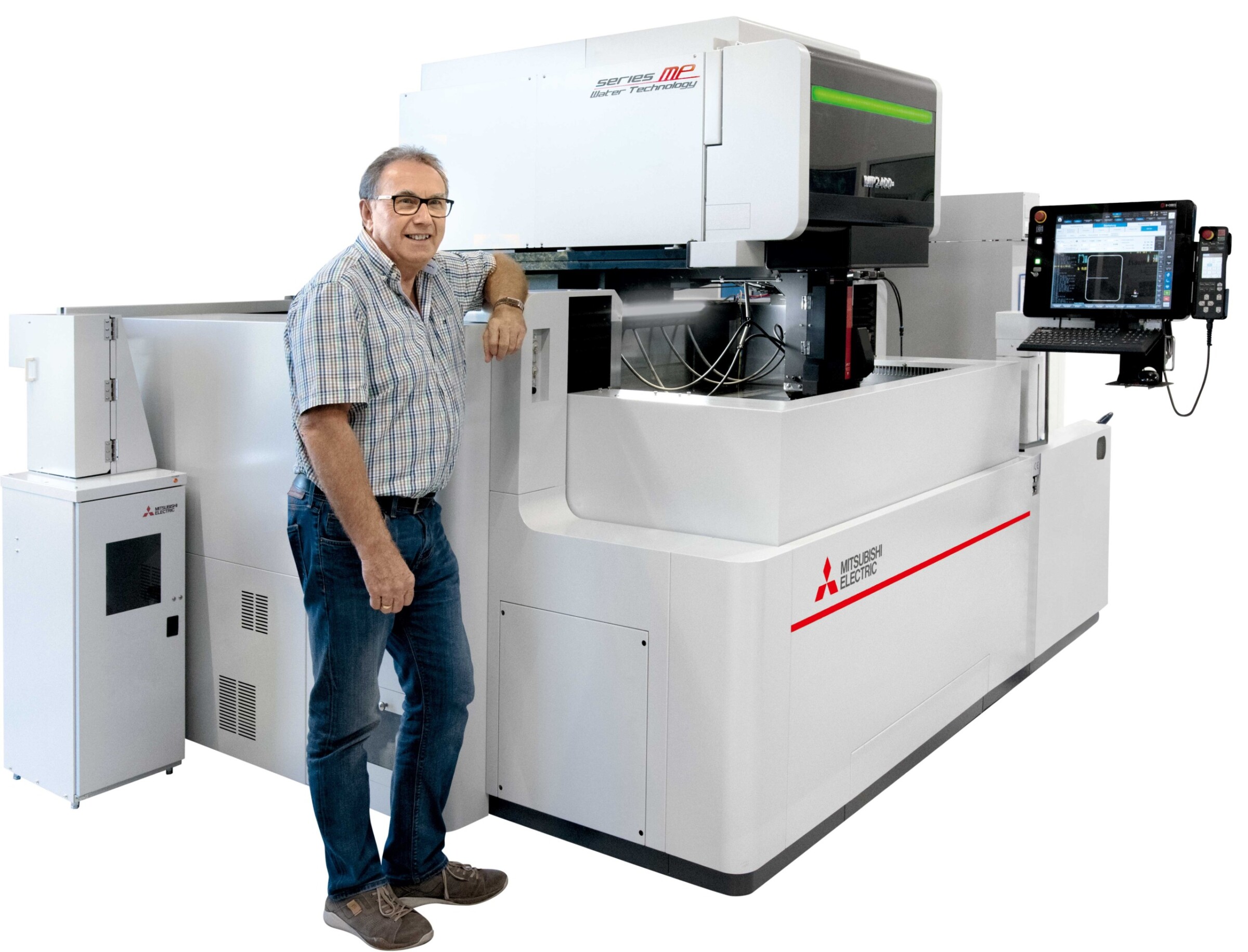 Of all the machines we assessed, the wire-cutting machines of the MP series offer the best combination of high accuracy and surface quality.

Another advantage of Mitsubishi Electric’s machines, says Sautermeister, is that they are amenable to partial or even complete future automation. The toolmakers in Etzgen, Switzerland, have already significantly reduced non-productive periods and downtime. Plate from which several components are to be cut is loaded on change pallets outside the wire EDM machines. During retooling, the machine operator merely changes the entire pallet. This is done quickly and reliably. Elaborate, time-consuming and labour-intensive set-up and adjustment at the machine are no longer necessary. Sautermeister can even imagine robots changing the pallets for his wire EDM machines in the future. “What we really appreciate about the Japanese manufacturer is that it is open to such ideas and approaches that enable us to machine more cost-effectively,” he adds. 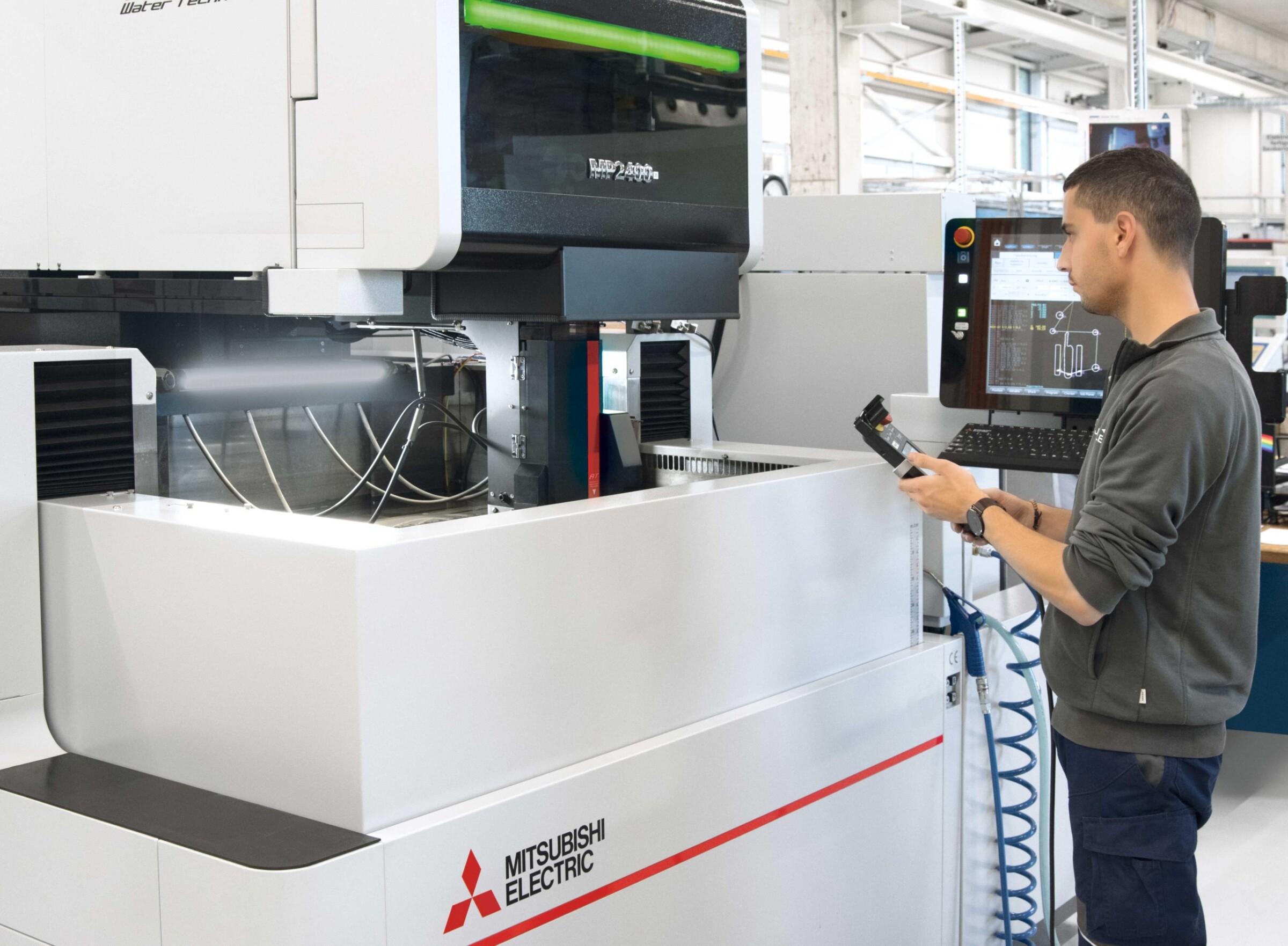 The intuitive control system with its large touch screen and user interface is ­comparable to current smartphones.

For this, the MP2400 Connect has ­unbeatable ­advantages. It runs extremely reliably and automatically and reliably threads the wire, even in difficult situations, such as plate of different thicknesses.

From a garage business to a globally recognised industrial partner

The company, with its two divisions of tool- and mouldmaking and series production, is today an internationally respected development and production partner in the automotive and electrical industries, in the construction sector and in machine manufacture.

On more than 50 mechanical, hydraulic and servo-electric presses with a pressing force of up to 6300 kN, the Swiss suppliers produce components in large series from 0.2 to 12 mm thick and up to 800 mm wide sheet and plate. They can also produce ready-to-install components using a variety of welding processes, riveting, all machining processes, heat and surface treatments and assembly. With the aid of its comprehensive logistical services, these are supplied to customers all over the world.

Development, production, assembly, provision and maintenance of forming tools and injection moulds for internal needs and for external customers