Visitors thronged around the exhibits, and all the tables for meetings were occupied. Visitors from all over the world and advisers from Mitsubishi Electric put their heads together and talked shop. At the company’s EMO fair stand, the big issues were new machines, automation solutions and, above all, cultivating contacts. Alongside all this, there was always enough time for a cup of freshly brewed coffee or for a snack. Or for a beer. 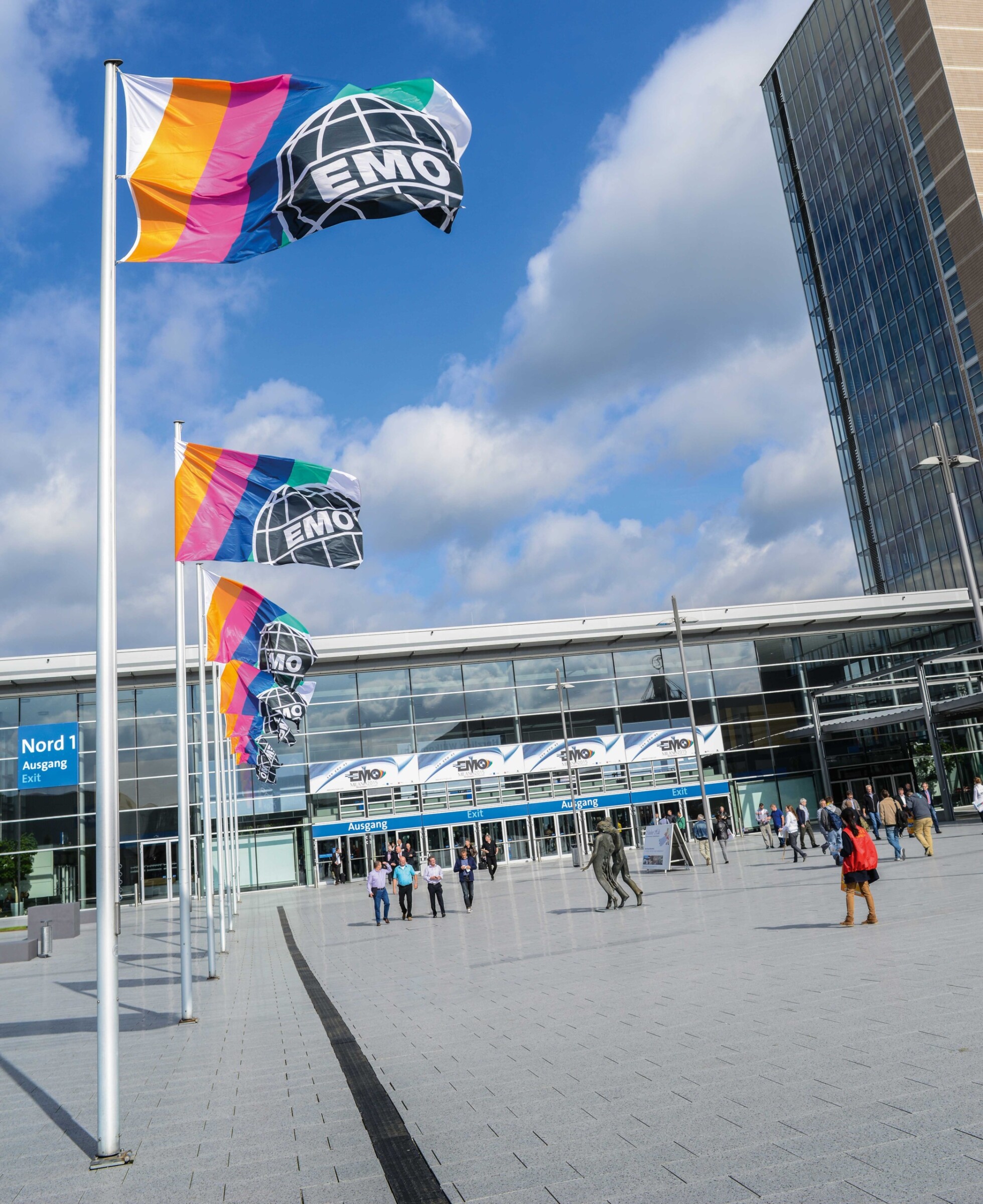 Visitors thronged around the exhibits, and all the tables for meetings were occupied. Visitors from all over the world and advisers from Mitsubishi Electric put their heads together and talked shop. At the company’s EMO fair stand, the big issues were new machines, automation solutions and, above all, cultivating contacts. Alongside all this, there was always enough time for a cup of freshly brewed coffee or for a snack. Or for a beer.

Managing Director Jörg Lünstedt and his wife Karen from LÜNTECH Erodiertechnik GmbH in Werther, Westphalia were among the visitors to the Mitsubishi Electric stand at EMO 2013 in Hannover. For Jörg Lünstedt it was important to stress the great service and diversity of machines at the stand. In a sweeping gesture towards the stand, he summed up his enthusiasm: “What I like is that Mitsubishi shows nothing but machines in action. You see things in motion. I also like the friendly atmosphere. I feel well looked-after and thoroughly welcome.” LÜNTECH is a jobshop for tool- and mouldmakers that operates with six wire EDM machines from Mitsubishi Electric. “Our experience with them has been nothing but positive. This also applies to Mitsubishi’s service capability,” Karen Lünstedt stresses. “And when we officially opened our new plant shop at our in-house show in July 2013, Mitsubishi was there and demonstrated our equally new MV2400R.” The new MV series is meeting with big customer interest in ­general. Thomas Schlemmbach, Production Manager at AWEBA Werkzeugbau GmbH, Aue, reported that he bought three MV1200R machines in 2013. The reason was to boost capacity. “We bought the machines virtually on the spur of the moment. We needed the machines from one moment to the next and Mitsubishi supplied them promptly.” Schlemmbach leaned back contentedly in his chair. “Without the MV1200R we’d never have managed the work in hand. We expect it to run for at least 500 hours per month.” Before making its decision, AWEBA conducted extensive tests, some of them with rival machines. Mitsubishi was the only company able to deliver the desired quality within the demanded short space of time.” 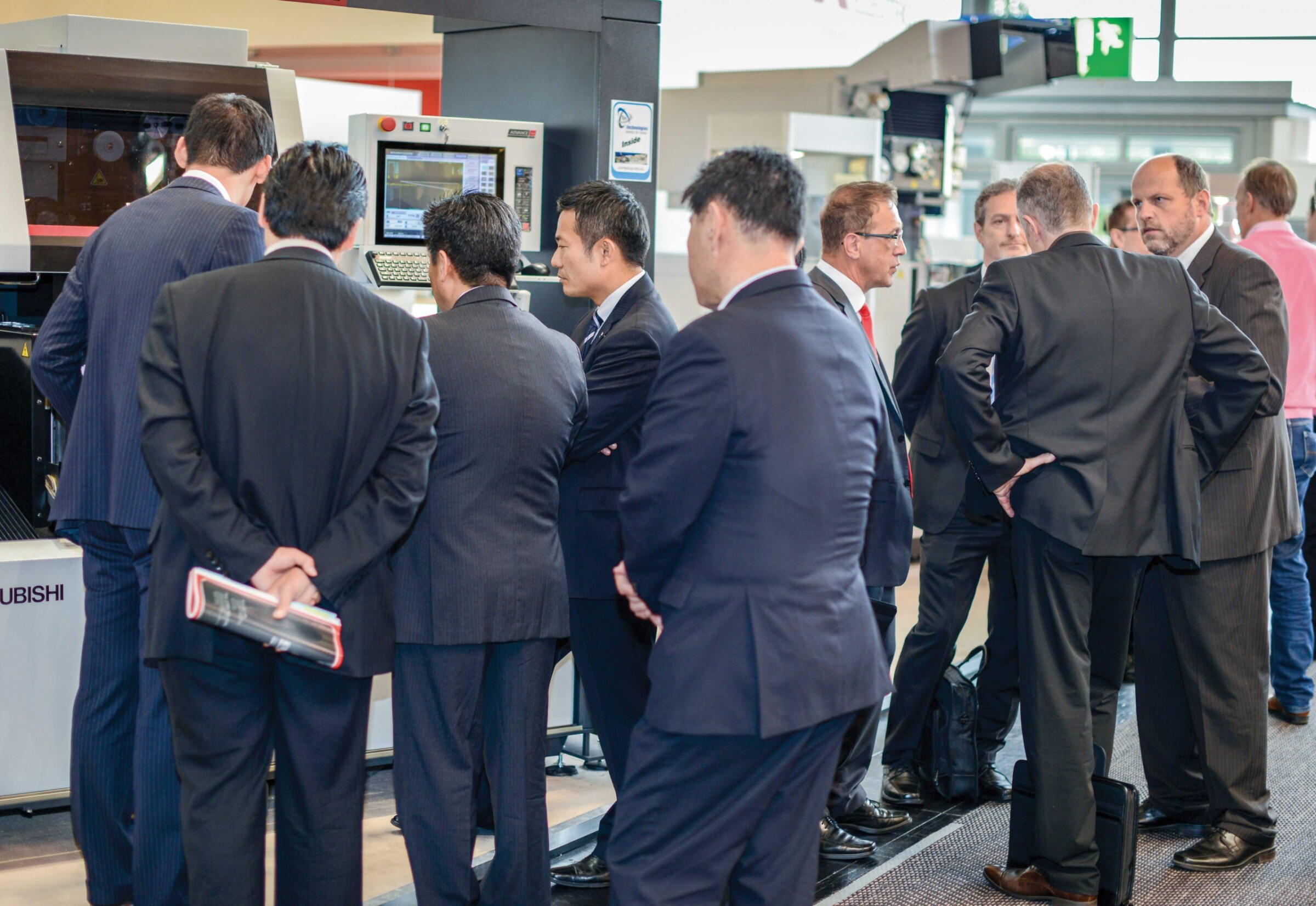 With so much to see, visitors flocked to the Mitsubishi Electric fair stand.

Holger Rose, Technical Toolshop Manager at HellermannTyton Engineering GmbH in Tornesch, made a scheduled investment at the Mitsubishi Electric fair stand. The manufacturer of components for injection moulds was interested in purchasing a wire-cut erosion machine. “We’ll probably go for an FA30-S Advance V, although a machine from the MV series is also under consideration,” Rose revealed, sipping his mineral water. “We’ve been working with an FA20 for years and are very impressed by it – the same can be said for Mitsubishi’s technical advice.” The decisive ­features when choosing a machine, he believed, are the automatic wire-threading system and the possibility of running the machine at night unmanned. As far as the latter was concerned, his experience with the FA20, which operates for about 40 hours without an operator, had been very good. The new machine, he claimed, was an absolute must for capacity reasons. And he was also planning to replace an old machine from a different supplier. In the medium term, HellermannTyton would probably switch entirely to wire EDM systems from Mitsubishi Electric.

What I like is that Mitsubishi shows nothing but machines in action. You see things in motion. I also like the friendly atmosphere. I feel well looked-after and thoroughly welcome.

Silvio Wendler from Fresenius Kabi Deutschland GmbH in Bad Homburg also intended to buy a wire erosion system. He said he had come to EMO to look at the MV2400R. Because of its high precision, he needed this machine among other things for the production of infusion components for the medical technology sector. He was also considering buying an ED24-NC start hole drilling machine. In addition, he was interested in general in new products and wanted to intensify his contacts with Mitsubishi Electric. “For the latest investment, the decision has been taken in favour of Mitsubishi Electric,” Wendler explained over a cup of coffee. “There are several reasons for this. Firstly, I like what the company offers in terms of service and training. And secondly, the selected machine is technically in line with our future plans.” He said he had already been in contact with Mitsubishi Electric for some time for accessories. And this is how he had gained confidence in the company. 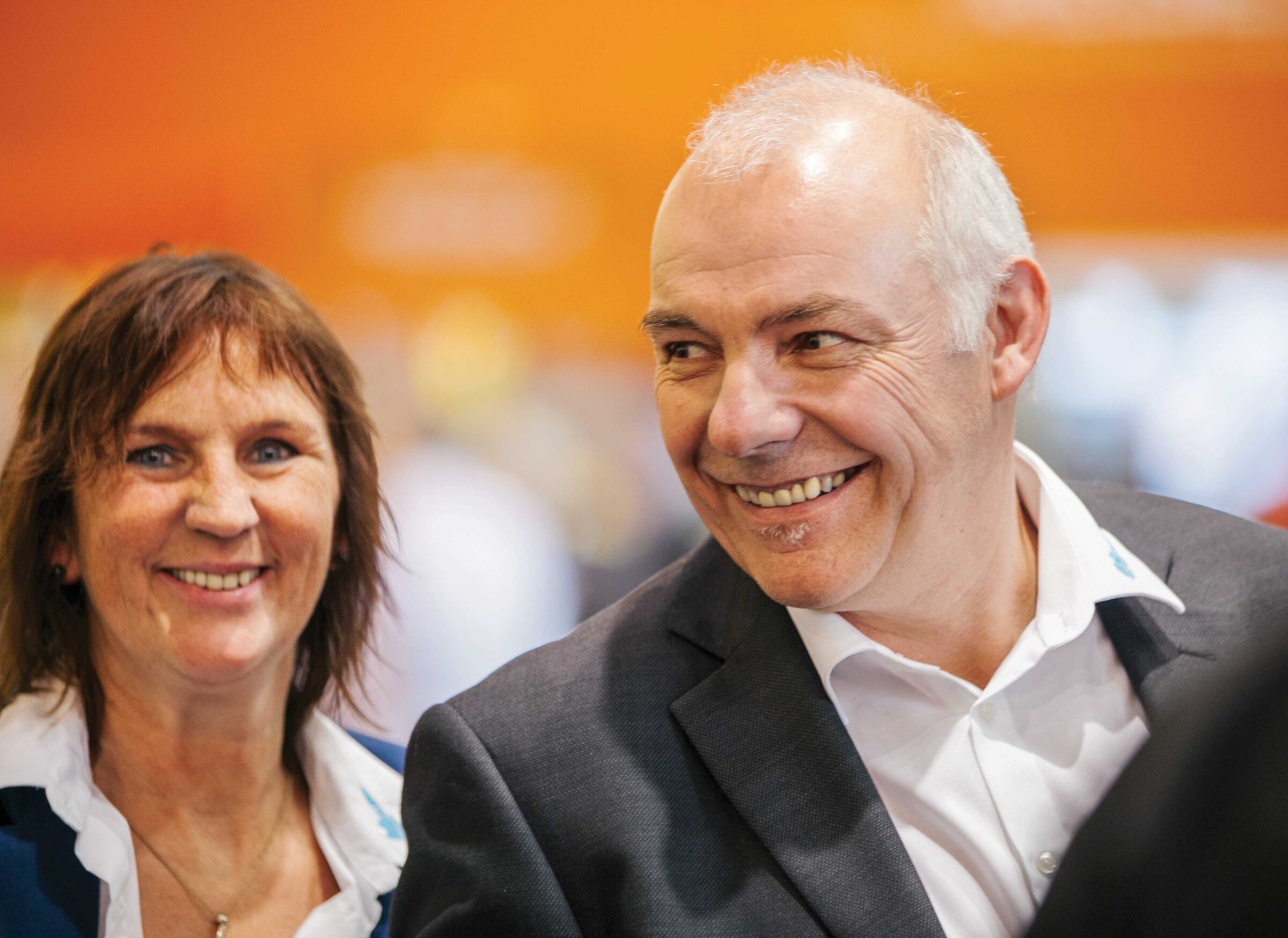 Jörg Lünstedt and his wife Karen from LÜNTECH Erodier­technik GmbH in Werther were among the visitors to the fair stand.

Making use of ideas from ­cooperation partners

At EMO, Dipl.-Ing. Harald Bader, Managing Director of HBi Robotics GmbH, Gosheim, a Mitsubishi Electric cooperation partner, showed how diamond-coated grinding wheels can be dressed (= profiled and sharpened) by wire erosion. He explained the process to visitors at the production cell. “The binder is extremely gently eroded from the grinding wheel by electrical discharge, leaving the diamond grains exposed. The advantage of the process is that the wheels last four or five times longer and can also be dressed much more often.” Delighted by the lively ­visitor interest, Bader named other ­advantages for the customer: set-up time at the grinding machine is reduced and the user can produce or dress his ­grinding wheels himself. Dipl.-Ing. Jochen Hipp, Managing Partner of ITS-Technologies GmbH & Co. KG, Oberndorf am Neckar, also supported Mitsubishi Electric as a partner at EMO. At the production cell, he demonstrated how easy it is to clamp grinding wheels. “We are suppliers of supplementary axes and made a B-axis available on which the wheels rotate for dressing.” Hipp also ­mentioned the benefits to the user. For the customer, the system’s flexibility is useful, particularly if ready-to-use grinding discs are needed at short notice. In addition, he continued, the process enables EDM jobshops to produce grinding wheels for specialist grinders and improves process security in the downstream production steps. 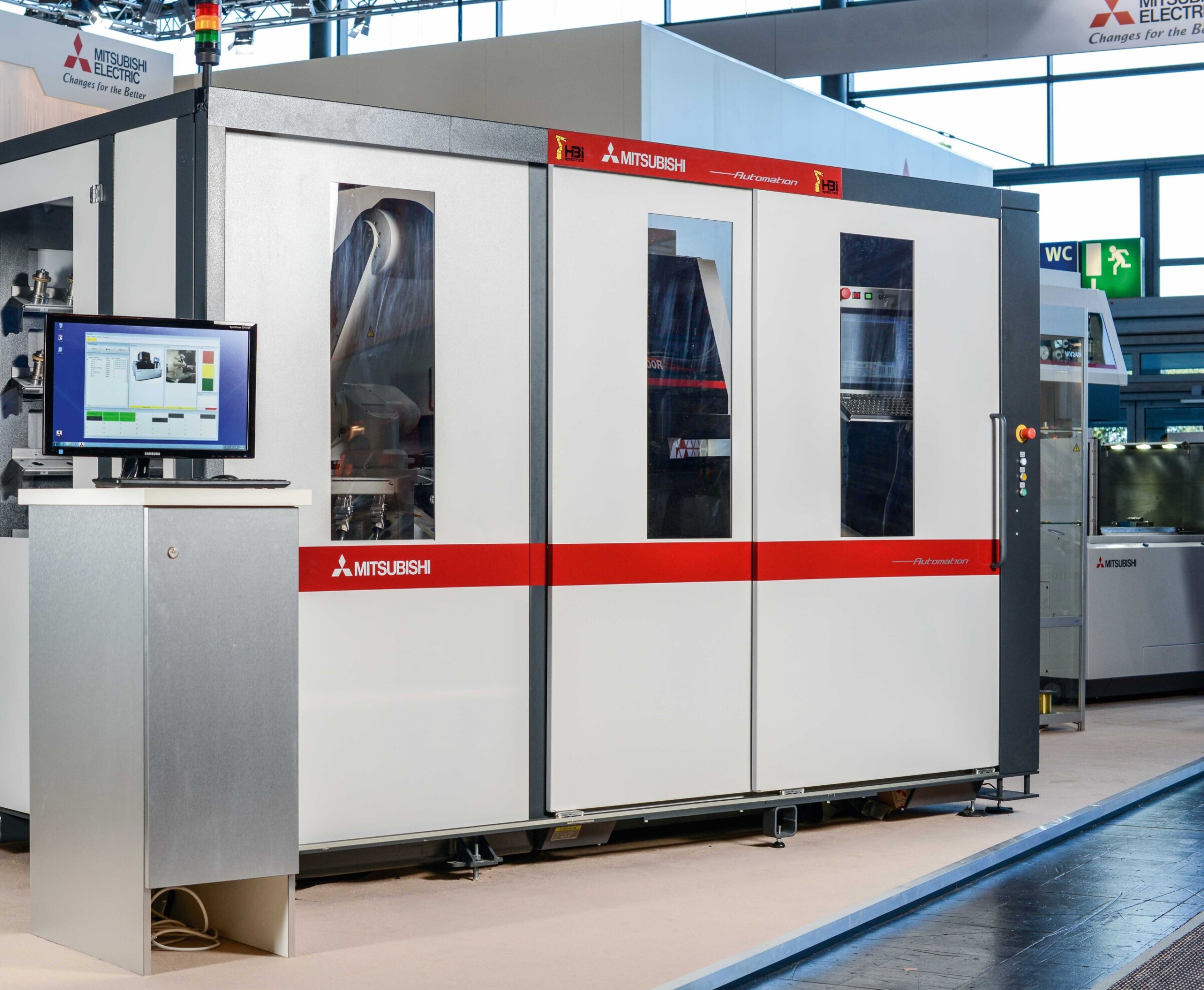 The advantage of the process is that the wheels last four or five times longer and can also be dressed much more often.

Another cooperation partner present at the fair stand was Institut für Mikro­technik Mainz GmbH (IMM), Mainz, which demonstrated ­micro-machining with wire-cut and die-sinking erosion. According to Dipl.-Ing. Frank Neumann, Head of the Precision Engineering Department, IMM tests machines for performance in the microscopic range. Neumann pointed to components in a glass case. “On a PA20 wire EDM system, we achieved a surface quality of 16 nanometres back in 2007. And that is still the benchmark today.” Neumann then turned to the Sonodrive 300 vibratory spindle for sinker EDM developed by IMM that permits vibration-assisted drilling in the micrometre range for holes of all kinds. IMM, he claimed, had achieved process security with 14 and 18 micrometre bores. The process, he continued, makes rotation of the Z-axis and conventional drilling spindles superfluous. It also makes it easier to remove abraded particles from the drilled hole. In series of tests, reductions in machining time of up to 60 per cent over conventional standard equipment have been demonstrated, he claims. 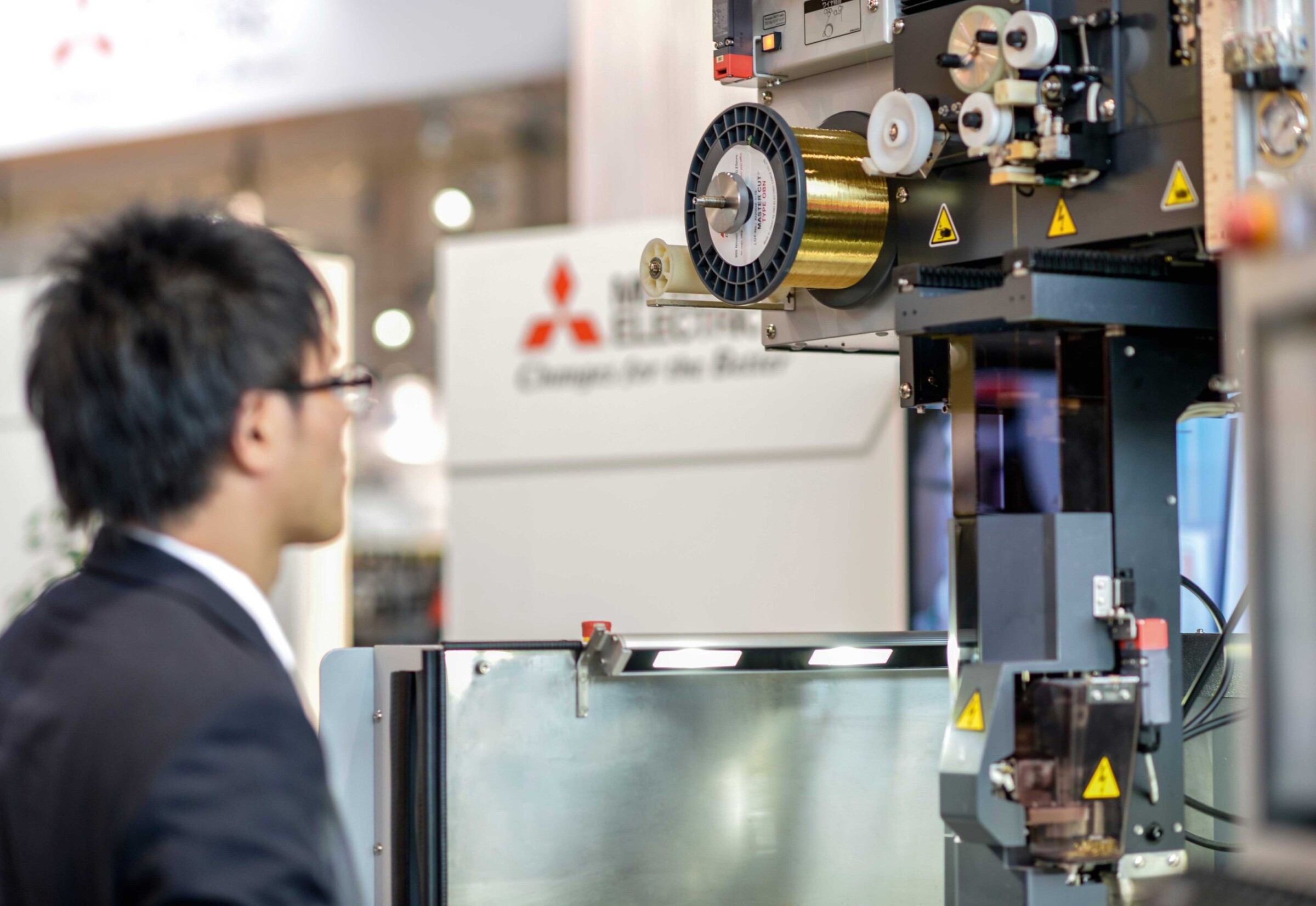 At the Mitsubishi Electric fair stand, there were live ­demonstrations of many technical innovations.

Another development of IMM, soon to become a Fraunhofer institute, is the Micro Vibe 300 vibration unit for use during die-sinking EDM, which achieves time savings of 70 per cent. 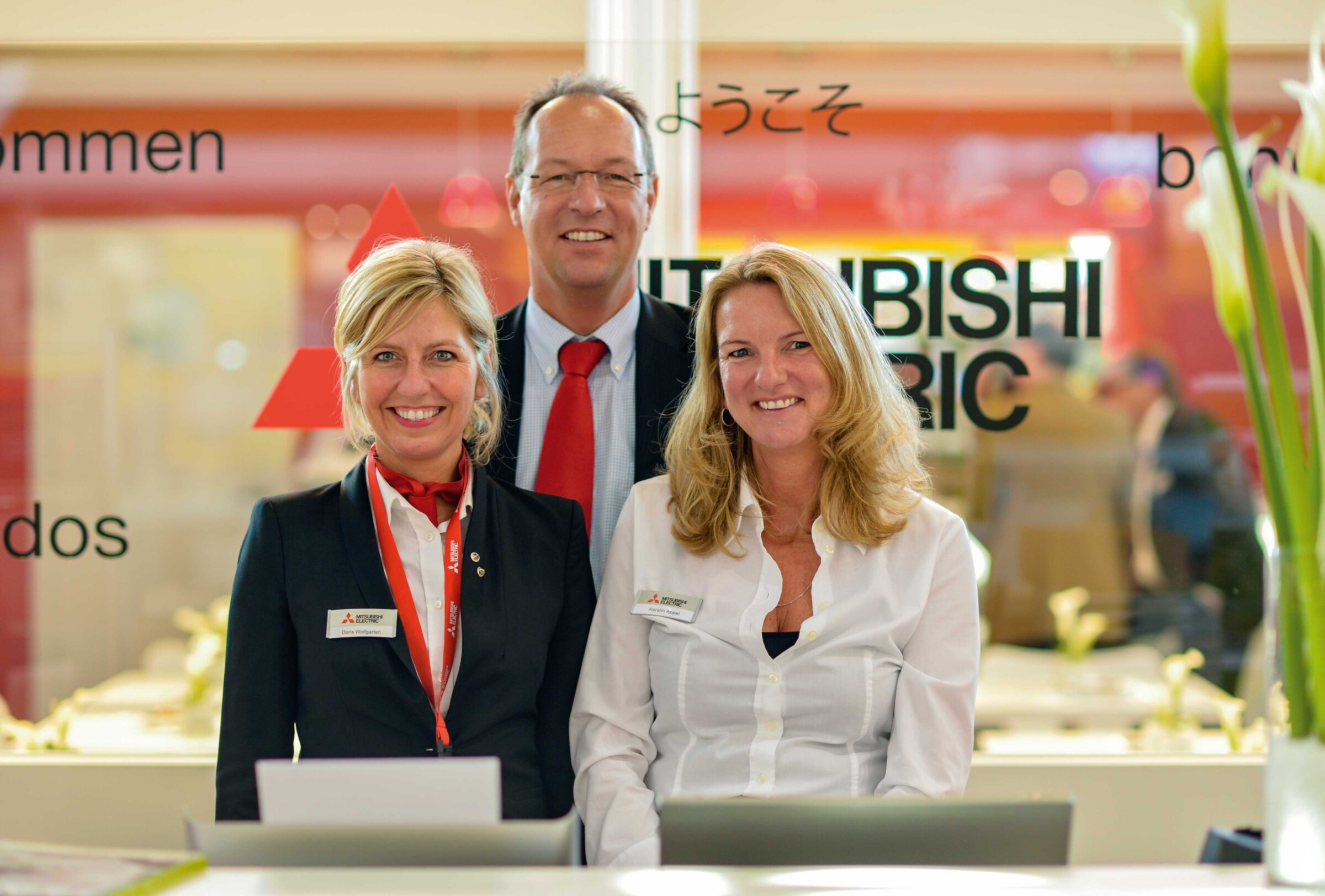 The Mitsubishi Electric team was delighted by the many interested visitors and provided an inviting and relaxed atmosphere.

What would a fair stand be without a look ahead? To expectant visitors, Mitsubishi Electric raised the curtain on the world’s first oil-based wire-cut EDM system with tubular direct drives. The MX600 wire-cut erosion machine which celebrated its world premiere at EMO and is synonymous with superfine surfaces and the machining of corrosive materials with very high long-term precision rounded off Mitsubishi Electric’s trade fair showing. 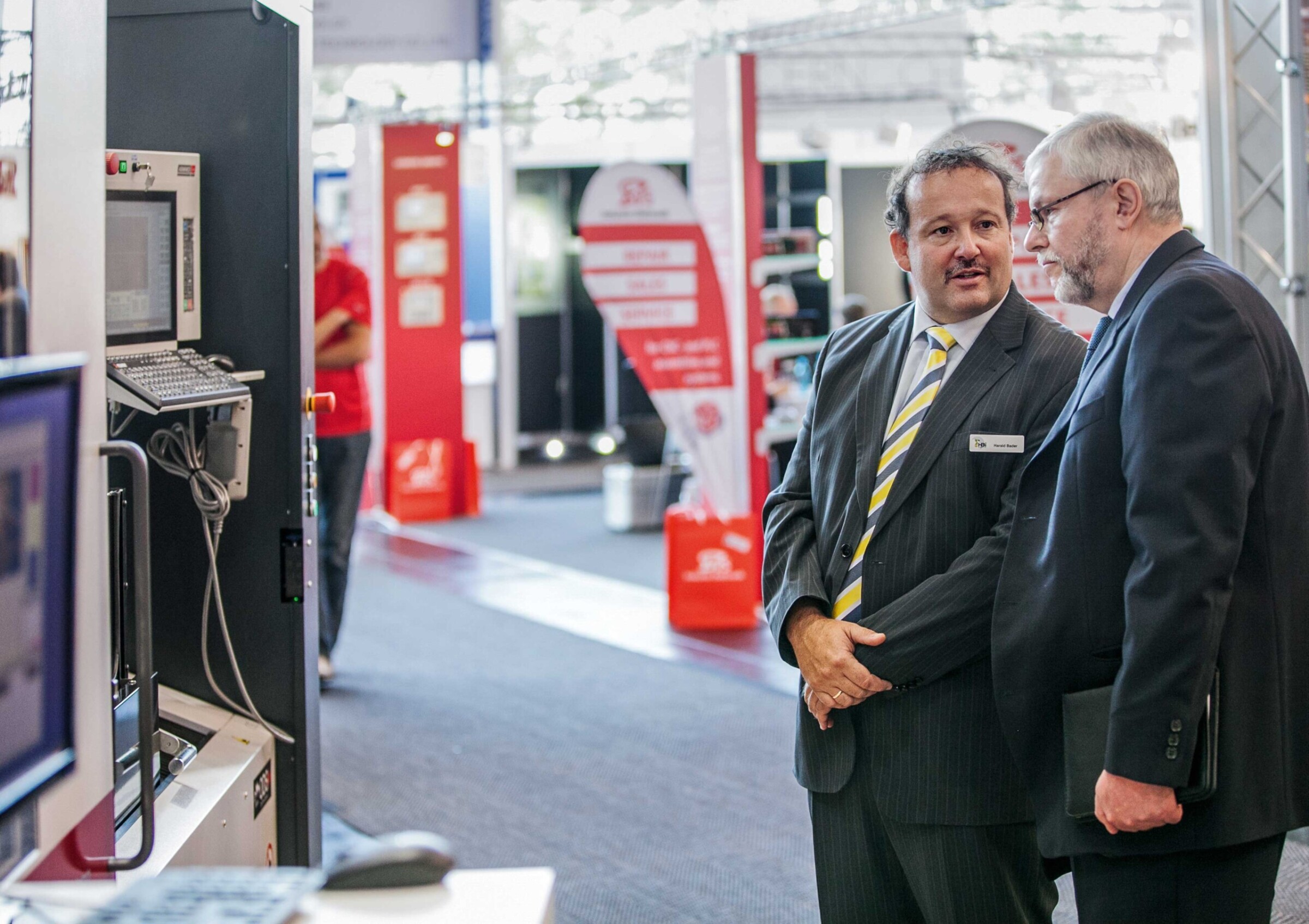 A perfect match: wire EDM and software as a package

Thanks to Christijan Lenz, Indirect Sales, DCAM GmbH, Berlin, the subject of programming was also represented at the Mitsubishi Electric fair stand. 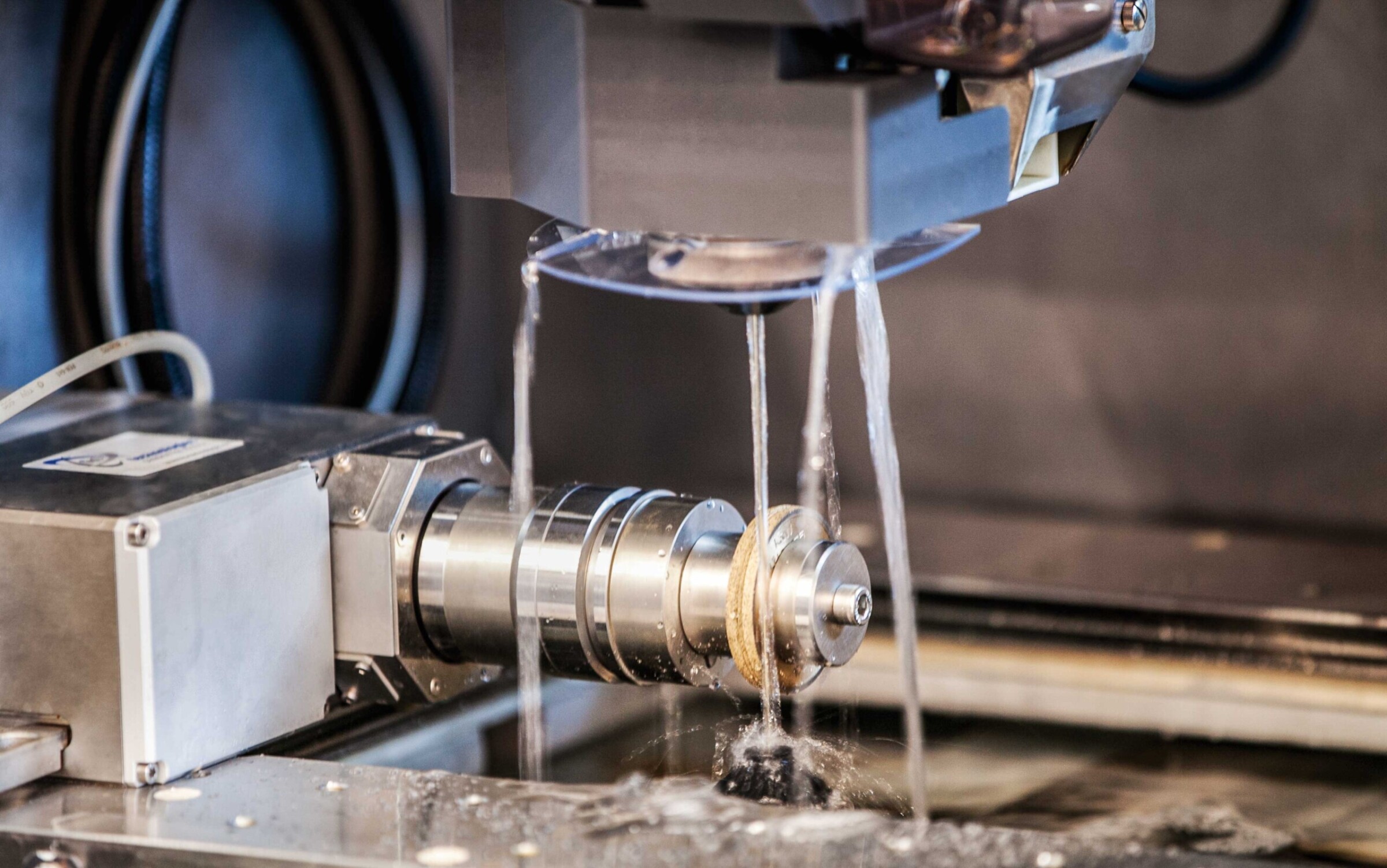 “We specialise in developing 3D software for wire-cutting and have been engaging in strategic cooperation with Mitsubishi for two years.” Asked how this looks in practice, Lenz tells us that Mitsubishi Electric always offers DCAM software when a potential user shows interest in purchasing a machine. We’re a perfect match, he adds, because Mitsubishi Electric is highly innovative and supplies a compact product. 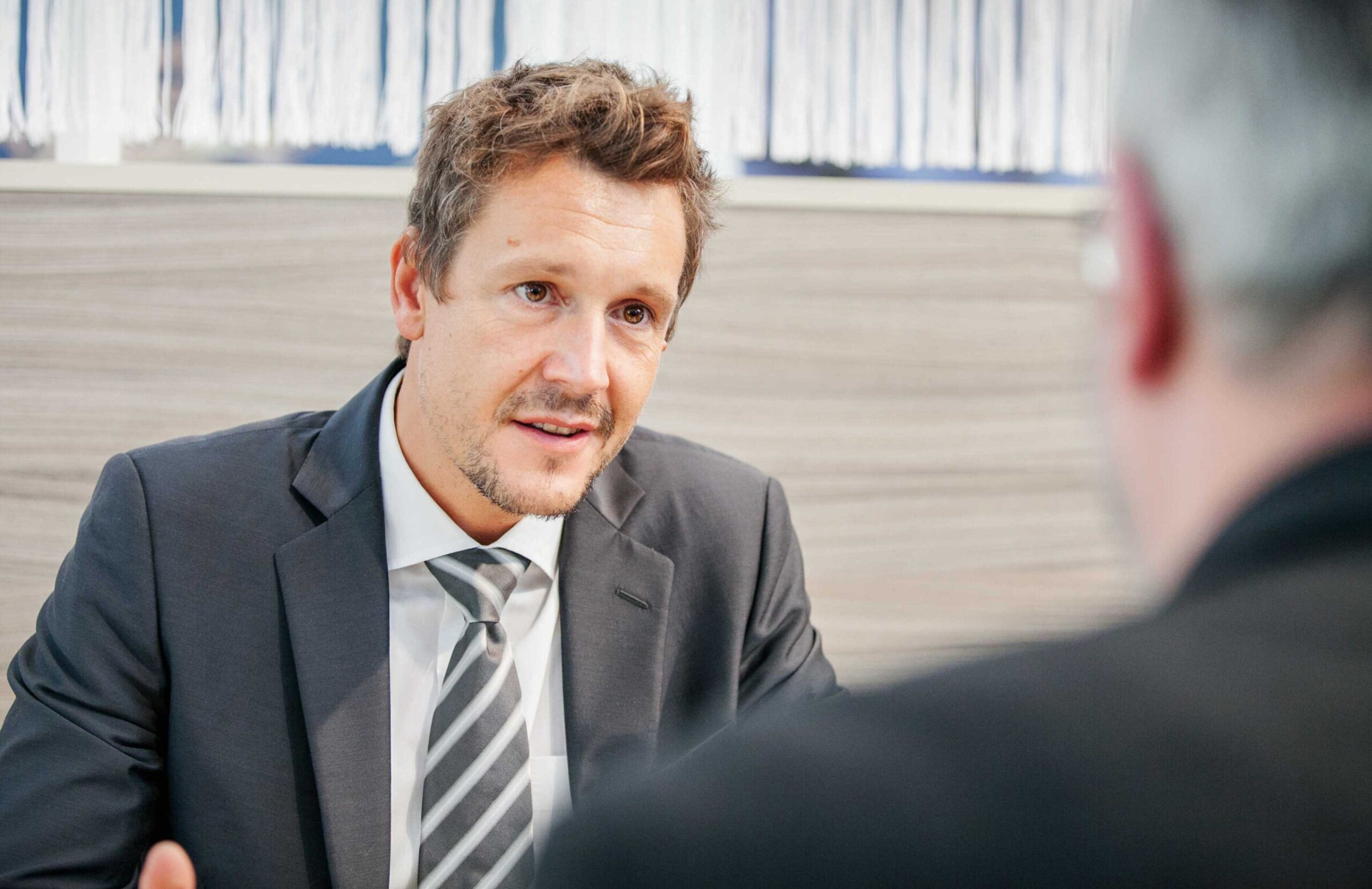 A perfect match: wire EDM and software as a package

In addition to this, Mitsubishi Electric’s approach to customer relations is totally in line with DCAM’s philosophy, Lenz adds. He sees plenty of advantages for the user: “Thanks to cooperation with Mitsubishi, we are in a position to respond at short notice to new technologies and integrate them in our software. The operator benefits from this, because he doesn’t have to search for a solution on the market. Good partnership is also important so that tests can be carried out – in terms of the use of additional axes, for example.”