By investing in an MV2400R Grand Tubular from Mitsubishi Electric, Werkzeugbau Kröger has taken huge a step forward in terms of productivity and efficiency. A step that reveals itself among other things in shorter machining times and lower energy consumption. 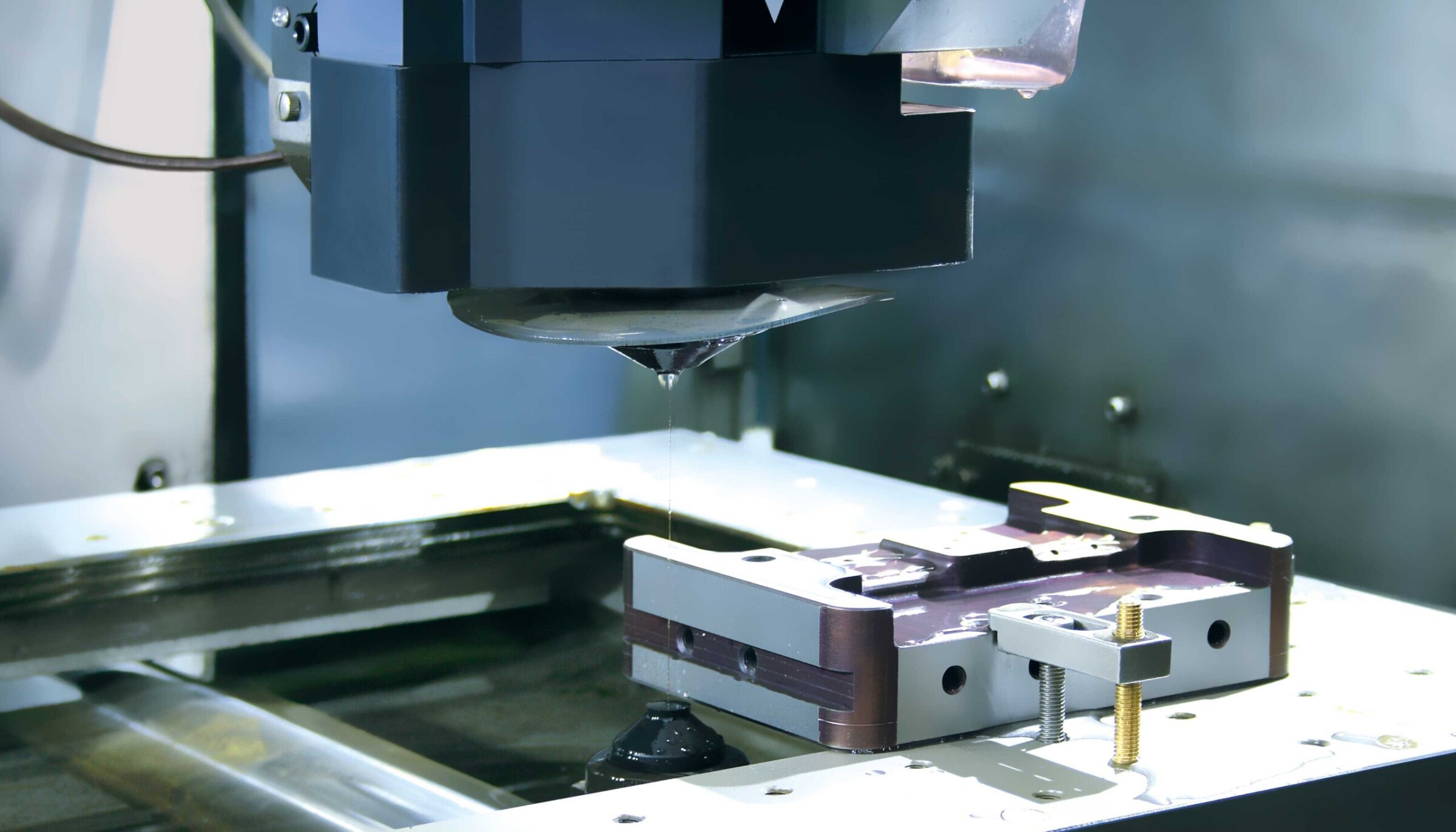 By investing in an MV2400R Grand Tubular from Mitsubishi Electric, Werkzeugbau Kröger has taken huge a step forward in terms of productivity and efficiency. A step that reveals itself among other things in shorter machining times and lower energy consumption.

Hans-Jürgen Kröger strides forth. The Managing Director of Werkzeugbau Kröger GmbH, Lohne (Oldenburg), is on his way to his new wire EDM machine. “Mouldmaking is becoming more and more challenging. And we have to stay competitive with the Asian market. We can do this best by satisfying our customers. They have high expectations and demand precision and high surface quality at an affordable price.” 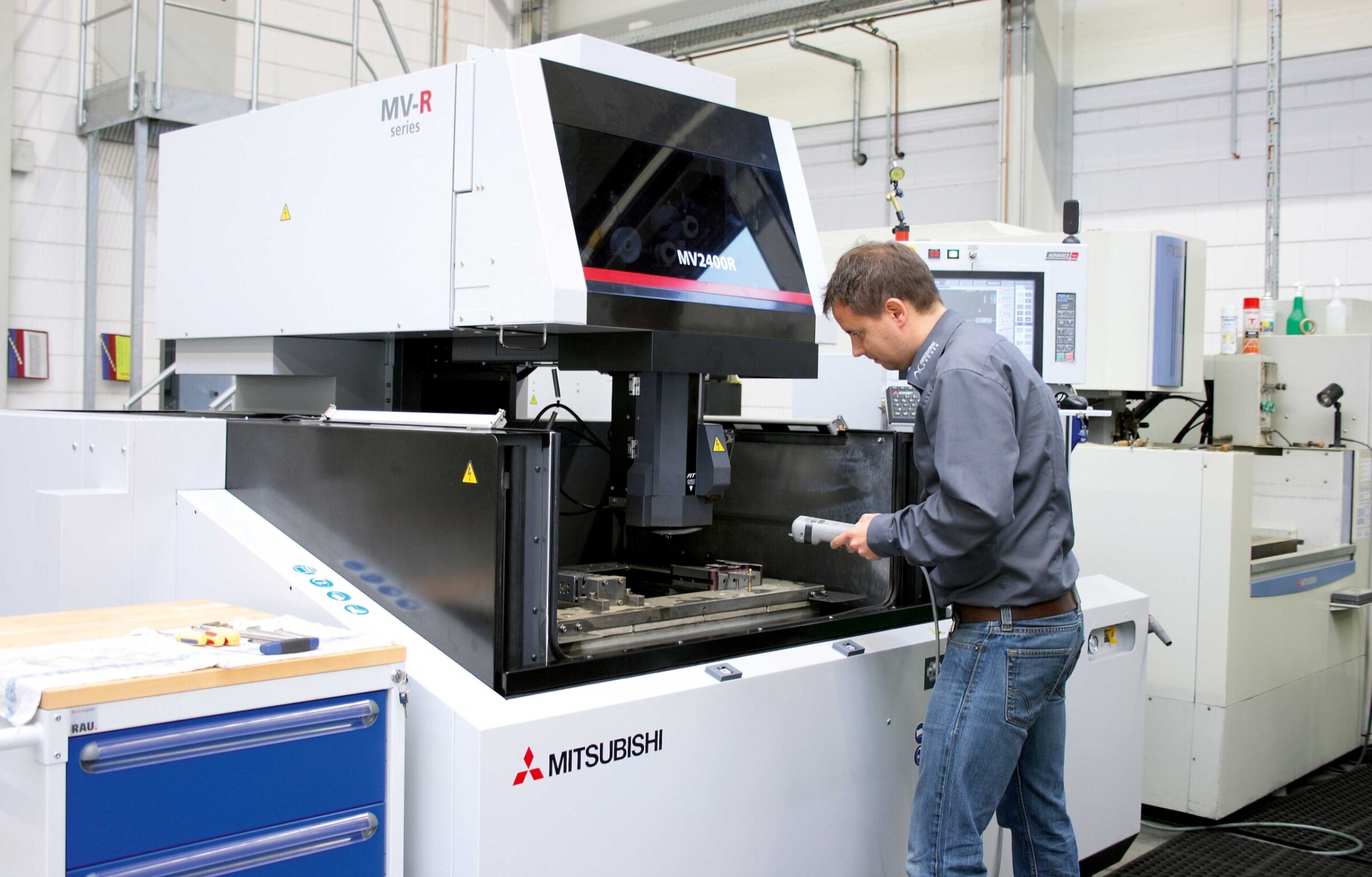 By investing in the MV2400R Grand Tubular, Kröger Werkzeugbau benefits among other things from faster machining and lower energy consumption.

Werkzeugbau Kröger, a toolshop founded in 1998, mainly serves plastic parts manufacturers and automotive component suppliers in Germany. A currently 24-strong team attends to customer needs. Special requests are by no means out of the question, the owner stresses. What Kröger means by quality workmanship is demonstrated by Production Manager Jörg Fangmann who presents a contoured insert for the ejector side of an injection mould that they produce for the agricultural industry. “The production of technically sophisticated injection moulds is one of our specialities. For this component, we produced the holes on the wire-cut erosion machine. The sizes of parts that we machine on the MV2400R extend from small to the machine’s maximum work space dimensions.” Kröger underlines this statement by placing a minuscule component, a slide guide, next to it. “Here you can clearly see the contoured areas that we wire-cut on the injection mould components.” 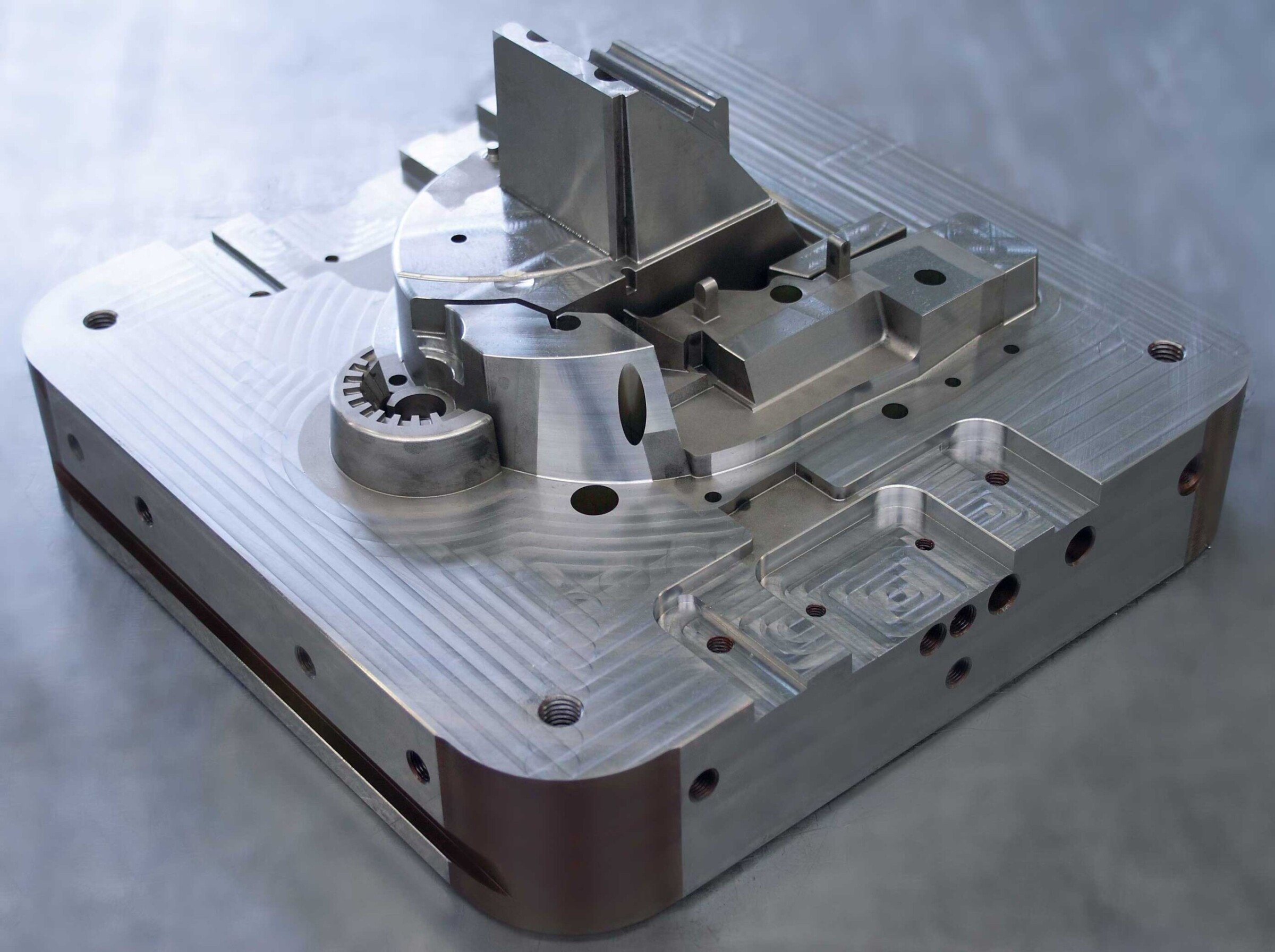 Contoured insert for the ejector side of an injection mould that Kröger produces for a manufacturer of agricultural machinery.

Technologically the best ­machine on the market

The mouldmakers in Lohne produce parts for series production, development work, testing and the 2-component sector using heat-treatable steels. The company also carries out repairs, ­produces testing tools and modifies moulds. In view of the high standards expected of injection mould precision and quality, Kröger is constantly investing in forward-looking technologies. And this includes the MV2400R Grand Tubular EDM system from Mitsubishi Electric. Kröger stops at the machine. “We’ve been working with our new Mitsubishi since the middle of August 2013. The MV2400R is technologically the best machine on the market at the moment. Until now we’ve had an FX20, and we shall continue to use it for certain tasks.” Kröger sees no alternative to wire-­cutting. Thanks to this flexible process, he says it has become easier to produce components for tools and moulds. As an example, he lifts a long, thin element produced on a machine of the MV series. 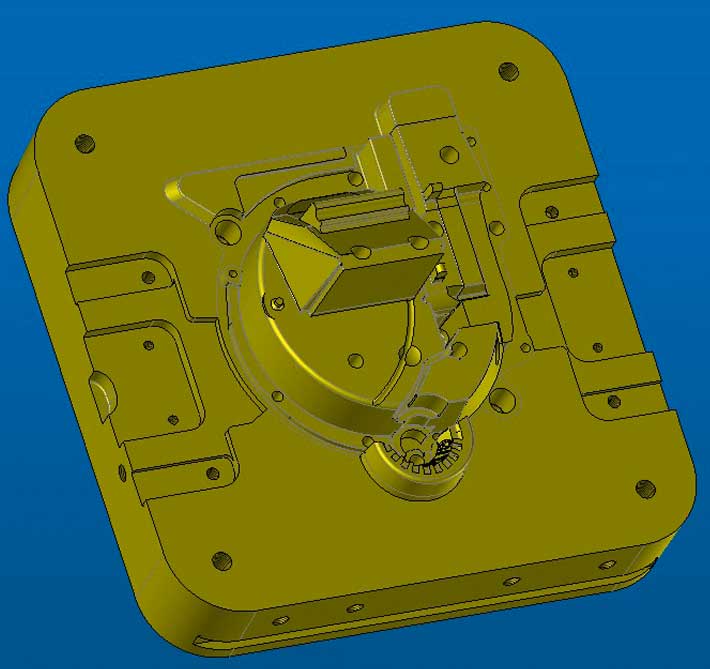 Contoured insert for the ejector side of an injection mould and its assembly as CAD files.

Fangmann clamps a workpiece in the MV2400R Grand Tubular, which is known for its higher machining speed, reliability, energy savings and for corner and circular accuracy. “The machine threads the wire much more speedily and neatly. And in the cutting gap as well, which we also attach great importance to. This used not to be possible.” The reasons why the MV2400R Grand Tubular cuts appreciably faster and more precisely can be found in the modern drive strategy with Tubular Shaft motors that ensure totally cogging-free movements that can be controlled with great sensitivity. And also in its totally digital ADVANCE PLUS CNC control and its Optical Drive System in which an optical network handles data interchange. Apart from this, the machine has fewer wear parts, to some extent because it does without spindles. 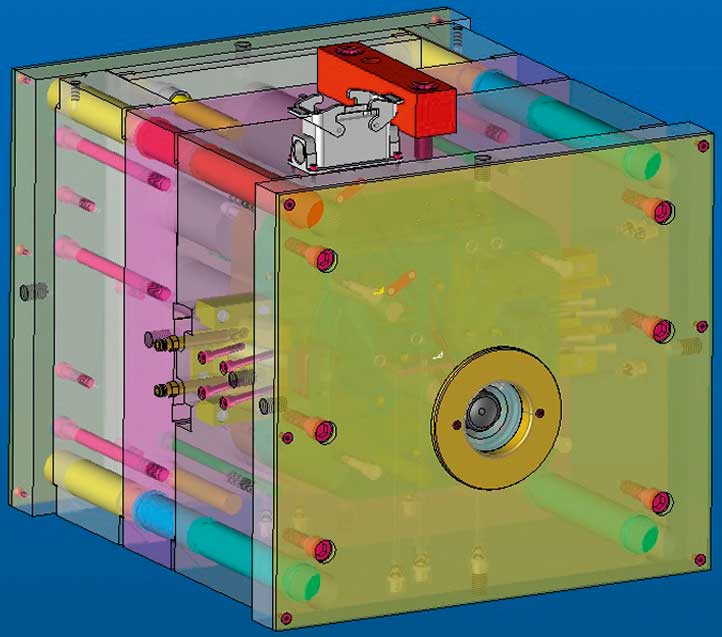 Kröger leafs through his papers. “According to Mitsubishi, the MV2400R Grand Tubular is capable of reducing machining time by up to 17 per cent. For us, the step has been even bigger. This is because we changed to the MV series not from the predecessor model, but from the FX20. This means that we’ve leapfrogged several machine generations in one go.” The operating costs reveal that this performance boost is achievable in economy mode. Mitsubishi Electric has thus reduced energy consumption by as much as 69 per cent over the previous series. 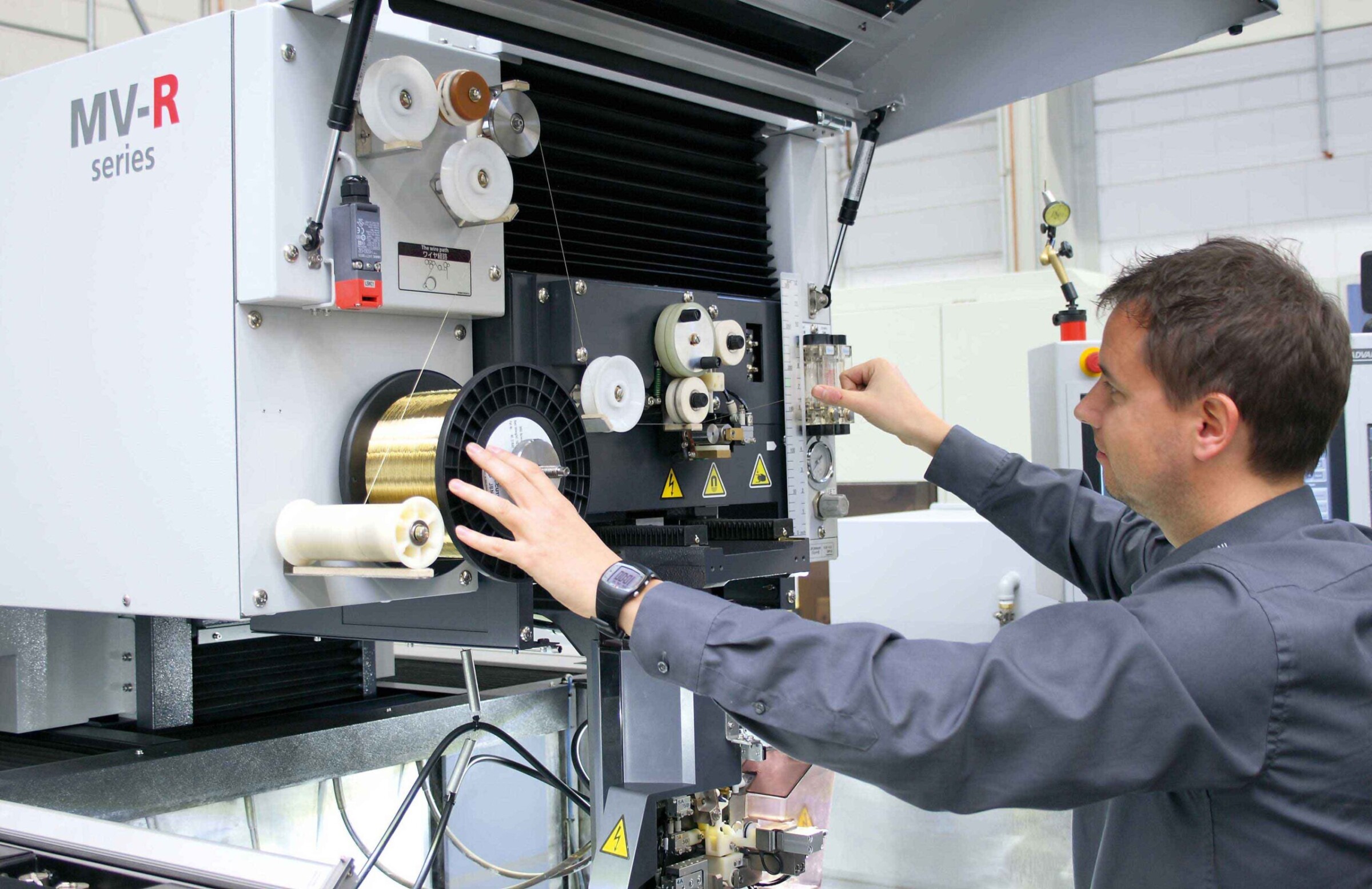 It is very important for Werkzeugbau Kröger that the MV2400R Grand Tubular threads more speedily and neatly.

All in all, Werkzeugbau Kröger benefits from significantly lower hourly machine rates and from the resultant higher cost-effectiveness. These are points that can be decisive for an investment on top of the already attractive price/performance ratio of the MV2400R Grand Tubular.

It is very important for Werkzeugbau Kröger that the MV2400R Grand Tubular threads more speedily and neatly.

Fangmann stands at the console of the ADVANCE PLUS CNC. “Our CAD data are imported straight from the control. And this control is much more straightforward and intuitive to operate than the previous one.” In addition, once he has fed the machine with data, he can let the machine run unmanned at night. And he can sleep peacefully because the toolmakers have had the optional mcAnywhere Contact function installed so that the system texts critical status messages to a defined mobile phone number.
A worthwhile investment

Kröger points to sample parts that have been cut on the MV2400R Grand Tubular and are now in a showcase. “On the basis of my experience to date, the investment in the MV2400R Grand Tubular has paid off. We’ve been able to confirm the practical improvements in efficiency promised by Mitsubishi and the machine has even surpassed our expectations on a number of counts – in terms of short machining times, quick and precise wire-threading, energy efficiency and ease of operation. I expect the machine to have paid for itself within eight years.”

How would you describe in a sentence what your company does?
We produce injection moulds.
How did you earn your first money?
As a toolmaker.
What motivates you?
Keeping up with the state of the technology.
What’s different about how you do things now, compared to five years ago?
We’re much more modern and respond more closely to customer wishes.
Where do you see your company in five years’ time?
I’d like to extend our technical offering.
What was your biggest business success?
Building up the business myself.
What’s your favourite way to relax?
When I can get complete peace and quiet.
What attributes do you value most in other people?
Honesty and good cooperation.
What failings in others do you find easiest to forgive?
Ignorance.
If you were asked what you do by a friend with no technical ­knowledge, how would you explain your work in a single sentence?
We cut metal in the same way as school kids cut polystyrene with wire. 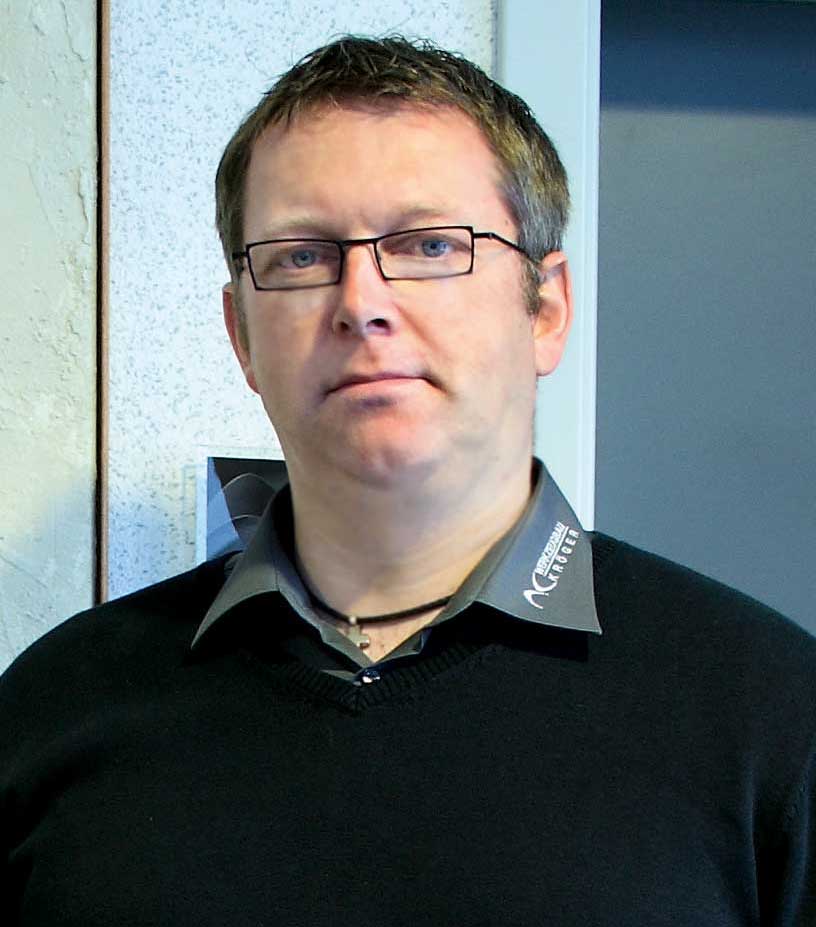