If you haven’t got customers, you’ve got no right to exist, the Dutch say. Not a sentiment to worry Albert van Heugten, a man who’s made his mark with product and delivery quality. 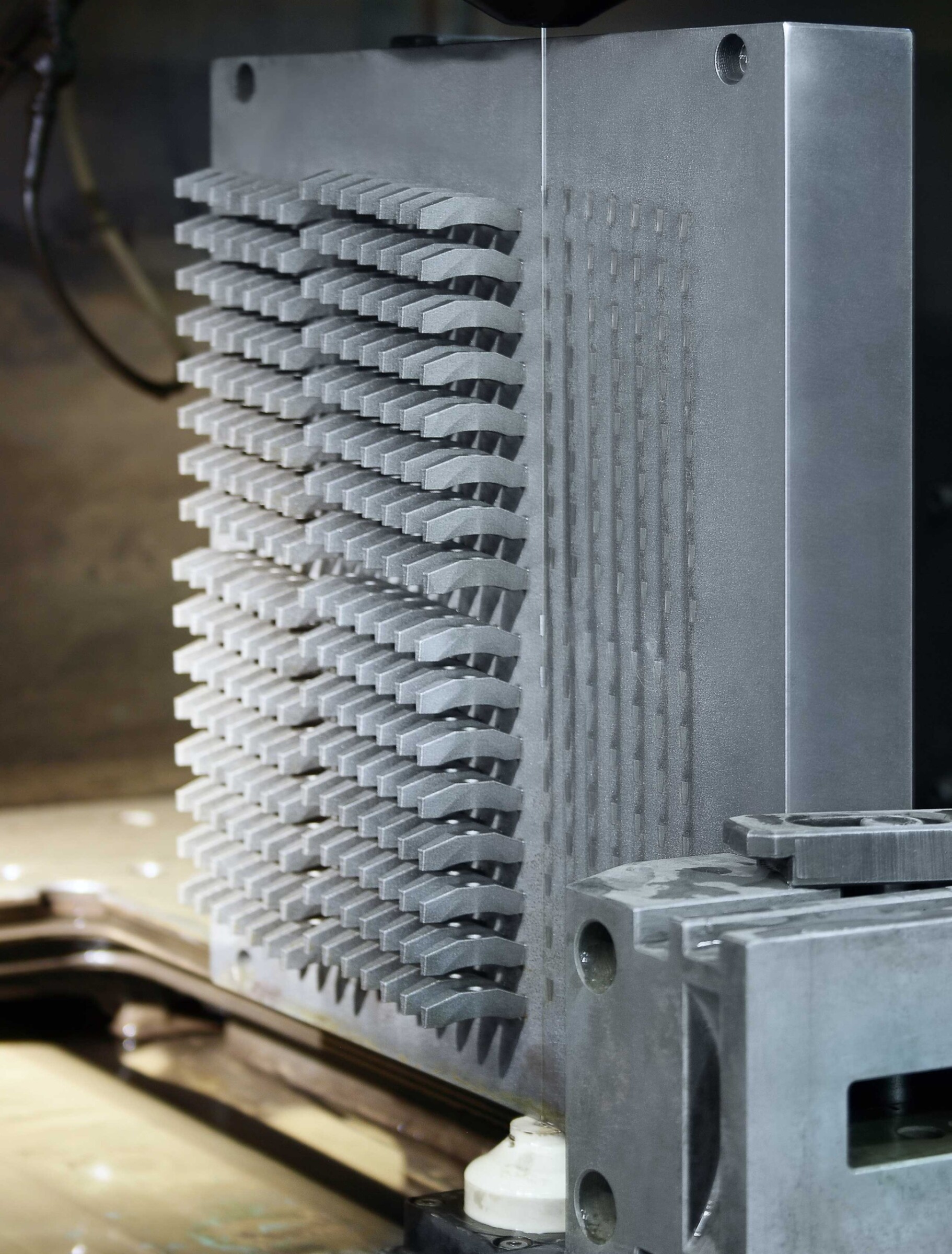 If you haven’t got customers, you’ve got no right to exist, the Dutch say. Not a sentiment to worry Albert van Heugten, a man who’s made his mark with product and delivery quality.

Wire EDM is his life – something you immediately notice when you meet Albert van Heugten. But is the success of Controlled Vonk Technologie B.V. (C.V.T.) in Hoogeloon in the Netherlands entirely down to the owner’s drive?

Everything here is part of an integrat­ed system, from finding the solution and EDM machines through
to logistics.

Van Heugten, a self-confessed workaholic, laughs: “Not only. Our company philosophy is just as important. We aim for topic quality with rapid throughput and punctual delivery. These are anything but empty words, because everything here is part of an integrated system, from finding the solution and wire-cutting machines from Mitsubishi Electric through to logistics.”

EDM skills and honesty as a service

This also applies to the service that C.V.T. offers during job processing. It involves being open to customer requests, taking a holistic approach and pointing out the opportunities for optimisation. On his PC screen, Albert van Heugten opens a picture of a little spiral for X-ray equipment, machined in molybdenum, a high-strength metal. “We advise the customer on the component’s feasibility. Above all, we check whether the demanded quality of cut can be achieved with the given material. If not, we recommend an alternative.” 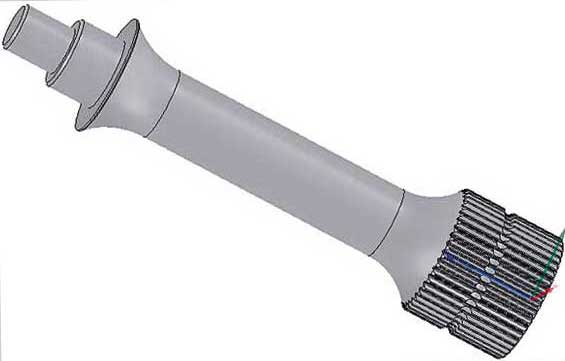 A spiral used in X-ray equipment.

Van Heugten also always highlights the most cost-effective solution for a product. In terms of the range of jobs handled by C.V.T., wire-cutting usually proves to be the fastest and most economical process. One reason for this is that the parts can be stacked for wire-cutting – something that’s impossible with laser-cutting.

Referring to three-dimensional CAD files, Albert van Heugten demonstrates the diversity of products that can be produced with EDM. “If in exceptional cases laser-cutting, turning or etching turns out to be less expensive, we turn down the job and recommend the more competitive method. Honest advice pays off in the long run because you gain the customer’s confidence. This is an advantage that Western Europe as a production location ultimately benefits
from.” But this is not all: C.V.T. shares its expertise with other wire eroders. 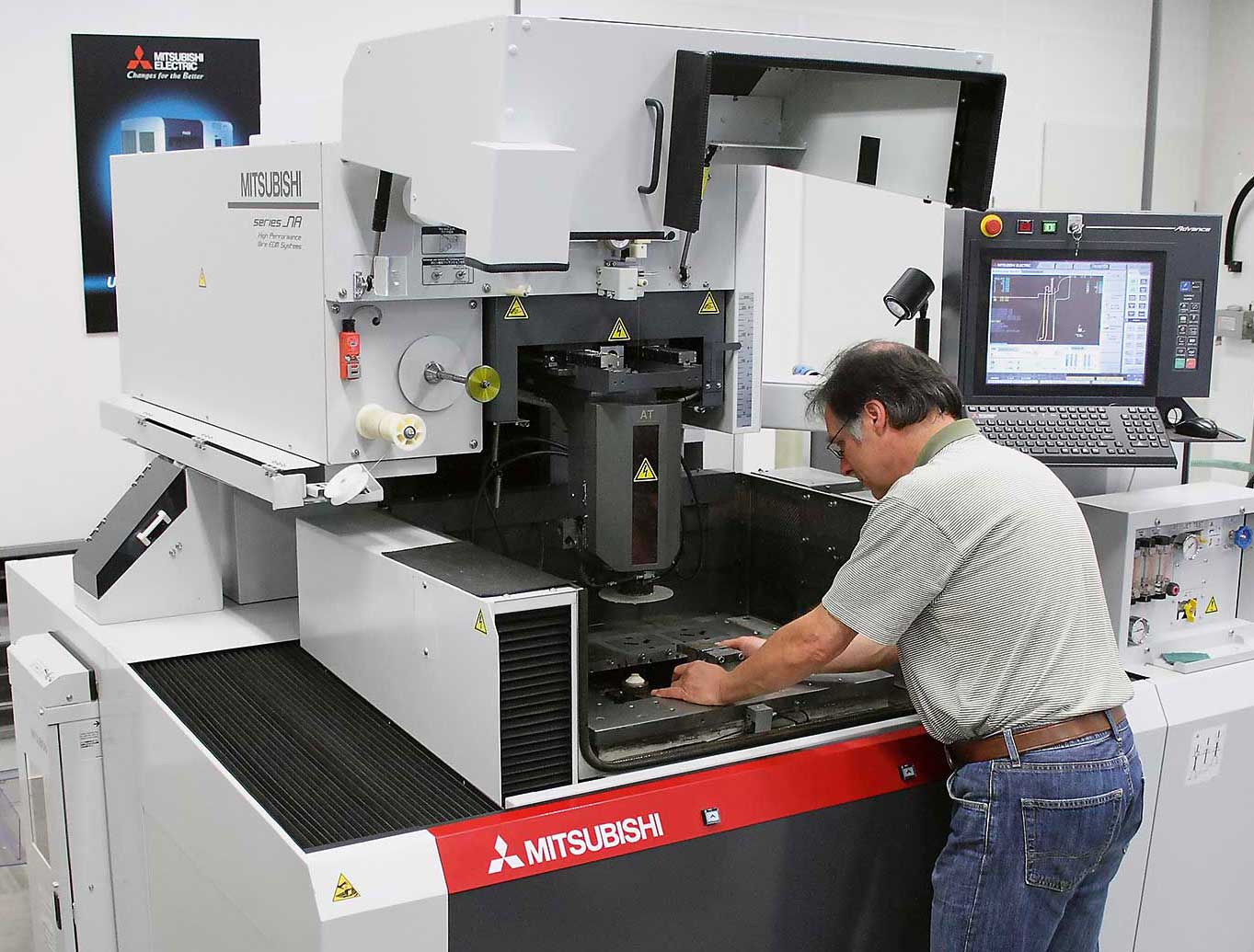 Jos Tiggelman, C.V.T. employee, sets up the NA1200 Essence for the next workpiece.

Heugten doesn’t expect any loss of custom from this, as he has his own highly specialised market niches. In C.V.T.’s view, anyone who wants to establish himself on the market as a competent wire-cutter has to have not only a wealth of experience of eroding processes, but also an in-depth un­derstanding of the machines and of workpiece clamping operations. Van Heugten lays an eroded workpiece on the table that he glued onto a clamp and then measured. “It was our idea to use adhesive in this case. If the workpiece isn’t correctly clamped, stresses may arise that can diminish quality of the component or even destroy it.” As another example of his creativity, the com­mitted wire-cutter takes a circular electrode out of a glass cabinet. After eroding, he manually curved its edge upwards and thus got the component into the desired shape. 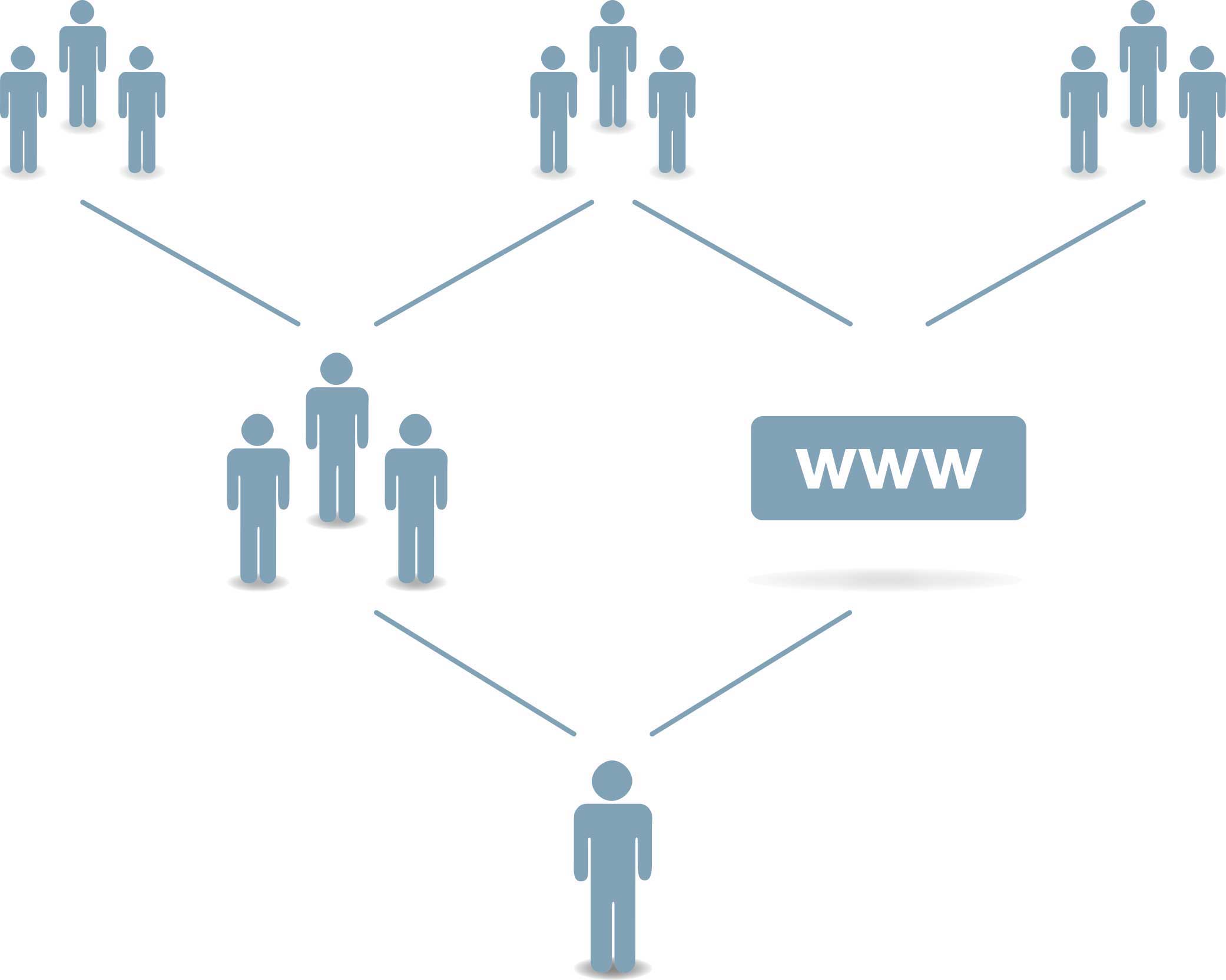 Potential customers arrive via the Internet and by word-of-mouth recommendation.

To make his ideas reality, Albert van Heugten has the requisite machine park. He’s been working with wire EDM machines from Mitsubishi Electric for six years and has absolutely no complaints. With the tip of a pencil, he traces the complex cuts in a 110 x 85 x 20 millimetre plate that he machines in series for the semiconductor industry. “This is the product that our NA1200 Essence handles most.”

The high-precision machine has an Advance CNC control and tubular direct drives fitted with an optical communica­tion system. It’s also equipped with a digital FS generator that facilitates surfaces with mean roughness values of only 0.05 micrometres. On this machine the processing time for the cut plate, with various clamping operations, is 15 hours. Clamped horizontally, three of these components can be eroded simultaneously, and six vertically. One series of these parts, of which C.V.T. pro­duces 400 per year, runs for about 24 hours virtually unsupervised on the NA1200 Essence. The company cuts with 0.25 millimetre diameter wire. For the final cut, it uses thin wire of 0.1 millimetre diameter.

The finished plate consists of two segments that pivot around a defined point without them being separable. Albert van Heugten demonstrates how the two segments can be moved. “We secure the plate during transport by locking the segments. This was also our idea.” He slides two pins into existing openings. “When our customer suggested bolting them together, we proposed these pins as the simplest solution.”

What van Heugten also likes about the NA1200 Essence, which C.V.T. invested in at the beginning of 2011 to extend its production capacity, is its rapid wire change, ease of operation and its virtually alfunction-free running. These are benefits that instil confidence and give him a good feeling about meeting his delivery deadlines.

Along with the NA1200 Essence, C.V.T. has other wire-cutting machines from Mitsubishi Electric: an FA10-S Advance, a PA20 and a PX05. The operator uses the FA10-S Advance for standard applications. As it is similar to the NA1200 Essence in terms of operation and precision, C.V.T. can always quickly transfer its workpieces to the other machine. The outcome is a highly flexible produc­tion set-up that is always capable of squeezing in an extra job. Albert van Heugten places a spiral spring on the table. “Our flexibility is also made possible by the B axes of the FA10-S Advance and of the PA20, with the aid of which we’re able to produce springs like this.”

Viewing the future with optimism

The market has rewarded the approach of the firm that, in addition to wire EDM, also performs measuring, abrading and ultrasound cleaning as services. Not only in the Netherlands and Belgium, which account for about 50 and 30 per cent of the sales of over 500,000 per year (2010), but also in Germany and Switzerland, customers appreciate what C.V.T. has to offer. A relaxed van Heugten leans back in his chair. “The satisfaction of our customers, who mainly come from the semiconductor industry, medical technology and machine manufacture, can be seen if only from the fact that none of them have so far switched to the competition.”

C.V.T. doesn’t even have to actively advertise for business. Poten­tial customers come to Albert van Heugten via the Internet and by word-of-mouth recommendation. Thanks to this comfortable state of affairs, he has every reason to view the future with optimism.

Core business:
80 per cent of sales are generated with the semiconductor industry and machine manufacture, and the rest is contributed by medical technology

Please describe in a sentence what Controlled Vonk Technologie B.V. does!
C.V.T. is a specialist in high-grade and high-precision parts. This applies as much to prototypes as to series production.
How did you earn your first money?
In mouldmaking. After my training, I gathered experience of all forms of machining, i.e. turning, milling, grinding, cylindrical grinding and, finally, wire-cutting.
What motivates you?
Satisfied customers and being able to create something that verges on the impossible.
What’s different about how you do things now, compared to five years ago?
Today I share my knowledge with an employee. Previously, I worked by myself for eight years.
What was your biggest business success?
In crisis year 2009, when we had very little work, I contacted the design engineers of potential customers in order to explain the possibilities and advantages of wire EDM. This proved to be highly successful.
What’s your favourite way to relax?
I’m a workaholic and enjoy working. But I can also relax reading and on holiday.
What attributes do you value most in other people?
Honesty and frankness about their machining work. It’s best not to keep one’s knowledge to oneself. A free flow of expertise is important, because the whole economy benefits. What’s more, the Chinese won’t then be a threat to the Europeans.
How would you briefly describe what you do to someone with no technical knowledge?
I saw complex shapes electronically.

Albert van Heugten founded his first company in 1991. After two and a half years with two employees, he sold the business and became a director of the same firm. With this firm and ultimately 13 employees, he provided EDM and conventional turning and cutting ser­vices. From this company, he launched Controlled Vonk Technologie B.V. in January 2002. In making this move, the spark (the “Vonk” in the company name) has kindled a flame: Van Heugten now concentrates exclusively on EDM technology. 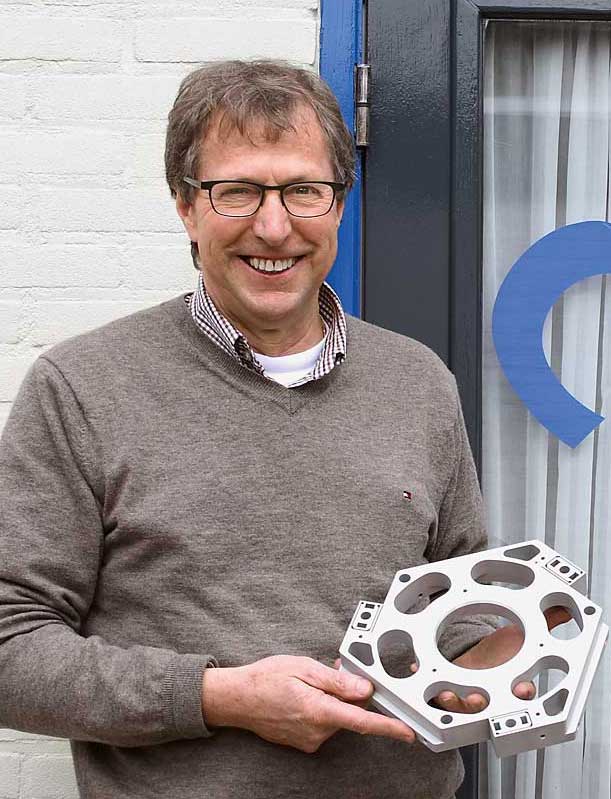