Mitsubishi Electric’s EDM User Forums are extremely popular. Which is hardly surprising, as its participants are not only exposed at these meetings to new trends and technology, but they also benefit from the Group’s accumulated expertise.

Mitsubishi Electric’s EDM User Forums are extremely popular. Which is hardly surprising, as its participants are not only exposed at these meetings to new trends and technology, but they also benefit from the Group’s accumulated expertise.

Since its founding, Lüntech GmbH Erodiertechnik in Werther, Westphalia has made a name for itself beyond the immediate region in the field of electrical discharge machining. In 2000, Karen and Jörg Lünstedt took over what was originally a small one-man business with two EDM machines in a double garage and a small number of customers. The company has grown steadily and now has 300 customers at home and abroad. Customers from the south of Germany, the Netherlands and Scandinavia are now happy to resort to the services of Lüntech. The customers can be found in the automotive, mouldmaking, machine manufacture, toolmaking, food and medical sectors. The focus in the production of components, moulds and tools is in small parts and micro-components, e.g. forming, stamping, injection and embossing tools, gearing, punches, dies and extremely intricate parts for the medical fields.

The company receives a large number of orders for the production of single components, prototypes, and pilot and small series. “In many cases these are also parts that can still be conventionally machined, and are milled, hardened, ground and finished. This series of production methods proves to be relatively costly. In combination with innovative rotary and swivel axis technology and by making use of rotary and indexing axes, such parts can be wire-cut with greater process security and economy,” Jörg Lünstedt explains, Managing Partner of Lüntech GmbH. “The batch size obviously has to be taken into account as well, as the situation for large series may be different.” 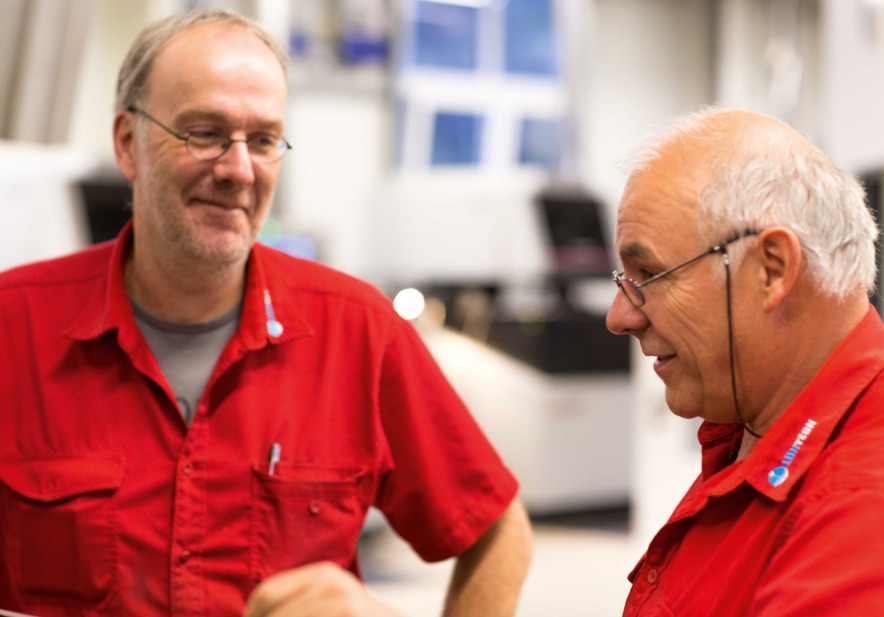 The five-strong Lüntech team has 600 m² of space in the works hall and a further 200 m² in the office wing. In accordance with the firm’s energy conservation strategy, geothermal heat supplied by a heat pump is used together with the heat released by the machines to keep the hall at the right temperature at all times. A photovoltaic installation is also in operation, and rainwater is used in the dielectric tanks and sanitary facilities. The site’s inauguration in July 2013 took place in conjunction with an in-house exhibition, with the spotlight on the newly purchased MV2400R wire EDM machine from Mitsubishi Electric. The machine park today comprises six wire-cutting machines, three ­die-sinking machines and various laser units for engraving, inscribing and welding. 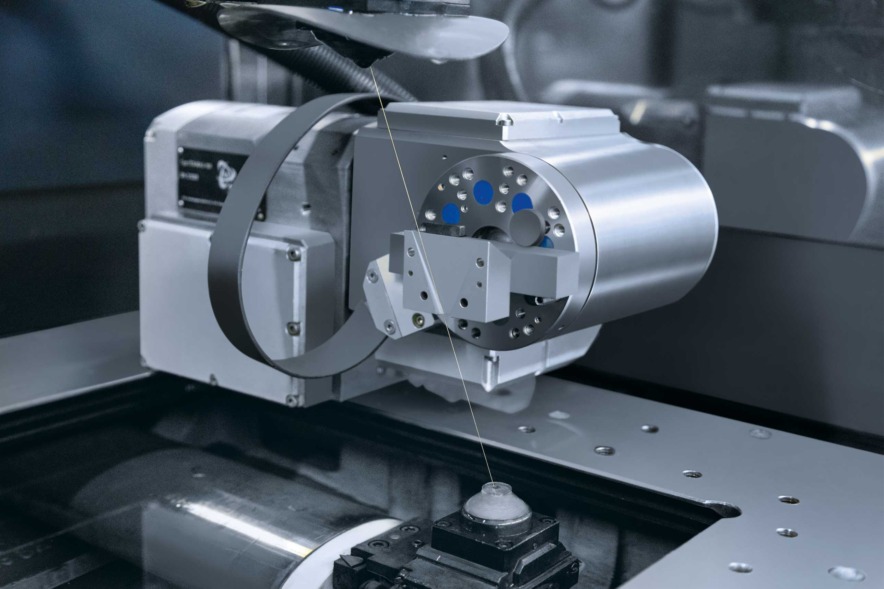 Comparison of taper angle simulated in the half cut model on the rotary-swivel axis.

Purchase of a new CAM system

When they originally took over the firm, the EDM machines and the NC program were no longer up to standard. The company therefore decided to purchase a new CAM system. In 2001, Lüntech in the course of its selection process came across the Berlin software house DCAM GmbH, which at the time supplied solutions for EDM with AutoCAD. The demonstration of a sample program with 50 drilled holes during a visit to a fair didn’t fail to astound. “It took just a few minutes to produce a finished EDM program that I would have needed two hours for with my existing software,” says Lünstedt reporting his first impression. 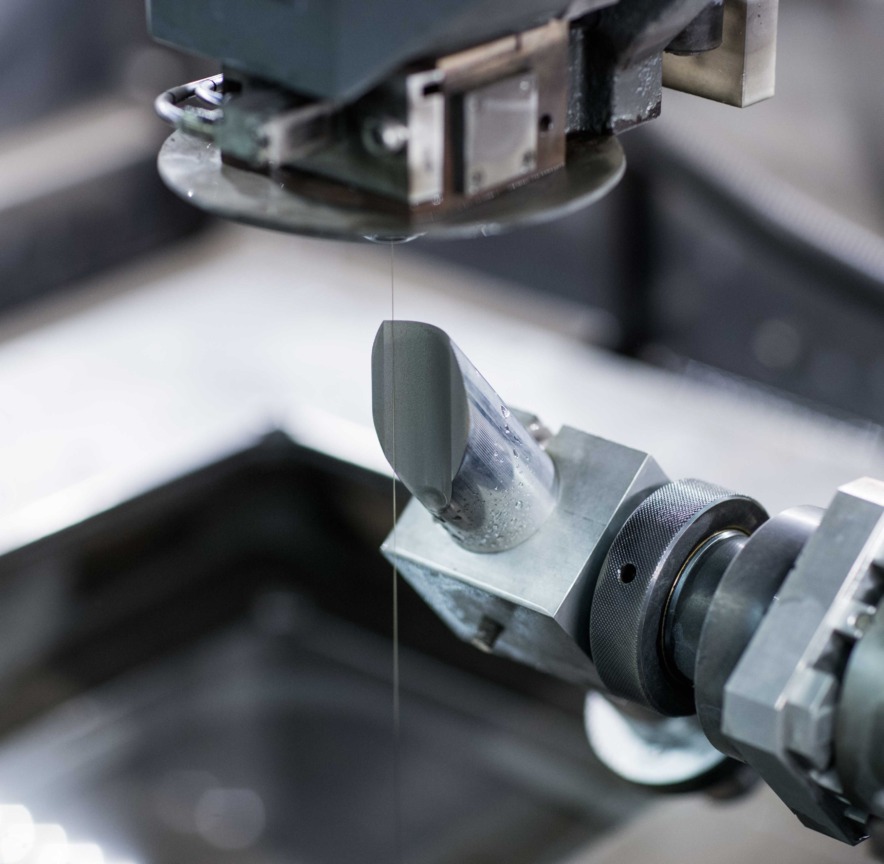 Precision profiling on the indexing axis

For over 20 years DCAM has been exclusively developing and marketing a CAM system specially tailored to the needs of wire-cut EDM. Its goal is to exploit the full productive potential of wire EDM machines with optimised solutions. The DCAMCUT software is modular and can be comfortably operated. The programming process itself is largely automated. In the event of recurrent production tasks, work sequences can be stored in templates that can be simply and quickly retrieved as required. The intuitive operation of DCAMCUT for the simplified writing of NC programs was therefore one of the prime reasons for Lüntech’s investment.

The other reasons included the barrier-free mobility of the data from the importation from all conventional CAD formats via programming and through to the finished NC program, and instructions on the optimisation and testing for possible collisions in the interests of process security in production. Finally, the high level of support and service provided by the manufacturer also was also impressive. In short, by making this investment, Lüntech has improved its competitive position, as the error-free NC programs reduce machine downtime, boost machine productivity and also improve workpiece precision and quality. 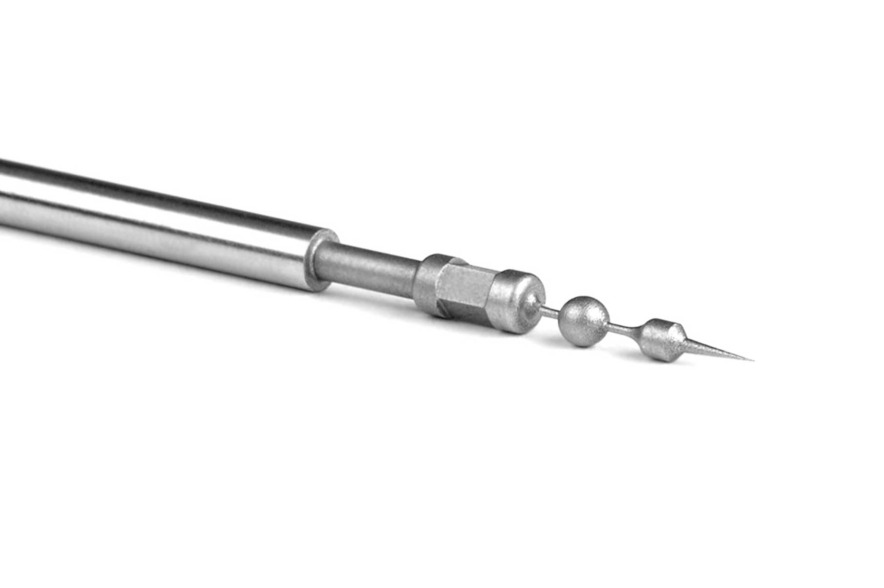 The NC program is produced straight from the given CAD model. As a result, all of a workpiece’s geometry data are automatically integrated in the programming procedure. This means, among other things, that face synchronisation with the inclination of the cutting wire is ensured. During programming and before issuing the control code proper, DCAMCUT automatically eliminates the weak points that may arise, for instance, in connection with NC processors. With plain-language system messages and visual highlighting, the program draws attention to critical program sequences and sections in the 3D model and in the control code. Time-consuming trouble-shooting within the NC program is thus rendered superfluous. The manual error rate is significantly reduced as a result.

DCAMCUT also has an integrated NC browser. This graphically displays any geometrical elements omitted due to offset formation and additionally marks the affected NC code sequences. “The processes between NC machines and the programming system merge seamlessly into one another. We have therefore fully benefited from the close cooperation between Mitsubishi Electric and DCAM,” Lünstedt claims. In the last few years, Lüntech has been at the forefront of a number of major improvements in the ­programming system. The 3D kernel was first modified in 2001. This was followed by the step towards the “think3” version in 2003. Owing to constant further development of the software and new updates, the user has had full 3D capability at his disposal since 2006, permitting the generation of even more efficient NC programs. Essentially, all parameters can be automatically adopted, so only height and surface quality have to be separately defined. Once finished, the programs will run immediately on the machines. 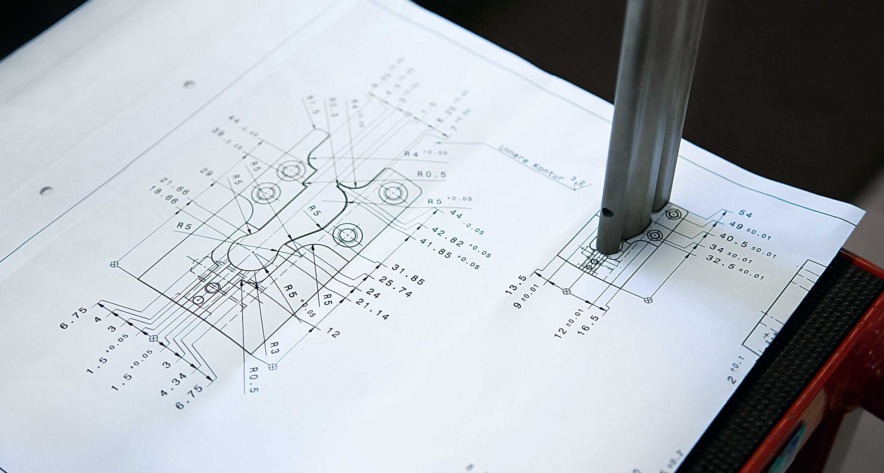 Cut-out portion 1:1 with the technical drawing

Since successfully upgrading to SolidWorks OEM as the basis in 2009, the programmers have been able to use further, high-performance features. It is now, for the first time, possible to integrate multi-axis ­machining in the production process. This gives rise to considerable improvements, such as shortened tooling and machining times. Contours whose continuity, e.g. from bottom to top, in the workpiece – in the form of an undercut – is not obvious to the programmer can even be programmed in 2½D. 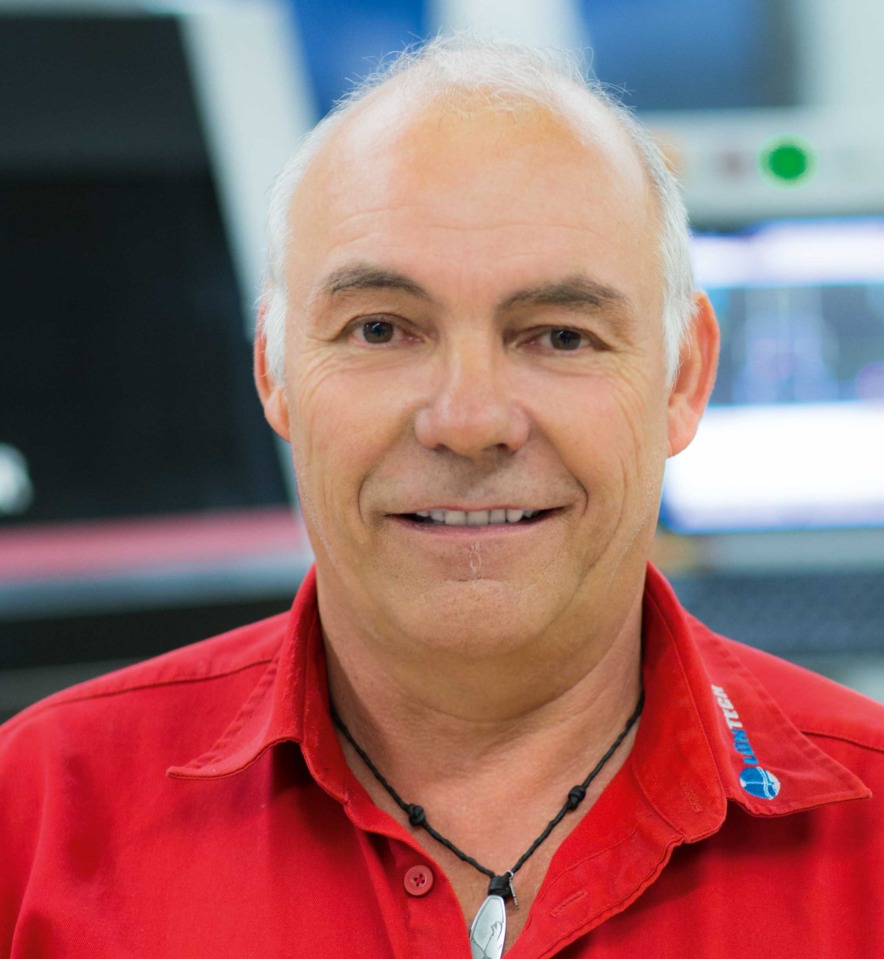 The processes between NC machines and the programming system merge seamlessly into one another. We have therefore fully benefited from the close cooperation between Mitsubishi ­Electric and DCAM.

The system itself searches for the nearest eligible face and reports it to the programmer as a suggestion. Account here is taken of the fact that the cutting wire always moves rectilinearly in space on the x, y and v axes. The advantage of multi-axis wire cutting is that the workpiece is machined in a single clamping or simultaneously from several sides. Particularly worthy of note is that the offset calculation is extremely accurate and also takes account of slopes in the contours in relation to the always linear kerf. 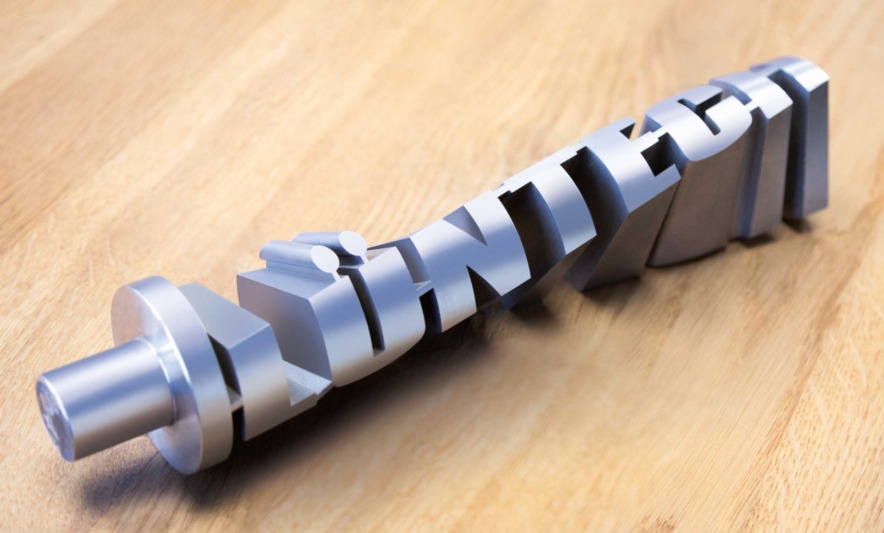 The procedure for NC programming is visualised 1:1, i.e. in 3D, which users rate as very convenient and user-friendly. Various plausibility and collision checks are available. The programmer sees the approaching wire and recognises the area of the component it is currently moving in. In overlaid windows, the NC controls for a sequence or block are automatically indicated. If after production of an NC program a model change becomes necessary, DCAMCUT responds fully associatively and autonomously recomputes the interrelated machining ranges. This high transparency and these process analyses yield optimisations, exclude error sources and contribute to greater process security. 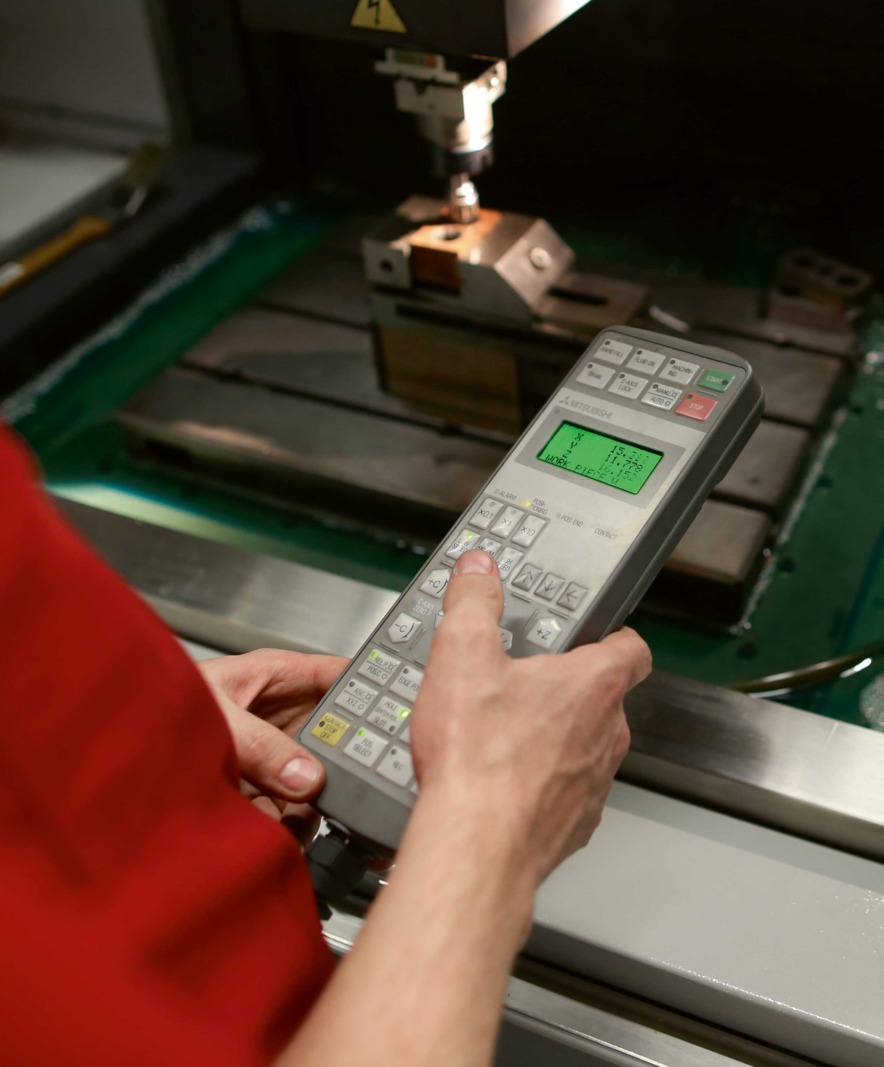 Cost savings with consumption of materials

“The faster flawless and optimised programs are produced, the higher machine capacity utilisation is as a consequence,” says the businessman. After changing in October 2014 from Version 8.1 to 8.2, the company’s productivity has been improved yet again with the aid of new software functions. Thus the programming effort during “Adaptive clearing in 3D” has been reduced by 60 to 70 per cent. Previously a succession of individual segments were generated and completed. “Overall we have become about 50 per cent more efficient than when we got started. If one considers overall costs, the savings in time are joined by reduced filter consumption for the dielectric and reduced wire needs. These savings are the direct result of the machine’s optimised cutting behaviour,” says Lünstedt summing up. 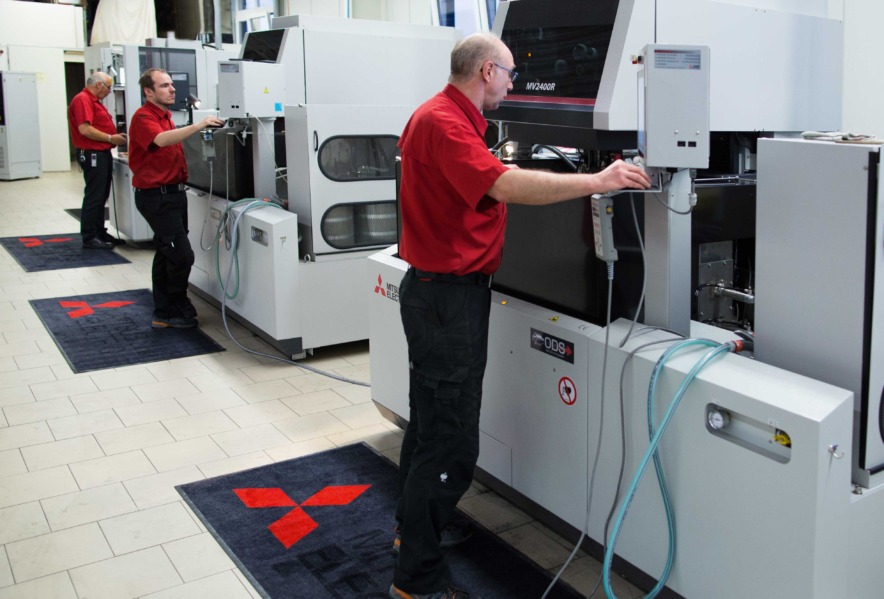 Two current MV2400Rs in action, with the new EA8S in the background

Boosting efficiency by 50 per cent.

“We’re very happy with the service provided by DCAM and feel well looked-after. We never have to wait for help with any questions that crop up, be it directly over the hotline or by remote administration of the local programming system. Workshops are also regularly held and participation is borne by the ‘spirit of a big EDM family’,” Karen Lünstedt reports. “Not many EDM specialists in Germany have such a broad production range as we do. We carefully analyse the feasibility of each order. On top of this, we serve our customers with high flexibility and rapid response. The positive feedback from our customers is a vindication of our decision to choose DCAMCUT.”

From the central programming area, the employees always have a clear view of their modern machine park. 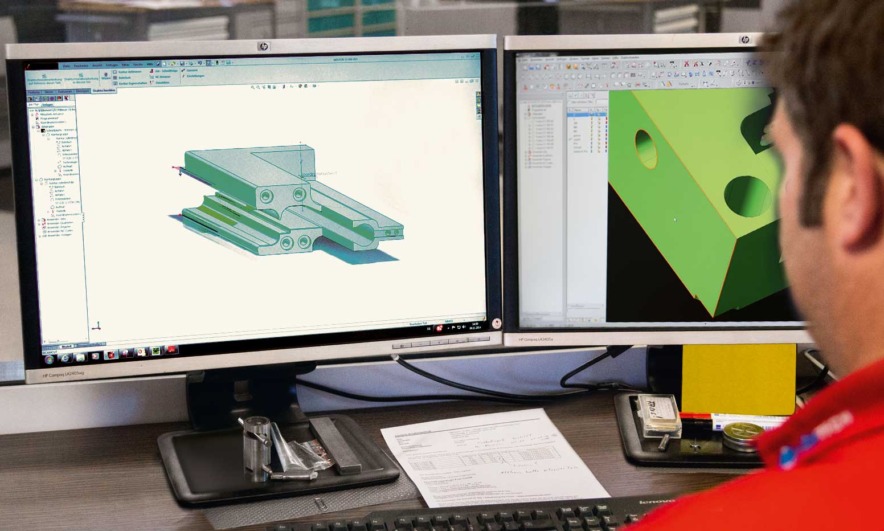 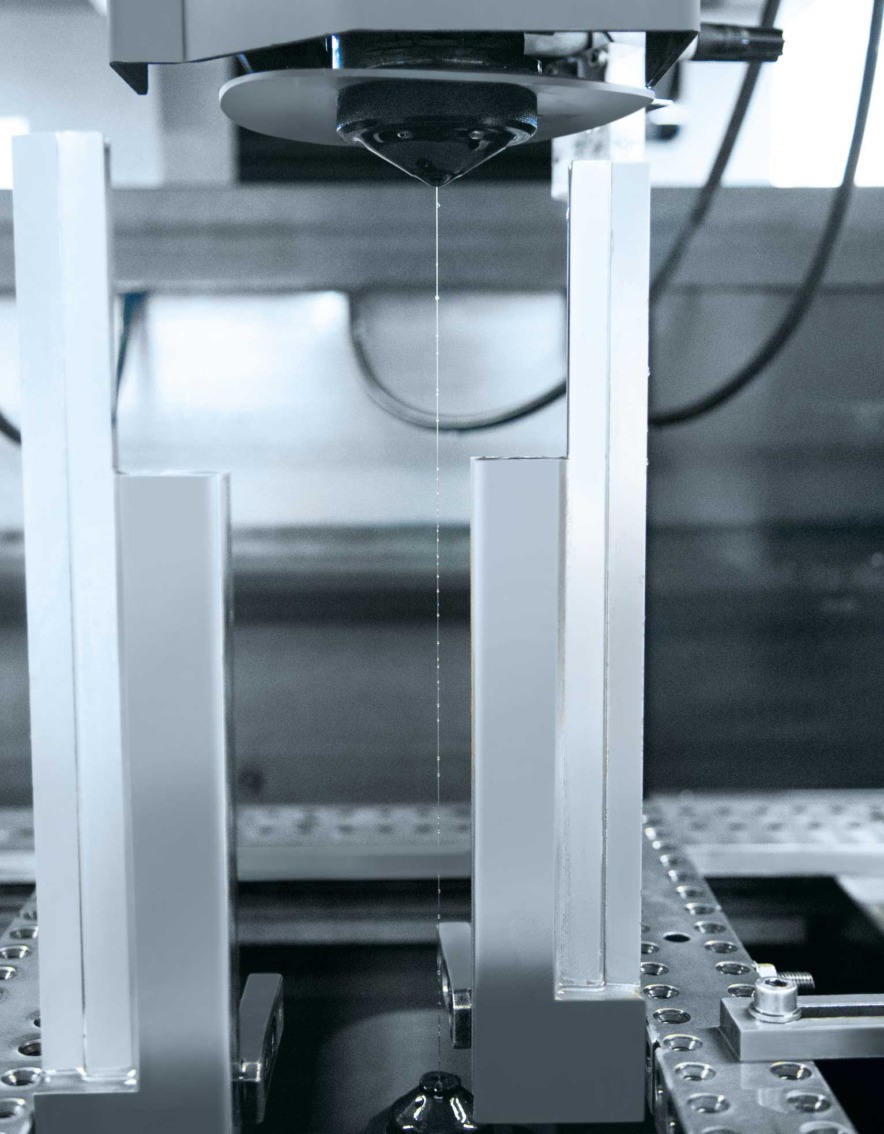 Cutting a profile contour at a height of 300 mm 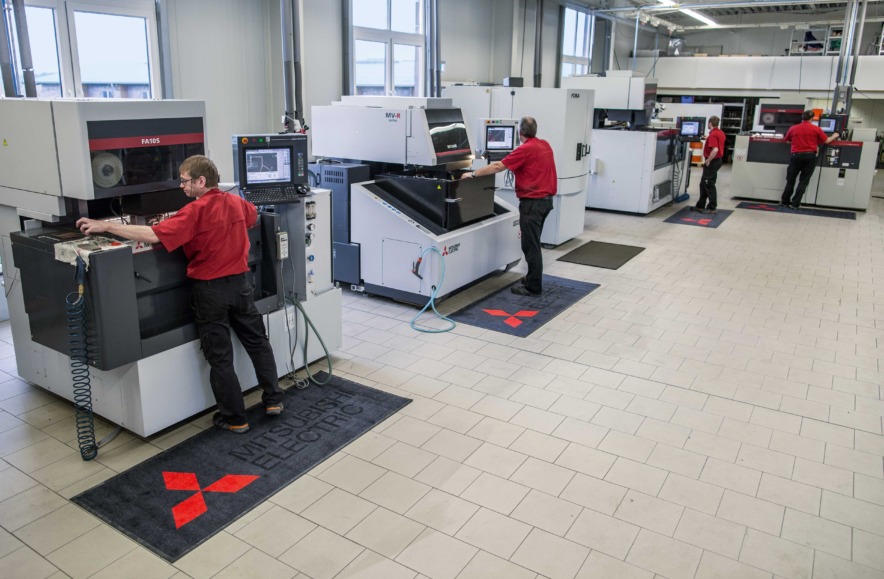