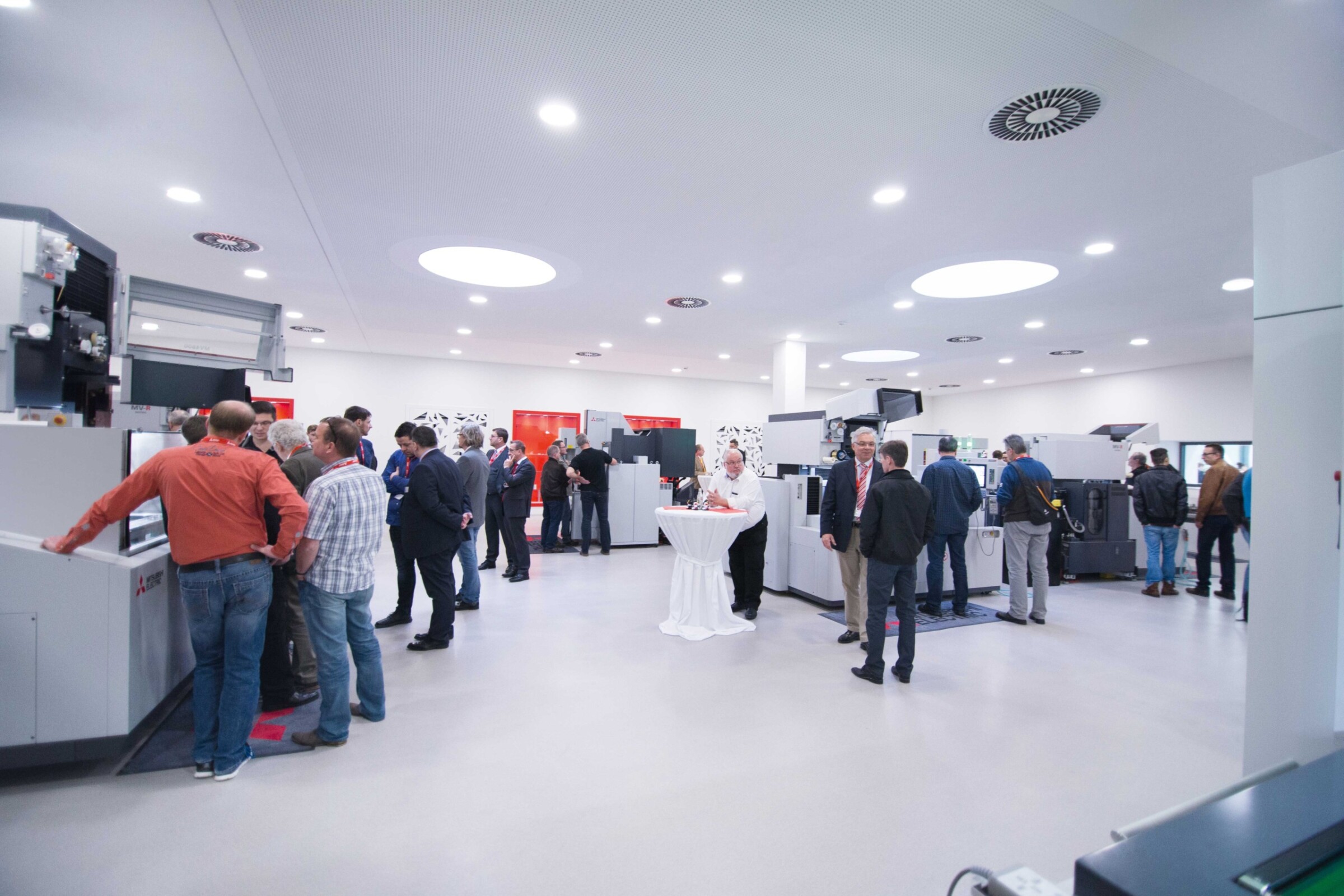 Mitsubishi Electric has officially opened its new EDM Technology Centre in ­Ratingen with a customer event. The turnout was remarkable. 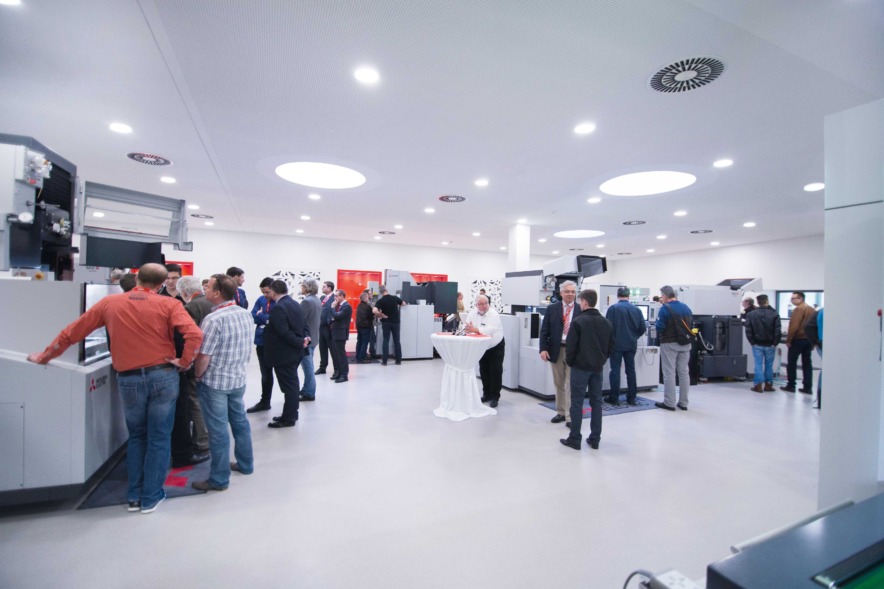 Big, bright and beautiful – the new Technology Centre in Mitsubishi Electric’s newly occupied German headquarters in Ratingen was a magnet for customers. Invitations had been sent out for the official opening of the new facilities on 21 and 22 April. “We received some 130 registrations, and in the end about 200 customers came,” says a gratified Sales Manager Hans-Jürgen Pelzers in his reaction to the huge turnout. But it was not only the large number of visitors that gave cause for satisfaction. With their thoroughly positive comments, the guests left Mitsubishi Electric in no doubt about their appreciation of the new Technology Centre. Like the Training Centre, the Technology Centre is accommodated on the ground floor of the German ­headquarters in the east of Ratingen, the construction of which was completed last autumn – well served by the A3 motorway and only 10 minutes away from Düsseldorf Airport. “The whole building is a statement, lending expression to our strength and innovative powers as well as our goal to grow further in Germany,” commented Akihiro Kawata, Senior Manager Industrial Automation Machinery at Mitsubishi Electric, who had travelled to the event from Tokyo. In the spacious foyer of the new building, high-tech Mitsubishi Electric solutions and products can be seen, such as industrial robots and intelligent technology for tomorrow’s energy infrastructure. In addition, by using the almost man-high and four metre wide touchscreen, guests were also able to gather information on the Group’s product range, and, importantly, a large part of the in some cases futuristic-looking building services come from the company’s own product portfolio. 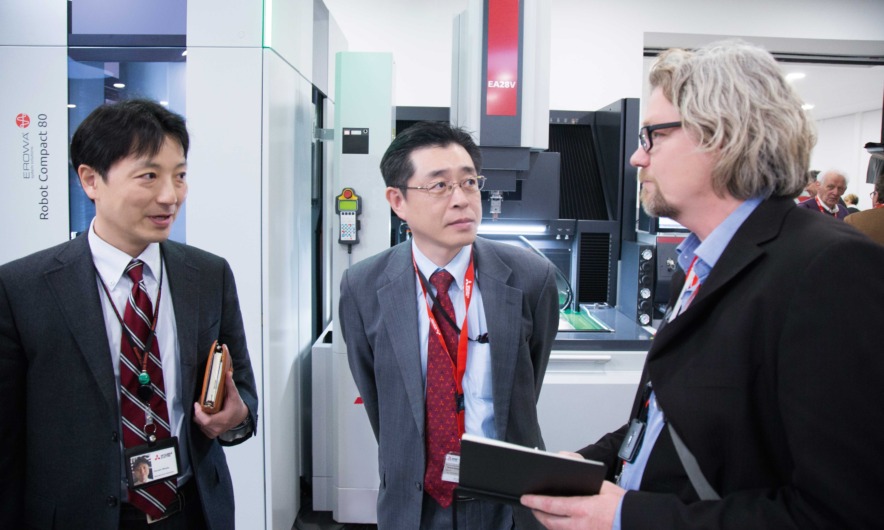 Guest from the Far East: Akihiro Kawata (centre), Senior Manager Industrial Automation Machinery, travelled from Mitsubishi Electric’s headquarters in Tokyo to the official opening of the Technology Centre in Ratingen.

As hoped, visitors were impressed by the new building and its contents. “It looks prestigious and reflects the company’s standing. We feel very much at home,” said Dirk Stein and Jürgen Compans of Günther Spelsberg KG in Schalksmühle. But even if the new building was a big talking point among customers, the focus of attention was nevertheless on the exhibited machine park in the Technology Centre. And here again, the opinions of guests left nothing to be desired. “It’s certainly not commonplace to see such a big ­selection exhibited in one place. Mitsubishi is clearly a step ahead of the competition in this area as well,” was the personal verdict of Bernd Brandes, Managing Director of WTL Erosionstechnik in Lohfelden near Kassel. It was all on show – everything from start-hole drilling machines and wire-cutting systems of the MV and MP Series and the MX600 with an oil tank through to the die-sinking machines of the EA-S and EA-V Series. Automation was also demonstrated in the shape of an EROWA ro­bot on a die-sinking system. In addition to the Technology Centre, the Training Centre has undergone an upgrade at the new site. Wire-cutting and die-sinking systems and control simulators are all kept here to make customer training even more professional and authentic. Training, seminar and conference rooms are available with advanced equipment throughout the new building. All areas are now clustered together and the walking distances for customers are short. “It is an extremely presentable Technology Centre,” said Uwe Birke from Hasco Hasenclever in Lüdenschied, putting it in a nutshell. On both days, service and sales staff of Mitsubishi Electric showed visitors around the facilities and explained the features of the current machines such as the maintenance-free Tubular Shaft Motor, the ingenious wire threader and the nPV generator for nano-precision machining results. “It is a fine opportunity to find out about new developments and talk shop with the Mitsubishi experts,” said Klaus Daniels of Sieber Forming Solutions. 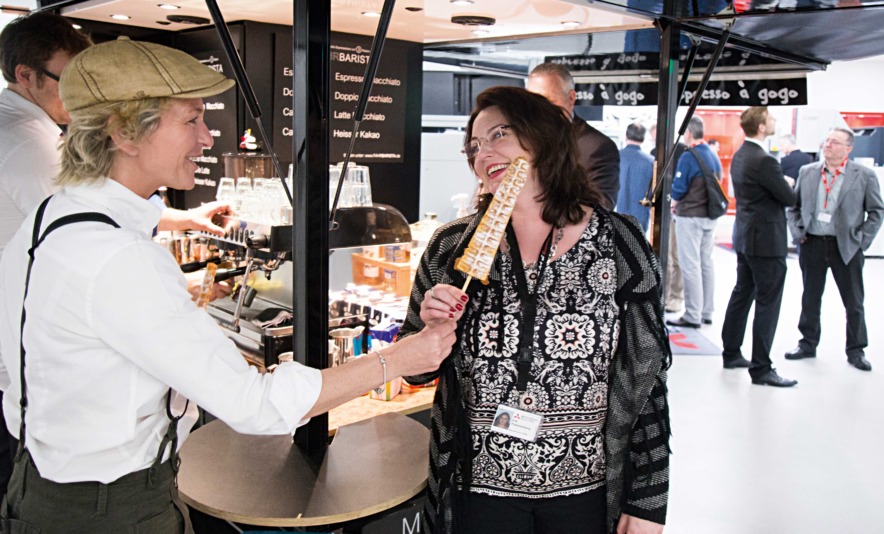 As well as talking shop, there was also time for a cappuccino or a freshly made waffle at the Fahrbarista mobile coffee stand.

A strong partner in the long term.

In addition to the general interest in the Technology Centre and machines, by no means few customers came along with definite purchasing intentions. “We always want top quality and therefore replace our machines every five to six years,” reported Marcus Herse of Huf Tools in Velbert. The next wave of replacements is fast approaching, so the inauguration of the new Technology Centre was a welcome opportunity for getting to know the latest machines. Michael Nickel and Patrick Stüven from AES Maschinenbau in Bielefeld have made all the necessary arrangements in the last few months. “The contracts are ready for signing,” said the two toolmakers who will take possession of a new MV2400R wire-cutting machine in May. Alongside the signing of contracts and technical discussions, there was also time for a coffee specialty from the mobile coffee stand and for delicious finger food. In the relaxed atmosphere, customers again expressed their appreciation of the excellent after-sales service of the Mitsubishi Electric team. “Their support is unbeatable,” said Alex Knelsen of Buschhoff Stanztechnik in Cologne, outlining his experience. “The machines are supposed to run 24 hours a day if need be. So in an emergency, I don’t want to be a number placed on hold, but I want to talk to an expert without delay. Mitsubishi makes it possible. On top of this, the service technicians offer in some cases very pragmatic solutions that are an immediate help,” Knelsen explained. Klaus-Dieter Lohse of automotive component supplier ZF TRW summed up the exemplary service to customers in the following words: “Mitsubishi sells its first machine through sales and the second on the strength of its service.” 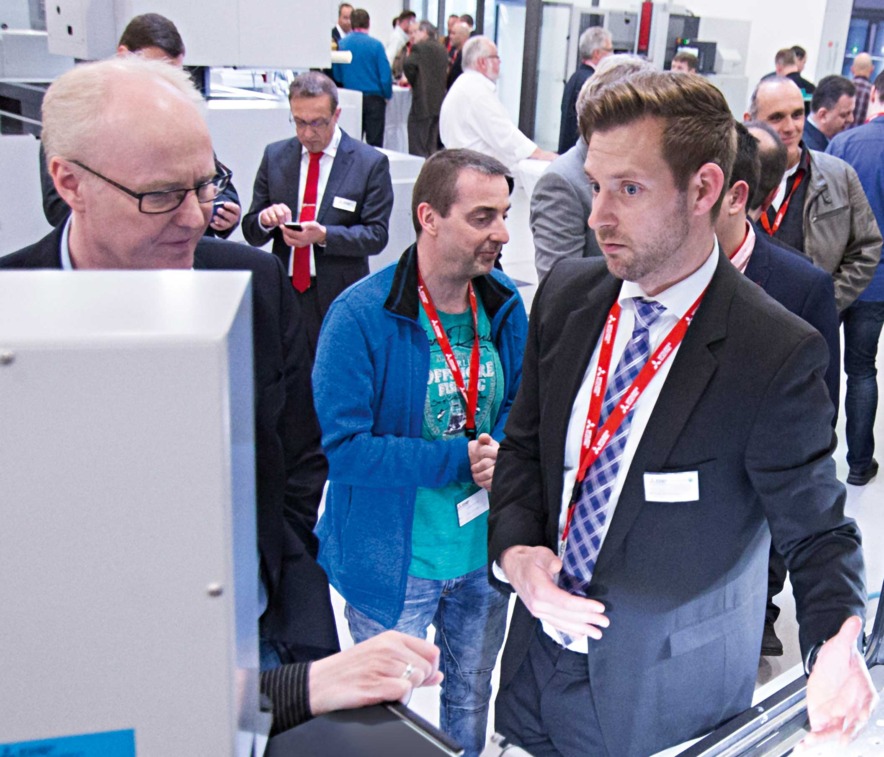 Roughly 200 customers came on the two days of the event – many more than expected.

Sometimes, it’s even more – as in the case of Dieter Ott of automotive component supplier Frimo. “We’ve had good relations with Mitsubishi for many years. At the moment, we’ve got two machines in a use, and the third is in the pipeline.” Aided by the service team, Ott examined in detail his machine of choice, an MV2400R. Someone else who came along with definite plans was Mirko Trentzsch, Managing Director of Werkzeugbau Trentzsch in Radeburg. “Our order situation is very good. We’ve got two wire-cutting EDMs in operation and could now do with a die-sinker so we can also ­machine exotic materials.” He was accompanied by Siegried Hillig, the founder of Werkzeugbau Trentzsch. He was in fact one of the very first toolmakers to work with a wire-cutting machine. “We bought our first machine back in 1971,” said Hillig recalling his time in an East German combine, adding with a laugh: “That one worked with punched cards.” After reunification, he founded his own firm. Hillig has now left the firm, but is still on hand as a consultant. His decades of experience of markets, machines and manpower are invaluable. What did he think about the new Technology Centre? “It’s become very obvious to me that Mitsubishi is still very forward-looking,” said Hillig. The prospects of having long-term support from a strong partner he finds very reassuring – and he’s not alone.

Catching up on the latest developments, passing on tips and meeting old acquaintances – there was a lively exchange of information between customers and ­employees on the two days of the opening. 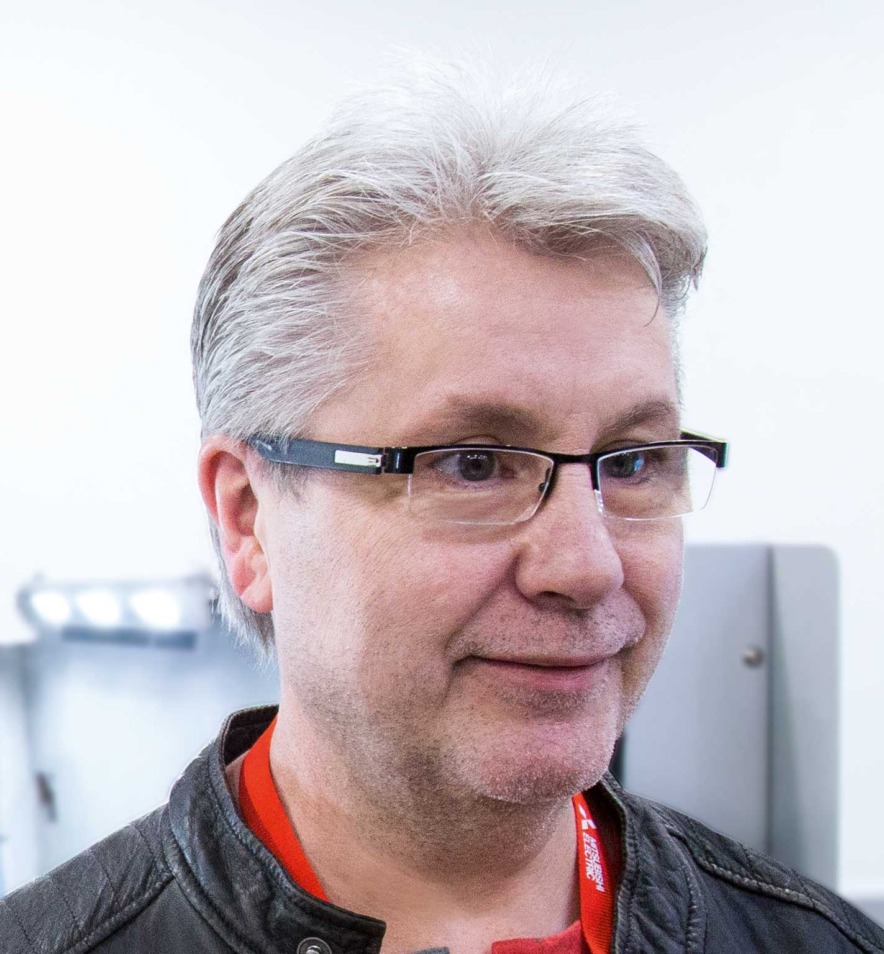 It’s certainly not commonplace to see such a big selection exhibited in one place. Mitsubishi is clearly a step ahead of the competition in this area as well.

The new German headquarters of Mitsubishi Electric in Ratingen is geared to eco-friendliness and ­energy efficiency from top to bottom. Air conditioning, heating, lighting and water – all energy flows and consumption have been optimised. To this end, Mitsubishi Electric’s Factory Automation Division has equipped the new building with numerous intelligent components and products. Special software (Mitsubishi Adroit Process Suite) optimises and automates the interplay of all the elements and centralises the control of the overall building services. For its efforts, Mitsubishi Electric has received LEED (Leadership in Energy and Environmental Design) Platinum status – the highest award that can be conferred for resource-conserving and sustainable ­construction. 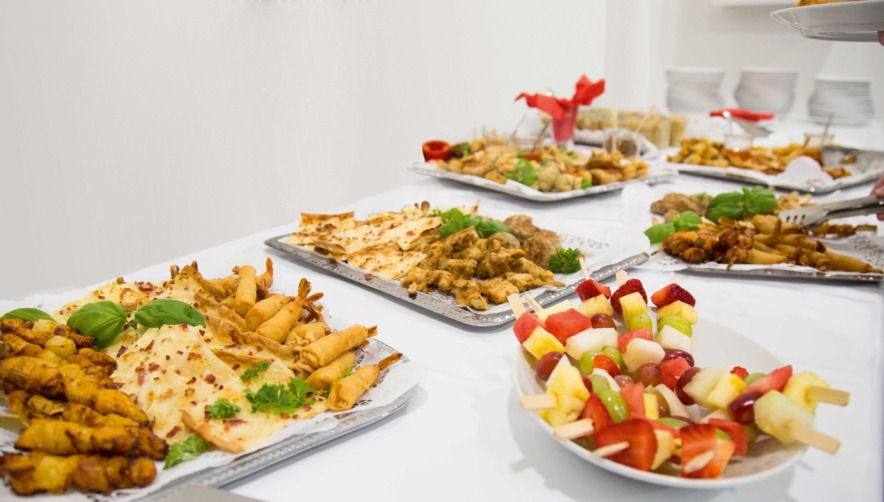