The word “bonsai” means literally a tree or plant in a bowl. The name says what it is. In many cases, scenes and natural shapes – such as wind-blasted, lopsided mountain spruces – are replicated in microcosm and look precisely how Mother Nature would have formed them in their natural setting. 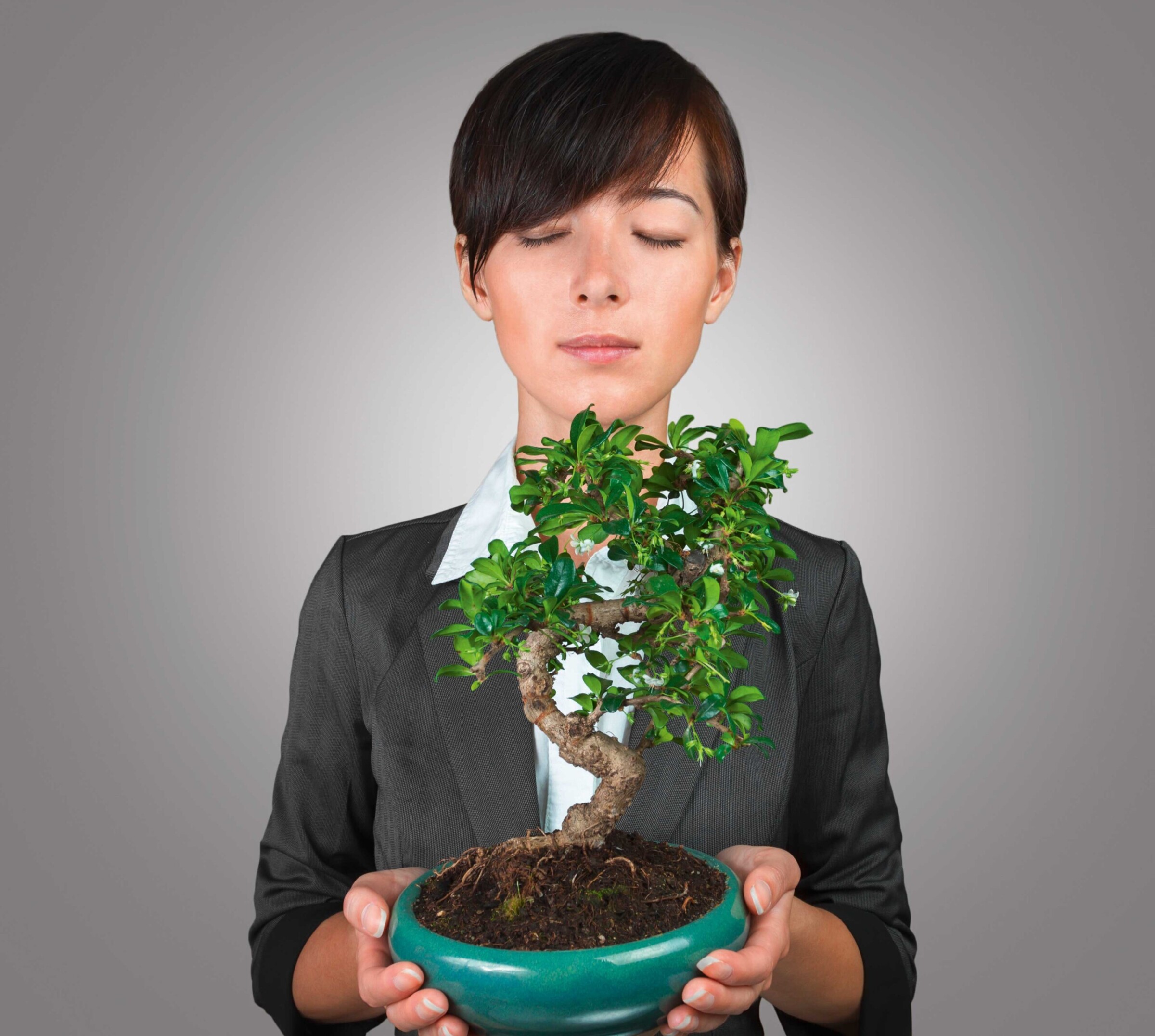 The word “bonsai” means literally a tree or plant in a bowl. The name says what it is. In many cases, scenes and natural shapes – such as wind-blasted, lopsided mountain spruces – are replicated in microcosm and look precisely how Mother Nature would have formed them in their natural setting.

In fact, anyone who has ever looked at a bonsai nurtured by a master knows that we are talking here about more than just a tree. Because the moss growing at the foot of the miniature tree, stones that look they’ve been shoved here by a landslide and even figures can contribute to the overall arrangement.

Decorative skills and precision are required

If you look at it like this, artists and designers can really go the whole hog on a bonsai. Some of the little trees have a single trunk, while others come in twos and threes. A bonsai can stand by itself or form a glade or short avenue. You are free to do as you please – a tree in a bowl can blend in with the rest of the interior decoration. For instance, by placing it on an Asian cabinet, in front of illustrated scrolls with matching motifs or in front of a screen adorned with Oriental stylistic elements. 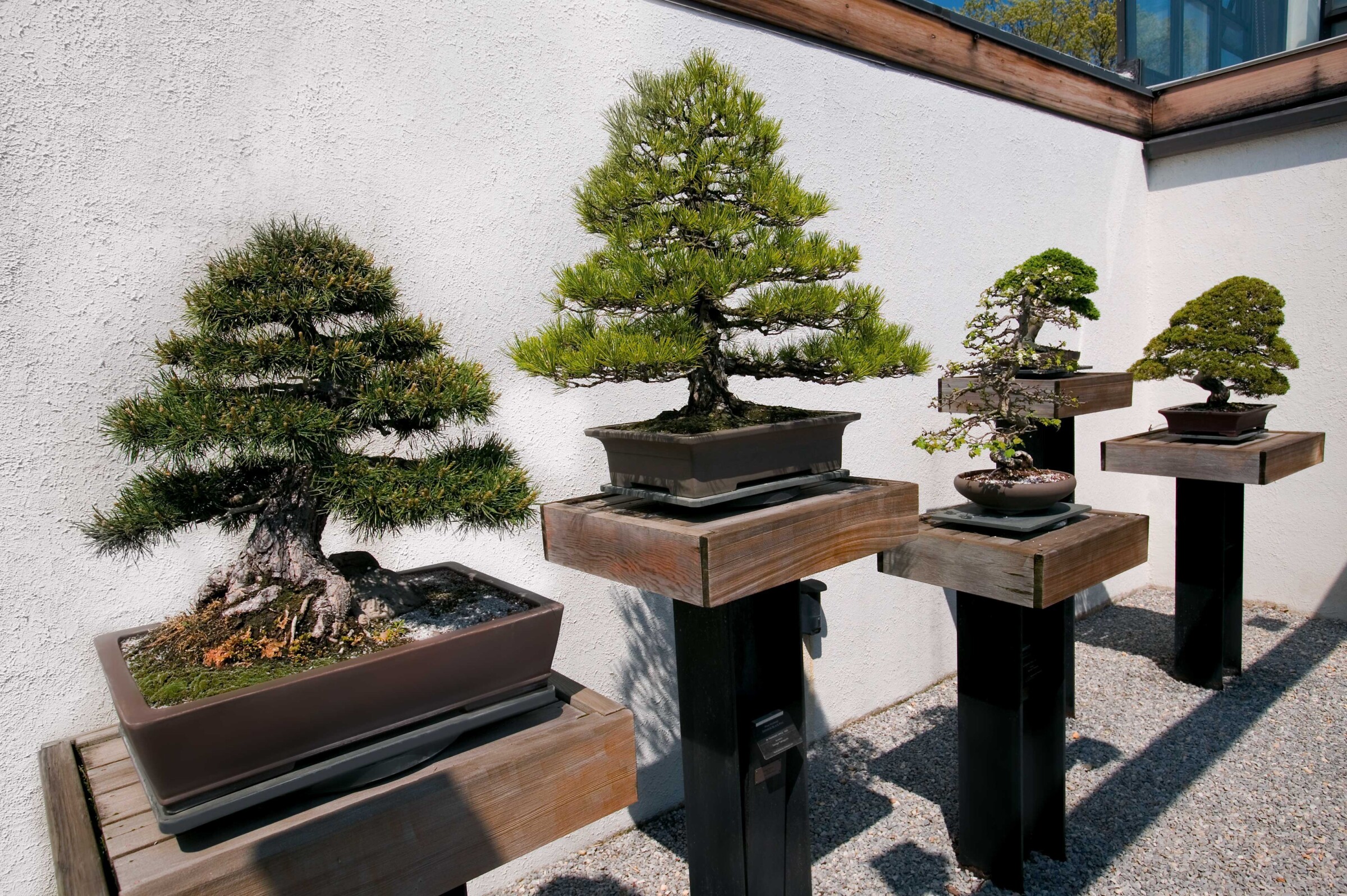 The once so exotic-looking bonsai has meanwhile found aficionados all over the world.

On the subject of bowls, the container is capable of contributing a great deal to the overall work. Some have plain rectangular or oval shapes so that they do not divert attention from the central feature, the tree itself. The bowl itself, however, can also be very striking, have zigzag edges, or a bonsai, a popular stylistic feature, can appear to grow out of a stone. In the film “Karate Kid”, in which caretaker Mr Miyagi (alias Noriyuki “Pat” Morita) teaches his hothead novice not only the martial art of karate, but also self-control, composure and the precise use of the bonsai shears, we learn that the care and pruning of a bonsai, at least in the Far East, is an almost meditative act. At the same time, bonsai gardeners, however regimented the treatment of these miniature trees may appear to be, are relative free in their choice of vegetation for potted cultivation. Pines are popular, although juniper and European larch are also worthy of consideration.

Well-tended, a bonsai can be passed on to one’s
children and from them to one’s grandchildren.

Naturally flowering trees are particularly impressive. You can thus find bonsai azaleas. At the same time, maple, various elms and the Japanese apricot can be fashioned into attractive miniatures. Today, most of these plants come from seeds and cuttings, although digging up bizarrely shaped trees in the wild is still very popular, especially in Asia.

Of course, any would-be bonsai grower should take pains not to let his love of creative pruning run away with him. Because even if the fukinagashi, a crooked tree with its branches and foliage blasted and dishevelled by mountain gales, or the nebari, a bonsai with exposed and visible roots, are legitimate and popular stylistic features, the natural shape of the tree should never be lost. In other words, whether a group of trees or glade around a central tree is imitated, whether the bonsai is placed on a stone (ishizuke) or simply stands as a solitaire in its bowl, the ensemble as a whole must still be a replication of nature, which is why upright trunks and the broom shape (hōkidachi) characteristic of German broad-leaved trees are also very popular. 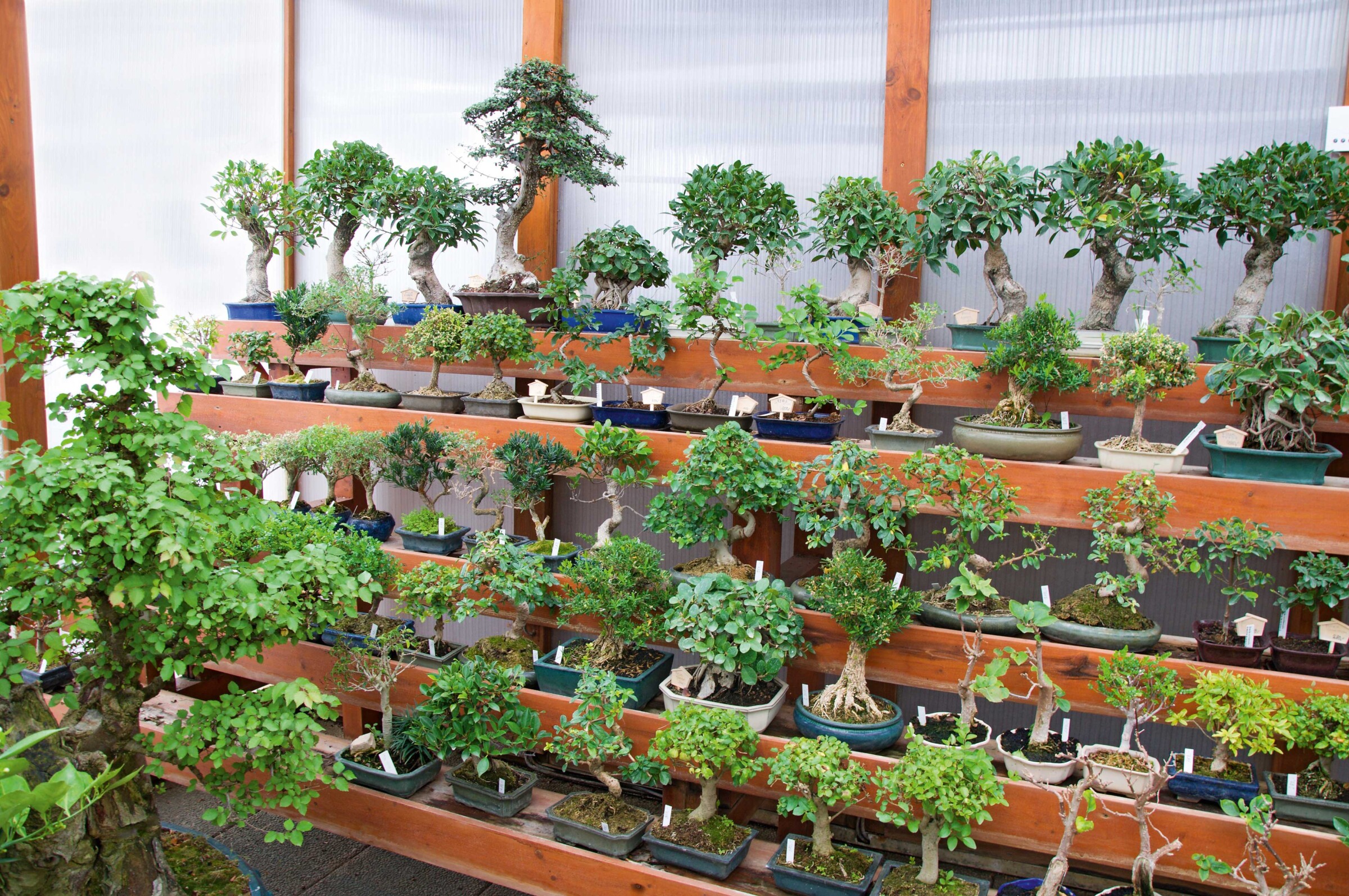 A companion for life

At the same time, the potted miniature can grow as old as its model in the wild. Well-tended, a bonsai can be passed on to one’s children and from them to one’s grandchildren. However, it should be borne in mind that where nature is replicated on a small scale, the plants are easy prey for pests. In addition, fertiliser must be regularly applied – the frequency and type of fertiliser depending on the type of tree and choice of substrate. Mineral fertiliser is therefore advised for substrates with a large proportion of peat, whereas the fertiliser should be rich in organic matter for mineral plant substrates. Bonsai experts are therefore keen to stress that there is no universal guideline for plant care.

The location, indoors or outdoors, has always been a matter of controversy. There is no doubt that conifer bonsais, for example, would feel at home outside exposed to the wind, rain and sun. Also, indoors, the bonsai pot needs sufficient light, although it should be remembered that tender leafy trees are inclined to shrivel quickly behind glass. Some argue of course that deadwood, which would have to be removed with the bonsai shears, also contributes to the detailed replication of natural features, since trees in the wild do not always grow straight.

Bonsais, which are fairly fashionable these days, can also of course be found in supermarkets. Many experts advise against buying one, despite the attractive price. Because often the pots are the wrong size, wires have grown into the twigs, and the earth and roots have dried out because no one really takes the time to water them properly. In addition, these plants, even if they are healthy and thriving, can never keep pace with the meticulously designed arrangements of horticultural specialists. So a bonsai that we want to stay with us for many years should be worth its purchase price. But simply buying the plant in the pot is not the end of it. Because pruning and shaping of the miniature tree take time and involve effort and expense. A bonsai should be kept in shape exclusively with bonsai shears and other special tools. There are leaf cutters for removing shoots and branch saws when twigs have grown thicker and stronger. The accessory trade also sells knives for scoring and peeling off the bark, along with shovels and rakes so that the bowl and the tree’s surroundings are always neatly kept. If a bonsai is ever transplanted into a larger dish, there are also special root hooks and pliers. 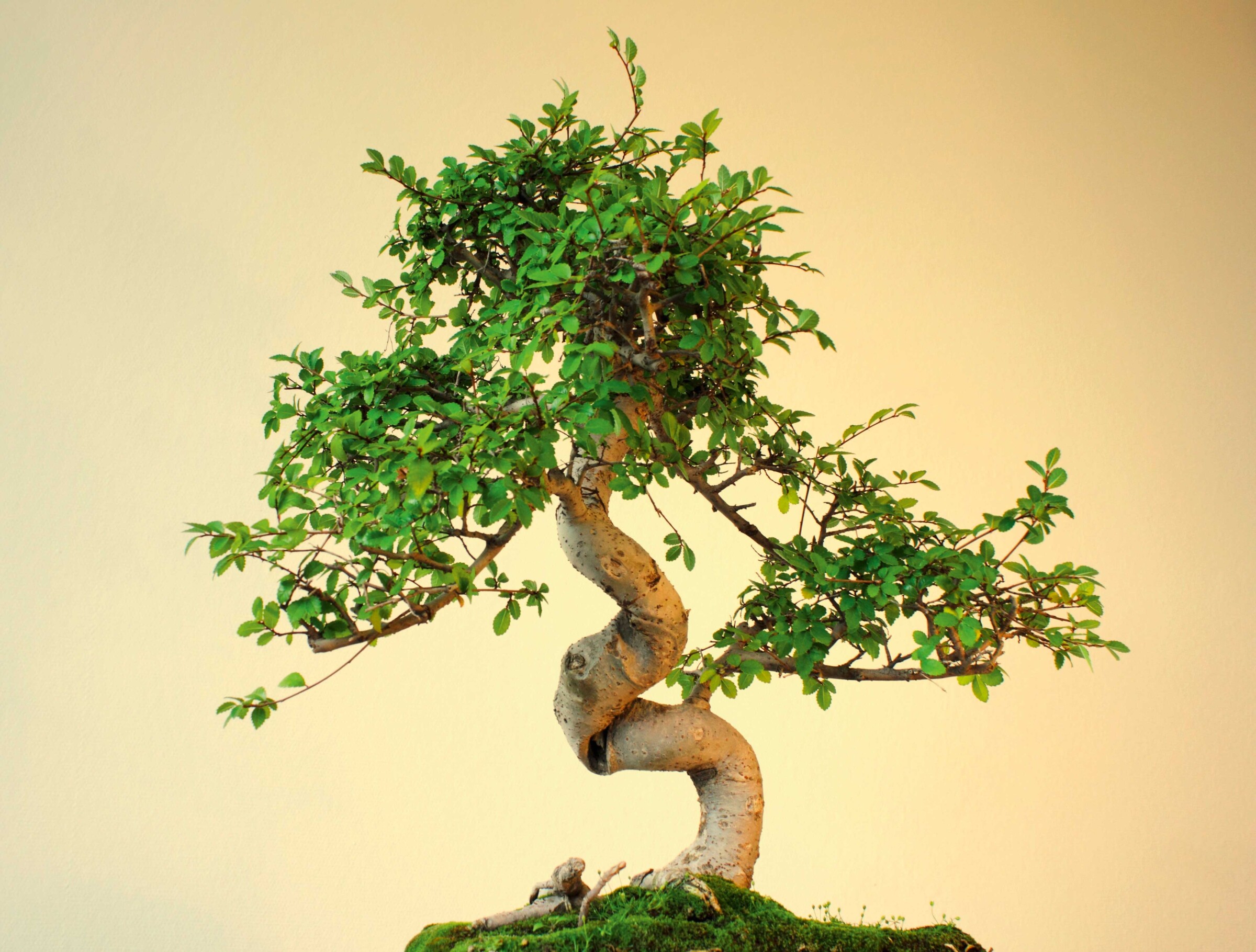 Getting the mini-tree to thrive and perfectly mimic its model in the wild is therefore a lot of work.