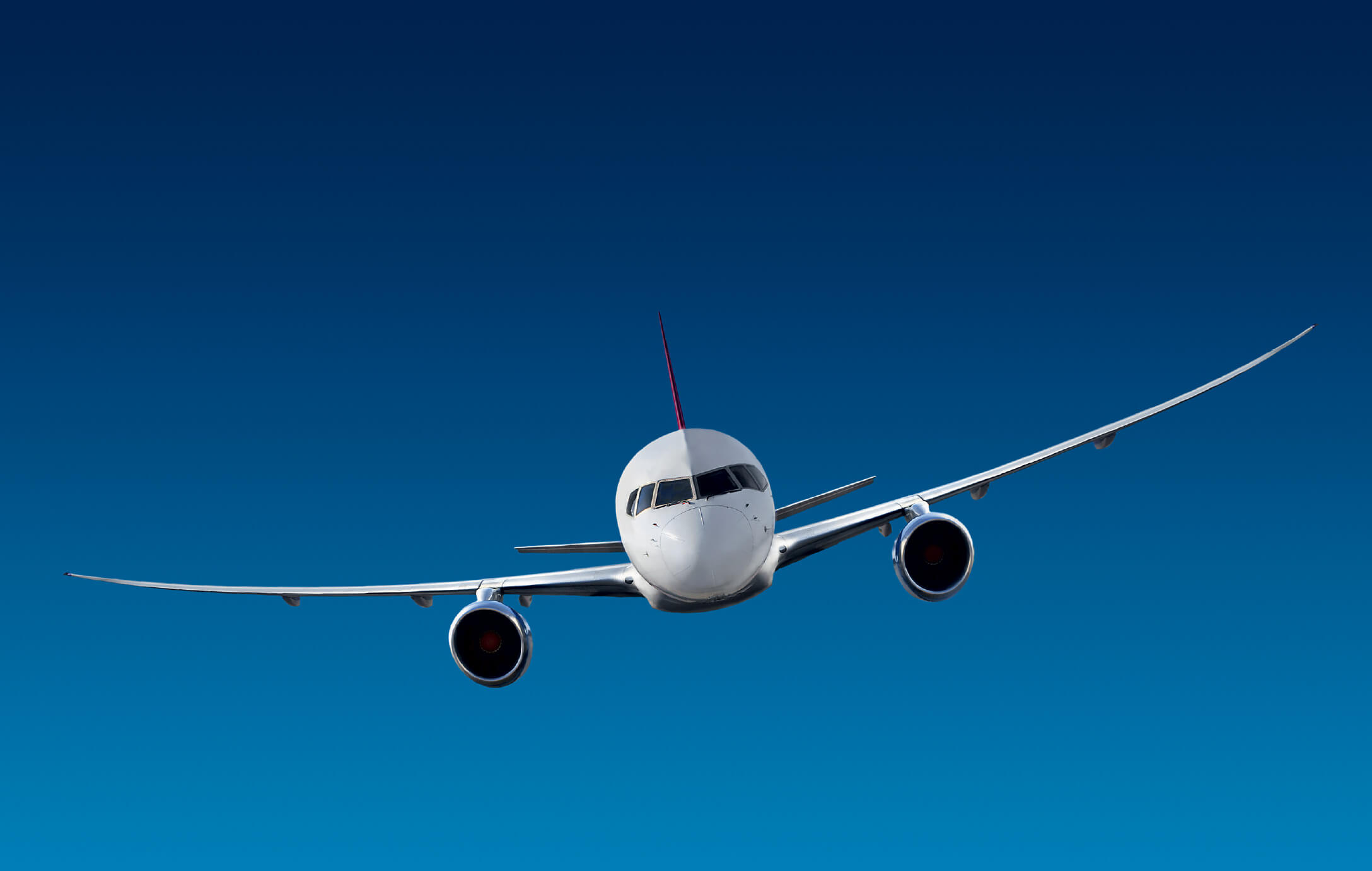 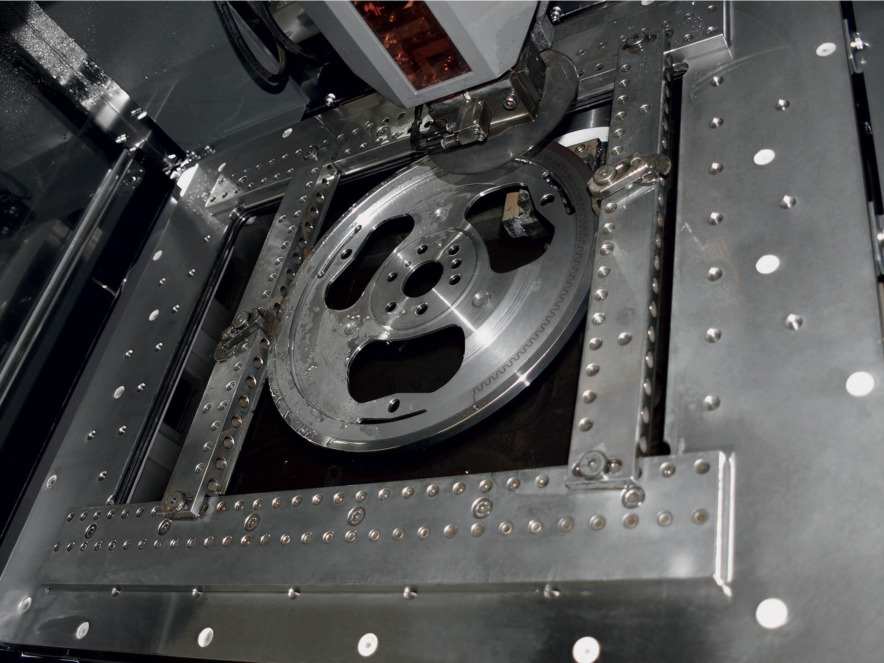 The FA20-S Advance at work on the external tooth profile of a motor racing flywheel.

Based on the Technology Park at the Silverstone Circuit in Northamptonshire, EDM Precision’s association with the motorsport sector is clear. Interestingly, after its recent move to a larger unit at the Technology Park, the company is now housed in the very facility where Eddie Jordan built his first Formula One car in 1990.

And yet while motorsport constitutes around 60 per cent of company revenue, EDM Precision is keen to build on its growing reputation in a number of other challenging sectors such as scientific equipment, medical, electronics, oil, defence and, importantly, aerospace. With regard to the latter, the company was accredited with EN /AS 9100, the aerospace quality management standard, as part of its commitment to continual improvement.

Established in 1992, EDM Precision was acquired by its present Managing Director, Paul Waldron in 2006. Mr Waldron has since introduced a number of changes that have pushed the company into the UK’s vanguard of EDM service providers. For instance, an ethos of job ownership has employees taking responsibility for planning and inspecting their work and not just setting and running machines, while another new initiative sees important events and projects handled using a four stage philosophy of think-decide-plan-implement, with particular emphasis on the “think” part of the process. Indeed, this very formula was applied to the process of selecting a new wire EDM machine.

“We wanted a machine that would give us the extra capacity to meet growing demand, which meant it needed to be capable of reliable, unattended, overnight operation. After careful consideration we opted for a Mitsubishi Electric FA20-S Advance. By selecting this machine we not only ensured the highest quality, but also the ability to start using the machine on day one due to the similarities with the seven other Mitsubishi Electric machines already on site.”

EDM Precision enjoyed a strong 2010 with demand increasing across the board. For instance, a total of seven Formula One teams carried parts made by the company during the 2010 racing season, while other motorsport disciplines such as Le Mans, touring car and historic car racing also placed high demands on capacity. Furthermore, aerospace is becoming an increasing part of revenue generation. 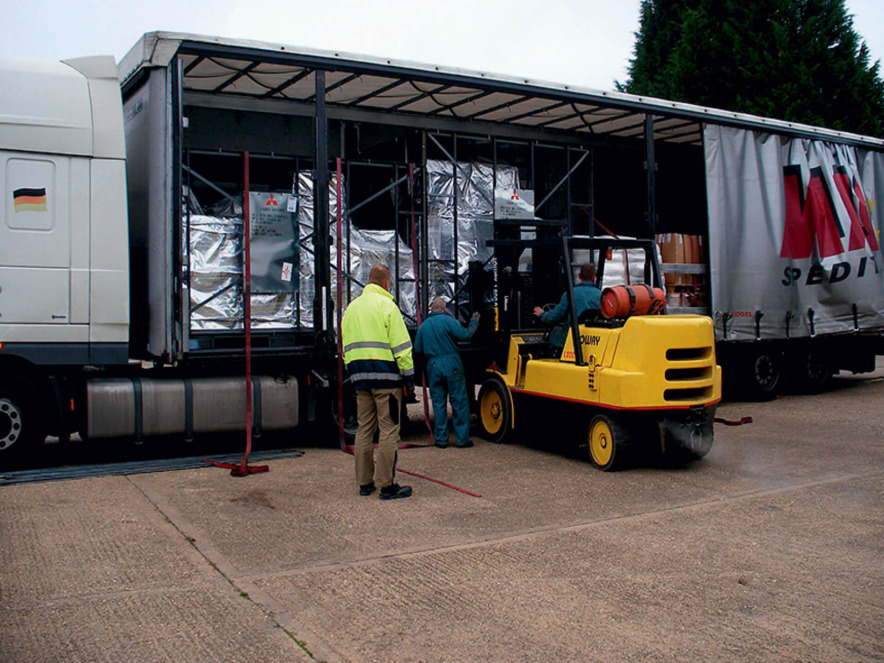 Delivery of the new FA20-S Advance. 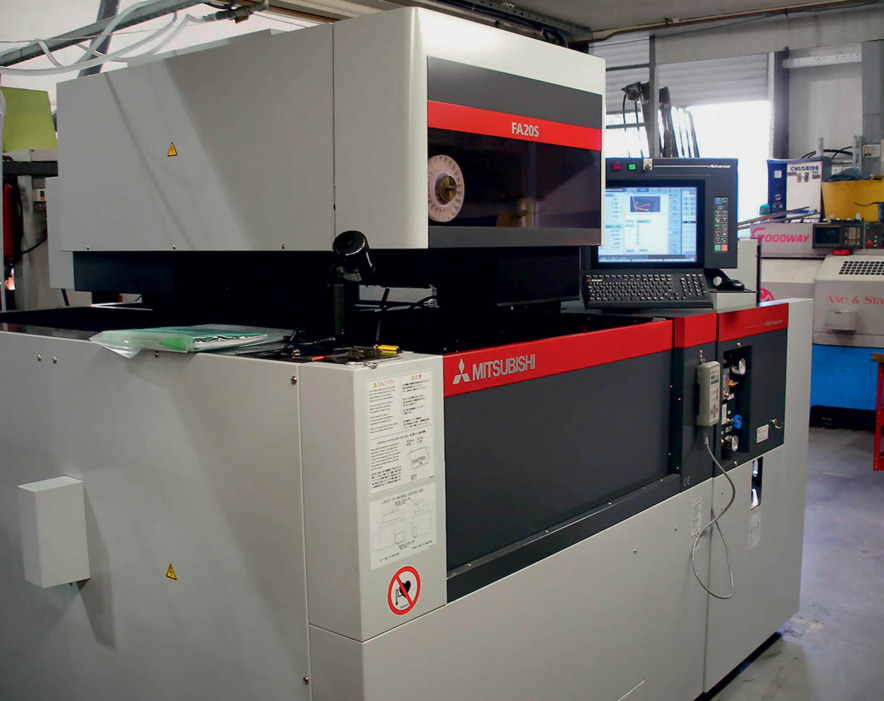 The FA20-S makes machining easier at twice the speed.

Maximum precision is the key

“Precision (for Formula One) and repeatability (for aerospace) are key factors if you want to win contracts in these sectors, which is where the FA20-S Advance comes into its own,” explains Mr Waldron.

Capable of handling workpieces up to 1050 x 800 x 295 mm, the FA20-S Advance
showcases Mitsubishi’s dedication to high precision. Wire EDM has never been so simple, particularly using functionality such as the M700 touch-screen control, anti-electrolysis technology and SL (Step-Less) control, all of which combine to make machining multiple parts with varying thicknesses and shapes faster and easier, saving up to 50 per cent machining time over previous models.

“There are many advantages to EDM, but typically our customers like the fact that no stress is induced into the part due to the absence of heat or friction generated by conventional cutting processes such as milling or grinding,” says Mr Waldron. “Additionally, because of the high cost of the materials used in many of the sectors we serve, customers appreciate that EDM can often yield a higher number of parts per billet.” 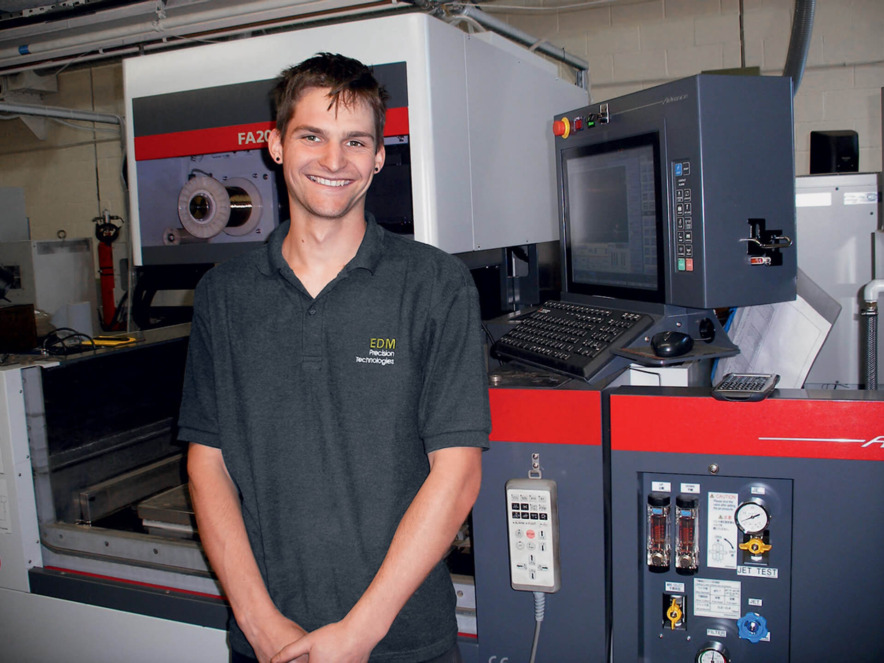 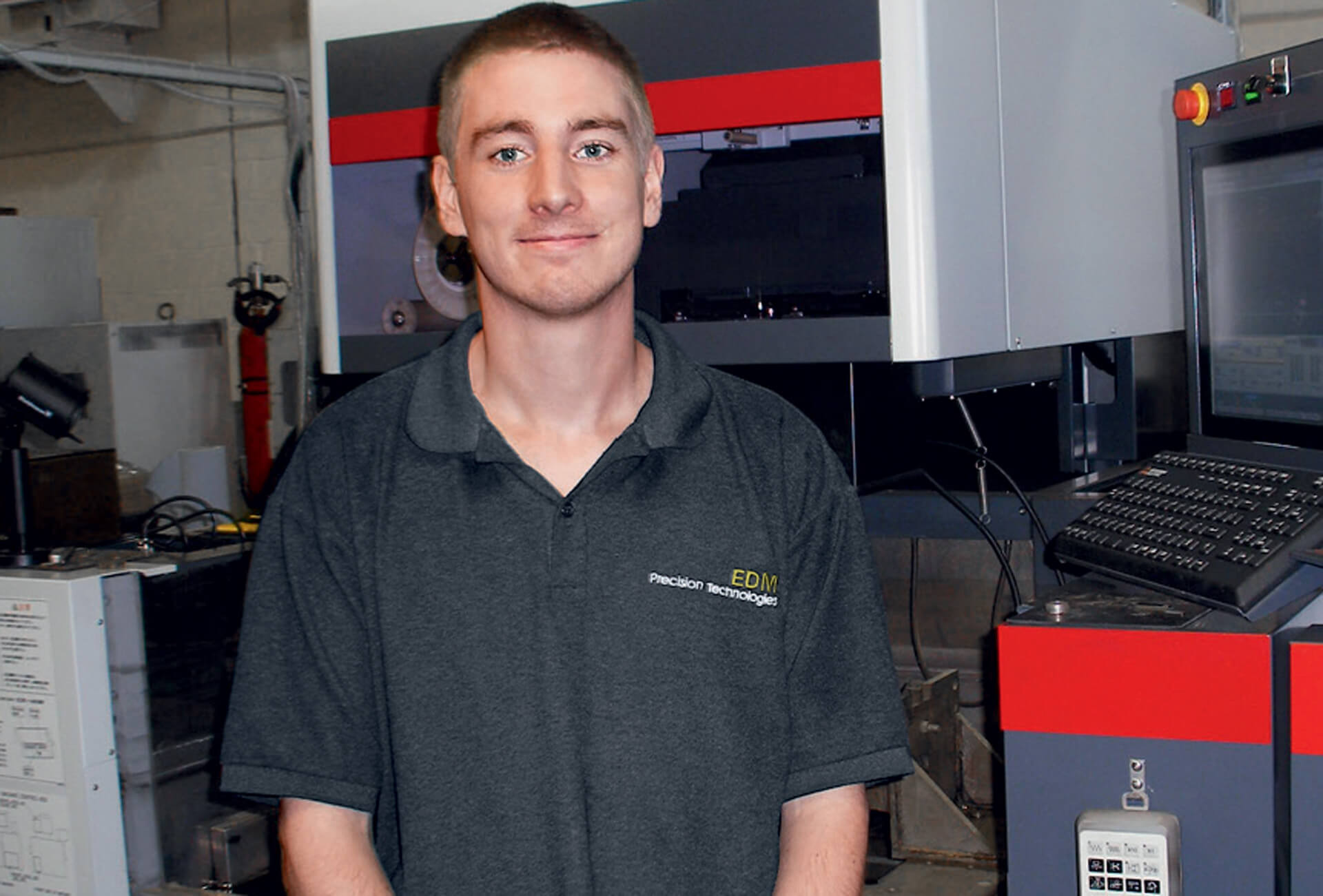 The staff of EDM Precision combine ingenuity and ­determination.

As a company, speed of response is another real strength of EDM Precision, this relates to both quote
turn around and production supported by its seven wire EDMs, three die sink EDMs, as well as CNC milling, CNC turning, EDM hole drilling and grinding capabilities. Additionally, smart engineering through the use of Erowa tooling systems enables work pieces to be transferred from EDM machine to mill, and vice versa, without the need for lengthy set-up procedures.

“In Formula One we might be tendering for a job at 2 pm with the order arriving at 4 pm and delivery required within a week – and we might have to source material in that time,” says Mr Waldron. “From time
to time we have orders with a next-day delivery required. Formula One is essentially product development at warp factor 10 on a race-by-race basis. Some of the components we are asked to produce are extremely challenging, but we have a growing reputation for using the determination and ingenuity of our experienced engineers to solve seemingly impossible problems.”

“The new Mitsubishi is a good investment for our business.”

In 2009, like many engineering companies, EDM Precision found the market tough-going. However, the business worked hard to make a modest profit and focussed its energies on emerging from the recession in a strong position. The company took on two trainees at the beginning of 2010, refreshed its website and pledged to begin searching for a new high precision wire EDM, a process that commenced at the MACH exhibition at the NEC in June 2010. With the FA20-S Advance now installed, this progressive strategy is already starting to pay dividends.

“We’re now seeing larger orders from existing customers plus a steady increase in new customers – in the past four months we have been adding new customers at the rate of two per month,” says Mr Waldron. “I feel we are well positioned to continue to grow with additional employees, extra capacity and continuous improvements in our processes and efficiency. The Mitsubishi FA20-S Advance plays a big part in this.”

The company’s Production Manager, Roy Marks, continues the theme: “Our Mitsubishi machines are
reliable, well made and accurate. With Mitsubishi­ you get extremely high quality – we have seven other Mitsubishi machines so our engineers are familiar with the controls. For maintenance, we can call out one engineer to service eight machines and with many of the wear parts and consumables being interchangeable, we can keep running costs under control. Last but not least, HK Technologies offer a full-time, dedicated applications engineer. He is an easy-to-access expert, and in addition to basic training he can add real value to a project by helping reduce machining time through his knowledge of the optimum machining settings to use for unusually shaped parts.” 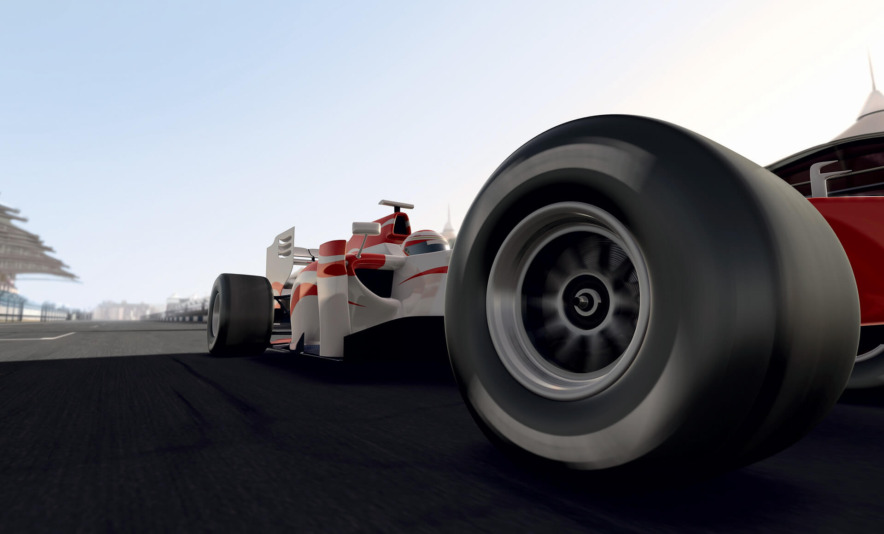 Total commitment for the end products of the FA20-S Advance.

Due to its speed, accuracy and cost efficiency, the FA20-S Advance is now first choice for all jobs at EDM Precision. Mr Waldron says he is expecting 10–15 years’ peak operating life from the machine, which will be “many years after it has paid for itself”.

Batch sizes at the company range from 1-off to over 100 in some instances, although 20–25 is typical. At the time of writing, the machine was loaded with a flywheel for a motorsport customer that required the external tooth profile machined.

In terms of accuracy, Mr Waldron says the machine is easily good to ± 5 µm, often ± 2 µm, although he states this is usually only in cases where EDM Precision is creating the datum. If the component is already part-machined by another company, the subsequent EDM work will only be as accurate as the datum created.

As a point of note, the company also manufactures a small selection of its own products. A recent example is a titanium brake shim that reduces heat transfer from the brakes to the brake fluid. This effect can be disastrous in motor racing as heated brake fluid with compressible gas bubbles can suddenly reduce the effectiveness of braking.

A Mecca for F1 engineers

Such is the growing reputation of EDM Precision that the company even hosts tours of its facilities­ for technical colleges and universities. In fact, the company recently hosted 25 design engineers from a Formula One team, who were keen to find out more about EDM and design-for-manufacturing. The knock-on benefit for EDM Precision is the arrival of designs that are more conducive to EDM processes, as well as new parts that were previously manufactured using other techniques. Of course, taking centre stage for the tours is the company’s new Mitsubishi FA20-S Advance. “There is no escaping the fact that acquiring new plant and equipment represents a big commitment for small businesses, but to not invest is simply not an option,” concludes Mr Waldron. “Running any company is about making the right decisions at the right time. Taking a long term view in a small business can be challenging, as it’s easy to get overloaded with day-to-day work. However, if a small company is going to benefit from its particular mix of quality, service and value by using its own expertise, speed and agility, then time must be set the aside to make longer term plans. There is no doubt in my mind – the Mitsubishi is a good investment for our business.”