When accuracy, durability and user-friendliness are demanded from EDM machines, numerous companies turn to Mitsubishi Electric in the certainty of obtaining heavy-duty and reliable machines. 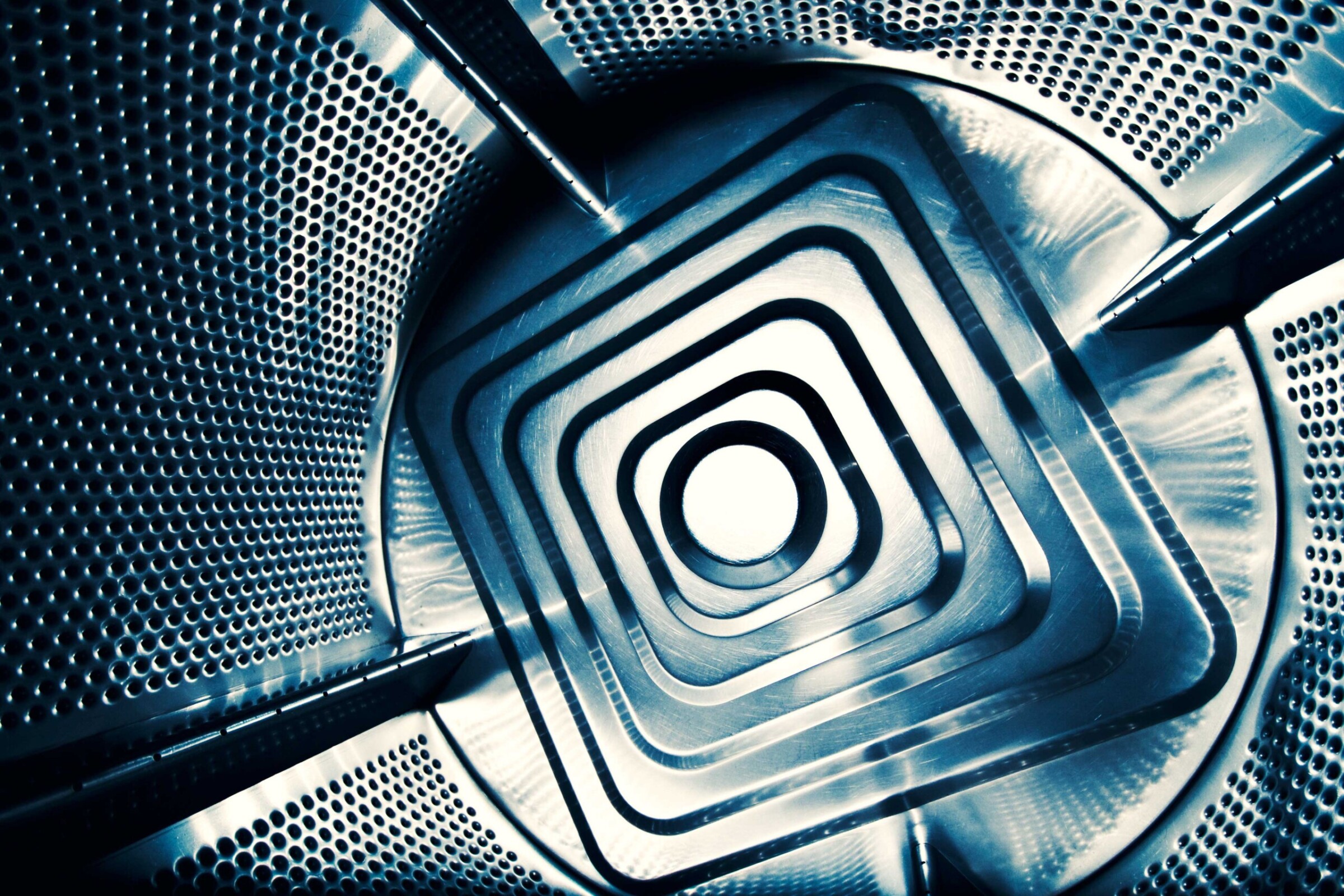 When accuracy, durability and user-friendliness are demanded from EDM machines, numerous companies turn to Mitsubishi Electric in the certainty of obtaining heavy-duty and reliable machines.

SAL S.r.l. is a company in Besozzo, Italy that produces sheet metal parts for various branches of industry and particularly for the household appliances and automotive industries as well as for electronic equipment, electric motors and furniture components. The company has its own production department containing numerous presses and a shop in which moulds and tools are fabricated. SAL went into business in 1960, the year in which Italy achieved the highest GDP in its history, as SAL itself notes. Household appliances made in Italy were at the time the best-known and biggest-selling in Europe, and elsewhere. Today the situation is entirely different and production has been relocated to countries like Poland, Romania, Turkey and Russia. And it is precisely for these countries that the moulds developed and produced by SAL are destined. Exports account for over 80 % of sales.

Washing machine doors and drums, coupling hooks, engine covers, stamped circuit boards, belt springs and seatbelt height adjusters, connectors, seat components (guide rails, backrests and seats): these are just some of the SAL’s many products. The degree of difficulty involved in their production is moderate to extreme. The company strategy not only focuses on the supply of basic processes where the international competition is at its strongest, but also includes ser­vices with high value added because these are capable of giving its customers a competitive edge.

The Italian company also much appreciates the ­super-finish function that ensures a surface roughness Ra of 0.1.

Davide Paolillo, Managing Director of the company in Lombardy, explains: “We’re direct suppliers to almost all household appliance manufacturers and component suppliers to the automotive industry. To extend our offering, we have restructured the company over the years. We first established our own internal department for the development and production of the various moulds and tools that are necessary for producing, in cooperation with the customer, finished products and not just simple, stamped parts. After this, we sought cooperation with a specialist in the automation and robotics sector. This means that we can now offer sheet metal products as well as the tools required for this and even the automation of an entire production line. Or all three services combined. We are on the lookout for customers abroad, since little work is generated at home in Italy – the country is not currently attractive for investors. At any rate, in all these years, except business year 2013, we have recorded in some cases strong growth in sales.”

To stay buoyant in an increasingly competitive market environment that almost paradoxically seeks the best quality and the lowest price, it is absolutely essential to respond attentively to customer needs. The quality management system of the Lombardian company thus extends to all departments – but not only to these. For external suppliers are also called upon to act consistently in accordance with this outstanding quality standard. “This is the only way we can master challenges at the highest international level. It is our claim to be a genuine, reliable partner that makes its often decisive expertise available to the customer for the development and refinement of its products. Our research covers everything from design to the creation of technology, project and process solutions. Our customers increasingly request the planning of all the required plant, which often encompasses entire production lines. We sometimes set up such a production line on our own site so that production can start without delay before the plant can be installed on the customer’s premises.”

Start to finish on a single production line

SAL’s speciality is the development of follow-on composite tools. To optimise the production pro­cess, make better use of resources and technologies, simplify toolmaking and of course cut costs, the company has recently been targeting solutions that automate production as far as possible and eliminate the need for further production steps on other machines. This is the reason why follow-on composite tools are on the advance – complete systems with slides, ejectors and many other jigs and fixtures. The process starts with conventional stamping with follow-on composite tools, by means of which the sheet metal, without leaving the conveyor belt, is machined at a series of stations. Only the final machining stage, such as edging, perforating, beading etc., on the individual item takes place on transfer lines. The company wants to specialise further in order to integrate this final step as well, creating a complete system in which a coil is fed in at one end and the finished product comes out the other. Automation can often include packaging. In such cases, the operator only has to monitor loading and unloading as well as the trouble-free operation of the machines that run continuously – during the day, at night, at weekends and on public holidays. 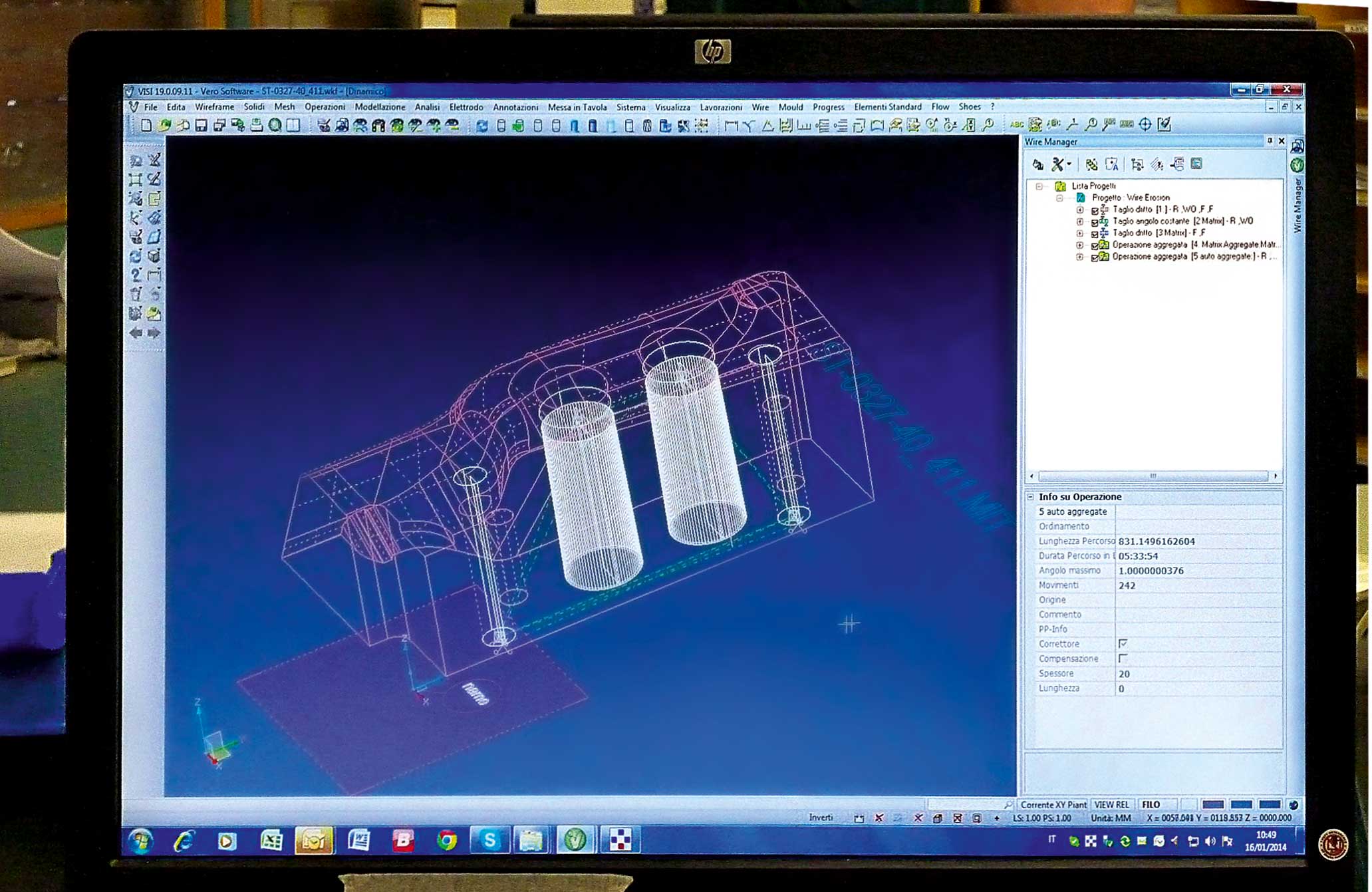 The increase in ­productivity is truly ­remarkable.

The SAL workshop is equipped with an abundance of machine tools of all kinds. One of the most frequently employed technologies is wire-cut EDM with which the various parts of the rams and bolster plates are produced. The company in Lombardy chose Mitsubishi Electric as its supplier for this technology many years back. “We selected this manufacturer and Overmach, its agent for service and sales in Italy, because the tests that we have carried out with them over the years have all been successful – without exception. Time has shown that our loyalty was well placed because we’ve never had any problems whatever with this partnership. True to our principle of always using the latest state of technology, we recently installed the latest MV2400R model – a very heavy-duty, high-performance and flexible machine that is ideal for the machining of a huge range of parts. Yet again, all of the machine’s pledged properties have been confirmed in our daily work.”

EDM at its finest

The busy North Italian company benefits enormously from the automatic wire threader. Although the older-generation machines also had this function, it has been perfected on the MV2400R to such an extent that wire threading is now possible in the full dielectric tank. For SAL this means big savings of time. For the production of such components as washing machine drums, a large number of holes have to be cut. Thanks to wire threading in the full tank, one hole after the other can now be cut unmanned without the tank having to be emptied and refilled every time. “It’s only a few minutes of saved time in each case, but they soon add up to hours. The increase in productivity is truly remarkable. This feature is something we really can’t do without any more.” 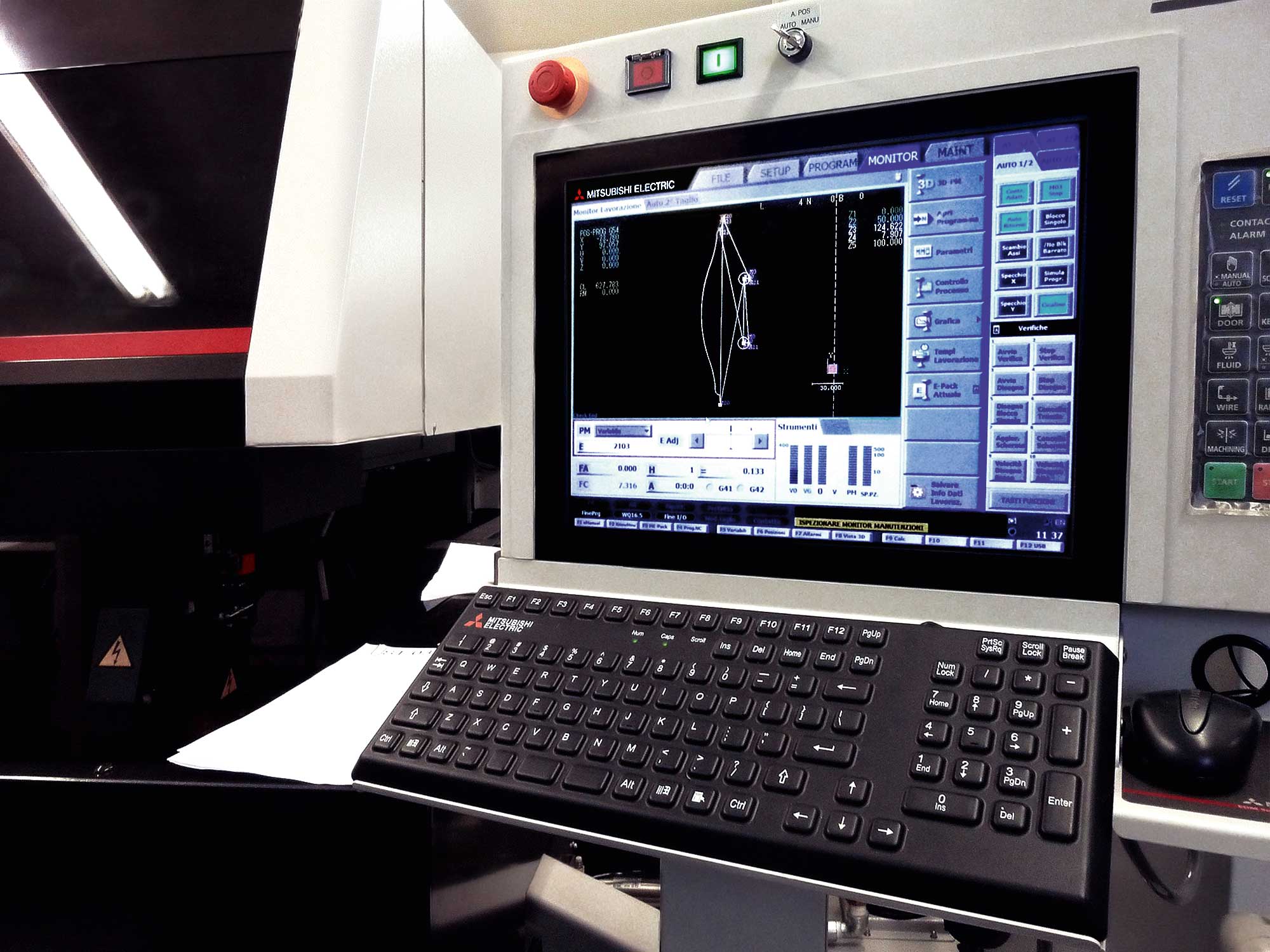 The MV2400R from Mitsubishi Electric in action

At a given speed, the machine also shows much improved precision compared to the previous version. The Italian company also much appreciates the super-finish function that ensures a surface roughness Ra of 0.1. The more precise and smoother the cut profile, the longer the tool’s ser­vice life in the press. The lower the angular and surface accuracy, the blunter the edge (lack of sharp angles). This outstanding surface finish has been achieved thanks to better control of constant electrical discharge.

The new MV2400R also features a number of further technological characteristics. The housing made of Meehanite cast iron ensures a long ser­vice life and unchanging precision even on heavy workpieces. The stainless steel tank displays superlative resistance to di­electric- and sludge-induced degradation. The linear technology makes use of the tubular shaft motors in which a high-performance, 360° magnetic field reduces energy consumption while the special configuration permits precise axis movements without backlash. The non-contact force transmission facilitates stable and accurate axis movements. The motors are situated precisely in the centre of the moving weight, thus permitting extra-smooth axis movement, while the position of the optoelectronic linear scale close to the work space ensures precision in all operating states. 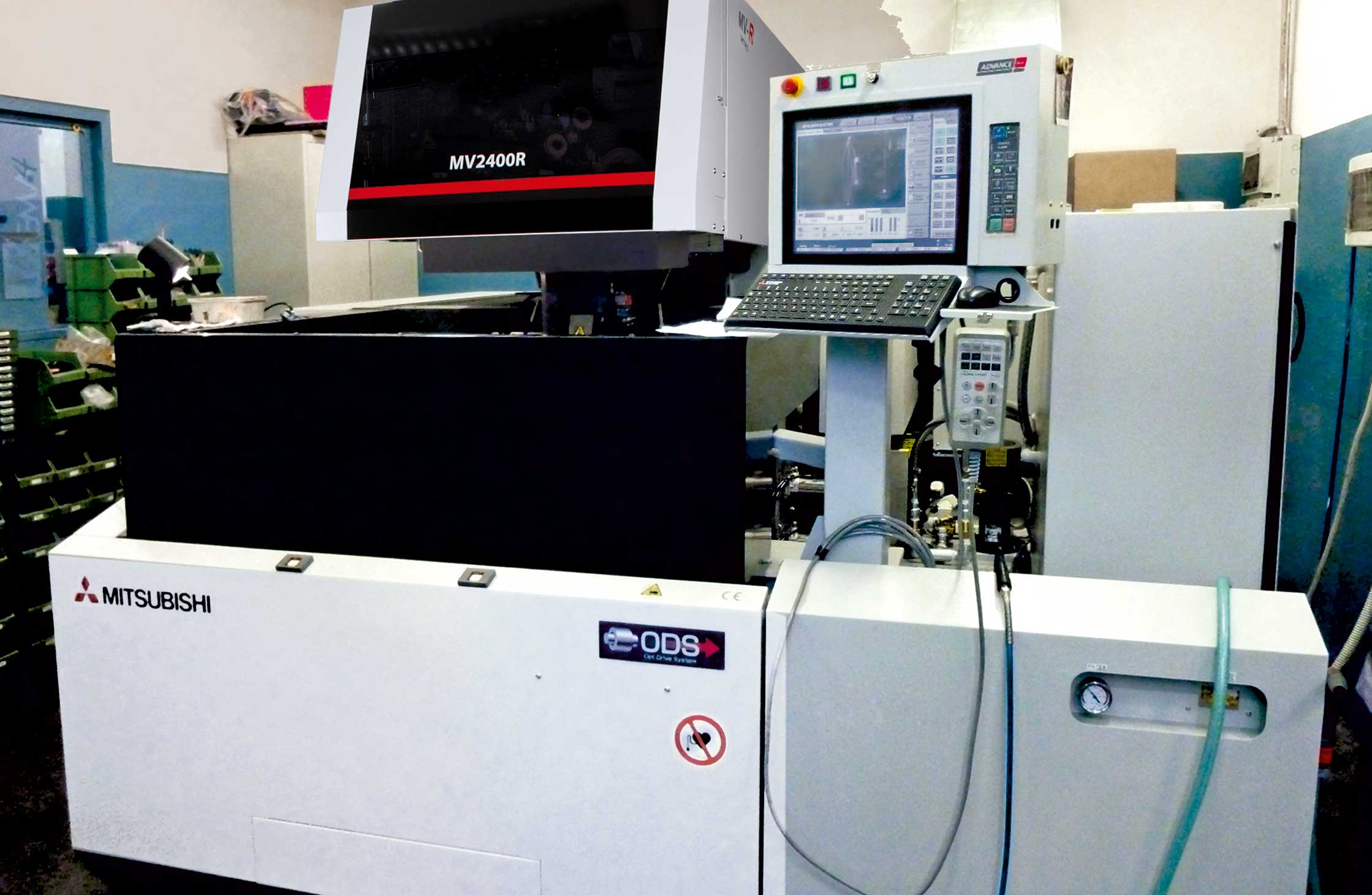 The machine control is entirely digital. The Optical Drive System (ODS) uses optical waveguides for communication between the control unit, servo booster and motors for even higher precision. In short, this means higher productivity with the simplest handling. All of the features combined contribute positively to energy savings and reductions in running costs. The running costs are much lower than those of conventional machines, from the electricity bill and wire consumption to – thanks to the automatic control of filtration – filter consumption.

Davide Paolillo sums up: “We’ve benefited from the innovations, which was why we bought the new machine. The other wire cutting machine from Mitsubishi Electric in our shop is the FA20S Advance that still performs flawlessly and is still highly efficient. We rarely have a need for die sinking. But in these cases as well, which call for precision and reliability, we trust in Mitsubishi Electric because our preferred supplier stocks machines from the Japanese manufacturer – even if it is not just around the corner.” 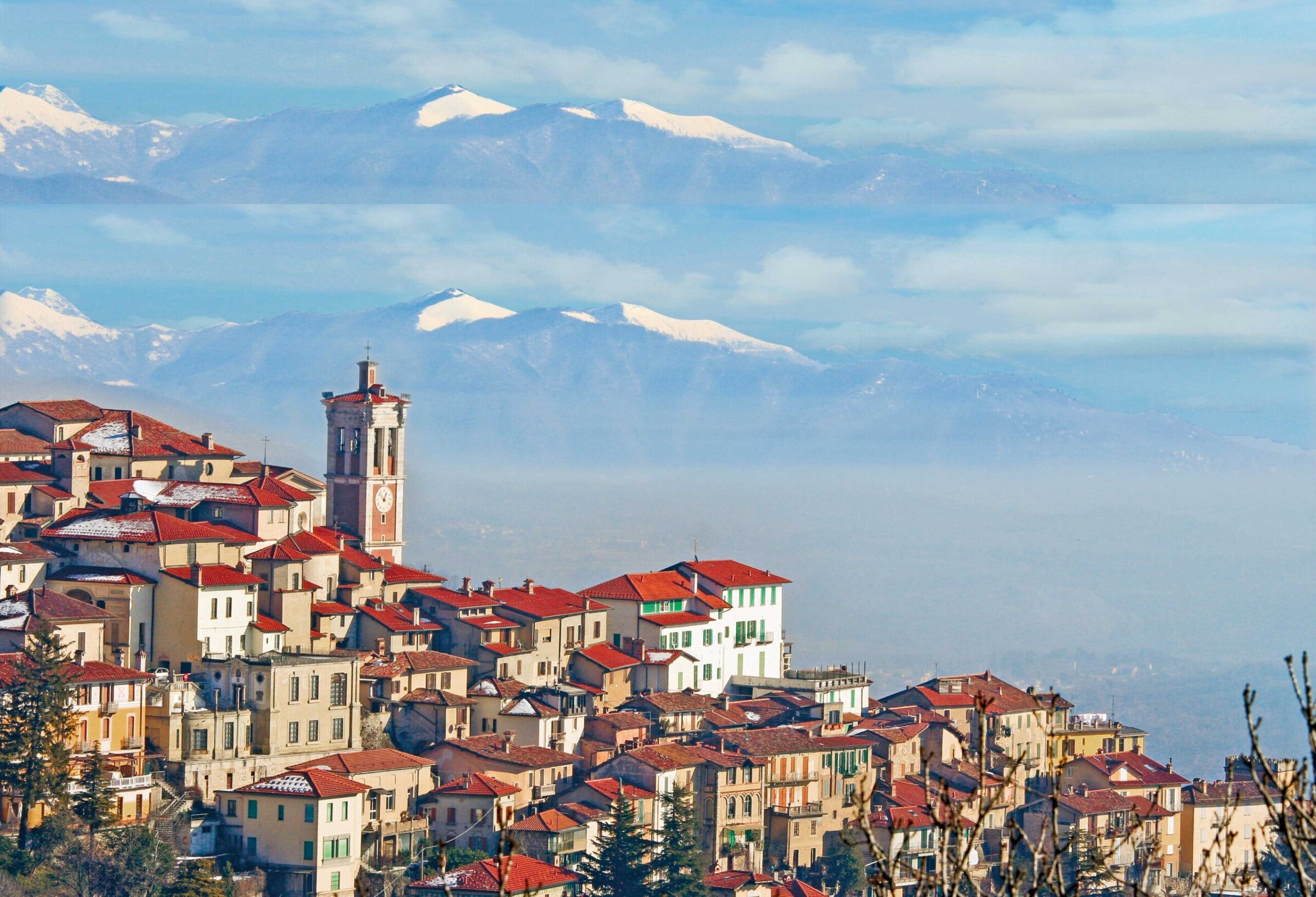 The province of Varese in Lombardy, Northern Italy

There are also no complaints with the technical service from Overmach. “Most of the assignments were for other equipment. We’ve never had any problems with the wire cutting machines. Nevertheless, we’ve found the customer service to be excellent. We believe Overmach is one of the best providers of machines and service in machine manufacture.”

SAL also designs and produces finished products like mini-ovens and pasta cookers. In addition, the company has developed, marketed and patented an invention of its own called Ecodiger. This appliance is used for the disposal of residual waste (inclusive of biodegradable substances) in large undertakings (canteens, hospitals, restaurants etc.). It works on the electromechanical principle: “We developed the entire process ourselves, drawing our inspiration from nature but accelerating the process enormously mechanically and chemically (patented process). The compost resembling coffee grounds takes just a few hours compared to the several months in nature.” 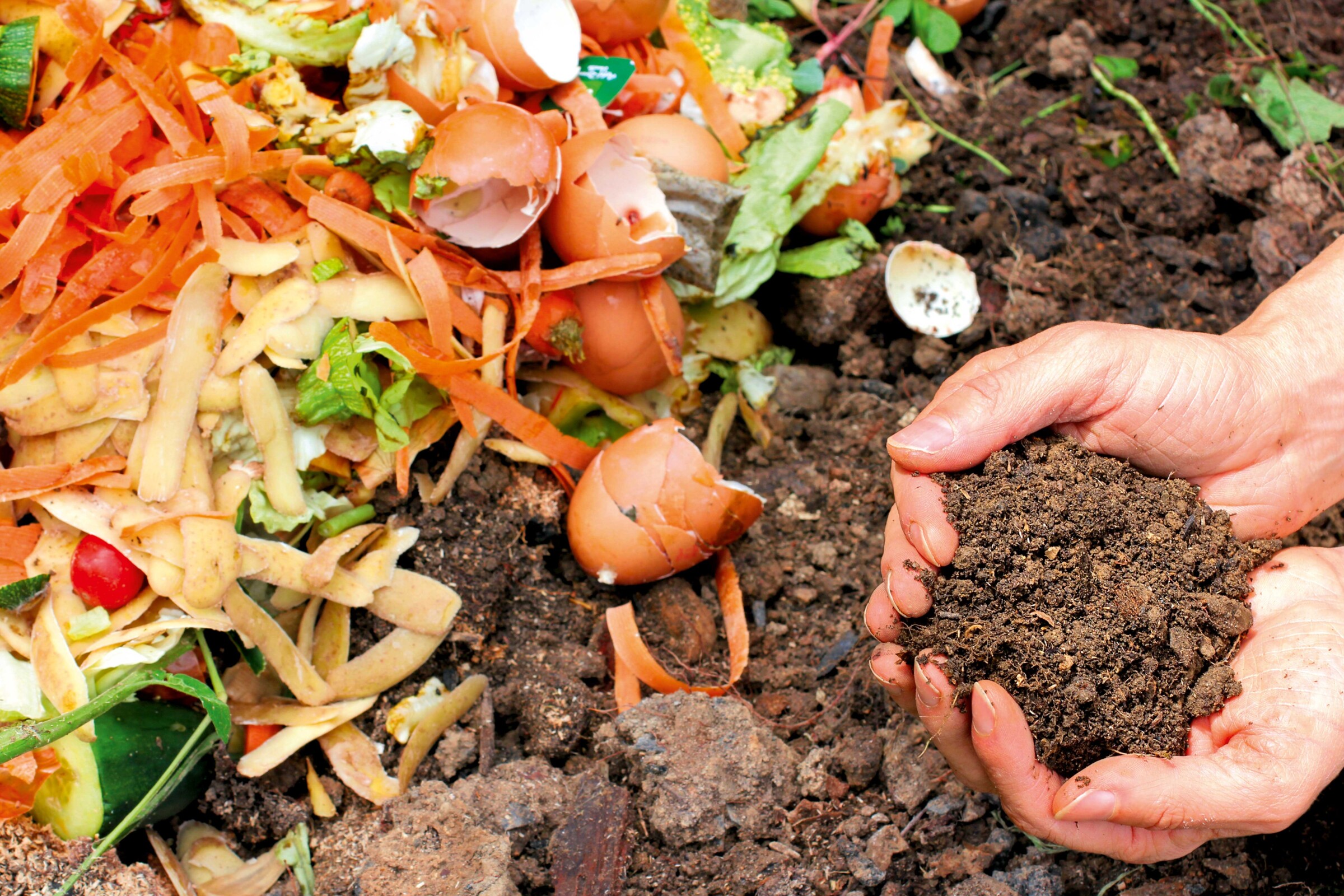 SAL developed and produced this appliance without any outside support. “Many other countries would have funded such a project. Even the United States would have supported it because it qualifies as an ecological and innovative project. In Italy, on the other hand, there was not yet any appreciation of the project’s importance.”