In the heart of an essentially agricultural and touristic area, Celoplás in the north of Portugal produces high-precision plastic parts by injection moulding for the international automotive industry, electronics industry, medical technology and the domestic appliance industry. The owner and Managing Director João Cortez sees his concentration on cutting-edge technology as the key to his success.

In the heart of an essentially agricultural and touristic area, Celoplás in the north of Portugal produces high-precision plastic parts by injection moulding for the international automotive industry, electronics industry, medical technology and the domestic appliance industry. The owner and Managing Director João Cortez sees his concentration on cutting-edge technology as the key to his success. And this explains why he has nothing but wire-cutting and die-sinking EDM systems from Mitsubishi Electric in his toolshop.

We encounter plastic parts manufactured at Celoplás in Portugal on an almost daily basis. Such parts ­include the keys and buttons found in cars and on our household appliances. When we switch on the air ­conditioning system or the light in our cars or select a wash programme on our washing machine or ­automatic dishwasher, we often do so with a component from ­Grimancelos in Portugal. In spacious production shops, several million high-grade plastic parts are produced there each year on dozens of injection moulding machines. Usually these are intricate subassemblies comprising several different components. Made of flexible, elastic or rigid, single- or multi-coloured plastics, the company produces sophisticated, ready-to-install ­components in a process lasting just a few seconds. In a similar fashion, the Portuguese specialists also ­produce plastic parts in which metal ­elements are already ­integrated in the injection mould. These can be heavy-duty and durable plug ­connectors for the electronics and electrics in motor vehicles. The company supplies such high-grade plastic parts to virtually all European and even to Japanese automotive and appliance manufacturers. On the reasons for this international success, one of the founders and ­owners Cortez explains: “From the outset it was my endeavour to make the company as innovative as possible. In the tough environment of international competition, we have managed to hold our position solely on the strength of our outstanding technology and quality.” 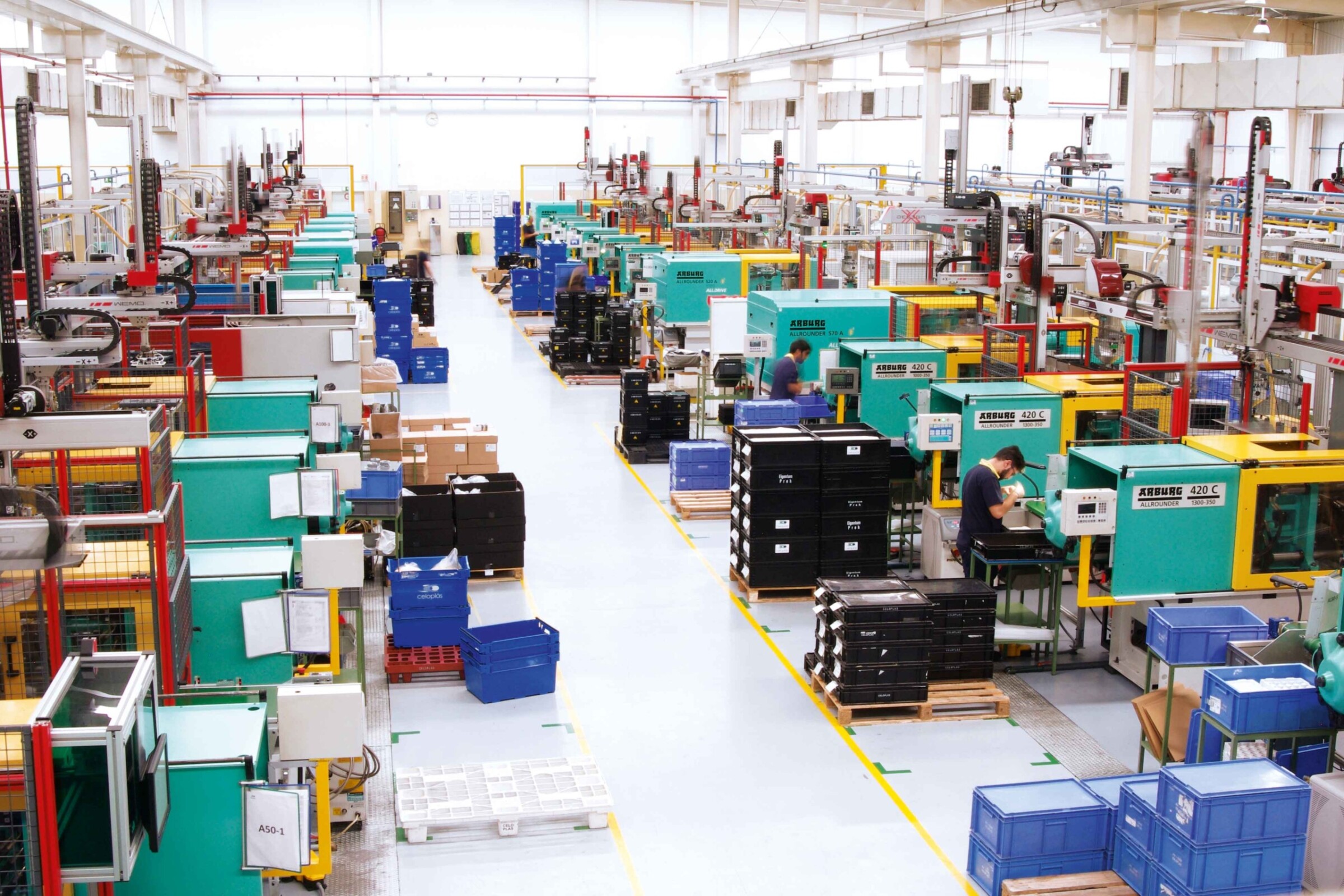 Before setting up his own business, Cortez worked as a plastics technician in an injection moulding shop. This is where he soon identified the potential to be found in plastic as a versatile material suitable for many different applications. He wanted to make ­better use of the possibilities of this material. At the same time, he saw in the development of forward-looking technologies a big ­opportunity for boosting the economy of his home region and of Portugal as a whole and making it competitive on the international level. 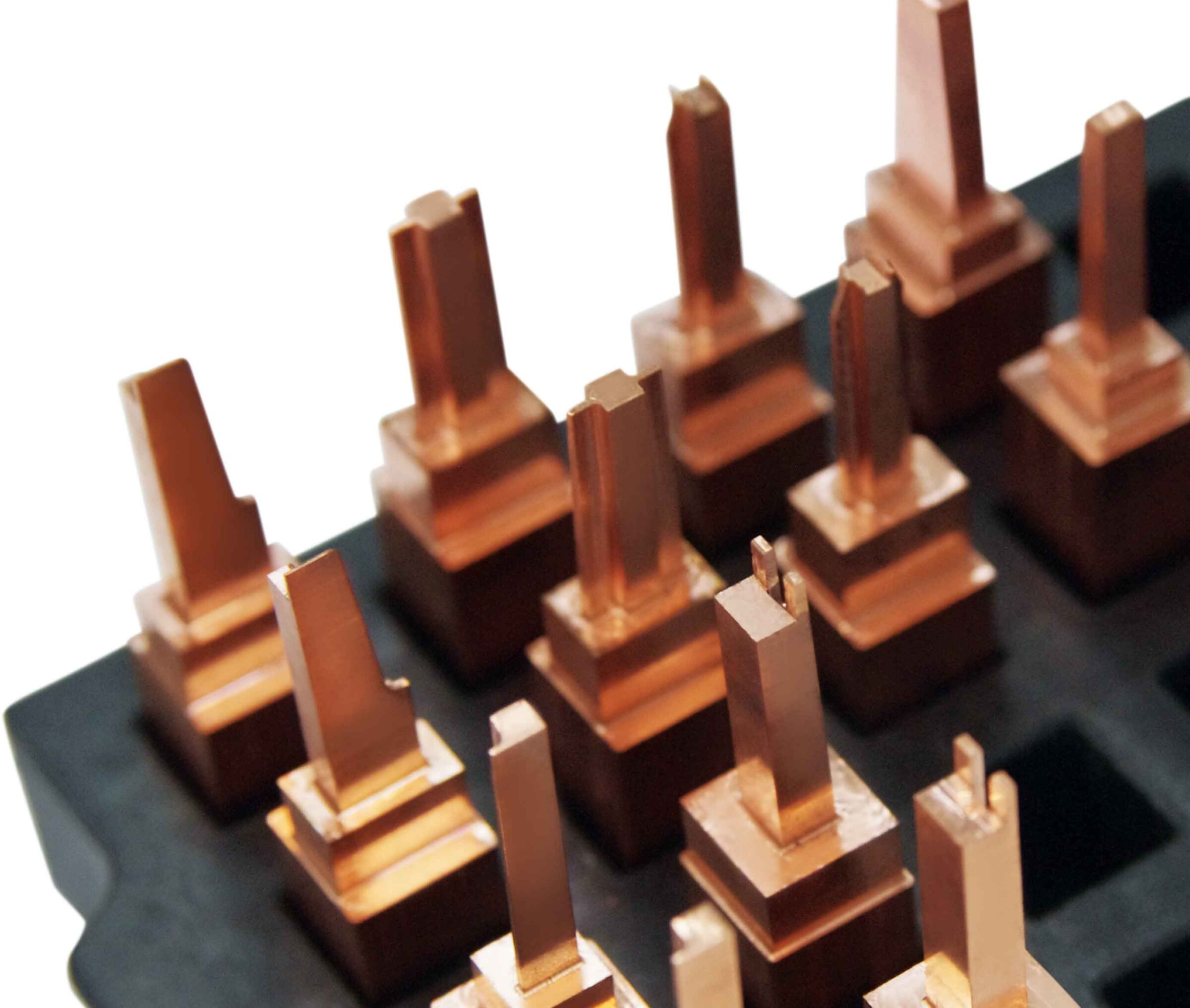 Since the company’s establishment in 1989, Mr Cortez has concerned himself with all the technologies required for the production of quality plastic parts. These include not only injection moulding machines, but also, and above all, injection moulds. Cortez has run his own tool-making department from the beginning. He is convinced that top quality is only possible if his company fully masters all the production steps from the design of the plastic parts and the injection moulds, the making of the moulds and the operation of the injection moulding machines through to the 100 per cent quality assurance demanded today. He also sees innovation as another decisive factor for competitive companies and products. He has been constantly interested in new technologies. If they fit in and look worthwhile, he integrates them in his company’s portfolio. Several experts at Celoplás are meanwhile working on the fabrication of extra-small injection mouldings with edge lengths and diameters <1 mm. For this they have a dedicated laboratory containing machines for the production of micro parts for moulds. They also work with micro injection moulding machines on which they have already successfully injection-moulded the tiniest components for medical and electronic technology, some of which in turn consist of several parts. 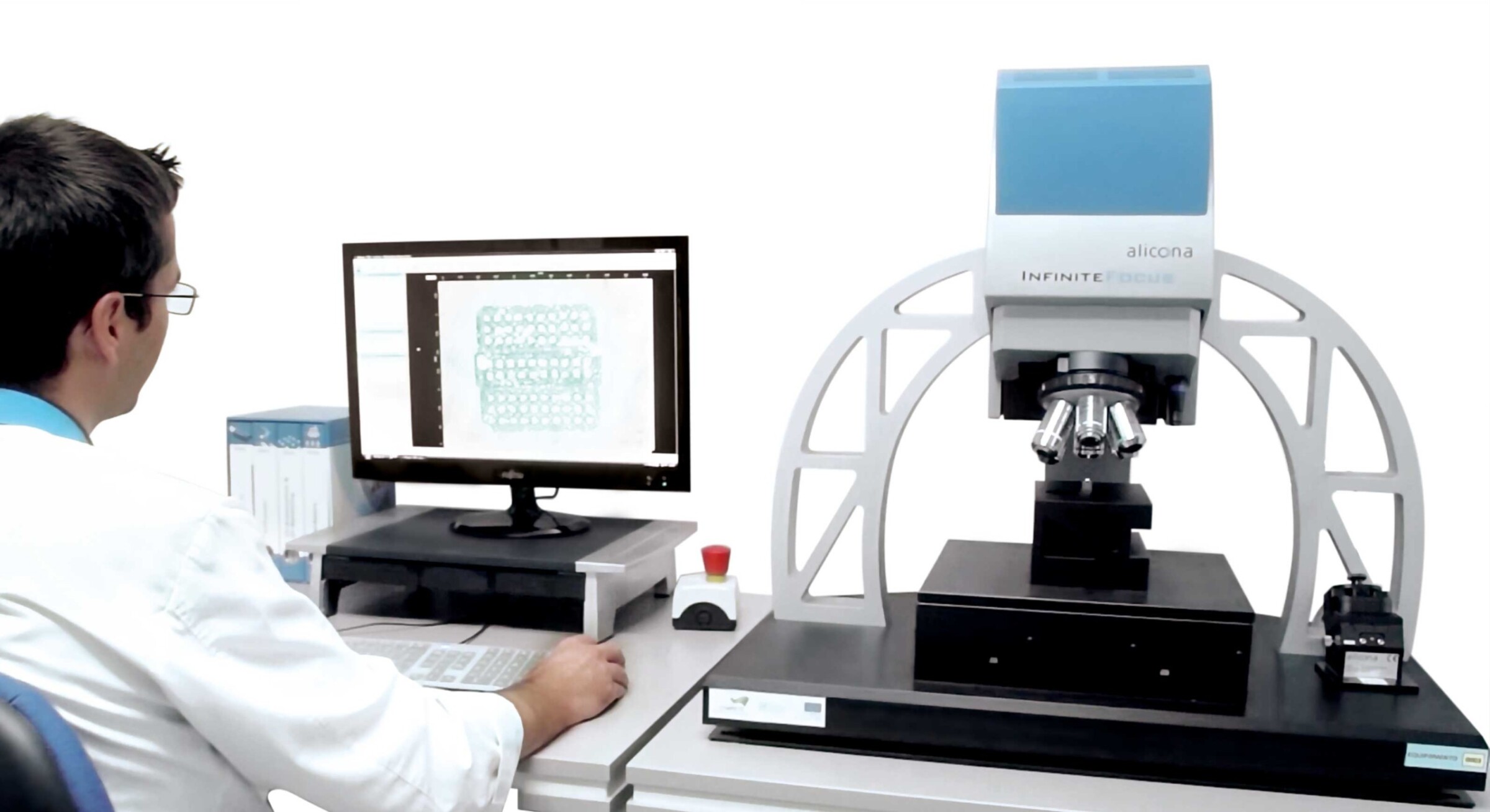 EDM – a technology of the future.

In its series production activities, the company mainly produces small plastic gearwheels, which are used in measurement and control instruments as well as in clock movements. Using the over-moulding process Celoplás also produces metal-plastic components for the automotive industry in large series. These can be plug connectors with up to a hundred integrally moulded pins and a housing that seals watertight. For this the injection moulding machines run 24 hours a day, 7 days a week, processing PEEK, PES, LCP, PA, PBT, PC and ABS, among other things. Celoplás supplies more than 200 million injection-moulded components per year worldwide. 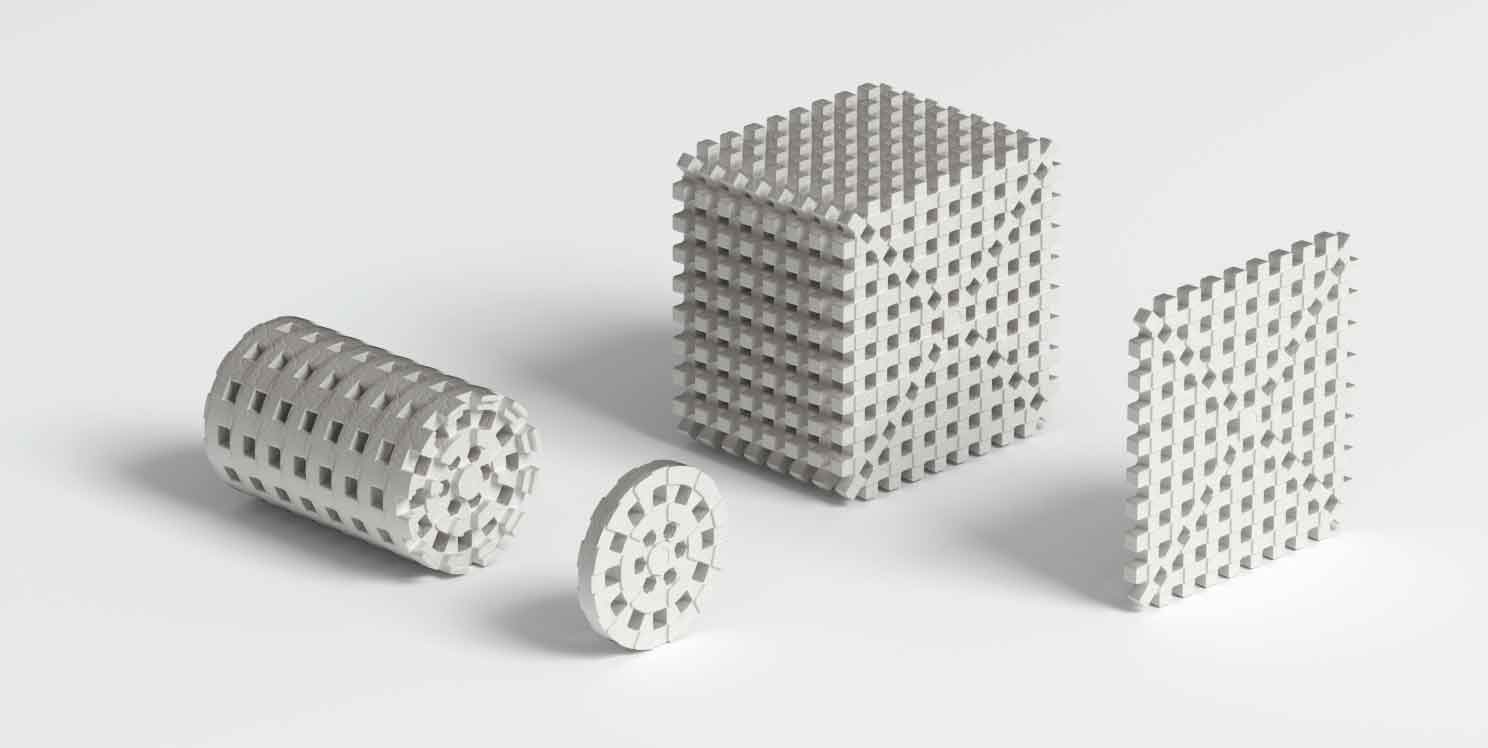 EDM – a technology of the future

High-accuracy moulds as the key to success Mr Cortez regards tool- and mould-making as the key technology for successful injection moulders, which is why he has consistently built up this activity since founding the company. Up until almost 30 years ago, he reports, Portugal imported all its tools and moulds, with the country’s firms serving merely as inexpensive ­injection moulders. At the time, Cortez was one of the first within Portugal to develop the necessary expertise and successfully establish tool- and mould-making. 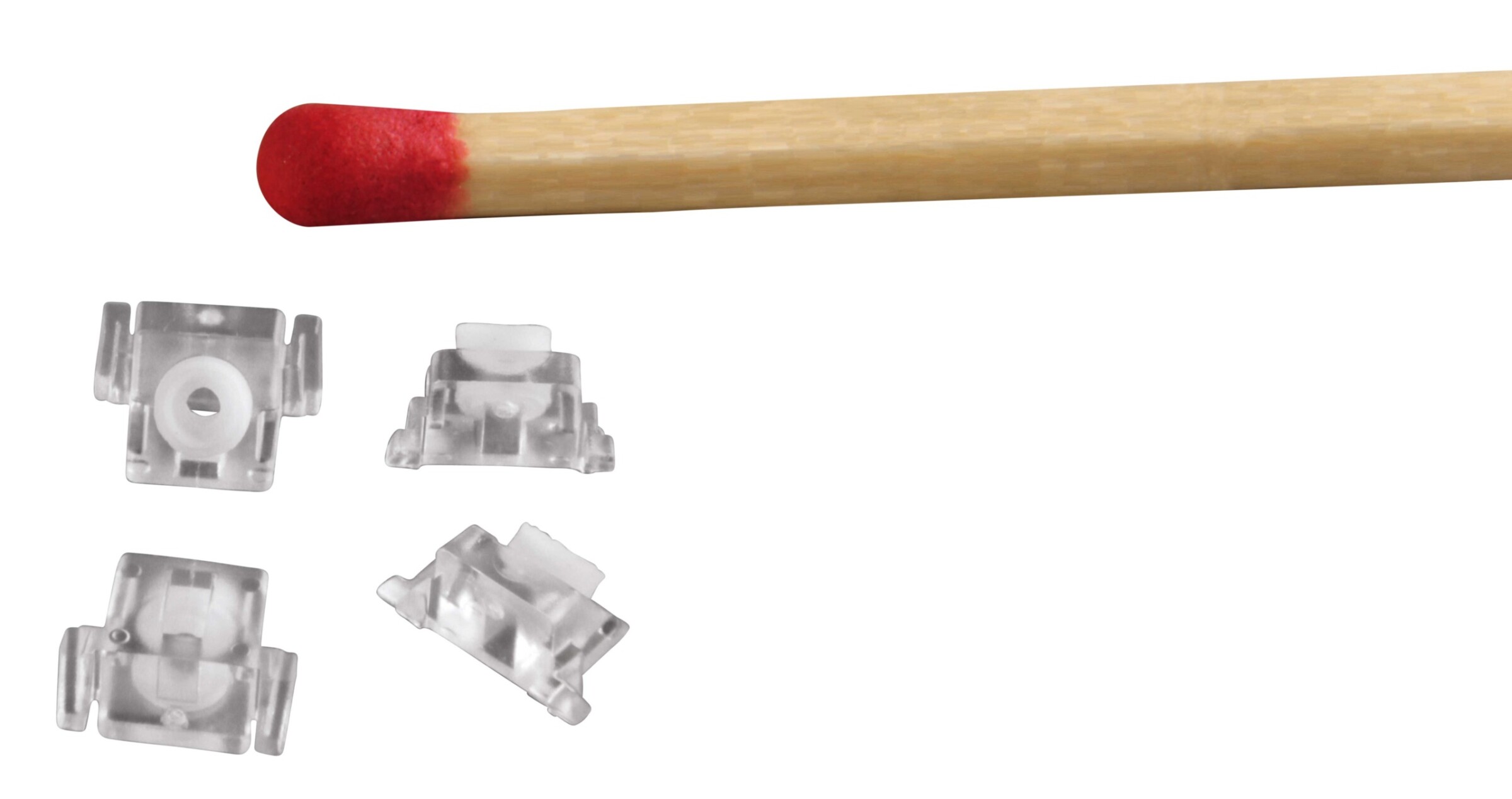 From the outset, he has always invested in the best-possible equipment and machinery for mould-making, just as for all other areas of his business. Work of superlative quality is only possible with high-grade equipment, he stresses. At the same time, the company has concentrated on a small number of manufacturers, which Mr Cortez also regards as a crucial factor. “In our production experience, a small number of manufacturers have made a lasting impression on us,” he says. What counts most is the quality of the supplied machines, devices, moulds and ancillary equipment. The second-most important factor is their availability. They have to operate reliably and have a long service life. 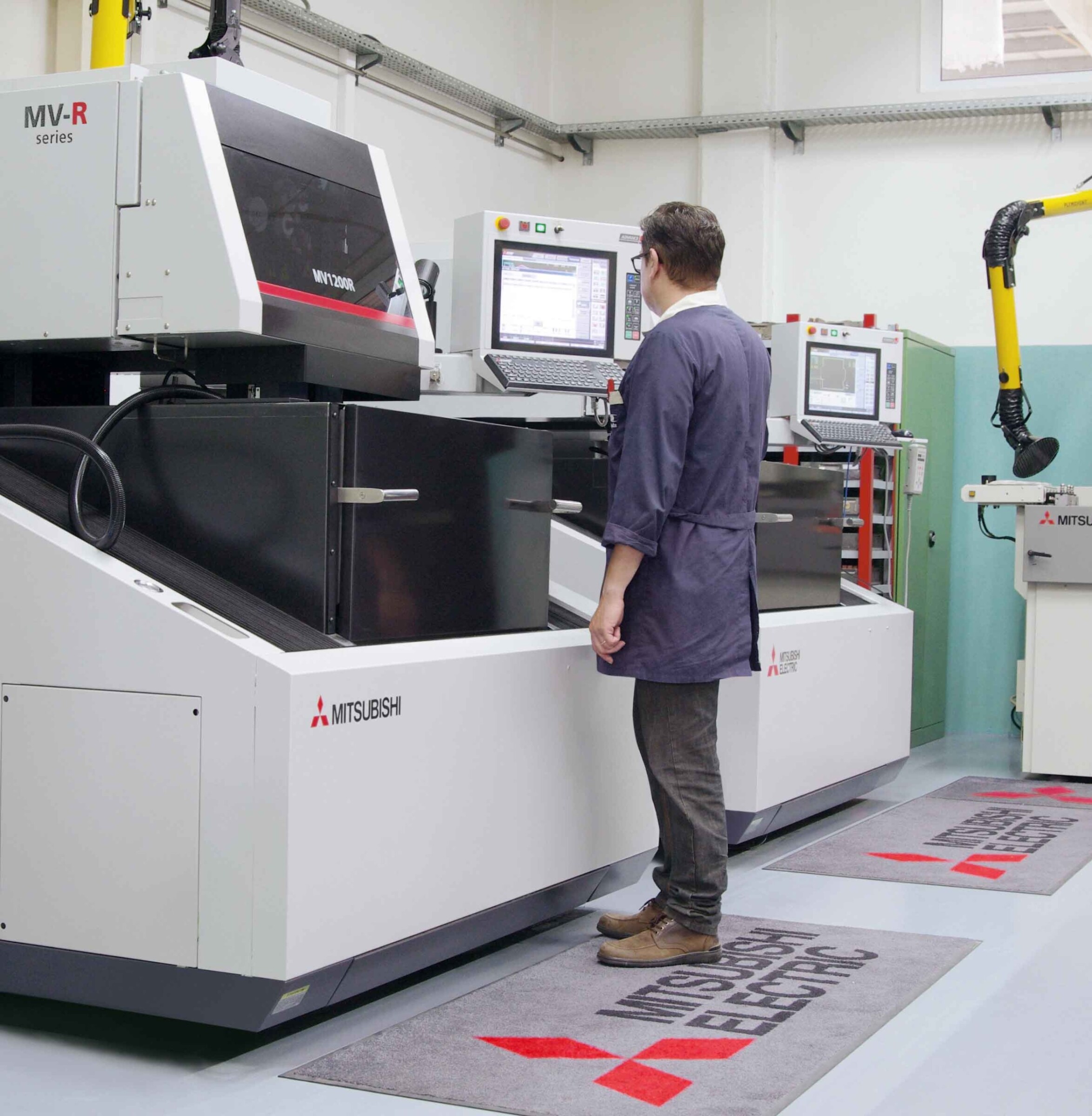 The third point that Cortez is keen to mention is the after-sales service. Even after the investment, the manufacturers and suppliers of the machines and plant must always be capable of making their expertise and required additional equipment and replacement parts available without delay. Mr Cortez explains: “We can only operate productively if we can rely on the quality and availability. Special, particularly high-grade components, be they in mould-making or injection moulding, we can only produce if the machines and moulds used for this are of at least equal quality.”

Quality only feasible with high-grade machines

In tool- and mould-making Cortez has chosen and ­appointed Mitsubishi Electric as its sole machine supplier. The company therefore now has a QA10 in ­successful operation for several years and two recently purchased MV1200R wire-cut EDM systems as well as three die-sinking machines: an EA12D, EA12V and EA8S. One of the MV1200Rs is equipped with a rotational axis (B axis). On these machines, the tool-makers in Grimancelos produce complex injection moulds, most of which they design themselves. They frequently cut copper electrodes on the wire-cutting machines which are then used on the ­die-sinking machines for machining mould inserts. 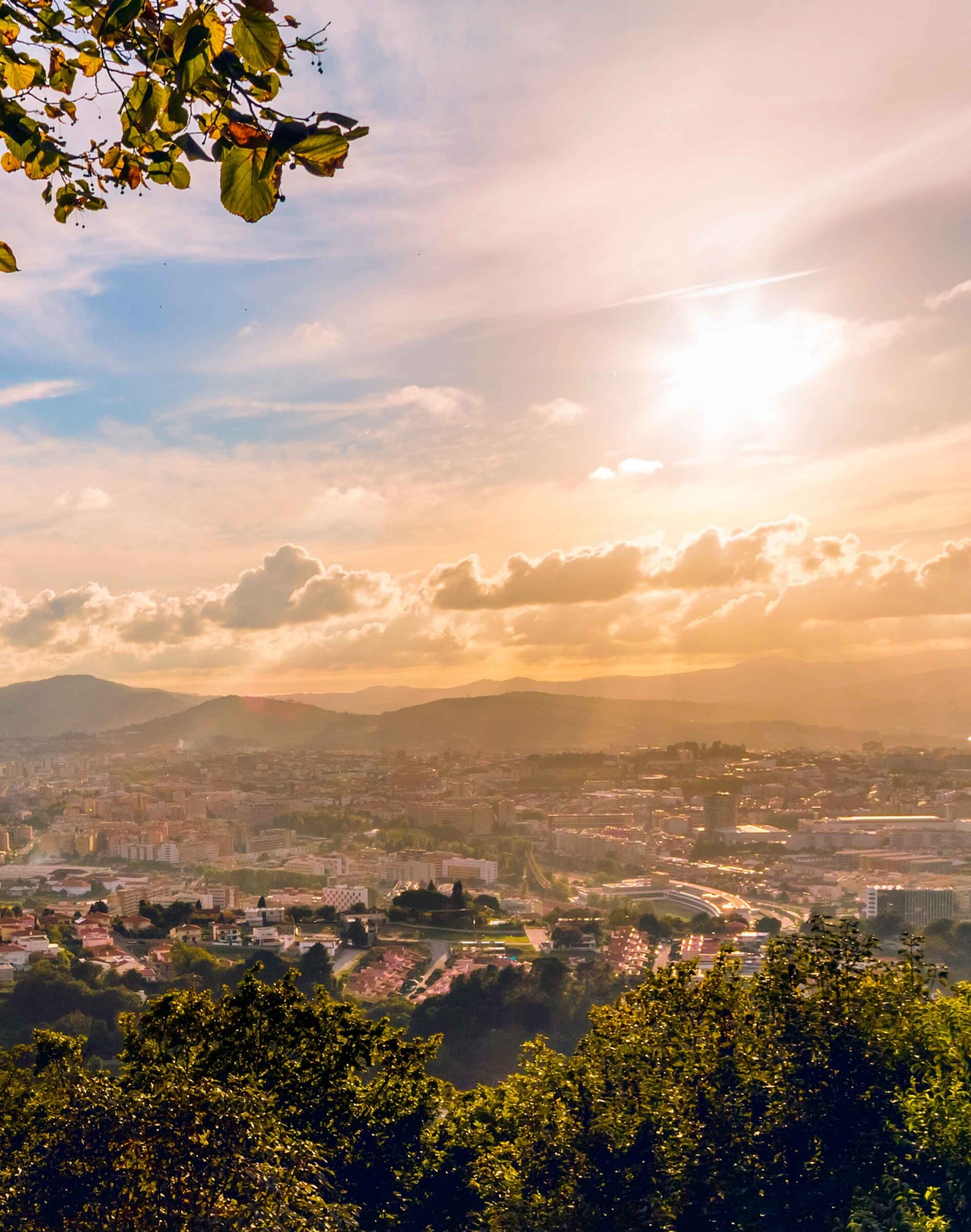 The specialists at Celoplás also produce replacement parts for inserts in injection moulds on the wire-cutting machines. ­Wire-cutting and die-sinking, Mr Cortez ­explains, are often less expensive than grinding. The ­advantages are firstly ­technical, as a wire can be used for ­precision-machining very narrow grooves and the tiniest radii. Despite the long ­machining times, there are also economic benefits. “During grinding, a highly skilled employee has to constantly monitor the process. During ­wire-cutting, the machine operates reliably for many hours unmanned on the basis of pre-defined ­parameters and NC programs,” says Cortez. “This is why EDM on the machines from Mitsubishi Electric is for us a forward-looking technology that we are intent on keeping and developing further.”

A particularly positive feature for Mr Cortez is that wire EDM has given him access to working methods that were previously unthinkable. Among other things, his machinists are thus now capable of repairing intricate mould inserts for the injection moulding of plug connectors. If, for ­example, one of the up to a hundred pins measuring only a few tenths of millimetre in diameter snaps off, the common practice used to be to produce an entire new mould insert. 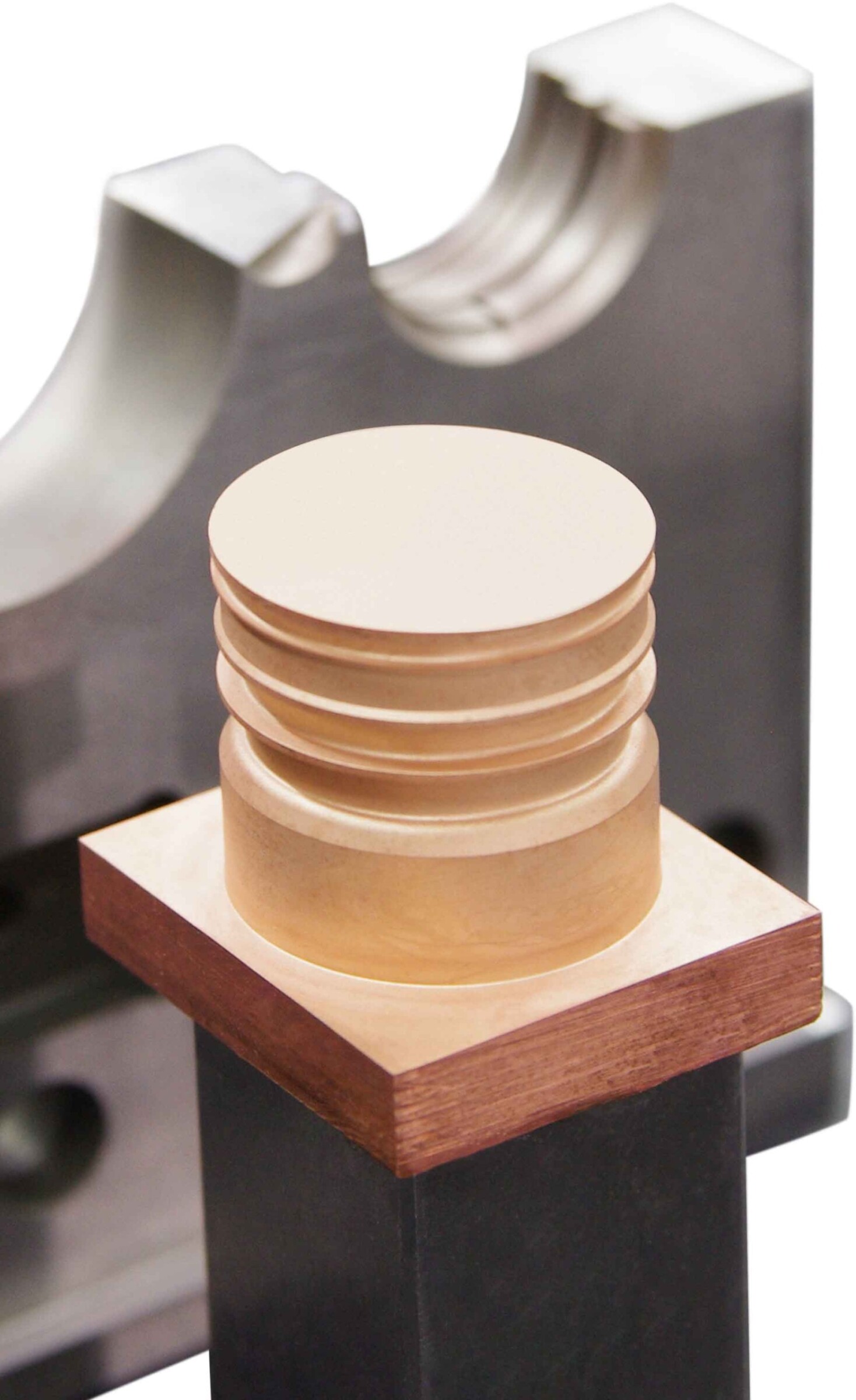 An ideal combination: copper electrodes for the die-sinking of narrow grooves in steel housings, cut on an MV1200

With wire EDM, the specialists in Grimancelos can now precisely cut out the small part of the mould insert containing the broken pin. By wire-cutting they then produce the matching replacement part straight out of a high-temperature steel alloy, which is then integrated in the mould insert. The injection mould is then fully ­functional again. Cortez confirms that this cuts the time and cost of repairing the mould insert. With their high accuracy and precisely settable parameters for cutting speed and surface finish, the wire-cut EDM systems from Mitsubishi Electric go a long way towards making this repair possible.

Core business:
Mass production of high-precision plastic parts and plastic-metal composite parts for the automotive ­industry, medical technology and apparatus engineering, inclusive of tool- and mould-making for and the ­automation of injection moulding machines, mould-­making and injection moulding for micro components

What is your source of motivation?
I firmly believe that only by using special technologies can we in Europe operate profitably and maintain and improve our prosperity.
What prompted you to set up your own business?
I had a lot of ideas for making better and more effective use of plastic as a material. In addition, I wanted to upgrade and strengthen our expertise in Portugal. I have always felt that our country and fellow citizens can do much more than serve as the extended workbench for other countries. However, this first meant building up specialised tool- and mould-making activities. Back in the 1980s, other companies didn’t see any need to.
What technologies set your company apart from the competition?
We are specialists in multi-component injection moulding and in injection moulding with integrated metal parts. In addition, we also have a full command of tool- and mould-making. This means that we can also reliably produce even the most intricate geometries, such as tiny gearwheels of only a few tenths of a millimetre in diameter or visually and functionally visible components for use in cars, in large series using several different plastics, with output of several million components per year.
What are you particularly passionate about?
I’m very passionate about training and cooperation between companies in Portugal. Only with outstandingly trained staff can we maintain and build on our expertise. For this, however, we need cross-company cooperation. Regrettably, there’s little awareness of the need among companies in Portugal, which is why I ensure that young people in my company get sound training.
What is the overriding principle governing your work?
Superlative achievements and top quality are only possible with high-grade equipment and highly skilled staff. This is why I attach great importance to always choosing the world’s best from the huge selection of machines and production plant. 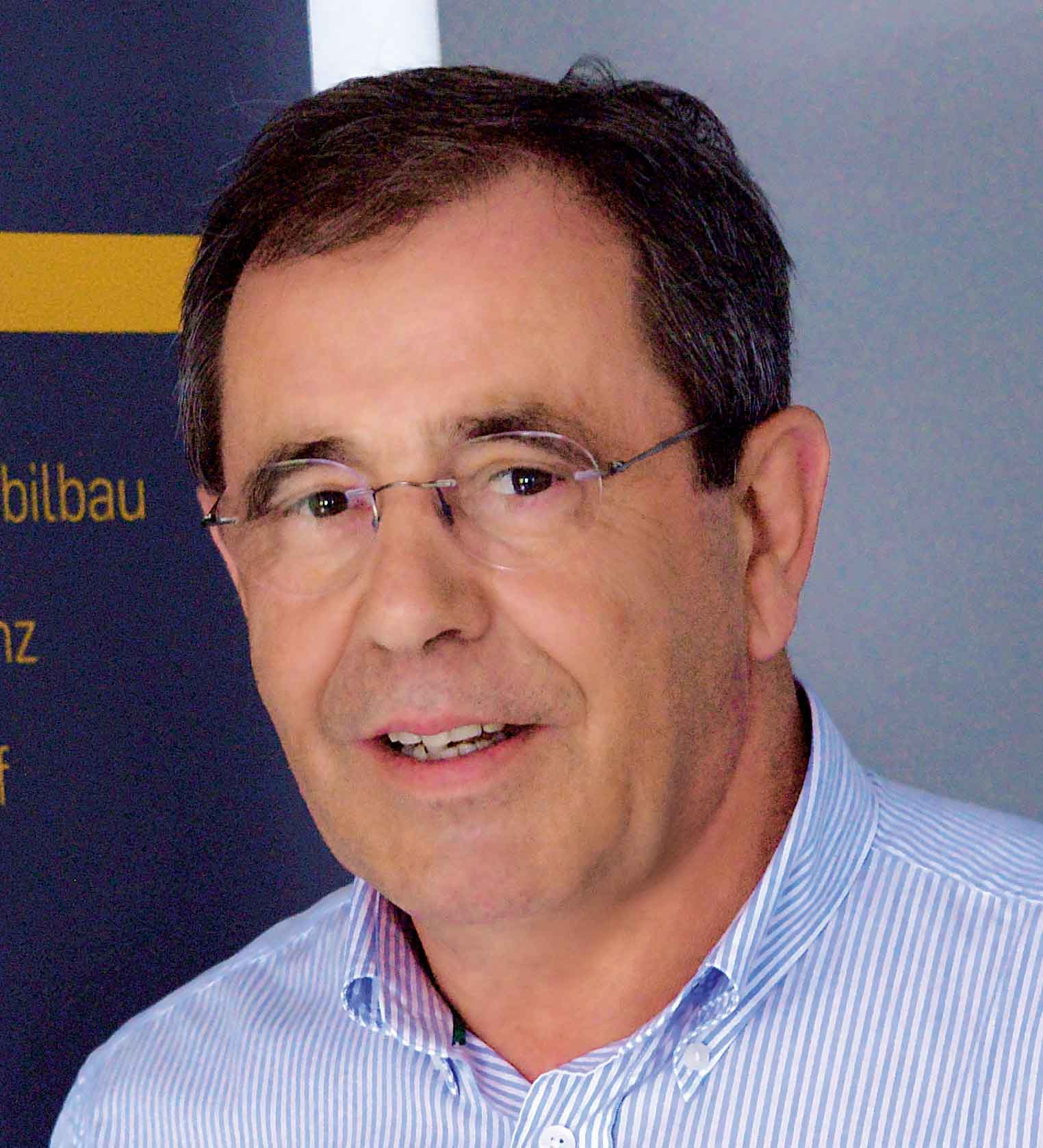