Instead of tedious and laborious milling, turning, grinding, lapping and polishing, Winkler Präzisionswerkzeuge GmbH in Lauffen am Neckar exploits the potential of wire-cut EDM production engineering. On an MP1200 Connect, the specialists produce backlash-free mating slides for grippers and clamping systems with micrometre precision. 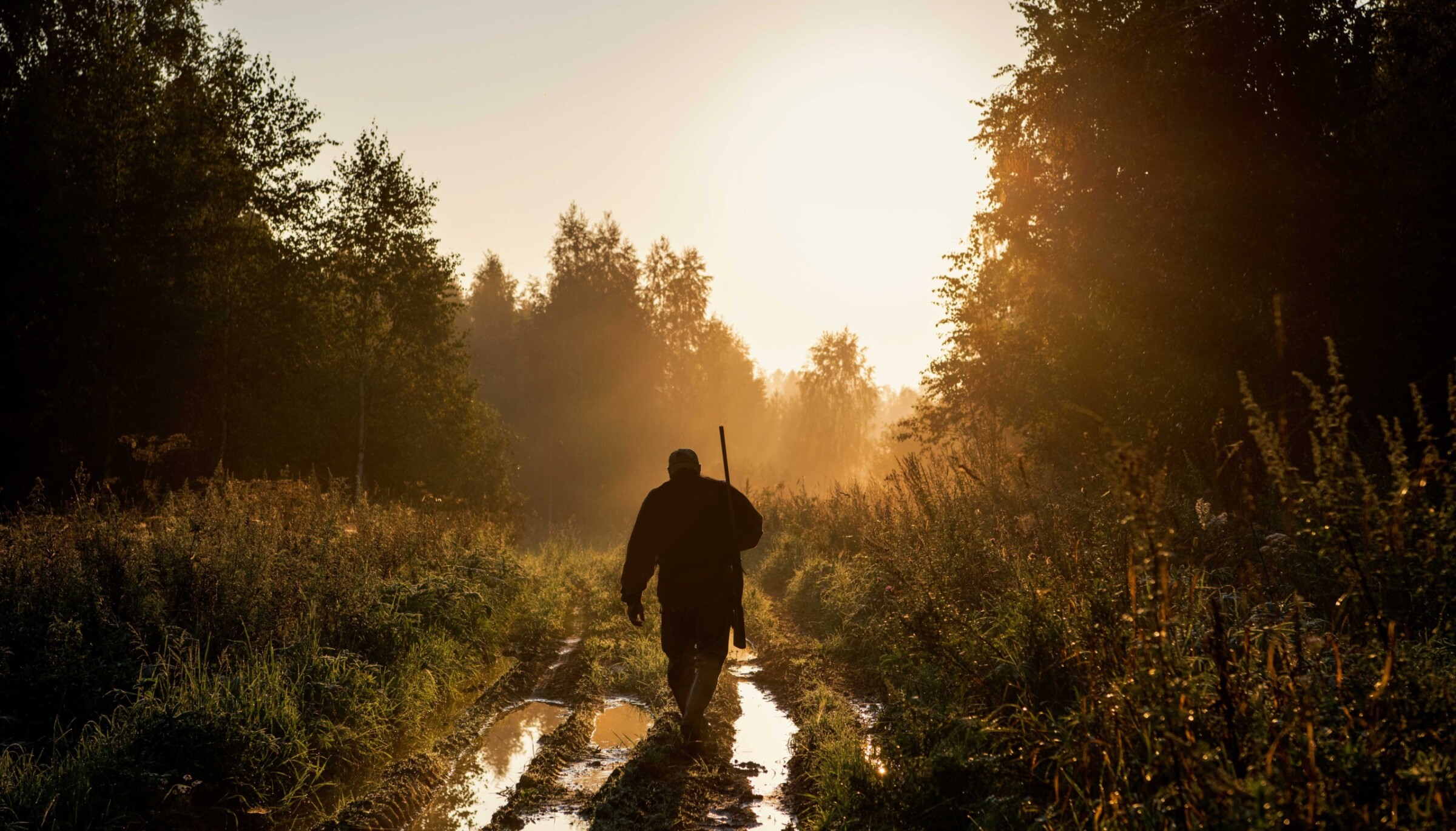 What Ludwig IV and V get out of their eroding machine

In the production of technically and visually sophisticated hunting weapons, gunsmiths rely on their instinct for materials, function and design as well as their craftsmanship. But they have to hold their own in the face of international competition. That is why Ludwig Borovnik, a successful gunsmith in Ferlach, Austria, now in its sixth generation, has invested in a die-sinking and a wire EDM machine from Mitsubishi Electric.

EDM for UNESCO World Cultural Heritage. What Ludwig IV and V get out of their eroding machine.

Ludwig Borovnik Guns & Rifles in Ferlach is well-known and recognised worldwide as a manufacturer of high-quality hunting rifles. Hunters and collectors appreciate them for their high reliability, outstanding accuracy and exceptional aesthetic finish. Finely engraved with artistic motifs, the lock cases harmonise perfectly with sophisticated breech, trigger and safety systems. Durable, ergonomically adaptable stocks made of selected precious and root woods contribute to perfect precision and complement the high-end look of the hunting rifles to best effect. Ludwig Borovnik also realises unusual combinations of calibres, trigger and safety mechanisms (locks). There are double-barrel rifles and shotguns as well as triple-barrel rifles with barrels arranged either one above the other or side-by-side in different combinations for a variety of bullet and shot calibres. Versions with an external trigger satisfy the nostalgic wishes of lovers of robust rifles. These hunting rifles have stood the test of time worldwide as reliable, universal implements in the hunt for big, cloven-hoofed, small and feathered game. 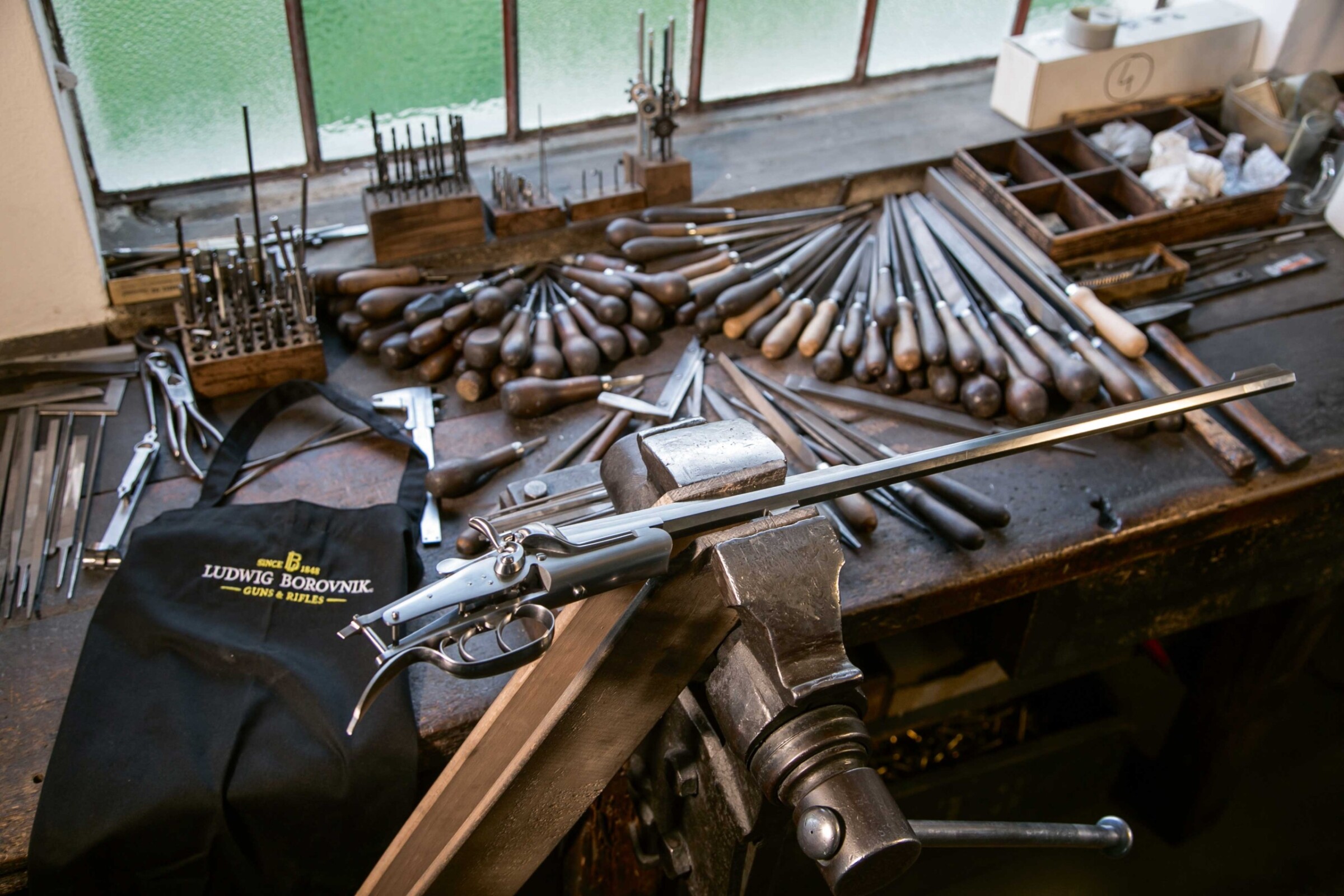 Precision craftsmanship as a quality feature

Ludwig Borovnik in Ferlach tells us that most armourers and gunsmiths craft their weapons by hand. He himself is an engineer and learned the craft of gunsmith. He belongs to the fifth generation to work in the company. ”It takes about two years to make a high-quality hunting rifle. Our skilled gunsmiths, shafters and engravers work hand in glove. The outcome is not only weapons of the highest technical and functional precision and quality, but also true works of art in terms of appearance,” Borovnik explains. These are highly appreciated by hunters and connoisseurs all over the world, he continues. However, the elaborate manual production process also has its price. Borovnik has become increasingly aware that even the most affluent enthusiasts will compare prices internationally, so he is keen to find ways to maintain his successful position in the global marketplace. He has been quick to appreciate the benefits of the partially industrial production of certain components. ”This applies above all to the prefabrication of the mechanical elements, i.e. the lock case and the many individual parts of the trigger and safety. Here we hope to shorten machining times. By pre-machining items on state-of-the-art industrial tools, we aim to significantly accelerate machining while upholding the utmost precision,” Borovnik explains. 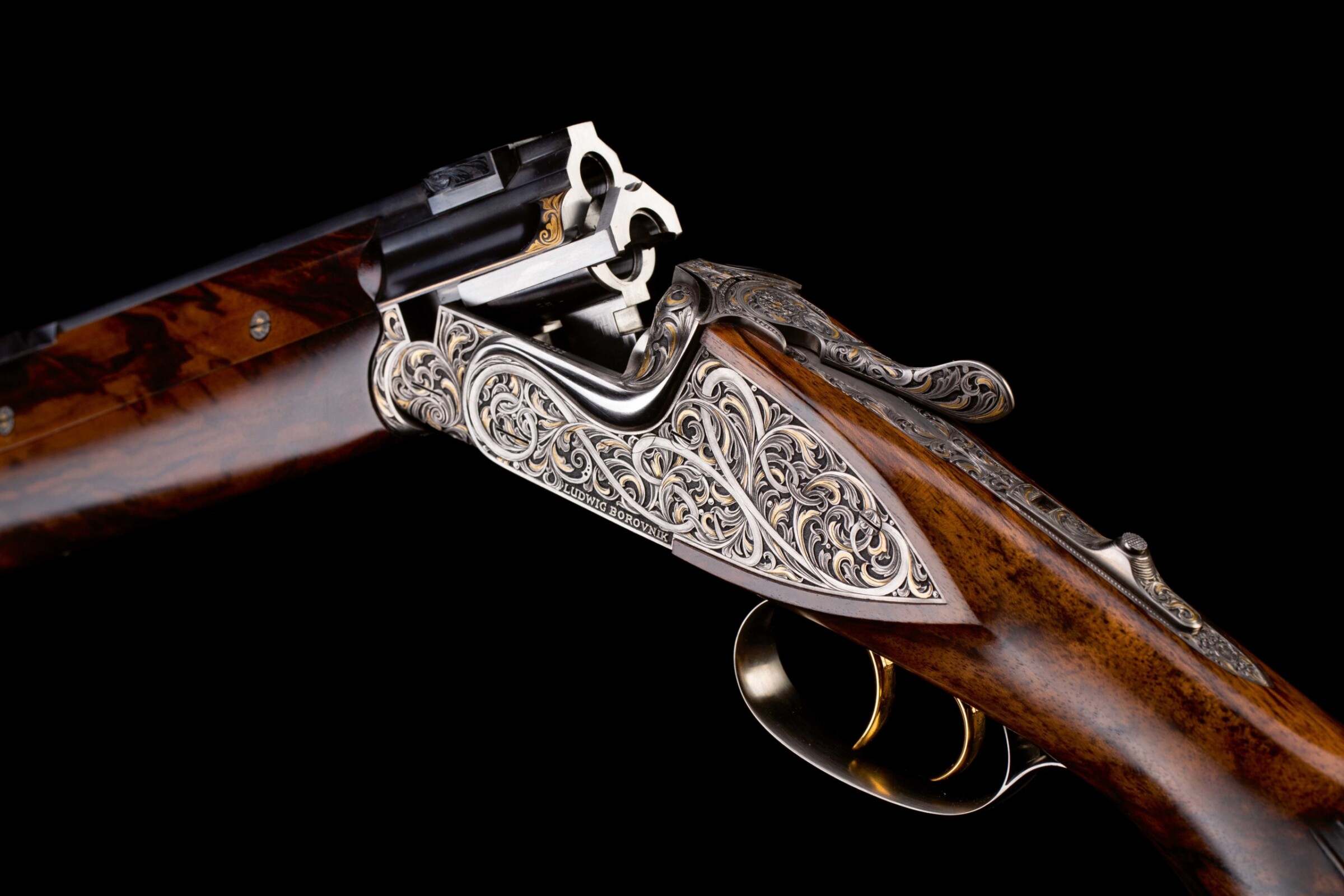 It takes about two years to make a high-quality hunting rifle. Our skilled gunsmiths, shafters and engravers work hand in glove. The outcome is not only weapons of the highest technical and functional precision and quality, but also true works of art in terms of appearance.
Ludwig Borovnik, sixth-generation gunsmith at Ludwig Borovnik KG

After carefully comparing several manufacturing processes and machines, the gunsmiths in Ferlach decided to invest in EDM technology. They found suitable machines at Mitsubishi Electric. The gunsmiths now use an EA12S die-sinking EDM machine and an MV1200S NewGen wire EDM machine. ”Mitsubishi Electric won us over right from the start with their demos. The machines are easy to operate and have an excellent price-performance ratio for us. In addition, our workshop manager Marin Micic already had experience with such machines,” Borovnik reports. On the MV1200S NewGen wire-cutting machine, the gunsmiths mainly machine the blanks for the breech and the lock case. These are joined by a number of components for the complex trigger and safety systems. This is done to an accuracy of about 0.01 mm, says Borovnik. However, the accuracy only plays a subordinate role, since it is important to machine all geometries at precise angles to each other. Then the pre-machining considerably shortens the time from the blank to the finished component, which is manually fitted and adjusted by the gunsmiths to the highest precision and accuracy of fit. 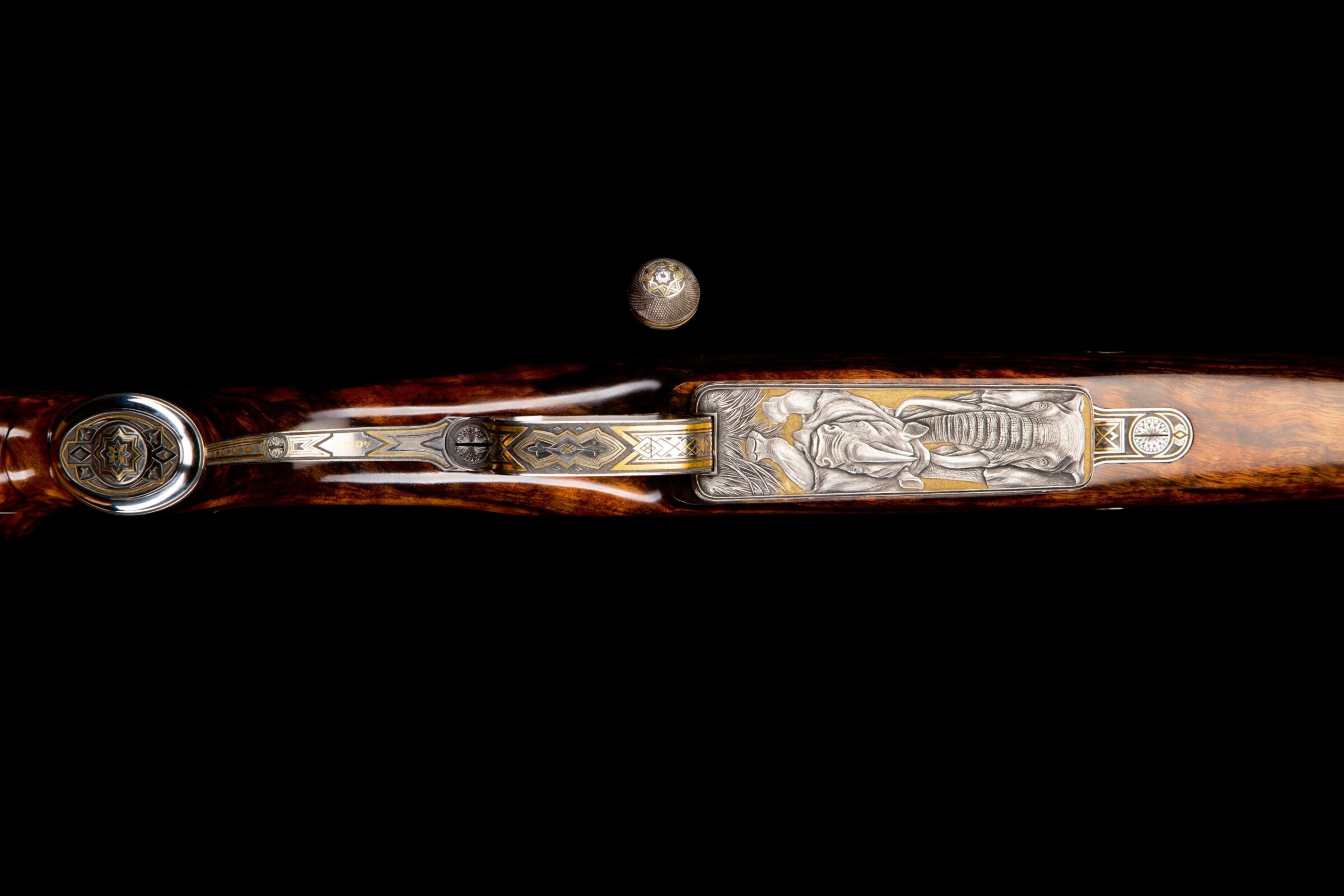 Instinct for materials function and design.

For gunsmiths in particular, Borovnik sees an outstanding advantage over other machining methods, such as milling: ”We machine extreme high-quality and therefore costly grades of steel, which are melted down in small batches especially for gunsmiths. That’s why we have to make sure that we make the best-possible use of the blanks. Wire-cut EDM produces only narrow kerfs. There’s no swarf, so there’s no waste.” The gunsmiths also machine some geometries for different parts of the breech, trigger and safety mechanism using die-sinking EDM on the EA12S. For this, the electrodes of copper are produced on the MV1200S NewGen, Borovnik continues. He sees the combination of the two machines as the optimal solution for his company. 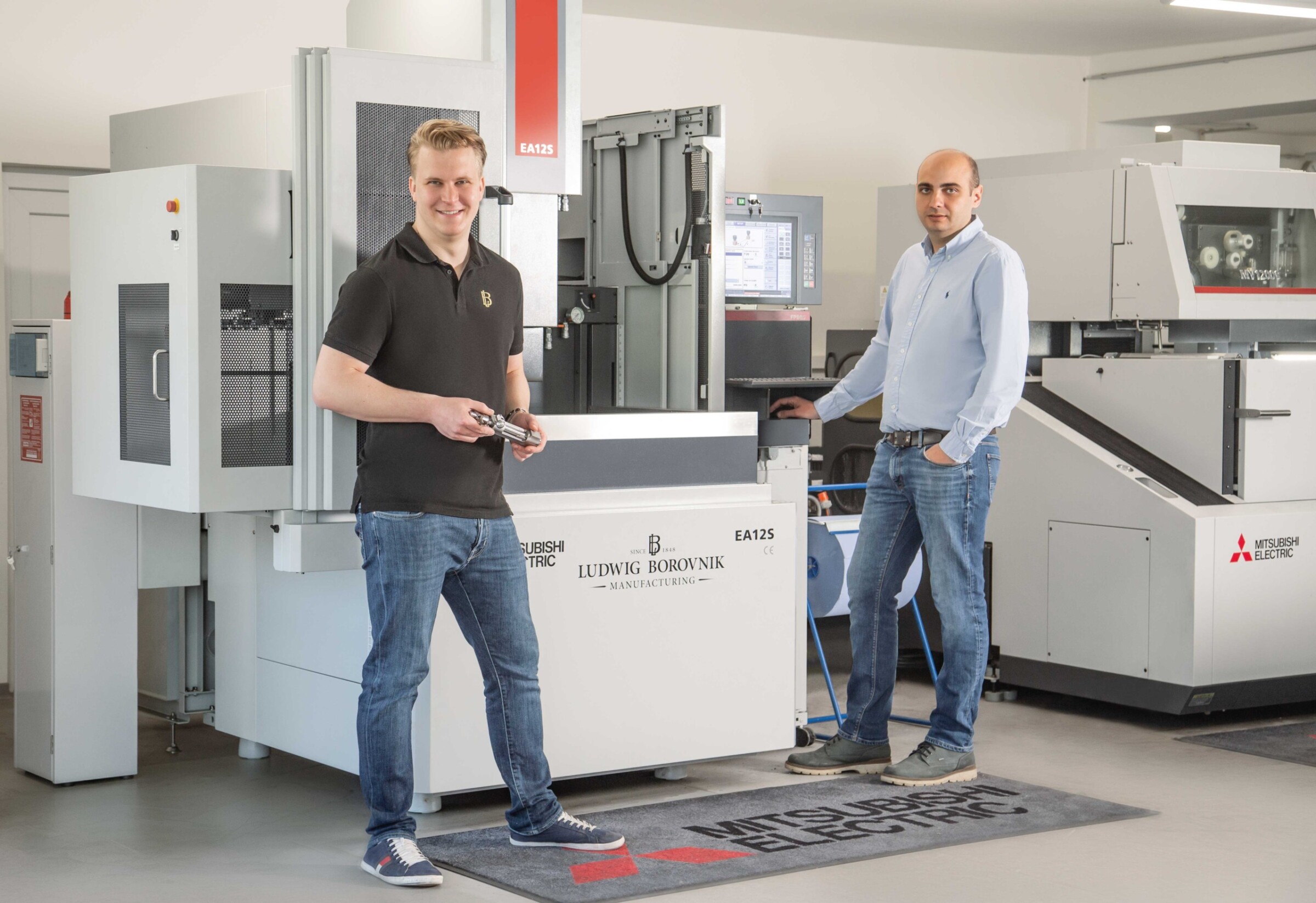 For specialist craftspersons like gunsmiths, high-tech methods often take some getting used to. But not so at Borovnik in Ferlach. ”We were given several days of training by Mitsubishi Electric. The programming and operation of the EDM systems from Mitsubishi Electric is very easy and rapidly grasped thanks to the current technology similar to the smartphone user interface. Our workshop manager Marin Micic also had previous experience of CNC machines. So, within a few days, we were able to machine components productively and efficiently with the MV1200S NewGen and EA12S,” says Borovnik. After a few weeks, he and his workshop manager had passed on their expertise of the EDM machines acquired during training to other skilled hands in the company. Programming is usually done directly on the wire EDM. The components are designed as 2D drawings (DXF data) on the CNC control, given the necessary parameters and then machined. ”We were all surprised at first how easy it actually is,” says Borovnik summing up his experience with the high-tech EDM equipment. 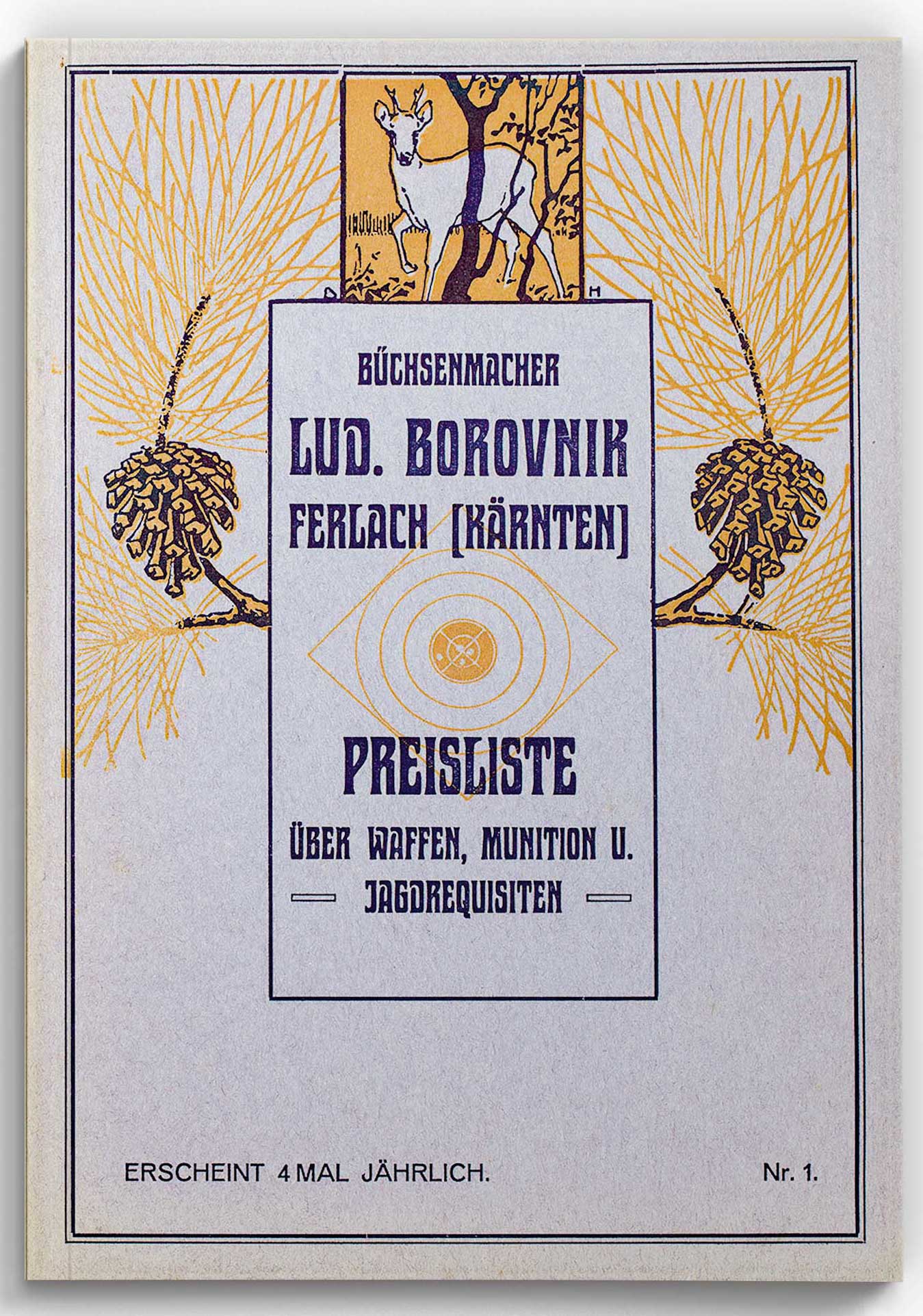 Catalogue cover from the year 1900 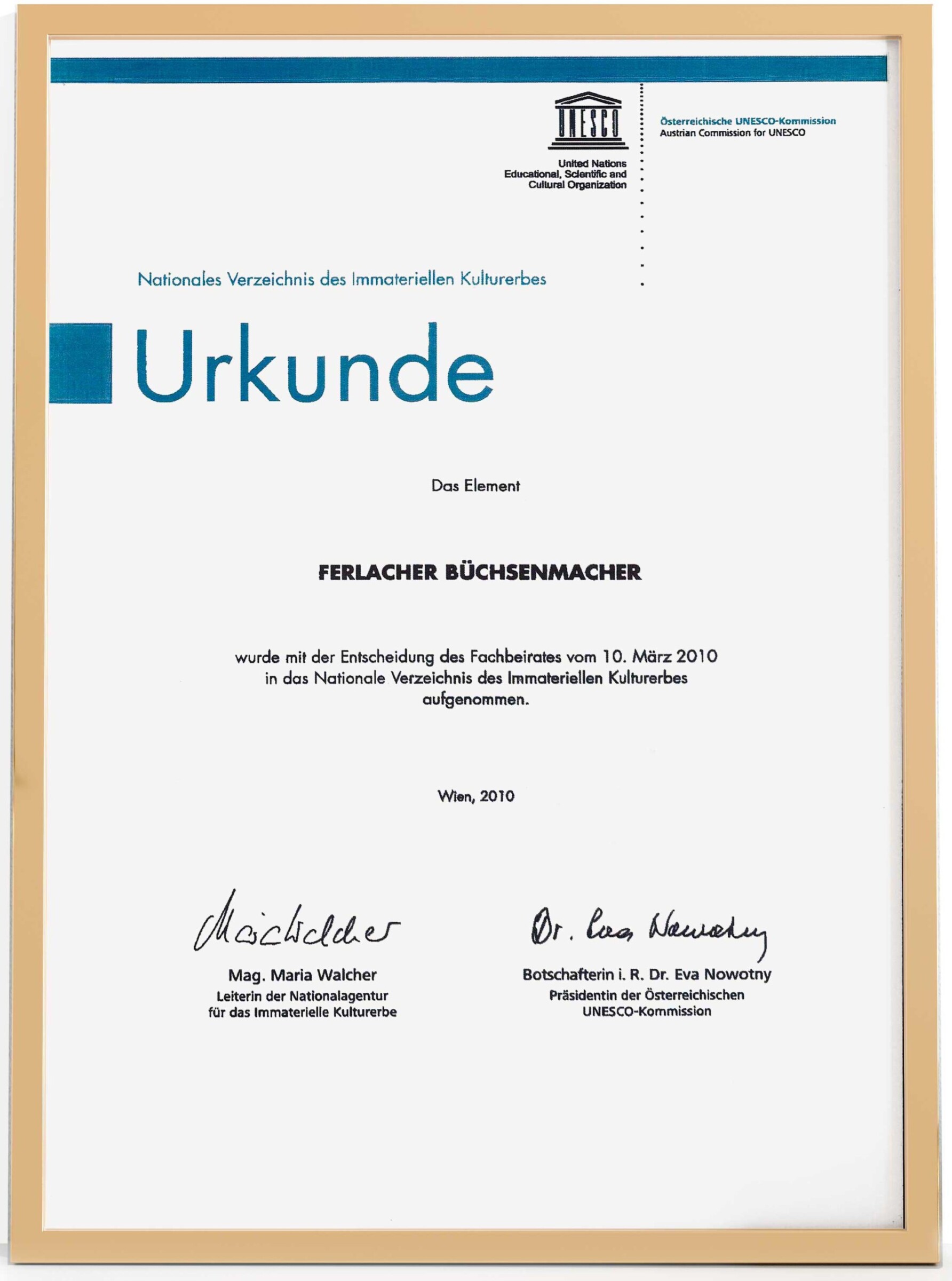 Highest distinction: Even UNESCO appreciates the special achievements of the Perlach gunsmiths and is honouring them as World Cultural Heritage. 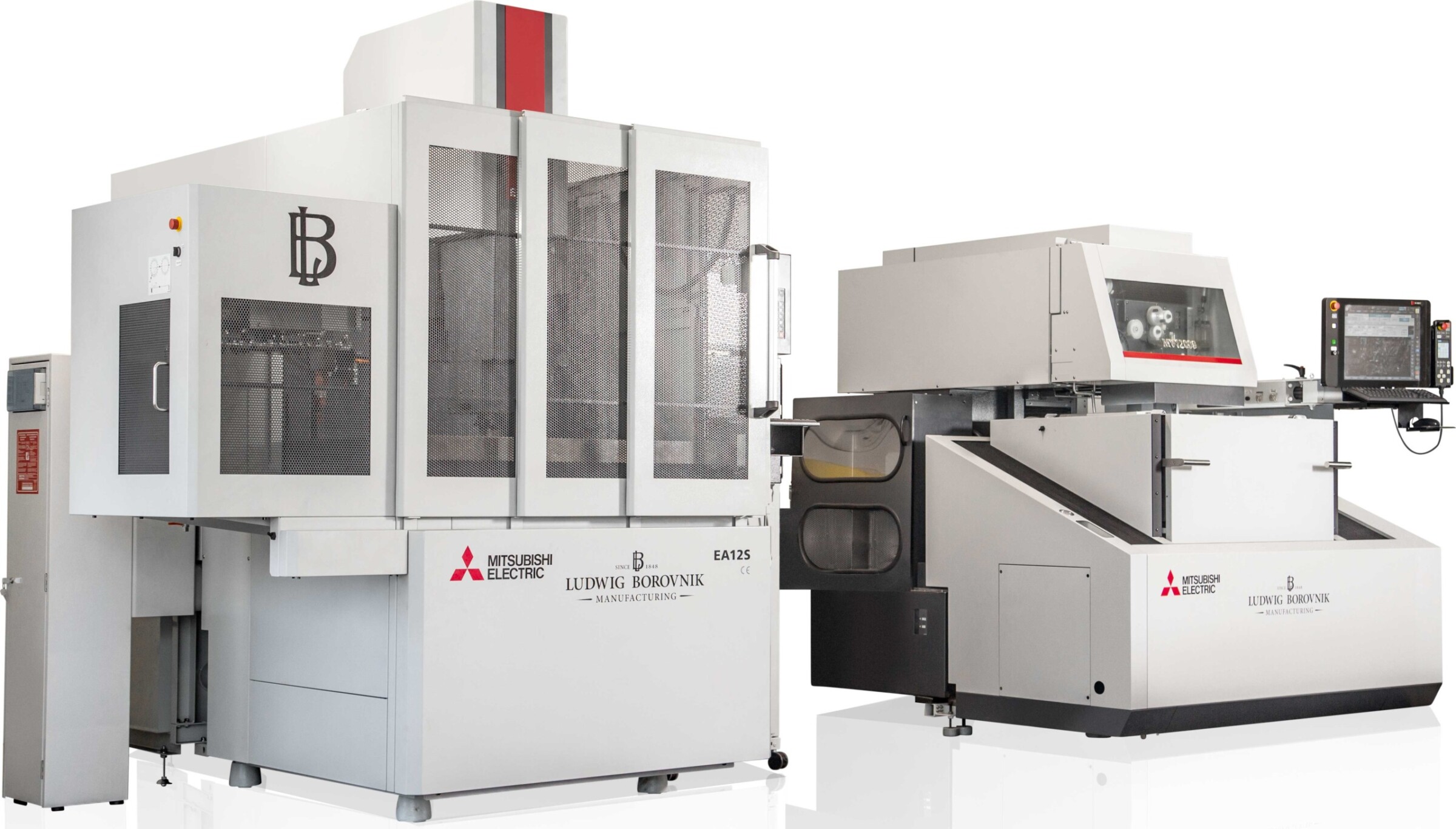 Mitsubishi Electric won us over right from the start with their demos. The machines are easy to operate and have an excellent price-performance ratio for us.
Ludwig Borovnik, sixth-generation gunsmith at Ludwig Borovnik KG 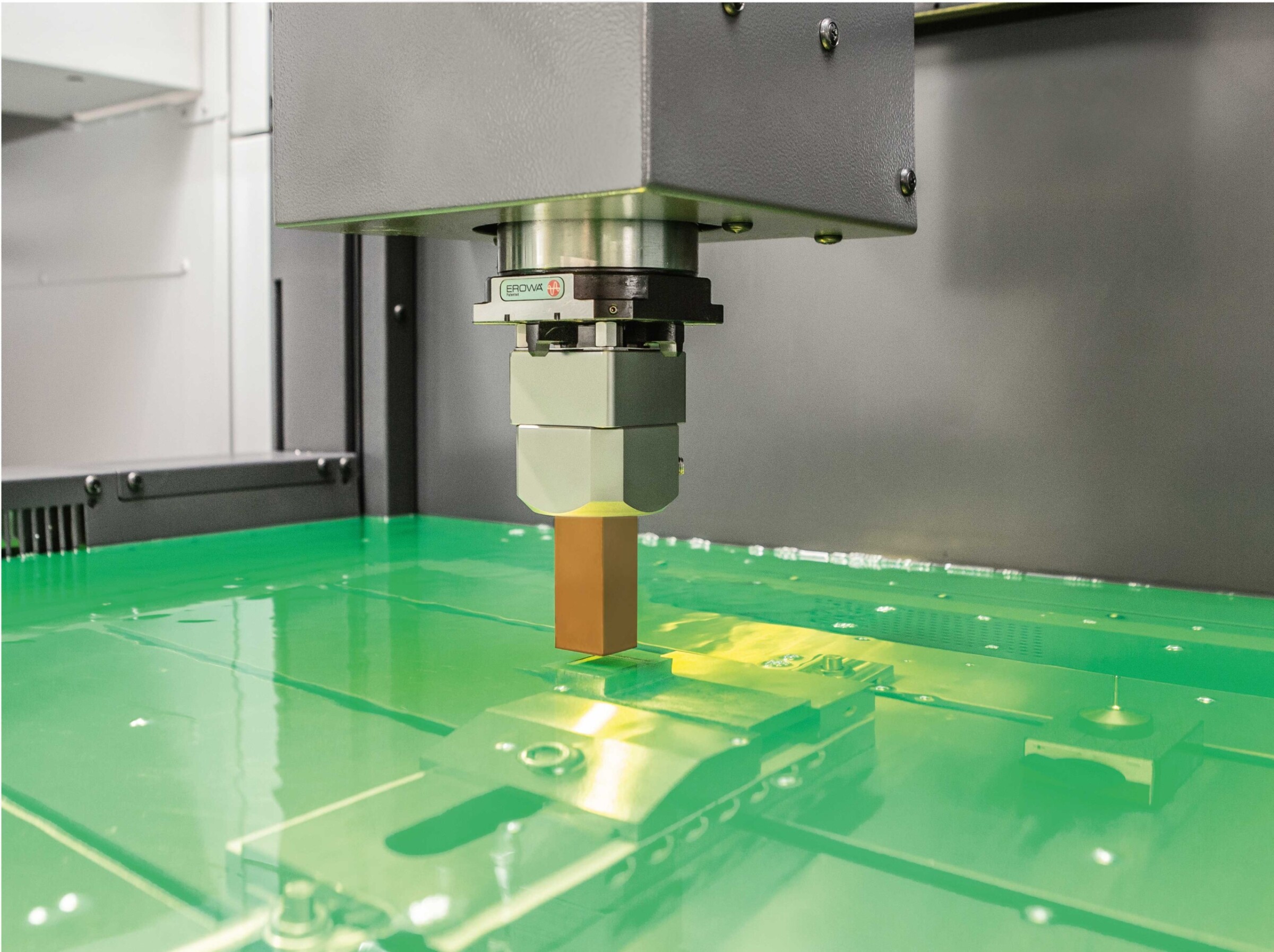 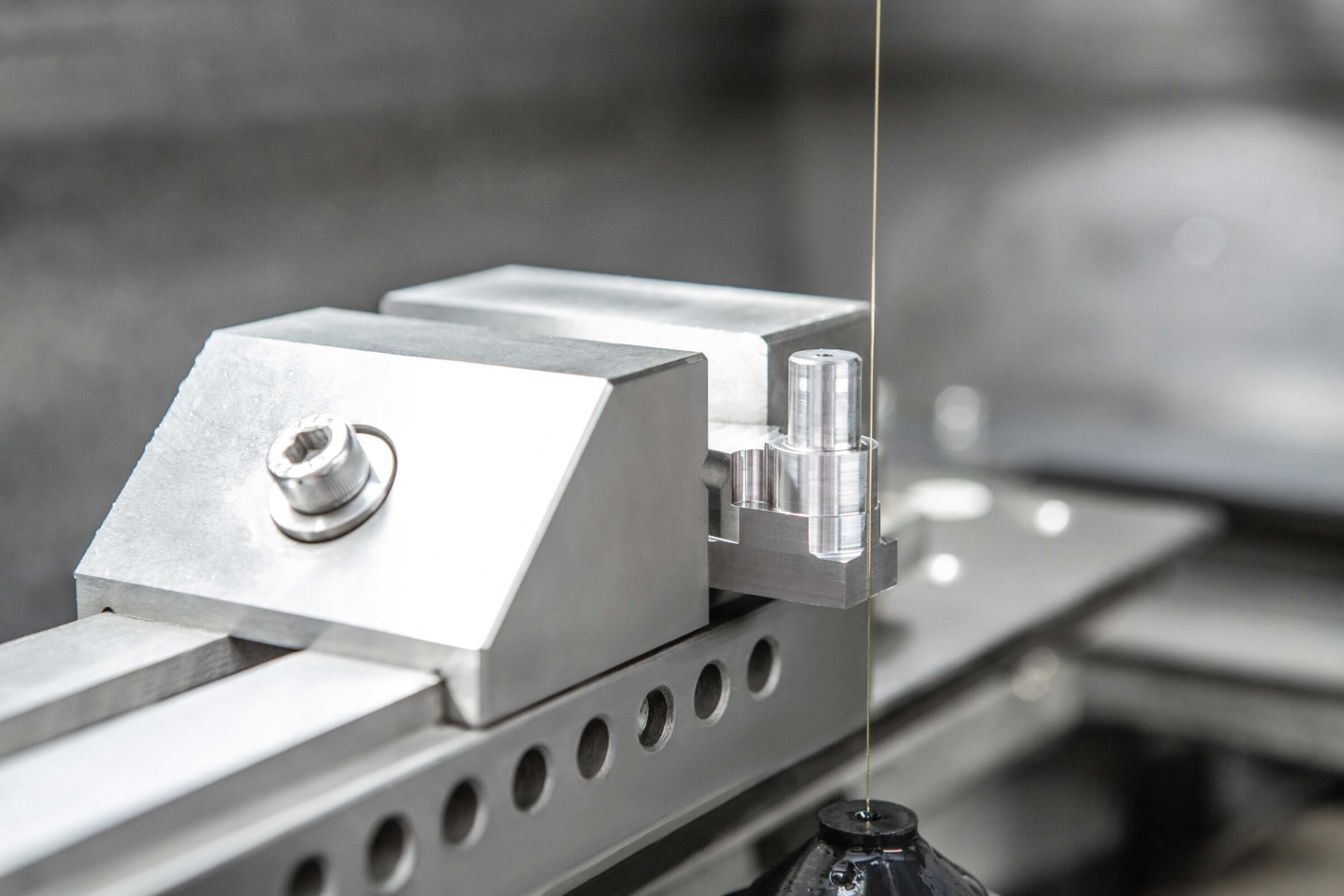 The blanks for the breech and the lock case are machined on the MV1200S NewGen wire-cutting machine.