From glass finishing to medical technology and space technologies 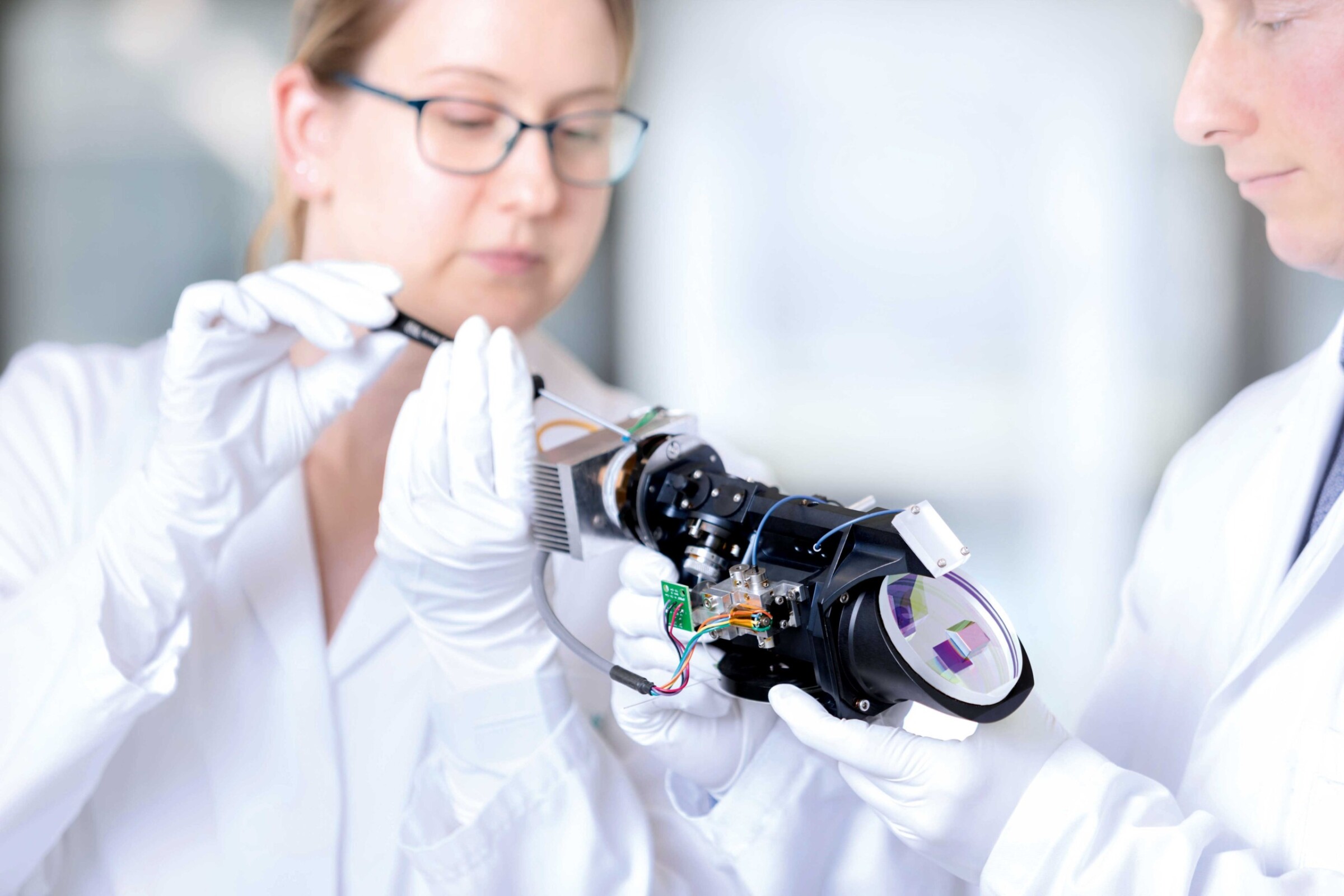 The prototyping of high-end precision parts places the highest demands on the available machinery. Berliner Glas therefore decided to purchase a MV2400R Connect wire EDM machine for the Mechanical Workshop & Mechanical Prototyping and Research & Development departments. This technology offers huge potential for sustainably improving the quality of prototypes and thus of subsequent series-produced products as well.

The Berliner Glas Group is one of the world’s leading suppliers of key optical components, assemblies and systems, high-quality finished technical glass and glass touch assemblies. More than 1,500 employees, 945 of these at the Berlin headquarters, work for the light-using industry at five locations in Germany, Switzerland and China. The company develops, manufactures and integrates system solutions that are used in medical technology, the semiconductor industry, measurement technology, laser and space technologies, and the display industry. In 2018, the Group generated sales of EUR 223 million.

The machinery available in-house covers all machining processes and comprises various CNC-controlled lathes and milling machines, state-of-the-art multi-axis machining centres and a large number of ­die-sinking EDM systems. Until now, wire erosion has not been used in-house, with suppliers contributing this technology to production on an ad-hoc basis. The research and development, prototyping and jig and fixture construction units serve the Group’s various business units. They also have appropriate machinery at their disposal, which has now been supplemented by the newly purchased MV2400R Connect wire EDM machine from Mitsubishi Electric. Direct access to this wire EDM machine enables these departments to reconcile the designed component geometries with suitable processing steps at the prototyping stage and to check feasibility at the same time. Among other things, this approach facilitates optimal preparation for future technological requirements and the reliable provision of feasibility studies and prototyping. In addition, it also makes parameters and empirical values available regarding material behaviour and production times while providing insights that are likely to be of interest in later series production. Until now, external companies have been commissioned to produce prototypes when wire EDM was required for the machining of an attachment made of ­titanium, stainless steel, aluminium or ceramics. As the batch size is 1, delivery times may be nine weeks or longer, and this limits the ability to serve potential customers. The declared goal now is to be able to produce a prototype within six weeks at the latest. 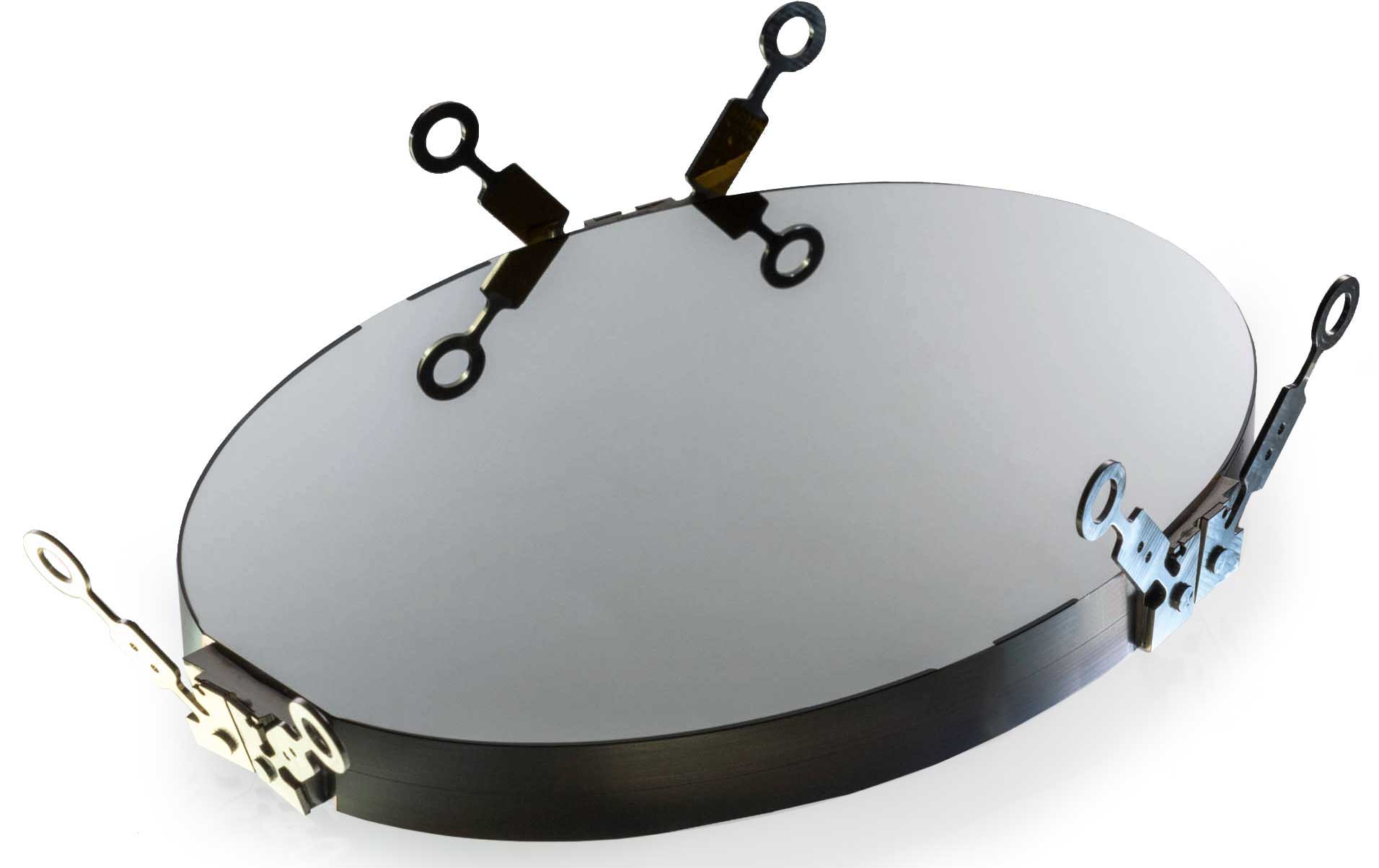 Decision not made easy

In the run-up to the decision-making process, the persons in charge were guided by various reference companies that have acquired extensive experience with wire EDM machines. The findings and tests performed were impressive in terms of the demanded parameters. Other big-name competitors were also considered, but ultimately it was the price-performance ratio that was decisive. The investment included the by no means insignificant fine wire option as well as a CNC start-hole drilling machine for the exact positioning of the start and threading holes for subsequent wire cutting. The wire diameters used are 0.05 to 0.3 mm. In addition, the company purchased DCAM, the special ­­CAD/­CAM system for NC programming and control, inclusive of multi-axis machining. 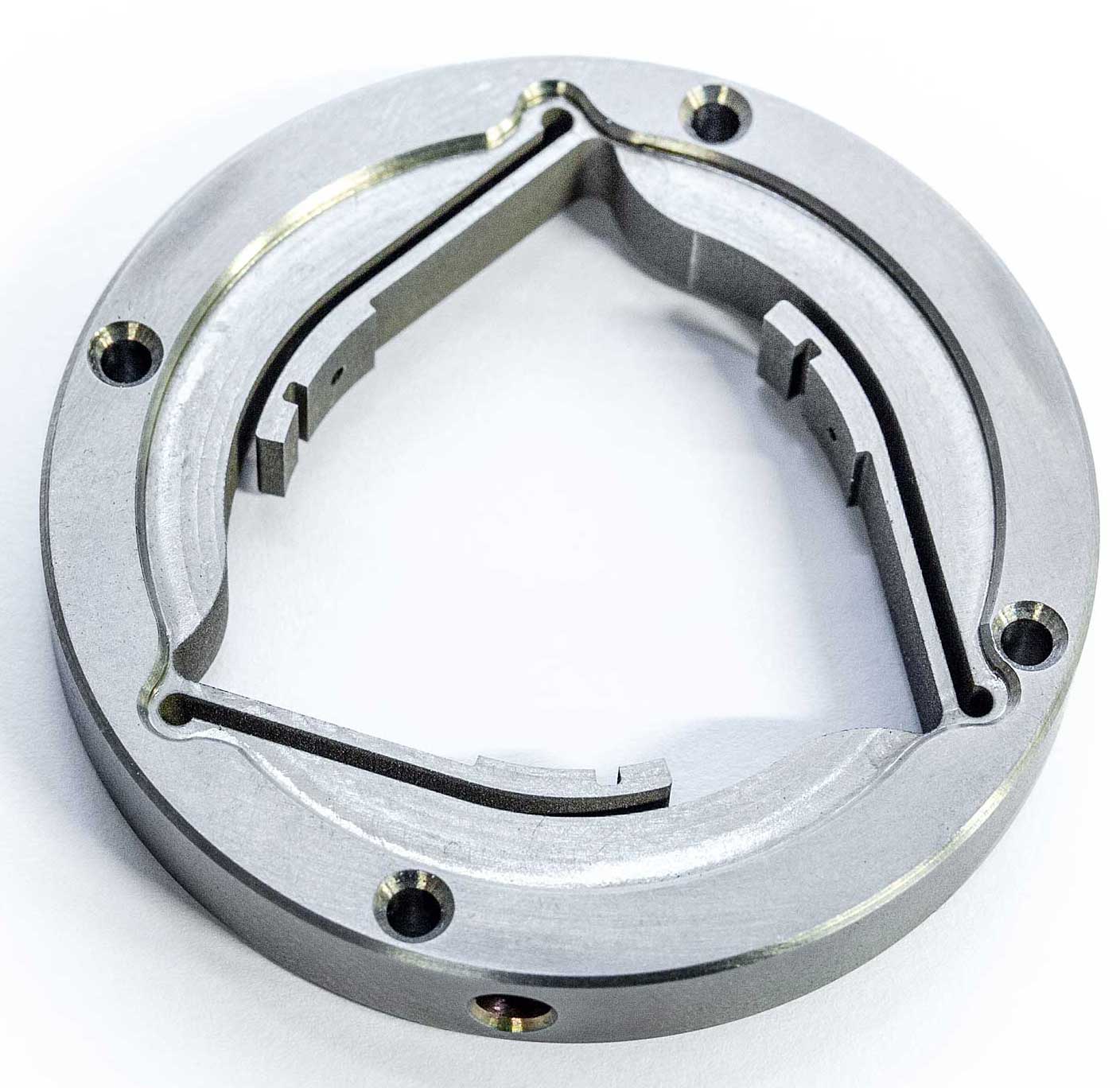 Lightweight titanium lens holder as part of an assembly. The EDM machining was done on the MV2400R Connect: 45 mm in diameter, 6.6 mm thick and 0.7 mm web width.

“Originally, we were looking to purchase an MV1200R Connect, but since the R&D department was also
showing great interest, we were able to increase our budget to meet future requirements with an even more powerful machine, the MV2400R Connect,” says Martin Garske, Head of Mechanical Workshop & Mechanical Prototyping Manufacturing. “In the medical applications sector, it is particularly important to meet the requirements of the market with highly sophisticated products such as lens assemblies, mirrors and lenses. Feasibility and prototyping in the handling of high-performance materials that can be processed particularly by ablative processes therefore enjoy high priority. These are primarily high-precision miniature components whose machining requires the tiniest corner radii, highly intricate contours and exceptional surface finish.” 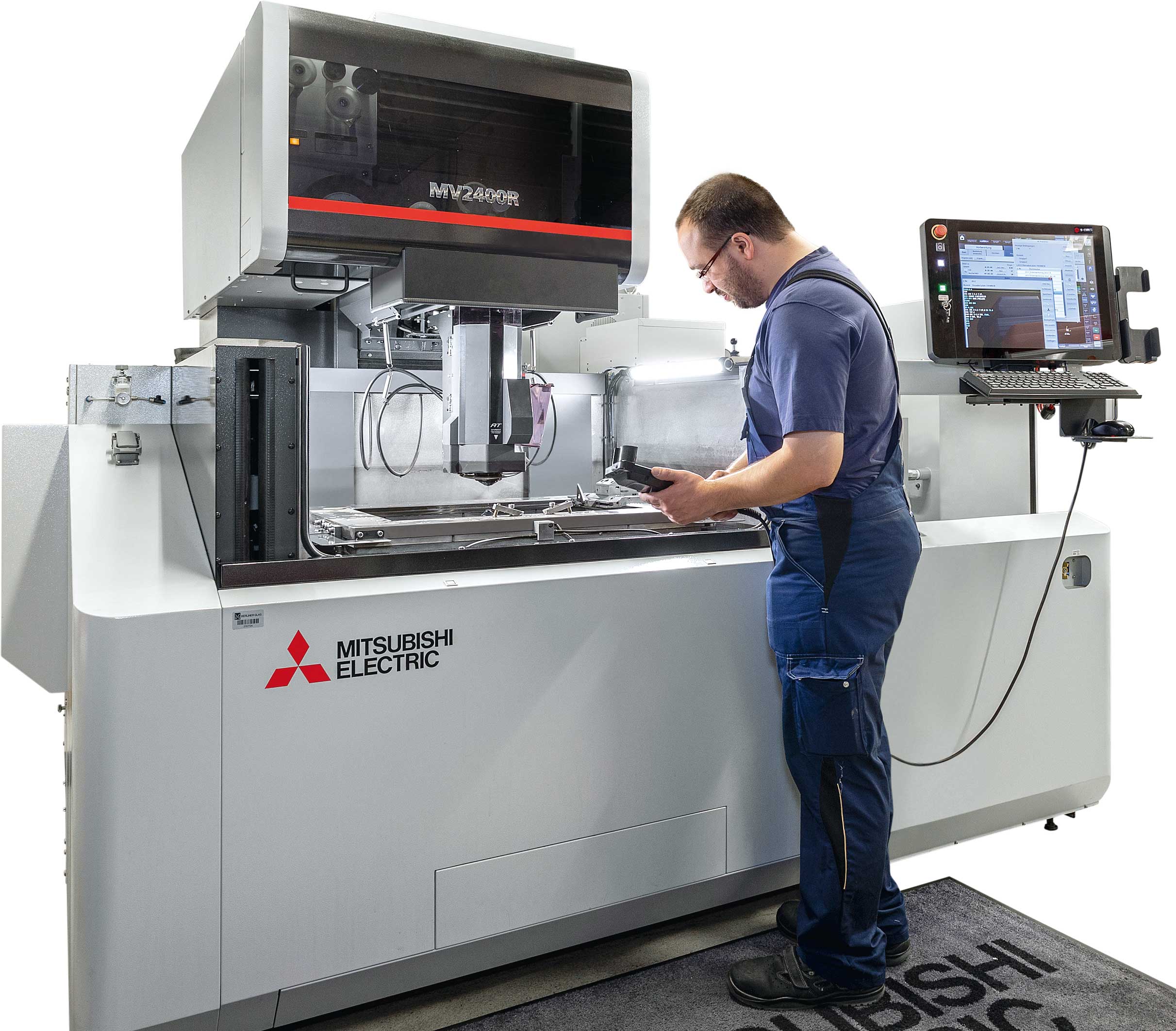 The MV2400R Connect impressed with its optical drive system (ODS), in which the tubular direct drive with its linear technology ensures cogging-free movements of the axes and positioning accuracy of ±2 µm over the entire traverse path. With the Precise Finish Circuit, for example, surface qualities of Ra 0.28 µm can be achieved in four steps. On top of this, there was dialogue-supported operator guidance, the machine’s good accessibility and the advantageous Intelligent AT automatic wire threading into the kerf. The Connect version also features ergonomic machine design. Set-up, programming, maintenance tasks and much more can be carried out directly at the front of the machine. In addition, there is the neat D-CUBES process monitoring which provides, among other things, information and analyses at a glance. The safety aspect is not neglected either: axial forces, load changes and obstacles in the travel paths are detected by the Crash Protection System. Nevertheless, the machine’s outstanding energy efficiency was also welcomed, although it is not so important in prototyping.

Shortly after the commissioning of the MV2400R Connect in the first quarter of 2018, senior management asked the prototype construction department if an existing product, a lens mount, could be produced with the newly purchased wire EDM machine. It is a highly sophisticated and intricate component for the low-tension mounting of an optical component. The staff recently trained in wire eroding by Mitsubishi Electric in Ratingen were happy to take up this challenge. In fact, they passed the test with flying colours, confirming that they were on the right track. 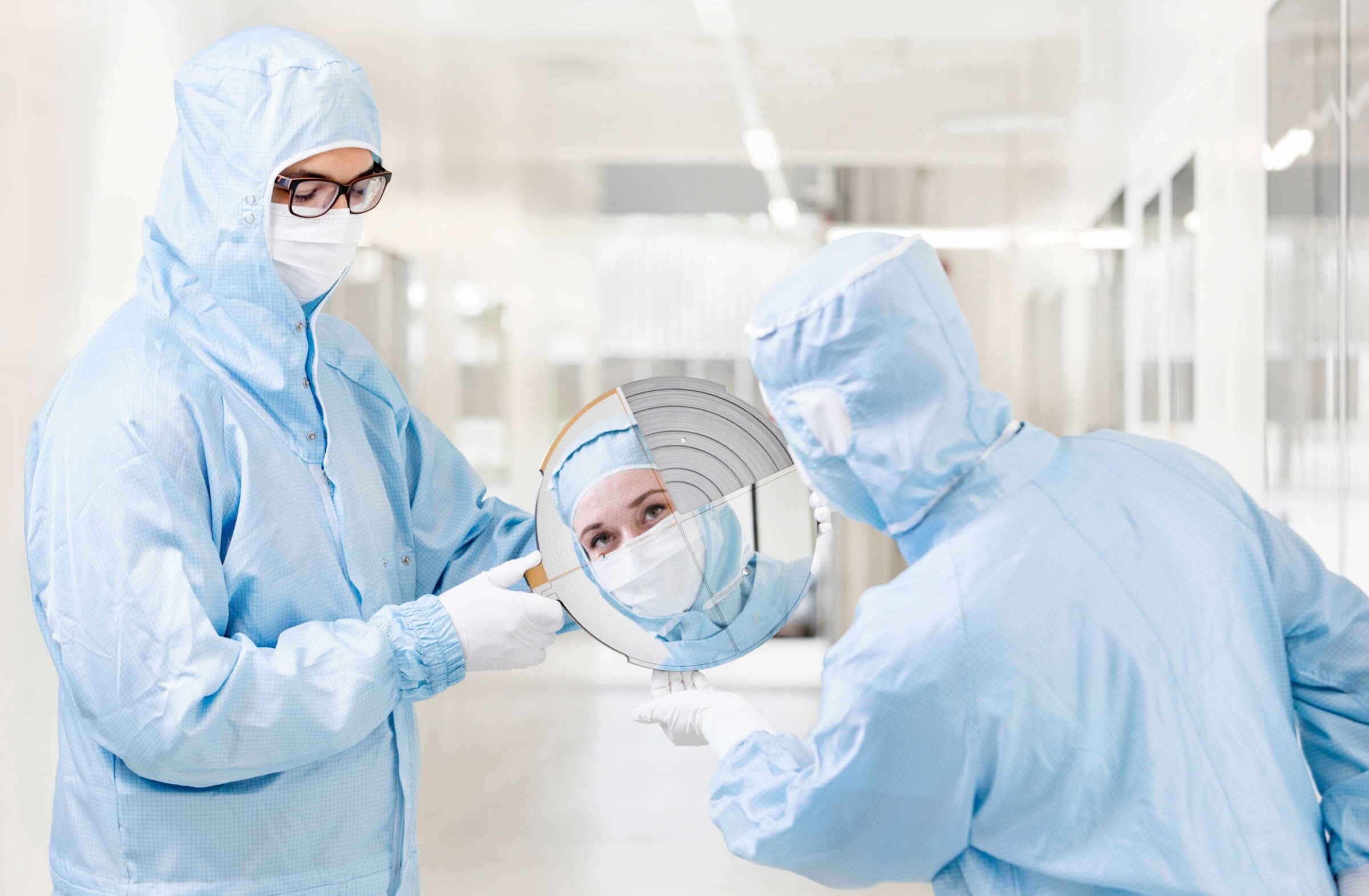 Since glass is very hard and brittle, handling this material requires a certain amount of care. Therefore, point loads must be assessed with great precision in order to prevent cracking or breakage. In the various applications, the optical glasses used have to be gripped, carried, guided and moved. Using the new technology of wire eroding, a solid-state joint was developed with a surface finish of Ra 0.3 and an absolutely smooth, quasi-ground mounting surface. This means that there is no point load for a sufficiently dimensioned surface. To prevent tilting and to achieve the required adaptability in the form of mobility and suspension, two tiny grooves with an offset of 90 degrees were eroded into the cylinder. There is no need for deburring, because eroding always delivers precise and sharp-edged results without burrs. 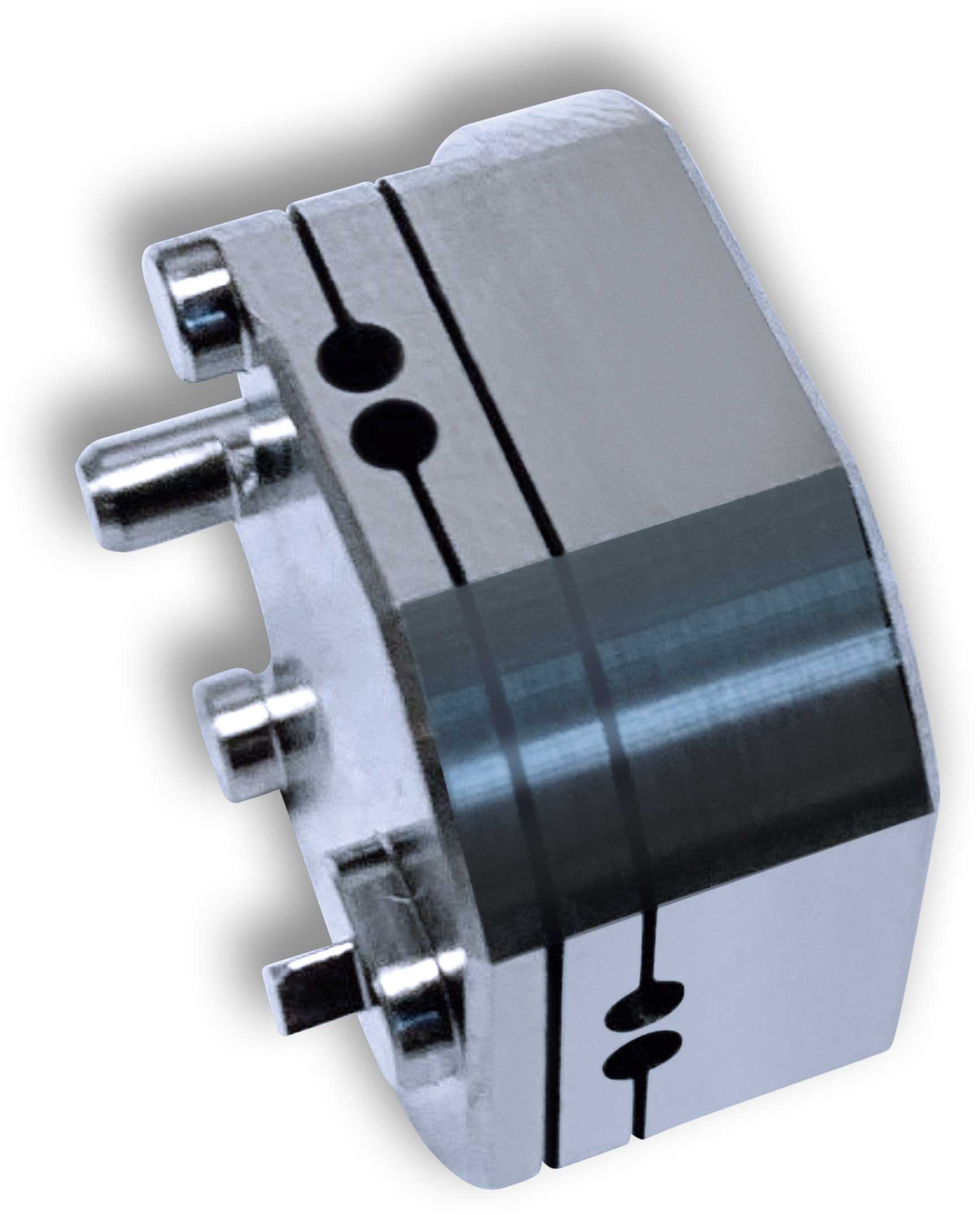 The brittleness of ceramics is not unproblematic – when drilling through holes for example. This is because the material tends to splinter at the end of a hole, which is often the case when the walls are not strong enough. The tests performed especially with silicon carbide using wire EDM were flawless.

“I’m glad we chose the large machine. In the meantime, we’ve been given the task of making the handling of a curved and relatively solid stainless steel holder for coating parts easier. Conventional machining with complex clamping and high vibration during milling is no longer necessary. With wire eroding, the required material removal has proved highly effective,” says Martin Garske summing up, adding: “We’ve so far come no way near exhausting the machine’s possibilities and are convinced that this technology offers us huge potential for performing future tasks. Wire EDM enables us to significantly simplify manufacturing processes and improve product quality, inclusive of high dimensional accuracy.”

In 1952, Dr Herbert Kubatz’s father founded Berliner Glas as an architectural glazing company with affiliated glass wholesaling. The company launched the mass production of diapositive or slide glass in 1955. This was joined by microscope slides for medical examinations. When the present owner Dr Herbert Kubatz joined the company in the 1960s, a Technical Glass processing department was set up. The company succeeded in attracting more exacting customers. As a result, technical glass from Berliner Glas was used in photocopiers, fax machines, overhead projectors and LCD displays. The transition to precision optics took place in the 1970s. High-quality optical components such as lenses, prisms and plane surfaces were produced. Business with semiconductors grew steadily in the 1990s. The company also expanded into the USA. After the turn of the millennium, the company moved into the display industry, measurement, laser and medical technology and made inroads into the space industry. Having taken over SwissOptic AG among others, another milestone was passed in 2006 with the founding of Berliner Glas SwissOptic Wuhan in China. 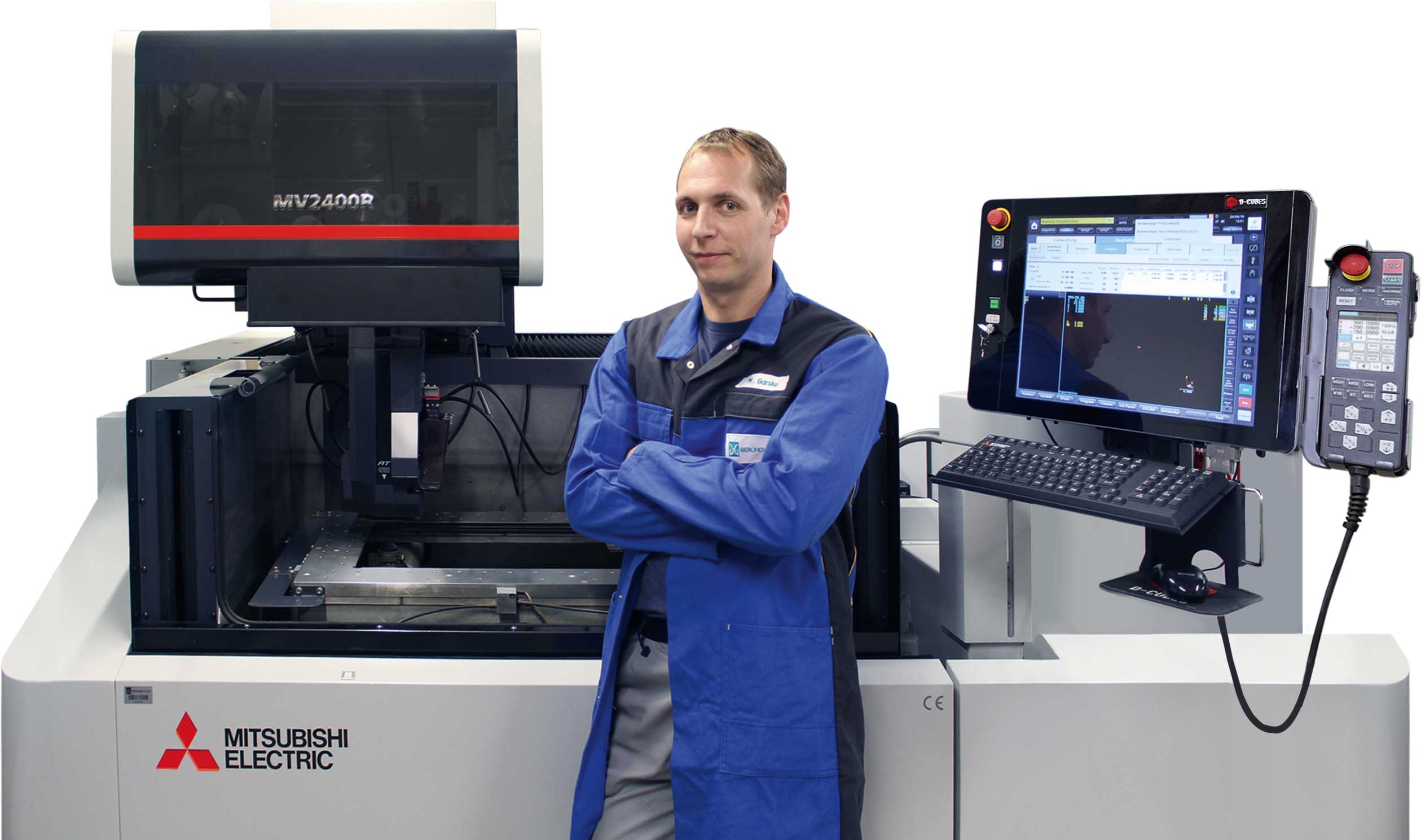 Today, the Berliner Glas Group supplies market leaders in selected branches of the light-using industry. Together with their customers, the companies of the Berliner Glas Group develop innovative optical solutions and bring them to series maturity. The key components, assemblies and systems from Berliner Glas make light usable for high-tech applications and can be found in many areas and technical systems: in machines for manufacturing computer chips and OLED displays for smartphones and tablets, in satellite systems that handle communication in space, and in medical devices. For the manufacturers of these machines, Berliner Glas acts as a long-term provider of solutions – from the idea through to series production.

What kind of training do you have?
After my apprenticeship as a machinist, I continued my training in 2009 as a master metalworker.
What qualities do you bring to your job?
Commitment, ambition and a grasp of technical things.
How did you earn your first money?
On a paper round while still at school.
What’s your motivation?
Here I follow Philip Rosenthal’s quote: “If you stop getting better, you stop being good.”
What do you like most about your job?
The constantly changing tasks and the preoccupation with new technologies.
How do you recharge your batteries outside work?
With my varied sporting activities and of course by spending time with my family. 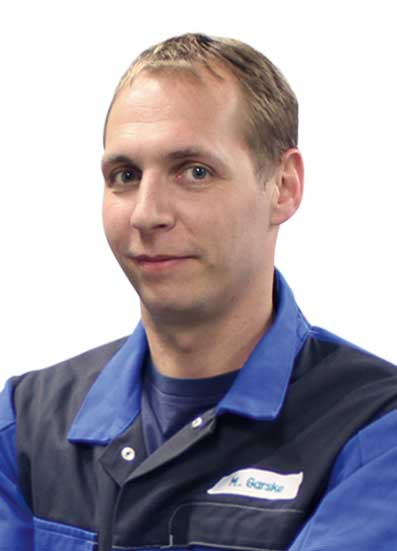