Full of the joys of springs

There is hardly a vehicle in Germany that does not have springs from Hirsch KG fitted in it. But this does not mean that they are standard products. For a spring has to be designed precisely for the conditions in which it is used. This calls for plenty of ingenuity in its development – and the utmost precision during its production.

Full of the joys of springs

There is hardly a vehicle in Germany that does not have springs from Hirsch KG fitted in it. But this does not mean that they are standard products. For a spring has to be designed precisely for the conditions in which it is used. This calls for plenty of ingenuity in its development – and the utmost precision during its production.

Be they in ballpoint pens, car seats, picture frames or pressure sensors, springs play an important role in every branch of industry. And each spring has to be designed for its specific application. “A spring is very often the final part in a design and there’s only a certain place available for it. Many users find it difficult to estimate the force that such a spring has to withstand and how much space it needs,” says Gerald Fischer, responsible for toolmaking at Hirsch KG. “Designing the spring precisely for these conditions calls for a lot of thought and creativity.”

The company in Marktredwitz outputs over 200 million springs each year. But it is not so much the number as the diversity that is impressive, as the company now has over 40,000 different springs in its product range. “We also produce one-offs. For truly special cases we even have a fabrication department where springs are bent by hand – we still cultivate this craft today,” Fischer explains. The spectrum ranges from compression and tension springs to torsion springs and leaf springs in all shapes and strengths. Even surface treatment to extend service life is possible. Another main source of business is bent wire parts and CNC turned parts. For particularly tricky jobs, internal research projects for the construction of machines and tools are regularly performed and cooperation projects launched, e.g. with Kempten University of Applied Sciences.

The company is particularly proud of its latest product, the HiSo® eyelet. On a tension spring, the eyelets are usually the weakest point. As a rule of thumb, the eyelets can be assumed to withstand 70 per cent of the spring body’s maximum load. Dynamic applications reduce this value by roughly a further 30 per cent. With a stroke of design ingenuity, this eyelet has now been designed so that the main forces act on the spring. The cost of production has been kept virtually unchanged, and the weight per spring has been reduced. “We’ve registered the HiSo® eyelet for patenting – there’s been a huge response to it,” Fischer explains.

The MV2400S is always used when extra-fine contours are required.

No less varied than the shapes and designs of the springs are the customers of the family business, spread among all sectors of industry, from wind turbines and the automotive industry to electronics and medical technology. “Sometimes we don’t even know exactly where the spring ends up,” says Fischer. What they all have in common is that the standards of quality and flexibility have risen enormously in the last five years. “We’ve always been known for our swift response and speed, but one can tell that the world is now spinning faster,” Fischer continues. And toolmaking has to keep pace with these demands. Planning and production therefore proceed hand in glove. In the context of process-controlled development, the necessary tools are designed and fabricated in the company’s own toolshop. In tool design, advanced software like CAD and Inventor from Autodesk and FEM-based calculations are employed. 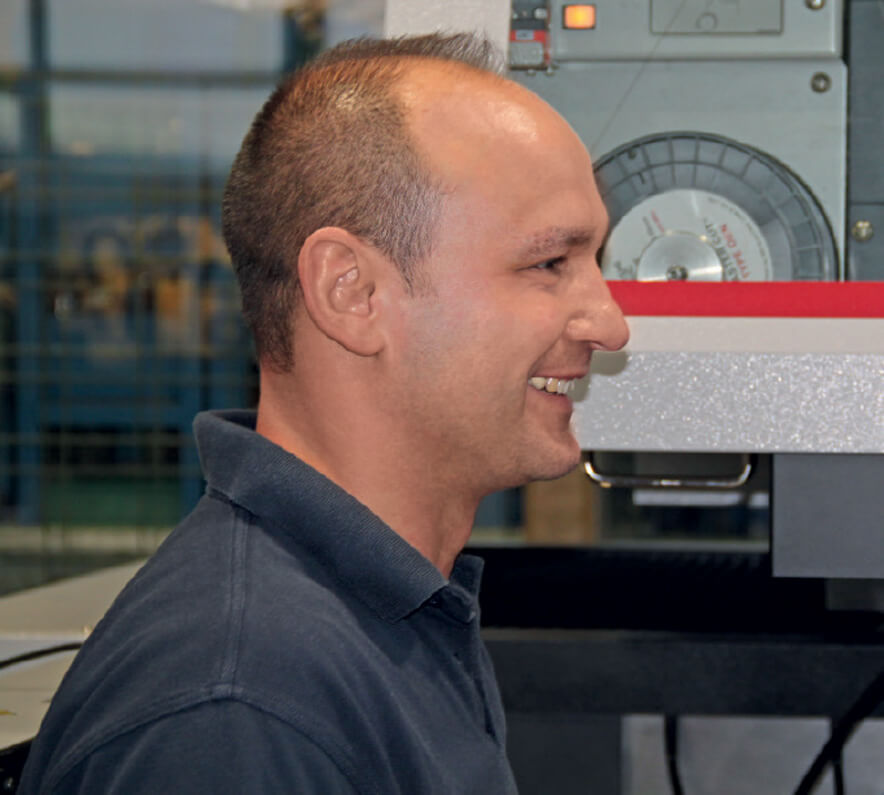 Gerald Fischer is delighted with the precision of workpiece machining.

“Stoppages due to the build-up of wire have been virtually banished.”

Pride and joy of the machine park

Fischer’s department produces about 400 tools per year, and it takes about four weeks for a tool to reach mass-production maturity. In addition to grinding and milling machines, there are four EDM machines – the MV2400S has been the pride and joy of the machine park since March 2013. “We’ve been working with EDM for more than 20 years, but this is our first time with Mitsubishi Electric,” Fischer candidly admits. “Until now we haven’t needed the huge functionality of Mitsubishi Electric machines, so we didn’t give them any attention.” But since the launch of the new MV Series in 2013, the situation has changed fundamentally.

The MV Series offers customers with modest purchasing budgets the high productivity, quality and flexibility previously the preserve of high-end machines. What is more, the accuracy required in toolmaking has risen considerably in the last few years, particularly in terms of surface roughness, geometric variation and tolerances. “With the wire cutting machines from Mitsubishi Electric, a die can be accurately processed to the nearest 5,000th of a millimetre – we now need this for the fine contours of our tools.” Whereas further surface treatments used to be necessary in some cases, cutting is now so accurate that they can be omitted. But not only the tools benefit from higher accuracy, but also the springs made with them show fewer surface blemishes owing to the better surface quality of the tools. But this wasn’t the only factor: “We were impressed not only by the technology, but also by the economics. Owing to the machine’s superior accuracy, we can now entirely leave out a process step, that of glass bead blasting,” says Fischer outlining the reasons for his choice.

The control makes all the difference

The machine is now in operation for an average of 13 hours per day and thus has plenty to do. 90 percent of the tools produced are punching and bending tools, most of which are used in-house. 95 per cent of the parts are made of stainless steel, and the tensile strength is as high as 2,000 N/mm². The strip thickness ranges from 0.1 to 2.5 millimetres, and the strip widths from 3 to 100 millimetres. The MV2400S also runs at weekends without having to be monitored. “If they have long contours, there’s always a risk of the wire accumulating and causing a short circuit. With Mitsubishi Electric, the wire chopper solved the problem to perfection. Stoppages due to the build-up of wire have been virtually banished,” says Fischer reporting from experience. He and his workmates are also impressed by the simplicity of operation. Since they were entirely new to Mitsubishi Electric machines, they were surprised how little time learning the ropes took. “The control was an important reason for purchasing the machine, as some of our operators had had over 20 years of experience on the old machine and we wanted as smooth a changeover as possible.” But the caution was unwarranted. “The layout of the control is brilliant,” says an enthusiastic Fabian Kohel who works at the Mitsubishi Electric machine on a daily basis. “Just two mouse-clicks and you’re ready to go – this is new compared to our old machines. And operation is so intuitive that we felt comfortable with the program after just two or three days.” The ergonomics of loading the machine table went down particularly well. “We sometimes have to push 20 kilo blocks in, and this is where the ergonomics makes a positive impression,” Kohel confirms. 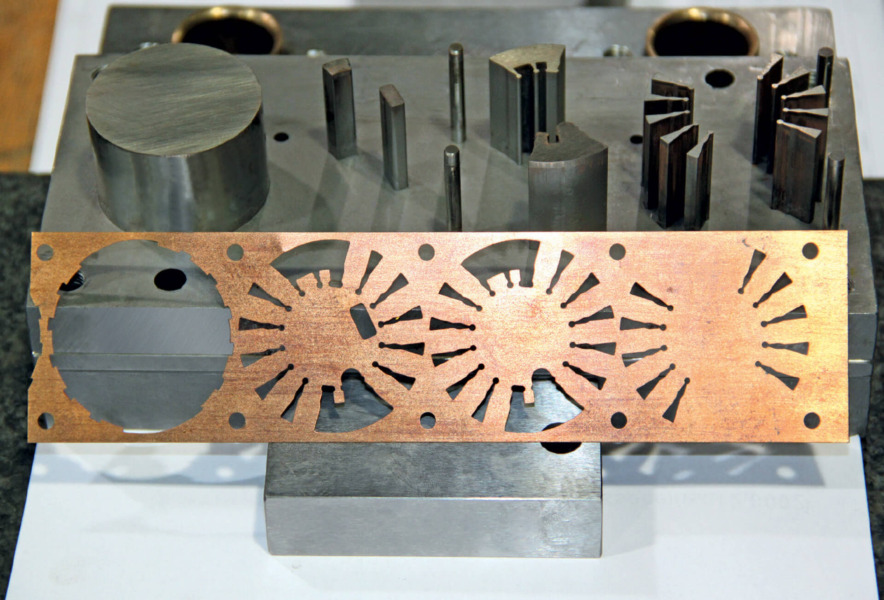 The tool (in the background) for the finer contours of a phosphor bronze component that later has to be coiled and installed in a pressure sensor. 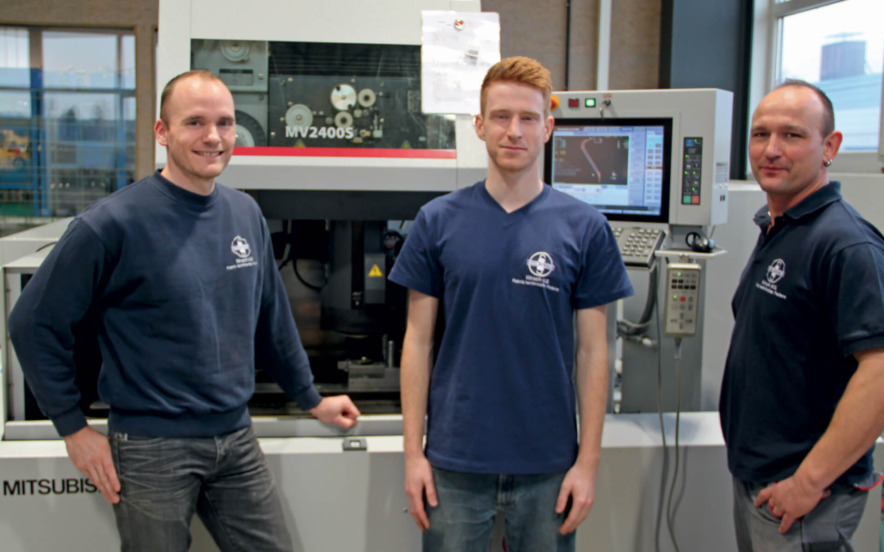 No losing the thread

Even after a year in operation, the wire threader has not lost anything of its fascination. The wire is heated and stretched in the process, which yields a barely perceptible but sufficient reduction in the diameter. Then a water jet is directed at the lower machine head (30 centimetres further down) that is a few millimetres larger than the wire diameter and threads the wire. Digital motors feed the wire forward, with the process undergoing continuous monitoring. “To be honest, I was sceptical at first, which is why I closely inspected the system and tested it exhaustively in Ratingen,” says Fischer. But the system for automatic threading of the cutting wire has impressed him not only on the test set-up, but also now in practice and particularly at high speeds and on large blocks.

It was not only during commissioning that the company felt well taken care of by Mitsubishi Electric. Fischer and Kohel are unanimous that questions are always competently and quickly answered on the spot by the hotline, “although we will only be able to give a definitive verdict after five years when supplies of replacement parts have gone into the equation.” However, since going into action, the machine has been running without a hitch – and there’s so far been no need to squander a thought on replacement parts. 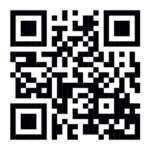 How did you earn your first money?
As a school kid I played the church organ and earned my first money; later music stayed an important source of income for a long time.
What is your source of motivation?
There is always something to improve or new challenges to master.
What’s different about how you do things now, compared to five years ago?
I personally don’t do much differently, but the demands have increased remarkably in the last few years – for instance in terms of speed, perfor­mance and documentation. It’s up to us to respond accordingly of course – and we’ve done just that.
Where do you see your company in five years’ time?
We want to increase our market shares. An important part will be played by our new HiSo® eyelet that really helps customers to cut their costs and improve their quality.
What’s your favourite way to relax?
Like our springs – by returning to a state of rest.
What attributes do you value most in other people?
Fairness, honesty and a good team.
If you were asked what you do by a friend with no technical knowledge, how would you explain your work in a single sentence?
Bending wire and strip the way the customer wants it. 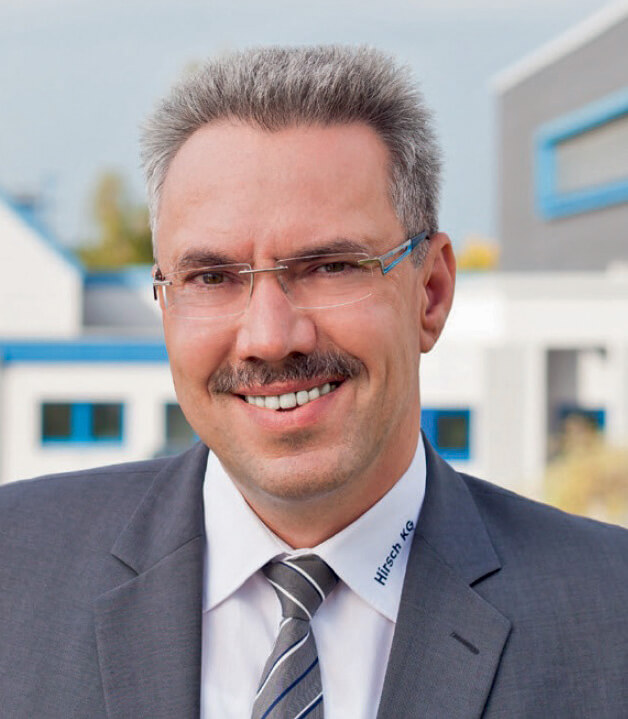