In all vehicles, propeller and half shafts transmit the power from the ­gearbox to the drive axle and drive wheels. The basic principle of flexible torque ­transmission has been known for about 500 years and has been perfected by the automotive industry for modern power trains. The IFA Group with its head ­office in Haldensleben is a component supplier to all major car makers. It is one of the world’s market leaders. Over 2.5 million prop shafts leave the company every year. 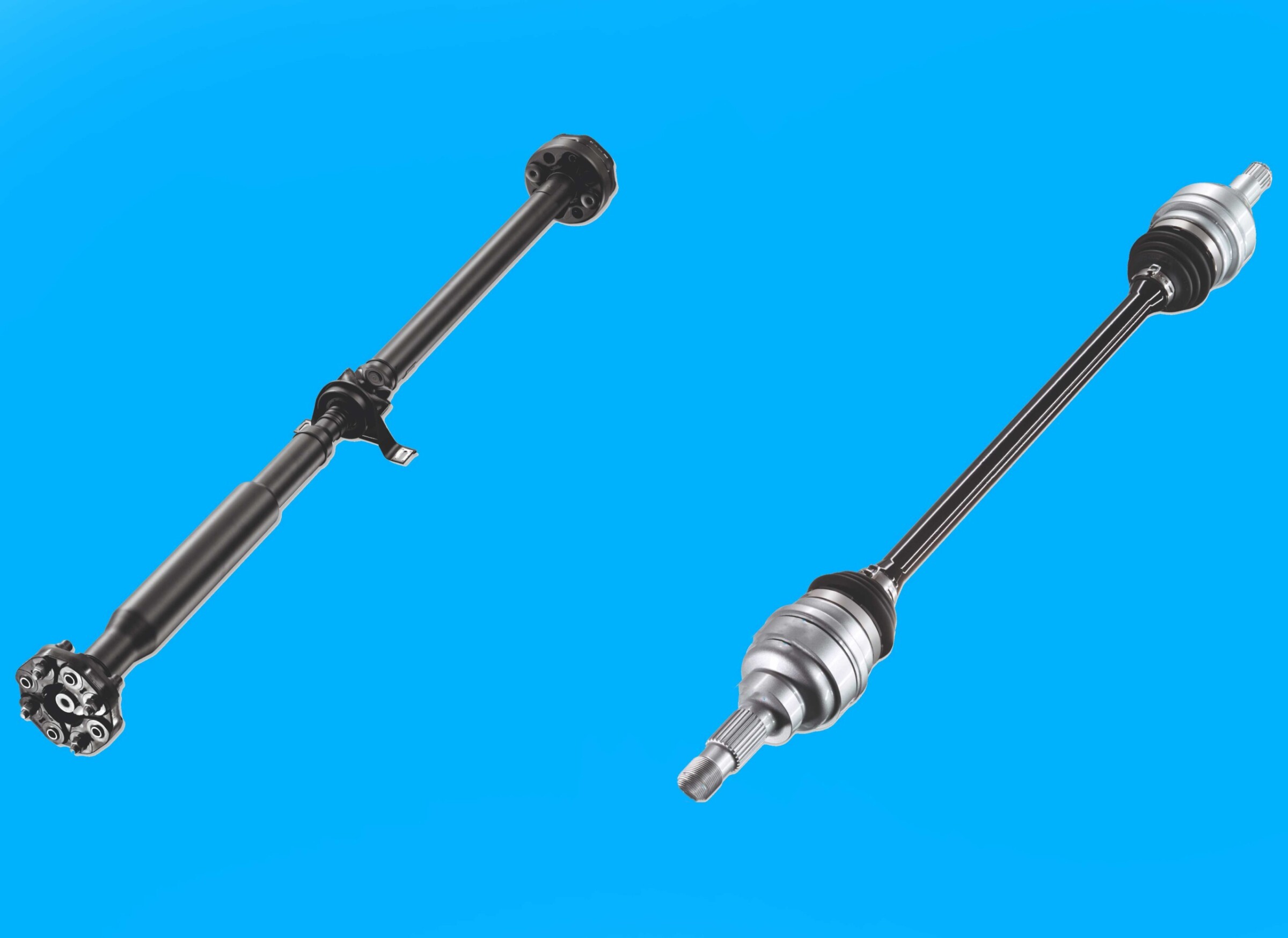 In all vehicles, propeller and half shafts transmit the power from the ­gearbox to the drive axle and drive wheels. The basic principle of flexible torque ­transmission has been known for about 500 years and has been perfected by the automotive industry for modern power trains. The IFA Group with its head ­office in Haldensleben is a component supplier to all major car makers. It is one of the world’s market leaders. Over 2.5 million prop shafts leave the company every year. Electrical discharge machining is used in the ­production of samples. Internal splines can be produced with greater speed,­ ­flexibility and precision with the Mitsubishi Electric MV1200R than on existing series ­production systems.

The axle shaft is a power train ­element in vehicles that transmits the torque from the gearbox to the drive axles. In the car with front engine and rear drive as well as in four-wheel drive models, prop shafts are an absolute necessity. They are among the most heavily stressed components of the power train. In addition to rotation, they also have to absorb and compensate for shifts in power transmission in the moving vehicle.

High accuracy even on difficult contours

Its basic principle has been known and trusted for 500 years. Today, shafts are high-tech components whose manufacture calls for a great deal of expertise, experience and innovative solutions. Each vehicle type and each system platform ­requires specially adapted shafts tailored precisely to the vehicle’s performance and its ­installation location in the vehicle. For this ­reason, the shafts of trucks, ­agricultural machinery, construction machinery and cars have entirely different requirements. However, the expectations of all customers are the same on one point: they want high-grade shafts that will perform reliably, failure-free and with ­little noise over a long period of time. 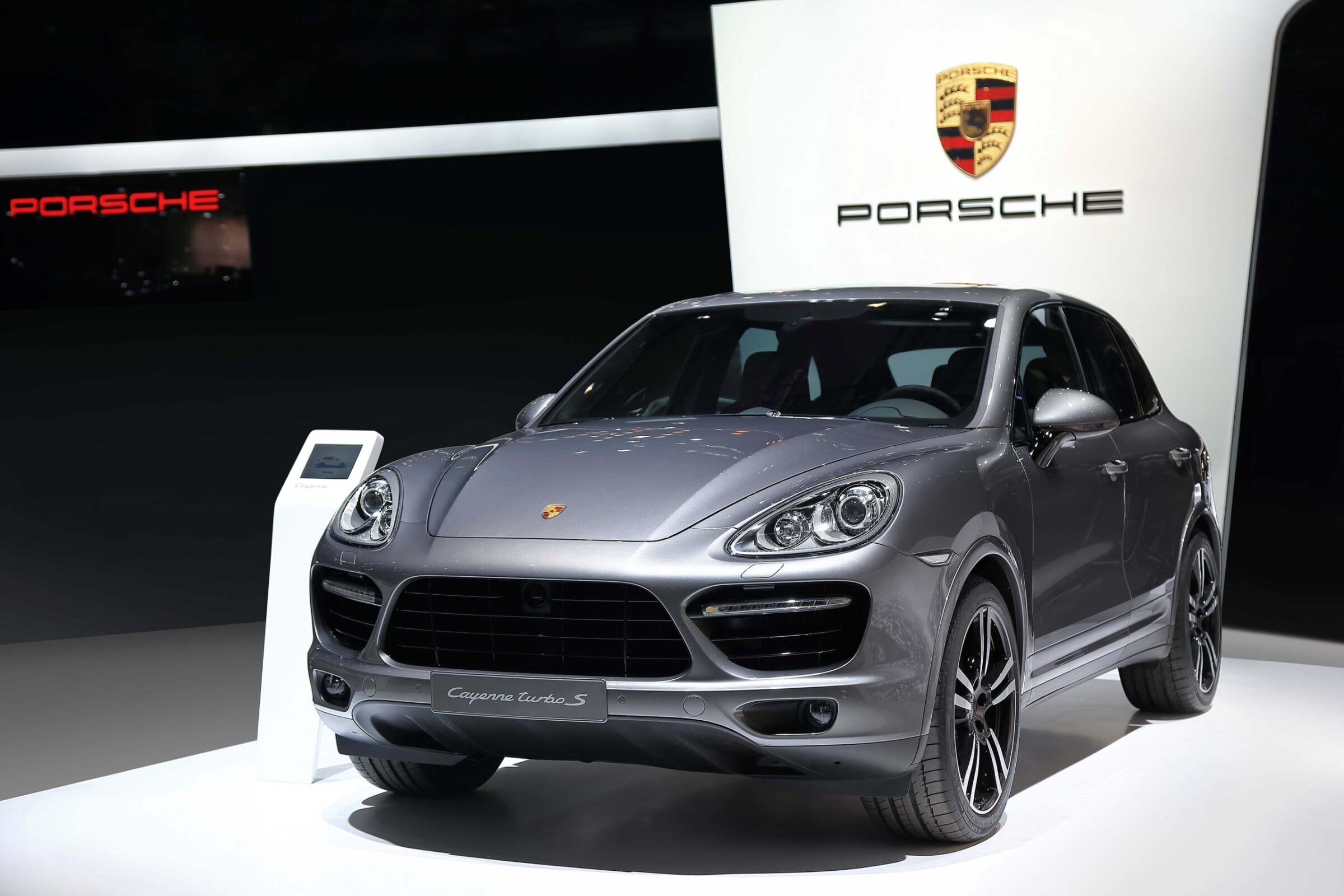 For the Porsche Cayenne, IFA Powertrain has developed and produces the world’s most complex propeller shaft.

One of Europe’s leading makers of prop shafts is the IFA Group with its headquarters in Haldensleben north of Magdeburg. With annual growth of over 10 per cent, the company today ranks among the world market leaders in its sector. One of the guarantees of the company’s success is its innovative power. Its developers have thus succeeded in significantly reducing the number of parts of the prop shaft and at the same time simplifying assembly with a plugged or pressed connection with the gearbox. 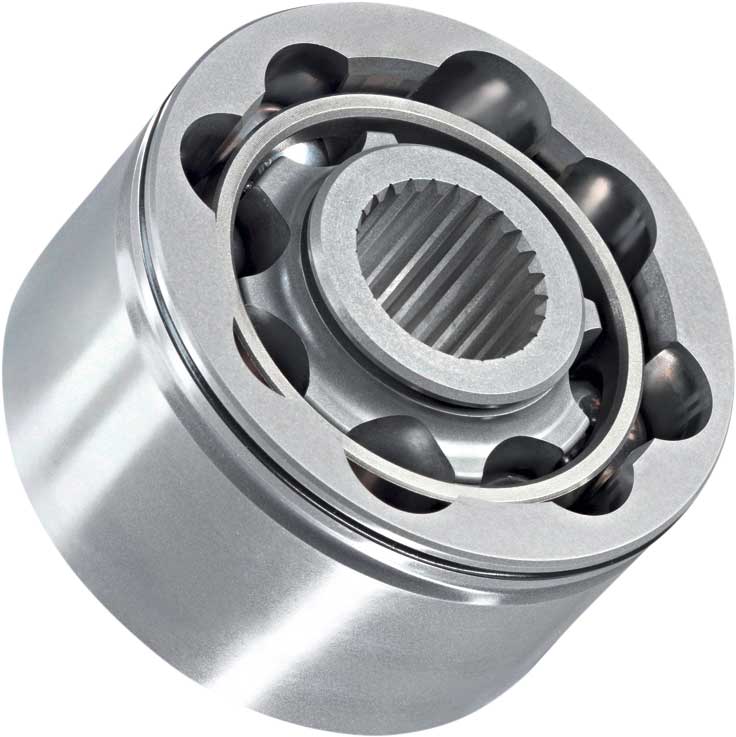 As a direct supplier to many ­reputable vehicle manufacturers, the company produces over 2.5 million prop shafts for rear-wheel and all-wheel drive models. Its customers include such big-name premium manufacturers as Porsche and Ferrari.

“Since a shaft can consist of up to 300 parts, a supposedly ­simple component needs a good deal of development work and ­expertise,” says sample production expert Thorsten Bartels. Since the privatisation of the ­nationalised company and its takeover by ­Heinrich von Nathusius, IFA has ­concentrated on the development and production of prop shafts, half shafts and joints for powered vehicles. The ­latter include cars, vans, trucks, and agricultural and construction machinery.

The automotive industry is highly appreciative not only of IFA’s ­production know-how. For whenever prop and half shafts are ­concerned, IFA’s experts are called upon. Although IFA usually receives a highly precise ­requirement profile with all the ­specifications from the customer, when a new series is in preparation, IFA’s ­experts are involved from a very early stage and then work closely with their clients.

The developers of the IFA Group consider electromobility to be one of the big challenges of ­tomorrow. It calls for different drive ­strategies, particularly for half shafts, i.e. short shafts that connect the electric motor with the wheel. Another ­important issue in vehicle engineering is weight reduction – but without compromising on power transmission, precision and durability. With its weight-reducing development breakthroughs using fibre composite ­materials, IFA is one of the pacemakers in this area as well. 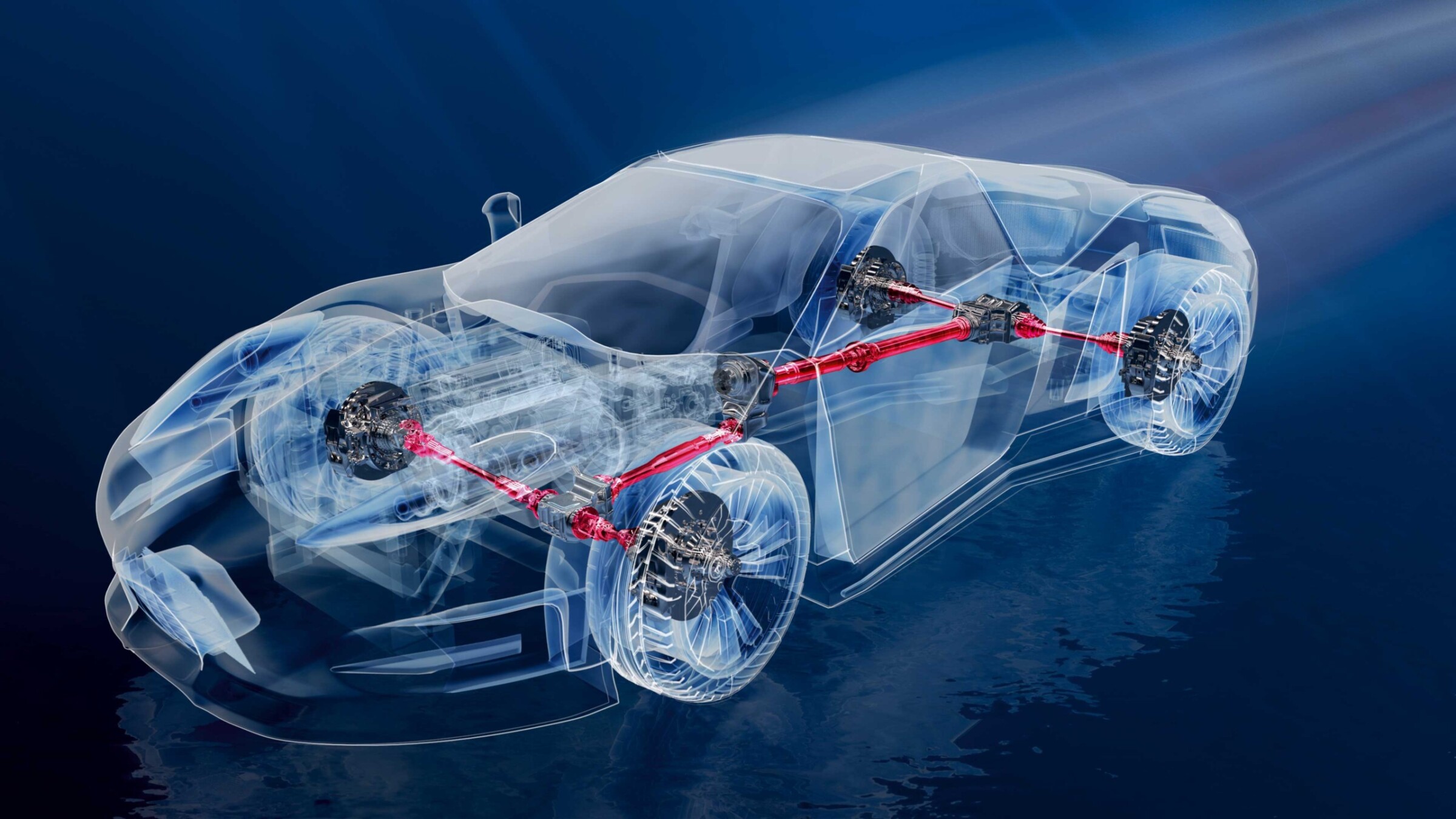 The development centres of the IFA Group s­pecialise in coupling shaft development and light-weight construction.

To machine high-grade spline joints, IFA introduced EDM in its own ­sample production department in 2016. “Until then, we had had our internal spline samples machined by external suppliers,” says Bartels, job scheduler in sample production.

Higher speed, efficiency and precision and lower costs in production

EDM is not suitable for high rates of output in production. When the initial drawings of a new ­shaft-hub joint start taking shape at the IFA Group’s development centre, the specialists in spline joints go into action. 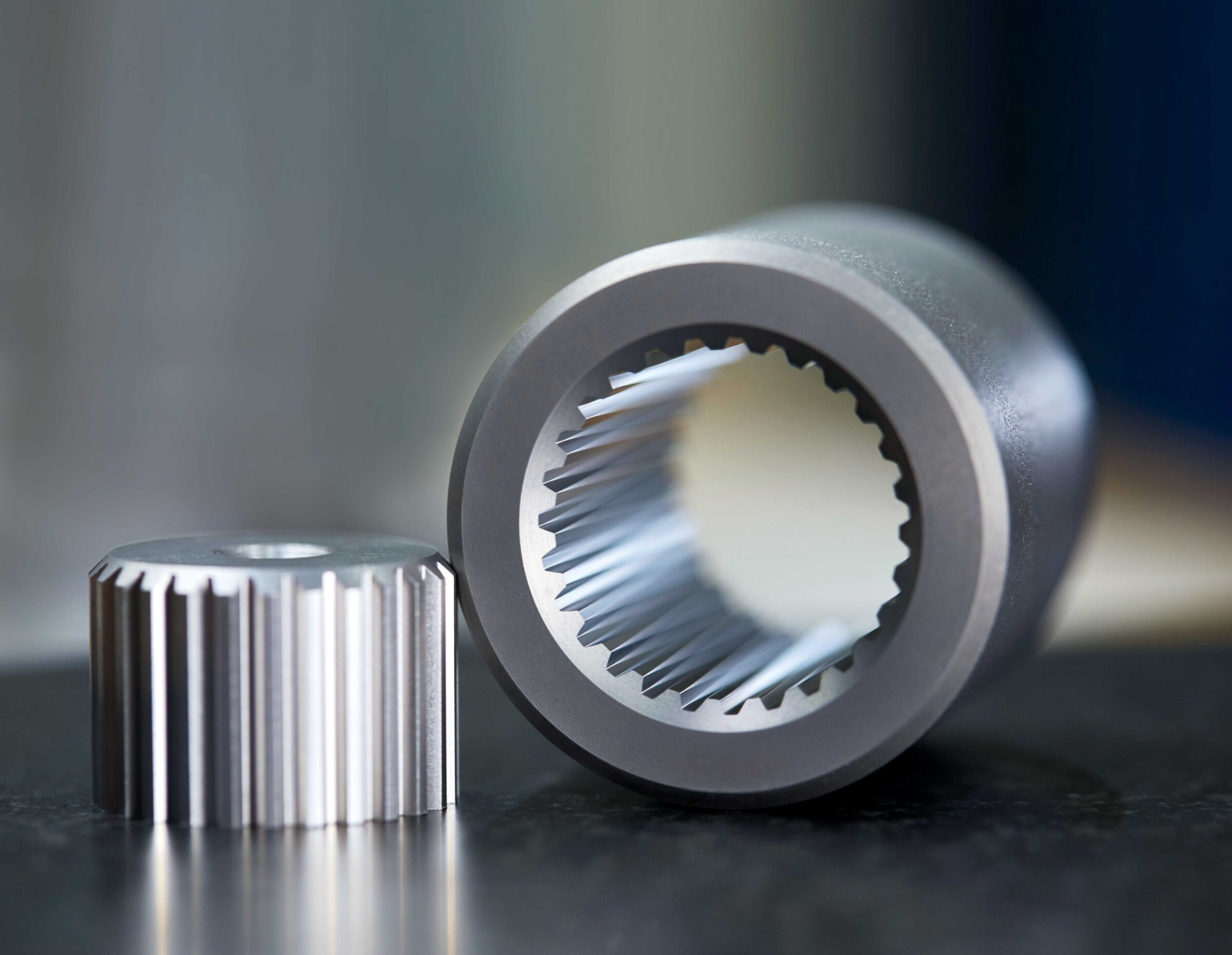 These spline samples for male and female splines are used by the IFA Group in internal tests and optimisations.

For this, the shaft is produced with external gearing and the hub with internal splines. External ­gearing is relatively easy to mill, while internal splines are machined much more ­effectively with EDM. “With the new ­Mitsubishi Electric MV1200R, we’ve become more flexible in ­sample ­construction. Thanks to professional support from ­production service provider Eropräzisa, we have been able to produce numerous other parts by exploiting a ­technology that was new to us. Today, a year on, we are wire-cutting a ­multitude of ­components, including initial ­samples of joint components or items of equipment for sample construction and mass ­production. The machine’s workload in ­two-shift operation is high. By ­using the ­program start features, the ­machine is programmed and loaded with ­long-running jobs, so it can start and run unsupervised at night, for example. This means we can take out the finished sample parts at the ­beginning of the morning shift,” says Bartels. 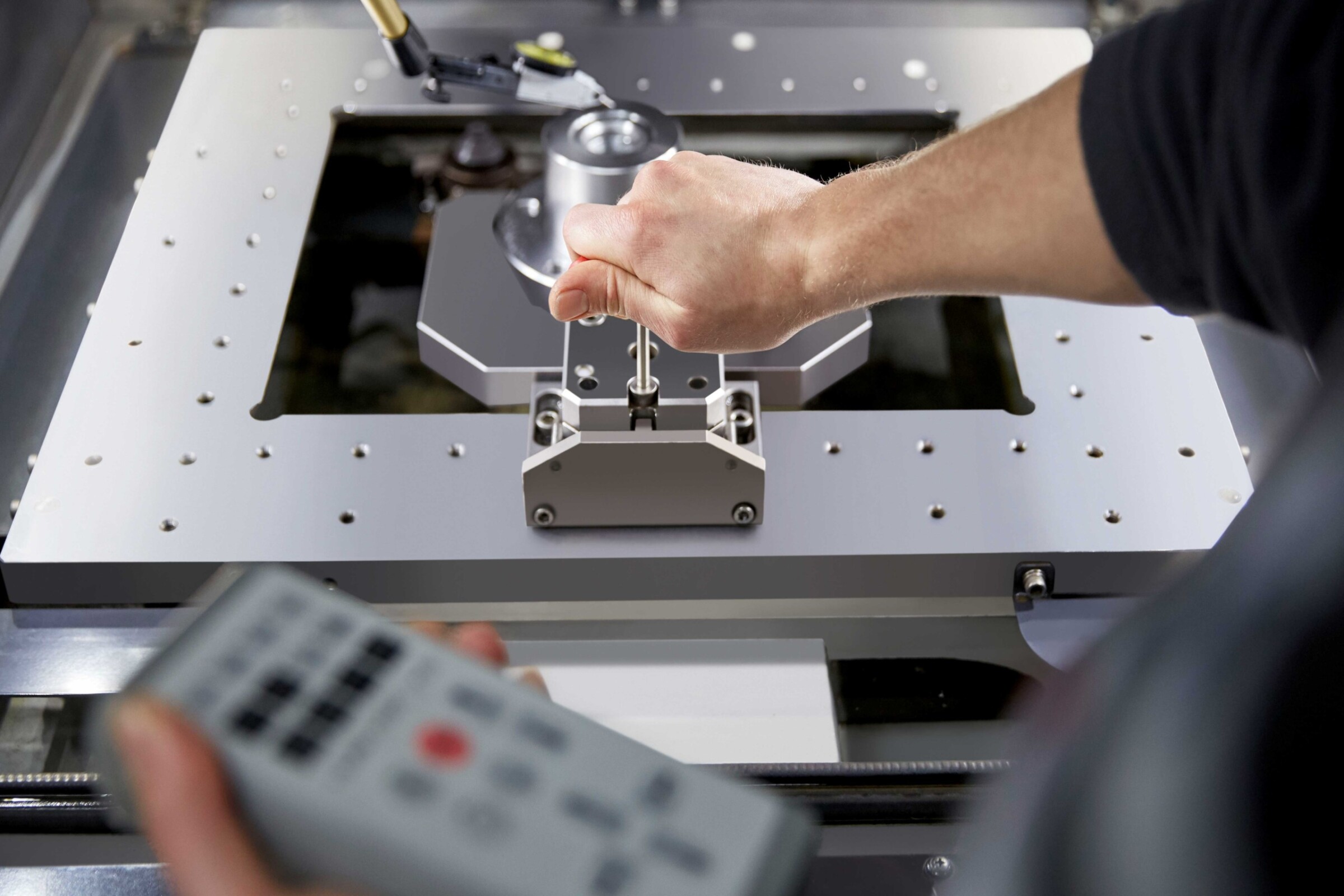 Setting up workpieces outside the machine and loading them with quick-action chucks = boosting efficiency.

Introduction of a new machining method

When Thorsten Bartels and ­Christoph Haverland embarked on introducing EDM to sample ­production at the IFA Group, they had a definite goal. They wanted to produce spline joints at the development stage with greater speed, efficiency and precision and also less expensively. Exhaustive test cuts with EDM systems from ­different manufacturers soon revealed that EDM technology represents a ­practicable and beneficial way of achieving the desired quality in the production of internal splines.

“At the test stage,” Bartels ­recalls, “we came into contact with our ­current partner Eropräzisa which has served and ­advised us ­perfectly to the present day. ­During the ­introduction of a ­technology new to us, it soon became ­obvious to us that if we want to achieve our goal quickly, we need someone who not only sells us a machine, but also assists us ­practically with ­expertise.” “EDM is a ­totally new technology that ­cannot be ­compared with other ­machining methods,” Steve Schmeier of Eropräzisa adds. “As a beginner, you can book a one-week basic course as well as advanced training. However, novices need continuous support over a ­prolonged period.  Our customers come with specific needs from their ­production ­activities and we meet these needs in cooperation with them. With ­targeted technology transfer, we ­ensure that employees are quickly familiarised with the new technology and that the machines work perfectly.”

Core business:
Direct supplier of front and rear prop shafts and of components for cars and light commercial vehicles