By switching to a custom wire EDM system from Mitsubishi Electric, Steinkamp Maschinenbau, maker of tools, moulds and special-purpose machines, is now a true “high-wire artist”. 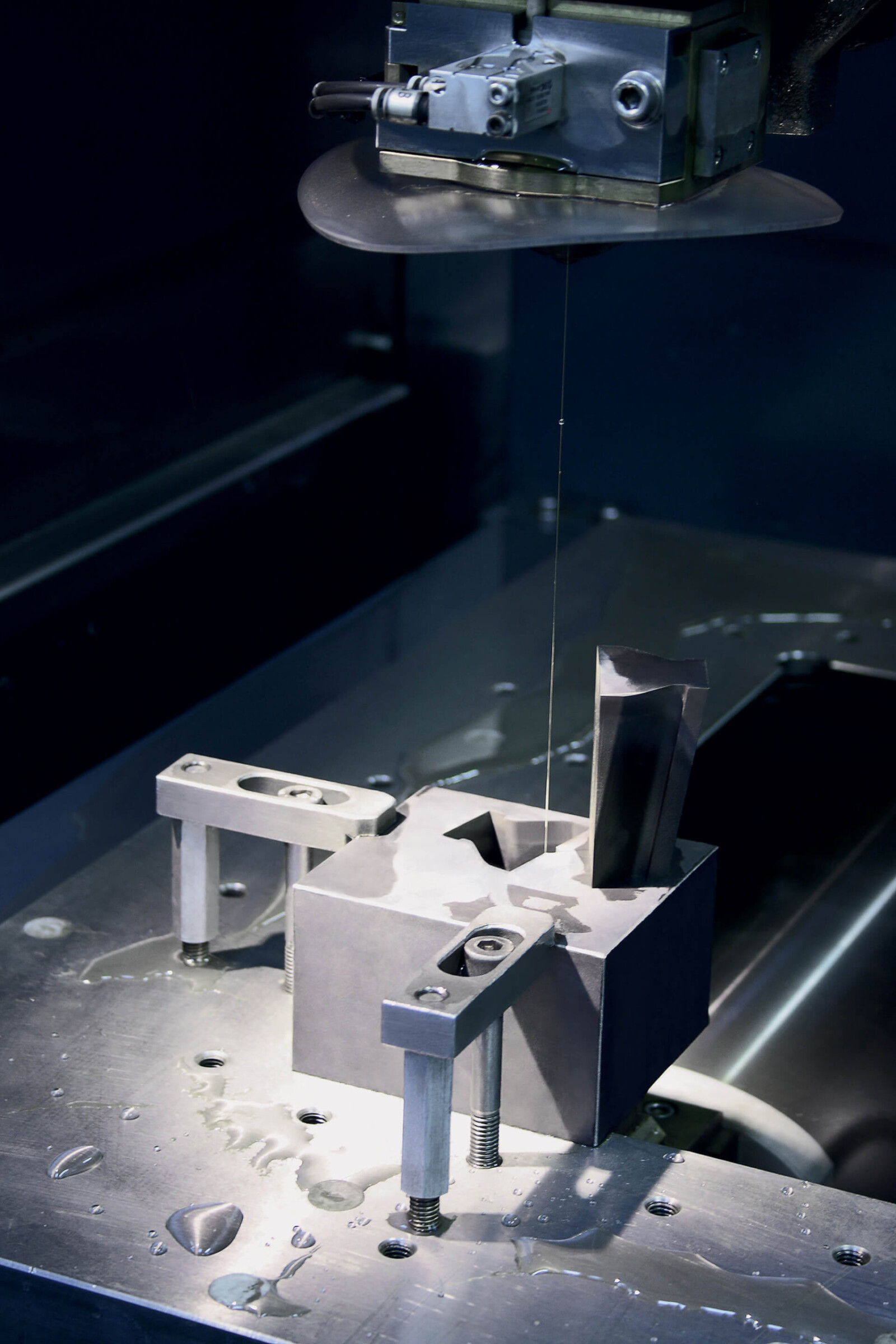 By switching to a custom wire EDM system from Mitsubishi Electric, Steinkamp Maschinenbau, maker of tools, moulds and special-purpose machines, is now a true “high-wire artist”.

The modern approach of Steinkamp Maschinenbau GmbH & Co. KG, Espelkamp, Germany, is expressed by the façade of the company building. On entering the building, the visitor is introduced to the company’s products, exhibited in a glass cabinet together with awards. In the office of Man­ag­ing Director Lars Steinkamp, the latest issues of , the Mitsubishi Electric customer mag­a­zine, area laid out on the table. However, Stein­kamp doesn’t regard this as a sign of his definitive commitment to his new supplier, as he’s only
been using his FA20-S Advance V wire EDM system since January 2012. “It’s early days yet for a conclusive verdict. The machine hasn’t been run­ning for long enough. What’s more, the machine operator still hasn’t completed his training.” However, Steinkamp reckons he’s moving in the right direction. “If the wire-cutting machine does everything that we expect of it and what it has shown so far, I can well imagine purchasing all future wire EDM machines from Mitsubishi Electric.”

The family business was founded by Ingolf Stein­kamp, father of today’s managing director, as a tool- and mouldmaking firm in Espelkamp in 1970. The firm with 110 employees now ranks among one of the key suppliers to the automotive industry. Word has even spread as far as the USA, where the company opened a branch in Erlanger, Kentucky, in 1999. Lars Steinkamp gives his reasons for the company’s success. “I attach great im­por­tance to good personal relations and, in our workforce consisting almost entirely of skilled staff, I encourage initiative.” This is no mere lip service, for he invites his team every now and then to joint celebrations and thus encourages identification with the company. 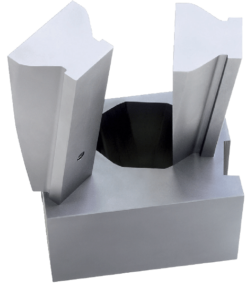 This component destined for a mould is one of the first components machined by Steinkamp on the FA20-S Advance V. 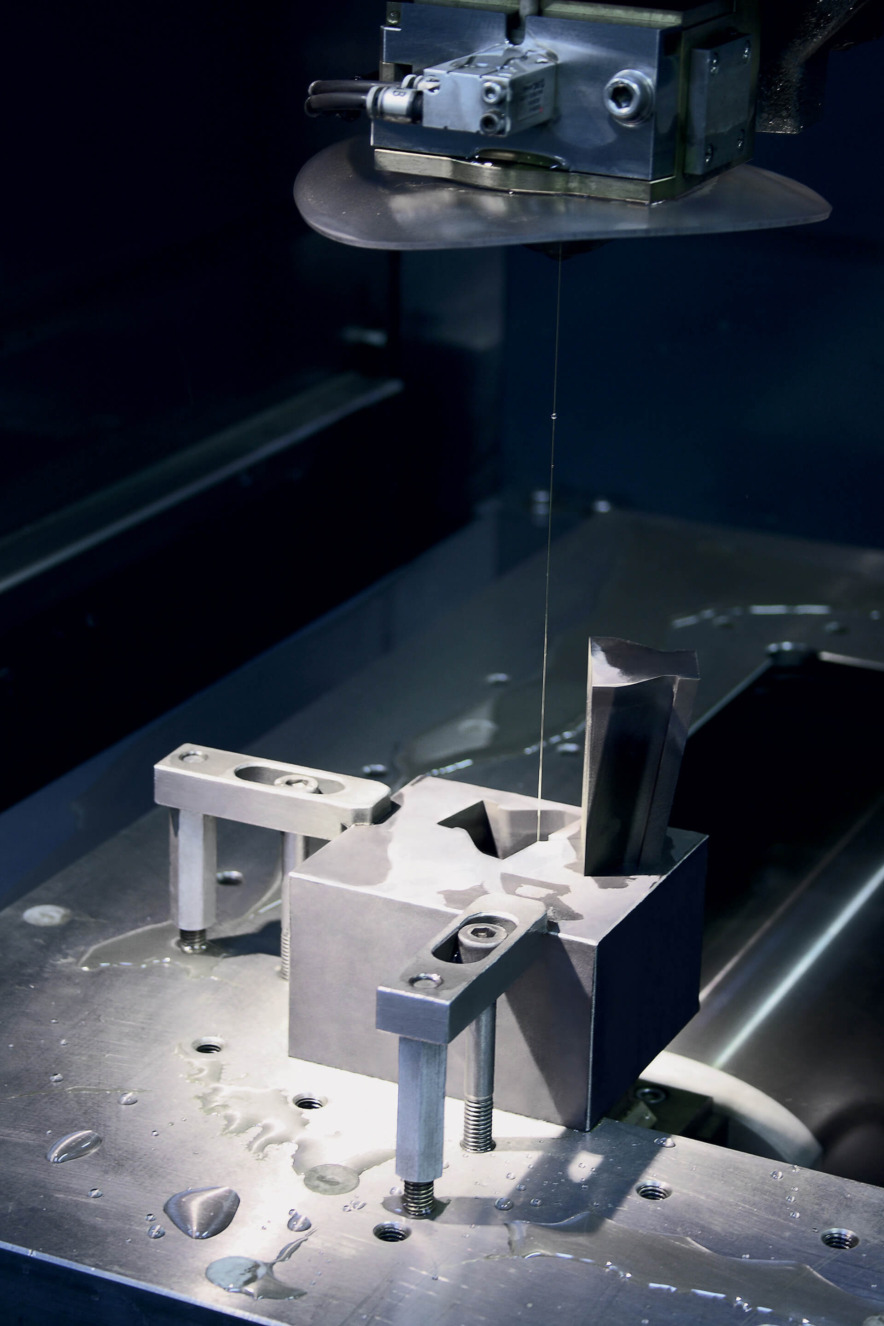 Steinkamp doesn’t want to miss out on unobstructed access to the work area or to water bath technology.

“The Mitsubishi system achieves much higher paral­lelism and pre­ci­­­sion than our older wire EDM ma­chines.”

This sense of belonging pays off. Sales of EUR 10.5 million in 2011 and orders in hand ensuring work for the next two and a half months are the proof. In addition to the German and American markets, Steinkamp has also achieved success in the UK, France, Italy and the Czech Republic. Business is booming in the USA, and production in Espelkamp is having to fabricate moulds for the American subsidiary for a transitional period. “We’re excellently equipped, have a huge machine park offering every conceivable technique, and are therefore hard to beat in terms of qual-i­ty and deadline compliance,” Stein­kamp stresses. “Our strategy
results in slightly higher prices, but it also boosts customer satisfaction. And that’s precisely what we mean by service.”

The company certified to DIN EN ISO 9001 since 1997 focus­es on the production of equipment for the auto­mo­­tive supply industry and main­ly for rubber-metal injection and blow moulding. Stein­kamp also produces entire special machines, which it also designs, builds, fur­nishes with CE markings and supports with ser­vice. These are joined by prototype construction and injection mouldmaking.

Delighted with the quality of the machine

In its job shop and prototype production, the company uses milling, turning, grinding, sinker and wire EDM machines. Lars Steinkamp goes to the Mitsubishi Electric wire EDM machine, whose Advance CNC control has a complex range of func-tions. “This is by far our youngest and most advanced wire-cutting machine – all the others are anything up to 25 years old.”

The components that Steinkamp wire-cuts are mainly components for injection and foam moulds. His customers more rarely order prototype com­ponents. The material is 95 per cent hardened and unhardened steel and small quantities of aluminium. The sizes are as much as 500 x 200 x 30 millimetres. Depending on the size and number of penetrations, the operator quotes machining times ranging from 25 minutes to 30 hours.

Heinrich Wiebe, in charge of EDM, shows us a component produced on the FA20-S Advance V. “I’m delighted with the quality. The Mitsubishi system achieves much higher parallelism and precision than our older wire EDM machines. With a wire diameter of 0.25 millimetres, we achieve surface quality to within 0.2 micrometres. Once we’ve learnt the ropes, we also expect much higher output from the new machine than from the old ones.”

The V package of the FA20-S Advance V operated in single shifts includes a high-performance generator that makes erosion rates of up to 500 square millimetres per minute possible. The high-speed XXL EDM system is a custom, “high-wire” version in this case. “Our machine has a cutting height of 420 millimetres and thus a suitably high flushing tank.” Wiebe lowers the door of the fluid tank. “We don’t want to miss out on unobstructed access to the work area – or water bath technology. Among our old machines, there’s even one with coaxial flushing.” Wiebe also draws attention to the auto-threading system that takes only ten seconds for the task; and to the 20 kilo wire station that has been installed in addition to the 10 kilo station supplied automatically with the machine.

At the machine terminal, Vitalij Marx, operator of the FA20-S Advance V, calls up the 3D drawing
of the component due next for machining. For Stein­kamp, the CAD drawing illustrates the complex­i­ty of certain parts. “To obtain the necessary EDM skills, you need to train as a fine mechanic or toolmaker. Because in mouldmaking you have to understand, among other things, the interplay of the finished components.” It is therefore es­sential that the company’s staff have a thorough grasp. The customer supplies them with a 3D model, which they process in the CAM system for EDM machining. 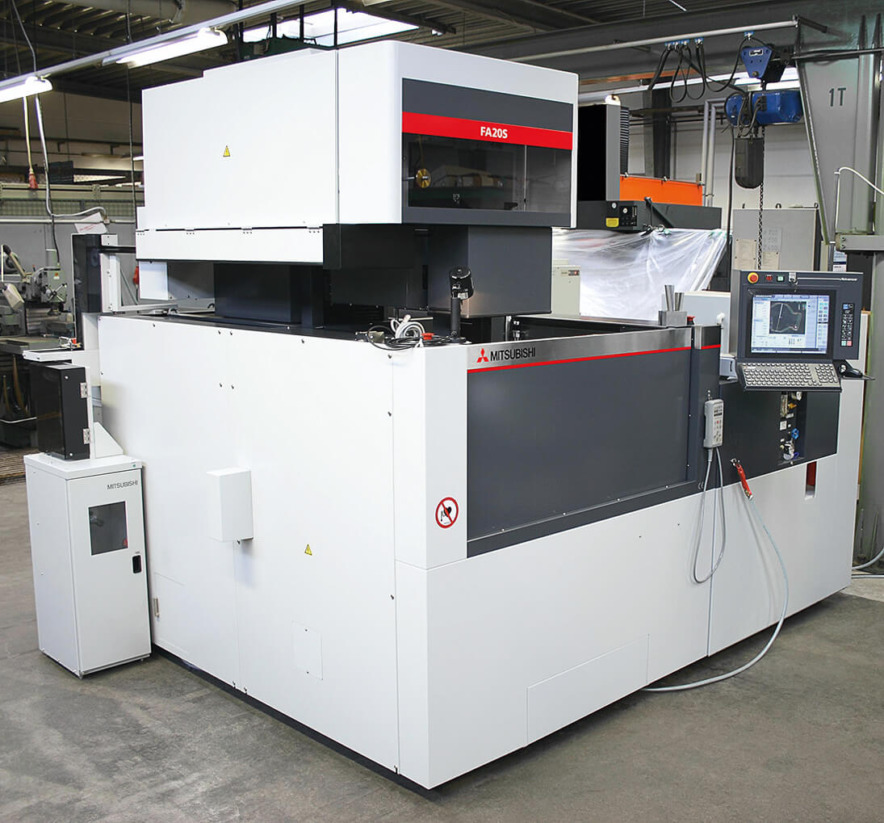 The FA20-S Advance V used by Steinkamp is a custom, “high-wire” version with a cutting height of 420 millimetres and a suitably high flushing tank. 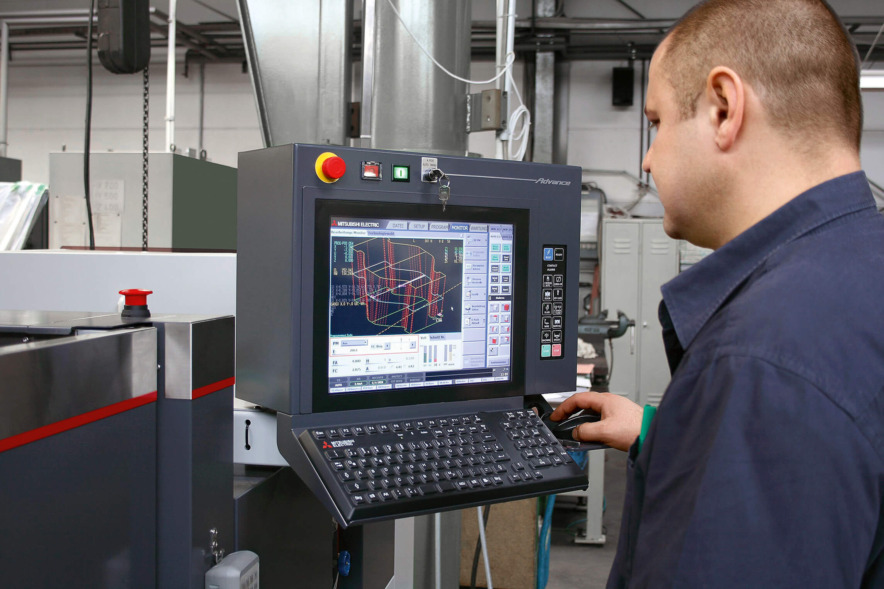 At the machine terminal, Vitalij Marx, operator of the FA20-S Advance V, calls up the 3D drawing of the com­- ponent due next for machining.

Steinkamp’s interest in wire erosion systems from Mitsubishi Electric was awakened by a neighbouring company that uses a machine from this manufacturer and was highly satisfied with it. The neighbour’s appreciation fell on fertile soil, and all the more so as Steinkamp was disappointed by his old supplier. When he then saw the FA20-S Advance V at a trade fair, he bought it straight off, encouraged by a trade fair discount. What’s more, the FA20-S Advance V was immediately available and therefore ready for use after only a month.

Despite the brevity of business relations so far, Stein­kamp can already look back on positive ex­pe­-
rience with Mitsubishi Electric. “The technician that installed the machine had all the requisite tech­-
nical knowledge, including that of the control equipment. This is by no means usual. And he performed all his tasks efficiently.”

“Sales of EUR 10.5 million in 2011 and orders in hand ensuring work for the next two and a half months.” 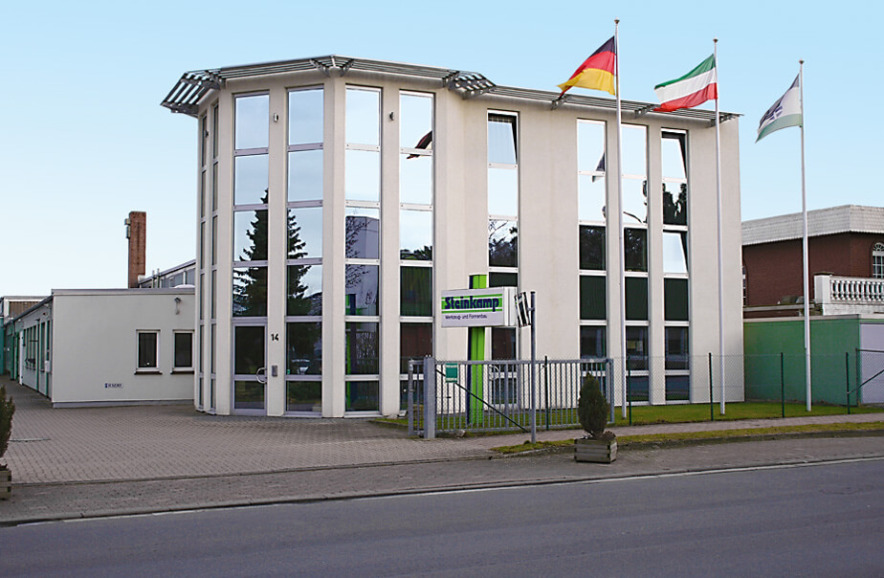 2017
A glance into the future: achieving higher output with fewer man hours

Please describe in a sentence what Steinkamp Maschinenbau GmbH & Co. KG does.
With our expertise, we serve as the extended work bench for our customers.
How did you earn your first money?
With a holiday job in my parents’ business.
What motivates you?
Most of all, what can be achieved by using high-grade machines. For this reason and to achieve high customer satisfaction, I provide my staff with a modern machine park, the latest software and hence the best working conditions.
What’s different about how you do things now, compared to five years ago?
We’ve gone in for automation and automated procedures in a big way and thus shortened set-up time considerably.
Where do you see your company in five years’ time?
I hope that we can continue to stabilise our position on the market and will be in an even better position than today. I’d like to achieve higher output with fewer man hours.
What was your biggest business success?
Surviving 2009 and making a strong recovery.
What’s your favourite way to relax?
Spending a quiet evening after work.
What attributes do you value most in other people?
Reliability and honesty.
How would you briefly describe your work to someone with no technical knowledge?
We get metal into shape with wire EDM, milling and turning. 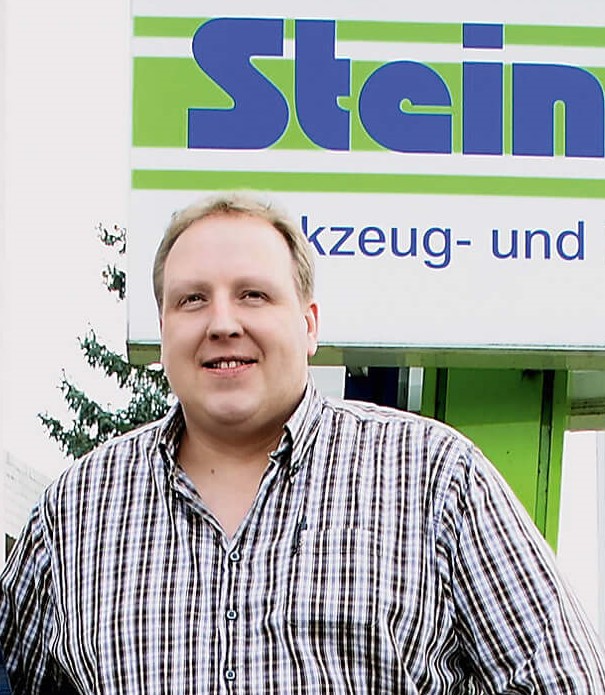