His own architect. Short ways are a must

Form follows function – this design principle is fully embraced by metalworking company Bacher GmbH in Upper Bavaria, not only in its products, but also at its newly built company headquarters. Participating in the firm’s success are EDM systems from Mitsubishi Electric. 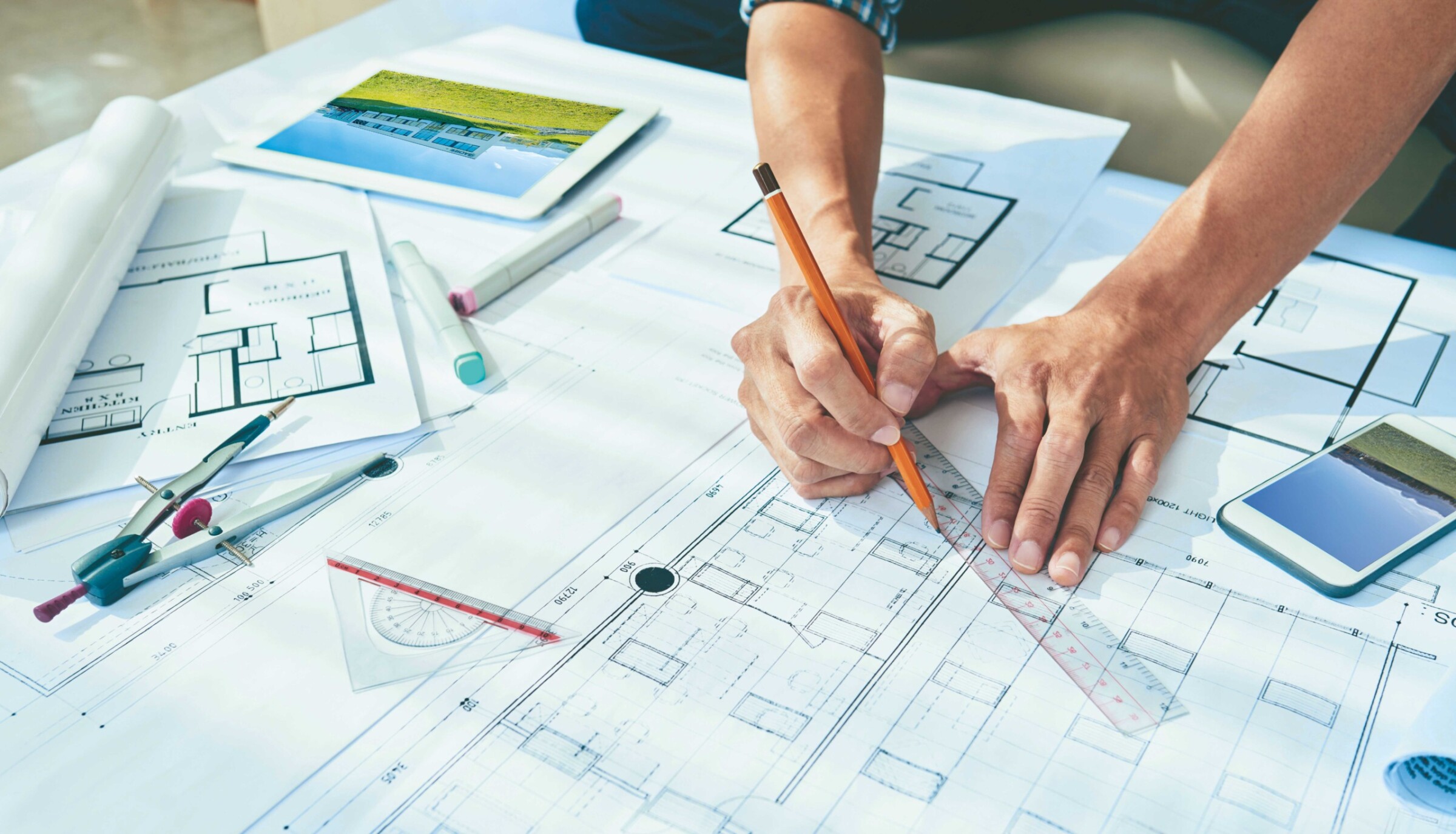 His own architect. Short ways are a must

Form follows function – this design principle is fully embraced by metalworking company Bacher GmbH in Upper Bavaria, not only in its products, but also at its newly built company headquarters. Participating in the firm’s success are EDM systems from Mitsubishi Electric.

His own architect. Short ways are a must.

The headquarters of Bacher GmbH Metallverarbeitung in Bad Feilnbach is situated in magnificent scenery. Could it be that the view of the Alps, with the Wendelstein mountain always within sight, has a positive effect on everyday work? Space and openness coupled with short distances, beautiful design and functionalism were at any rate key points for Josef Kuchlmeier, Bacher’s Managing Director, when it came to designing the new building.

Yet the company’s beginnings were modest. Sebastian Bacher started out more or less in a garage back in the Seventies – a far cry from today, with 70 employees busy on a 5500 m² site. Although Sebastian still drops in on the company every day, the day-to-day running has been entrusted to the safe hands of Kuchlmeier, who learnt his trade under Bacher’s watchful eye. Kuchlmeier, Bavaria’s youngest master toolmaker in his day, gradually grew into the management role, before officially taking a majority share in Bacher GmbH last year. 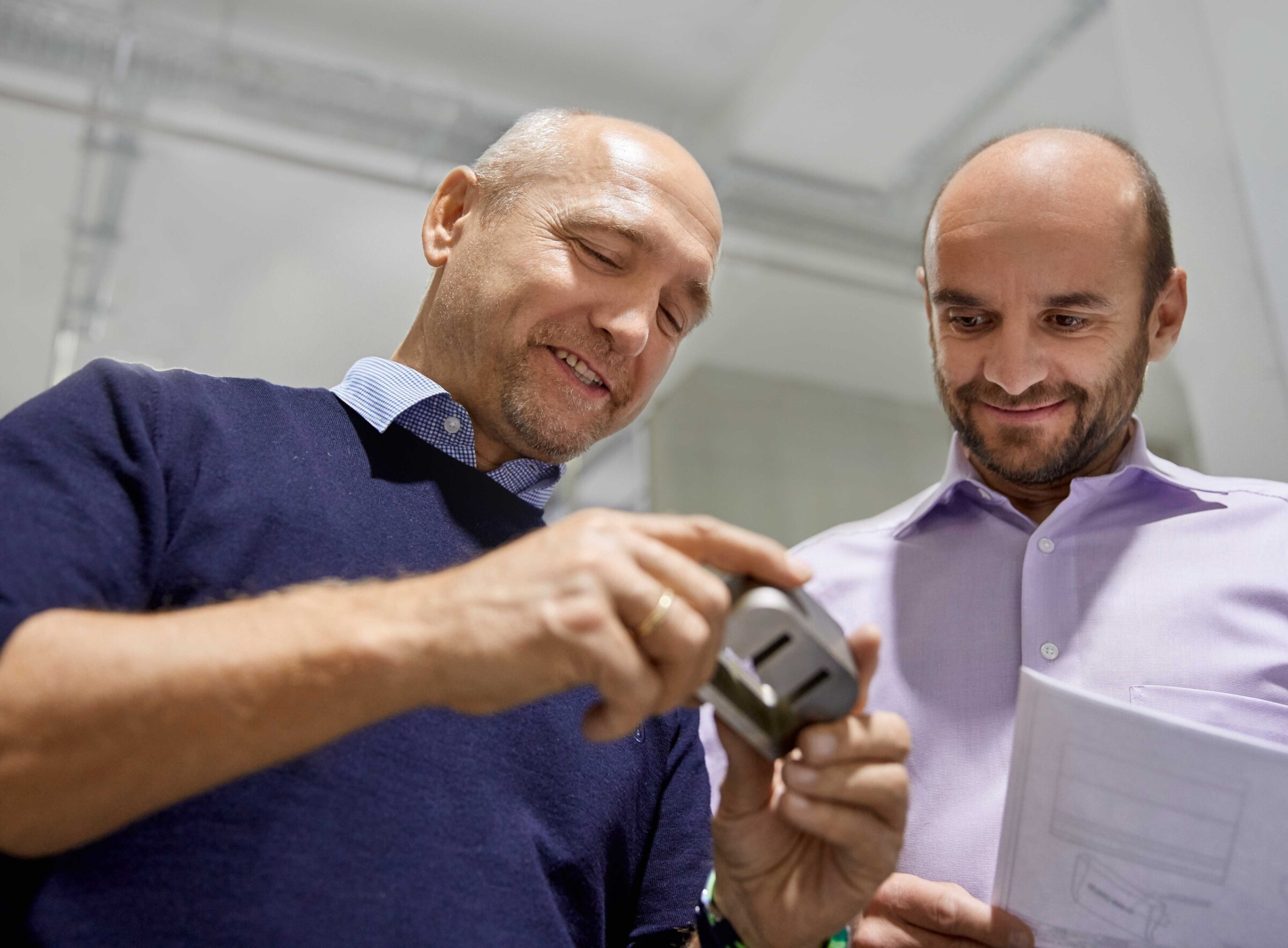 A friend and colleague of mine has been very happy with his four ­Mitsubishi ­Electric machines for many years, and he made the decision easy for us.

Over the last few years, Kuchlmeier has imprinted his stamp on the company. When the existing shop space at the previous site proved again to be too constraining, Kuchlmeier decided finally to break with the past and have a new building erected in Au near Bad Feilnbach. The plans for the building completed last year were the work of Kuchlmeier himself. The building was to be functional, so the distances between the various departments were to be kept short, i.e. from toolmaking with its roughly 20 machines to the stamping shop, quality assurance and laser-cutting etc. “But I also wanted shops with plenty of headroom and light, and plenty of space between the offices so that it’s enjoyable to work there,” says Kuchlmeier. Only then, he believes, is it possible to be creative and come up with unusual solutions for customers.

Creativity, speed and accuracy – these are the hallmarks, as it were, of the Upper Bavarian company. This also finds expression in its broad portfolio of products and services, ranging from the achievement of tolerances in hundredths of a millimetre in the chip industry, for example, to lamps and showcases for the restaurant trade where, in addition to production proper, it is above all a question of explaining to the customer where there is potential for improvement, e.g. by optimising a lighting system. The size of run varies from one sector to the next – some parts are produced in their millions; in other cases, it’s a single prototype. 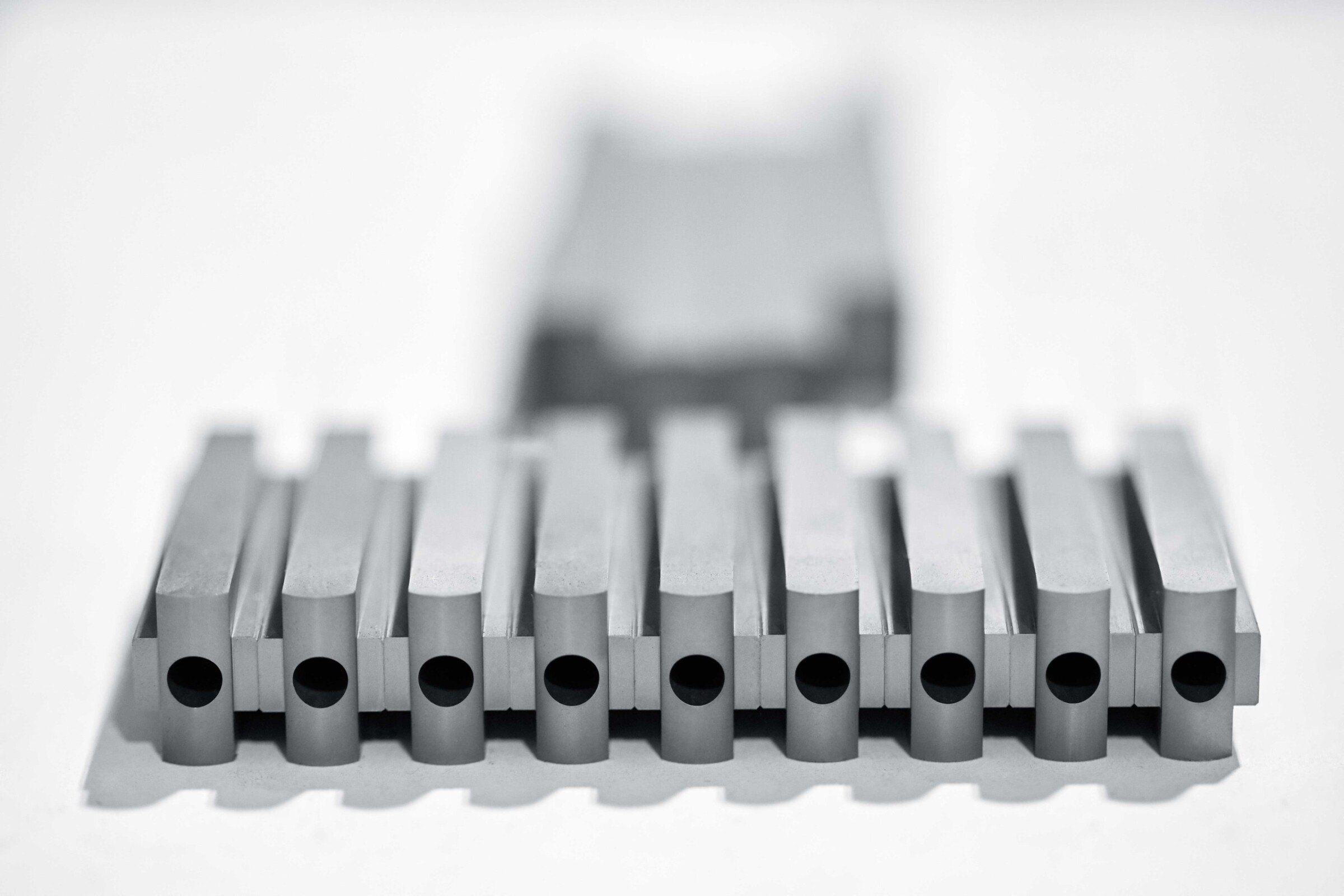 The wire-cutting machines are mainly needed for the production of the company’s own tools.

“We serve a broad base of sectors, ranging from the automotive industry and beverage bottlers to office furniture makers. And each sector has its own requirements,” says Kuchlmeier quoting the example of on-site sampling from the furniture industry. Large companies wishing to furnish new buildings typically request sample items for their offices. The deadline pressure here is high, as work on the new furniture is performed right up to the last minute. “The hardware sometimes has to be supplied in a matter of hours,” Kuchlmeier explains. His team then works right up to the deadline so that office furniture maker Steelcase can present its best design.

Some 2.000 threading operations were performed on the workpiece without interuption

The procedure is not quite as hectic for products for Krones, the world market leader for beverage filling lines. This is where the company has been supplying components for filling lines for decades. Working closely with Krones, it has no inhibitions about making its own suggestions. In this way, it has improved a gripper that turns the bottles before sterilisation. Bacher also supplies drainage components for shower rails, is currently modifying stands for mobile radiant heaters and produces layers for chip test devices. Whatever product is ultimately supplied, each of them has to comply with Kuchlmeier’s quality and design standards.

Change of make in the EDM sector

And it’s not only architecturally that Kuchlmeier has a clear vision. More or less concurrently with the erection of the new building, he invested EUR 2.5 million in new machine tools even though the machine park is always state-of-the-art. Among them were two wire-cut EDMs (MV1200R and MV2400R) and a start-hole drilling machine from ­Mitsubishi Electric, which were installed in the new building. This was associated with a change of make. 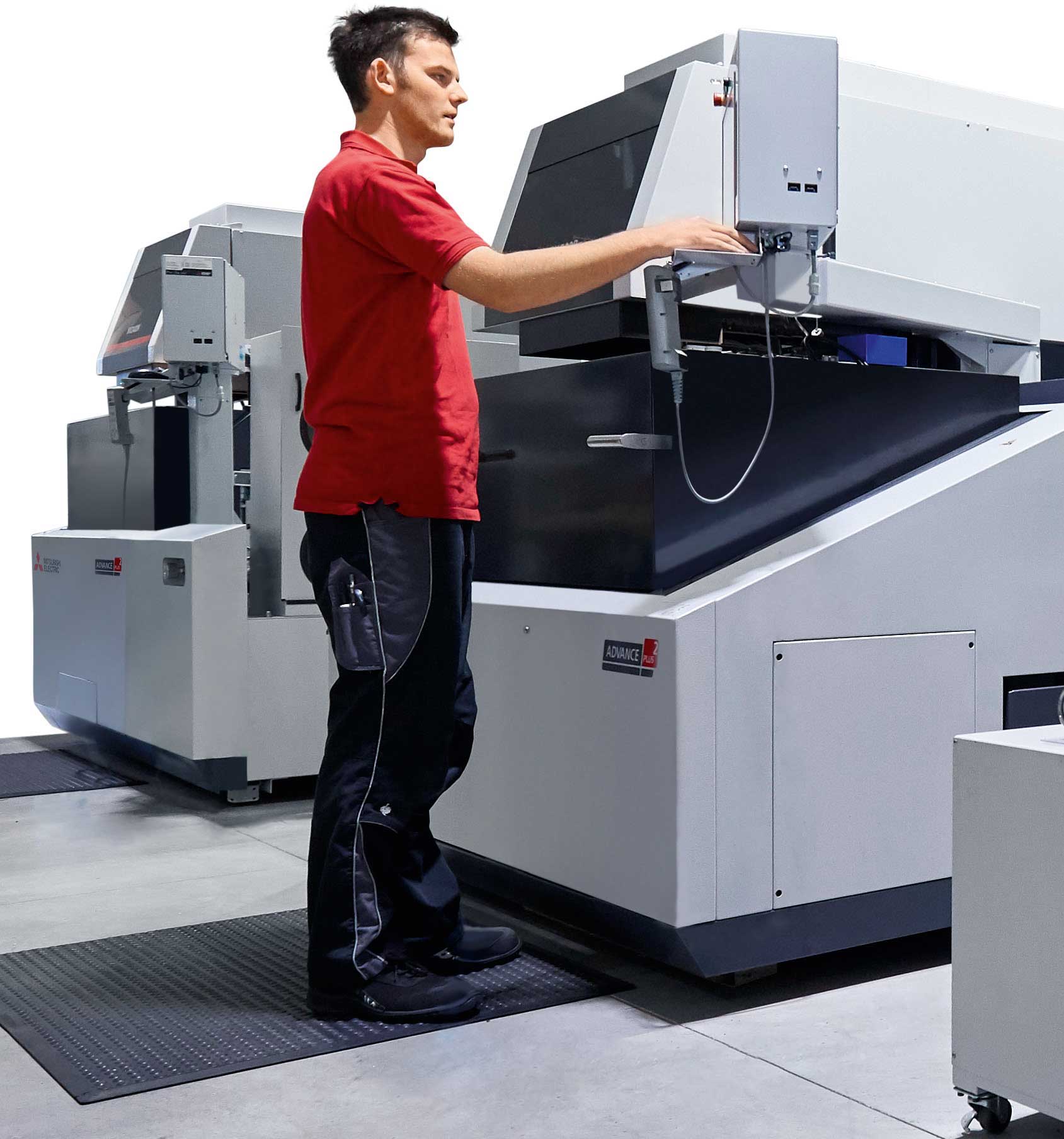 More or less concurrently with the erection of the new building, EUR 2.5 million was invested in new machine tools – among them two wire-cut EDMs.

“30 years ago we were genuine pioneers by resorting to EDM,” Martin Schmid of toolmaking recalls. Although output and surface finish have improved significantly in the intervening years, speed is not everything. “We even prefer to err on the slow side, particularly if the machines are running overnight in any case. What’s important is that the component is finished by the next morning,” Schmid adds. 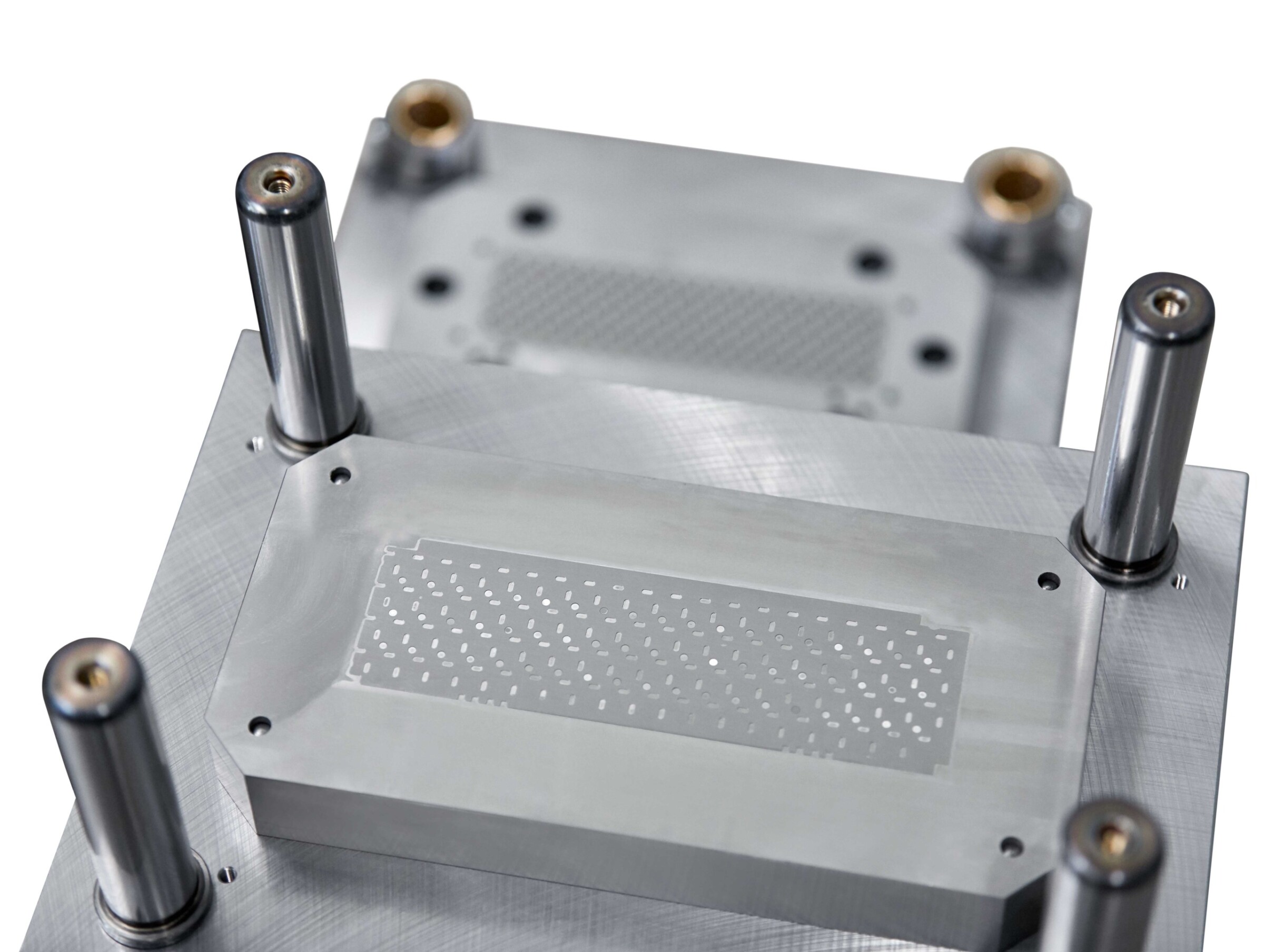 The tool for the insulation layer that, among other things, has to generate 180 penetrations.

The two machines are used mainly for the production of the company’s own tools, of which about 350 are in circulation. “The oldest dates back to 1975 and is still needed,” says Schmid. The company also produces, on a smaller scale, new tools or repairs existing ones for local companies. “In the production of components, we work hand-in-glove with other companies in the region,” Kuchlmeier stresses. “In our Wendelstein network, we can count on one another and we all adhere to the same quality standards.”

Trouble-free integration in the MVR machines.

It was in these circles that Bacher was given the tip to change to EDM systems from Mitsubishi Electric for the future. “A friend and colleague of mine has been very happy with his four Mitsubishi Electric machines for many years, and he made the decision easy for us,” says Kuchlmeier. He was also persuaded by the 12-year guarantee on the control system and drives, and the accuracy and minimal maintenance requirements of the Mitsubishi Electric machines. Learning the ropes on the new machine type went smoothly. Schmid and has workmate Markus Kotz attended training in Ratingen and felt well-equipped afterwards.

The insulation layer consists of a glass-fibre reinforced plastic film only 0.2 mm thick.

They recently experienced the true quality of the ­Mitsubishi Electric systems in the production of insulation layers of a glass-reinforced plastic film 0.2 mm thick. In a chip testing machine, this layer prevents the tiny chips (measuring just 2 by 2 mm in size) from slipping during testing. For the tool required for this, which later has to generate, among other things, 180 extremely precise penetrations in the film, the Mitsubishi Electric system operated continuously for 254 hours. “Our old machines wouldn’t have achieved this accuracy – the kerf width itself is only 0.01 mm – so we would have had to farm out the job to someone else,” Schmid admits. In the production of the tool for the layer, they also witnessed the quality of automatic threading – some 2000 threading operations were performed on the workpiece without interruption. Perfect, from Schmid’s point of view!

When the company moved into the new building last year, Sebastian Bacher was still convinced that his successor had chosen a size too large. But the company continues to grow –the shops are already well stocked with machines and workplaces. The company, after all, also attaches great importance to training, and Kuchlmeier has no difficulty attracting good youngsters. Convincing proof of this is that the guild’s best apprentice three years ago came from Bacher’s ranks. And the special working atmosphere here undoubtedly played its part.

Core business:
Stamping, toolmaking and laser-cutting, from prototypes through to parts produced in series