ABUS, a company world-renowned for its security solutions, manufactures window, door and cycle locks at its location in Rehe in the Westerwald, Germany. So that it can produce even complex tools quickly and with maximum precision, its experts resort to high-tech EDMs from Mitsubishi Electric. 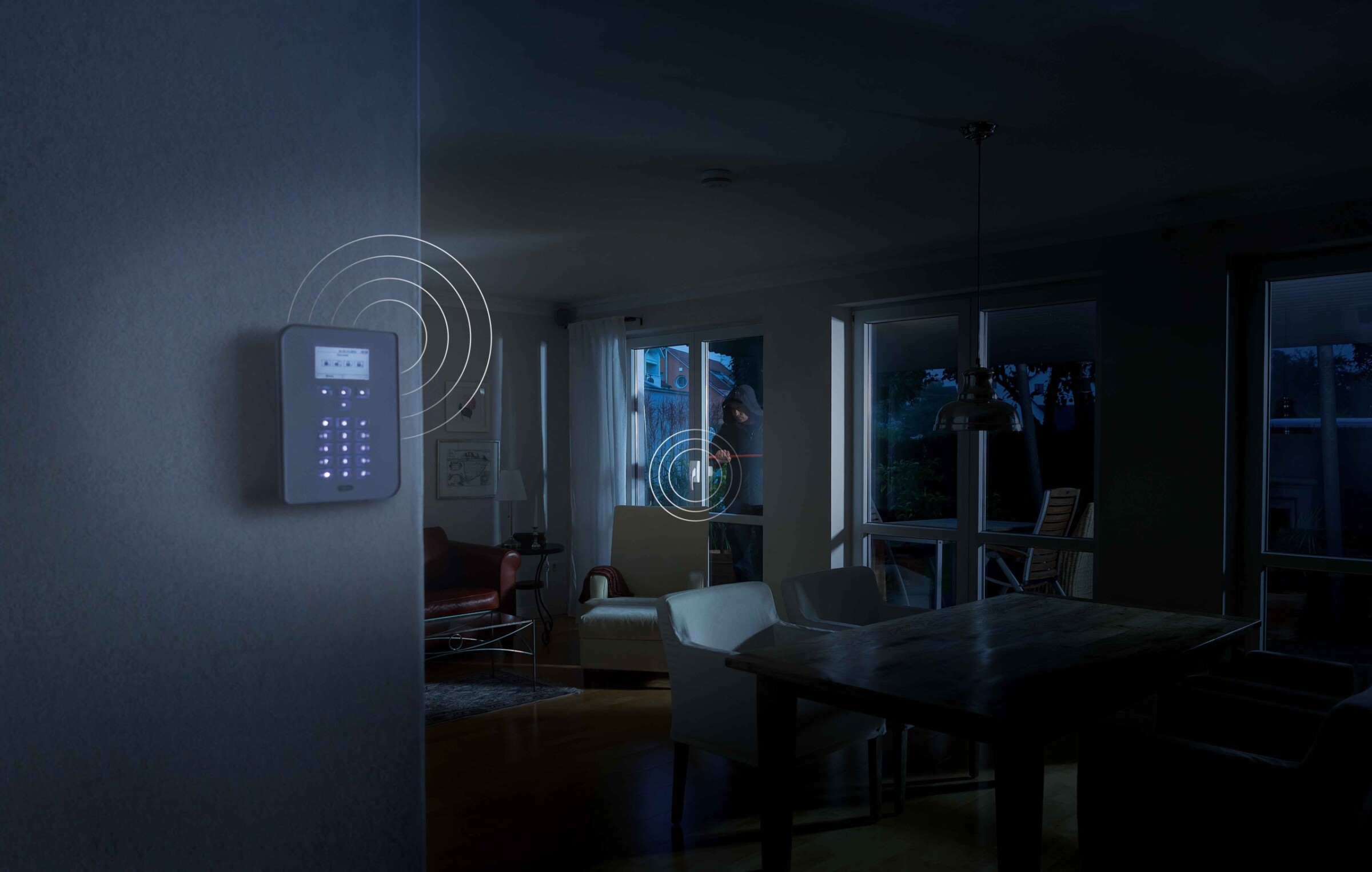 ABUS, a company world-renowned for its security solutions, manufactures window, door and cycle locks at its location in Rehe in the Westerwald, Germany. So that it can produce even complex tools quickly and with maximum precision, its experts resort to high-tech EDMs from Mitsubishi Electric.

Burglary is flourishing in Germany: in 2015, burglars broke into private homes almost 272,000 times, and intruders broke in another 67,000 times without leaving a trace – simply because a window tilted open was an invitation to them. But more and more home owners are evidently declaring war on unwanted visitors, as the demand for security systems is steadily growing. ABUS August Bremicker Söhne KG from Wetter in Westphalia has been one of the prime movers and ­innovation leaders on the market since 1924. It develops alarms, window and door locks, locking systems and video surveillance for security at home and all kinds of locks and securing mechanisms for bicycles and motorcycles – anything that promises ­dependable protection from burglary and theft can be found in the ABUS portfolio. 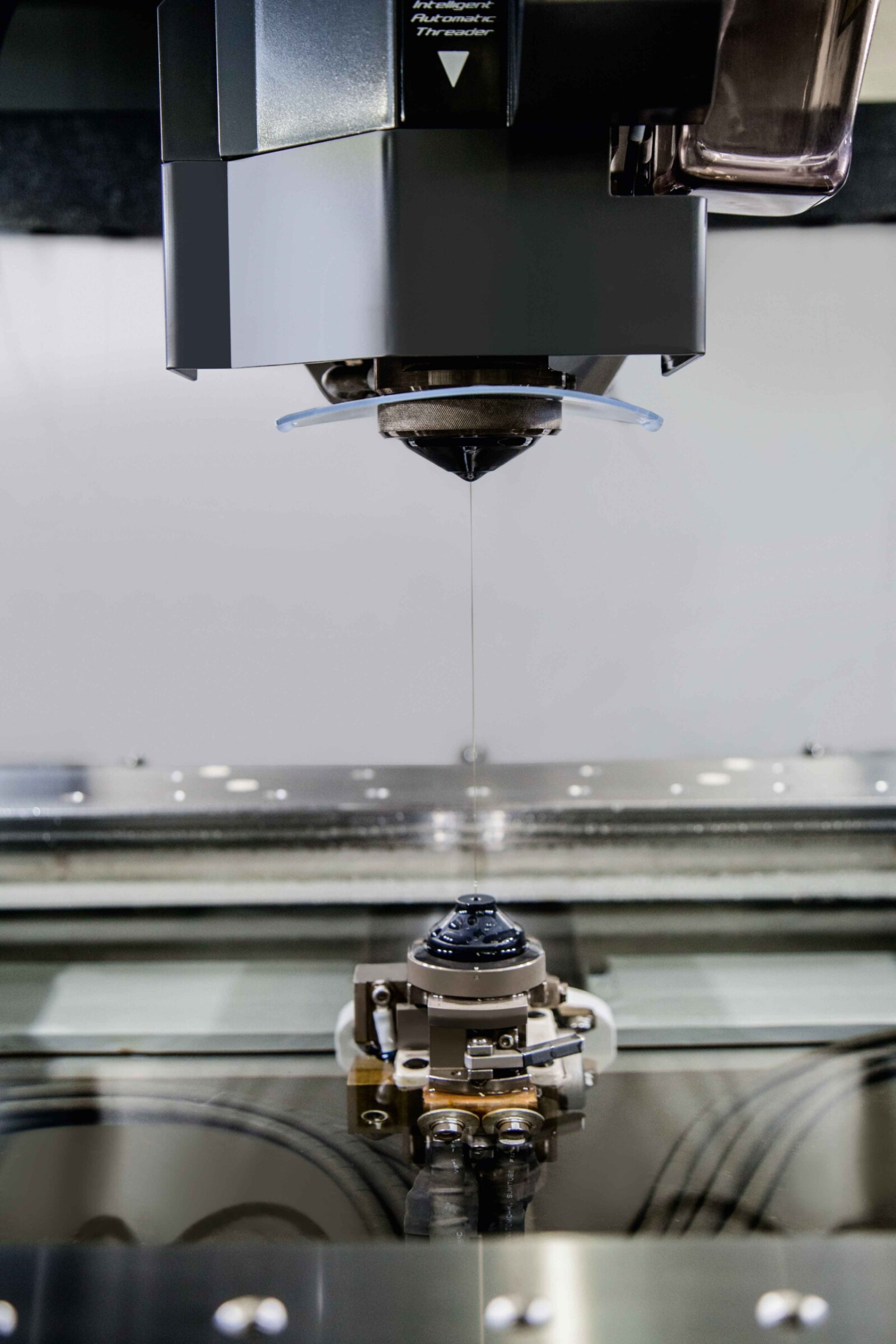 Progressive technology: if the cutting wire of the MV2400R breaks, the system rethreads it ­automatically and with precision.

The research and development centre and the main production installation for window, door and cycle locks in Rehe in the Westerwald are of outstanding importance for the company group. 400 people are currently employed at the location in existence since 1957 and bear a high degree of responsibility. Because parts production and assembly at ABUS are carried out on the “one-piece flow” principle in which employees do not stay in one position on the production line while parts move from one station to the next, but accompany the workpiece on its entire journey, advancing steadily from one processing stage to the next through to its completion. The advantage of this modus operandi is that employee motivation remains high thanks to his or her full responsibility for the product. In addition, it is easier to keep track of workpiece ­quality, and delivery times are shortened.

Parts are produced and assembled in one-piece flow

Technology leader thanks to superlative precision

Another key quality aspect is that the security experts in Rehe produce their own tools and special machines. This is because the production of locks and security products is precision work that would not be possible without specially designed tools and machines. “Only with our own technology are we able to achieve the proverbial German precision that ABUS is accustomed to,” says Georg Neufurth, Head of Technology and Organisation in the Rehe toolmaking department. The tool and machine parts required for lock production, such as punching and other dies, mould slides, shifting links, and guide and holding plates, have to be machined with hundredth-millimetre precision out of the metal blanks. This rigorous stipulation also ­applies to the production of the mould cores required for the construction of high-pressure zinc casting dies, injection moulds and prototypes. The first samples of newly developed locks are produced in Rehe, which are then tested exhaustively in the ABUS laboratory before they go into mass production. “We therefore have to be sure of achieving the highest possible precision and surface quality,” says Neufurth. 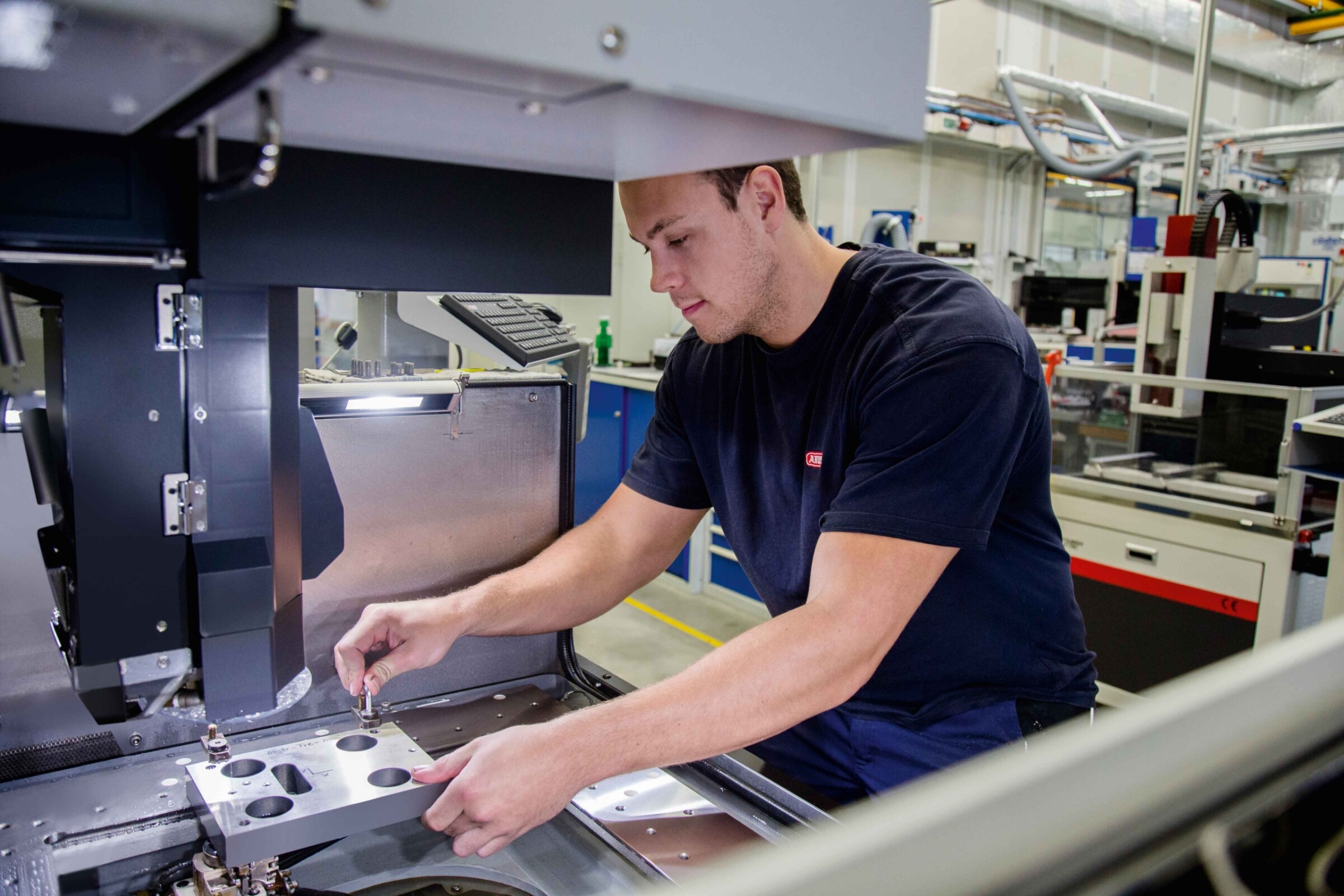 Precision starts with set-up – the MV2400R helps here with ergonomic access to the machine.

The manufacture of security products is precision work

Because of these exacting requirements, ABUS makes use of machines from Mitsubishi Electric for wire-cut EDM. And has been doing so for over 15 years, as Michael Zeitz, Head of Toolmaking, explains: “We’ve been cultivating a strong partnership for many years. We have always been well looked-after, and the after-sales service is quite outstanding. If problems ever arise, the Mitsubishi Electric technician is immediately available on the other end of the line or calls back after a very short while.” Only a few months ago, the toolmakers sold an FX20K that had been running smoothly since 1999 to a firm nearby and invested in an MV2400R to replace it in July. This now supplements the Mitsubishi Electric FA20V wire-cutting machine that has been performing reliably at ABUS since 2006. The toolmakers expect the new MV2400R to make ­production even more efficient and faster. “We are the technology leaders and therefore have to take pains to keep our production equipment in line with the state of the art,” says Zeitz. Before purchase, Neufurth adds, they had compared the MV2400R with other wire-cutting machines on the market. “But we soon came to the conclusion that the MV2400R with its many functions, equipment features and optional ­extras suits us best. The Mitsubishi Electric price/performance ratio is just right, so we stayed with the same manufacturer.” 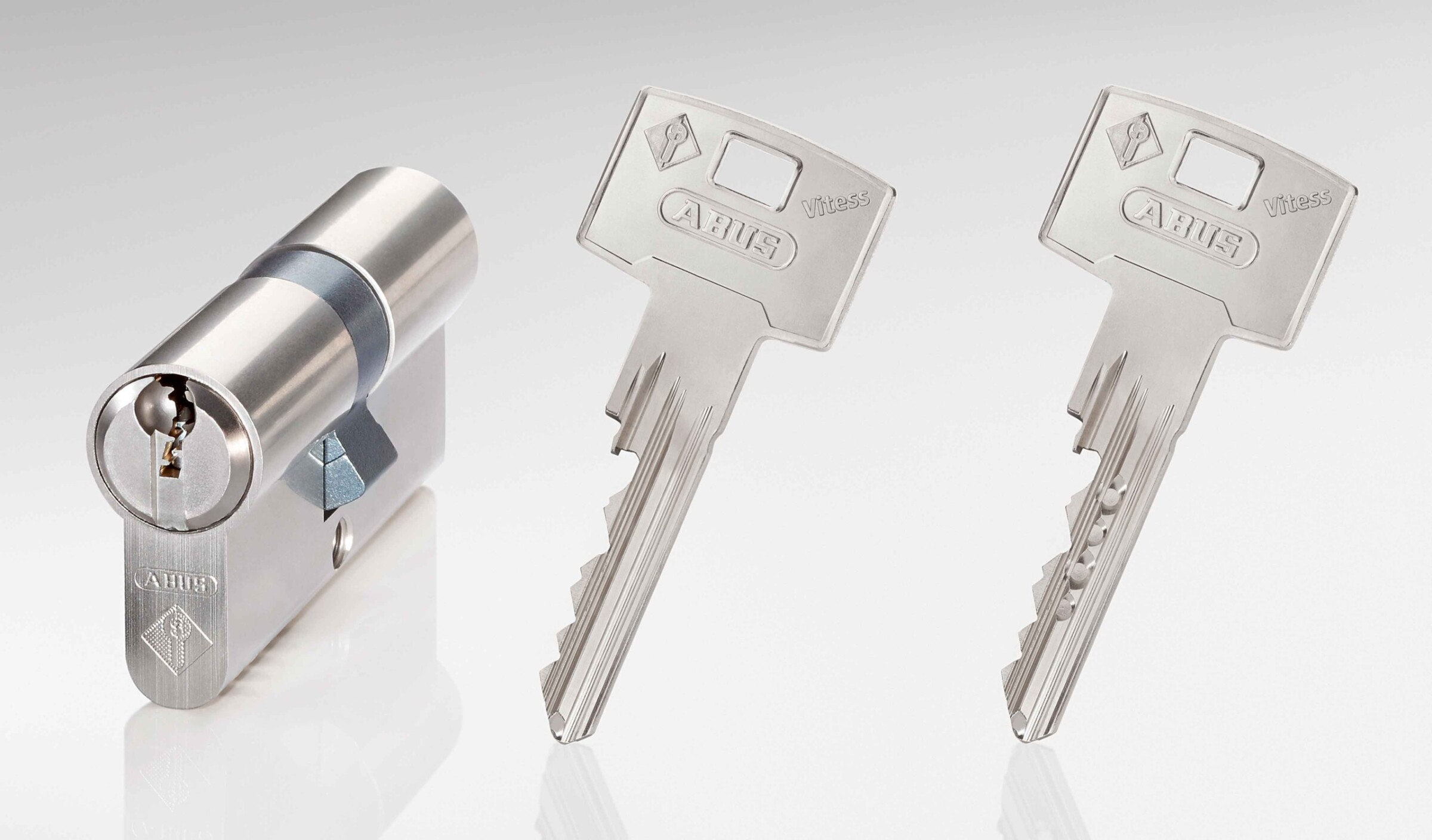 Thanks to its integrated test units and its multiple paracentric curved profile, the Vitess locking system from ABUS provides protection from tampering with the cylinder and illegal key copying.

The price/performance ratio is just right

Reliable wire-cutting around the clock

The positive verdict of the ABUS experts is based among other things on the advanced drive technology using Tubular Shaft Motors. Together with the linear scales on all axes and the rapid optical data transmission, the MV2400R ensures maximum accuracy at high working speeds and permits efficient multi-sided machining in conjunction with an additional axis integrated directly in the Mitsubishi Electric CNC. “This is a very useful feature for us,” says Neufurth. Another ­important function for him is the automatic wire threader that can also work in the dry and thus also offers solutions in special threading situations. In the dielectric as well, the machine always finds the breakage position and reliably rethreads the wire. This not only saves time, but also permits unmanned operation at night. This feature is readily exploited in Rehe. “We set up the tool workpieces in the evening and have them machined overnight so that we can ­finish them the next day. This saves us a lot of time,” says toolmaker Steve Ebers, one of three employees at ABUS who regularly work on the MV2400R. Another bonus in this respect is the machine’s zero-point clamping system, which markedly reduces set-up time and thus accelerates production, says Ebers. The work table accessible from three sides is ergonomically aligned to the z = 0 level, which means that workpieces can be perfectly ­positioned even without clamping bars. “The parts can thus be machined with greater precision.” It didn’t take long for the ABUS specialists to acclimatise to the new MV2400R, as Mitsubishi Electric has a policy of adapting the user interfaces of its current control generation to that of the predecessor machines. This way, operators can build on their experience of older Mitsubishi Electric machines. “We were able to make use of the functions and options after only a short while,” says Ebers. 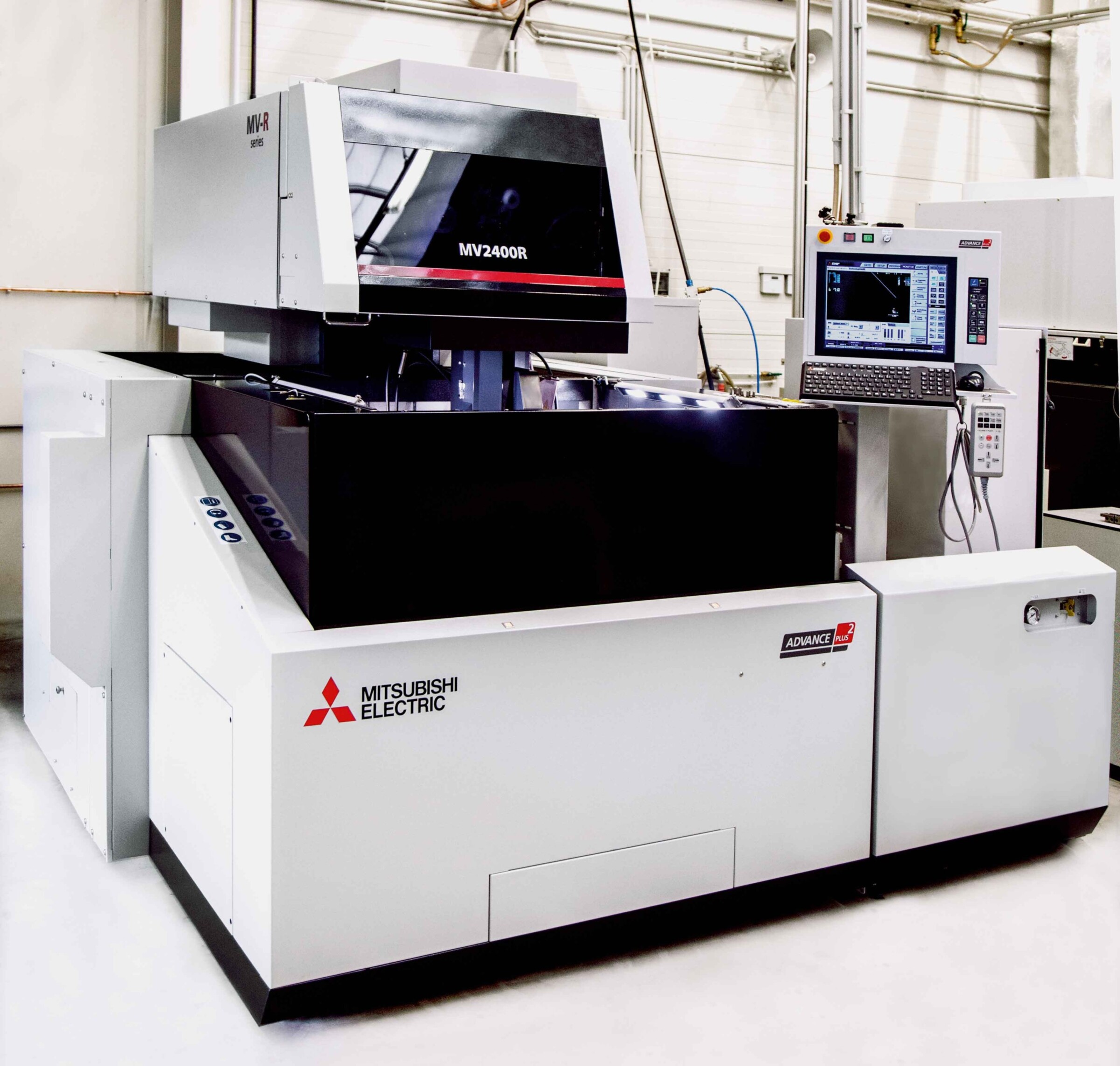 Innovation at ABUS: a new MV2400R has been adorning the EDM department of the security specialists since July of this year.

In Rehe the CAD data required for machining, such as the geometry of the desired finished parts, are prepared by the responsible mould and tool designers. The programming proper of the MV2400R then takes place in the programming office of the ABUS EDM department where the machines are supplied with the data generated on the computer. Here, again, the operators can draw on their existing experience with Mitsubishi Electric, although the MV2400R permits further-improved generator settings. They can ­resort to the integrated database and store individually configured technology parameters there. And thanks to the progressive programming and operating strategy, toolmaking at ABUS was up and running within just a few days. The fact that ABUS’s precision and quality strategy is proving effective with key support from Mitsubishi Electric is illustrated by the growing demand for the security products of the Westerwald company. Owing to the plant’s high workload, ABUS is currently extending its production site in Rehe by 3000 square metres. 70 new jobs will be created in the new production shop scheduled to go into operation at the beginning of 2017. “The extension of capacity clearly expresses our commitment to the Rehe location and German manufacturing,” says Neufurth. And the next stage of extension is already in the pipeline. This envisages among other things a revamp of ABUS’s academy, quality assurance and test laboratory. Mitsubishi Electric is one of the technological pillars of this growth. 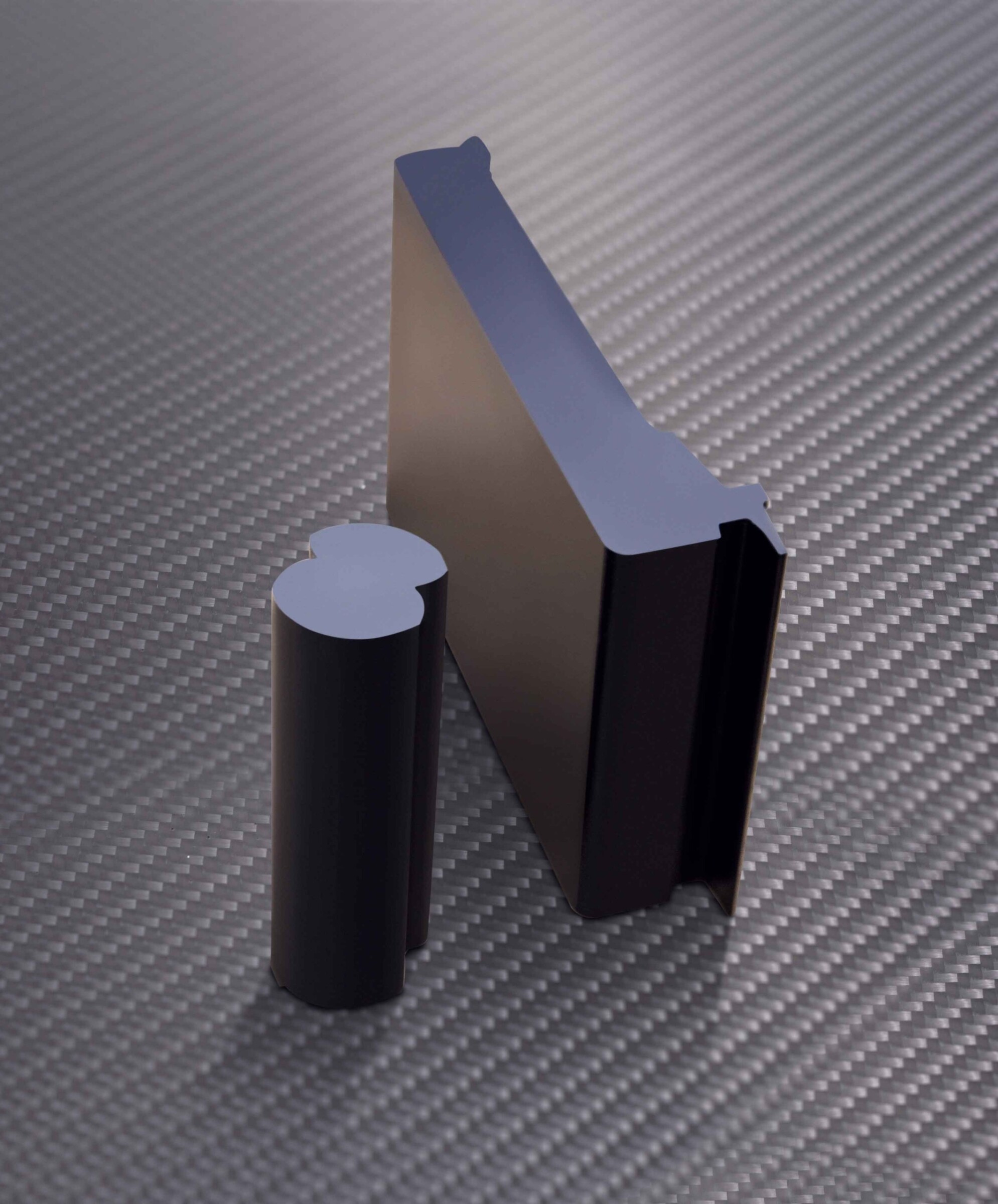 Key equipment: for quality reasons ABUS produces its tool parts and dies for lock production itself. 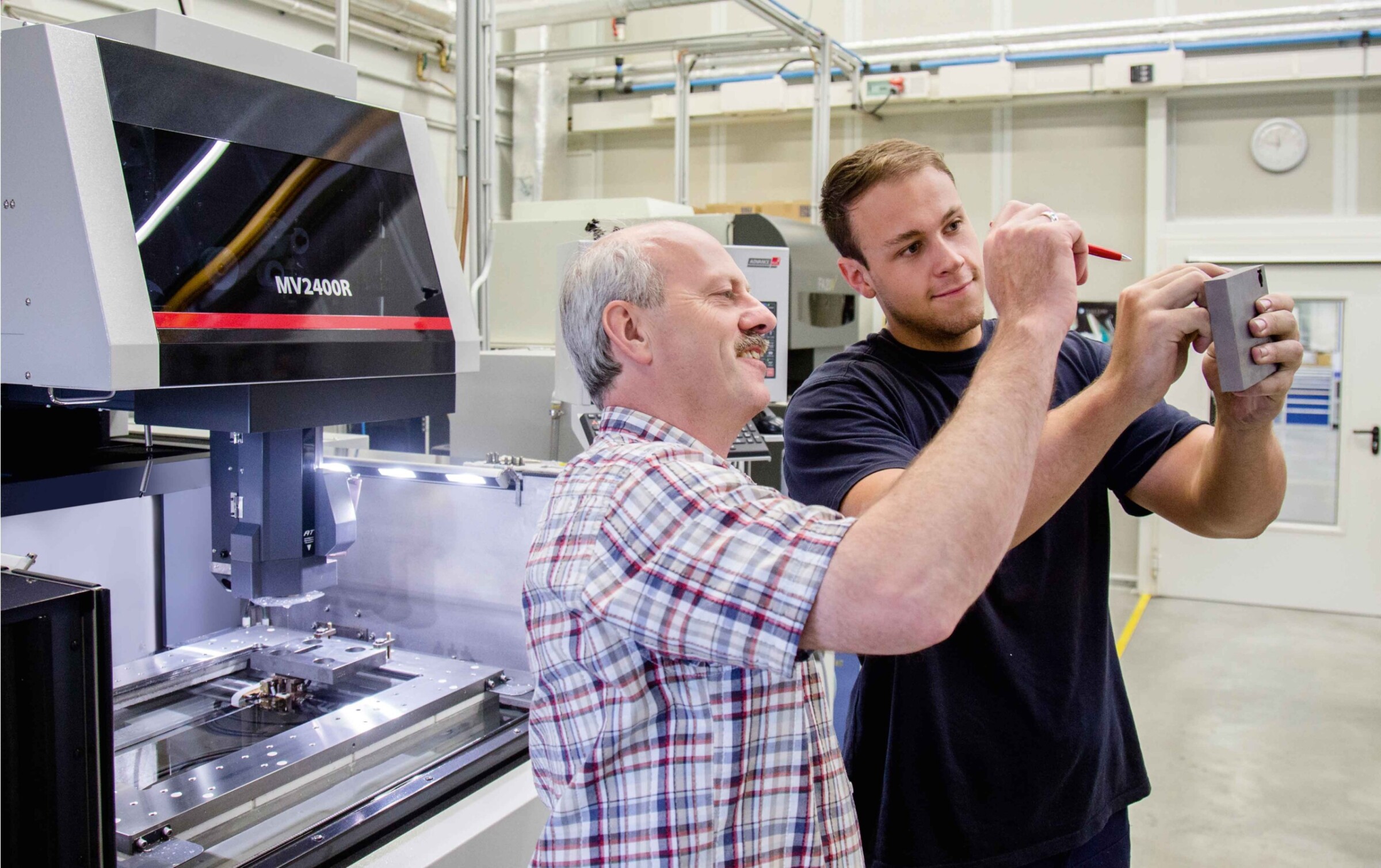 Precision is called for at ABUS and the MV2400R is more than a match for these high expectations. 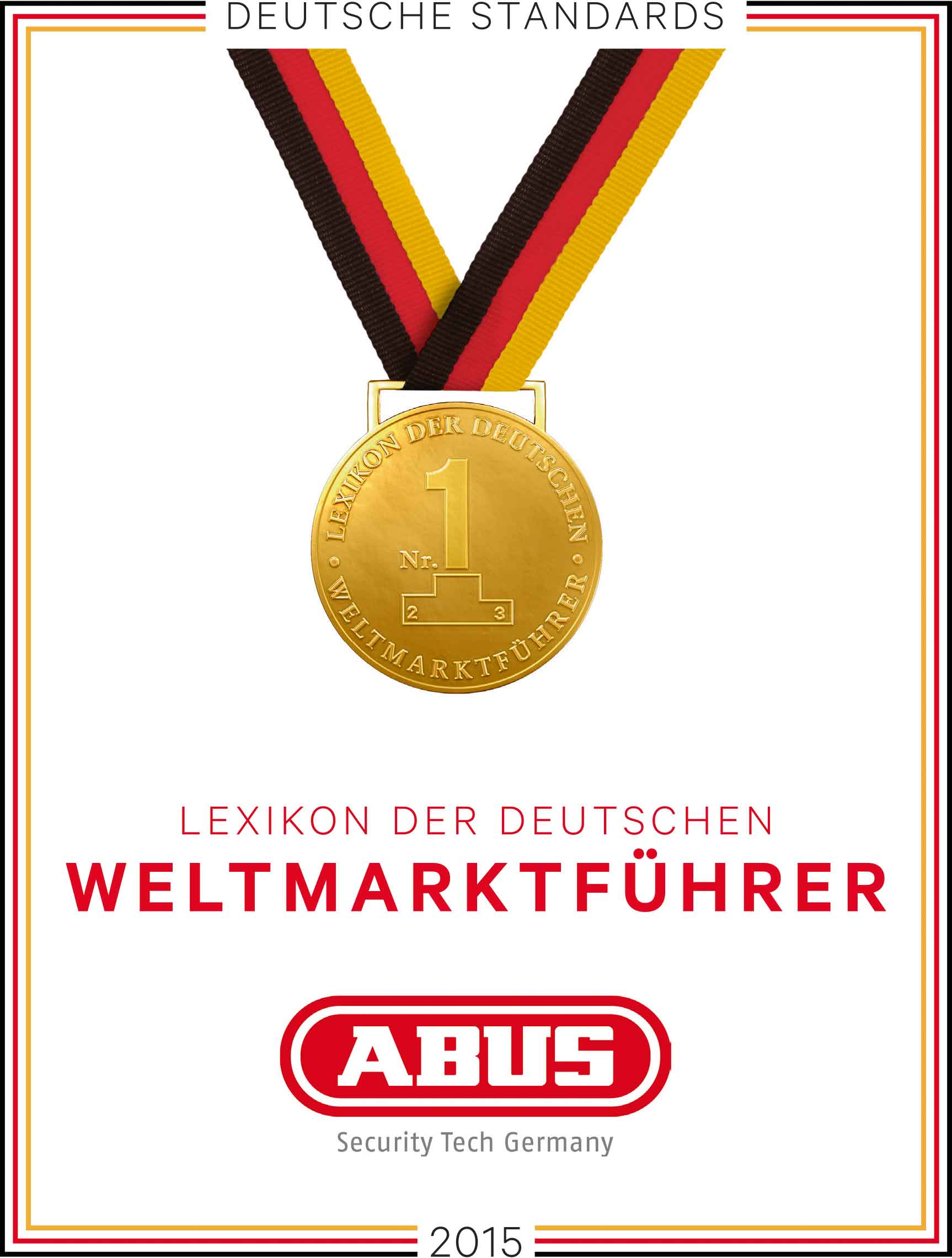 On 27 January 2015, the “Lexikon der deutschen Weltmarktführer” (Encyclopaedia of German World Market Leaders) of business publisher Deutsche Standards EDITIONEN celebrated its premiere in the context of the Summit of World Market Leaders at Kunsthalle Würth in Schwäbisch Hall. With an entry in the new edition, ABUS as a family-run company with a global market presence in the 10th decade of its existence has again been commended by editor and publisher Dr Florian Langenscheidt and Prof. Dr Bernd Venohr.

Most innovative brand of the year 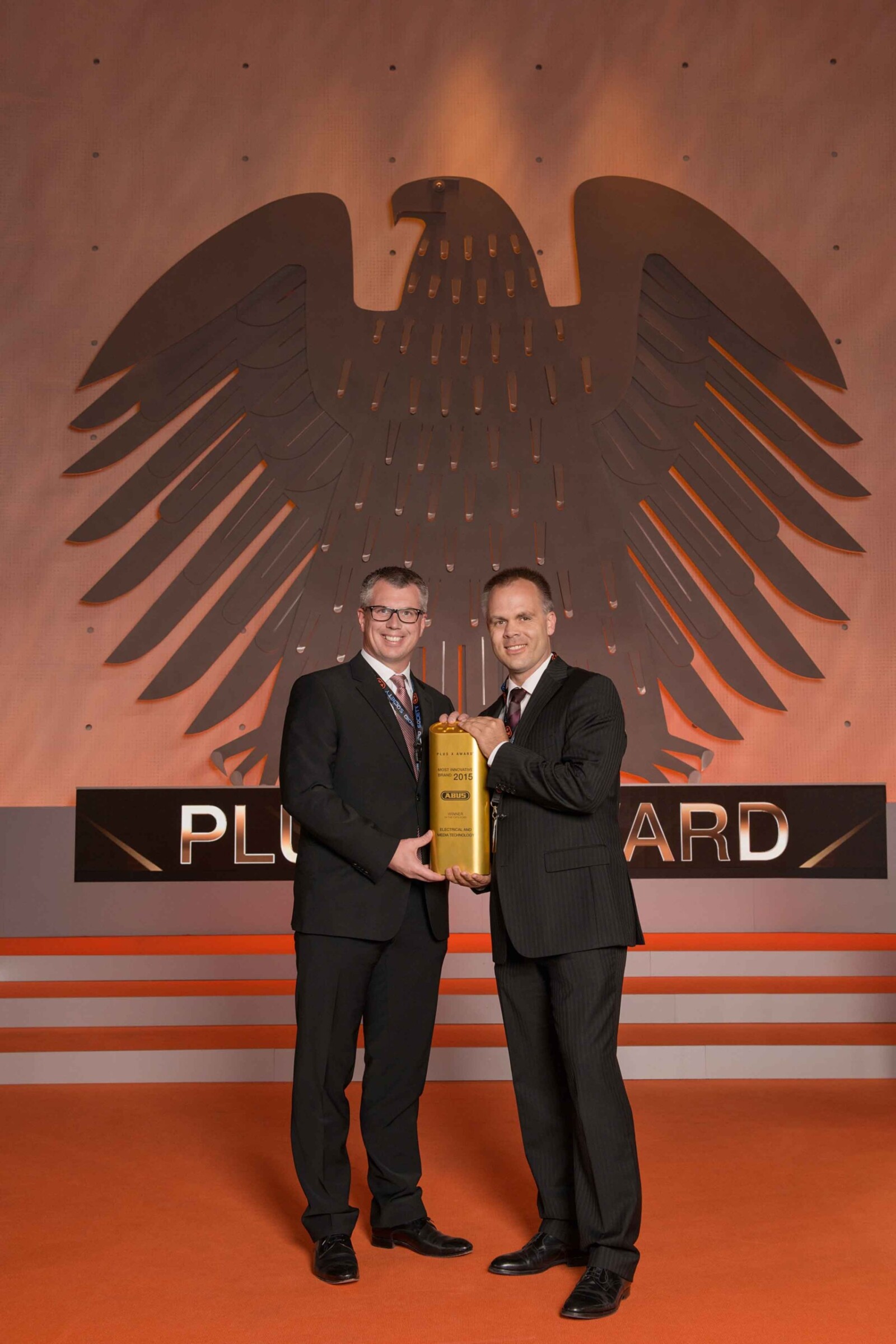 Most innovative brand of the year

At a gala in the old Bundestag parliament building in Bonn, ABUS received the Most Innovative Brand Award and hence the most ­prestigious commendation from the Plus X Award on 18 June 2015. What is hailed as the biggest innovation prize for technology, sports and lifestyle products thus commends the security expert for its many innovations in the field of electronic security technology. Having won this high-calibre award in 2013, this is the second time that ABUS has beaten all its rivals in the Electrical and Media Technology bracket and been selected as the year’s most innovative brand.

Brand of the century 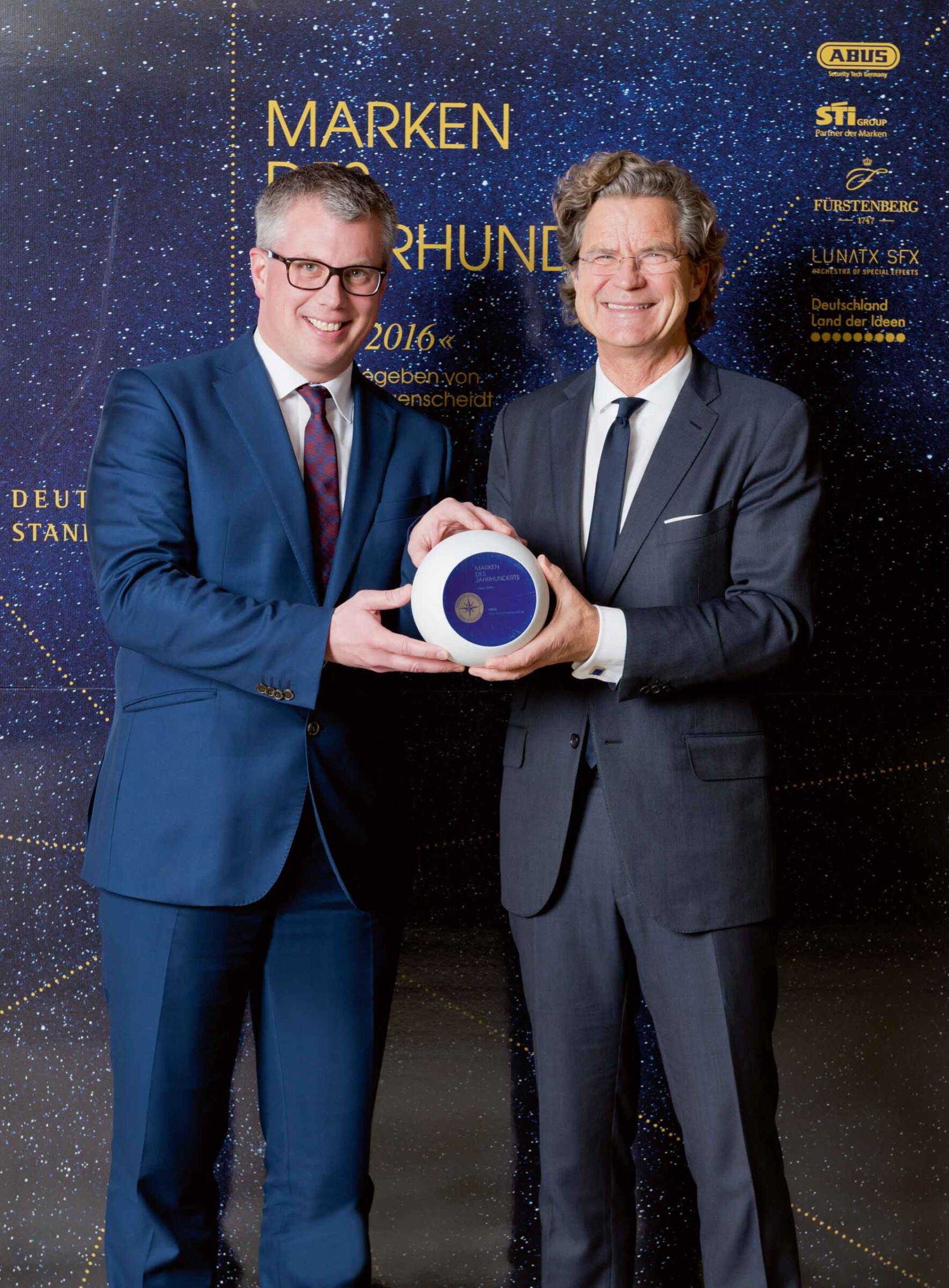 Brand of the century

The cream of German brands was commended by business publisher Deutsche Standards EDITIONEN in Berlin in 24 November 2015. Security specialist ABUS again confirmed its status as a global brand and was commended as one of the best German companies as a Brand of the Century. In a ceremony, the “Stars 2016” award was presented by publisher and editor Dr Florian Langenscheidt to the stars in the firmament of German brands. 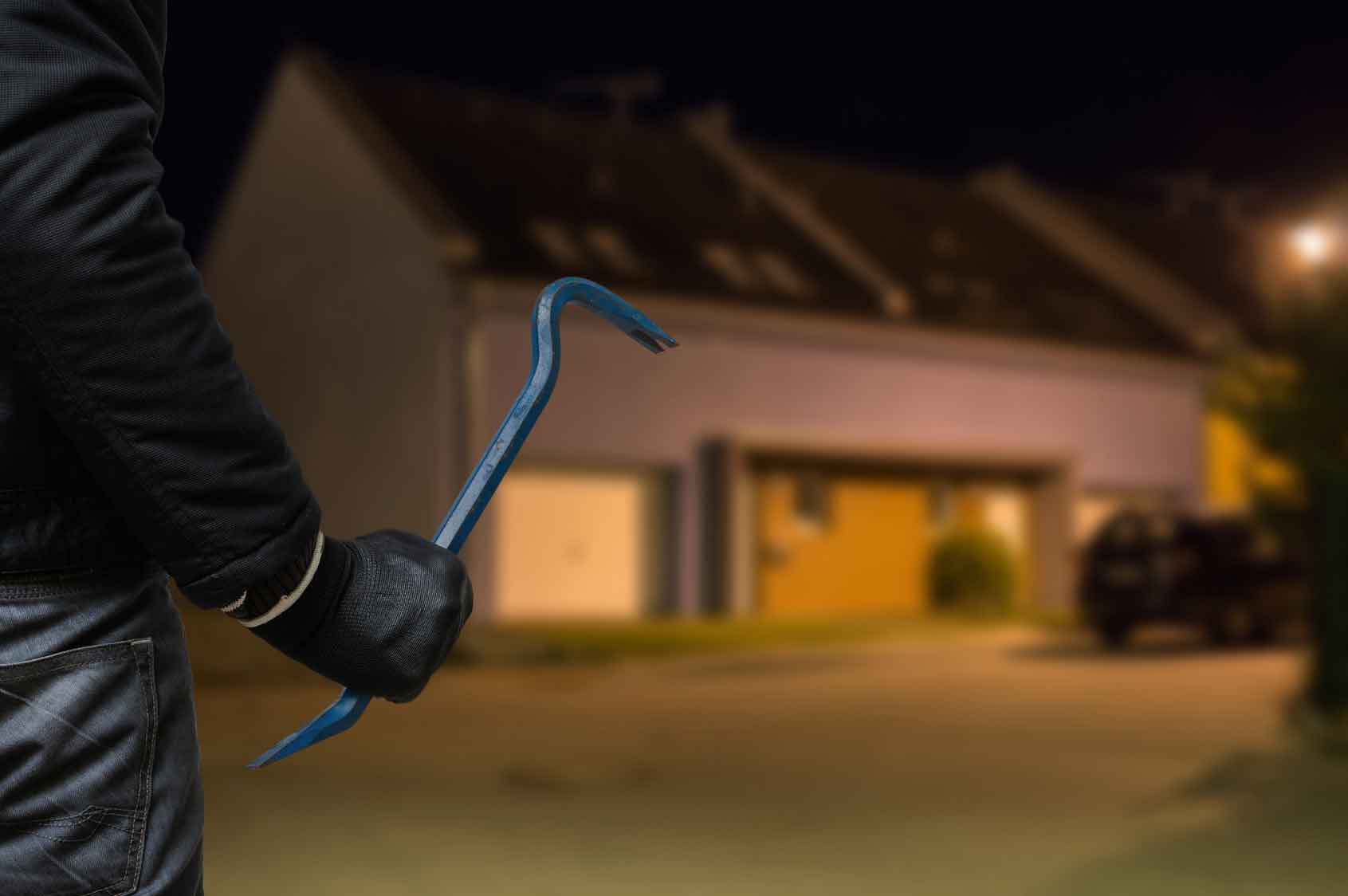 The police crime figures show that the number of break-ins in Germany has been increasing sharply for years. Police officials recorded over 167,000 attempted and successful break-ins, which is 50 per cent more than in only 2008.The clearance rate for this criminal offence is relatively low at 53.4 per cent.

The hot spots for burglaries include the Ruhr district, Hamburg and environs, Berlin and Bremerhaven. In Dortmund there are 578 burglaries per 100,000 inhabitants. This compares with only 14 in the Bavarian rural district of Freyung-Grafenau.

Investigators attribute the rise above all to professional, highly mobile gangs from abroad. In the case of domestic burglaries, the statistics reveal a disproportionately large increase in organised, travelling groups of offenders from South Eastern and Eastern Europe.

The basic problem is that intrusion into homes is a very low-risk and nevertheless lucrative form of crime. What’s more, the criminals can travel with their loot without difficulty back and forth throughout the EU.

ABUS KG is part of the ABUS Group that supplies markets on all continents with tailor-made security solutions.

The ABUS Group has 3,500 employees ­worldwide, 400 of whom work at the Rehe location in the Westerwald.

The research and development centre as well as the main production plant for window, door and ­cycle locks have been domiciled here since 1957.
Mitsubishi Electric has been equipping tool ­production in Rehe with EDM systems since 1999.