In the hundred years plus of its company history, DORMA – today a group with a 6,500-strong workforce – has evolved into a globally operating systems supplier of door-related products. The world market leader in door control, movable room dividing systems and glass fittings has 71 subsidiaries in 47 countries and operates three plants at its headquarters in Ennepetal, where 1200 people are employed. 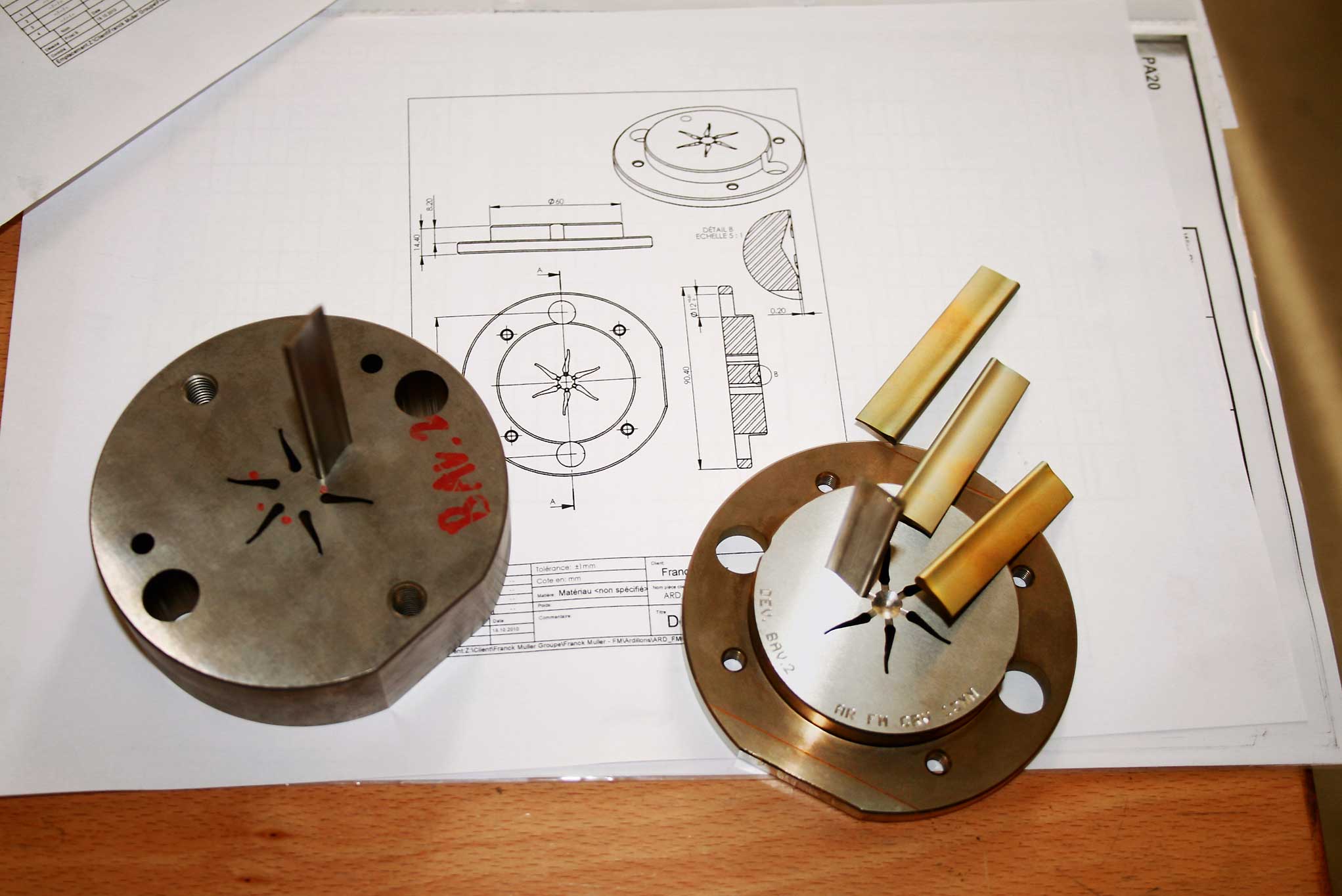 For many firms, it makes no economic sense to run a tooling department of their own, particularly for stamping tools. This is a job for component suppliers, also known as jobshops, which concentrate on a certain line of business and have the highly specialized production equipment and unique expertise that go with it. This applies particularly to makers of stamping tools that conjure up tools and components with astonishing dexterity with the help of their erosion machines.

A complex stamping tool set with a drawing – a big challenge for the team and the machines.

High-precision stamping tools for extra-fine parts – the key to precision watches. FA10-VS and PA20 wire-cut EDM machines from Mitsubishi Electric are involved in the process.

The arc of the Jura mountains and particularly the French-speaking part is the traditional cradle of watchmaking. It is therefore hardly surprising that manufacturers of high-precision tools and individual parts can be found precisely in this region. Among them is Derwa SA belonging to Jacques Wermeille in Francophone Saignelégier. Customers wishing to visit his firm arrive on an idyllic high-altitude plateau in the Swiss Jura, where mainly horses can be seen grazing in rich green meadows dotted with fir trees – a perfect subject for a photograph. A region in which many Swiss people like to hike in summer and practise cross-country skiing in winter. But it is no accident that small firms have committed themselves to the high-precision production of parts precisely in this region, far from motorways and high-speed trains, because, in the arc of the Jura, the local watchmaking industry with its world-famous names is dependent on suppliers of precision components. And the latter need high-precision tools, such as those crafted by Derwa SA. This is why the region is also called the “Route de la Micromécanique” or “Road of Micromechanics”.

What so impresses me about these machines is their low maintenance and exceptional reliability.

The road to specialization

Having founded his firm Derwa SA in 1986, Jacques Wermeille devoted himself to general toolmaking, fabricating entire tools and stamping tools in particular. His customers’ interest in high-precision stamping tools prompted him to concentrate increasingly on the production of specific components for stamping tools, using electromagnetic discharge machining (EDM) exclusively for this. Finally, in 2006, he decided to confine his business entirely to this activity, placing his emphasis on the watchmaking industry. 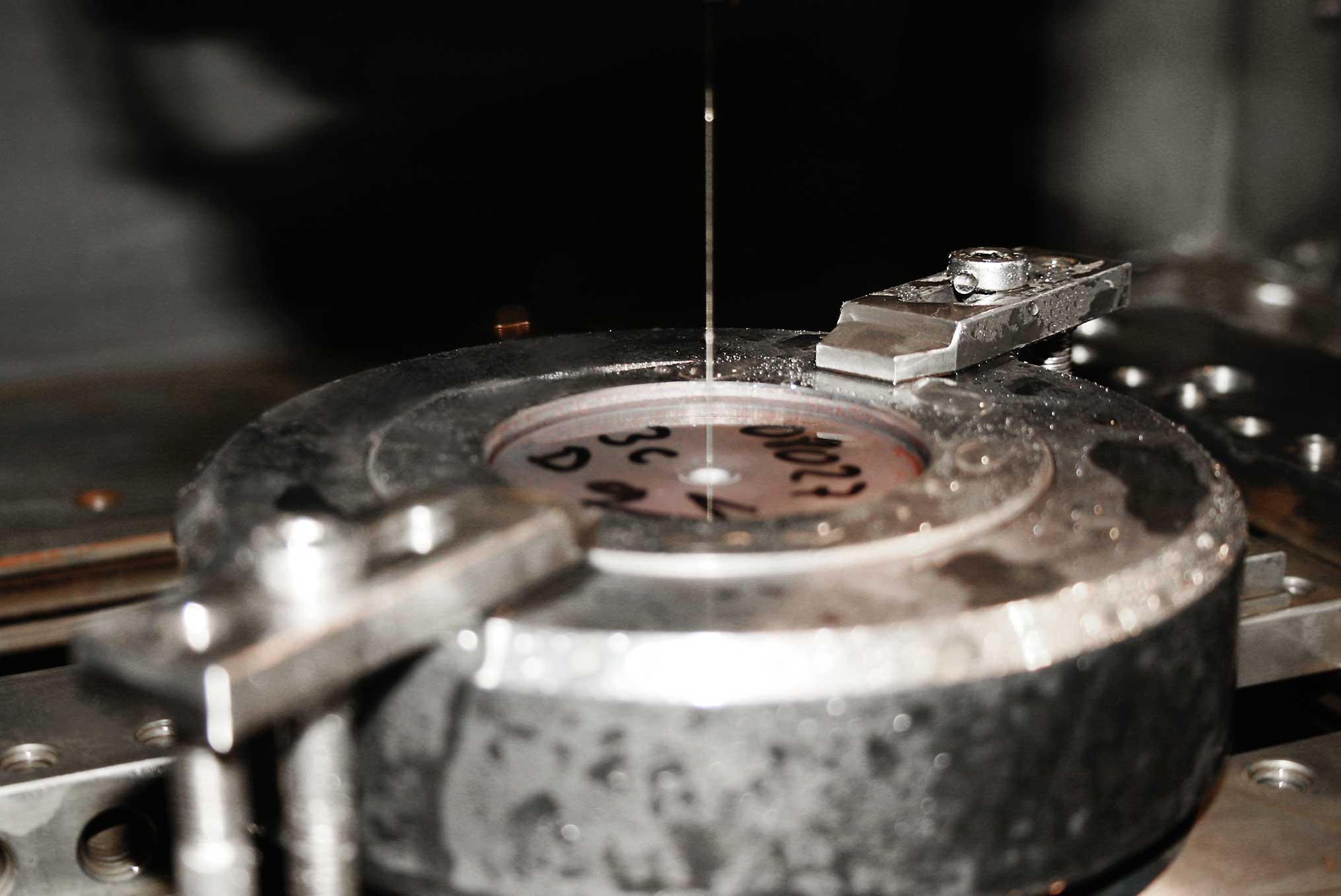 The tool being machined on the FA10-VS requires a special holder because there’s no other way of clamping the tiny workpiece.

Unlike EDM shops immediately upstream from production that machine the same or very similar components over and over again, Jacques Wermeille’s team is always being confronted with new tasks. “We receive data files from our customers, DXFs for instance. We then check them in our work preparation department and assign the specific parameters to them in a CNC program, before transferring them to the machine control.” This sounds much easier than it actually is. “Often we have to produce tools or parts for which we first have to find a feasible method.” This is where experience comes to the fore. Despite all the difficulties, “for the customer, quality and speed come top of the list, and these are second nature to us.”

To supplement his machine park, Jacques Wermeille soon needed an extra wire-cut EDM machine. When visiting companies doing similar work, including some in Germany, he was struck by the reliability and autonomy of machines from Mitsubishi Electric. Tests with sample parts showed that these machines satisfied his own performance profile. So he opted for a type FA10-VS wire erosion machine, the first wire-cutting machine from Mitsubishi Electric to be installed in his workshop. 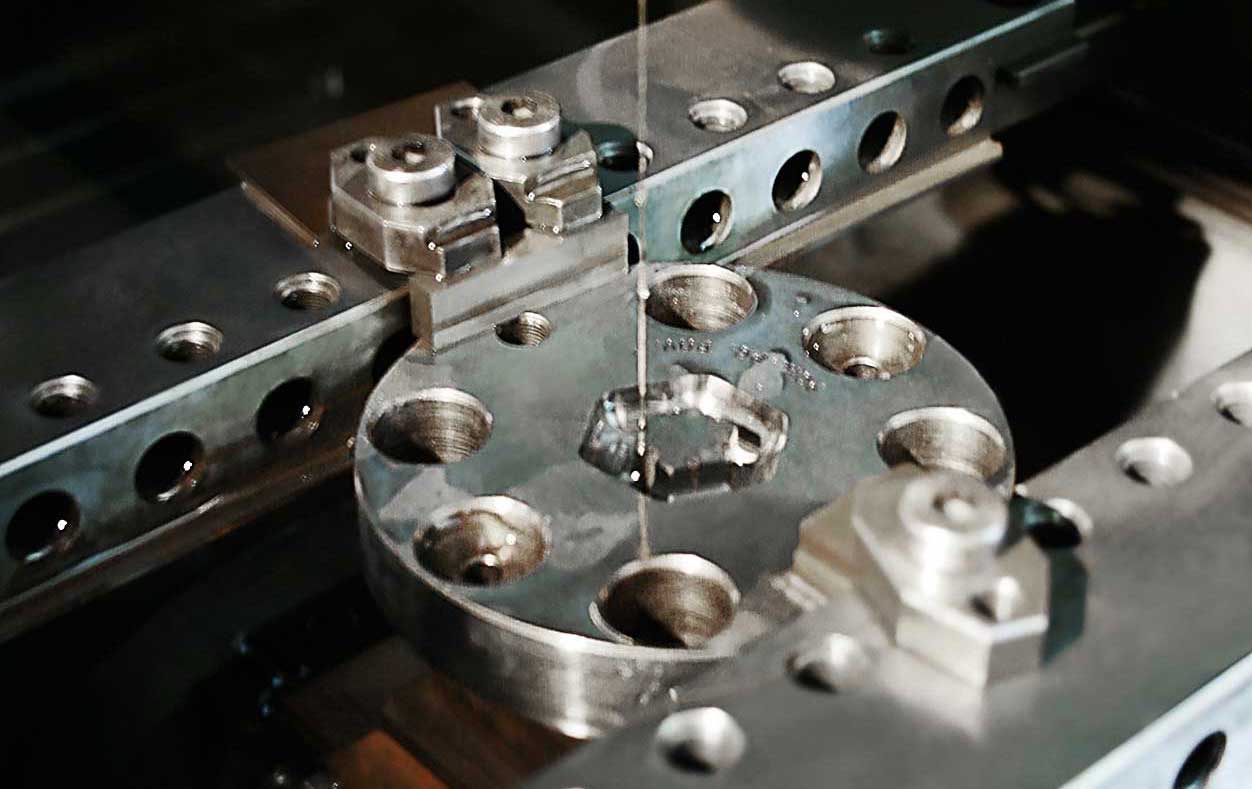 A small tool being machined on the PA20. Here again the workpiece (bottom) is carried by a special holder.

Jacques Wermeille is still convinced of having made the right choice: “We operate this machine with cutting wires with diameters of 0.07 to 0.25 mm. We use nothing but brass wire.” Brass wire has a very good price/performance ratio, he informs us, adding: “I am always pleasantly surprised at the high stan-dard of quality achieved by the erosion generator from Mitsubishi Electric in the cutting process with this wire – without having to compromise in any way.” This is true efficiency!

And this is not the only reason why he is so satisfied with this machine: “Threading with the only 0.07 mm wire is a very smooth process – simply astonishing,” he says. “It really saves time.” But first of all, he had to get to know the machine; this took the form an introduction on site immediately after commissioning.

Success wasn’t long in coming, and only a year later Wermeille had to extend his machine park with a wire-cut EDM machine yet again. “It was obvious to me that I would have to study the offer from Mitsubishi Electric first.” His choice this time was a PA20 model. “I am happy to use this machine for the cutting of small stamping tools with very high precision,” he explains. This is actually quite surprising, because, thanks to its unusual machining height, parts with a height of up to 300 mm could be processed on this machine. He is well aware of this: “It’s true that we mainly precision-machine small parts in the thousandth-of-a-millimetre range. All the same, however, we do sometimes have to machine tools of far greater size as well.” The PA20 has given him extra flexibility, which he is happy to exploit in his workshops.

What he values about the PA20, like the FA10-VS, is the quick and straightforward threading of the cutting wire. On this machine he also uses nothing but brass wire. “Thanks to the efficient EDM generator, good cutting perfor-mance is the rule with this wire,” says a satisfied Jacques Wermeille.

A helpful feature on both machines is that the access doors to the work space can be lowered for set-up – manually on the FA10-VS and powered on the PA20: “This really gives us a lot of room for manoeuvre when setting up the machine, and this translates into time savings – all of this without any loss of quality.”

If need be, around the clock

Jacques Wermeille usually fabricates tools for the stamping of small and tiny parts, as 75 per cent of his customers come from the Swiss watchmaking industry. “This is the reason why the machining times for a stamping tool in our business are usually relatively short,” he explains. Nevertheless, from time to time he lets the machine run practically unsupervised shiftwise or at weekends. This is necessary because his customers also include component suppliers to the mechanical engineering industry, medical technology and the automotive sector who often work with other tool sizes. “What so impresses me about these machines is their low maintenance and exceptional reliability.”

Jacques Wermeille has no doubts: “If I have to buy a new machine, I shall definitely include a Mitsubishi on my shortlist again.” 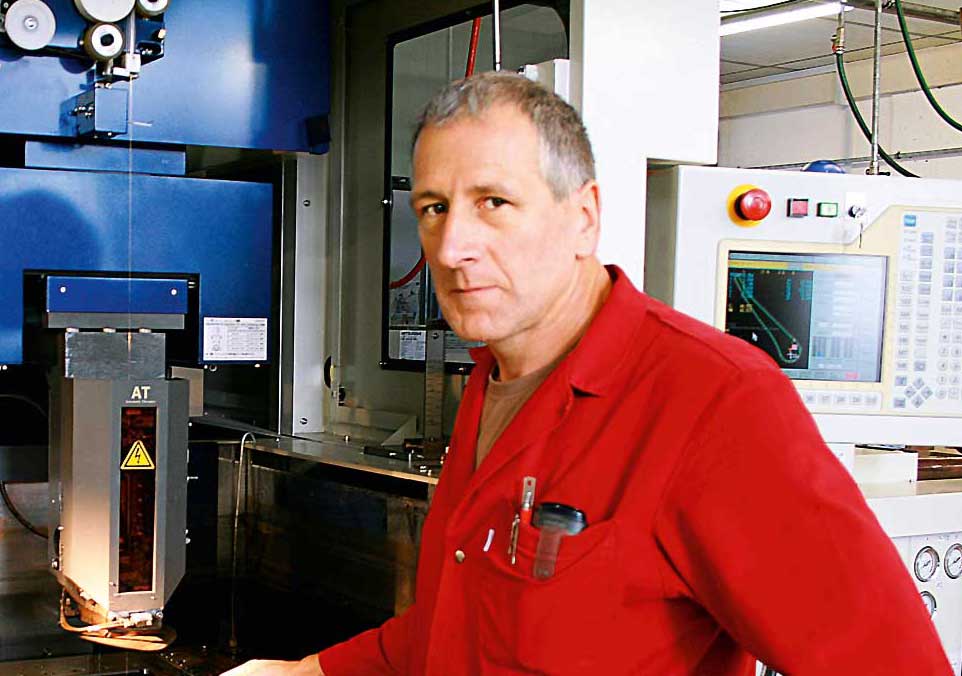 As a lad, Jacques Wermeille enjoyed tinkering with his moped – mechanics was evidently in his blood. This is echoed by his choice of profession. He did an apprenticeship as a stamping toolmaker, a trade that calls for neat, high-precision and absolutely dependable workmanship.

After a few years of gathering experience in various industrial firms, he took the plunge. He set up his own business in 1986 and built up a mechanical workshop for the fabrication of entire tool sets for stamping and fine stamping.

The market came to appreciate his experience of EDM machining. Their increasingly tough requirements encouraged Jacques Wermeille in 2006 to devote himself entirely to this technology and concentrate on the high-precision components of stamping tools. The fact that he soon had to purchase further machines is a vindication of this decision.

Married with two children, he likes to relax in his free time with jogging, cycling and motor cross. As an entrepreneur, he is convinced that his firm is now just the right size and has no plans to expand further. Satisfied with his four longstanding employees, all of them masters of their craft, he says, “It’s very difficult these days to find good skilled staff.”