First. Unique. Different. This is the slogan of Hublot. The fact that Hublot belongs to a special world is already evident from its picturesque location. Nyon lies on the shores of Lake Geneva, in which in calm weather the snow-capped peaks of the Alps are reflected. The site is home to assets worth millions in a handy format: Hublot wristwatches are top-of-the-range products of Swiss watchmaking, whose price range starts at CHF 7,000 and is in principle unlimited. 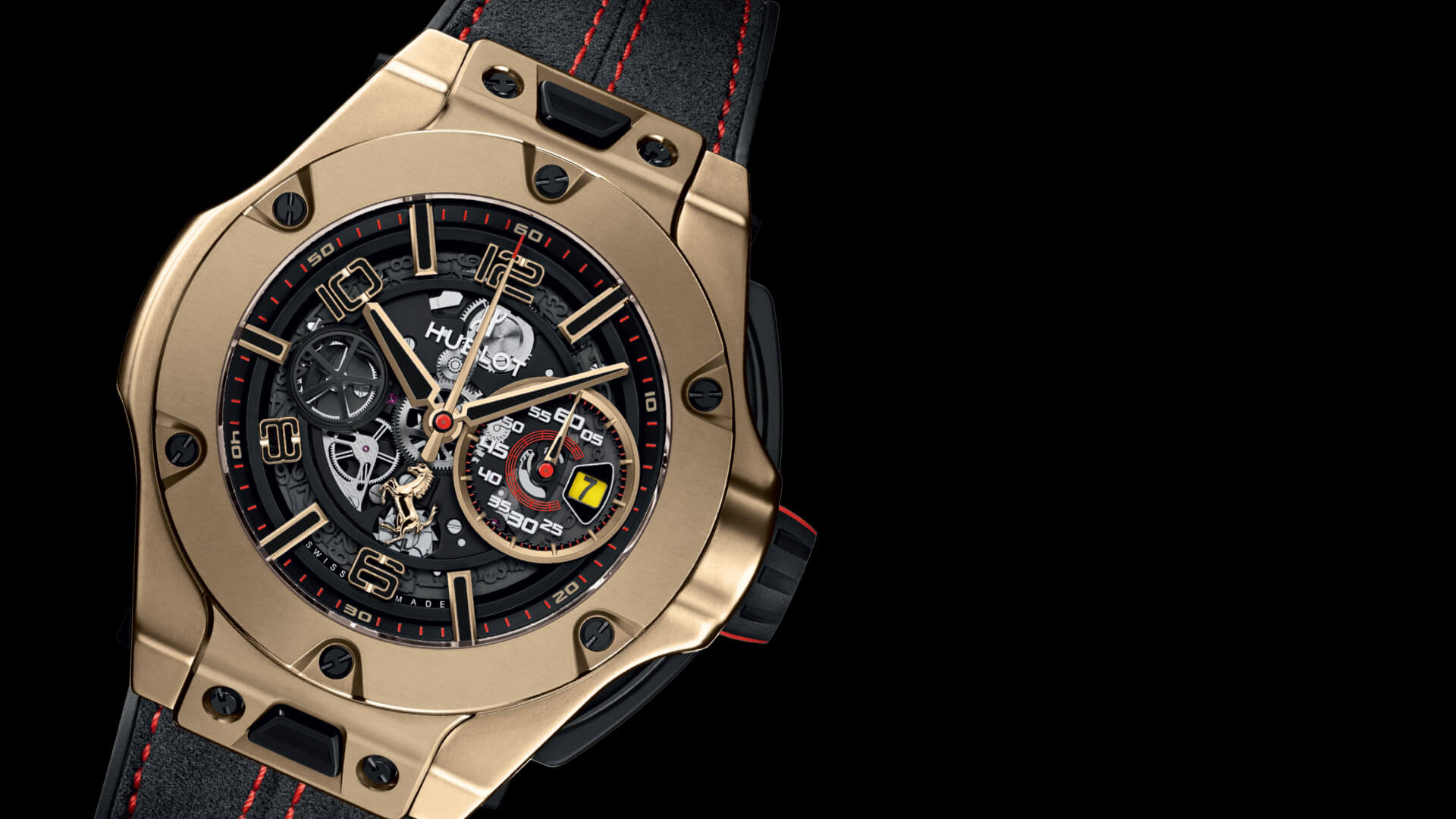 First. Unique. Different. This is the slogan of Hublot. The fact that Hublot belongs to a special world is already evident from its picturesque location. Nyon lies on the shores of Lake Geneva, in which in calm weather the snow-capped peaks of the Alps are reflected. The site is home to assets worth millions in a handy format: Hublot wristwatches are top-of-the-range products of Swiss watchmaking, whose price range starts at CHF 7,000 and is in principle unlimited. This is also where the most expensive Swiss watch to date, worth CHF 5 million, was manufactured. Mitsubishi Electric‘s electrical discharge machines in the production shops with a total area of more than 8000 m² have also contributed in the production of some of these iconic timepieces.

The Big Bang Ferrari Magic Gold with its tiny Ferrari logo, the cavallino rampante, was developed in close partnership with Ferrari.

On entering the reception area, the eye is immediately caught by large-format pictures underlining the bond between Hublot and its ambassadors. These include celebrities from the worlds of sport, art and music, as well as personalities from charities and environmental protection. Working closely with them, Hublot is constantly creating new watch models using high-tech materials and with unique designs. Thanks to its creative designers and innovative materials specialists, these timepieces in the typical Hublot style are available in an almost overwhelming variety of versions, often in limited editions and, thanks to the masters of the watchmaking craft, equipped with various ingenious technical features such as tourbillons or power reserves of up to 50 days. The ambassadors include such illustrious names as Pelé, Usain Bolt, Kylian Mbappé, José Mourinho, Bar Refaeli and Chelsea FC. But one well-known company name also stands out in the list: Ferrari, the legendary sports car from Maranello. 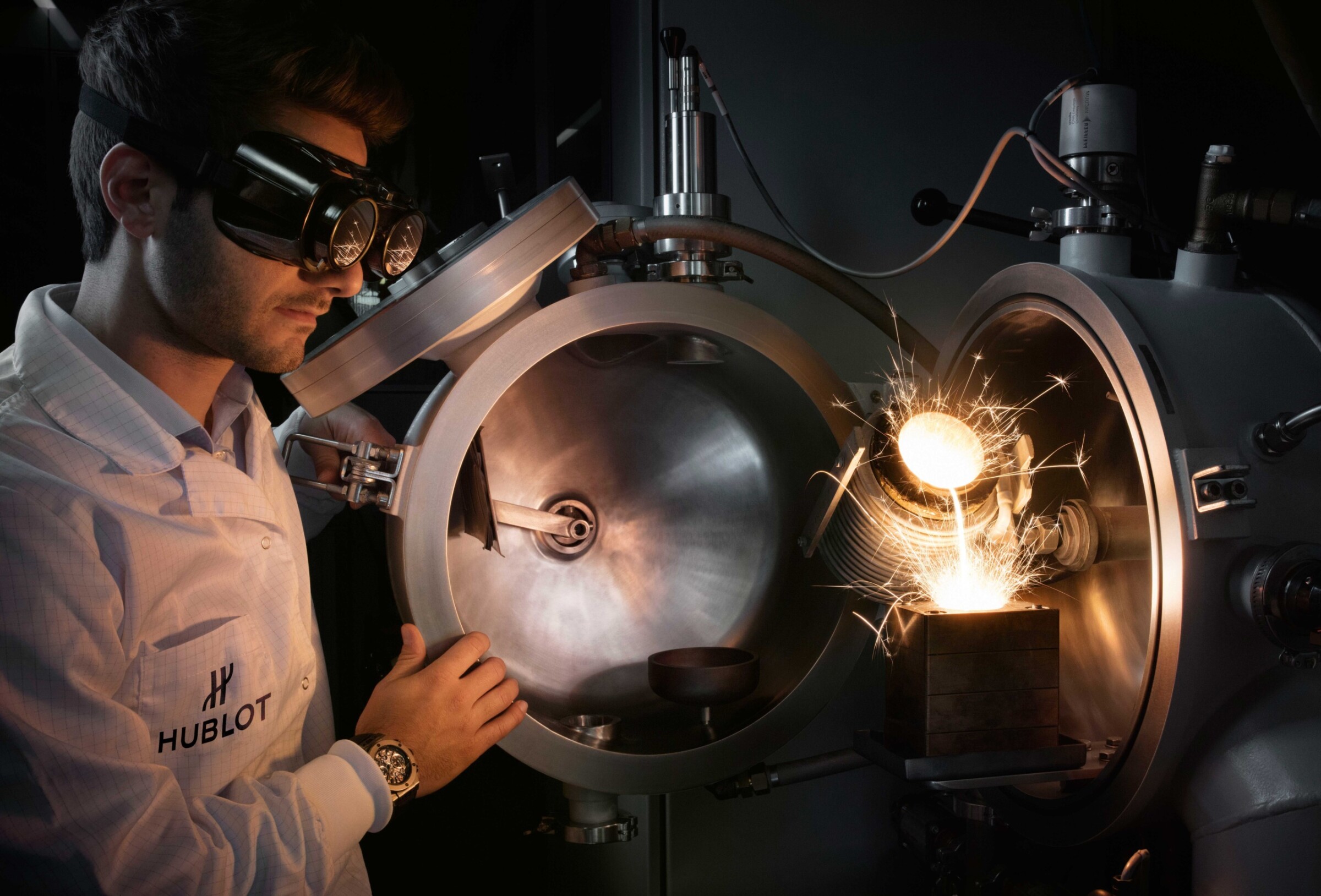 The watchmaker is constantly on the lookout for new materials for his timepieces.

Hublot and Ferrari as natural partners

Hublot and Ferrari have much in common: you don‘t buy a Hublot watch because it tells the time more accurately than a mobile phone, and you don‘t drive a Ferrari on the in most cases speed-limited European motorways to be faster than other drivers. Instead, buyers choose these products for lifestyle reasons and also in order to enter the «family» of these brands (Hublotistas and Ferraristas). Manufactured with tradition and a great deal of craftsmanship, they are elevated to a standard that mass products cannot match. Buyers make their choice with greater deliberation on the strength of the products’ beauty, aesthetics, progressiveness and crafted perfection. It therefore comes as no surprise that Hublot and Ferrari have been working in close partnership since 2011 to create watches that combine innovation, excellence and performance at the highest level. The first of these models, called Big Bang Ferrari Magic Gold, was launched in 2012, and one of the special features of its development was the use of a new, patented composite material made of ultra-hard sintered boron carbide ceramic and 18-carat gold. Unlike gold as a metal, which is soft in any alloy and therefore easily scratched, this matt-gold dark material is extremely hard thanks to the boron carbide and scratch-resistant. The drawback, however, is that it is also extremely difficult to machine. All the same, Hublot chanced its hand with this project and successfully mastered the challenge. This success in turn marked the beginning of a story culminating in what are now four Mitsubishi Electric EDM systems in Hublot‘s production facilities: one MV1200R, two MX600 and one Start 43Ci EDM drilling machine. But first things first. 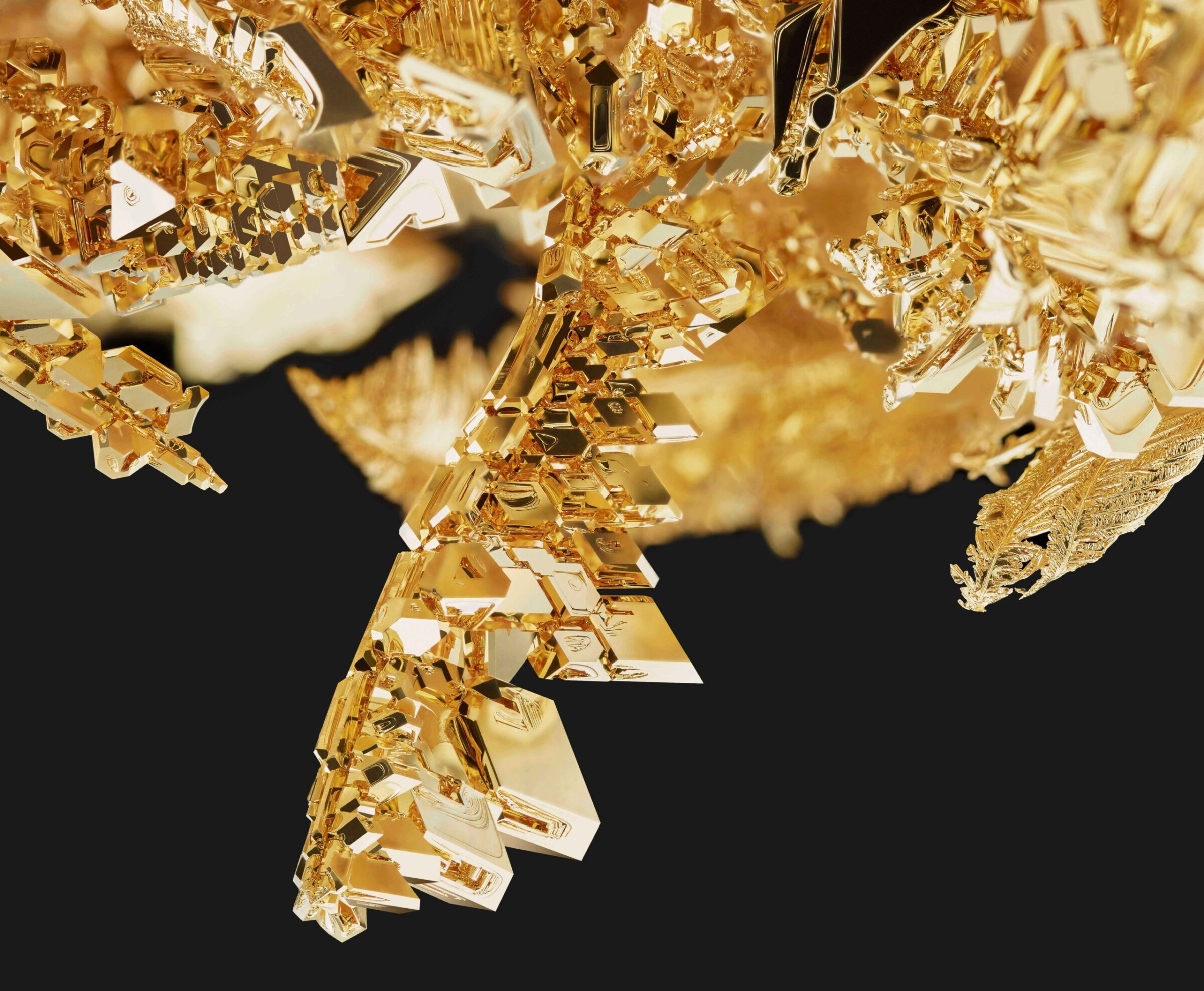 Magic Gold. Developed and crafted by Hublot in the company’s own metallurgical department. The world’s first and only scratch-resistant 18-carat gold alloy.

Hublot‘s strength is based on its distinct identity – the art of fusion – this unique ability to create timepieces that combine tradition and innovation.

Constant innovation – in the materials sector as well

„Hublot‘s strength is based on its distinct identity – the art of fusion – this unique ability to create timepieces that combine tradition and innovation,“ is how Ricardo Guadalupe, the company CEO, sums up the manufacturer‘s philosophy. This applies not only to the multitude of different models and versions constantly being created by its designers, but also to the wide range of materials used. These include not only such familiar materials as stainless steel, aluminium and titanium, but also such precious metals as gold, platinum and palladium as well as exotic metals like tantalum, tungsten, zirconium and osmium. As an alternative to metals, ceramic, carbon fibre and rubber are also used. Incidentally, the term „fusion“ also has to do with the fact that Hublot, as part of its research and development activities, operates its own metallurgy department with a foundry enabling the watch manufacturer to develop and produce the desired materials itself. 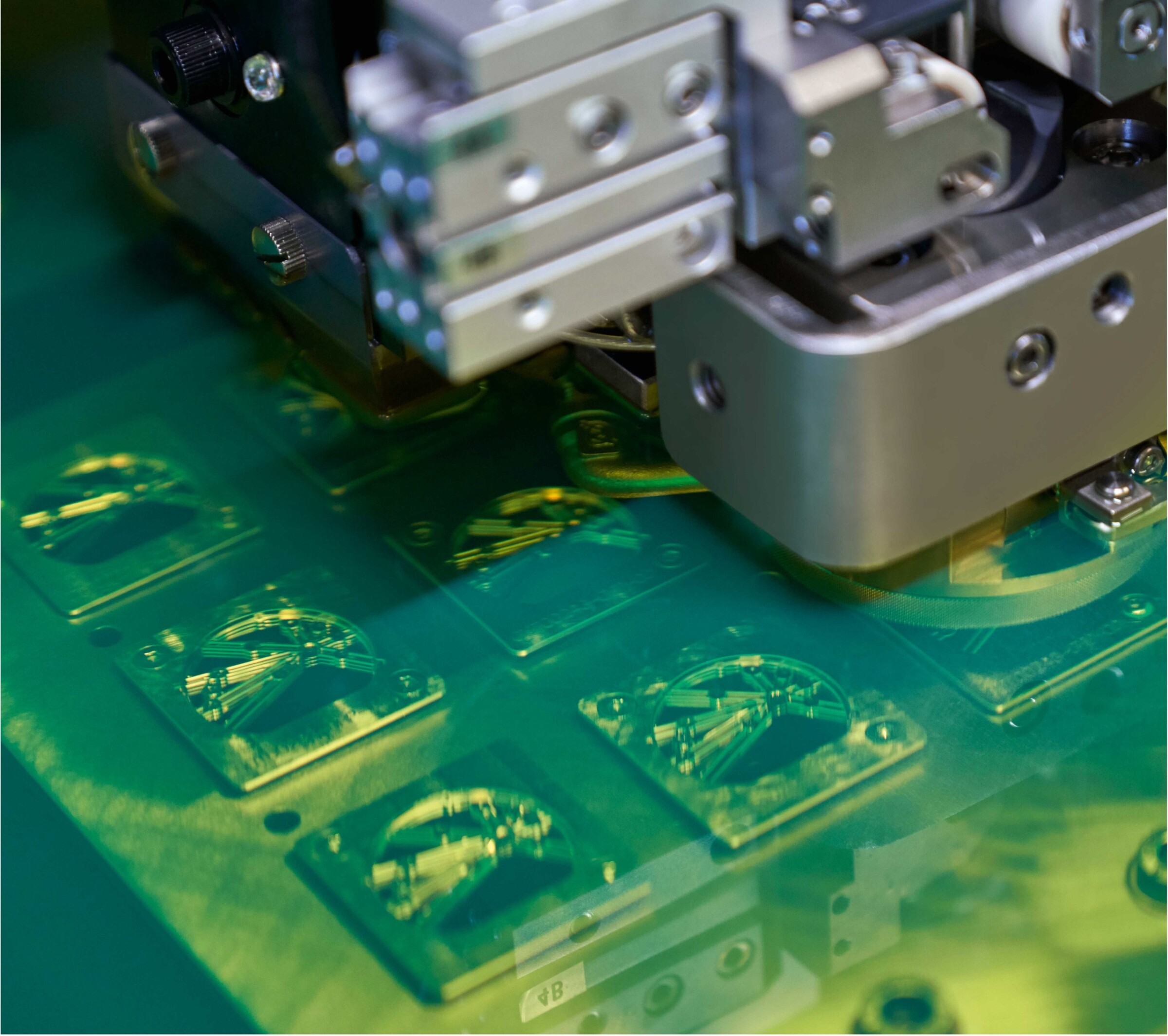 „My department has to supply the watchmakers with individual parts that meet the highest quality standards,“ is how Production Manager José Almeida describes his area of responsibility. State-of-the-art technology is used for this purpose, because the watchmakers who later assemble the movements by hand from hundreds of individual parts with meticulous care must be able to rely totally on the quality of these components. Dozens of high-precision automated milling, drilling, turning and electrical discharge machines are lined up in production, producing small to tiny components, often with very complicated shapes, for the assembly of watch movements and cases. This combination of modern industrial production methods for the manufacture of individual parts with the traditional, entirely manual watchmaking craft is also an expression of Hublot‘s specific „fusion“ philosophy, the creative blending of tradition and innovation. Another machining process is wire-cut EDM, which is used especially for components that cannot be milled owing to their extreme hardness or clamping problems. EDM is also frequently used for the production of small series or prototype components, as no complex clamping devices or special tools are required for this. In view of Hublot‘s commitment to innovation, this is of considerable importance. 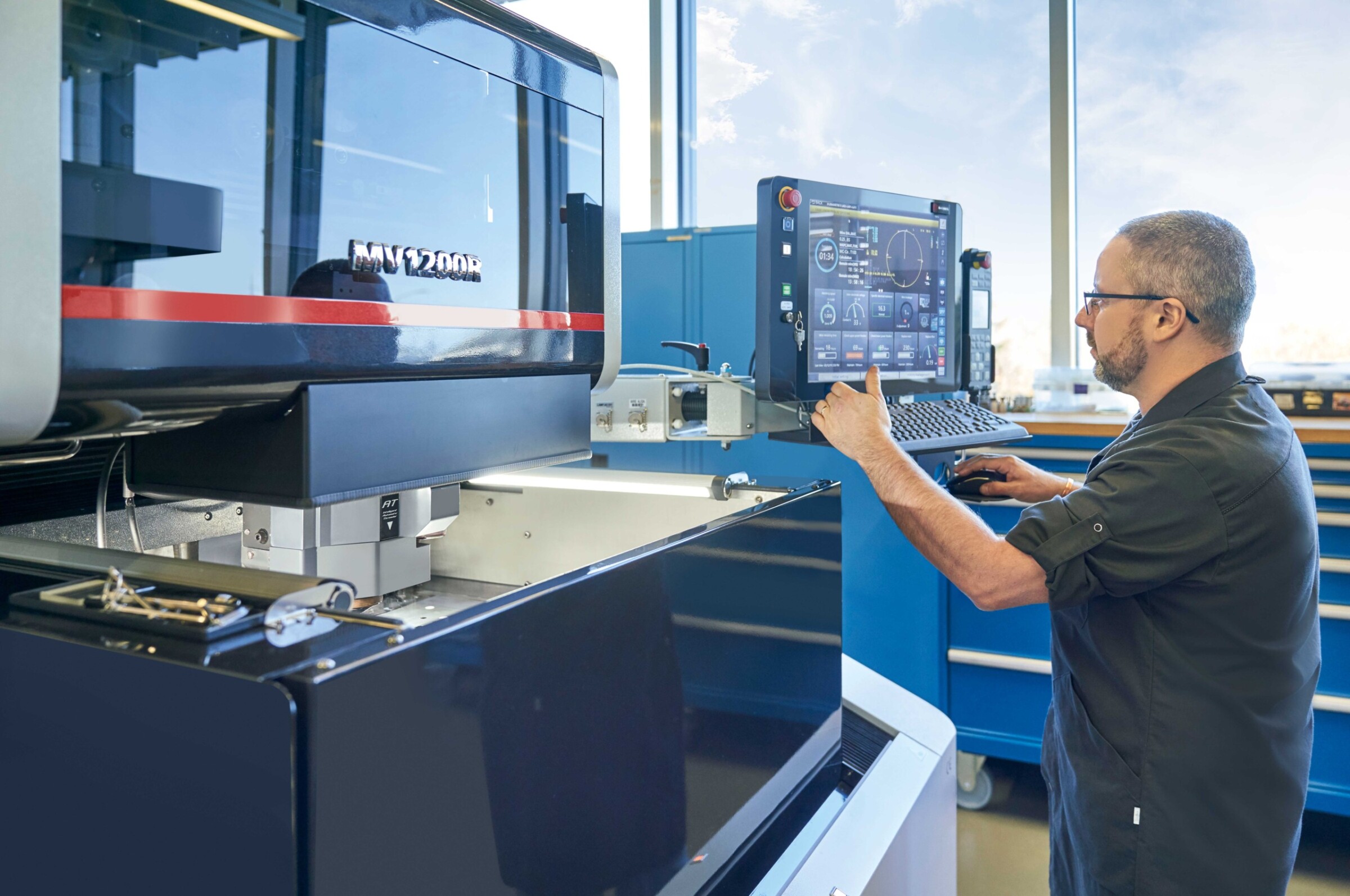 With its Mitsubishi Electric MV1200R, Hublot succeeded in making considerable progress in the machining of its globally unique material “Magic Gold”.

Mitsubishi Electric steps into the breach

„Because of its extreme hardness of 1200 HV, Magic Gold can only be cut or drilled by electrical discharge,“ Almeida adds. The company contacted Mitsubishi Electric. The initial advice given proved to be excellent, and, in addition, Mitsubishi Electric generously provided Hublot with an MV1200R water bath machine as a test system for several months. And not only that: engineers were also sent to Hublot for several days to assist with the tests. In the course of three months of joint development work, all problems were satisfactorily solved and the procedure for the task was validated. For Hublot, quality and productivity improved significantly over the previous state of affairs, and Mitsubishi Electric succeeded in acquiring an attractive customer. All in all, a fine example of benefits all round. 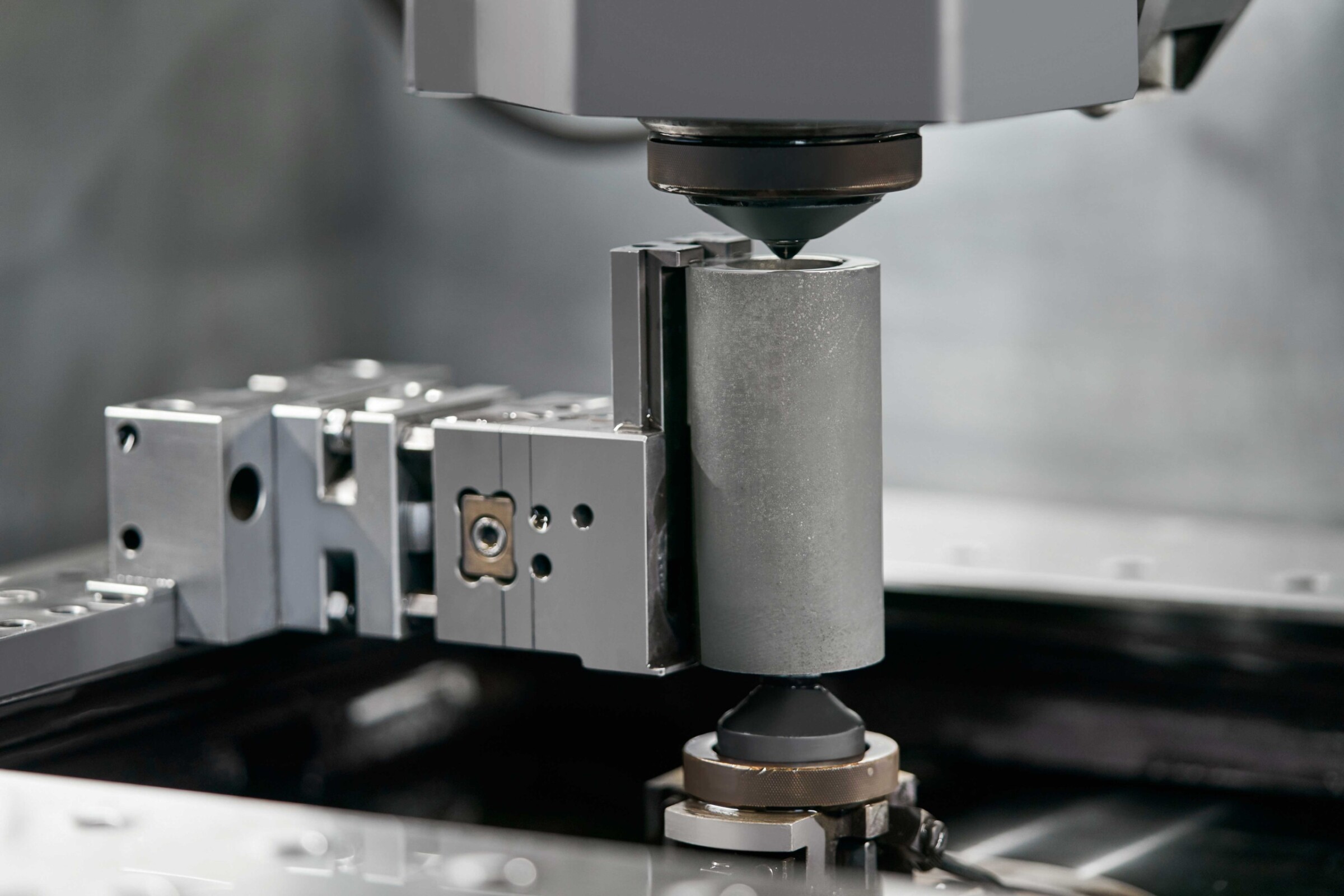 1.5 to 2 kg of 18-carat gold goes into such a Magic Gold blank, depending on the version.

„After this achievement, it was only natural for us to also talk to Mitsubishi Electric when the two outdated oil bath machines were taken out of service,“ Almeida recalls. These machines are mainly used for materials that are used in watch movements. These include steels that would be at risk of rusting in a water bath. Other materials used in this area are brass, copper-beryllium and carbides. In addition to watch movement parts, the oil bath machines are also partly used to machine jigs and fixtures. 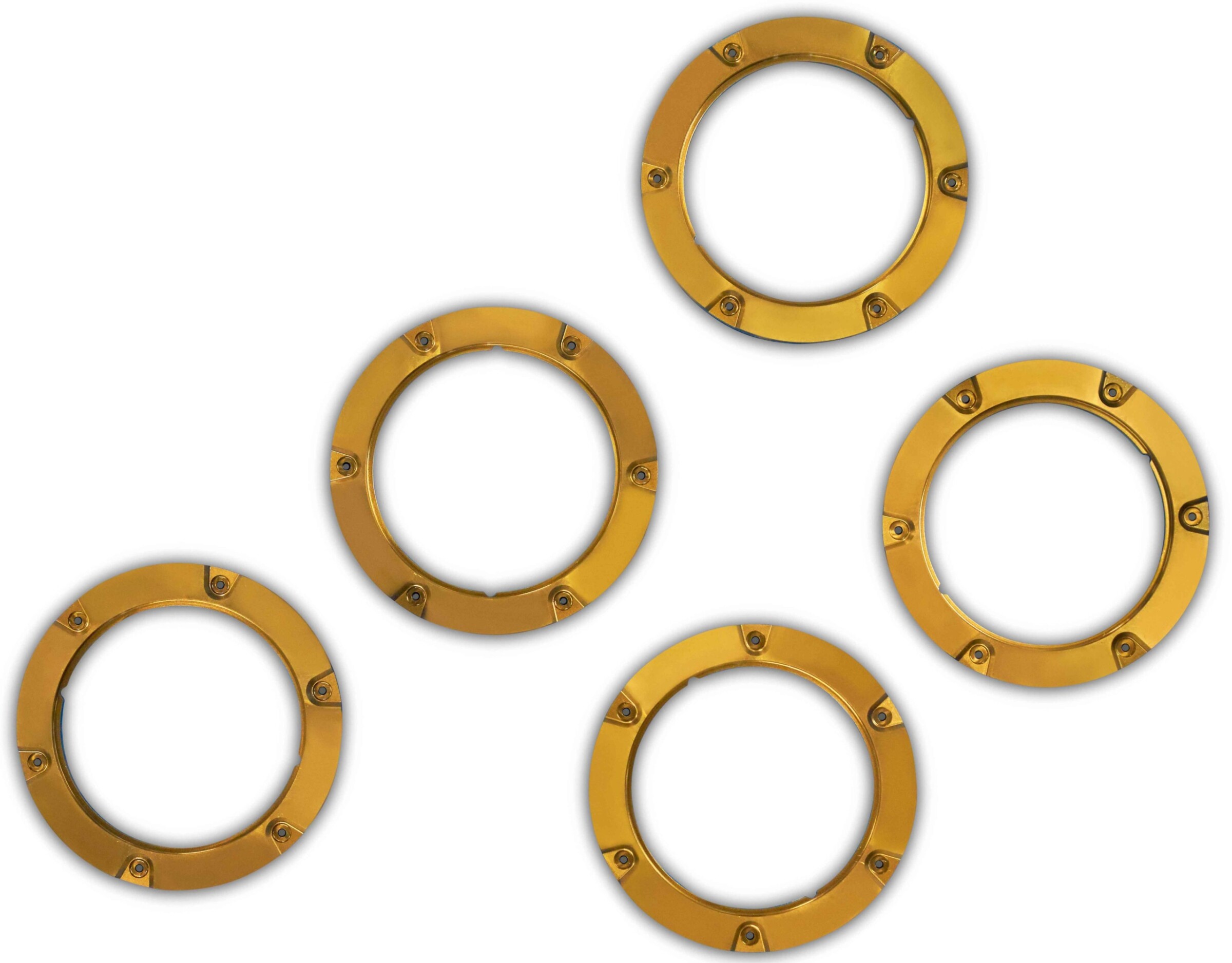 The machined case parts of Magic Gold shimmering in a warm golden brown.

From the church tower clock to the pocket watch.

In a comparison with different suppliers, the machines’ ability to take changing material thicknesses into account during the cutting process proved to be the decisive criterion. In coping with sudden changes in material thickness – such as those that occur with pre-milled components – the Mitsubishi Electric systems proved superior. In the Hublot workshop, two MX600 oil bath machines are now also gently humming alongside the MV1200R. 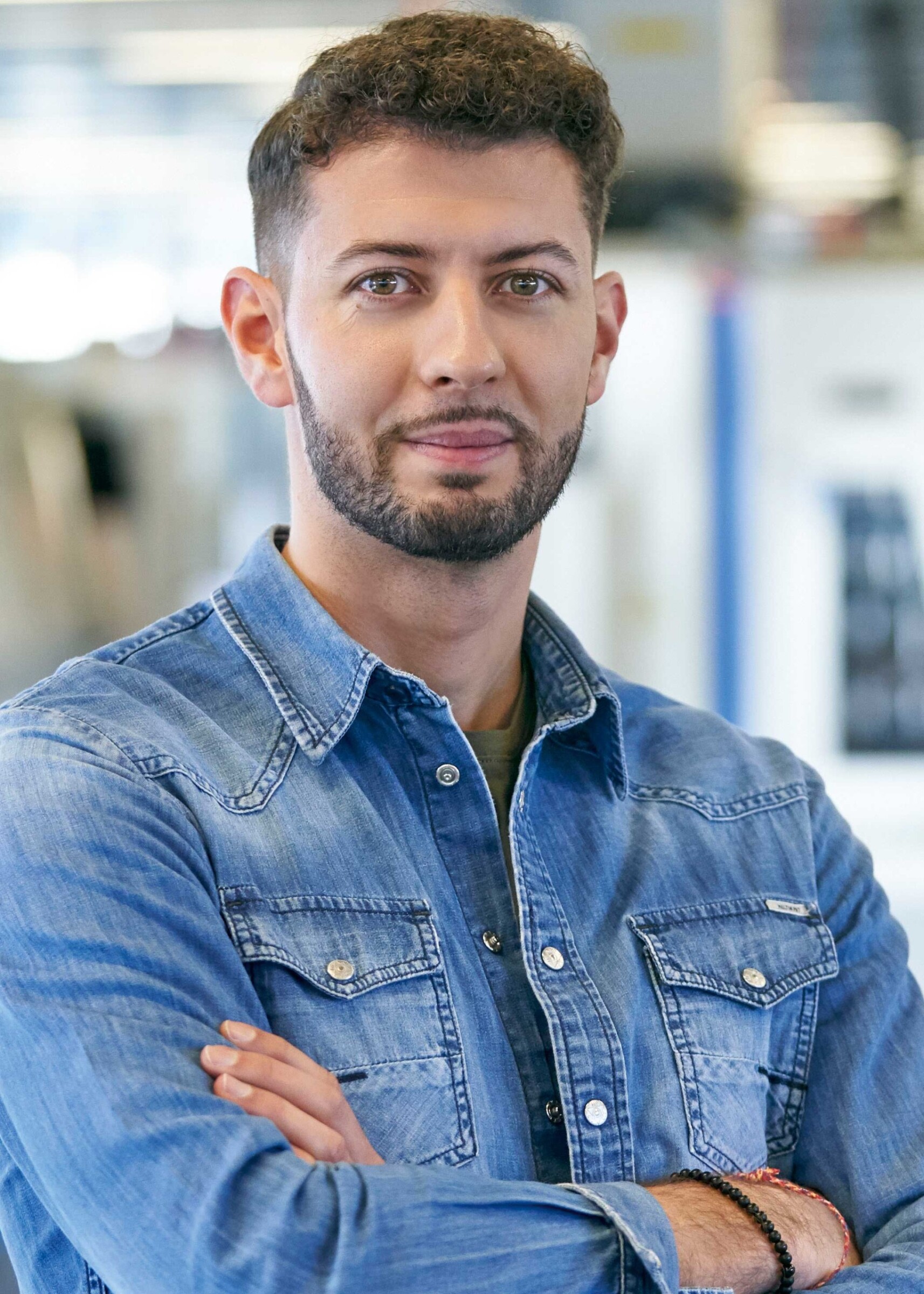 Mitsubishi gave us excellent advice, made a test system available for several months and sent its engineers round for the tests.

HUBLOT is a Swiss luxury watchmaker headquartered in Nyon. Founded in 1980, the company is known for its innovative approach resulting from the unique marriage of gold and rubber in the „Art of Fusion“. The birth of the legendary „Big Bang“ model in 2005 has been restaged several times, opening the way to new flagship collections (Classic Fusion, Spirit of Big Bang) with complications ranging from simple to extremely challenging. This spirit of innovation typifies the exceptional DNA of this rapidly growing Swiss watchmaker.

Such minuscule components for the movements are machined in the production department.

Keen to preserve its traditional high standard of expertise, the Swiss watchmaker is guided by its philosophy of „Be the First, Different and Unique“ and proves with its innovation in materials (Magic Gold = scratch-resistant gold, bright and colourful ceramics, sapphire) as well as its manufacture of movements (Unico, Meca-10, Tourbillon) that it is continuously at the forefront in its field. On the knife-edge between past and present, luxury watch manufacturer HUBLOT has its sights set on a visionary future: its symbiosis with the great events of our time (FIFA World Cup, UEFA Champions League, UEFA EURO and Ferrari) and their most outstanding ambassadors (Kylian Mbappé, Usain Bolt, Pelé). 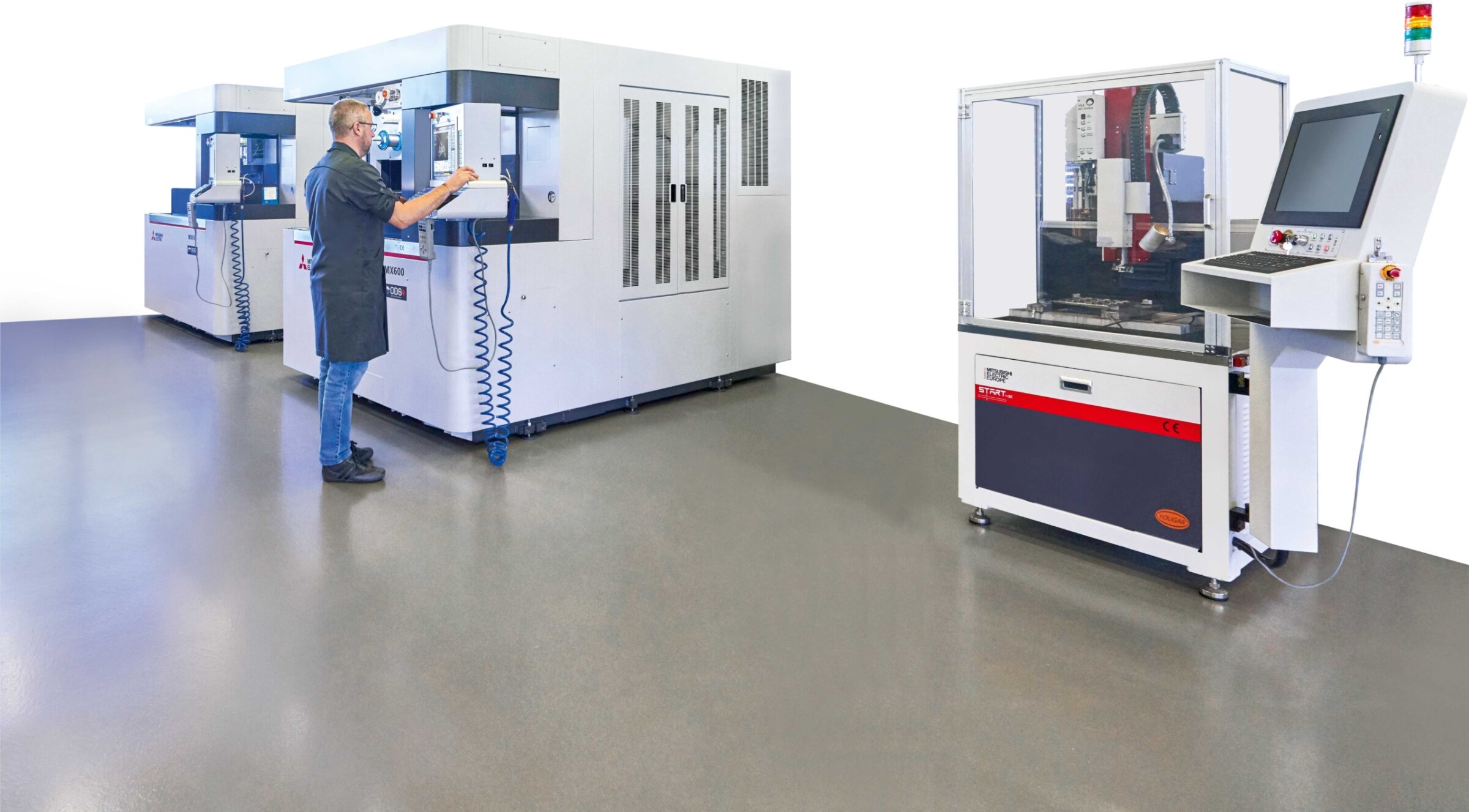 Hublot: Swiss watches in a class of their own

When it comes to Swiss timepieces, one usually thinks of wristwatches – but this is a fairly modern development, as the first watch was not produced until 1810. The Swiss clockmaking tradition, on the other hand, is already around 500 years old. The reformer Calvin, obsessed with punctuality, attracted numerous Huguenots, masters of the art of timekeeping, from France to Geneva. The zealous reformer gave the industry another major boost by banning the wearing of jewellery. The local goldsmiths had to adapt and switched to the production of decorative timepieces. From Geneva, this art quickly spread throughout the entire Jura mountain range. Initially, the product range extended from church clocks to pocket watches. According to entries in the Breguet company archives, the first wristwatch mentioned above was not made until 1810 by Abraham-Louis Breguet for the Queen of Naples. The first waterproof wristwatch was then crafted by Rolex in the 1920s. This was followed in 1926 by the first automatic watch from a manufacturer based in Grenchen in the canton of Solothurn. Probably the most complex watch artwork ever produced is the Calibre 89 by Patek Philippe, which consists of a total of 1728 parts. 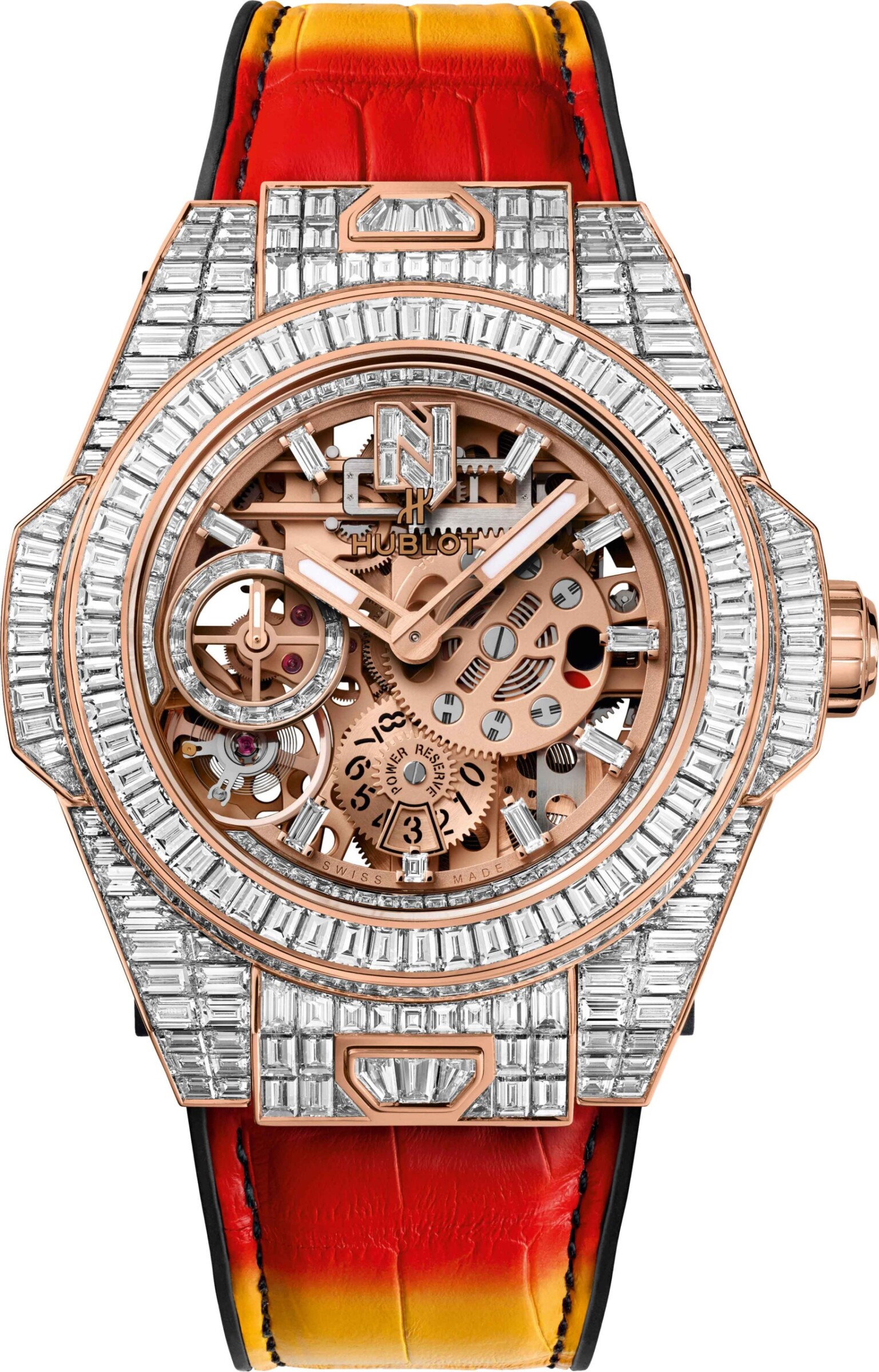 The industry made an almost fatal mistake when it invented the quartz watch. Although the first quartz watch was developed in 1967 at the Centre Electronique Horloger (CEH) in Neuchâtel, the market was left mainly to Japan and the USA, bringing the Swiss watch industry almost to the brink of collapse in the mid-1970s. Today, it has regained its footing, achieving export revenue of almost CHF 20 billion in 2017.

Core business:
Hublot with its headquarters in Nyon is a Swiss maker of luxury watches. Today, its watches are among the most expensive and exclusive in the world – with its USD 5 million watch, for example, Hublot holds the record for the world‘s most expensive watch. Like the luxury watchmaker Tag Heuer, the company belongs to the French group Moët Hennessy Louis ­Vuitton S.A. (LVMH).