Whenever particularly complex tools have to be machined, the workforce of K+S GmbH Modell- und Formenbau is in its element. The reason for this is its vast expertise in terms of machining methods and materials and also in terms of modern machine tools. The latest addition to the machine park is the Mitsubishi Electric FA50-S Advance V that is now opening up new ­opportunities.

Whenever particularly complex tools have to be machined, the workforce of K+S GmbH Modell- und Formenbau is in its element. The reason for this is its vast expertise in terms of machining methods and materials and also in terms of modern machine tools. The latest addition to the machine park is the Mitsubishi Electric FA50-S Advance V that is now opening up new ­opportunities.

The reason for Kuhn’s choice of a Mitsubishi Electric machine was the good reputation of the company’s technical service.

When you enter the premises of K+S Modell- und Formenbau, you can’t help being surprised. In the foyer of the modern ­industrial building stands a huge, round bathtub from Hansgrohe that you’re normally more likely to find in glossy brochures. Rudolf Kuhn, Managing Director of the company in Waghäusel, Baden, makes such flights of designer fantasy come true with the aid of down-to-earth machining methods. Previously, bathtubs of this size were simplytoo heavy (up to 600 kg) and didn’t sell well. The example in the foyer, on the other hand, weighs only 75 kg and sales have taken off. “We have always been in demand as a problem-solver. Having made little headway with conventional ­mineral casting methods, it only took us a year to come up with a special ­machining process, the tools and the associated surface treatment for this exclusive bathtub,” says Kuhn describing the process. However, the production of bathtubs and series of fittings is just one source of work of the medium-size enterprise. For over 20 years, it has been a dependable supplier to leading companies in the automotive component supply, aerospace and sanitary ware industry. The production range extends from CAD and NC programming via the production of a huge diversity of ­production tools and fixtures through to the production of prototypes and small and medium series using a variety of fabrication methods. 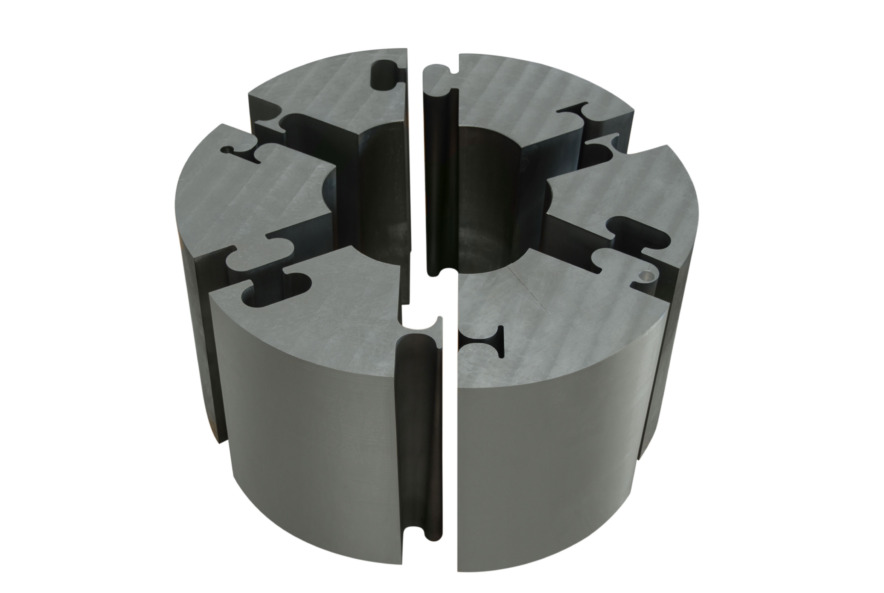 The blank is for an RTM core for the “carbon-fibre aircraft wheel rim” development project, here after 5-axis wire-cutting.

A factor for success has been the development of production methods that at first glance are not so easy to realise. Kuhn’s team concentrates on the development of tools and fixtures for prototypes, and pilot-series and series parts such as battery covers for electric vehicles, inner linings of aircraft, cabin roofs for combine harvesters and tractors, vehicle interior parts and engine compartment shielding. 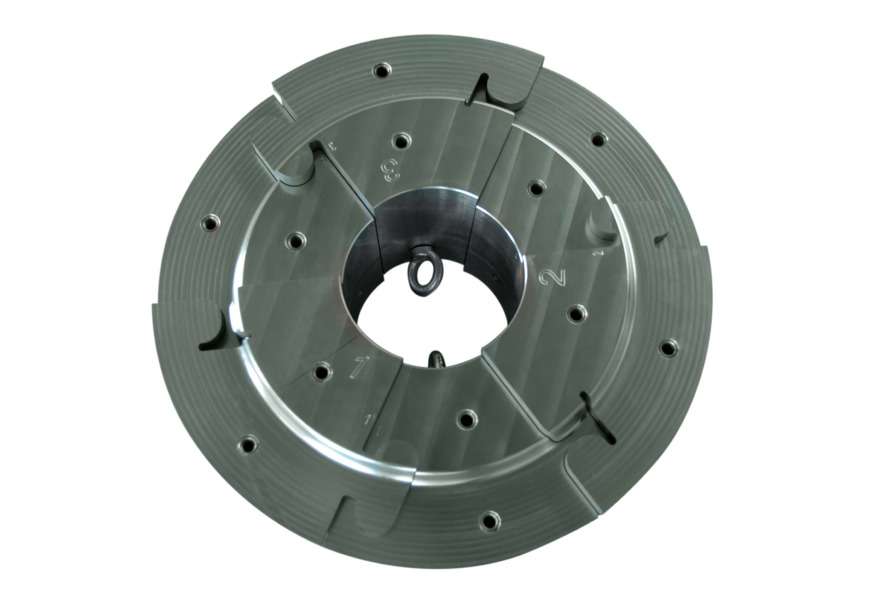 Underside of the core after milling.

The company first ventured into EDM four years ago with the development of a stamping press for the production of heat shields for underbody panels in cars. All vehicles have a variety of plastic trim linings that are reinforced in places with preshaped metal panels. This serves as a heat shield or is used for noise damping. “Technically speaking, these panels are very difficult to stamp, as they are very thin – usually 0.1 to 0.2 mm thick,” Kuhn explains. The production of a suitable press posed a special challenge. The rule of thumb in stamping is that the cut should not be wider than 10 per cent of the material’s thickness. This means a cut 1 to 2 hundreds of a millimetre wide. “First we tried milling the press. But as the material is hardened, this wasn’t so easy,” Kuhn recalls. To achieve the necessary accuracy, the presses were reluctantly sent to an EDM jobshop. This was an unaccustomed situation for the company, as it prefers to handle all the tasks itself.

As orders continued to grow, Kuhn was faced with a decision: “Should we invest in another 5-axis milling machine or in an EDM?” The decision went in favour of a wire-cut erosion machine, even though – as Kuhn frankly admits – they hadn’t had much experience with this technology. “It was ultimately our experience with the EDM jobshop that tipped the scales,” says Kuhn explaining his introduction of this form of machining. It had been difficult to find an EDM ­specialist who could meet the company’s quality standards and also operated ­machines with large workspaces. “In Germany we found just one – for milling work, there’s plenty of ­capacity, however,” says Kuhn. 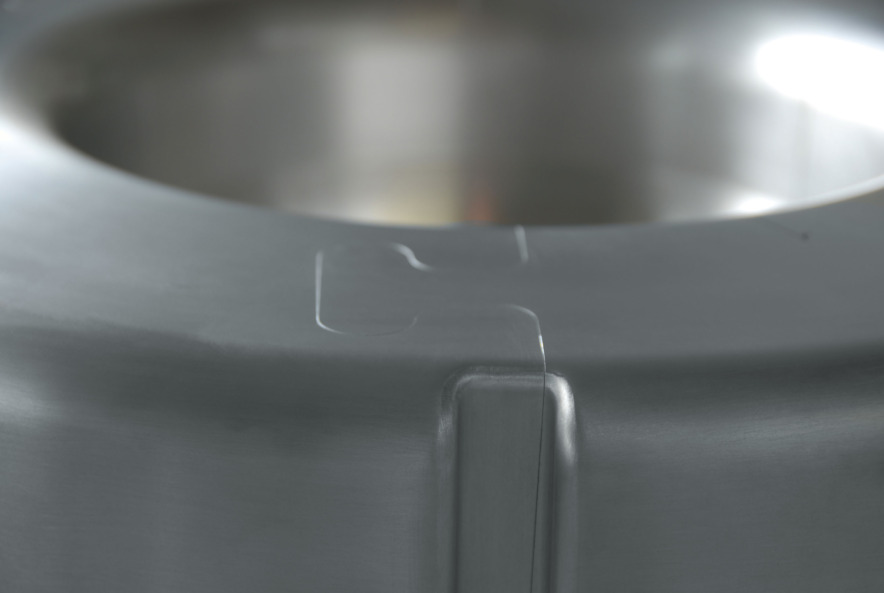 Detail of the mould contour on the assembled core.

Kuhn then visited the EMO to find out about EDMs and chose the Mitsubishi Electric FA50-S Advance V. The reasons for this were not only the technology, but also the good reputation of the company’s technical service. “For me, this is almost more important than the running costs,” says Kuhn, who almost regrets not having put Mitsubishi Electric to the test in this area yet because he simply hasn’t needed to. Another positive feature is that attractive financing options are available from the KfW Bank because the FA50-S Advance V is so much more energy-efficient than its predecessor. The only drawback was having to wait six months for delivery even though they had already received their first order. The wait was bridged by Mitsubishi Electric with the provision of a slightly smaller replacement machine for this interim phase. The transition period was exploited for familiarising two employees. “The training was outstanding, so we were able to get down to work straightaway,” Kuhn explains. It was the experience during this period that vindicated their decision in favour of Mitsubishi Electric. The very first job involved a workpiece whose size pushed the smaller replacement machine to its limits. “I’d rather invest in a size bigger so I’m equipped for all eventualities than turn down a job,” Kuhn insists. With a machining range of 1,300 x 1,000 x 400 mm and maximum workpiece dimensions of 2,000 x 1,700 x 390 mm, the FA50-S Advance V is one of the biggest wire-cut EDMs currently on the market. The new machine was finally supplied after six months and installed on site within a week. The Mitsubishi Electric FA50-S Advance V wire erosion machine was ready to go. The device for large spools of wire and a telephone module were added as special equipment so that the responsible employee can be notified of a machine stoppage by text message. The machine has been in operation for a wide range of assignments since May 2014. 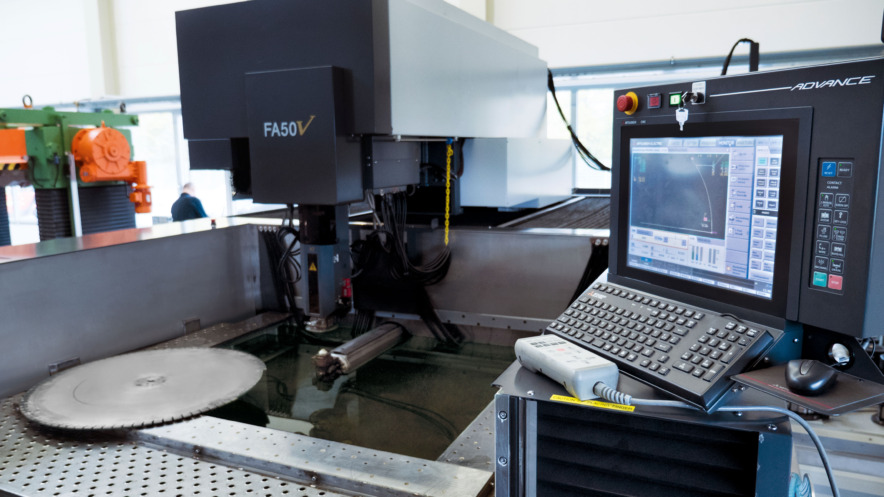 The home of utopian bathtubs.

The new EDM is mainly used for the machining of stamping presses of high-alloy tool steel and has meanwhile almost replaced milling for this application. “We’re now able to produce the die geometries of the stamping presses in the µm range and with superlative surface finishes ourselves,” says Kuhn outlining the main task. “The dies cut on the machine are a 100 per cent fit. After milling, we’d often found during assembly that certain areas didn’t fit and had to be reworked.” The EDM is also used for producing test tools for these panels. “There really isn’t any good simulation tool for ­forming tests, particularly if the panels are domed and perforated to reduce noise. Any of these holes can later tear,” Kuhn stresses. Hot-sealing tools to connect the aluminium shielding panels to the plastic are already being produced on the new machine. 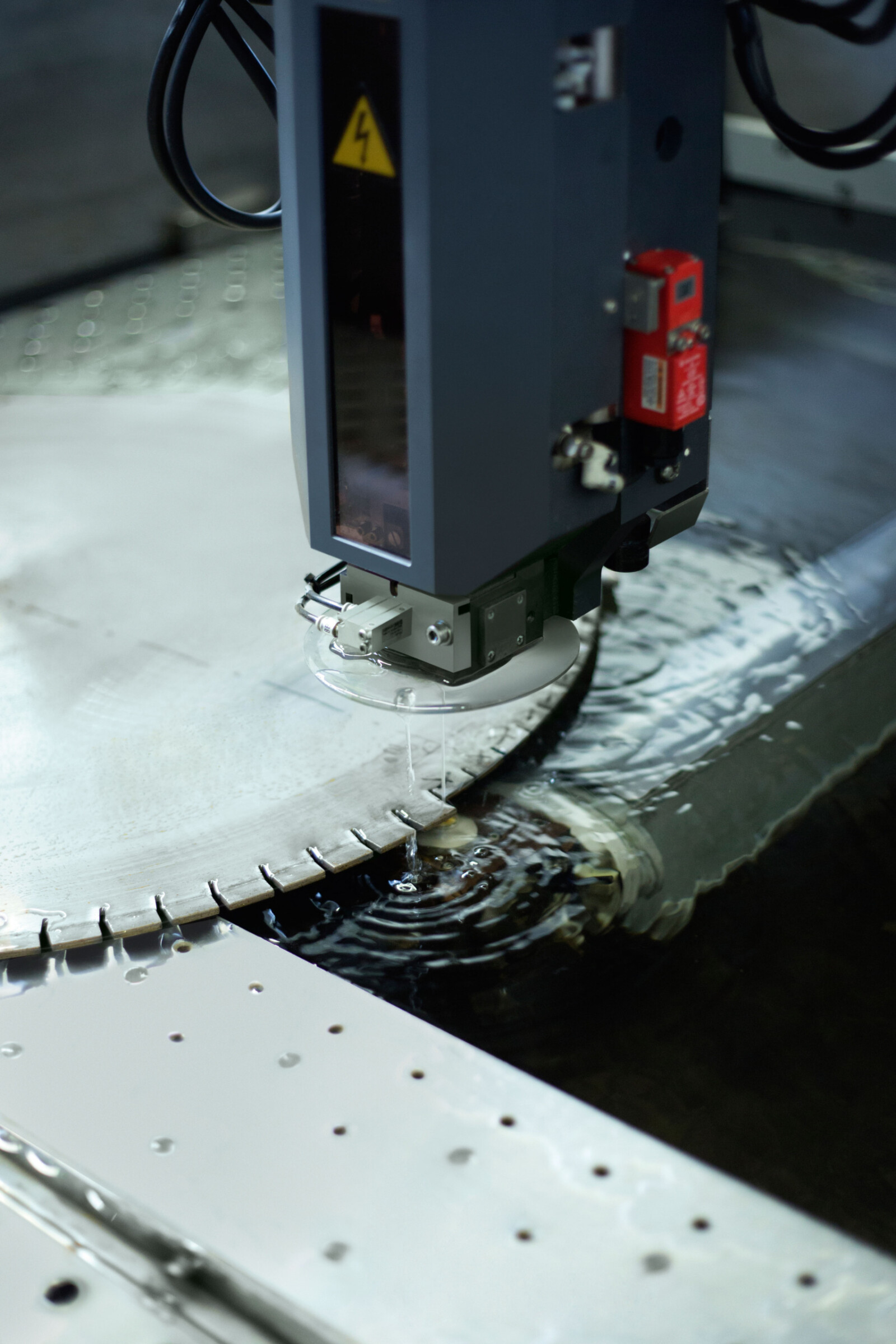 A source of superlative surface finish.

Kuhn is convinced that there is still plenty of unexplored potential in the new machine. In addition to the production of stamping tools, the company has now used the FA50-S Advance V for developing an RTM (Resin Transfer Moulding) mould which will later be instrumental in the production of carbon-fibre aircraft wheel rims. Another application is diamond blades for cutting concrete on which the teeth have broken off. To weld on new teeth, extremely flat surfaces are required – a task executed to perfection by the new FA50-S. “We can see on a daily basis the new tasks that we can handle with the machine. Jobs that used to be performed on the milling machine are now executed better on the EDM,” says a delighted Kuhn. With this experience under his belt, the company can now itself offer jobshop services. What he has discovered is that, with its own machine on its premises, he now has a better feel for the machining steps. Kuhn is now amazed that he used to mill the workpieces three-dimensionally before sending them to the EDM jobshop. After machining the same workpiece on his own machine, it quickly became obvious that it makes more sense to first wire-cut the material flat and then to mill it. “When you’ve got your own machine, you’re more flexible. You can modify the machining ­procedure and develop many new ideas – and that’s the recipe for success for a small business,” says Kuhn in ­conclusion.

We can see on a daily basis the new tasks that we can handle with the machine. Jobs that used to be performed on the milling machine are now executed better on the EDM. 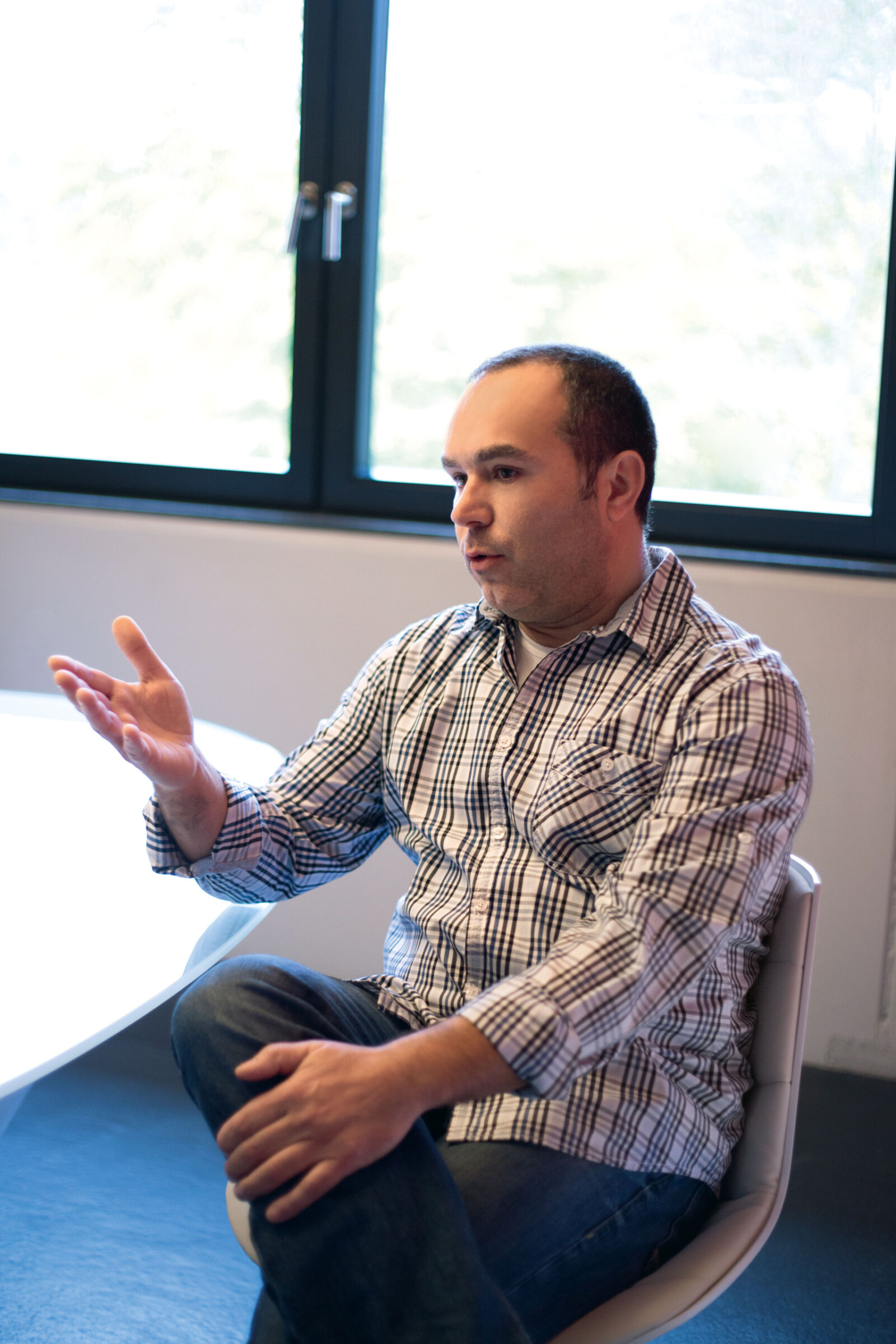 A source of superlative surface finish.

Core business:
Design and manufacture of a huge diversity of production tools and fixtures through to the production of prototypes and small and medium series using a variety of fabrication methods