No hurdle too high

No challenge is too big for Stefan Korbach. On the contrary: he enjoys developing complex injection moulds for technically sophisticated plastic parts. 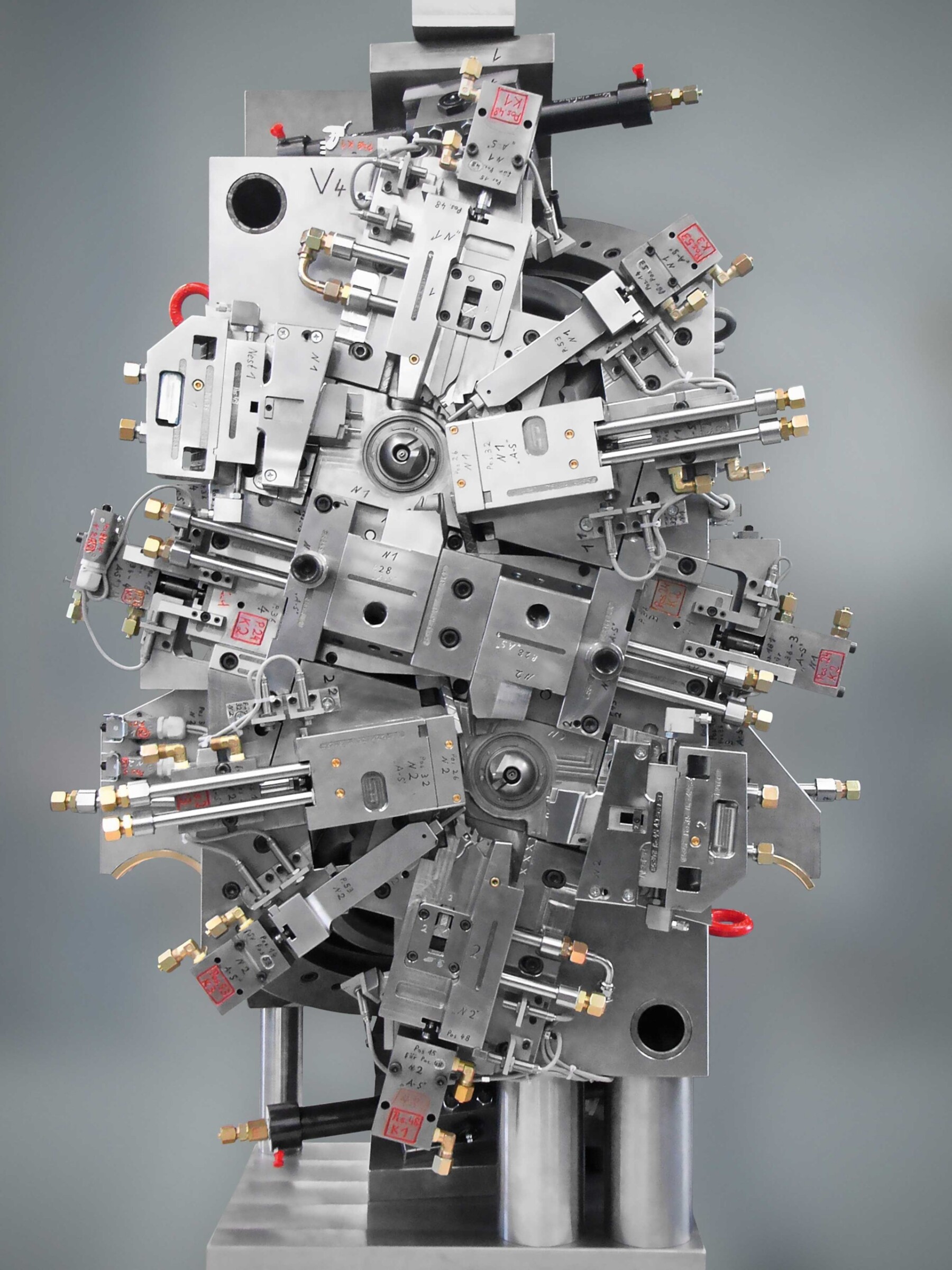 No hurdle too high

No challenge is too big for Stefan Korbach. On the contrary: he enjoys developing complex injection moulds for technically sophisticated plastic parts.

A man of principle: Stefan Korbach, Managing Partner of sk-werkzeugbau GmbH, Extertal, steps between the halves of an injection mould that comes up to his shoulders. “This complex mould for thermoplastics is a fine example of our company philosophy.” The injection moulds that the company produces also include high-temperature and multi-component moulds. These are joined by hybrid moulds into which other materials are inserted and in which separately introduced inlaid elements are integrally injection-moulded. Korbach: “We neither serve the market with simple components, nor are we willing to handle any job at any price or to compete with Far Eastern cut-price suppliers. Our customers appreciate our strategy and aspirations, technical support and high quality. And that’s why they recommend us to others.”

Committed to serving the customer

The approach of sk-werkzeugbau GmbH is also strongly marked by a com­mit­ment to serve the customer, now second nature to the entire team. “Our broad range of machines enables us to offer not only complex moulds, but also to provide services and fabricate one-off units.” Stefan Korbach stops in front of an injection mould in his produc­tion shop. “This mould is a good example of the modifications that customers sometimes want. This one was sent it to us by a customer so that we can adapt it to his modified end product. In such cases, it is also impor­tant to respond quickly. The same applies to repairs. Obviously the user wants to keep his downtime to a minimum.”

sk-werkzeugbau also gains the con­fidence of its customers with advice. “If it turns out that a plastic item can be produced more economically than with the originally envisage method, we point this out and suggest redesigning it if pos­sible,” Korbach stresses. He benefits here from his own expertise and that of his skilled staff who together contribute over 45 years’ experience of mouldmaking. 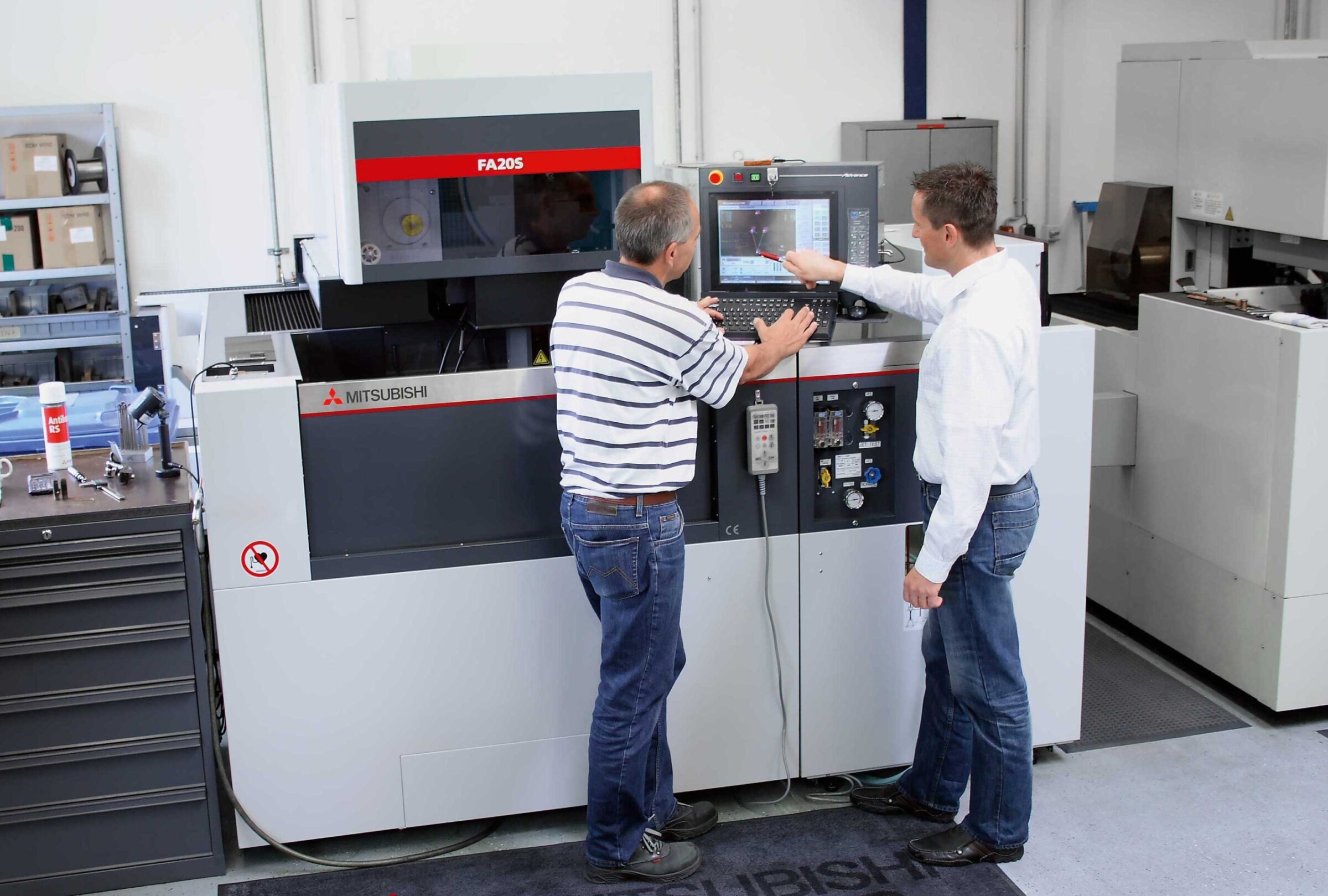 Stefan Korbach (right) and Mario Kramer, operator of the FA20-S Advance, discuss the next wire-cutting job.

On his laptop, Korbach opens up a time schedule. “We leave nothing to chance, keep track of the deadlines for each project and document progress. Every two weeks, we draw up a schedule and status report and send this automatically to the customer.” The company also produces measurement reports that it generates internally on a CNC machine. sk-werkzeugbau is also capa­ble of carrying out traceable flatness mea­s­urements and adjustments on plastic items and workpieces. These are important for the customer if, for instance, the products have to be ul­tra­sonically welded.

On our tour Stefan Korbach introduces us to his machine park. “To stay competitive we regularly invest in new plant. We want our customers to see our efforts to stay technically ahead, because the quality of our work depends essentially on this.” sk-werkzeugbau thus machines its injection moulds on hyper-modern CNC-controlled machines, one of these being the FA20-S Advance from Mitsubishi Electric.

The wire-threading system has satisfied our expectations in every respect.

The machine receives the production data for the component and the injec­tion moulding CAM data via an internal net­work. The components that sk-werk­zeugbau cuts on the FA20-S Advance with wire diameters of 0.1 to 0.3 millimetres are mainly made of heat-treated ESR steels that are less liable to crack than standard steels. To suit the appli­ca­tion, the surface treatments range from roughing to fine finishing. 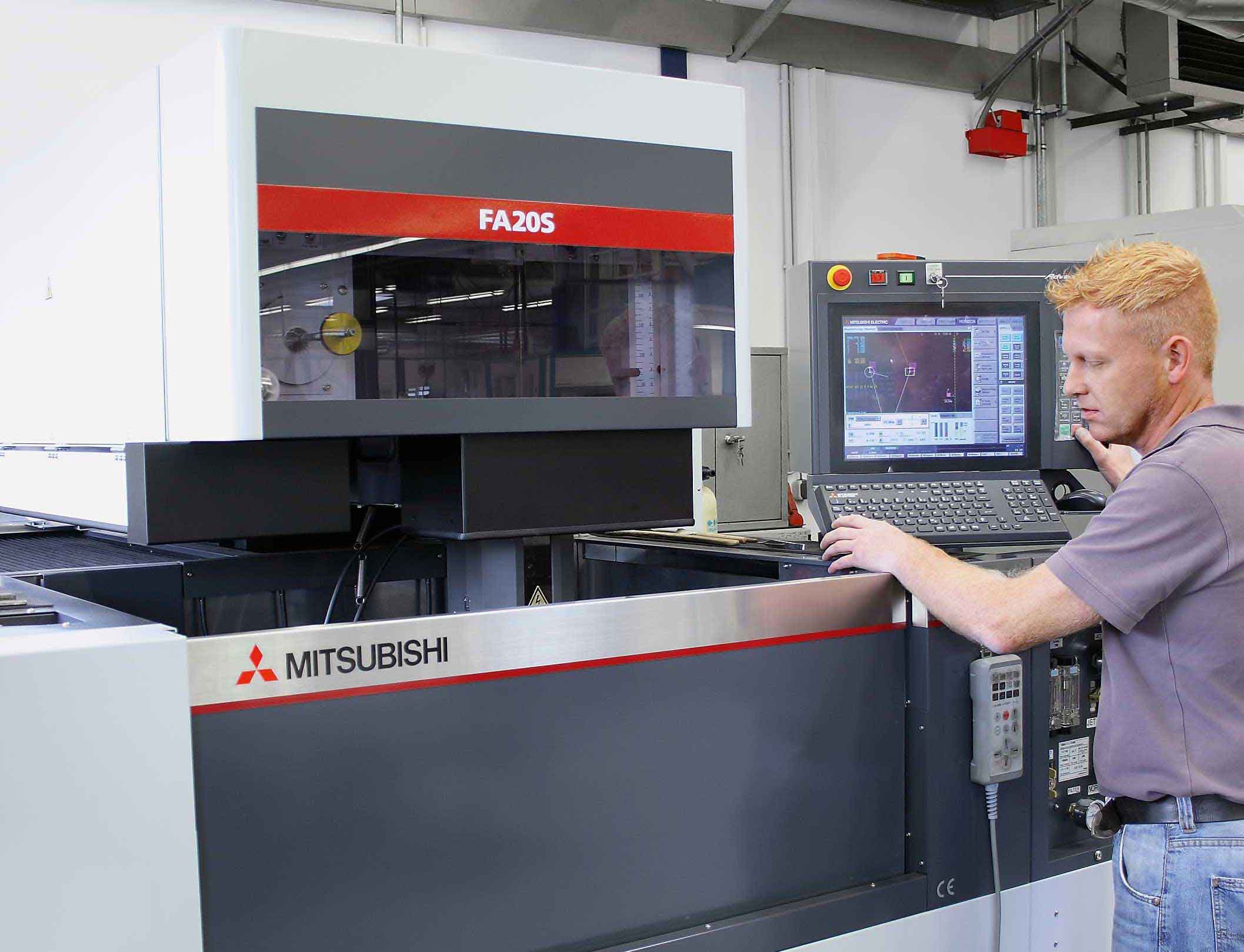 Jörg Micklitz is one of the highly skilled employees of sk-werkzeugbau who collectively contribute 45 years of experience to mouldmaking.

On the monitor of the Advance CNC control, which is equipped with the high-precision and dependable wire erosion system, Stefan Korbach calls up the CAD drawing of a mould component. The customer needs the unit for the production of brake boosters. “We mainly bought the machine because it can cut these safety-critical parts. As the ex­ample shows, we have to comply with extremely narrow tolerances and produce the components for a perfect fit.” Precision is also in demand for a plastic part for a light-actuated rain sensor project of the automotive industry for which sk-werkzeugbau has cut ejector holes in the required mould with a precision of five micrometres and without flashing.The machine’s user-friendly wire-thread-­ing system, which takes a mere ten seconds for threading, was another im­portant selection criterion. Korbach presents a workpiece with a start hole diameter of only 0.5 millimetres. “In a very challenging test, we asked Mitsubishi in Ratingen to check whether the wire could be threaded automatically into the given hole size of this com­ponent and, if so, how quickly and reliably it can do it. The results satisfied our expectations in every respect. We are therefore capable of running the machine unmanned even with tiny start holes – an advantage that we regularly exploit.” Despite auto­matic production, everything remains under control. And if a malfunction ever occurs, the machine’s intelligent Tele­contact function sends a message from the control via text message to a phone number specified by the user. 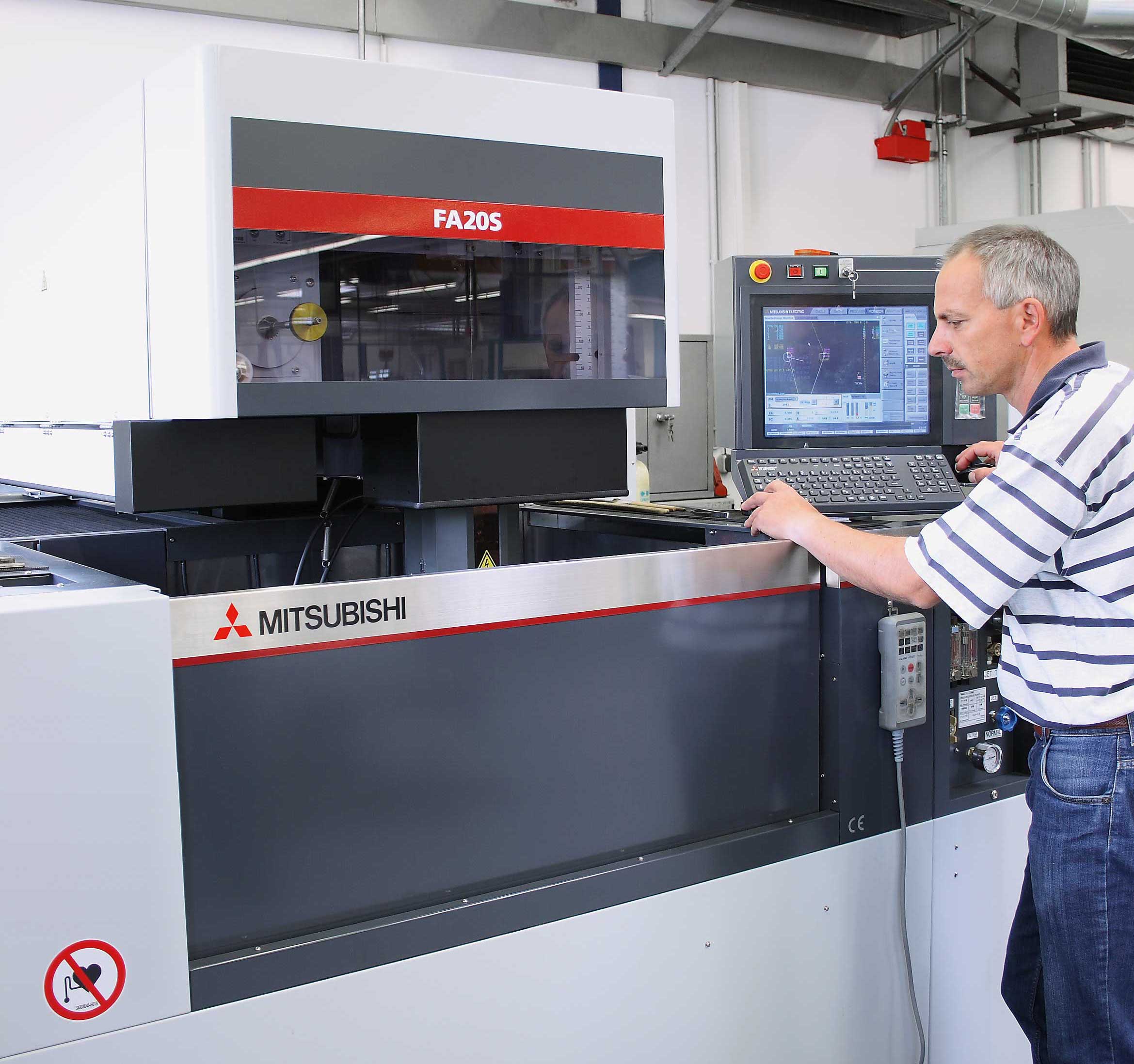 Mario Kramer monitors the user-friendly wire-threading system of the FA20-S Advance that takes a mere ten seconds for threading.

Another component that Stefan Korbach shows us is conical. “Above and beyond its high precision, the system must also be capable of cutting conical and other geometries. The equipment features that we consider absolutely essential include changing cutting heights and the possibility of smoothly interrupting cuts so that, for example, the cut can be executed through a bore.” The second Mitsubishi Electric wire-cutting machine used by sk-werk­zeugbau is an FX20-K Plus. The jobs it handles are much the same as those of the FA20-S Advance. It is only for very small start holes and large cutting heights that there is no alternative to the FA20-S Advance. The latter is also more reliable and more economic.

Stefan Korbach never rests. He con­stant­ly shuttles between his office and the production shop, immerses him­self in new jobs, makes phone calls or talks to his team. “We’re currently further developing mould components in cooperation with Bielefeld Techni­cal College. The goal of the project is to reduce the cycle time of injection moulding in order to make the production process more economic.” 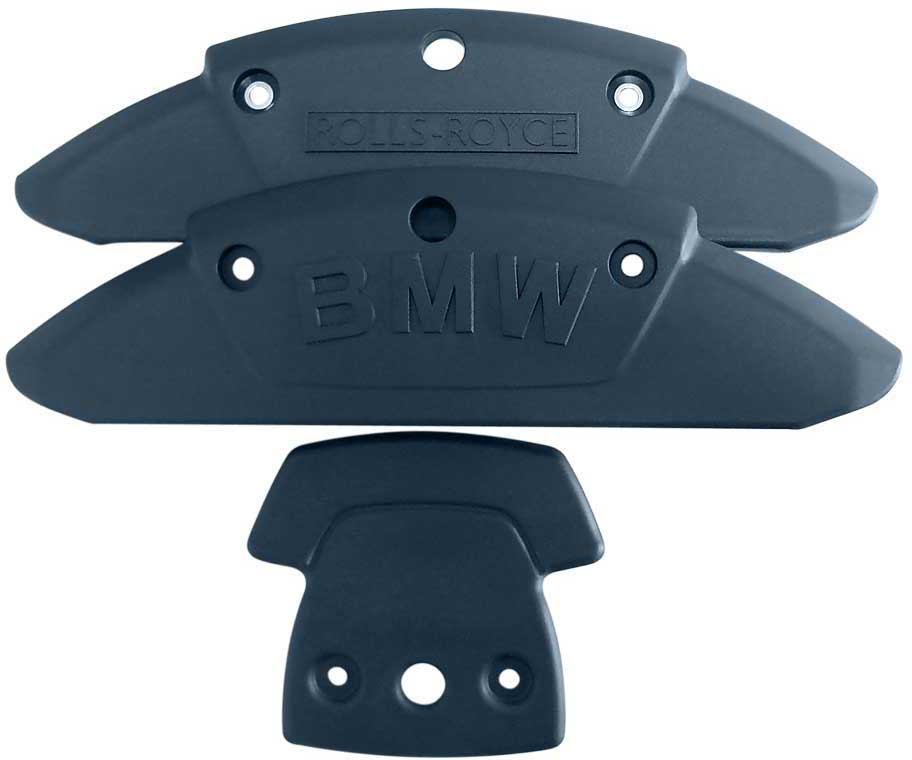 For the mass production of plastic parts, injection moulding machines that give the products the desired shape in the injection mould are used. The machine’s injection unit plasticises the feedstock, which usually takes the form of plastic granules. It then injects it into the closed mould. Usually of steel, it is made specifically for the product in question and forms the negative shape of the plastic part with the aid of a cavity and a mould core. The mould opens after each cycle, and the product is demoulded. A mould equipped with several cavities and mould cores is capable of producing the equivalent number of parts in a single cycle. If a user wishes to produce mouldings made of different plastics, e.g. rigid and flexible, a multi-component mould has to be used. 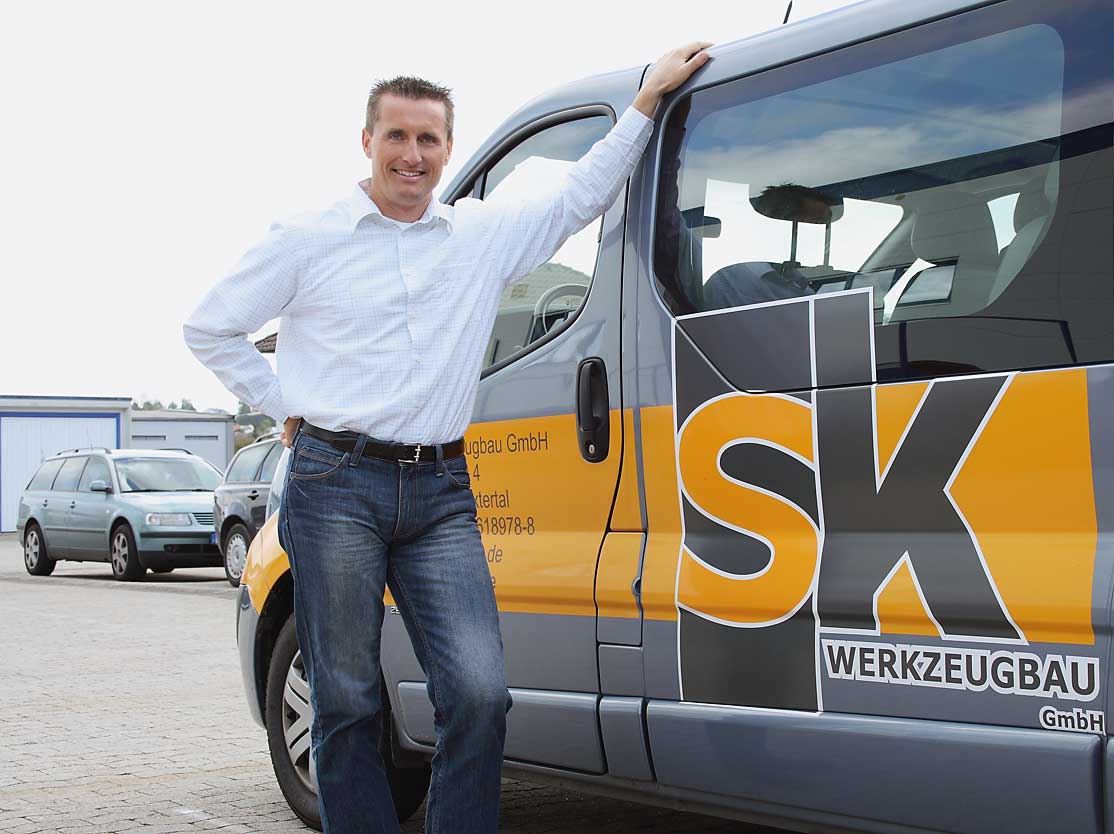 Having run the mouldmaking ac­tivities of Friedrichs & Rath GmbH, a manufacturer of high-grade plastic parts, for many years, Stefan Korbach took over the department and started his own business in 2008. Building on his expertise acquired there, he and his 30 employees now produce high-quality injec­tion moulds that achieve long service lives. This has impressed
his customers, who can be found mainly in the automotive industry, but also in medical technology and the furniture industry. 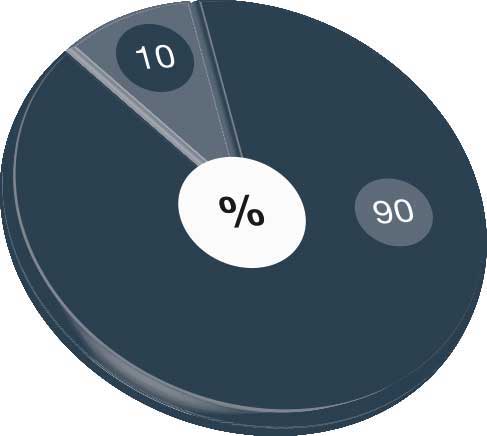 Please describe in a sentence what sk-werkzeugbau GmbH does!
We make steel moulds (injection moulds) with which our customers produce plastic articles.
How did you earn your first money?
Making injection moulds and repairing and modifying them.
What motivates you?
My goal of positioning a well-known and successful mouldmaking oper­ation on the market as well as communicating with interesting people every day and learning from them.
What’s different about how you do things now, compared to five years ago?
Today I work “in order to win” and not “in order not to lose”.
Where do you see your company in five years?
The company will be at least as big as it is now and we shall continue to specialise in certain product categories and position ourselves accordingly.
What was your biggest business success?
Piloting sk-werkzeugbau together with my staff through the global financial crisis.
What’s your favourite way to relax?
At home with my family and with friends and practising sport and my hobbies. 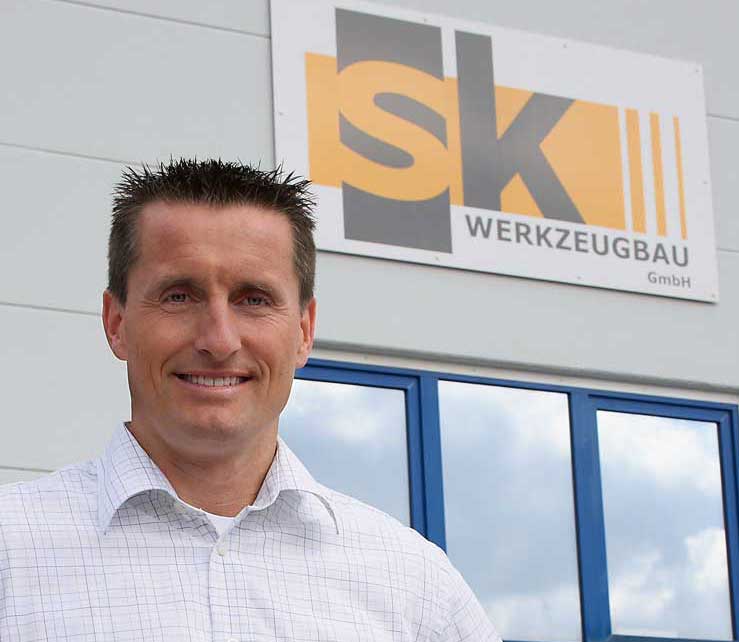