One robot for four

Characteristic of GEWO Feinmechanik GmbH is its zest for innovation. With the idea of an EDM island, on which one robot serves four wire EDM machines, the medium-sized company has broken new ground in the automation of electrical discharge machining. 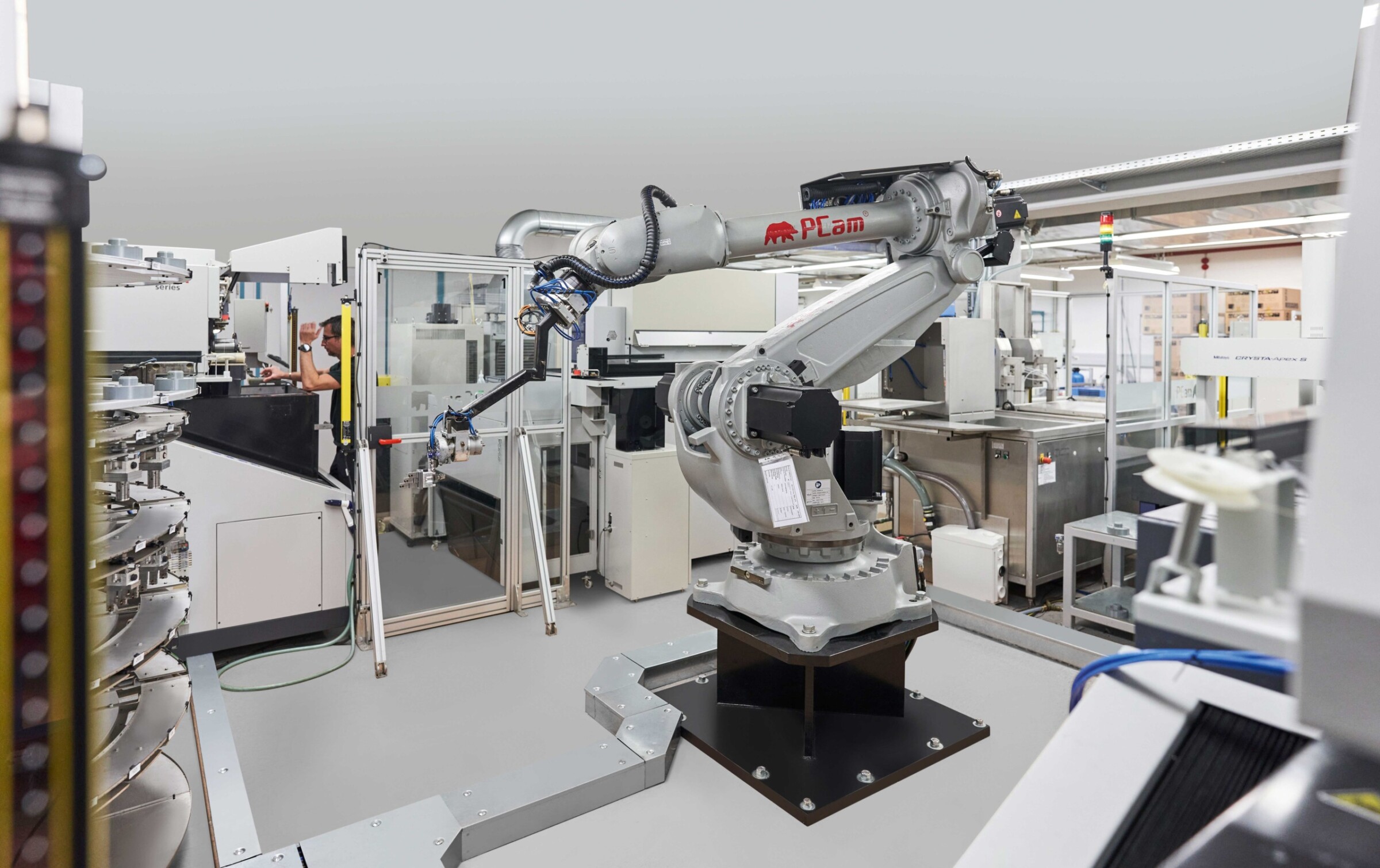 Characteristic of GEWO Feinmechanik GmbH is its zest for innovation. With the idea of an EDM island, on which one robot serves four wire EDM machines, the medium-sized company has broken new ground in the automation of electrical discharge machining.

One robot for four. Full automation in electrical discharge machining.

GEWO Feinmechanik GmbH is a company that impressed us with its innovative spirit and drive during Profile’s first visit in 2019. The finest example of this is its “EDM island” – a fully automated production cell for electrical discharge machining that was set up in 2016. It is also the reason for our second visit to the specialist in precision engineering – because it illustrates why GEWO belongs to the top league in the industry. 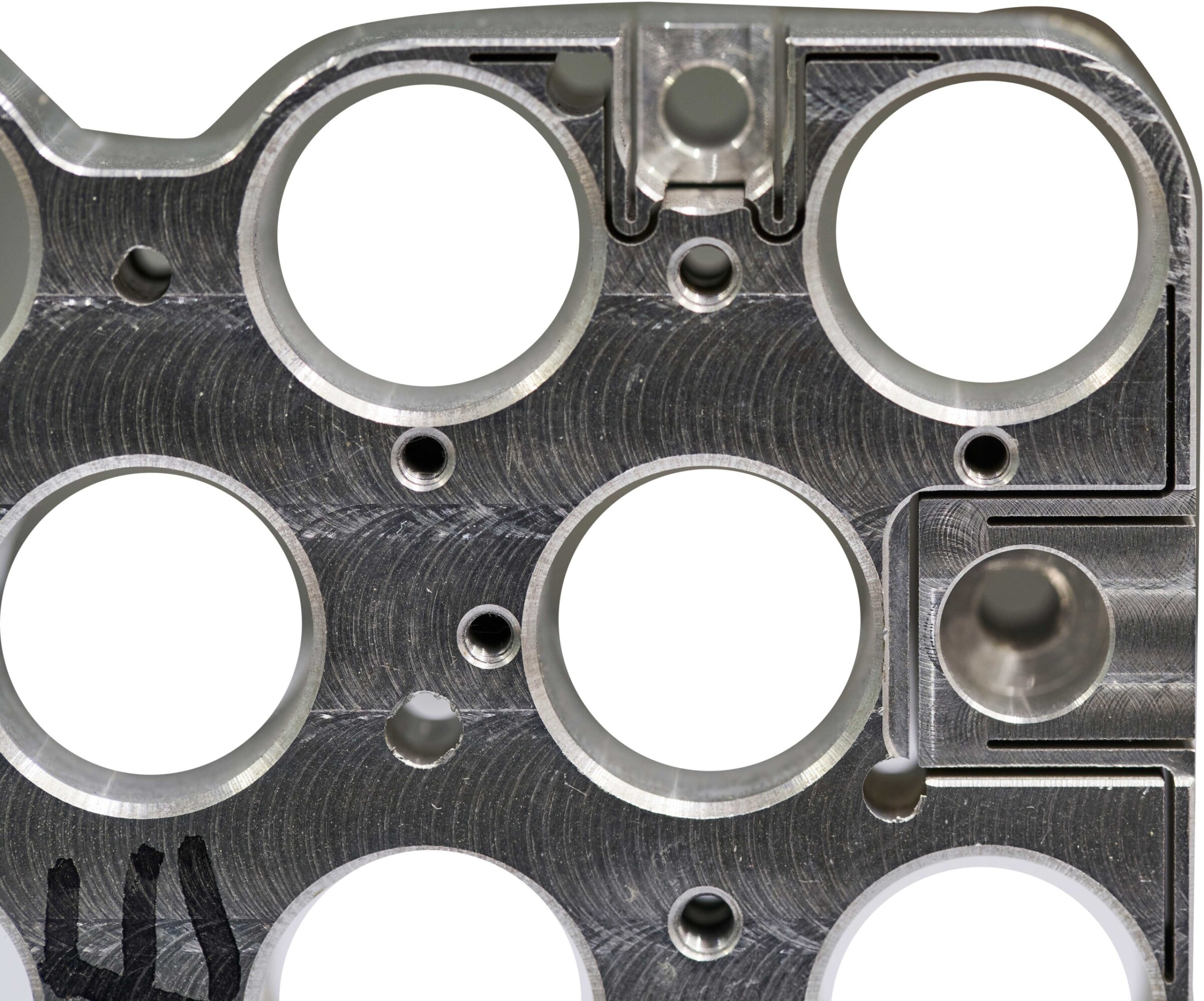 Erosion contour for the flexible alignment of the plate plane

Stefan Woitzik, who manages GEWO together with his brother Andreas, explains that the EDM production cell was the first such automation project at the company. “At the time, we consciously decided to implement automation in the EDM sector first – because machining on Mitsubishi Electric systems had proven particularly reliable. This meant we could concentrate on the peripheral equipment.” With their high dependability and ease of maintenance, Mitsubishi Electric wire EDM systems are able to run for long periods without manual intervention – an essential prerequisite for process automation. A key element here is automatic wire threading, as there is no time-consuming return to the starting position on these machines. Thanks to thermal wire preparation, the process resumes without delay. The reliable wire threading also ensures a stable process and high availability around the clock. 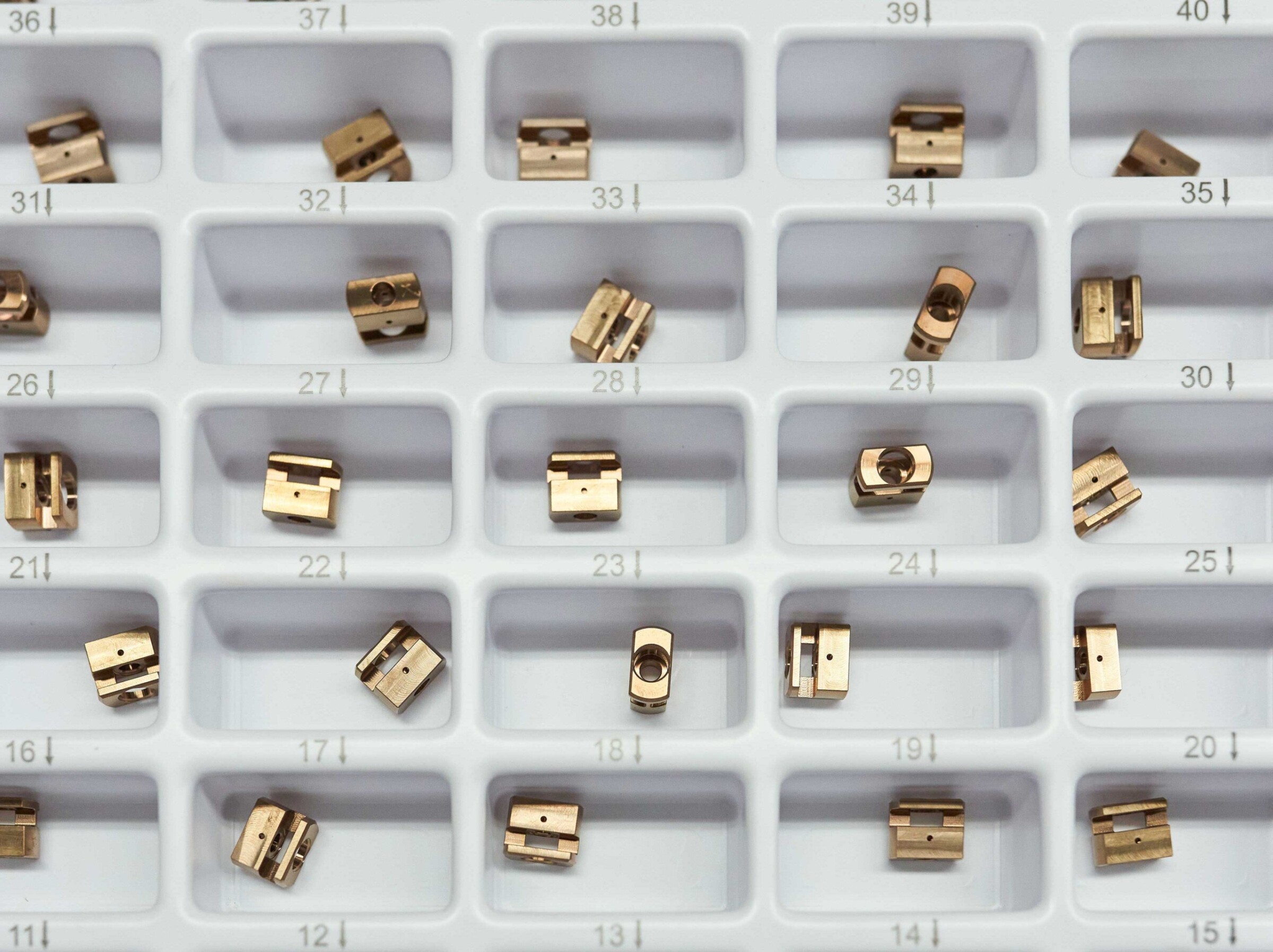 Blanks with labelled packaging for the assignment of serial numbers

In this automation project, GEWO once again demonstrated its eagerness to explore innovative avenues. “Although there were solutions that load an EDM system with robotic assistance,” Woitzik explains, “the robot would have spent too much time waiting, as the EDM process is relatively slow. We wanted to put the robot to more efficient use.” It was therefore decided that the robot should serve four EDM systems as well as a measuring station and a cleaning station. 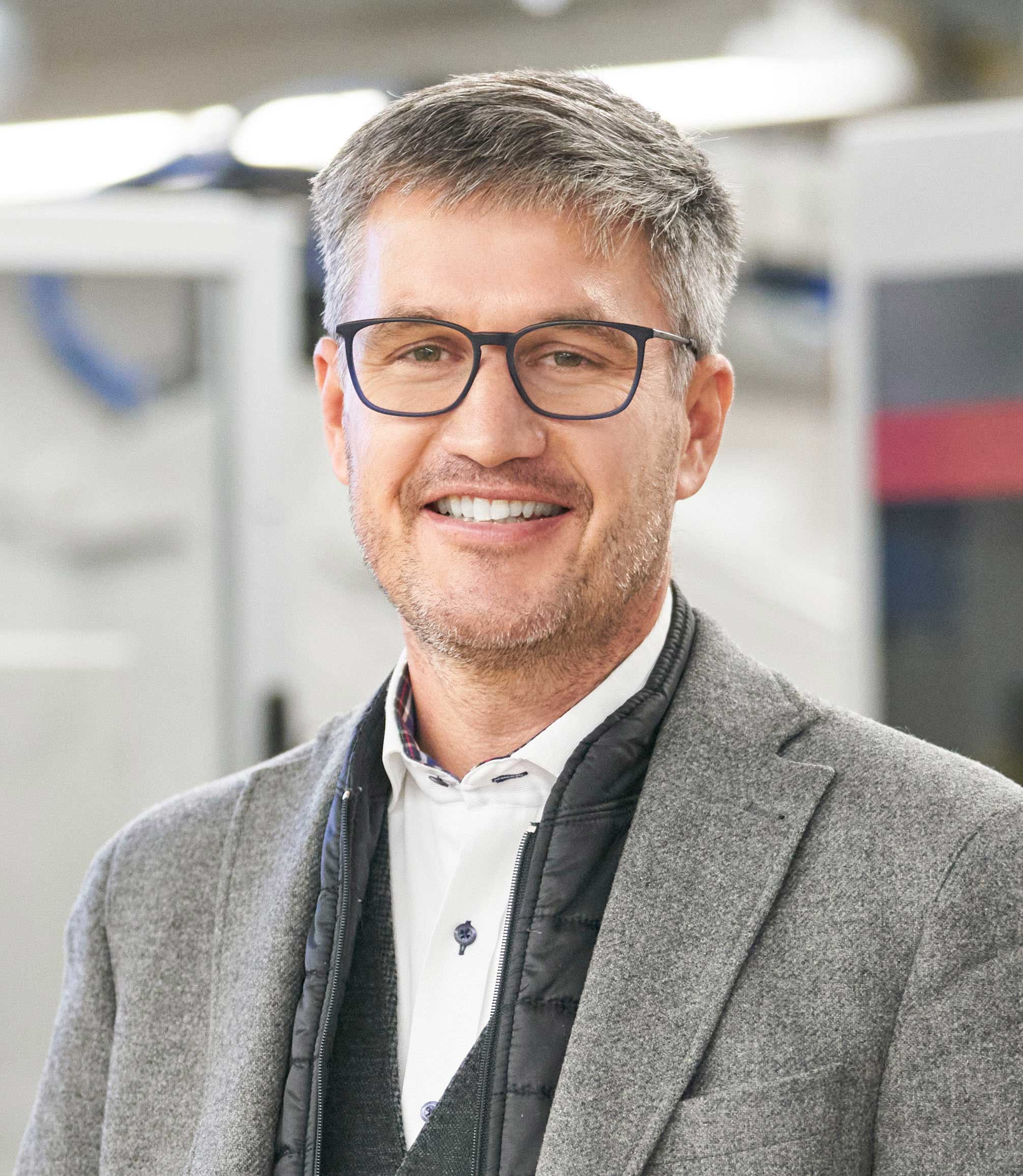 Today we can run four EDM machines around the clock with a total of only three employees.

GEWO with its Mitsubishi Electric EDM machines was already well prepared for full automation – the EDM cell was to comprise three MV1200Rs and one FA20S Advance. The machines are “automation-ready”, with a DNC interface for external control as standard. Not only is it possible to issue such remote control commands such as “Start”, “Stop” and “Reset”, but all the relevant data – from individual variables and technology data to entire NC programs – can also be supplied via this interface. This means that the wire EDMs are extremely easy to control via text commands, making them independent of special software systems or the philosophy of the automation company. What’s more, the wire EDM systems from Mitsubishi Electric offer – depending on the model – an optional interface to MTConnect. Along with OPC-UA and Edgecross, this is one of the most important standards for integration into Industry 4.0. It is used primarily for gathering operating data for an assessment of a machine’s rate of utilisation or profitability. 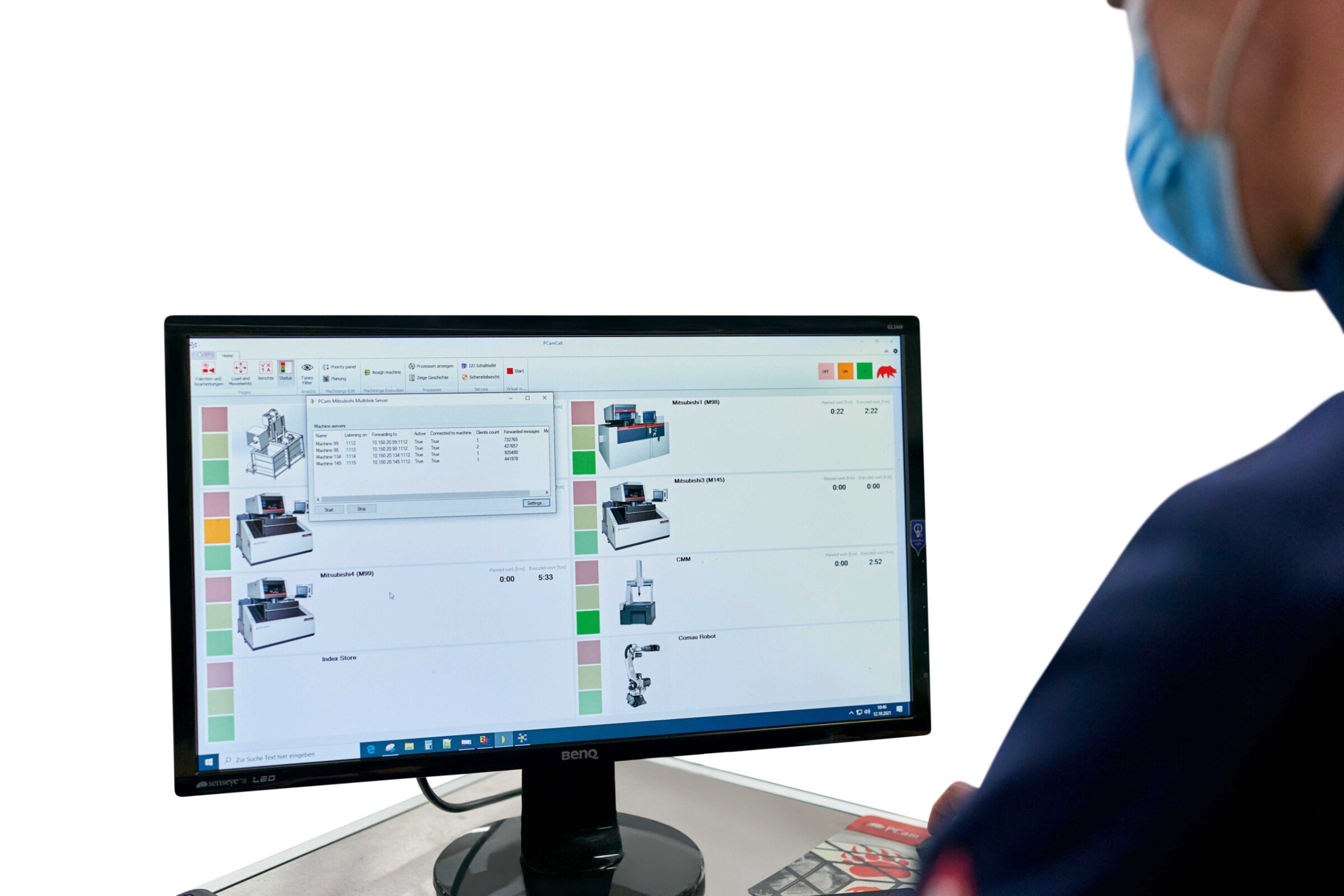 Status display of the various stations in the automation cell

Automation system from a single source

Woitzik and his team opted for a solution from PCam as the connecting system for cell automation. The Swiss company provides a one-stop solution that includes a robot with six degrees of freedom as well as the associated software systems. PCamCell manages the various machine tools and workstations within the cell, while the PCamWire CAD/CAM system permits programming of the wire EDM machines. “Creating an overall system from the various elements was totally uncharted territory for us – this is where we had to rely on outside specialists,” Woitzik admits. But it has paid off – today GEWO benefits enormously from what the automated EDM island’s capabilities. 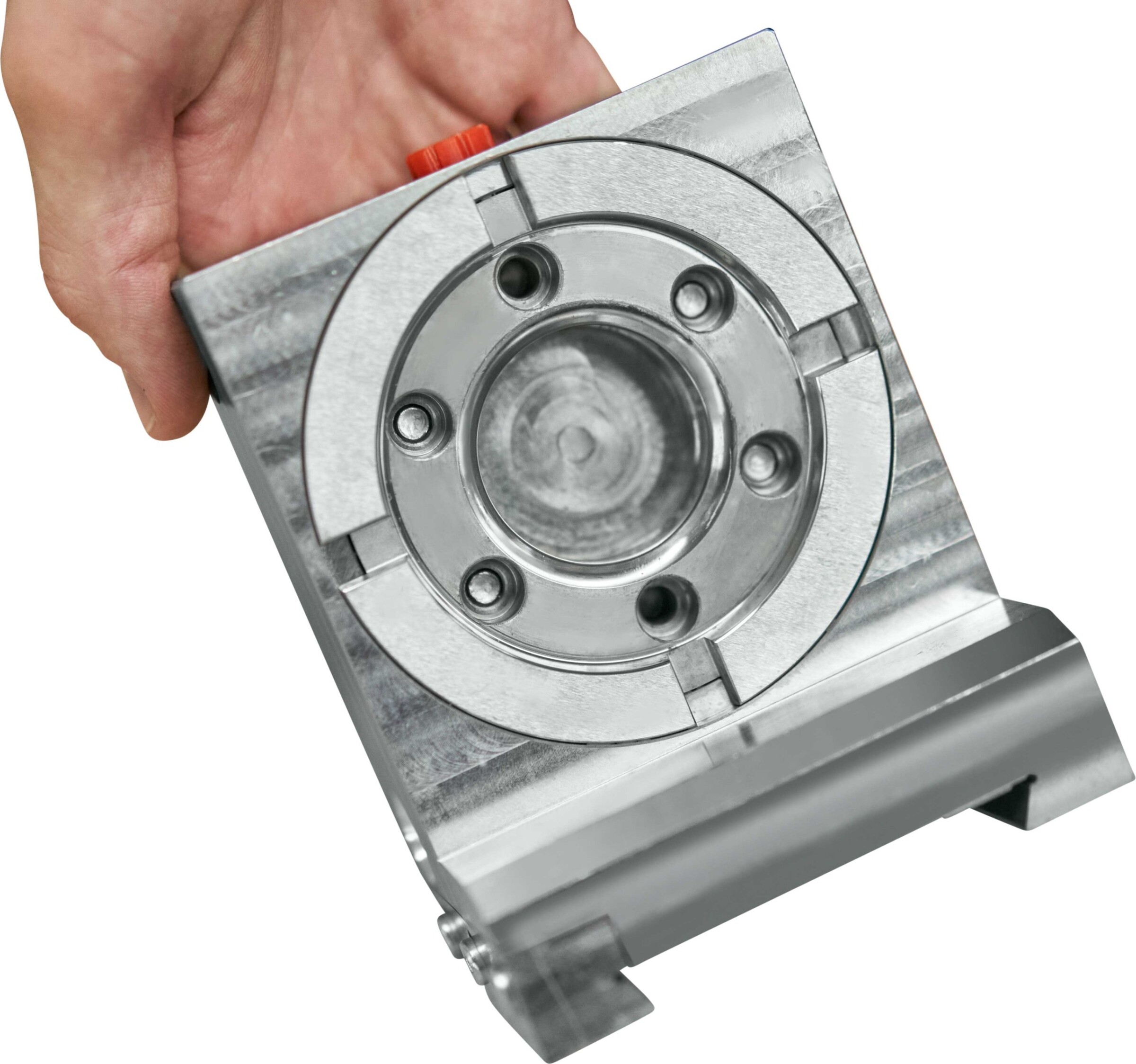 Chuck that holds the fixtures for robot assembly 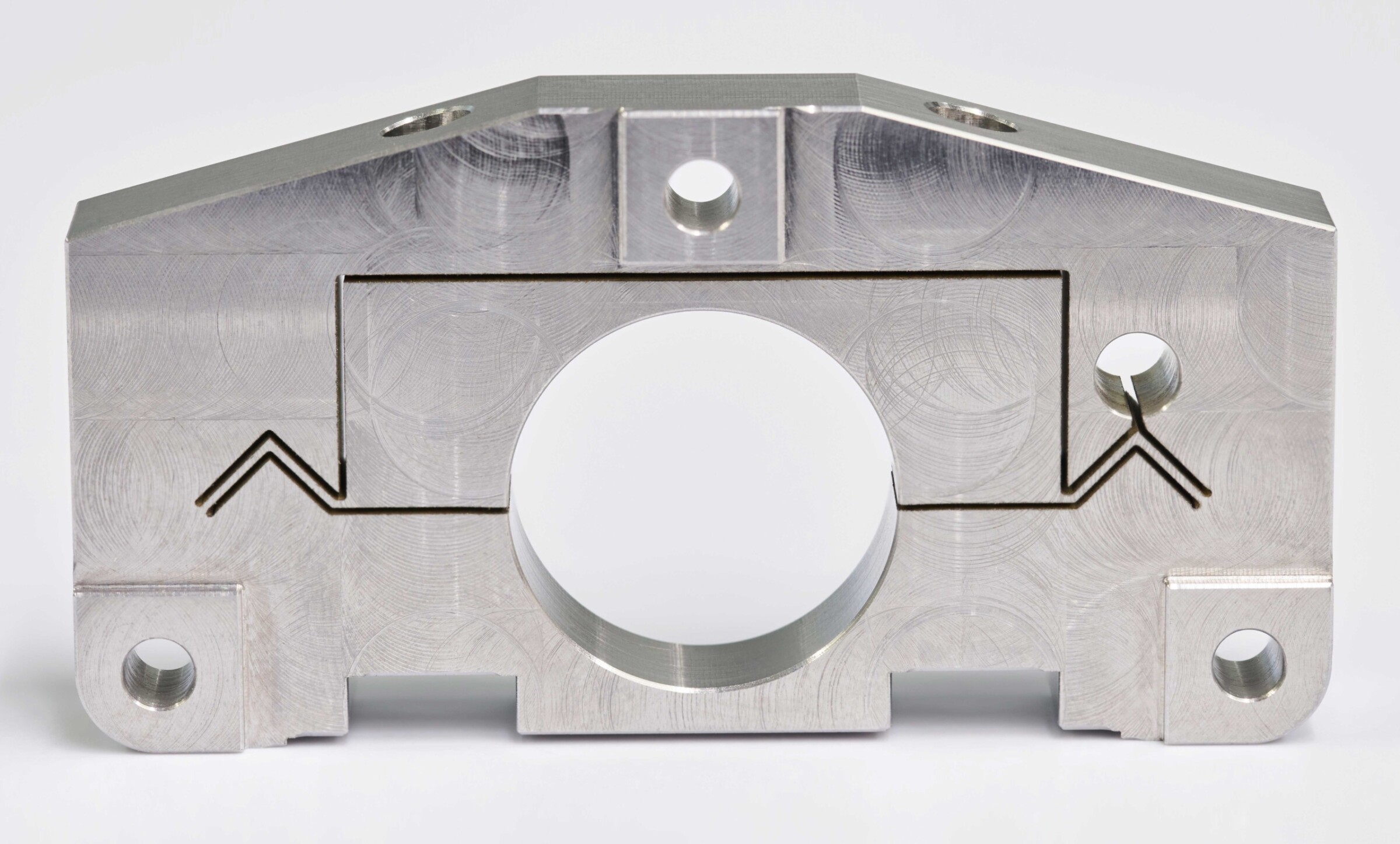 Component with a wire-cut contour for clamping a shaft

For this purpose, GEWO has integrated a coordinate measuring machine as the cell’s first workstation. The robot takes the parts already manually clamped and deposited in the carousel magazine and places them in the measuring station. Here the zero point is determined and the clamping checked. The robot then transfers the clamping device with the component to one of the four wire-cut EDMs. PCamCell also communicates the zero point to the machine control and uploads the programs created in PCamWire and required in each case. 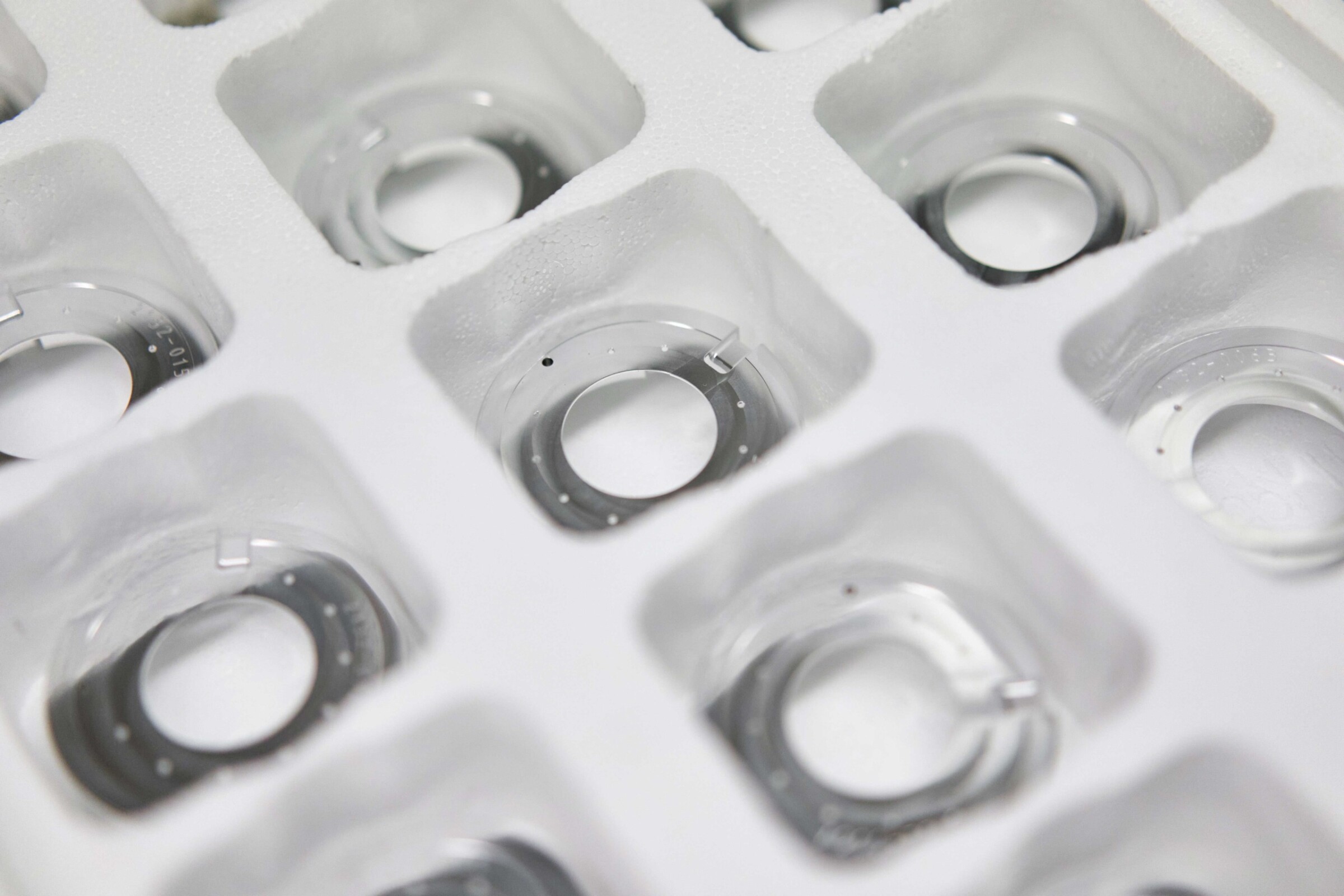 A milestone in automation.

After machining – roughing and finishing, in zero-degree or 90-degree clamping – the robot conveys the parts straight to the fully automatic cleaning system. Woitzik: “Thanks to cleaning immediately after machining, the erosion sludge doesn’t even have time to harden. In addition, we have 100 per cent verification that every part has been cleaned.” This is important, for example, for listing as a Trusted Supplier in the highly discerning semiconductor industry. 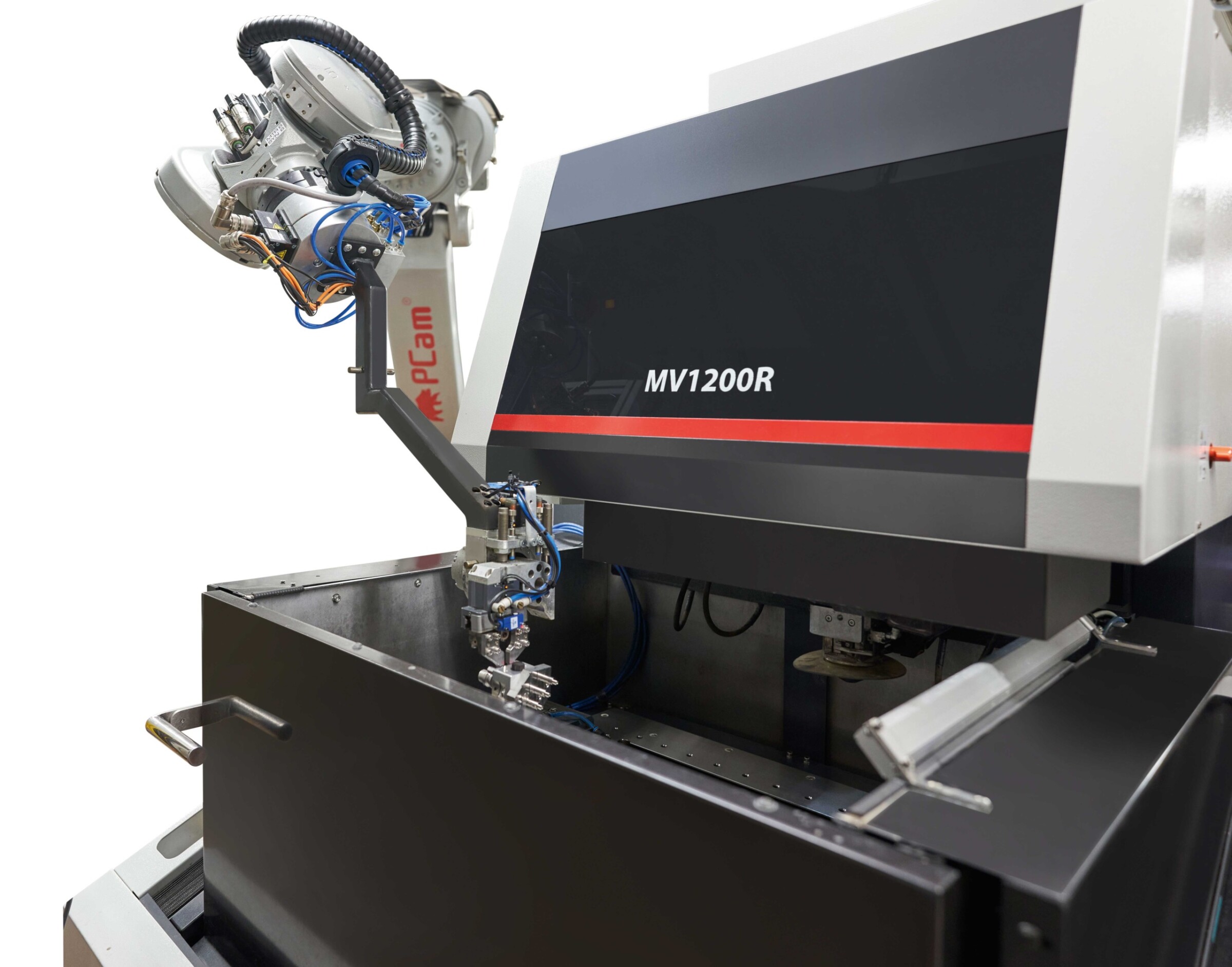 The final step is another control measurement of the finished component: “We carry out the 100 per cent measurement often requested by our customers more or less simultaneously. All the data are saved in the CAQ system and also fed back to PCamCell,” Woitzik explains. “If a measurement isn’t right, direct feedback is given so that the sequence program can be immediate corrected.” The measured data are also used directly for process optimisation. If the measurements are not in the middle of the tolerance range, PCamCell receives information to this effect directly and corrects the process in the EDM system fully automatically, Woitzik reports. “This means that the next part to come out of the machine is even better. This has allowed us to make a huge step forward in quality.” A self-optimising production process – Industry 4.0 at its best. 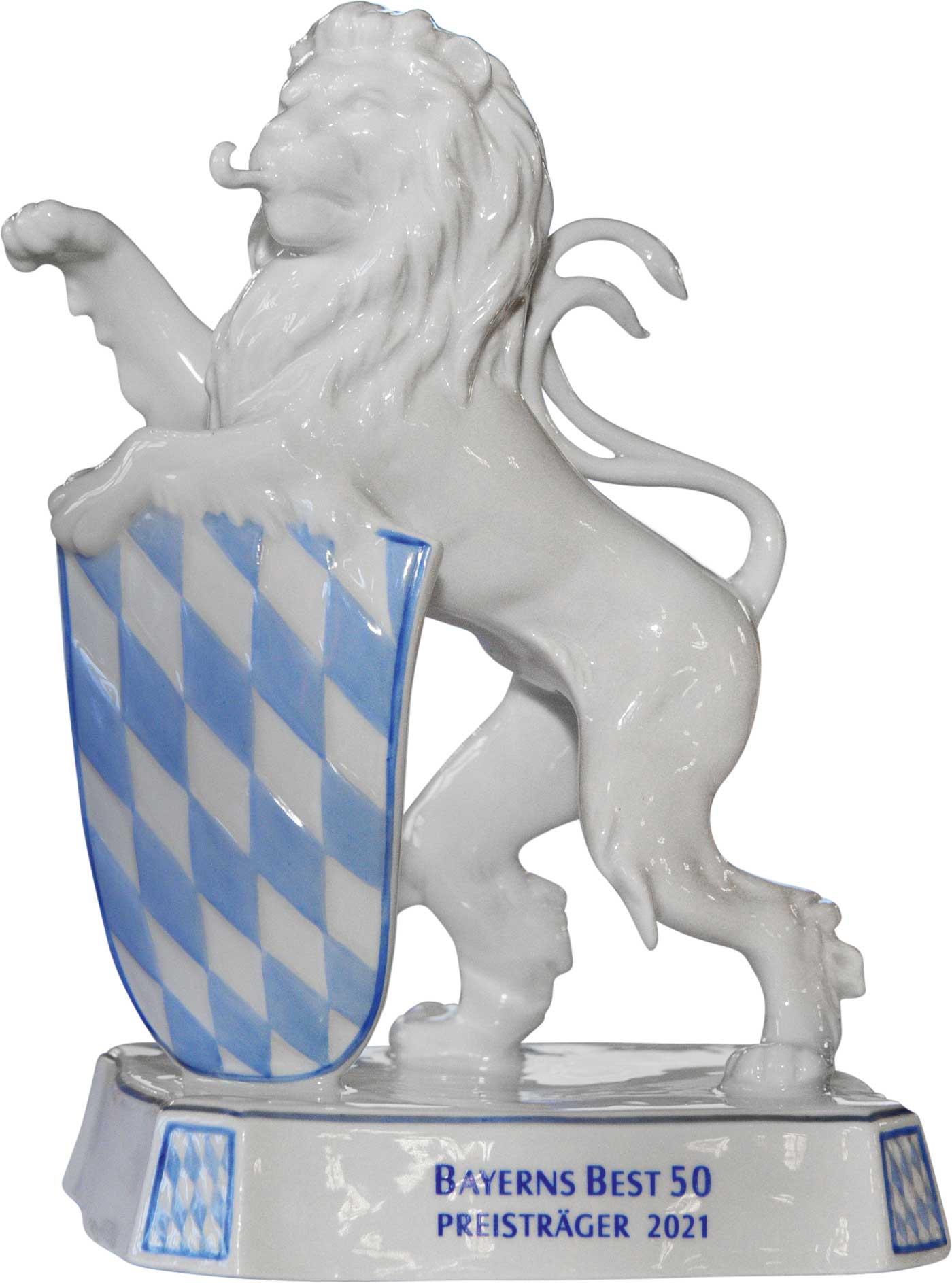 Production time cut by half

Today, Woitzik cannot imagine doing without the EDM island: “It has taken us a big step forward. Today we can run four EDM machines around the clock with a total of only three employees. Without this investment, we would have needed more skilled manpower – and this is in short supply in Bavaria.” Furthermore, the development of the EDM cell also prompted GEWO to re-evaluate all processes and optimise them, Zimmer adds. “We’ve optimised the clamping devices, for example, and can now clamp several parts one on top of the other. 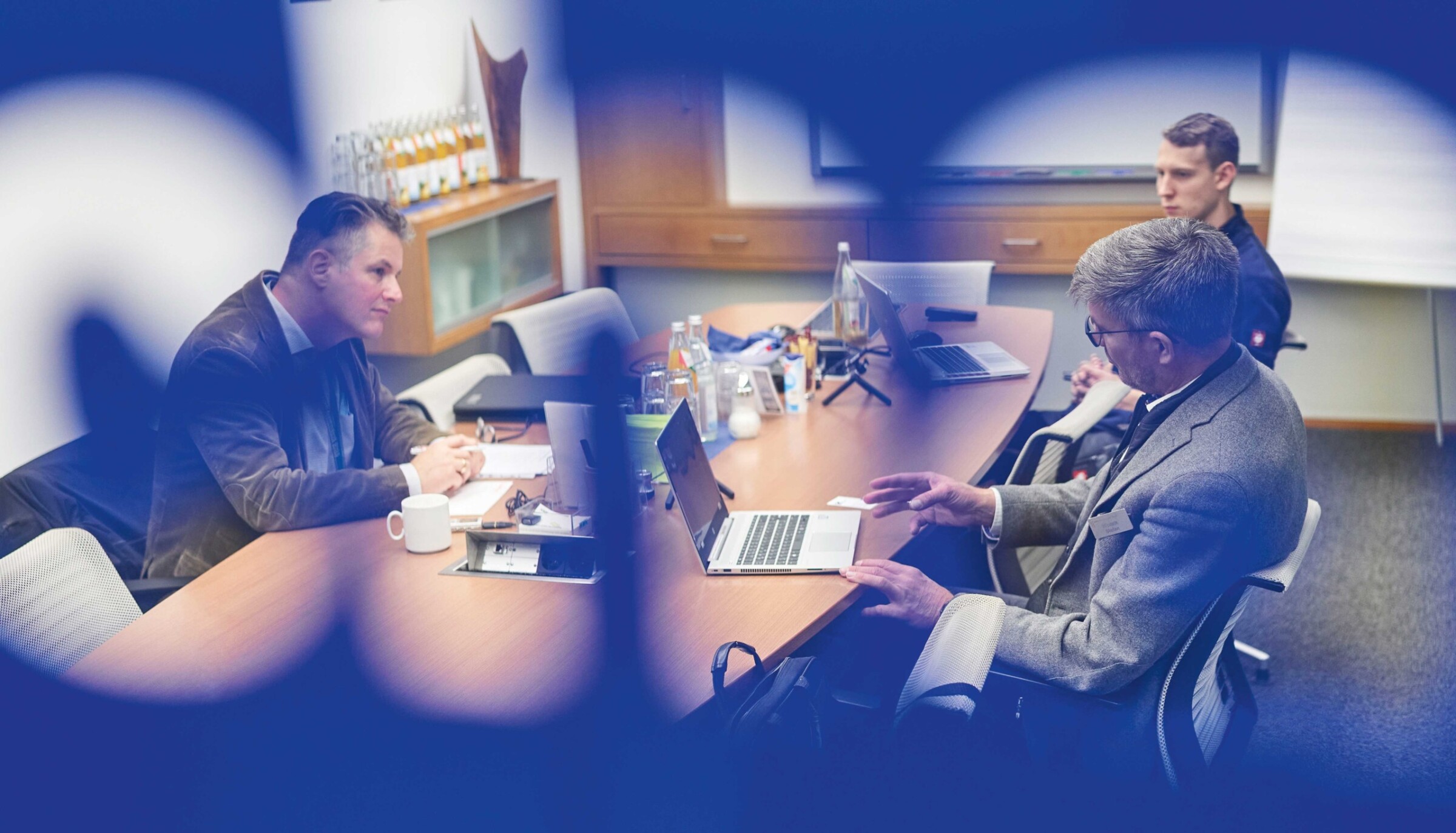 Parts production at twice the speed.

This cuts running time – today we machine parts up to twice as fast as before.” So it’s a good thing the EDM island is geared for expansion. It can simply be mirrored, with the second island then using the existing measuring and cleaning station. There are no definite plans for the expansion yet – but if GEWO continues to grow as rapidly as it has done so far, that may well change soon.

One of Bavaria’s best

GEWO Feinmechanik GmbH was awarded the Bavaria’s Best 50 Award in 2021. This award commends the 50 best-performing owner-run medium-sized companies in Bavaria that have grown faster than average in terms of sales and workforce. While GEWO employed just over 400 people in 2019 – the first time Profile visited the company – in 2021 it now has 530 employees, including 93 trainees. The prize winners were identified by an auditing company as an independent juror on the base of objective criteria on behalf of the Bavarian Ministry of Economic Affairs. GEWO has now received the award for the third time.