“When a Swiss toolmaker says ’precision’, he’s talking about micrometres,” Thomas Rüegg tells us. Maximum precision for him is more than a slogan, for it is the key to success for the innovative company from Rüti in Switzerland...

“When a Swiss toolmaker says ’precision’, he’s talking about micrometres,” Thomas Rüegg tells us. Maximum precision for him is more than a slogan, for it is the key to success for the innovative company from Rüti in Switzerland. For years, the production of precision tools was the main activity of the company founded in 1963. Today, PWR sees itself more of a maker of precision parts in small and medium series. Its customers come from many sectors. Top of the list is motor racing with the Sauber Formula One team, which, together with customers from the automotive industry, aerospace and medical technology, keeps the production shop ticking over. Classical mould- and toolmaking for machine manufacturers, the plastics sector and packaging industry is no longer as important at PWR as it used to be.

When the Formula One race cars vie for points and victories in the 2014/15 series, precision parts from PWR in Rüti are always out on the circuit. Some years ago, when Sauber teamed up with BMW in Formula One, the Swiss company specialised in engine and transmission components such as differentials, shift drums and shift forks. Now, since the reorganisation of the Sauber race team, it is mainly high-precision components for chassis adjustment that leave the company. For Rüegg, Managing Director of the company with its 30-strong workforce, it is not so important whether he produces a one-off or a part in a small series, for it is the quality that is always important. To meet the demanded high standards, PWR exclusively employs skilled mechanics who undergo regular further training and are therefore always right up to date.

It’s the climate that counts

Precision is always closely associated with constant temperatures. To be able to deliver this standard of quality to its customers, PWR’s production facilities are fully temperature-controlled. To make do with just an air-conditioned measuring room, like many competitors, is not an option. Of course, this has its price. Some areas like the milling department therefore have to be cooled all-year-round, even in the icy Swiss winter. In areas devoted to EDM and grinding, the cost of constant temperature control is not quite as high.

Not everyone in the industry appreciates that precision requires a defined temperature. Even experts in large companies are sometimes unaware of this. “Some time ago,” Rüegg tells us, “we produced a tool and had it sent by a forwarder to the customer in the evening. This was in the winter, and the tool was stored overnight in an unheated vehicle shed and delivered the next morning. On arrival, the customer put the tool straight onto the measuring machine – without time for acclimatisation – and complained of dimensional inaccuracy. About 24 hours later and at a temperature of 21 degrees Celsius – surprise, surprise! – all the dimensions were spot-on with micrometre precision.”

Shift drum of a Formula One vehicle. Gears are shifted at each cam. 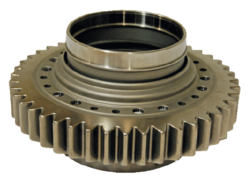 The more accurately the gearwheels in the gearbox are tuned, the lower the power loss. 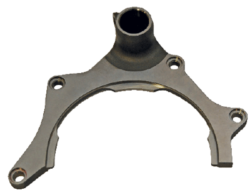 So that the drivers in Formula One can bring the engine’s full power to the road, the shift forks are precision wire-cut to within a few micrometres.

If you want to stay in the running in Formula One, you’ve got to be quick, and not only on the track. From its component suppliers, the industry expects not only maximum precision, but also a good deal of flexibility. If a part is damaged during training, a replacement has to be supplied virtually on the spot. The whole company is then under pressure and has to work into the evening and night and at weekends. “The customer justifiably expects a replacement part that is fabricated speedily but also with absolute precision,” says Rüegg.

To carry out such work to perfection, a company needs not only advanced and adaptable equipment, but also skilled and committed employees who identify with what they do. Rüegg relies on highly skilled mechanics for whom regular further training is a matter of course, as PWR depends for its existence on its high standards of workmanship. “Our goal,” says Rüegg, “is always to be a nose ahead of the competition, and that’s why we invest regularly in new technology.”

The production department is thus dominated by high-tech machines, starting with up to five-axis milling machines through to advanced CNC-controlled turning and grinding centres for coordinate, cylindrical and eccentric grinding, lapping and polishing. Wire cutting, die sinking and start-hole drilling machines are also included in the battery of high-grade machinery. And, finally, there is a 3D measuring machine, which is absolutely essential in a company whose ethos of professionalism entails measuring and recording.

PWR’s most recent acquisition is the Mitsubishi Electric EA12V Advance. The all-round machine installed at the end of 2013 is technically highly advanced. “We’ve again turned to Mitsubishi Electric,” Rüegg explains, “because our experience over many years with the company and its EDM machines has been nothing but excellent. Our confidence in Mitsubishi Electric technology has therefore grown.”

“Before we invested in our first Mitsubishi Electric wire cutting machine, our customer Sauber gave us a nudge in the right direction,” Rüegg continues. “The employees at Sauber were enthusiastic about the machines and certainly influenced our decision.” Without the Formula One connection, PWR may not have looked as closely at the Mitsubishi Electric machines, as its experience with wire cutting machines from other manufacturers was also encouraging.

A reference visit to Sauber during which PWR was able to try out an FA-20S Advance itself and produce a number of sample parts soon swayed Rüegg senior. “The quality was right, the working speed was impressive and the people at Sauber were full of praise for Mitsubishi Electric,” Josef Rüegg enthuses. “And we were so happy with the first FA-20S that we ordered a second, identical machine within a year.” For the most recent investment decision, those responsible at PWR again chose a Mitsubishi Electric wire cutting machine, this time an EA12V Advance with 3R Workpartner Automation. They wanted a high-performance, high-tech machine that suits their product portfolio. It was soon clear that they wanted to build on their promising experience with Mitsubishi Electric. Since the EA12V Advance has only been in operation for a few weeks, PWR does not yet have much practical experience with the machine. But the findings so far have been encouraging.

Programming and execution from a single source

“Specialists not only achieve the exceptional, but they also need responsible tasks,” says Rüegg. “Although we have a central job scheduling department, we don’t have our own programmer.” At PWR, each machine operator programs his own job himself. And each employee has his own way of going about this. “We set the goal,” says the boss, “and the mechanics themselves decide how to get there.” The employee programs his parts himself and gets down to work at the machine as soon as he’s ready. This way, the jobs are not only more interesting, but the employee bears full responsibility for the programming. “PWR has had nothing but positive experience with this exacting way of doing things. It’s also one of the cornerstones of our quality and precision,” says Rüegg summing up.

“The employees at Sauber were enthusiastic about the machines and certainly influenced our decision.”

Win-win situation thanks to clear identification

PWR aspires to be technologically ahead of the competition. For Thomas Rüegg, this is made possible not only by high-tech production, but also by quality control and logistics. “In the European Union, every cow has its own unique ID clipped onto its ears so that its path from its birth to the abattoir can be traced,” Rüegg explains. “In toolmaking, the tool is usually accompanied by the measurement record and data. However, unique identification on the tool itself is the exception.”

This quality shortcoming was the reason for the company to invest in a laser printer some time back. Since then, each workpiece gets its own fabrication number and is thus unmistakably and permanently marked. “The consistent application of this technology benefits both sides, us and the customer,” Rüegg explains. “The customer can clearly identify each part even after several years and we can quickly fish the complete production data out of the archive and produce an identical replacement part if needs be.” 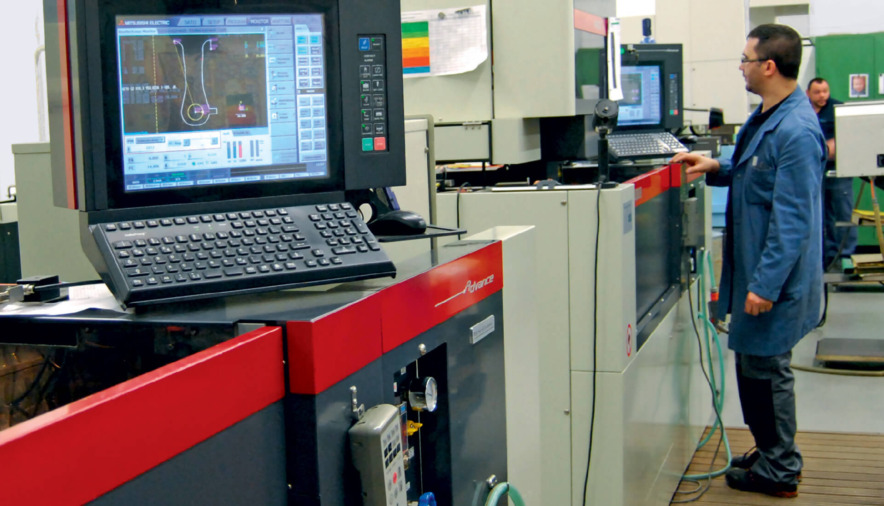 In the last few years, PWR has developed into a maker of precision parts and of small and medium series.

How would you describe in a sentence what your company does?
We make highly complex components.
How did you earn your first money?
Cleaning windows as a schoolboy.
What is your source of motivation?
My family and the pleasure of my work.
What’s different about how you do things now, compared to five years ago?
It takes me longer to lose my cool.
Where do you see your company in five years’ time?
We shall automate our processes and produce more high-end parts.
What was your biggest business success?
The integration of ADAXYS Solutions AG in our company at the turn of the year 2011/12.
What’s your favourite way to relax?
With my family, mountain-biking and skiing.
What attributes do you value most in other people?
If they can stay flexible and still be purposeful.
If you were asked what you do by a friend with no technical knowledge, how would you explain your work in a single sentence?
I run a company. 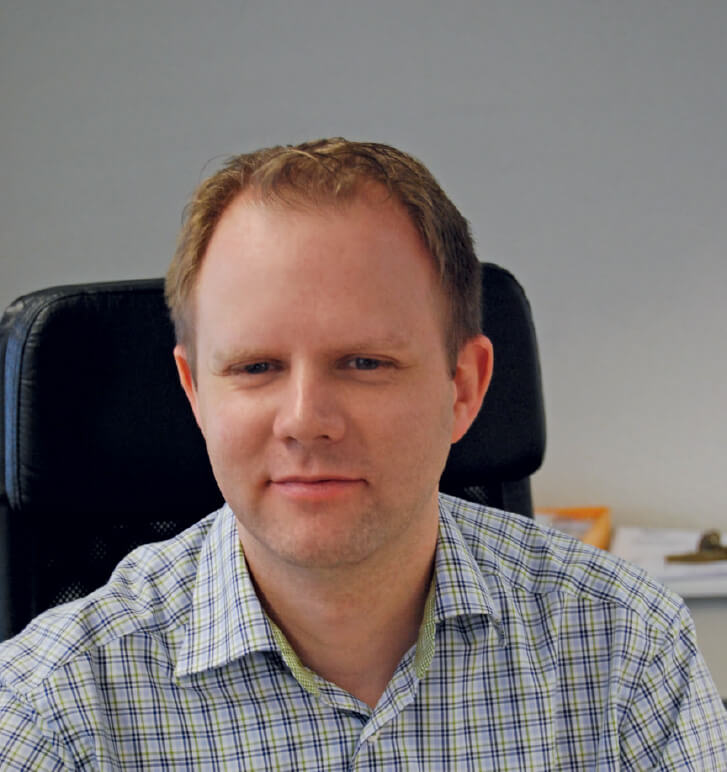