Working mainly for the automotive industry, Ing. Lang & Menke GmbH in Hemer produces small stamped and formed parts in large series. For samples and prototypes as well as for the flexible making of progressive and bending tools at short notice, the company has its in-house toolshop. The company thus also preserves and safeguards its own know-how for the required production technologies. 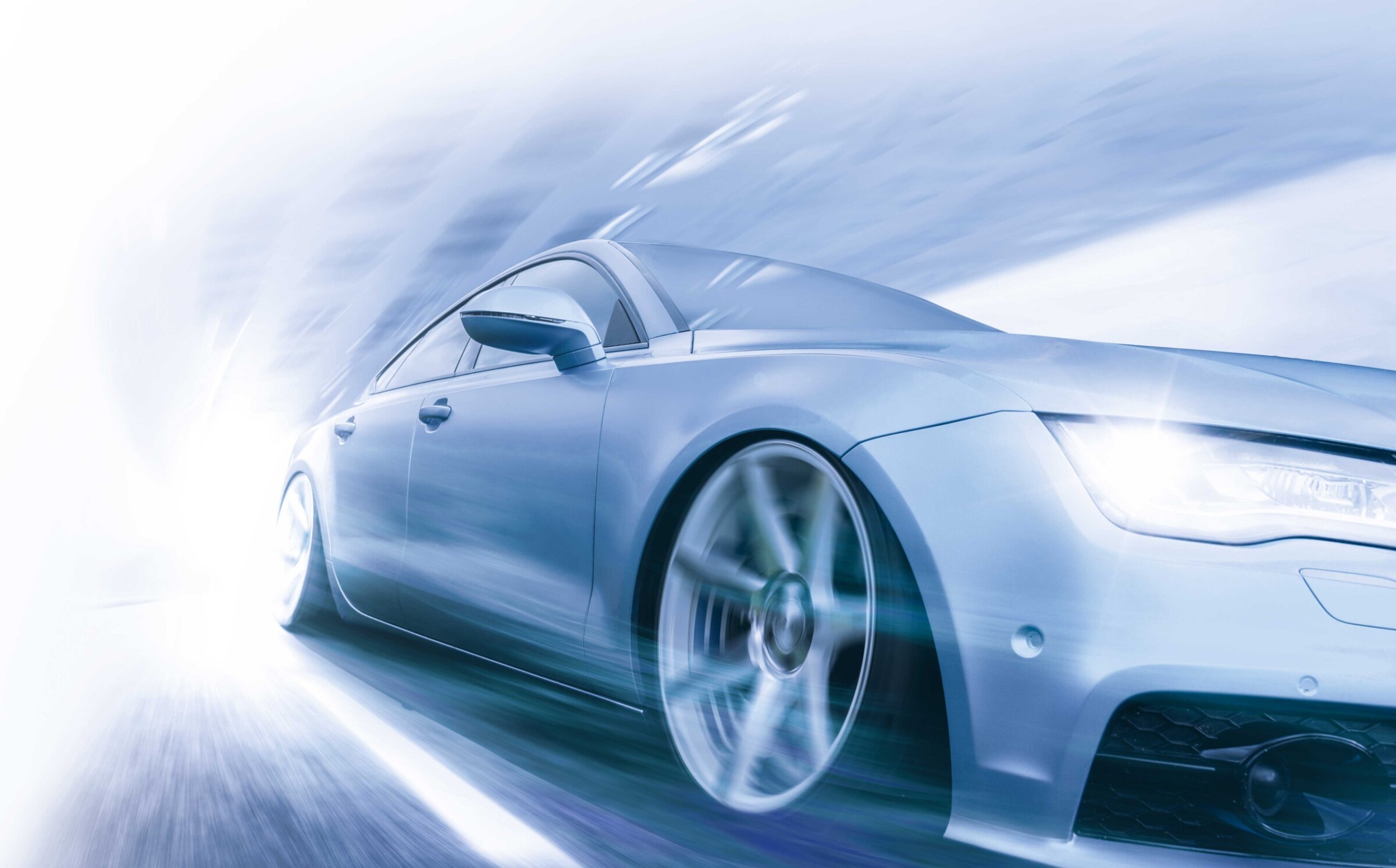 Working mainly for the automotive industry, Ing. Lang & Menke GmbH in Hemer produces small stamped and formed parts in large series. For samples and prototypes as well as for the flexible making of progressive and bending tools at short notice, the company has its in-house toolshop. The company thus also preserves and safeguards its own know-how for the required production technologies.

Speed and accuracy. MV2400R Connect in the company’s own toolshop safeguard deliveries at short notice.

The product range of the stamping shop in Hemer includes form springs, spring washers, locking elements for screw connections, bearing plates, housings for small electric motors, holders and springs for carbon brushes as well as contact and assembly elements. These components are manufactured from standard and stainless steels and non-ferrous metals with a sheet thickness of up to 2.5 mm. The company handles large series of several million components per year, produced from the strip on high-output automatic stamping and forming presses. “As a relatively small supplier with currently 240 employees, we are called upon to act flexibly. For our customers – almost all European automotive component suppliers – we have to ensure that we can deliver even changing batch sizes on schedule straight to the assembly lines on the just-in-time principle,” says Toolshop Manager Michael Schmitten in Hemer. Stamping and forming operations, he continues, therefore have a high degree of vertical integration. Included in this are the company’s own hardening shop and heat treatment as well as its own toolmaking and design activities. Components are optimised in close cooperation with customers and the production specialists within the company. This relates to both technical and economic issues, says Schmitten. Based on the experience gained over many years in stamping and forming, the specialists in Hemer design functional components that can be produced at minimum cost as simply and reliably as possible in large series on automatic stamping and forming presses with high process security. 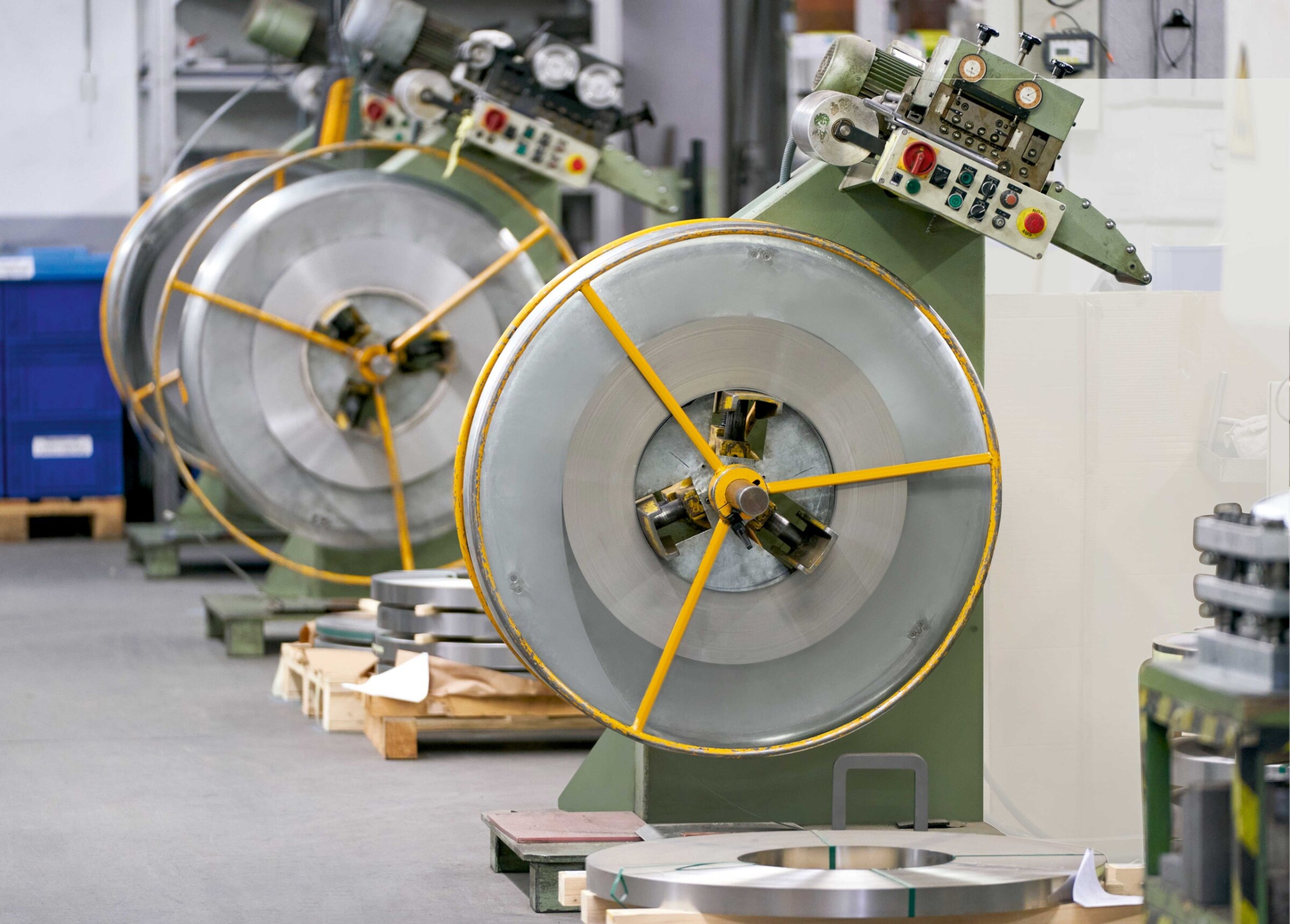 “From design engineering and the production of samples, prototypes and tools up through to large-scale series production, our specialists master all production steps. Our wide-ranging expertise enables us to work with customers in developing high-grade components and cost-effectively producing up to several million components a year in series,” Schmitten reports. To minimise the time from development and design through to the production-ready component and thus to be able to react flexibly to enquiries, the stamping and forming operations in Hemer have their own sample production and toolmaking activities. This is where prototypes for stamping and forming tools are produced and refined for series production. Thanks to the new EDM systems, it is possible to erode complete tools and thus reduce the amount of EDM work farmed out. 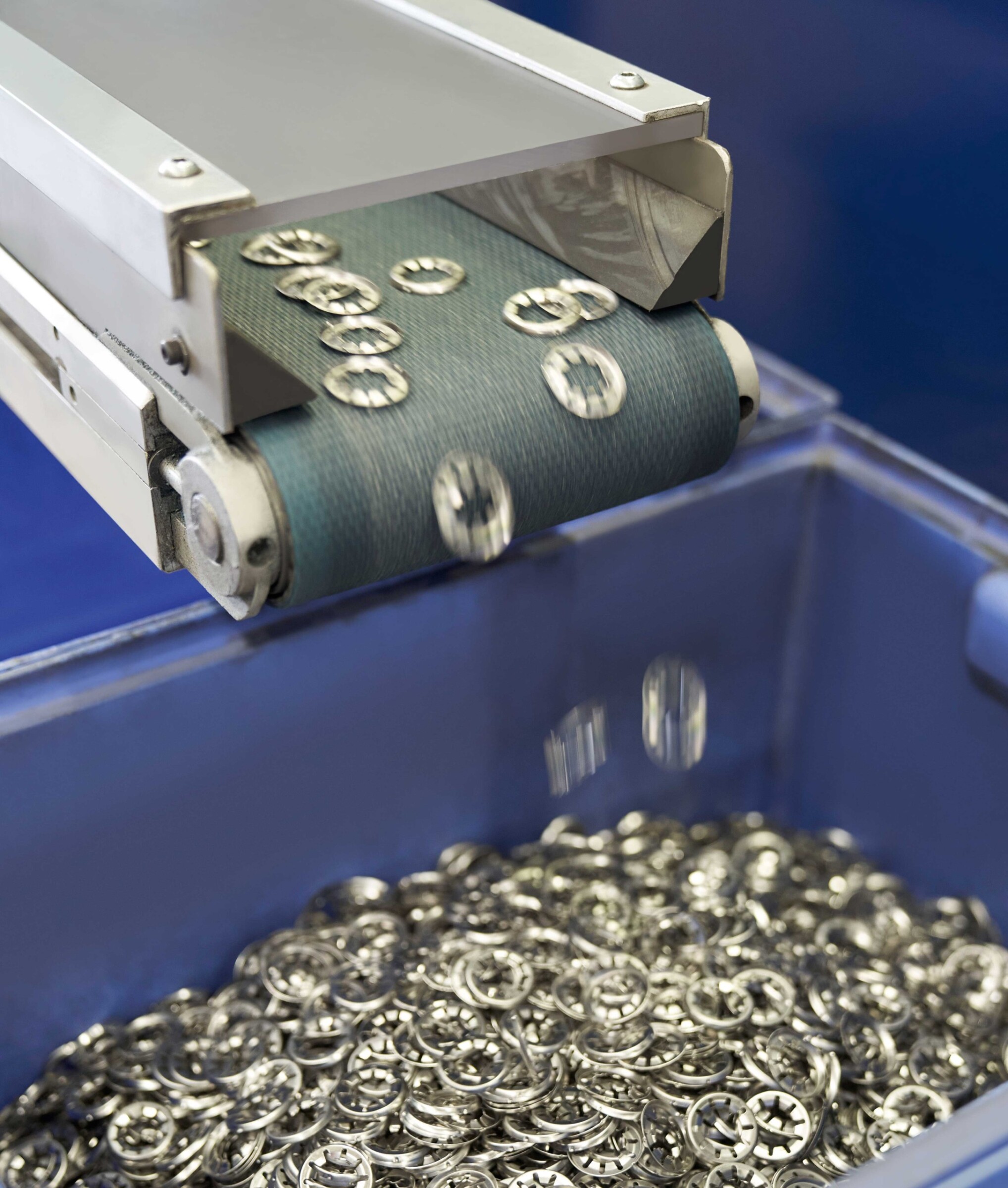 Up to several million components are produced at Lang & Menke each year.

“So that we can produce just-in-time, our automatic stamping and forming presses must achieve maximum availability. This naturally applies particularly to the tools,” Schmitten explains. That’s why the in-house toolshop handles the maintenance and repair of the numerous stamping and forming tools. This keeps distances as short as possible and ensures that faulty and worn tools are repaired and made available again for production at short notice. The main tasks involve reworking the cutting and forming parts – tool inserts – or producing new ones as replacements. They often have to have narrow grooves, geometries with minimal radii and sharp-edged penetrations with cutting contours. The technicians in the toolshop, Schmitten reports, not only machine with turning, milling and grinding operations, but often also with wire EDM. Some years ago, the company purchased for this purpose two wire EDM machine from a different manufacturer. However, due to the increasingly good to very good order situation in production in 2018 and 2019, its capacity was no longer sufficient to cope with all the pending repairs at short notice. 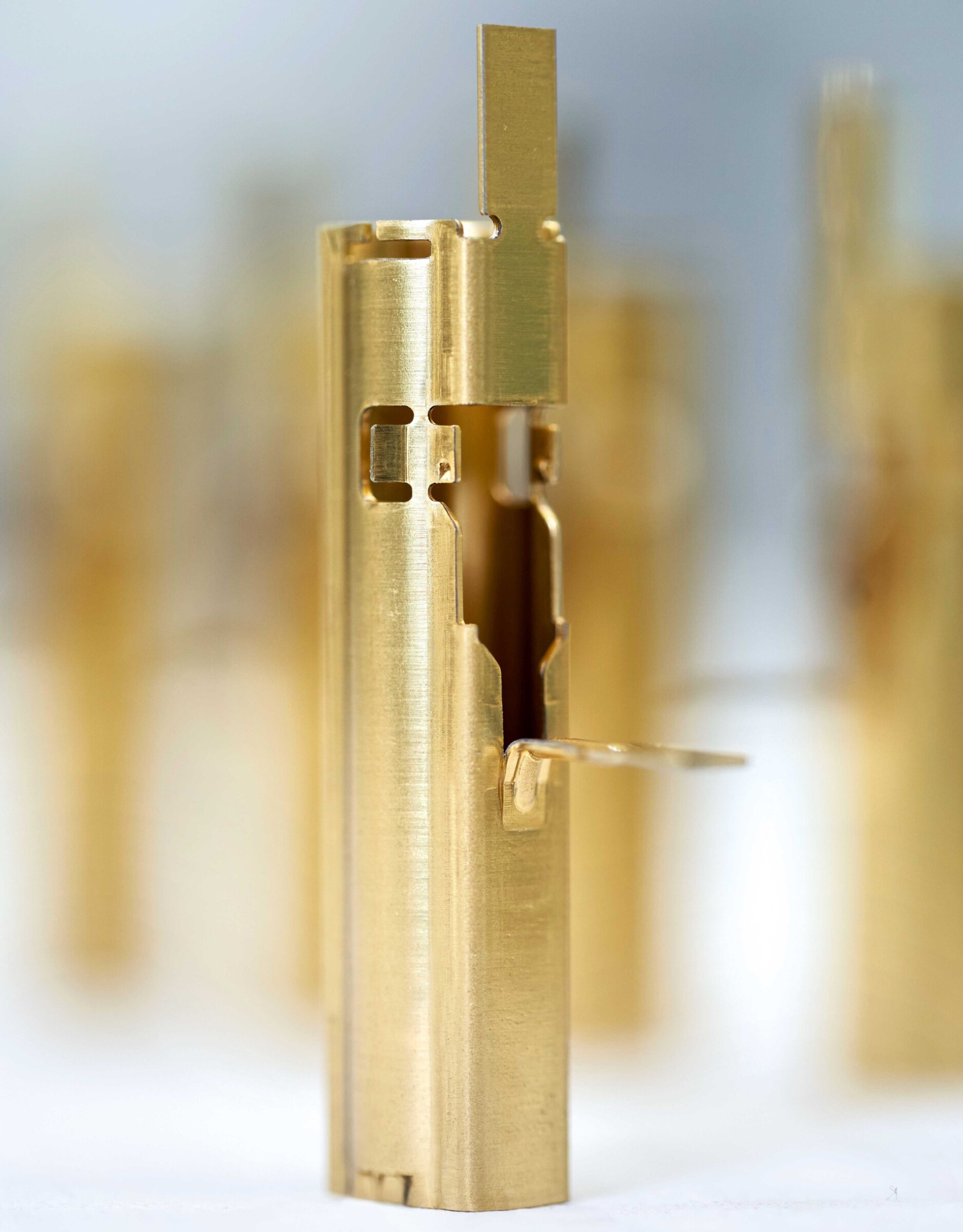 Outsourcing the machining of stamping and forming tools to subcontractors was not considered an alternative. “Awarding contracts specifically for repair work is problematic. On the one hand, it requires a great deal of logistical planning. At the same time, it is almost impossible to achieve short throughput times even with great effort. However, to maintain production for punctual deliveries, things always have to be done quickly,” says Schmitten, adding: “We also want to keep our wire EDM expertise in-house.” This is why, he continues, the company decided to invest in additional wire EDM machines in 2019. The toolmaking facilities were extended. 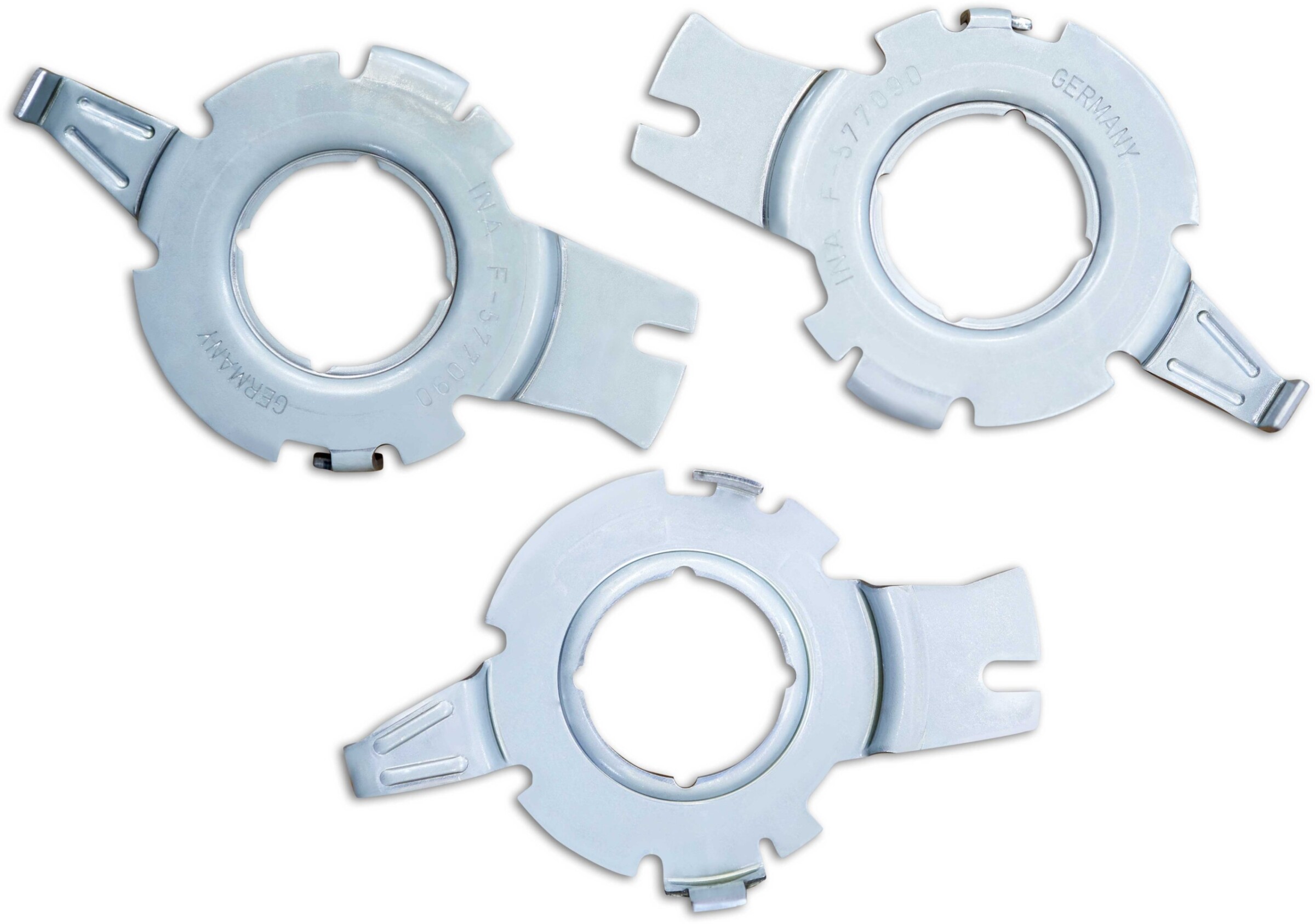 Before taking their investment decision, the specialists gathered information on the currently available technologies and machines for wire EDM. On the basis of recommendations, they concentrated on machines from Mitsubishi Electric. The Japanese manufacturer’s experts provided detailed information and advice in Ratingen. “Above all, the practical demonstrations in the Technology Center in Ratingen, which our toolmaking specialists attended, were highly impressive in all respects,” Schmitten points out. Detailed analyses revealed that the wire EDM machines from Mitsubishi Electric displayed the optimum cost-benefit ratio. The programmers at Lang & Menke were soon persuaded by the extremely user-friendly and straightforward programming and operating principle of the new control generation. “The choice of the MV2400R Connect wire EDM machines from Mitsubishi Electric has proven to be the best decision in recent years,” Schmitten stresses. 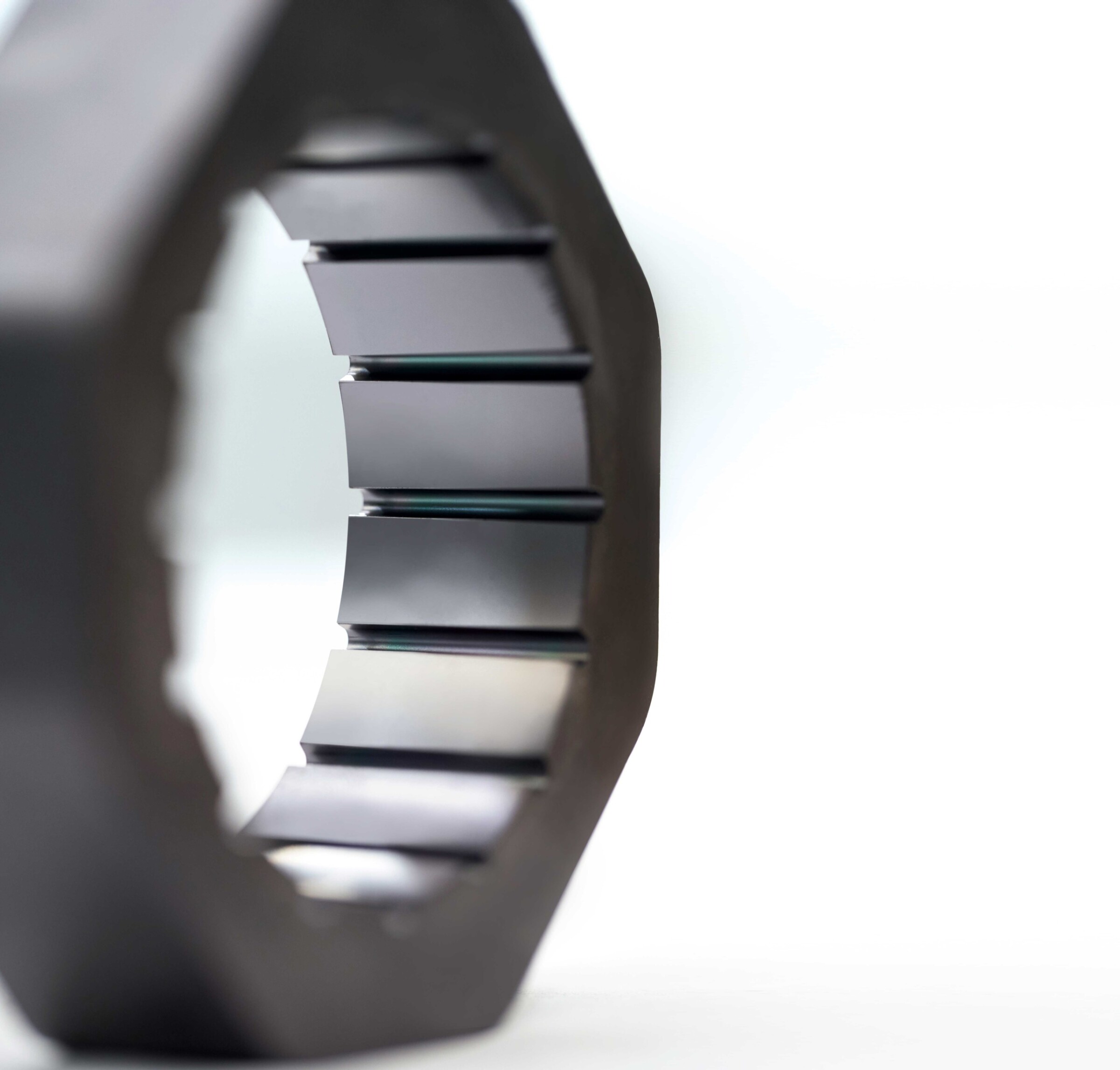 Maximum precision counts in the production of replacement parts for stamping tools.

Quickly up and running

This decision was subsequently vindicated by the rapid pace of installation and commissioning through to the first produced spare parts for stamping tools. This took only four days, Schmitten adds. This was a particularly positive surprise for him, as his past experience of other machine manufacturers has been anything near as good. The specialists in the toolshop in Hemer had already undergone initial training during commissioning and learned about the machines’ functions. They found Mitsubishi Electric’s service technicians to be highly competent, skilled and helpful. In face-to-face meetings they impart the necessary specialist knowledge as well as tips and tricks for daily practice. Further, five-day training courses in Ratingen then provided the toolmaking staff with the necessary skills to work reliably and productively with the wire EDM machines. 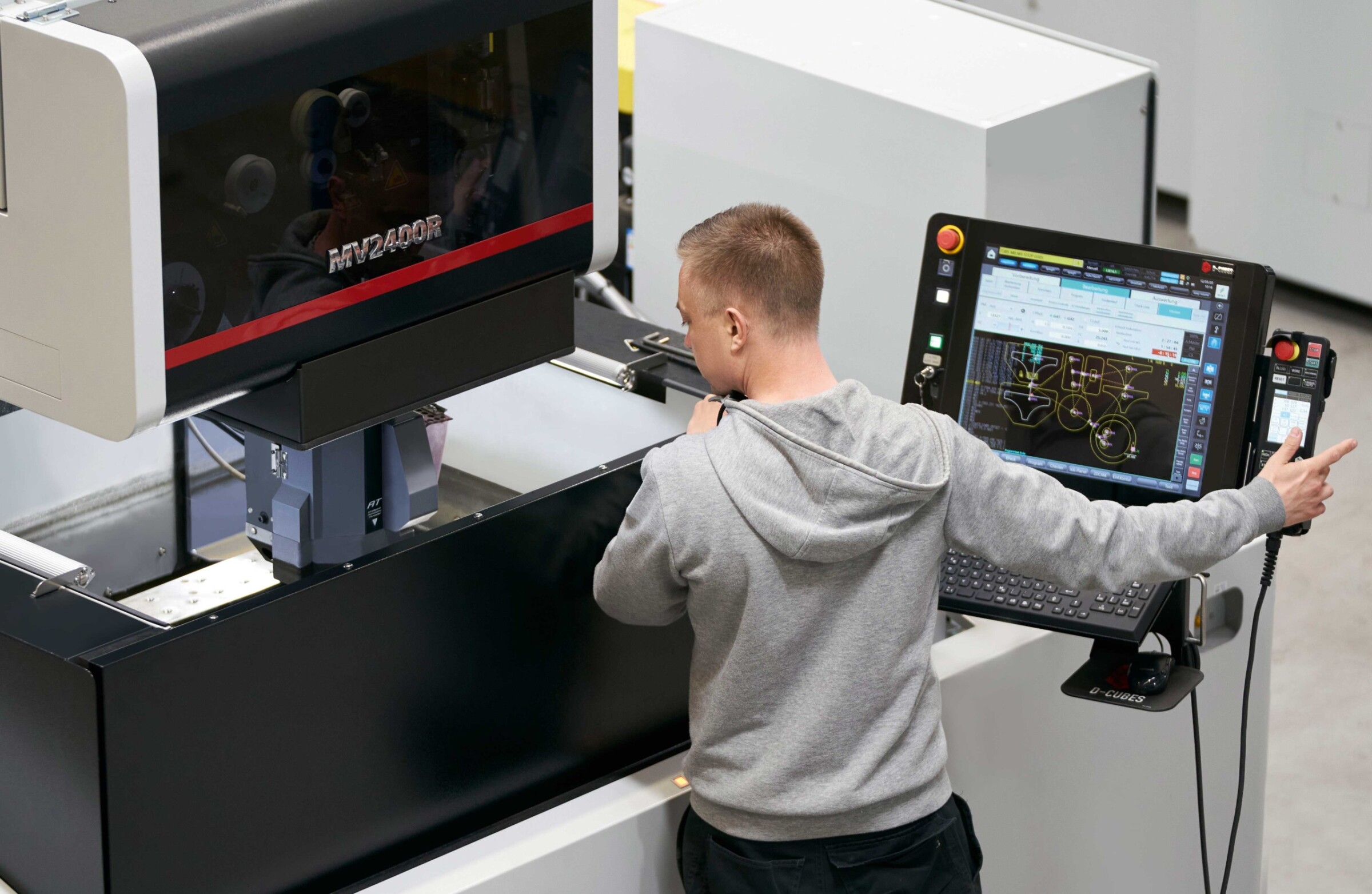 Thanks to the readily accessible workspace and neatly arranged touch screen, toolmakers always have everything under control.

In Schmitten’s view, a particular advantage of the MV2400R Connect machines over the wire EDM previously used is the significantly faster throughput, making it possible to respond very flexibly and quickly to demands for the repair of tools at short notice. Programming simplicity, Schmitten believes, is one contributory factor. At Lang & Menke, the NC programs for the wire EDM machines are generated externally on the PEPS programming system from Camtek. The database for material and geometry parameters integrated there is easily connected to the control of the wire EDM machines. The NC data are transmitted directly via data line. At the machines, the current control system shows the entered parameters and operating elements clearly and comprehensibly on the large touch screen. The machine operators have found that the MV2400R Connect wire EDM machines can also be mechanically tooled and set up quickly and conveniently. This is ensured by the readily accessible workspace. During cutting, they operate up to 15 per cent faster than the previously used wire EDM machine. The extremely reliable automatic wire threader also contributes to high productivity and prevents unnecessary stoppages. At Lang & Menke, the two MV2400R Connects mainly run in two shifts, as the machine operators often have to retool to produce changing spare parts. Thanks to the reliable wire threader, they can operate several machines at once. In the case of complex tool inserts with long cutting paths, they allow the machines to work unattended into a third shift. Even then, the dependable wire threader keeps the wire EDM machines running productively without interruption, contributing significantly to rapid throughput and maximum flexibility. 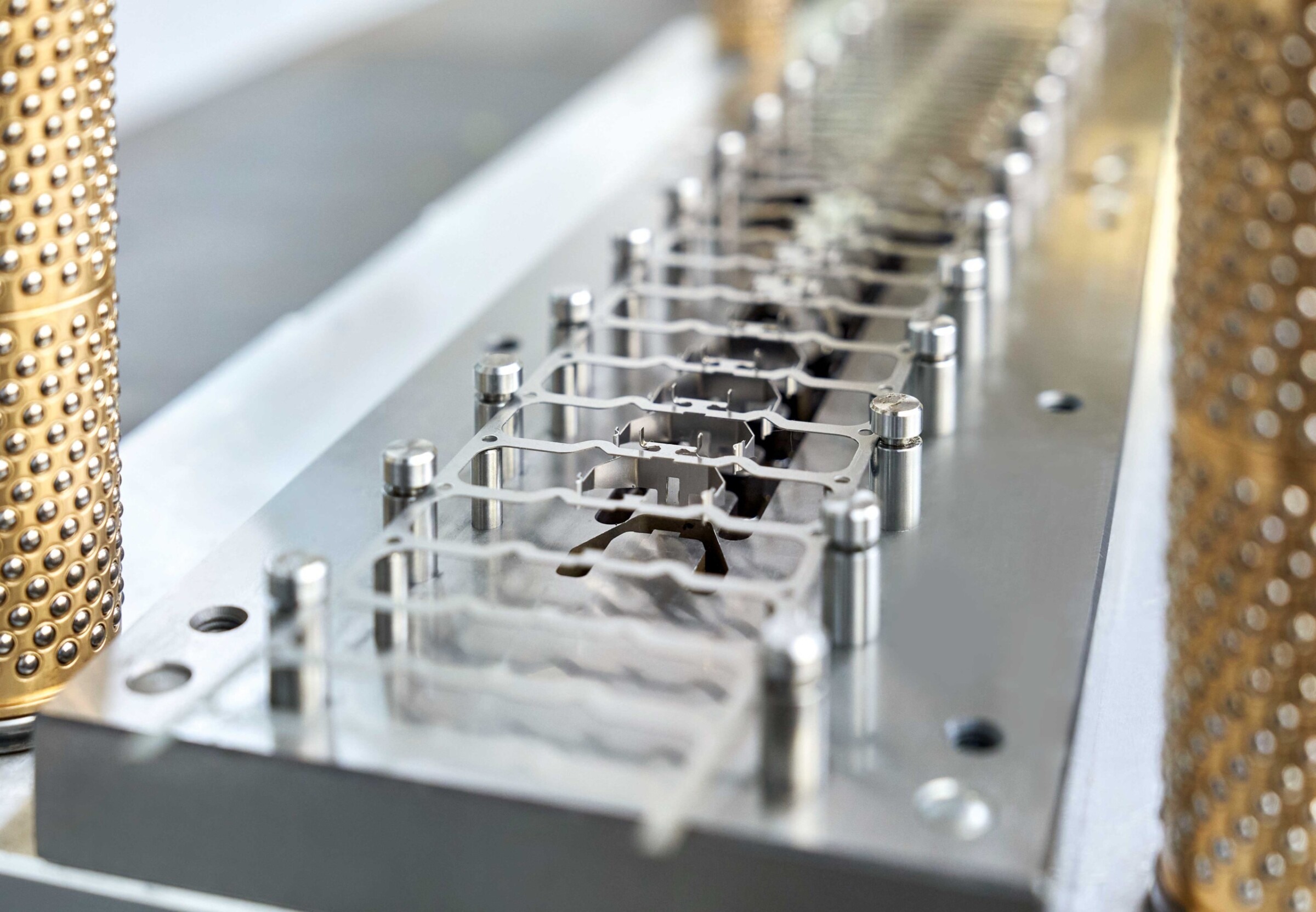 For the toolmakers in Hemer, the accuracy of the wire cutting machines is also a decisive factor. “Especially when producing spare parts, the focus is on accuracy. This has a large bearing on the function of the repaired tools and the quality of the components produced,” Schmitten explains. Multiple stamping and forming tools have to be machined to absolutely identical tolerances. Even components of large series produced in individual batches on different stamping machines and tools must not differ from each other and must exhibit the same component tolerances and properties. In addition, replacement parts for worn tool components must fit exactly into the surrounding components of the existing tools. “To ensure this, repeatability in the production of spare parts is crucial. On Mitsubishi Electric’s wire EDM machines, we effortlessly achieve accuracies of less than a hundredth of a millimetre. That’s what makes these machines so valuable to us,” Schmitten emphasises. Thanks to the high precision and quality of the wire-cut components, the toolmakers in Hemer minimise the amount of reworking required. “In this way, the MV2400R Connect wire EDM machines contribute significantly to productive and flexible operations in the repair of stamping and forming tools,” says Schmitten summing up the benefits. At Lang & Menke in Hemer, all the specialists are so impressed by Mitsubishi Electric’s future-oriented and mature technology that they invested in a third MV2400R Connect at the beginning of 2020. 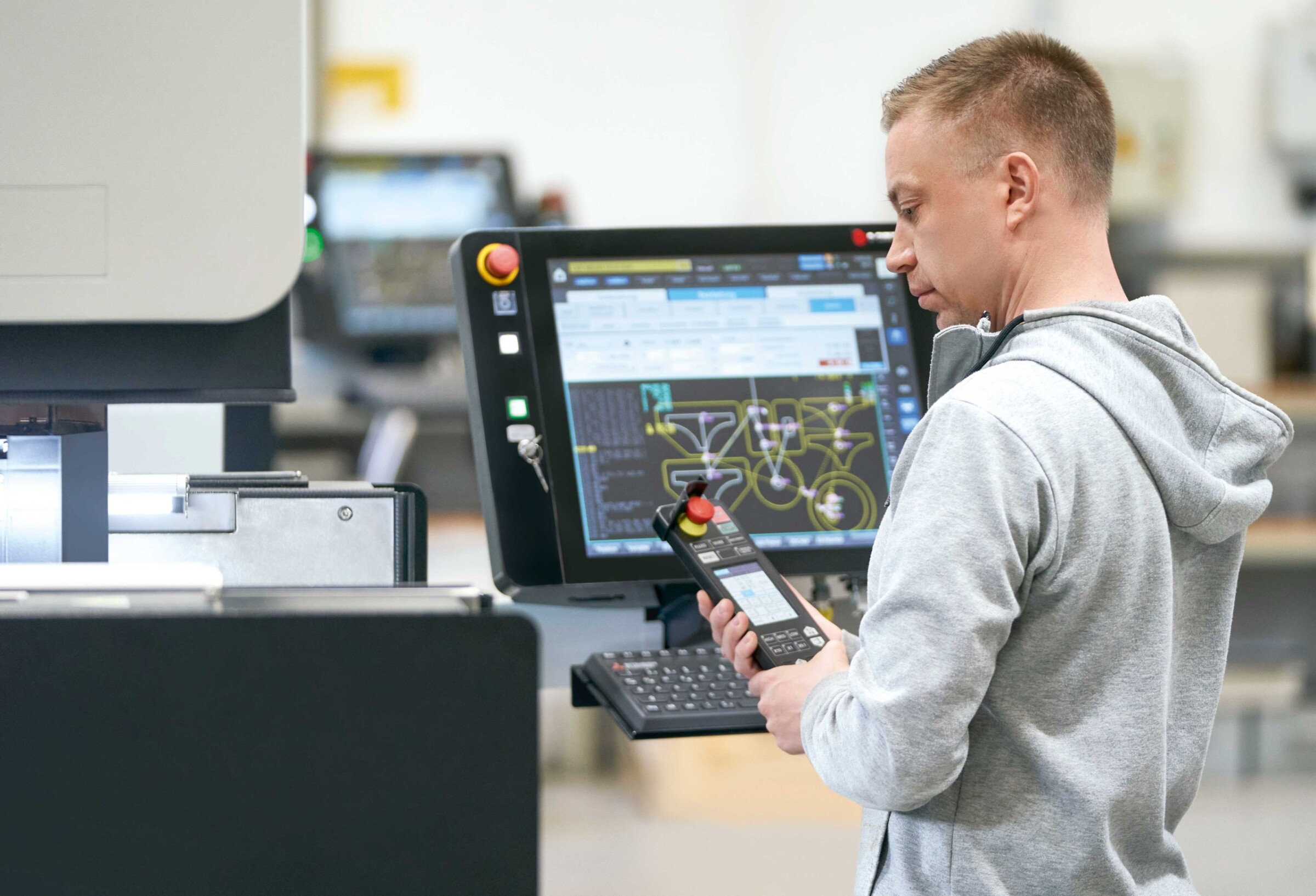 On Mitsubishi Electric’s wire EDM machines, we effortlessly achieve accuracies of less than a hundredth of a millimetre. That’s what makes these machines so valuable to us.

Over 70 years of success 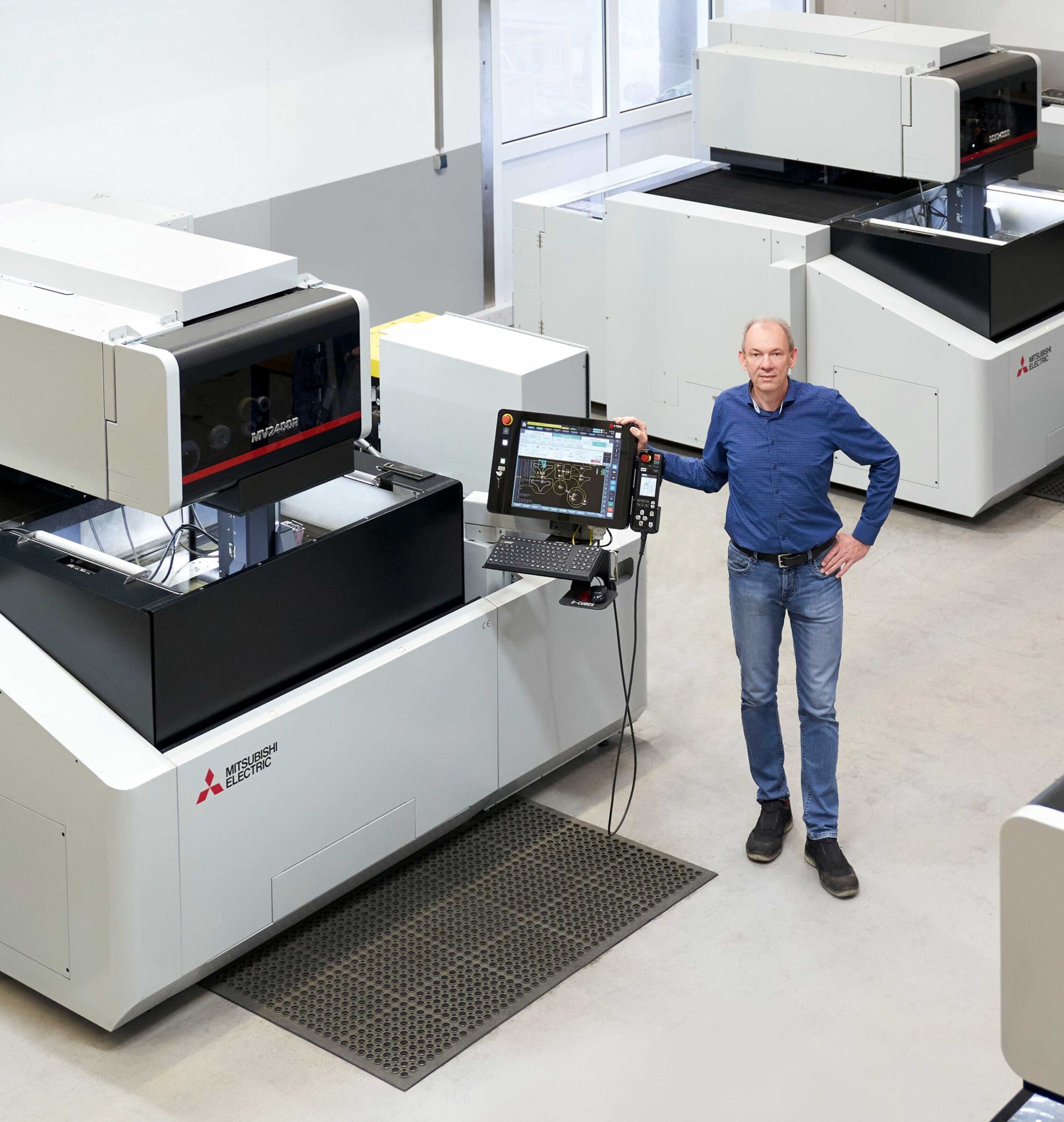 The choice of the MV2400R Connect wire EDM machines from Mitsubishi Electric has proven to be the best decision in recent years.

Core business:
Production of high-quality stamped and formed parts from up to 2.5 mm thick sheet metal in large series (mainly for the automotive industry), development and design of components, and stamping and forming tools as well as in-house toolmaking for prototypes, samples and repairs, plus, since 2005, the injection moulding of composite metal-plastic parts at Lang & Menke Kunststofftechnologie GmbH