Rathgeber GmbH in Innsbruck ranks among the world’s leading specialists in tightly meshed, visually and acoustically sophisticated plastic grilles for the car interior. To machine the complex injection moulds, the Innsbruck company relies on two MV2400R systems. These constitute the ideal combination of compact design and large workspace and operate highly reliably with little operator supervision. 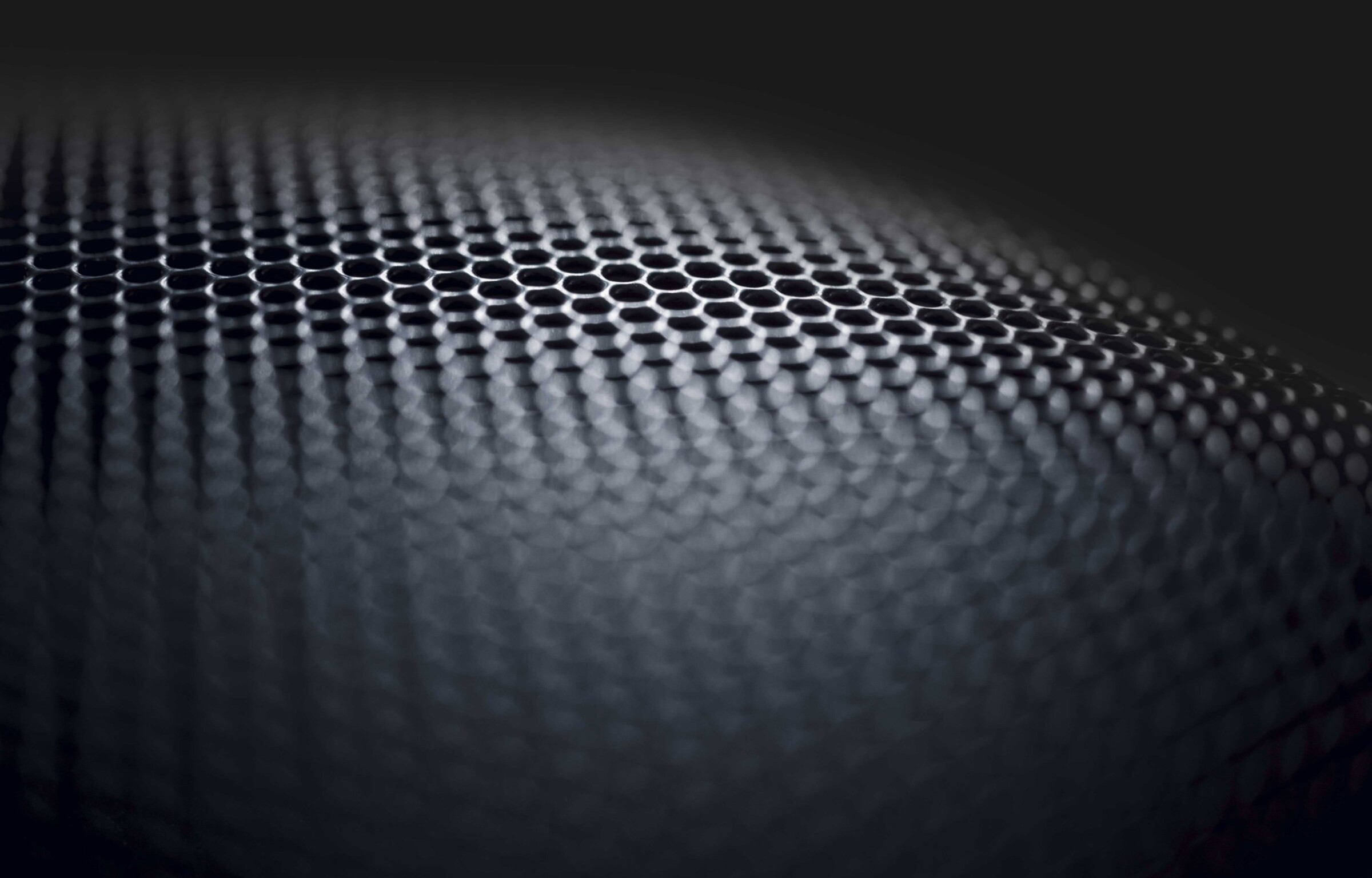 Rathgeber GmbH in Innsbruck ranks among the world’s leading specialists in tightly meshed, visually and acoustically sophisticated plastic grilles for the car interior. To machine the complex injection moulds, the Innsbruck company relies on two MV2400R systems. These constitute the ideal combination of compact design and large workspace and operate highly reliably with little operator supervision.

“Our aspiration is to be the world’s best mouldmaker in our core business areas,” says the head of change management at Rathgeber GmbH in Innsbruck. The Austrian tool- and mouldmaker is a force to be reckoned with and highly valued in the automotive industry. For several decades, the company has been specialising in producing technically and visually high-grade components for the vehicle interior. As regards grilles for the sound systems in quality limousines and luxury sports cars, they enjoy an outstanding reputation as an exceptionally skilled supplier to car manufacturers. The Innsbruck engineers work together closely from design and mouldmaking through to the injection moulding of prototypes and pilot series to test and verify the demanded properties. The grilles have to be visually appealing, e.g. always showing the same structures from different viewing angles. And they also have to upgrade the acoustics of the protected loudspeakers to ensure the best-possible sound experience. 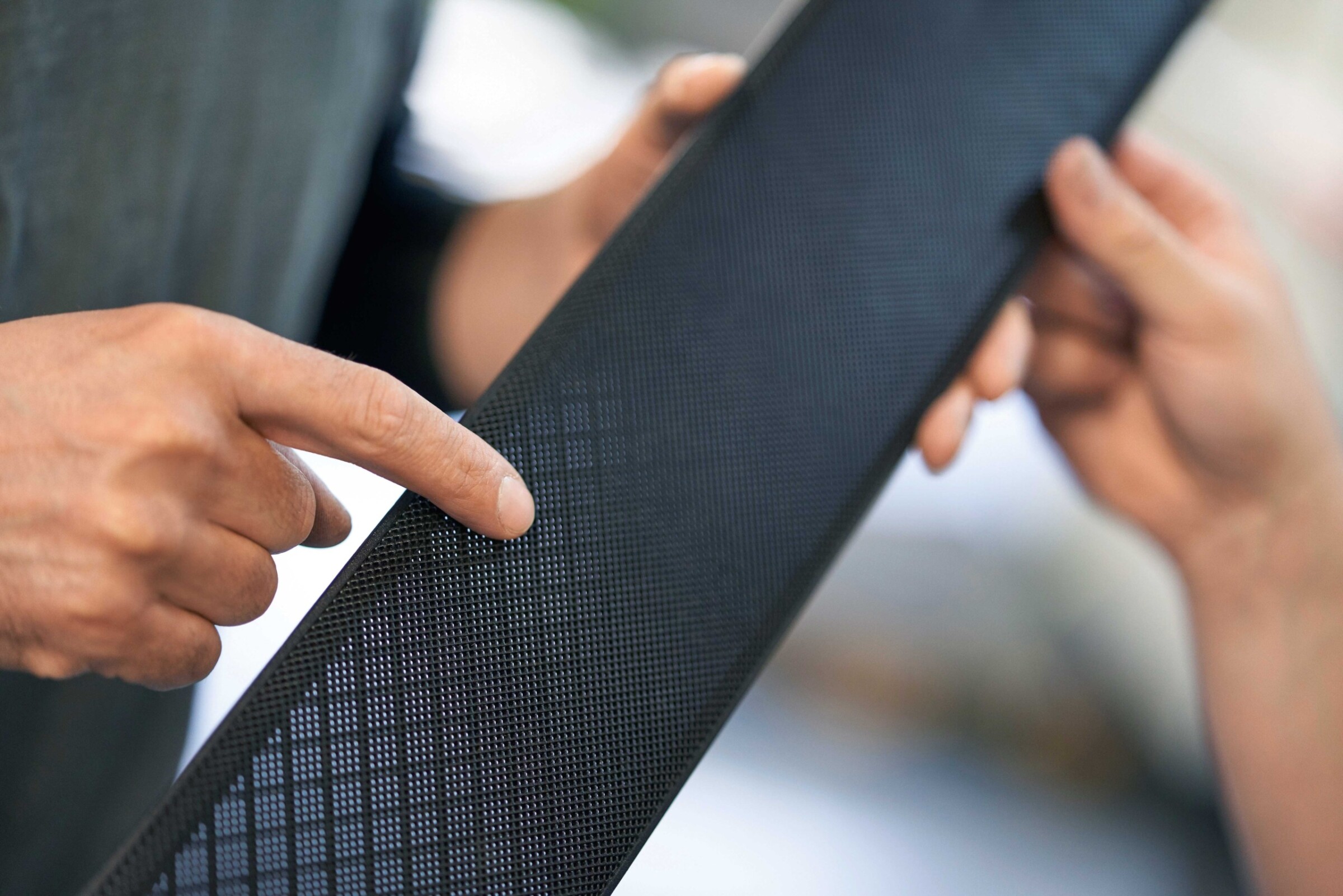 Technically and visually premium-class: High-grade grilles from Rathgeber are in big demand from manufacturers of quality limousines and sports cars.

The grilles developed in Innsbruck in cooperation with car makers are produced in large series and are injection moulded using thermoplastics. Because of the tight mesh, 3-dimensional curvature and in most cases specially designed webbing, the grilles call for ingenious and complex injection moulds. To release the fine grille webbing, which is very susceptible to kinking after injection moulding, the mould inserts are provided with a multitude of ejector pins only 1 to 3 millimetres in diameter. For grilles measuring roughly 250 x 120 mm, there can be well over 100 pins. The bores for the pins have to be produced with accuracy to the nearest 0.01 mm in terms of diameter and position. As the EDM team leader at ­Rathgeber in Innsbruck reports, such structures and geometries can only be produced with wire EDM. This applies particularly in view of the high warm hardness of the mould inserts of hardened steel. 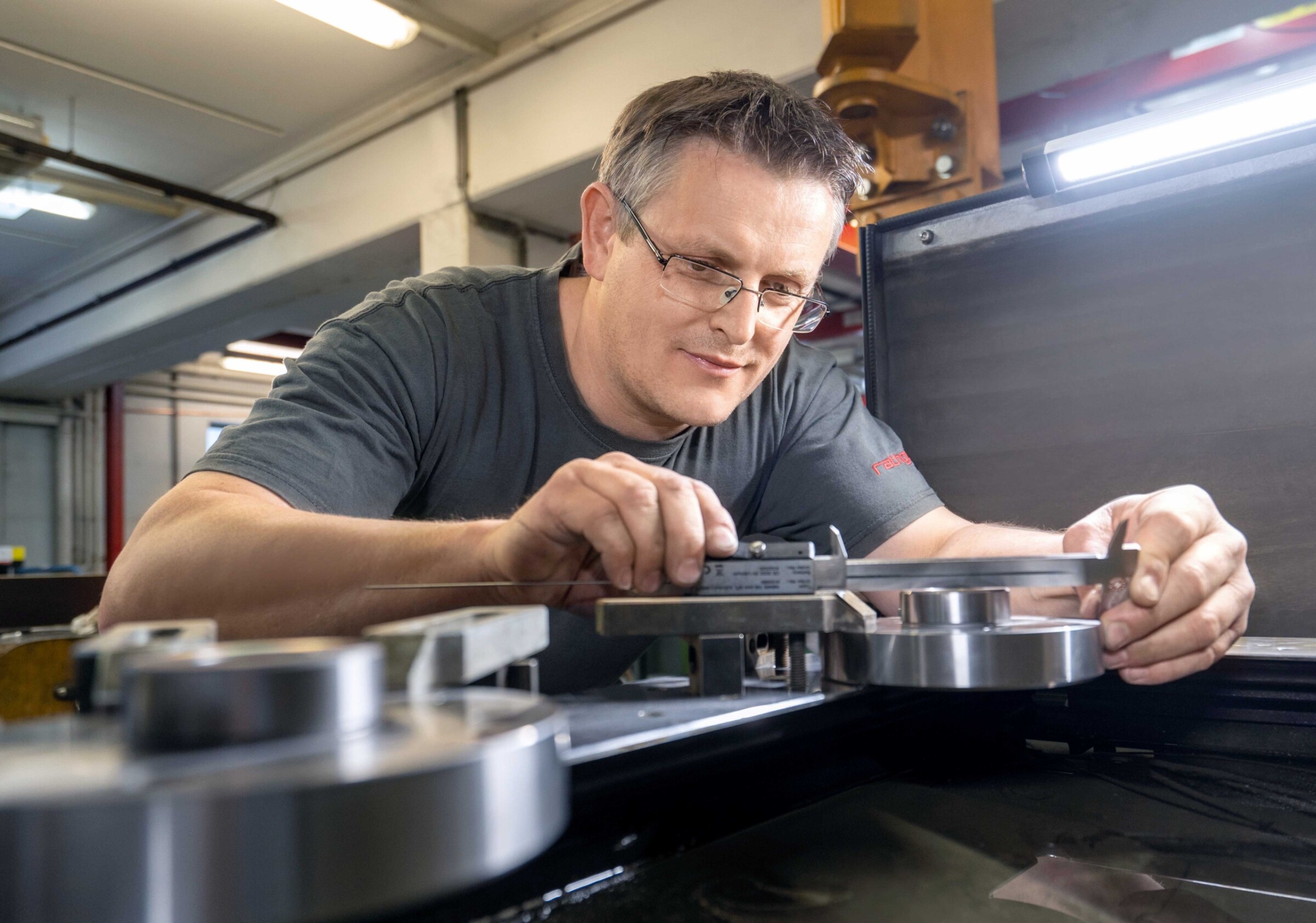 The quality of wire-cut components is meticulously checked with an eye for precision.

Sophisticated grilles for the car interior.

In addition, the injection moulds have to be provided with a large number of penetrations for slides. These geometries can also only be cost-effectively realised with wire EDM. The team leader explains: “Because of the highly challenging geometries of the injection moulds, we looked into wire-cutting in mouldmaking as soon as we became aware of the technology. Since then we’ve acquired a wealth of expertise.” The Innsbruck mouldmakers also use wire EDM to machine stamping and pressing tools, e.g. for grinding wheel manufacturers, under subcontract.

For the mainly two-dimensional grilles, the injection moulders need very large mould inserts. The specialists at Rathgeber can only produce these on wire-cutting machines with large machining ranges. This was one of the reasons why the Innsbruck toolmakers invested in the MV2400R from Mitsubishi Electric. “Our previous machines were wearing out. So last year we gathered detailed information on current technologies and machine equipment from a number of manufacturers. Amongst other things because of the excellent combination of compact design and large workspace, we chose the MV2400R from Mitsubishi Electric,” says the EDM team leader. The mouldmakers commissioned the first MV2400R in Innsbruck in September last year. “It proved to be up to the task after only a few weeks,” says the EDM team leader. It was joined by an MV2400R Connect at the turn of the year. 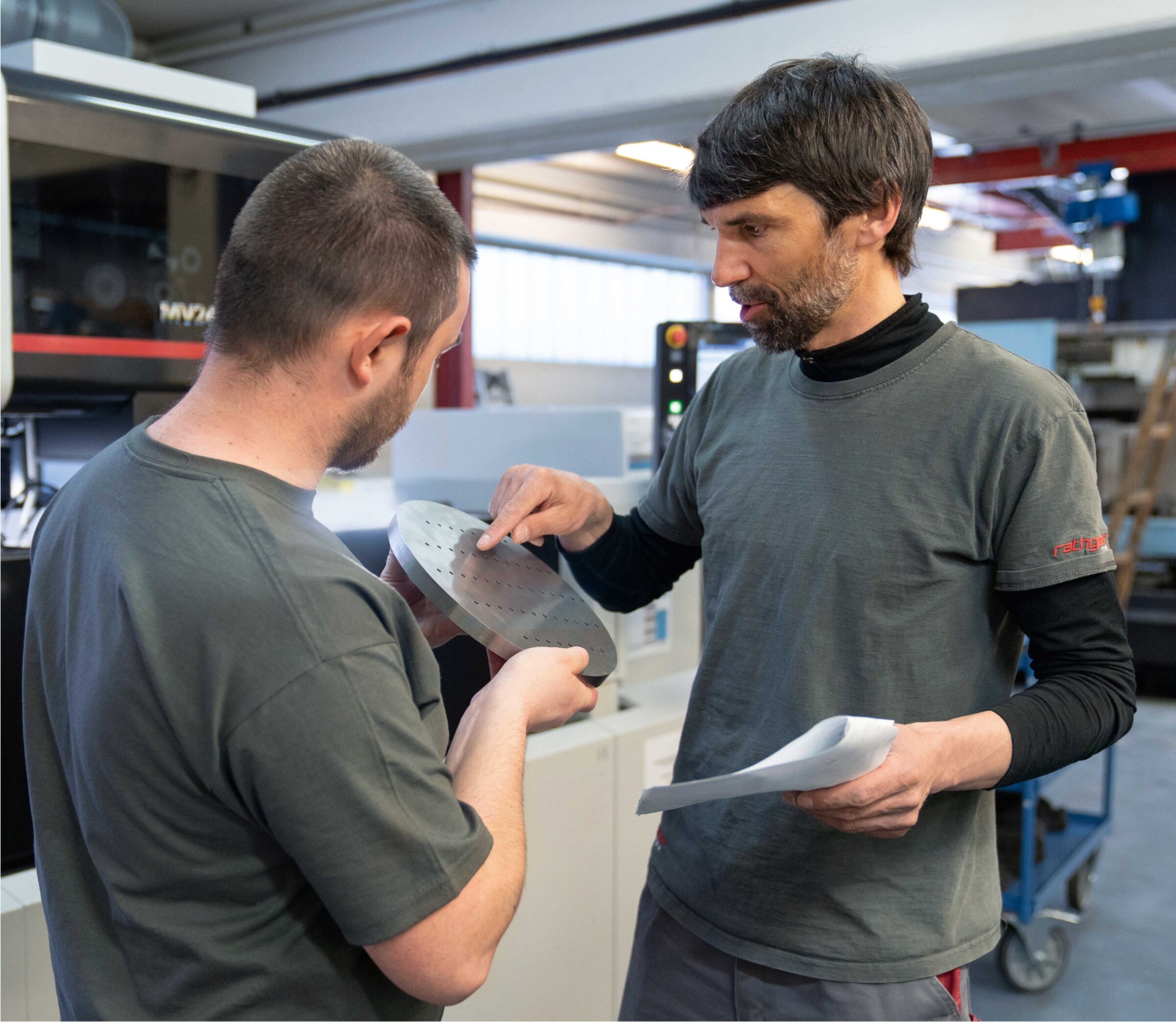 Always aiming for the optimum: The EDM team ­leader in conversation with a wire-cutting colleague

Wire threading is so reliable …

In the view of specialist staff at Rathgeber in Innsbruck, the wire-cutting machines from ­Mitsubishi Electric are easy to operate and program. At Rathgeber, the CNC programs are produced from the 3D CAD data on an external CAM system. In doing so, they set the process parameters that they have arrived at and established on the basis of years of experience. In the toolshop, the only remaining task is to clamp the plates, equip the wire EDM systems and start the CNC program.

Unsupervised thanks to exceptional dependability

The EDM team leader considers exceptional dependability to be another advantage of wire-cutting. “Because of the long machining times, the wire-cutting process can take place largely unsupervised,” he says. This applies particularly to large components on which a wide range of contours have to be cut. At the same time, the EDM team leader considers Rathgeber to be a special case in the mouldmaking sector. “On mould inserts for the injection moulding of high-grade grilles, a large number tiny geometries have to be cut. For this, the wire-cut EDMs need above all a sound and extremely dependable wire threader.” He stresses that the MV2400R from Mitsubishi ­Electric has fully met his requirements. “We can program even the most complex geometries and intricate structures, set up the machines and have no misgivings about running the machines during weekend shifts. The wire threader is so dependable that we always start the new week with fully machined components,” ­the EDM team leader continues. The MV2400R creates hundreds of tiny bores for ejector pins without difficulty and unmanned thanks to its high reliable automatic Intelligent AT wire threader. The optionally installed wire station for 20 kg reels contributes to interruption-free operation. 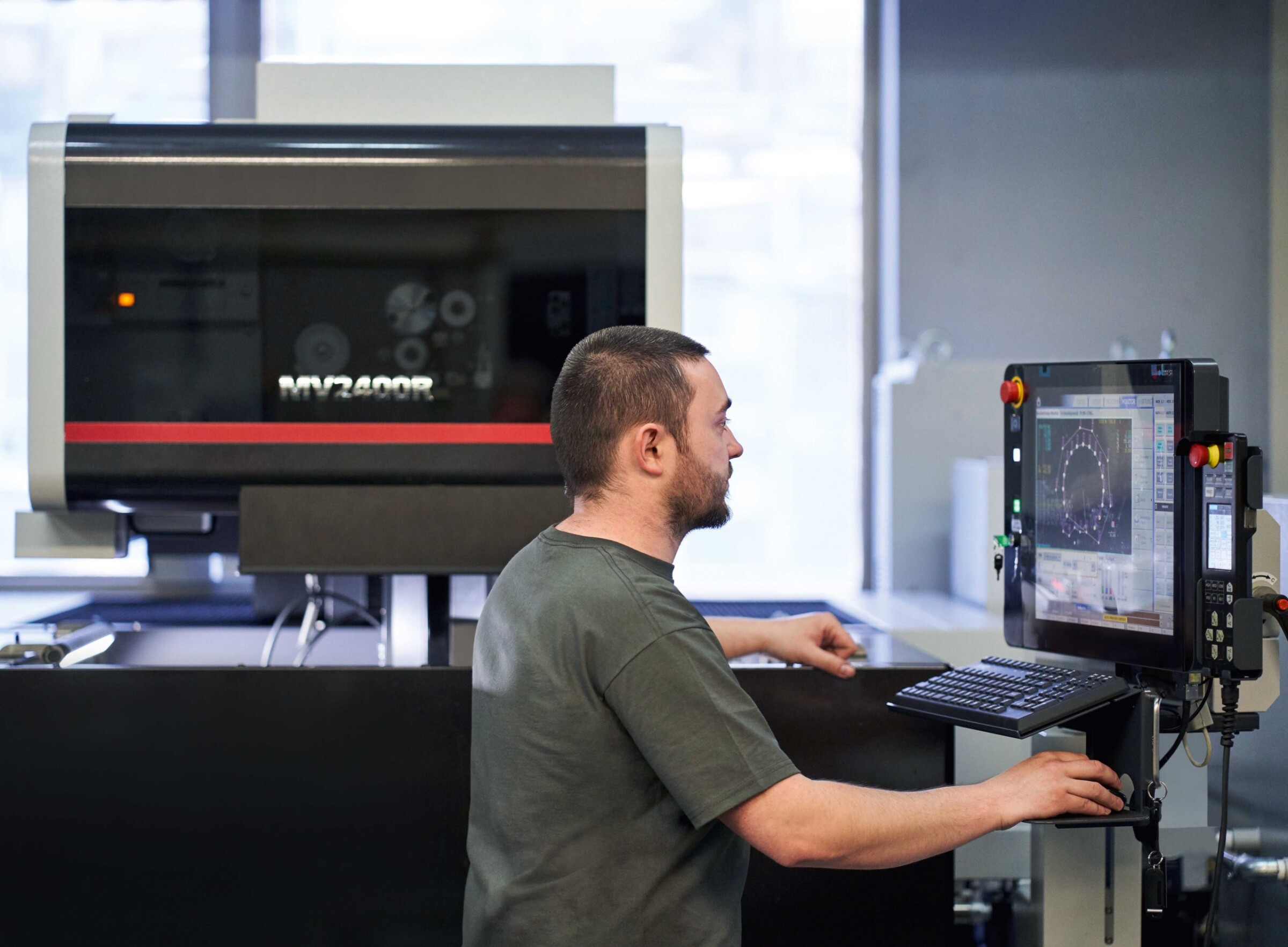 Trusting in mature technology, the specialists in Innsbruck have fully accepted the MV2400R ­wire-cutting machines thanks to their ­­straightforward operation.

The mouldmakers at Rathgeber in Innsbruck also particularly appreciate the highly cost-effective opera tion of the MV2400R. On the basis of their experience, these machines need much less maintenance than the previous and comparable systems from the competition. In addition, the use of brass wire reduces operating costs. On top of this, there is the optimum combination of high cutting speed, sufficient accuracy to well below 0.01 mm and high surface quality, as the mouldmakers in Innsbruck report. Thanks to the straightforward and comfortable operation at the touchscreen, the skilled staff at Rathgeber totally identified with the technology from the outset and fully exploited the benefits of the MV2400R – one of these being its high flexibility.

Highly satisfied on all counts.

“We can either machine single, large components on these machines or cut a large number of smaller parts from a single, large plate. This ensures a high machine workload and boosts our capacity,” the EDM team leader explains.

Finally, the specialists at Rathgeber value the expert after-sales service of manufacturer Mitsubishi Electric and its regional agent Büll & Strunz – service which is always available at short notice. Six days per week, the manufacturer’s service technicians are available by phone and email with expert advice on the operation and functioning of the wire EDM systems. His own operators, the EDM team leader continues, were instructed and schooled by skilled trainers during the commissioning of the MV2400R in Innsbruck. Thanks to the particularly simple and user-friendly program structure of the Advance Plus CNC control, this took only a few days. The mouldmakers in Innsbruck were positively surprised by this, which sets the MV2400R clearly apart from machines of rival manufacturers. 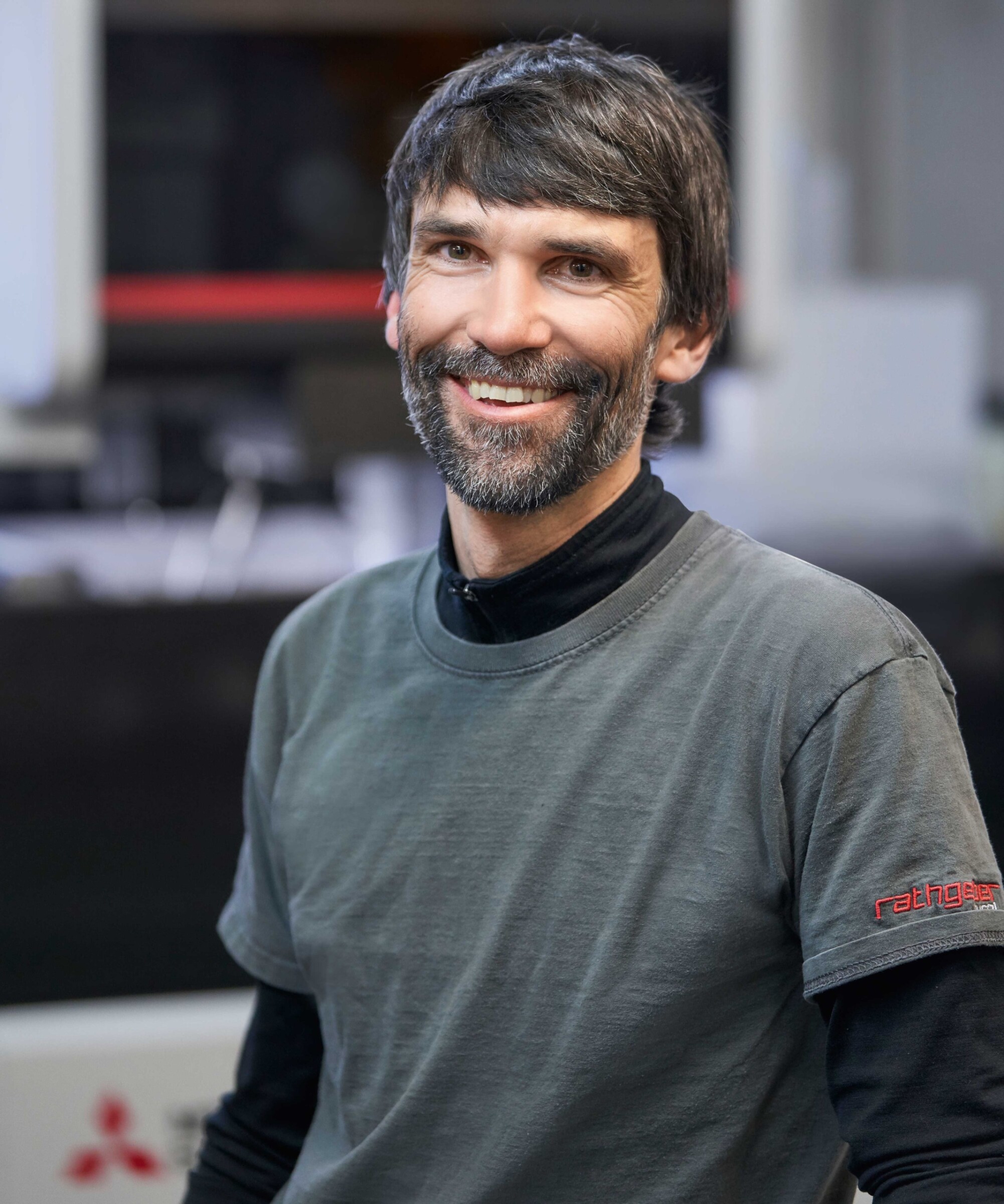 EDM team leader: “We’ve been highly impressed by the service and expertise.”

Summing up, ­Rathgeber is both highly satisfied with the performance and equipment of the MV2400R from ­Mitsubishi Electric after the first few months of ­experience. These wire-cutting machines have fully met their expectations of and demands for efficient, flexible and process-secure wire-cutting.

On mould inserts for the injection moulding of high-grade grilles, a large number tiny geometries have to be cut. For this, the wire-cut EDMs need above all a sound and extremely dependable wire threader. 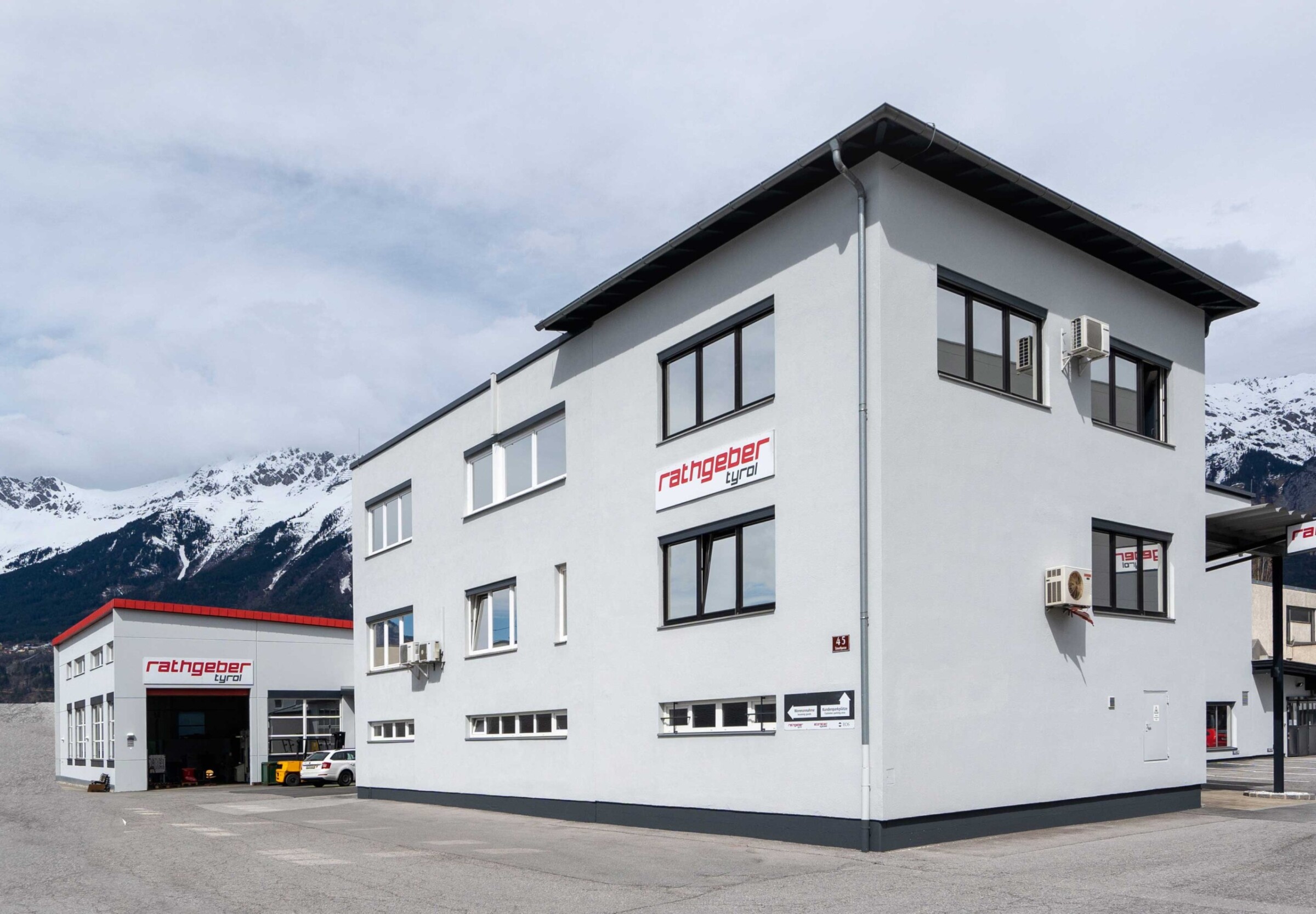 Rathgeber in Innsbruck contributes its expertise to the vehicle interior.