The best is yet to come

If a jobshop wants to stay competitive, it has to continually improve its processes and work more flexibly and inexpensively. Frédéric Lorentz in Esbly, France, owner and Managing Director of the production company of the same name, therefore has a keen interest in forward-looking technologies. Read on to find out how he boosts his flexibility and productivity and saves energy with his dependable MV2400R wire erosion machine. 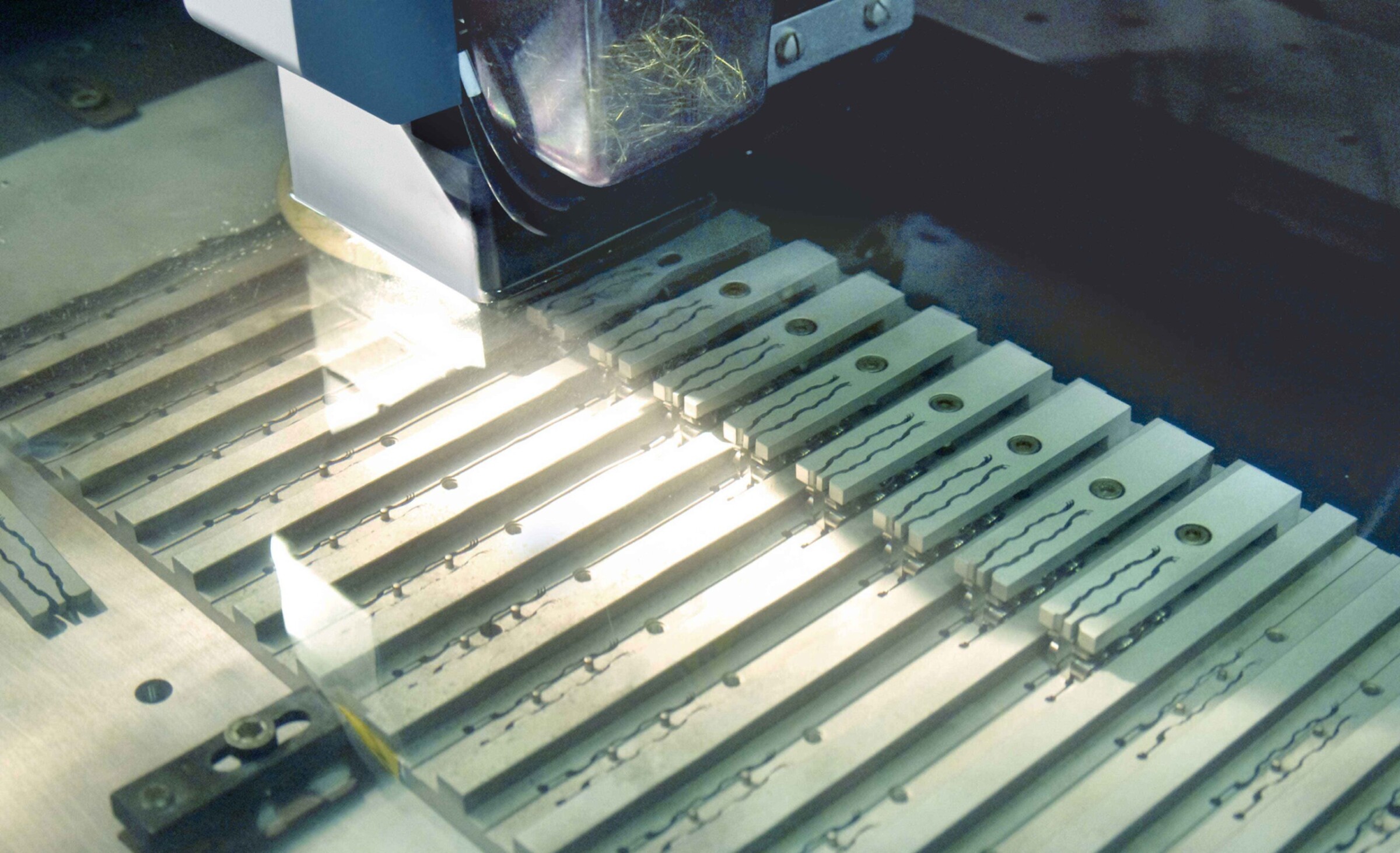 MV2400R wire-cut EDM does the work of two

If a jobshop wants to stay competitive, it has to continually improve its processes and work more flexibly and inexpensively. Frédéric Lorentz in Esbly, France, owner and Managing Director of the production company of the same name, therefore has a keen interest in forward-looking technologies. Read on to find out how he boosts his flexibility and productivity and saves energy with his dependable MV2400R wire erosion machine.

The best is yet to come. MV2400R wire-cut EDM does the work of two.

Frédéric Lorentz enjoys looking ahead. Asked about what he is particularly proud of in his career to date, he replies with a confident smile: “The truly important realisations and successes are yet to come.” It is on the basis of this philosophy that he runs his production firm in Esbly in the second generation. His father founded the business as a jobshop back in 1974. From its small beginnings, the firm has evolved into an internationally recognised supplier to medical technology and aerospace. The firm grew particularly strongly from 1995 to 2005, and today over 80 skilled employees machine mainly cubic workpieces of aluminium, low- and high-alloy steel and titanium on 42 machining centres, 25 of which are 5-axis. “We relish special challenges particularly. Our strength lies in the production of difficult components that can only be fabricated with ingenious machining strategies,” says Lorentz explaining his company’s positioning. He doesn’t allow himself to be distracted by the general political and economic climate. In his view, pioneering ideas always have good chances of surviving crises unscathed. And this entails making skilful use of special machining technologies and innovative machines. This is why, several years back, he added wire-cutting on machines from Mitsubishi Electric to his range of activities.

With the MV2400R wire-cut EDM purchased about a year ago, Lorentz sees himself at the cutting edge of technology. “This machine belongs to the fourth generation of wire-cutting machines from Mitsubishi Electric in our company. We’ve gone back to the same manufacturer again and again because our experience so far has been very good,” Lorentz reports. He is particularly impressed by the fact that the developers and design engineers at Mitsubishi Electric have repeatedly taken up ideas and suggestions from the field in the on-going refinement of their wire EDMs. He and his EDM specialist Jean-Pierre Hornn confirm that the equipment and quality of the current generation have been improved yet again over those of its forerunners. 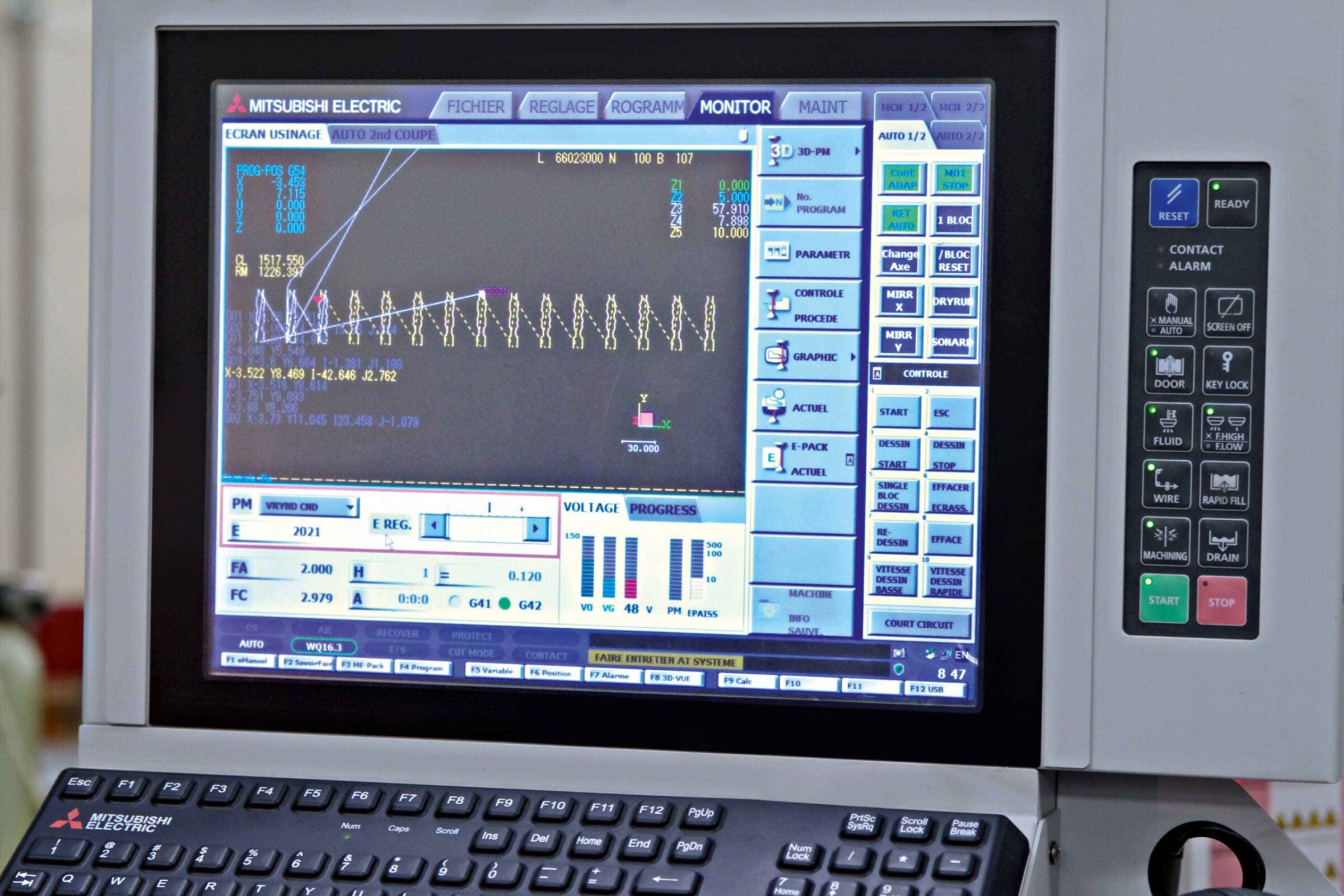 Even less skilled staff can intuitively operate the ADVANCE PLUS CNC control of the MV2400R wire-cutting machine.

Productive and efficient thanks to high availability

Automatic threading in Hornn’s view is a thoroughly mature technology. It works absolutely reliably and ensures the continuous operation of the MV2400R during unsupervised nightshifts and over the weekend. “When I clamp a plate in the evening from which several components are to be cut, I can count on all the workpieces being completed by the next morning,” says Hornn. And this helps the jobber to meet his delivery deadlines. At the same time, he can make extremely productive use of inexpensive unmanned shifts. The reliability of the MV2400R goes a long way towards keeping the company competitive on the international level.

With the MV2400R we are ideally equipped for all coming machining tasks.

Sustained high productivity is also aided by the machine’s minimal maintenance needs. The dielectric is moved much less, and the controllable generator optimises the size of the particles eroded during cutting. In doing so, it takes account not only of the material being cut, but also of different process parameters. This means that the filters remain fully functional for very long periods even during the machining of titanium. As Hornn reports, the MV2400R only needs about a fifth of the filter cartridges used on the already highly efficient machines of the FA and FX series. The much longer maintenance intervals firstly reduce the downtime needed for filter change. This improves the machine’s availability and raises productivity. In addition, minimised filter consumption also of course reduces recurrent operating costs considerably. “The MV2400R has thus become the ‘piggybank’ in production,” Lorentz adds. After over a year in service, the jobshop in Esbly has found that the productivity of an MV2400R is one and a half times to twice that of its predecessor generation. The MV series is by far the most mature. 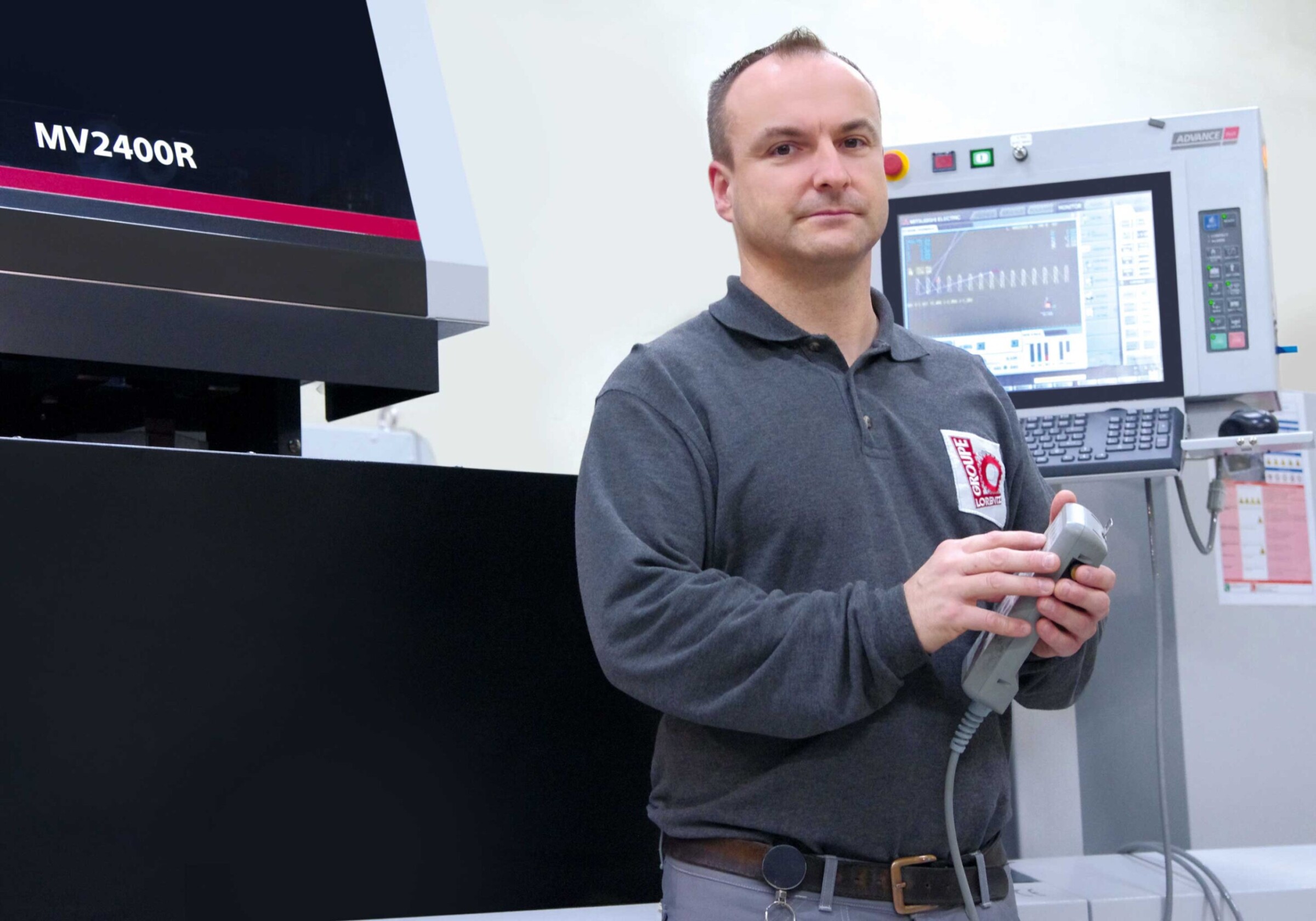 “The MV2400R is so comfortable to program, operate and control that it’s almost like being on holiday for the operator,” says Jean-Pierre Hornn, EDM specialist at the Lorentz jobshop in Esbly.

There’s another important feature responsible for the high availability of the MV2400R wire-cutting machine. Lorentz explains: “When our specialist Jean-Pierre Hornn is on well-earned holiday leave or otherwise un­available, production of course has to continue.” Thanks to the extra simple and easy-to-understand operation of the ADVANCE PLUS CNC control, this has never been a problem. Even less skilled employees who aren’t entrusted with the machining technology of wire EDM on a daily basis are capable of operating the MV2400R. Managing Director Lorentz, who with a smile claims to be more of a layman when it comes to the technical niceties, is himself able to load and start machining programs and hence successfully cut the currently required components, as the CNC control can be intuitively operated, guiding the operator with graphic support through the required dialogues. “With its comfortable operation and programming, the MV2400R fully meets the needs of a contract manufacturer for maximum flexibility,” Lorentz confirms. Machining programs are usually produced at a MasterCAM CAD/CAM workstation and transferred to the wire-cutting machine. Simple workpiece geometries are also programmed by Hornn at the machine’s CNC control in the workshop. 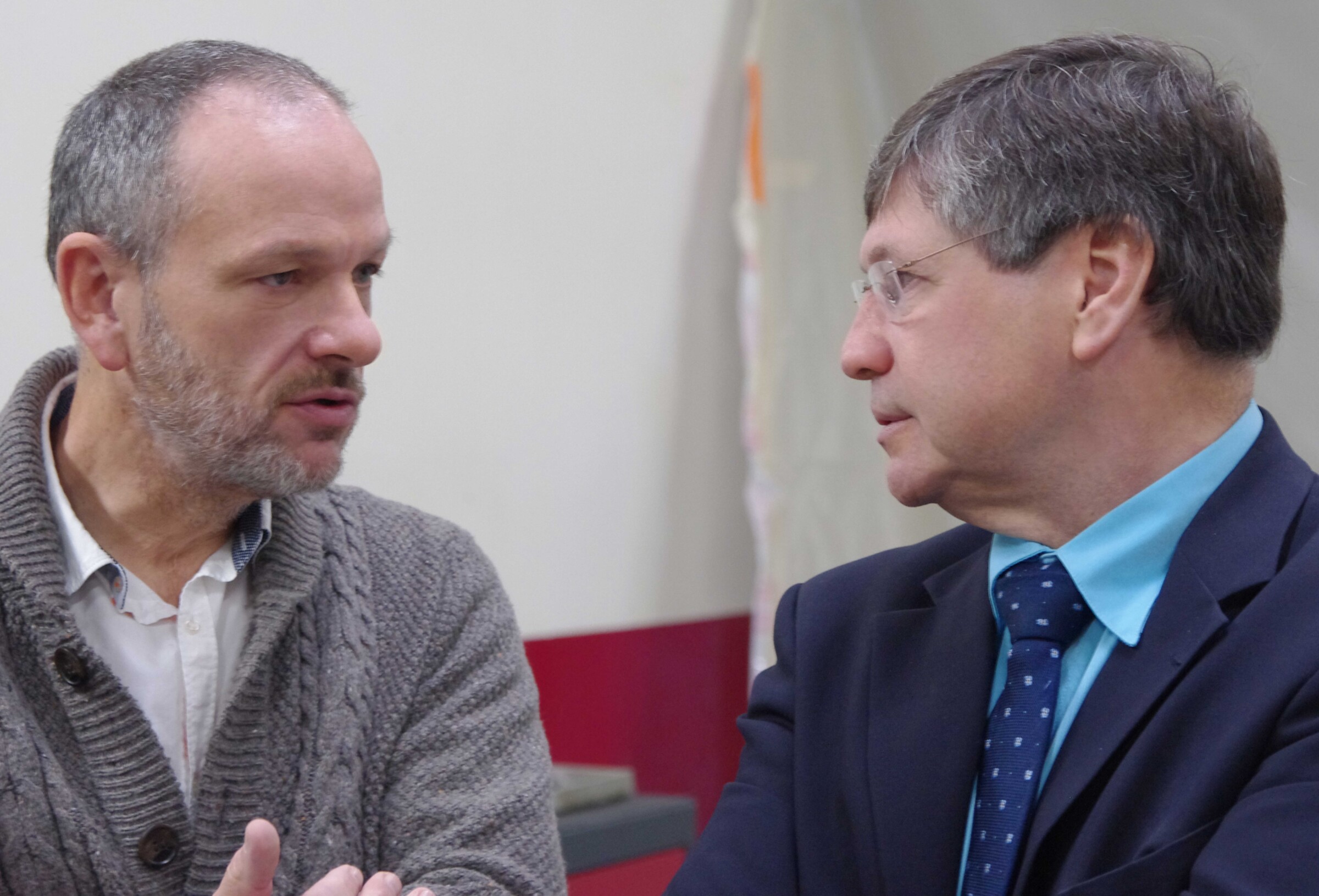 Lorentz sees his business’s recipe for success not only in being able to find intelligent solutions for complex machining tasks, for the commercial side of the business also has to be regularly optimised. This also includes, in Lorentz’s opinion, streamlining organisational structures. This is why he has centralised the company’s internal IT, for example. General expenses can also be additionally curbed to a large extent with a number of simple but extremely effective measures. For example, Lorentz has now equipped all the lighting in his office and workshops with LEDs. As he reports, this certainly has its price, but pays for itself quickly as the company will be consuming much less electricity from now on. “As a component supplier, we are under constantly growing pressure to cut costs. Energy saving is one of the best ways of doing this. It is a contribution to sustainability and resource conservation,” says Lorentz. And this also applies to his production machines – and the wire EDM is no exception. He explicitly mentions the characteristics of the MV2400R whose drive and generator technology is geared to minimal energy consumption. Its high productivity due to high cutting speeds in conjunction with optimised process parameters ensures minimal energy consumption per finished workpiece. Lorentz sums up: “With the MV2400R we are ideally equipped for all coming machining tasks. This means we can view the future with confidence, for the best is yet to come.”

What is the purpose of your company?
Efficient contract machining of complex cubic workpieces made of metal.
How did you earn your first money?
I worked in my father’s business and then took over management.
What’s your source of motivation?
The longing for the future and the will to successfully develop my company in the face of difficult situations.
What do you do now differently from five years ago?
We work every day on streamlining our processes and reducing costs.
Where do you see your company in five years’ time?
We shall significantly increase our export share from its current 15 or so per cent.
What was your biggest business success?
The best is yet to come.
What’s your favourite way to relax?
I enjoy being out in the country and am a passionate golfer.
If you were asked what your company does by a friend with no technical knowledge, how would you explain it?
We get metal into the desired shape.
How do you practise energy efficiency on a daily basis?
Energy efficiency is of great importance to me and my business. We constantly examine all ways of reducing energy consumption and hence costs at work. This applies, on the one hand, to installations and the equipment of buildings and machines and, on the other, to work processes and technologies. 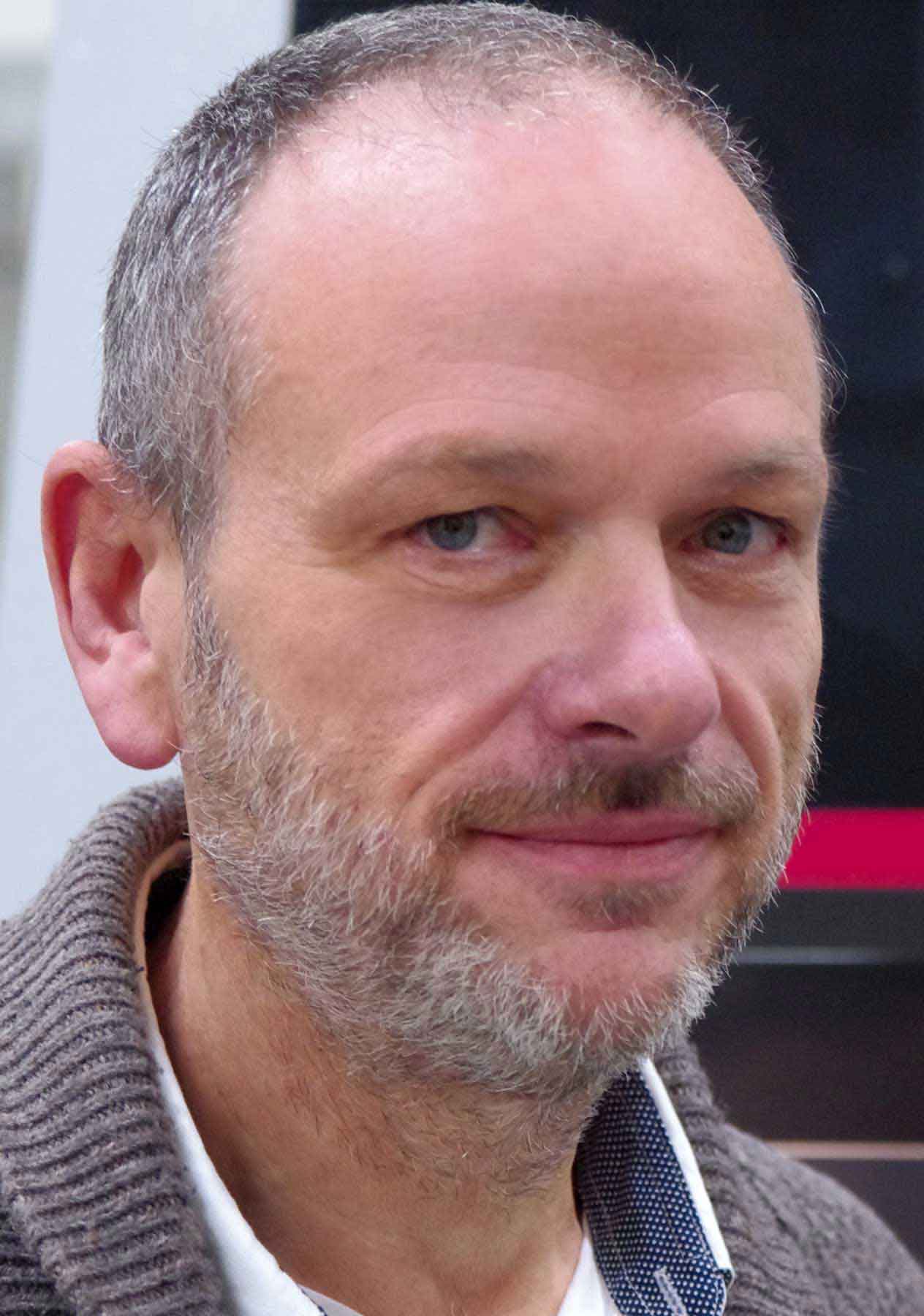