Japan’s traditional culture is represented above all by kabuki theatre with its rich costumes, the samurai and the geisha. Anyone who travels to the Land of the Rising Sun shouldn’t therefore pass up the opportunity to visit smaller towns, far removed from the modern world of anime and cosplay in Tokyo. In Kyoto, for example, the hallowed tradition of the female entertainer is still appreciated and alive. 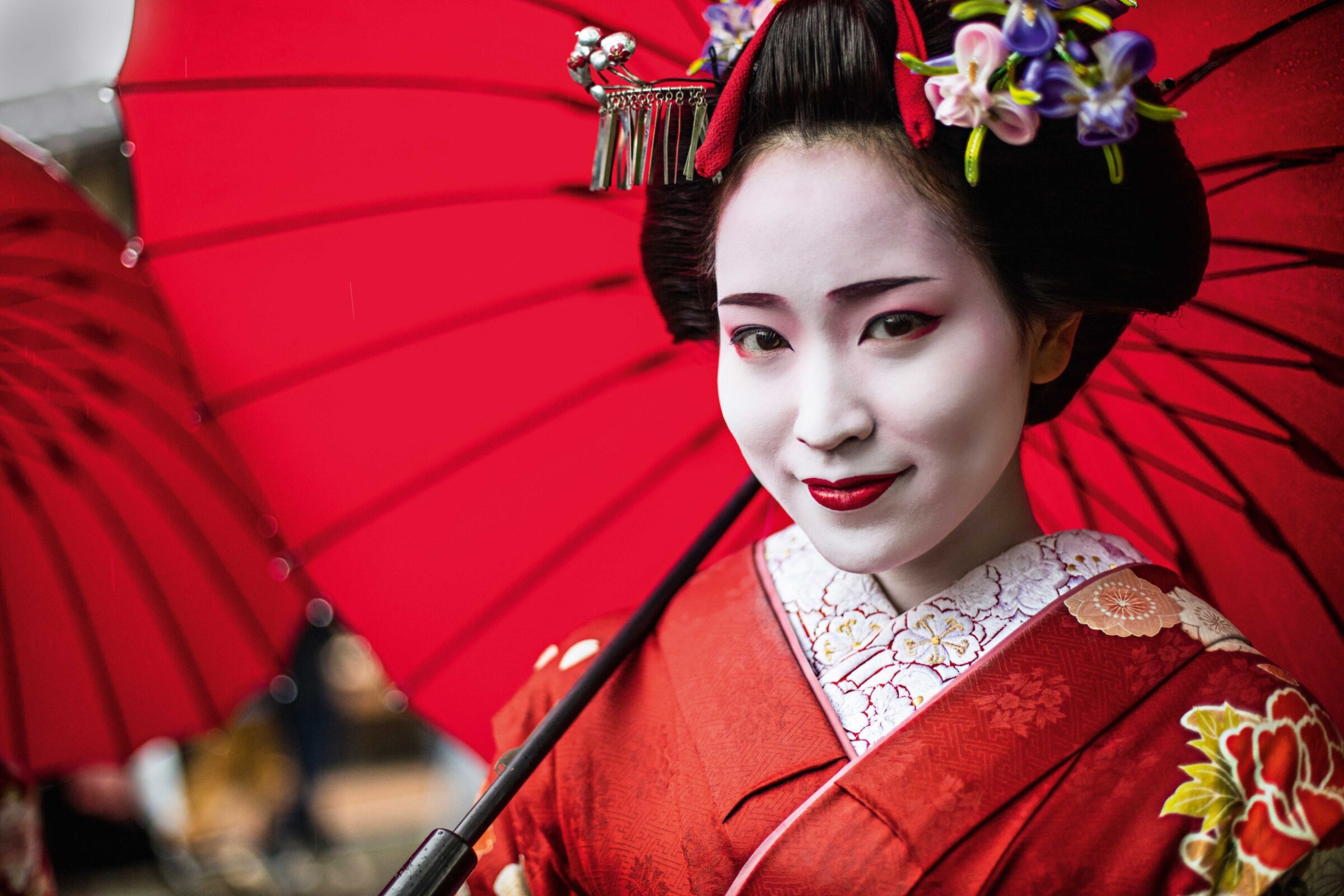 Japan’s traditional culture is represented above all by kabuki theatre with its rich costumes, the samurai and the geisha. Anyone who travels to the Land of the Rising Sun shouldn’t therefore pass up the opportunity to visit smaller towns, far removed from the modern world of anime and cosplay in Tokyo. In Kyoto, for example, the hallowed tradition of the female entertainer is still appreciated and alive. This is where you can also test Western conceptions of the geisha as a lady of pleasure – a definition that does not do justice to such women, particularly today.

So what is the geisha really?

According to the superficial interpretation in the West, the geisha is usually regarded as the Japanese equivalent of the prostitute. Such a conception, however, is far removed from the reality of these women. Literally translated, “geisha” means “person of the arts”. This term clearly indicates that the female entertainer possesses skills that have little to do with sexual services. Geisha culture has its origins in the 17th and 18th centuries when it was in vogue to hire convivial women for an amusing evening. What are probably the best-known geishas come from the Meiji period, the period in which Japan underwent renewal under the imperial dynasty of the same name. 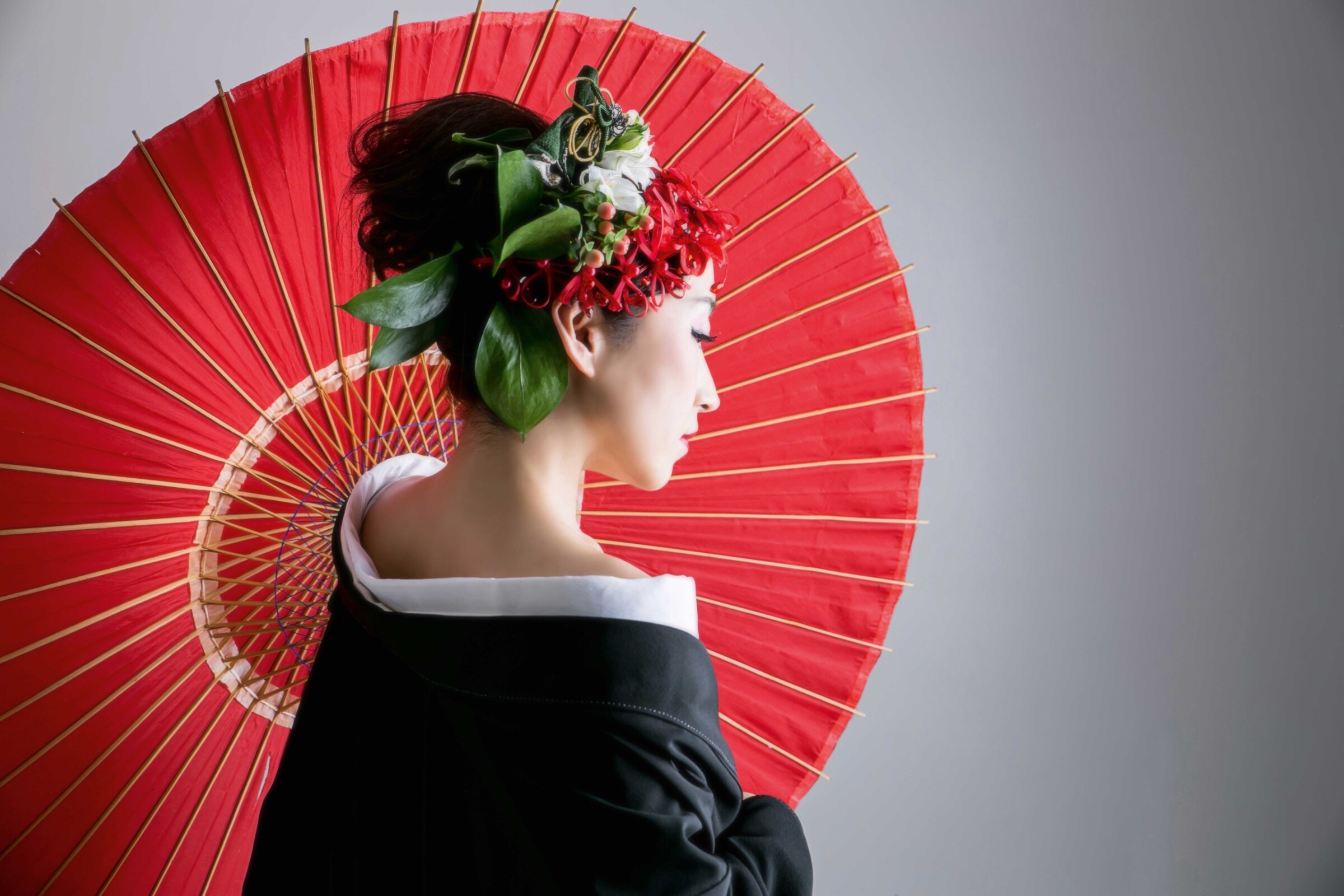 The hallowed tradition of the female entertainer.

A geisha has to master a number of arts. One of her most important tasks is to serve tea, for which she should, among other things, be aware of the distinctive features of and subtle differences between the various matcha teas. She also places other beverages and foods on the table. This is how she ensures the bodily well-being of the customer, while also keeping the conversation going, making intelligent comments and displaying discussion skills. She should also be able to sing and play traditional Japanese instruments like the shamisen. This lute-like instrument is a classic feature of a private evening with a geisha, although it is also used increasingly in connection with larger shows, e.g. in Kyoto’s traditional Gion quarter. Most female entertainers are also capable of playing the 13-string koto zither and thus charm their customers.

In addition to musical instruments, there are a number of accessories typical of the geisha. The most obvious is of course her clothing, by which she is immediately identified. Each geisha wears a richly ornamented kimono with an “obi”, a heavy, wide belt that holds the silken robe together. The types and forms of the belt can be very different and also differ according to region and occasion. Most geishas choose for themselves the formal version. With its very festive appearance and a huge width of 68 cm, the “maru obi”, for example, is a typical item of the geisha’s clothing. This obi also symbolises the historic fashion of the Meiji period and, with its enormous weight, is a real challenge for the wearer. These days, the Nagoya obi is very popular with geishas – this belt is only half as wide as the maru and is very widespread particularly in modern Tokyo. 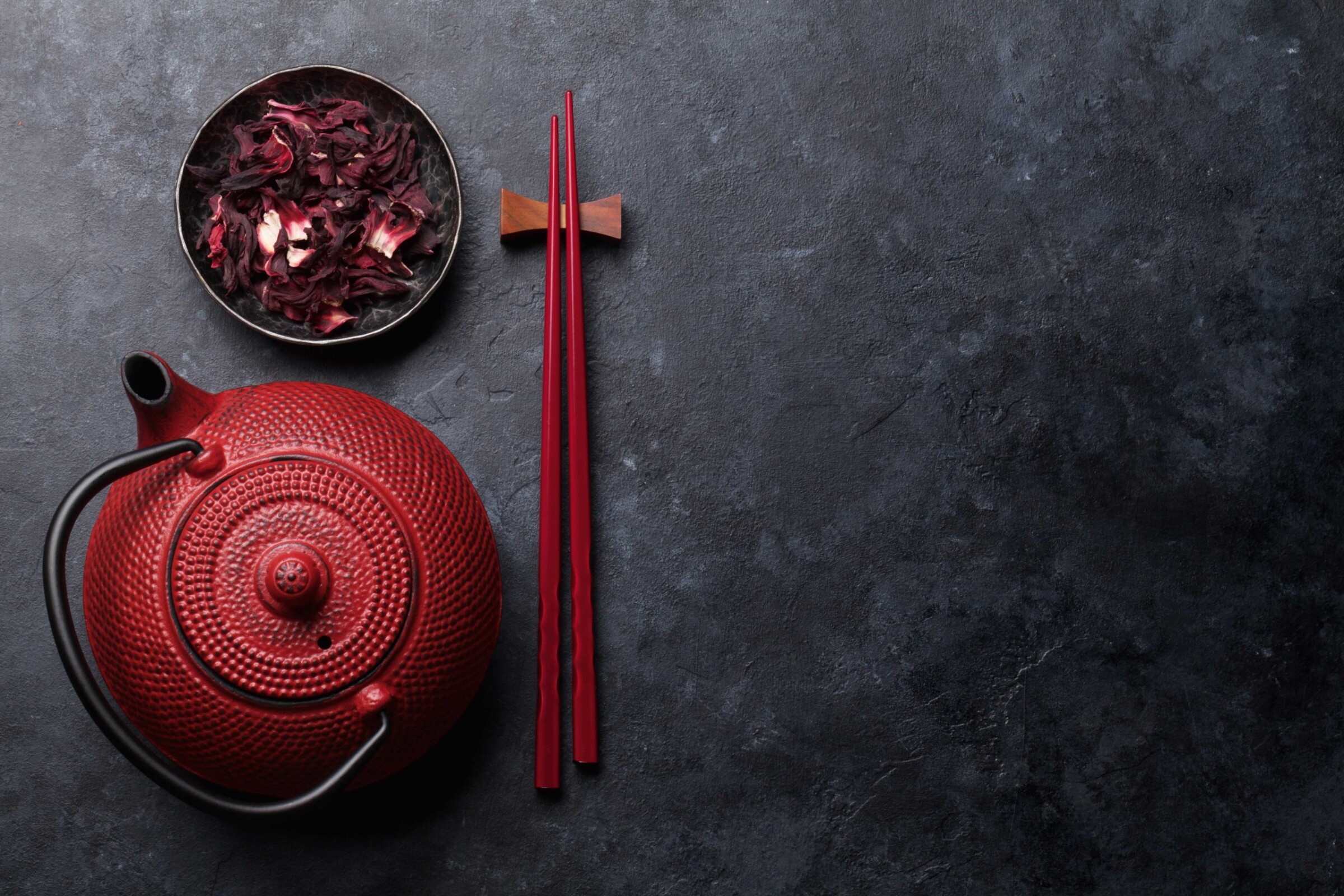 Professionals in the art of entertainment.

On their feet, the geisha wears the narrow “geta” sandals made of wood, slipping her toes into a thong much like that of a flip-flop. Very conspicuous are the wooden blocks on the soles that, in their modern version, can be up to 10 cm high. The more experienced the geisha, the higher the shoes she usually wears. Female entertainers still in training, for example, usually choose the “pokkuri geta”. In Kyoto, these shoes made of chestnut or fir are also known as “okobo”.

Her hair is either artistically pinned up or replaced with a wig. The hair is usually held together with elegant sticks. Brooches, pearl necklaces and blossoms are also attached. From the hair ornamentation known as “kanzashi” one can tell how advanced the geisha is in her training. Each year the material changes from lacquered wood to tortoiseshell, silk, silver and gold. Special kanzashi is used on certain festive occasions like the cherry blossom season or the New Year. 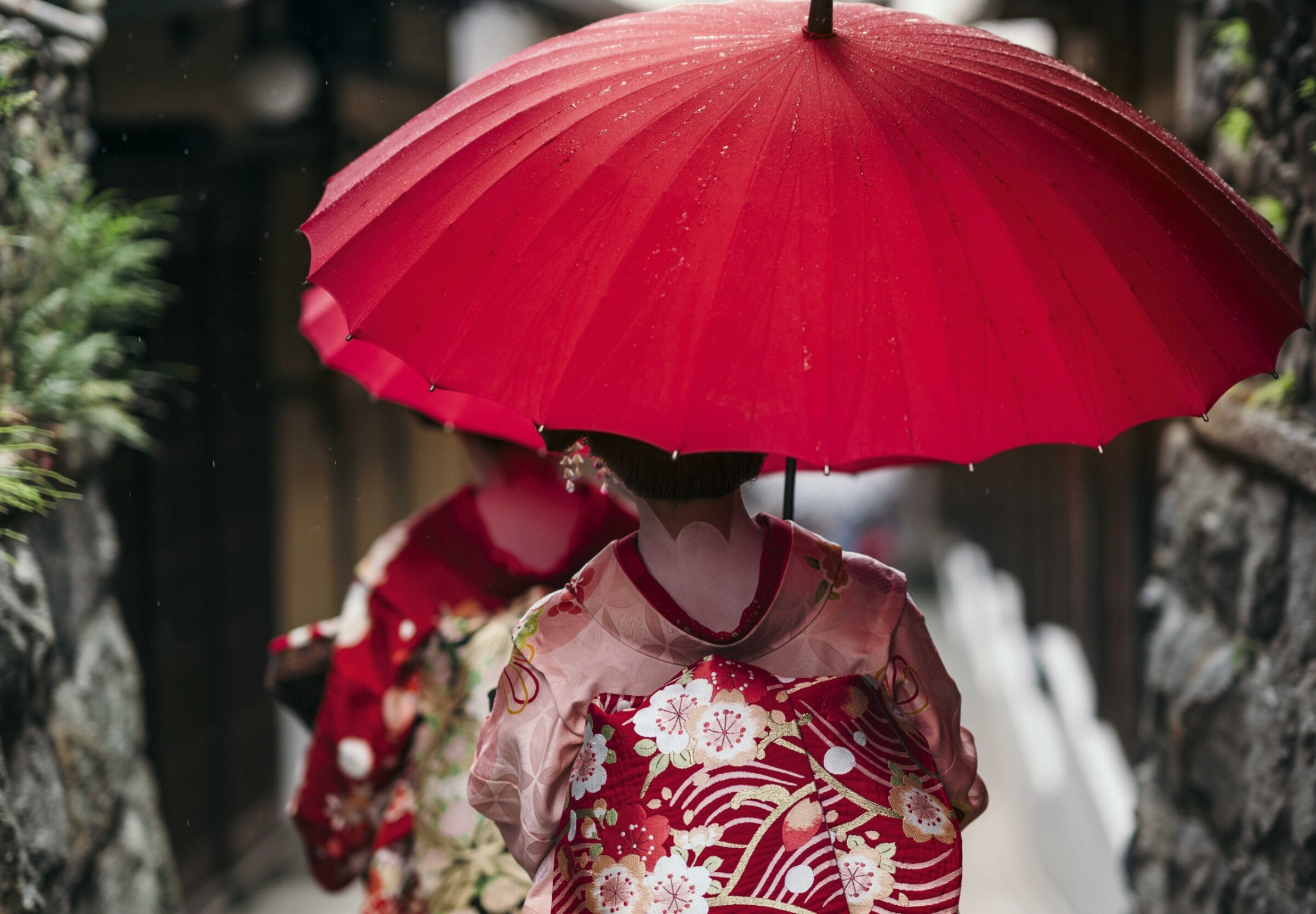 The face of the geisha is creamed with a thick, white paste known as “oshiroi”. This tradition goes back to the time when there was no electric lighting and women wanted to be clearly visible in candlelight. In addition, the cream looks like a kind of mask that completes the overall transformation. As soon as the geisha has made up her face, she identifies fully with her role. The bright red lipstick contrasts sharply with the white paste.

It was the geisha of the past that also served more as a prostitute. In the Edo period from circa 1603 to 1868, there was no clear division between entertainment and sexual services. Although by decree geishas could not advertise as prostitutes or show too much femininity, conversation and song often culminated in sexual acts. Eroticism has since been largely banished from the geisha’s profession. Anyone who hires a geisha today is looking for conversation, dance and song. In many tea houses women are employed to enchant holidaymakers. 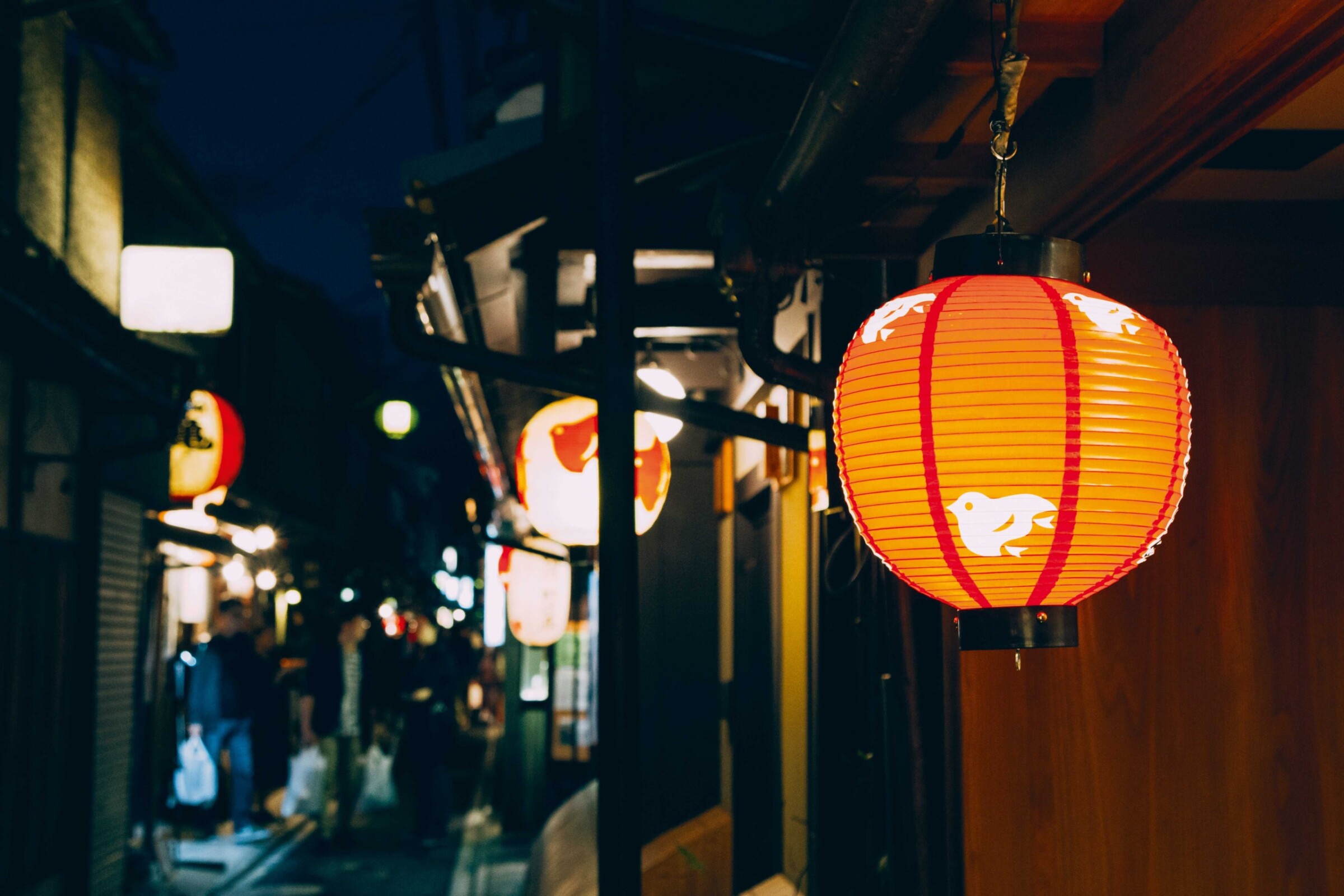 The Gion district in Kyoto at night

The geisha culture is still very active today in Kyoto, the old imperial capital. If you stroll through the Gion district, you’ll see many of the women walking the narrow streets in the evening hours. The Hanamikoji Boulevard is a hotspot for geishas. The women here are often referred to as “geiko” in the local dialect. The best place to gain an impression of this unique tradition is one of the tea houses, e.g. “machiya” or “ochaya”. After a public performance, it is possible to withdraw into a separate room to have oneself entertained by the geisha.