The rapid response force for prototypes 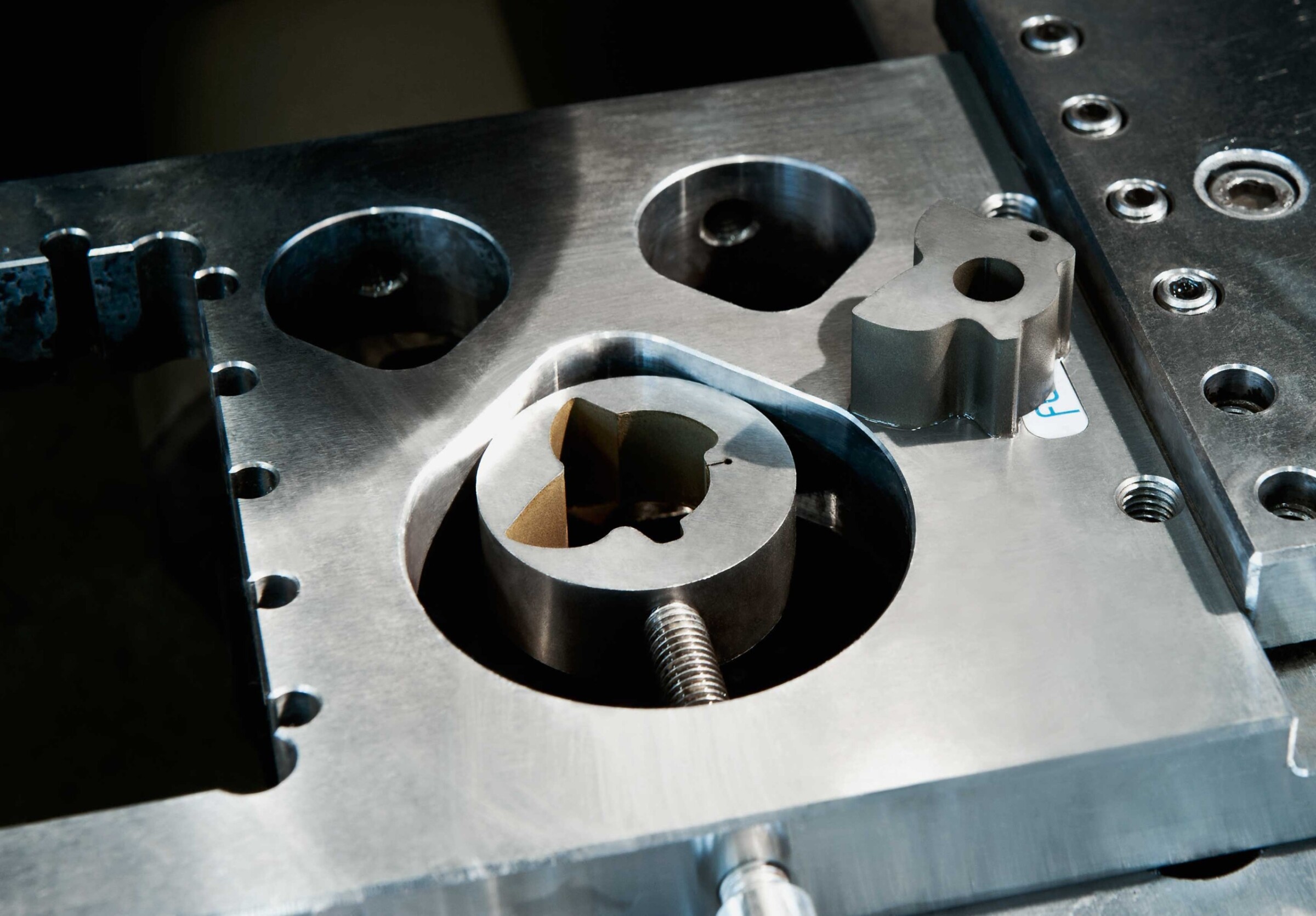 The rapid response force for prototypes

For Erodiertechnik Naumann GmbH, wire EDM is a still young but all the more successful line of business – thanks in part to Mitsubishi Electric. Erodiertechnik Naumann GmbH evolved in 2007 out of Erodiertechnik Mersetzky GmbH founded in Elchingen in 1988, where Oliver Naumann had been in charge since 2006. As the new company owner, he has continued the existing business policy by offering customers in toolmaking, machine manufacture and aerospace a broad spectrum of services. Along with wire-cut and sinker EDM, this range of activities has also included water jet cutting since 2008. In terms of hardware, Naumann relies on advanced EDM technology from Mitsubishi Electric, as demonstrated recently by the purchase of a BA8.

One-offs for specific customers make up a large portion of the product range handled by Ero­diertechnik Naumann GmbH.

“As a jobshop, we earn our livelihood by being able to respond flexibly and at short notice to customer requests.” Oliver Naumann, owner and managing director of Erodiertechnik Naumann GmbH, has made his mark not least as a result of this realistic assessment of the much-embattled EDM jobbing market. On top of this, there are his many years of working for the company and the experience of his eight employees. “Longstanding customers therefore stayed true to us even after the change of name.”

When it comes to attracting new customers, Naumann can also point to major success – this being due to the service provider’s ability to respond­ quickly. “If necessary, we act like a rapid response force that rushes out to prevent a crisis,” Oliver Naumann explains. This has brought him a number of new customers and follow-up jobs. “Anyone who’s satisfied with our work is happy to entrust further components to us.”

Our plan is to buy two more machines in the next three to five years.

The components that Naumann machines are as varied as his customers. “We mainly deal with one-offs and do a lot of work for makers of prototypes,” says Oliver Naumann, describing his highly customer-specific offer. A series comprises a maximum of 100 parts. However, what the parts all have in common is their high standard of quality, as the skilled mouldmaker elucidates: “The degree of complexity can be extremely high and yet we achieve precision in the µm range with surface qualities as good as RA 0.2.”

Erodiertechnik Naumann GmbH satisfies its as­pi­ra­tions in terms of quality and precision both with the necessary expertise and with the very latest machine technology. Two wire EDM machines from Mitsubishi Electric – both FA10-S Advance machines – along with an EA12-V sinker EDM machine have been in operation here since 2008. The firm’s positive experience with these three machines culminated in the most recent purchas­ing­ decision, says Oliver Naumann: “The dependability of the Mitsubishi Electric machines is outstanding across the board, not only be­cause we regularly service all ­the machines. Our operators were quick to acclimatise themselves to them.” 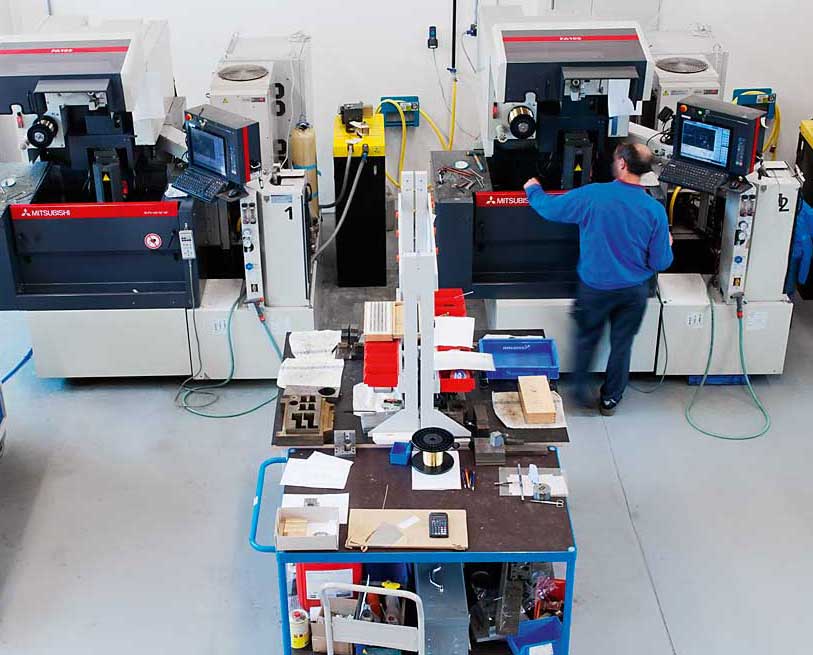 Erodiertechnik Naumann GmbH has been working with the two FA10-S Advance machines from Mitsubishi Electric since 2008.

The fourth Mitsubishi Electric machine in Naumann’s machine park is a BA8 and is now fully ­integrated in the production pro­cess since its installation a few weeks back. Although its control without a touchscreen is simpler than that of the FA10-S Advance, Oliver Naumann does not consider this a drawback: “This hardly makes itself felt during operation as the machine technology is practically identical.” It’s the results of EDM that count along with the machine’s integration in the company’s workflow.

As far as Naumann’s expectations are concerned, the BA8’s equipment leaves nothing to be desired. A high-performance generator ensures that the machine works swiftly – Oliver Naumann quotes a 20 per cent increase in speed over older models – and at the same time guarantees reproducible precision. Over and above this, the automatic wire threader supports continuous workflow. “Like the two FA10-S Advances, we also run the BA8 in unmanned shifts in order to boost our productivity and flexibility.

The machines’ high rate of utilisation also resupposes a high level of process security, which Naumann ensures with the servicing mentioned above. However, even when help from the manufacturer is required, the solutions are straightforward and, more importantly, quick, Oliver Naumann has found. “Whether via the hotline or here on site, the Mitsubishi Electric technicians are competent and act fast enough to keep our downtime to a minimum.” He is equally appreciative of the ordering of spares and other materials via Mitsubishi Electric’s online shop, which boasts product availability with deliveries at short notice. 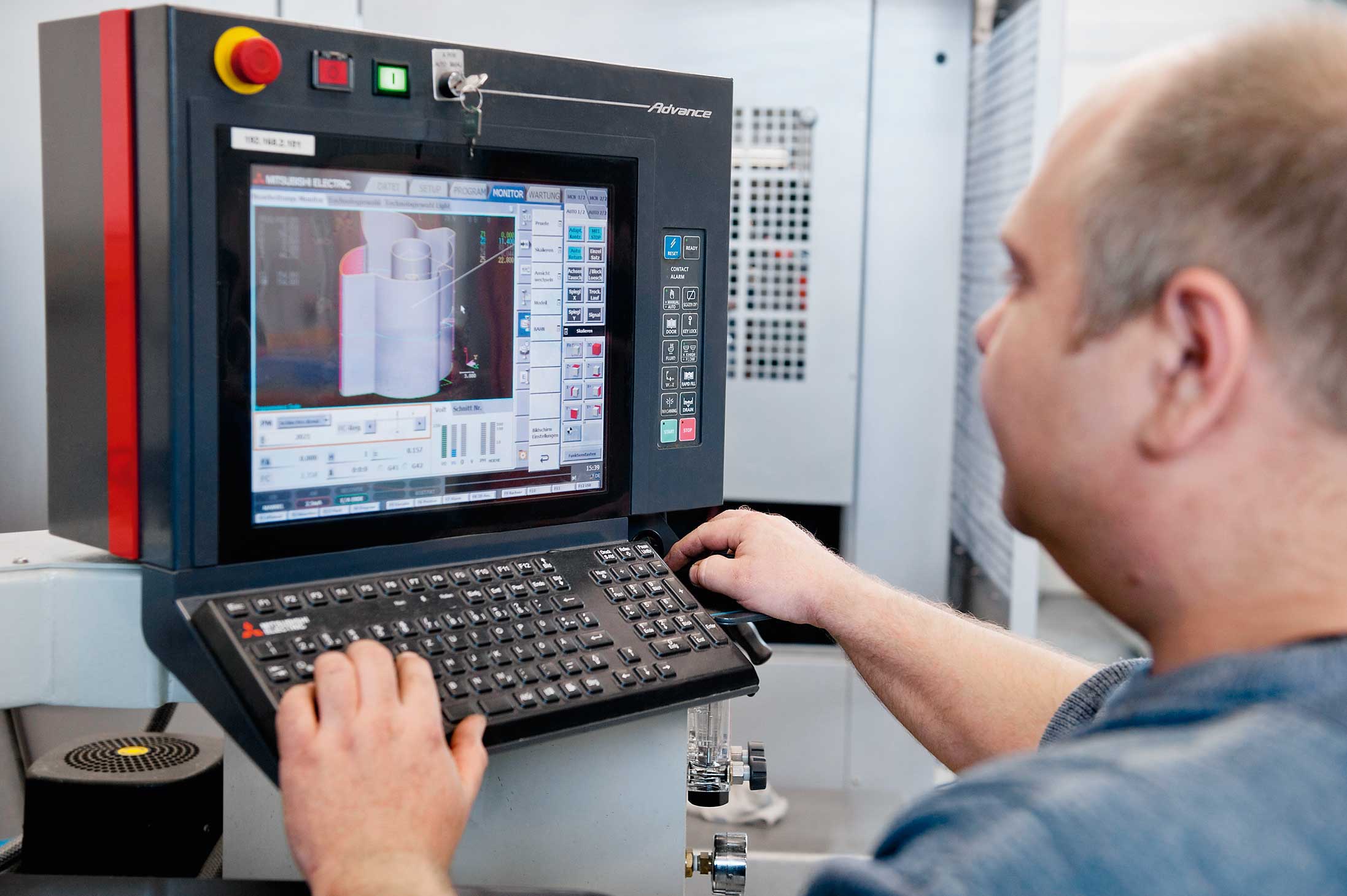 The controls from Mitsubishi Electric can be operated with ease and intuition.

Wire-cutting at Naumann has evolved into a core line of business in the last few years because the technology permits forms of machining that would be impossible or exorbitantly expensive with con­entional methods. The team therefore concentrates on services of precisely this kind. Oliver Naumann has deliberately decided against time-consuming development jobs: “Although we’ve certainly got the expertise for supporting customers in the engineering of components, we’d have to invest so much time that our flexibility would suffer.”

Oliver Naumann aims to stay committed to flexibility. With the current workforce, he’s got sufficient potential for further growth – and investment. “Our plan is to buy two more machines in the next three to five years so that we can serve the market with a broader range of activities.”

Please describe in a sentence what Erodiertechnik Naumann GmbH does!
Our core line of business is wire EDM.
How did you earn your first money?
In steel mouldmaking and later as a mouldmaker and master fine ­mechanic.
What motivates you?
Satisfied customers and a good job of work for the envisaged application.
What’s different about how you do things now, compared to five years ago?
Thanks to our larger workforce, we’ve become more flexible and delivery deadlines have become tighter.
Where do you see your company in five years?
We’d like to become more flexible by buying two more machines.
What was your biggest business success?
Growth and buying a shop and moving the business during the crisis in 2010.
What’s your favourite way to relax?
Walking the dog.
What attributes do you value most in other people?
Openness and honesty.
How would you briefly describe what you do to someone with no technical knowledge?
We burn metal with a fine wire. 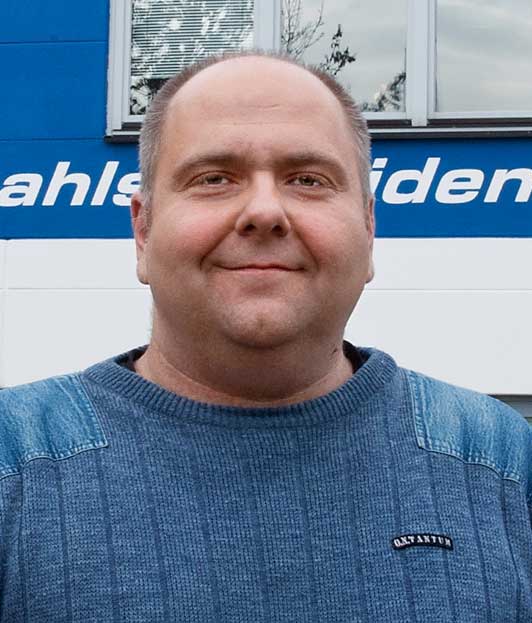