The Sauber C36-Ferrari. The anniversary car for the new era 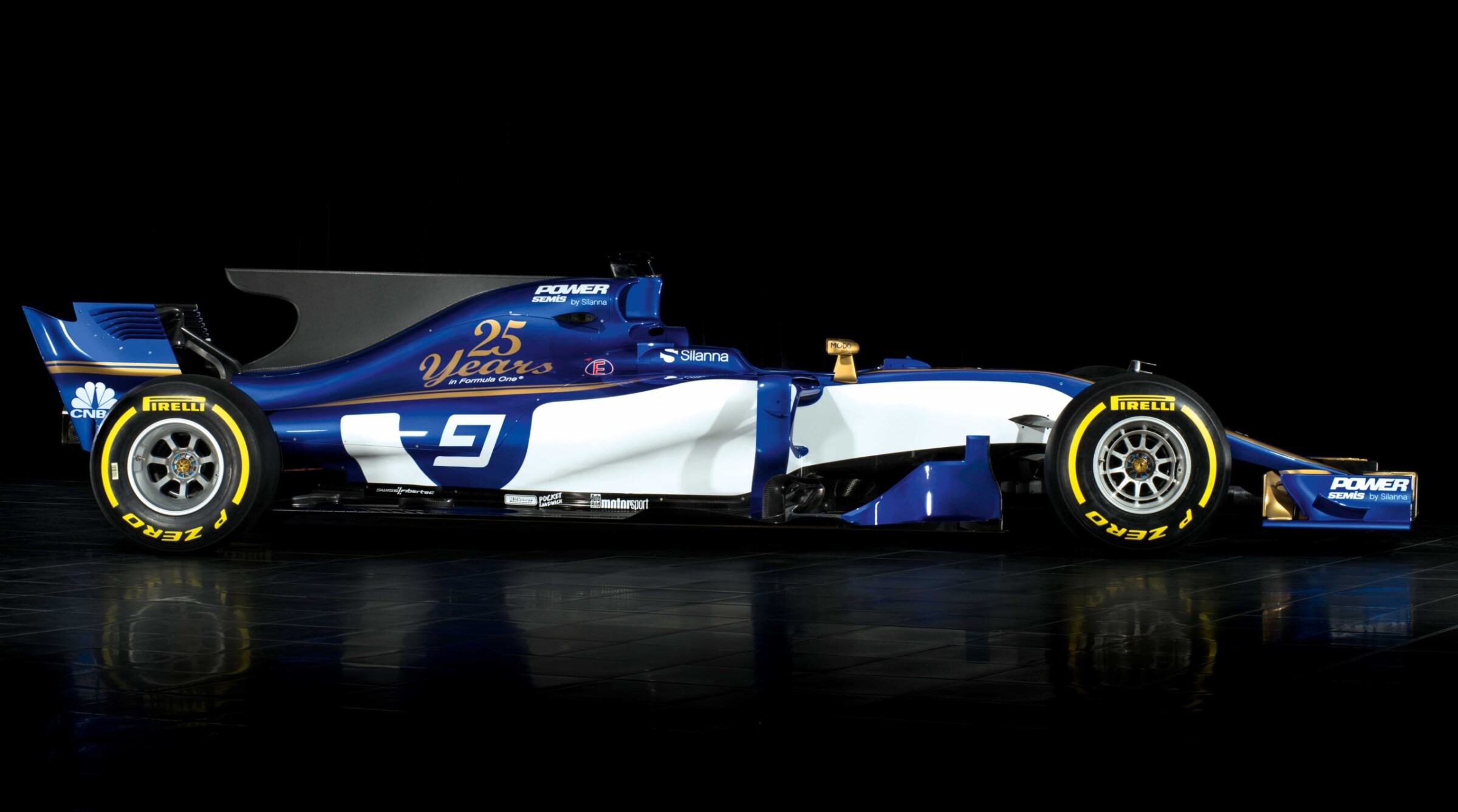 The anniversary car for the new era

The Sauber C36-Ferrari. The anniversary car for the new era.

Dawn of a new era in top-tier motor racing

In the 2017 FIA Formula One World Championship the Swiss team will again be competing with driver ­Marcus Ericsson (SE, 26) and new ­arrival Pascal Wehrlein (DE, 22). The official rollout of the new ­Sauber C36-Ferrari will take place on the occasion of the first winter tests at the Circuit de Catalunya near ­Barcelona from 27 February to 2 March.

Not only will Formula One be ­enteringa fresh era with its new technical regulations and rules, but also the Sauber F1 Team. With new ownership, the Sauber Group has the chance of a new beginning, and can establish ­itself and create a solid  ­basis  for a ­competitive and successful ­future. CEO and Team Principal ­Monisha ­Kaltenborn is looking ­forward to ­exciting times: “Together with ­Longbow ­Finance S. A., we have great opportunites to be competitive again and to return to ­previous successes in Formula One.
We want to position ourselves with a new approach, and we have already taken the first steps in order to build a solid foundation for the future.”

A solid foundation for the future

Despite the fact that Formula One and its teams will again ­enter new territory based on the new technical regulations and rules in 2017, the Sauber F1 Team’s ­expectations are straight to the point: “We clearly have to ­improve,” says Monisha ­Kaltenborn. “With the Sauber C36-Ferrari we have a solid basis as well as the resources to further develop the ­Sauber C36-Ferrari through the ­season. This will be important to establish in mid-field.” 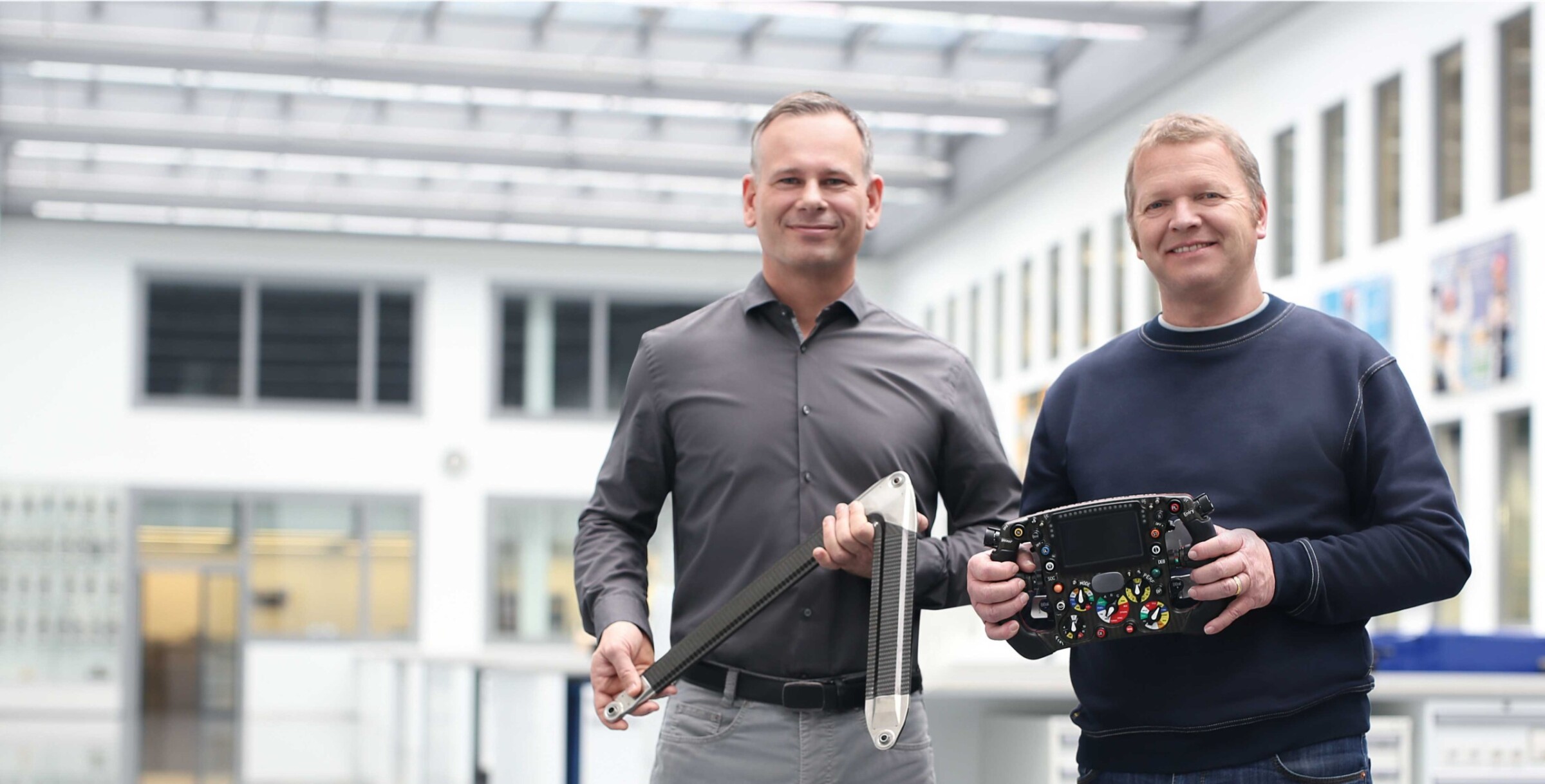 In Jörg Zander a new technical ­director arrived at the ­high-­tech ­factory in Hinwil in January 2017. The first thing he had to do was to get an overview of the ­technical prerequisites and to familiarise ­himself with both the new and the old conditions – which he soon managed to do because he felt comfortable from day one. Jörg Zander is a familiar face, returning to the Swiss team after having worked there from 2006 to 2007 as chief designer for the BMW Sauber F1 Team.

The ­German ­summarises the most ­conspicuous changes that define the ­Sauber C36-Ferrari due to the new regulations: “The cars are becoming wider again, from 1.80 to 2 metres, the tyres are 25 % wider, the front and rear wings are becoming wider as well, plus the diffuser is being enlarged. In total, this means more downforce, more grip and, as a result, faster lap times.” Consequently, work on the concept of the new car was focused on reducing the drag coefficient (due to the wider tyres) to a minimum as well as achieving a significant weight reduction, for instance by means of the new roll structure. ­ 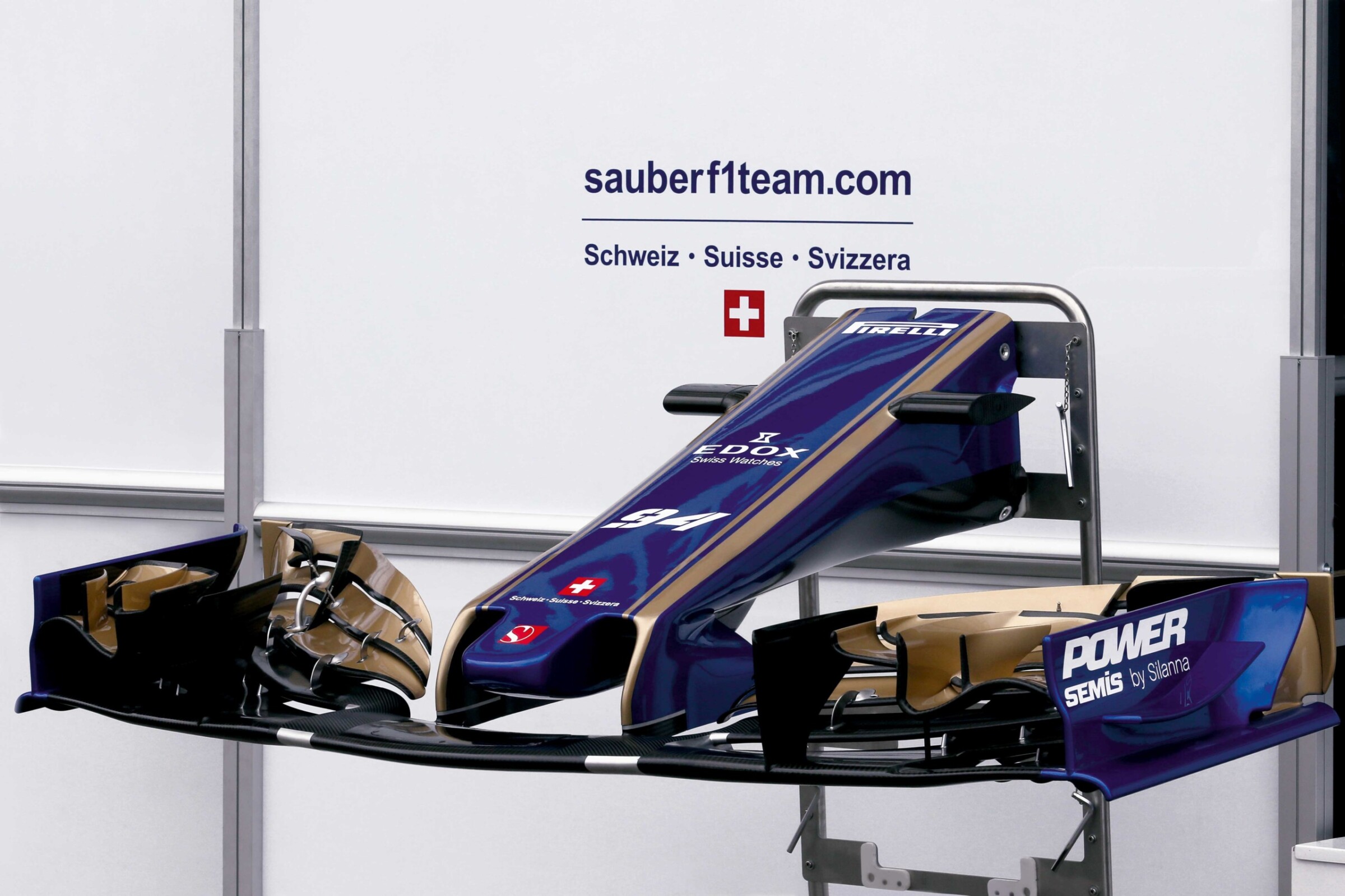 The conspicuous front wings of the new C36 Ferrari generate high downforce for better traction – the key to much smoother negotiation of fast and medium-fast bends.

In certain areas of lightweight ­design the team went to the limits. The aero concept includes the optimisation of the front and rear wings and the underfloor. The radiator, the sidepods and the ­bodywork were designed to be as slim as ­possible. Clear progress was also achieved in terms of additional downforce. The key here is to keep downforce, which is generated via driving, and remain stable in various track sections. Jörg Zander explains the changes in the development procedure in more precise terms: “We put greater emphasis on aerodynamic stability as opposed to maximising downforce.” 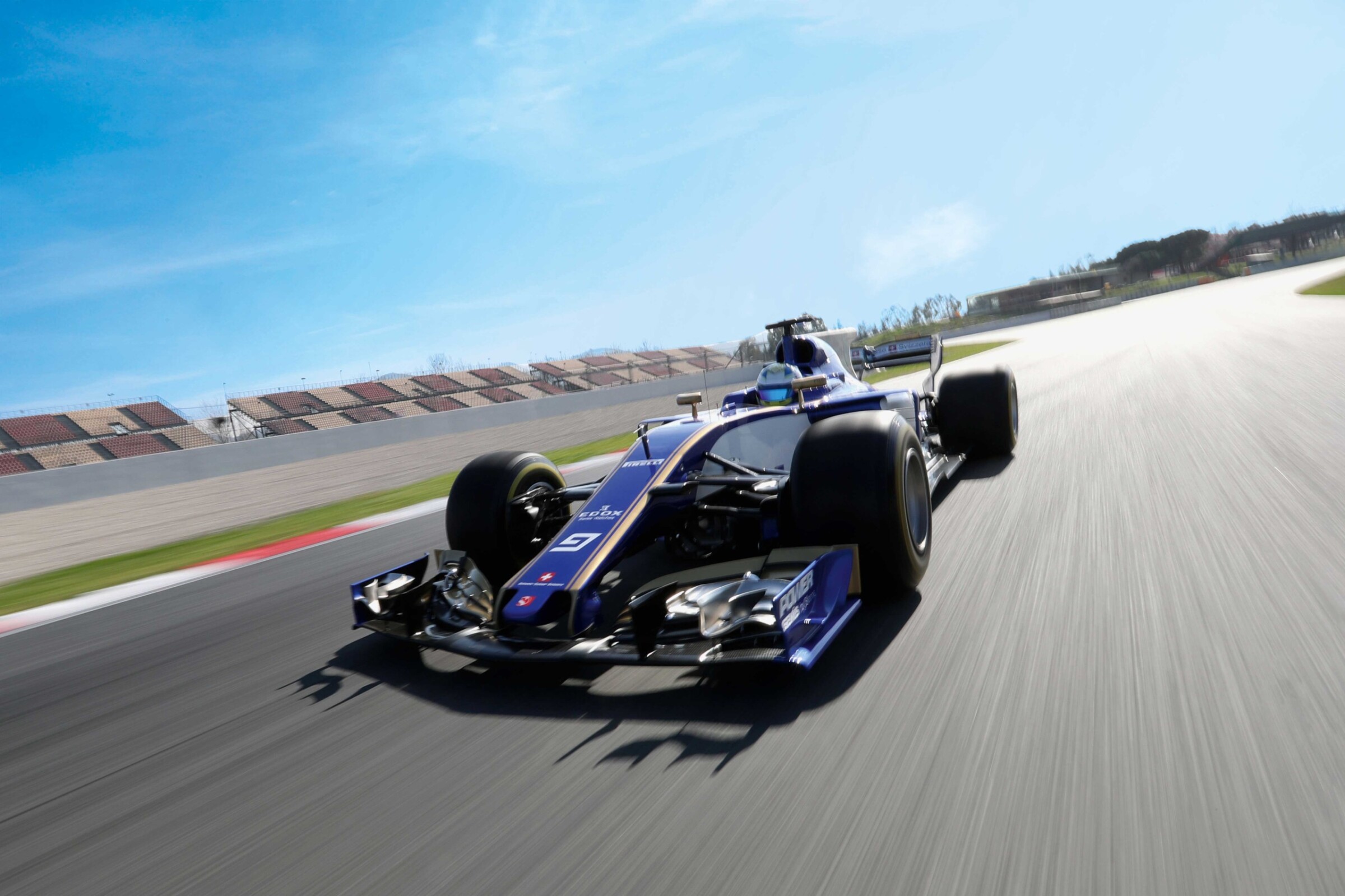 The new Sauber C36 Ferrari on the race circuit.

“Basically, big teams also have an advantage when it comes to major changes in the regulations,” says Jörg Zander, “but when the cards are reshuffled new opportunities always present ­themselves as well.”

The C36 Ferrari – redesigned from scratch

The Sauber C36-Ferrari is wider and lower, with wider tyres making the car look more muscular than last year’s model, the C35. ­Practically just by looking at it, one can tell the speed the new car has increased as a result of more downforce and shorter braking distances – measured against lap time not top speed – it is written all over its face. The width of the front tyres has  increased from 245 to 305 mm, that of the rear tyres from 325 to 405 mm.

Something that has not changed compared with 2016 is the fact that the wider tyres will be able to decide races as well when it comes to how they work and harmonise with the car’s setup and with respect to wear. “With the tyres one might be able to mask deficits and get development concepts to work better,” says Jörg Zander. The  Sauber C36-Ferrari is a car which, due to the new technical regulations, has been redesigned from scratch. There is not a single part that could be adopted from its C35 predecessor. In 2017, the Ferrari powertrain in the Abu Dhabi 2016 configuration will be used initially together with the C36. One of the changes this season is that only four of the six units of a powertrain can be changed without penalty. In the next few years the number will be ­further reduced, which is why the manufacturers are going to put greater emphasis on the durability than on the top speed of their units. Jörg Zander regards the ­2016-spec engine as “a tried and tested ­system with higher durability to begin with.” In addition, with respect to the design ­resources in ­planning the development of the C36, Jörg Zander says that “being able to get started early and defining the engine environment was an advantage because the team was ­familiar with the engine and the transmission as well as the ­cooling ­requirements the engine ­entailed.” 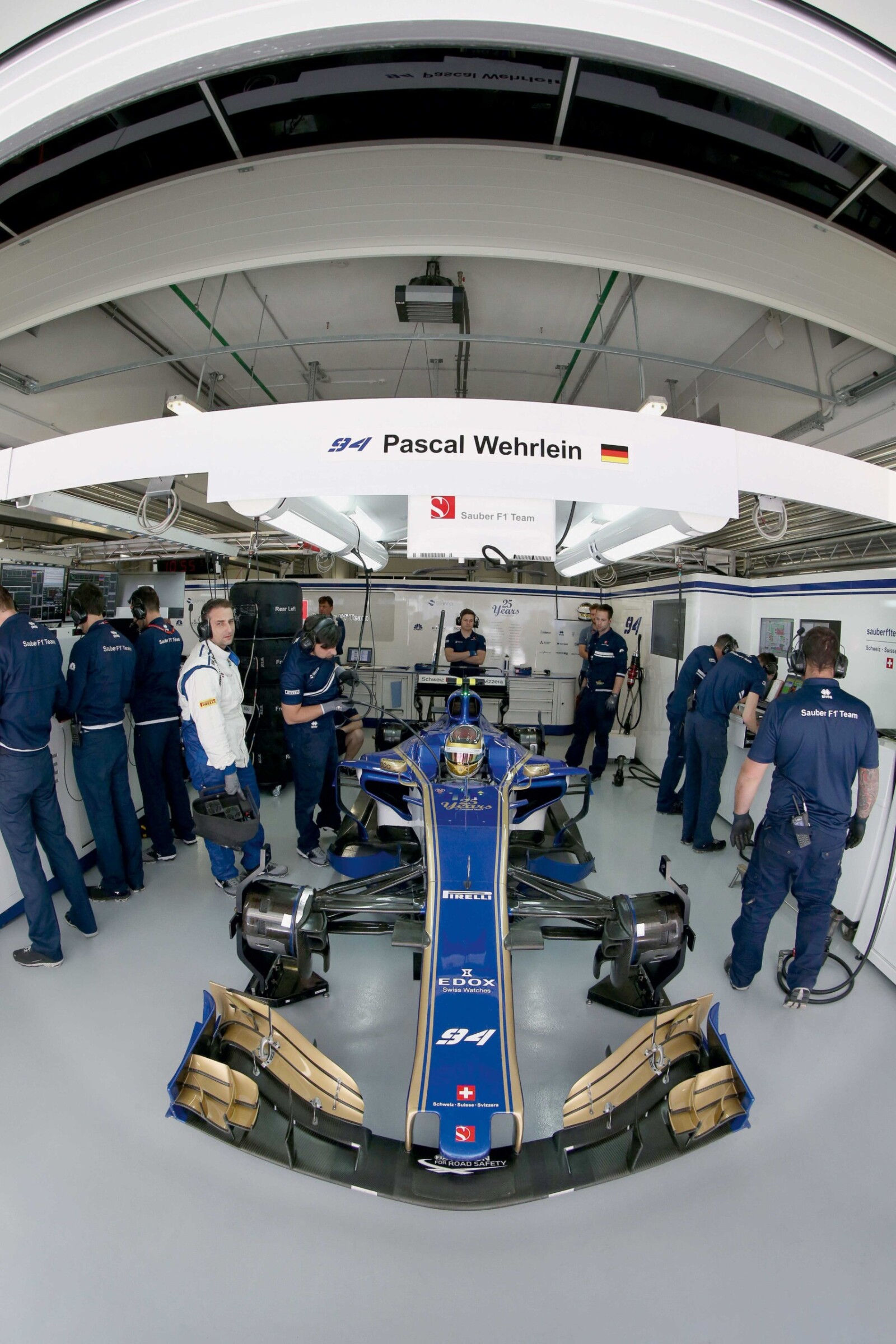 Team Principal Monisha Kaltenborn says: “I find it particularly valuable that this longstanding ­partnership has remained intact even through our difficult times. The ­Mitsubishi logo ­appears among other things on the transporters, press ­stationery and the pit garage walls.” “­After what is now twelve years as a partner to the ­Sauber F1 team, we are delighted to have the chance to ­intensify our cooperation still further for the future,” says ­Hans-Jürgen Pelzers, Sales Manager ­Mechatronics Machinery. “Mitsubishi Electric is a technological leader in all areas, so our Formula One involvement goes very well with this.”

Number of employees:
some 350