In the over twenty years’ history of Roman Weber GmbH, the company of the founder of the same name has evolved into Switzerland’s biggest wire EDM centre. With one-off production solutions, the wire eroders from Tobel succeed with what others consider impossible. The aspiration to superlative quality combined with cost-effective production remains unchanged.

In the over twenty years’ history of Roman Weber GmbH, the company of the founder of the same name has evolved into Switzerland’s biggest wire EDM centre. With one-off production solutions, the wire eroders from Tobel succeed with what others consider impossible. The aspiration to superlative quality combined with cost-effective production remains unchanged. Roman Weber therefore resorts consistently to innovative wire-cut EDM technology and invested in an FA20-S Advance in 2010.

Roman Weber is an EDM jobber with perfectionist tendencies. A claim confirmed by his customers and underscored by the sports car that he has built himself – one of the fastest.

“It’s the complicated parts that really make our work interesting. These are the challenges that we like to take on.” This is how Roman Weber, a toolmaker by trade, describes shortly and sweetly the approach pursued by his business established in 1988. Roman Weber GmbH is synonymous with out-of-the-ordinary solutions in wire erosion, because it never shies away even from complicated tasks. On the contrary: the specialists develop their own solutions in order to produce the parts not only to the demanded standard of quality, but also as efficiently as possible. “The customer says what he wants, and we find a solution,” Roman Weber puts it succinctly. 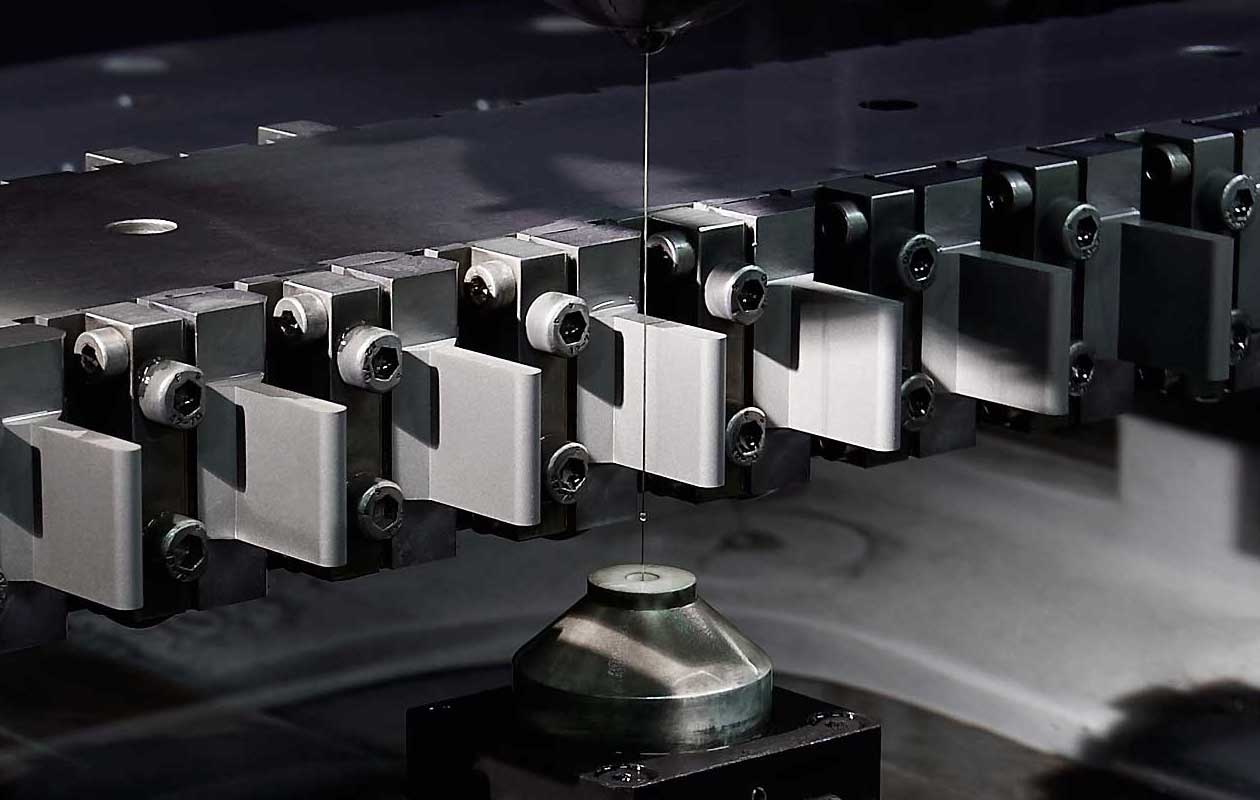 EDM jobshop with its own product

The most important target sectors of Roman Weber GmbH are medical technology with a share of about 50 per cent and automotive engineering at 25 per cent. With customized production solutions in wire EDM, Roman Weber has largely revolutionized the production of medical technology products. A special rotational/swivel axis, for instance, makes it possible to cost-effec­tive­ly machine parts with many different angles. Roman Weber has been making use of this technology for fifteen years: “We produce cutting blocks on a daily basis that are needed for knee operations. Without the rotational/swivel axis, production wouldn’t be anything like as efficient.” 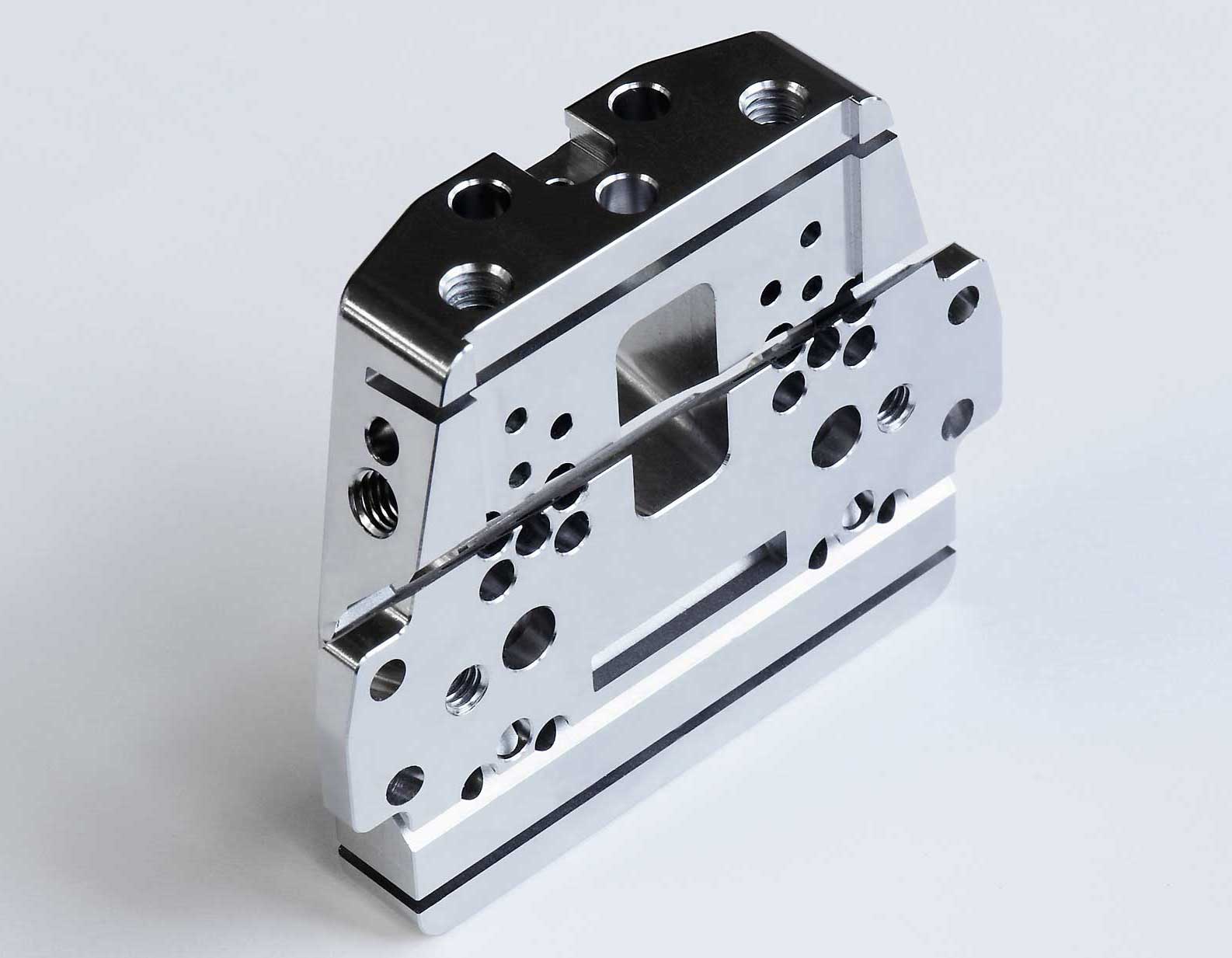 The cutting block for knee operations is produced in six sizes. Roman Weber realized the various cutting angles with a controlled simultaneous rotational/swivel axis that he developed himself

In another case, Roman Weber had to find a solution for wire-cutting around corners. The only possible alternative would have been to machine the part by sinker EDM – a much too elaborate and hence costly process. The result of the tinkering has remained unparalleled worldwide to the present day: deflection devices developed by Roman Weber guide the wire around the obstacle. 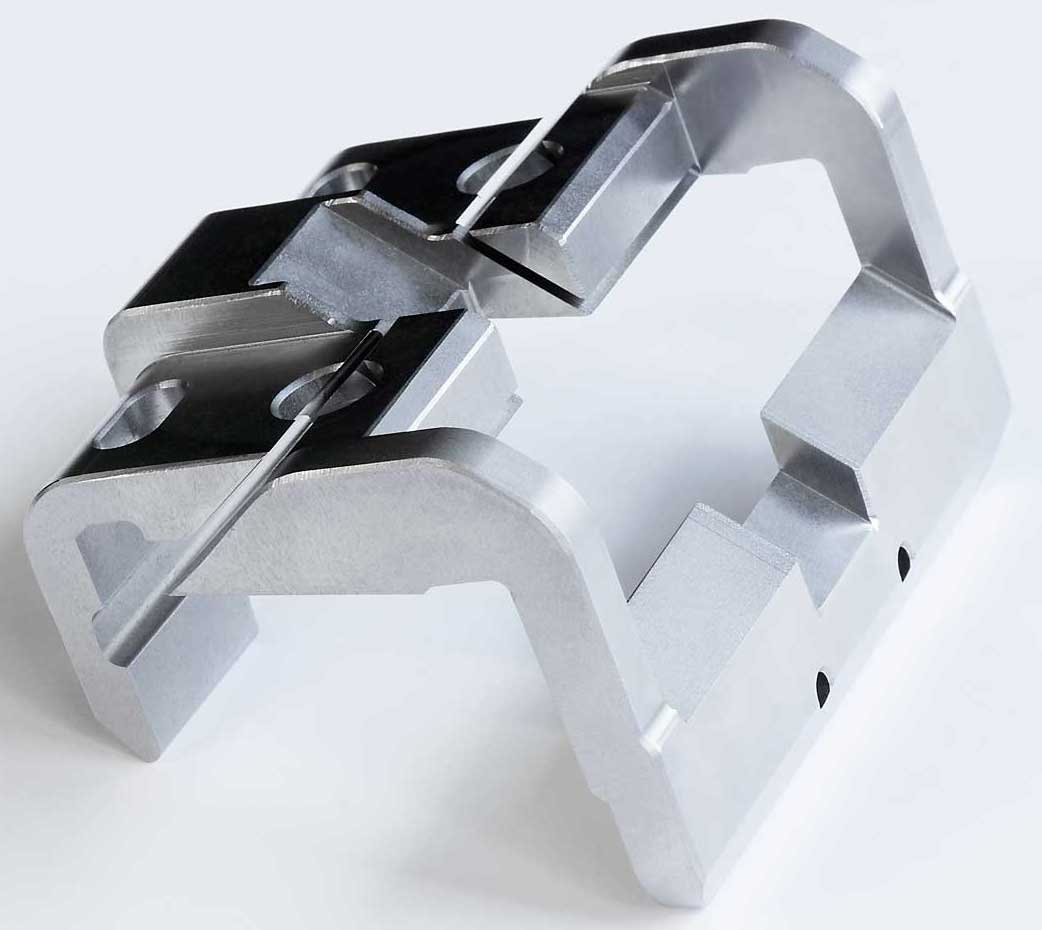 Every product machined by Roman Weber GmbH meets the highest quality standards – regardless of the complexity of the part in question.

By setting up his own business, Weber also laid the foundations for his very own product. 25 years ago, the company founder set himself the goal of building a sports car. With his perfectionist tendencies, it was also to be the perfect car. After years of development work, to which 21 Formula One race engineers contributed 100,000 man hours, Roman Weber unveiled his 900 hp vehicle in 2007, which is still one of the fastest sports cars registered for road use. “We built the car entirely ourselves, drawing on the full range of our metalworking skills,” Roman Weber recalls. FA20-S Advance – wire EDM machine for the toughest requirements Be it customer orders from the medical technology sector or components for the company’s own sports car – the wire eroders at Roman Weber GmbH put their faith in the production of their high-grade components on innovative wire EDM technology from Mitsubishi Electric. The machine park was extended in 2010 to include an FA20-S Advance in a bid to boost capacity and quality. “We were already amply familiar with a predecessor model of this machine,” says Roman Weber looking back. He celebrated one of his biggest entrepreneurial successes with the old FA20 – the production of the cutting blocks mentioned earlier. 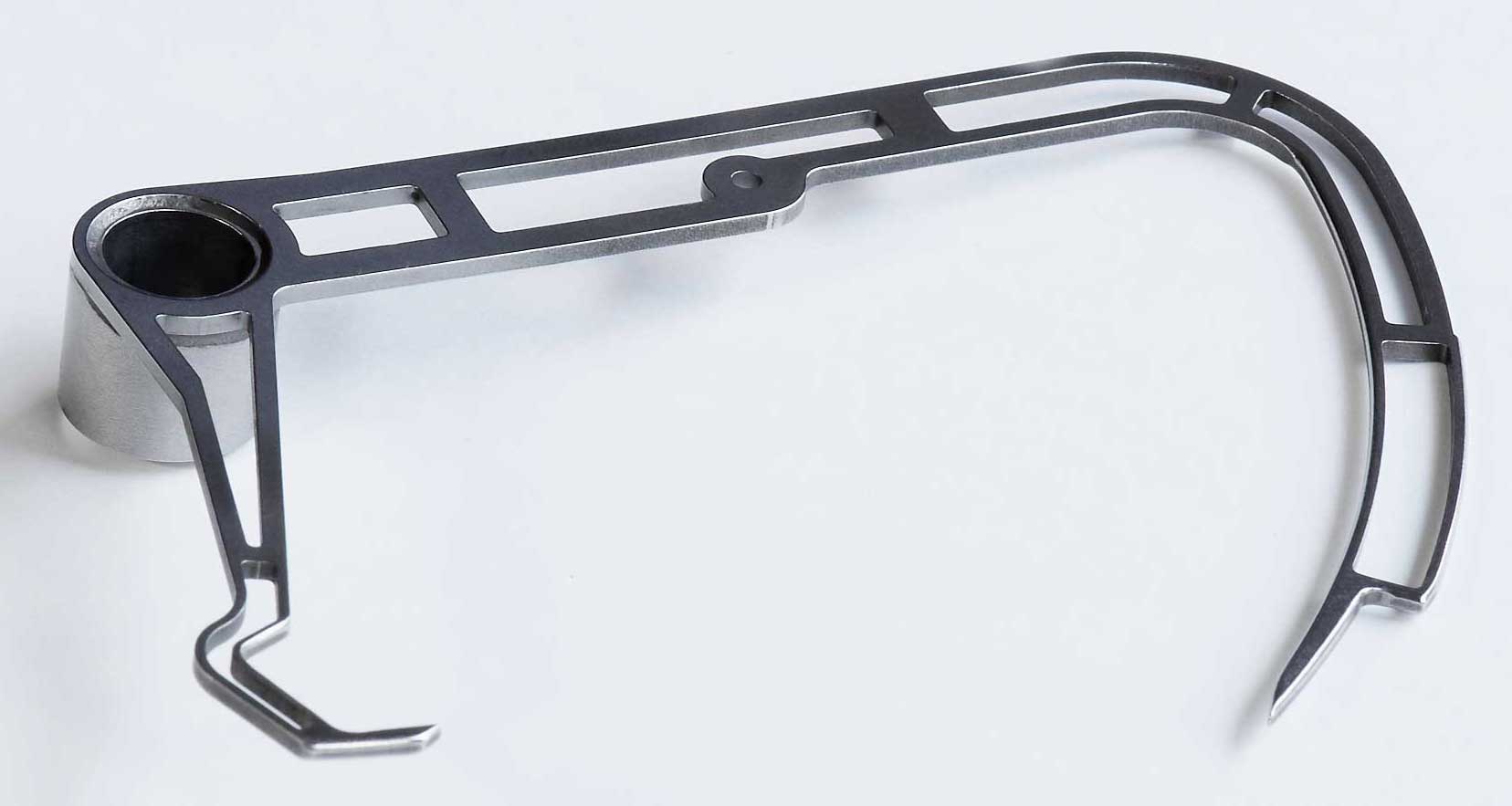 Well equipped for the future

Obviously, the performance features of the current FA20-S Advance are superior to those of its antecedent. Cutting speed and precision were the all-important attributes for Roman Weber. Added to these are the large machining range and high dependability. The latter is an important aspect, as the machine runs regularly without super-vision. The manager sees the advantages: “The FA20-S Advance offers us wide-ran­ging machining options, and these give us a high degree of flexibility.” In addition, the Mitsubishi Electric wire erosion ma­chine achieves impeccable results, which is an absolute must for Roman Weber GmbH’s work.

The range of parts that Roman Weber GmbH produces for its customers is so varied that the flexibility of the FA20-S Advance is more than profitable. Small series for medical technology or batch sizes of up to 4,000 units are part of the daily routine for the wire eroders in Tobel. Even parts for the home-made sports car can be cut on the machine from Mitsubishi Electric to the required standard of quality. For instance, the car’s wheel carrier is a component that has to be completely wire-cut. “The 4.5 kilo part is cut from a 90 kilo steel block,” Roman Weber adds.

Well equipped for the future

Roman Weber GmbH has all the requisite machinery, and there’s certainly no lack of expertise. Roman Weber will therefore continue the trail of success of the years so far: “We’ve always had plenty of business from medical technology and we want to expand this activ­ity. In the automotive industry, niche products are the backbone.” Roman Weber also intends to continue to refine his sports car. “In five years, we want to see ten of the new model on the roads.”

Core business:
Production of high-grade parts for medical technology and the automotive industry and the construction of the company’s own sports car

How would you describe in a sentence what your company does?
We manufacture orthopaedic instruments and implants for medical technology, produce prototypes, tools and moulds for the automotive industry and build our own sports car.
What’s different about how you do things now, compared to five years ago?
Our work processes are even more streamlined and efficient.
Where do you see your company in five years?
In our core business, we’d like to raise the share of medical technology to 75 per cent. We want to launch a new model of our sports car and sell ten.
What was your biggest business success?
The production of 1,000 cutting blocks in next to no time – on the old FA20 from Mitsubishi Electric that we had at the time.
What’s your favourite way to relax?
Cooking a four-course meal as perfectly as possible.
What attributes do you value most in other people?
Efficiency, friendliness, honesty and the ability to recognize and admit one’s own mistakes.
What was the best advice that anyone ever gave you?
First of all my father told me that any business takes seven years to get established. And then we were told in the speech after we’d be awarded our diplomas: “Nobody needs you. What you can do, many others can do as well. You have to build up your own network and develop yourselves further.”
How would you briefly describe your occupation to someone with no technical knowledge?
We cut things with a wire – much like with a fretsaw – with great precision and achieve extremely fine surfaces in the process.

Before setting up his own business, Roman Weber learnt and practised the trade of toolmaker.