Since founding his company in March 2016, Frédéric Thiervoz in ­Marigny-­Saint-­Marcel, France, has become a highly valued supplier to tool and mould-makers in his region. 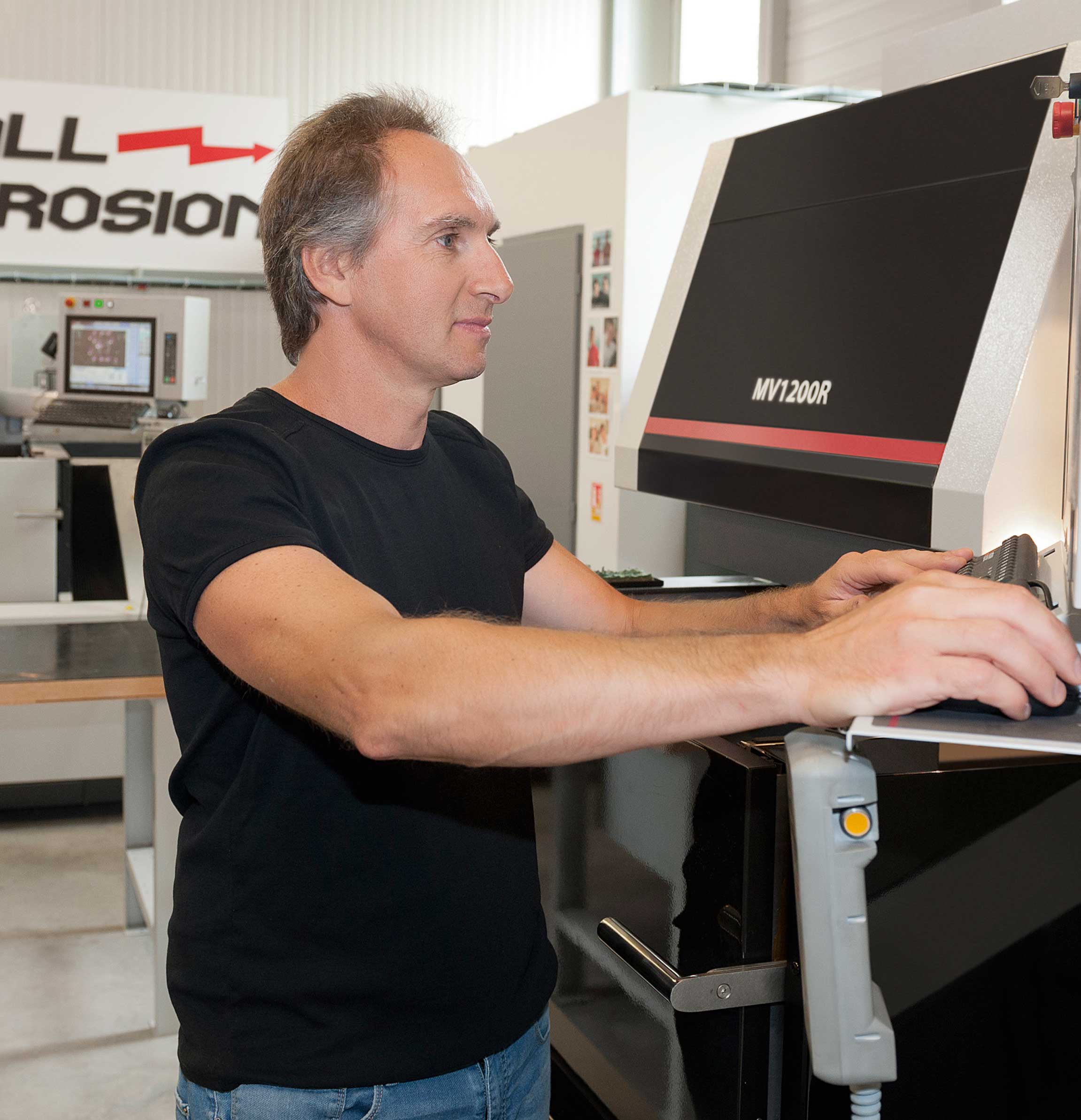 Since founding his company in March 2016, Frédéric Thiervoz in ­Marigny-­Saint-­Marcel, France, has become a highly valued supplier to tool and mould-makers in his region. A climate of trust between ­customers and ­suppliers and an investment in high-grade MV1200S and MV1200R ­wire-cut EDMs from Mitsubishi Electric have had a large hand in his success.

One man, one Ium.

Start-ups are a big talking point. Usually they are associated with spectacular ideas, with visionary projects in the IT and services sector in the public eye. Classical industries like manufacturing, on the other hand, tend to be largely disregarded. But there’s plenty of ­potential in this area as well – as demonstrated by Frédéric Thiervoz. His wide-ranging experience of wire-cutting goes back to 1991. However, after 25 years, he saw ­little opportunity for advancement in his static career situation, and this is why he seized the opportunity to set up his own business. In hindsight, his decision has been fully vindicated. “On my way to success, I have been able to benefit from a climate of trust between me, my customers and my suppliers,” he adds. 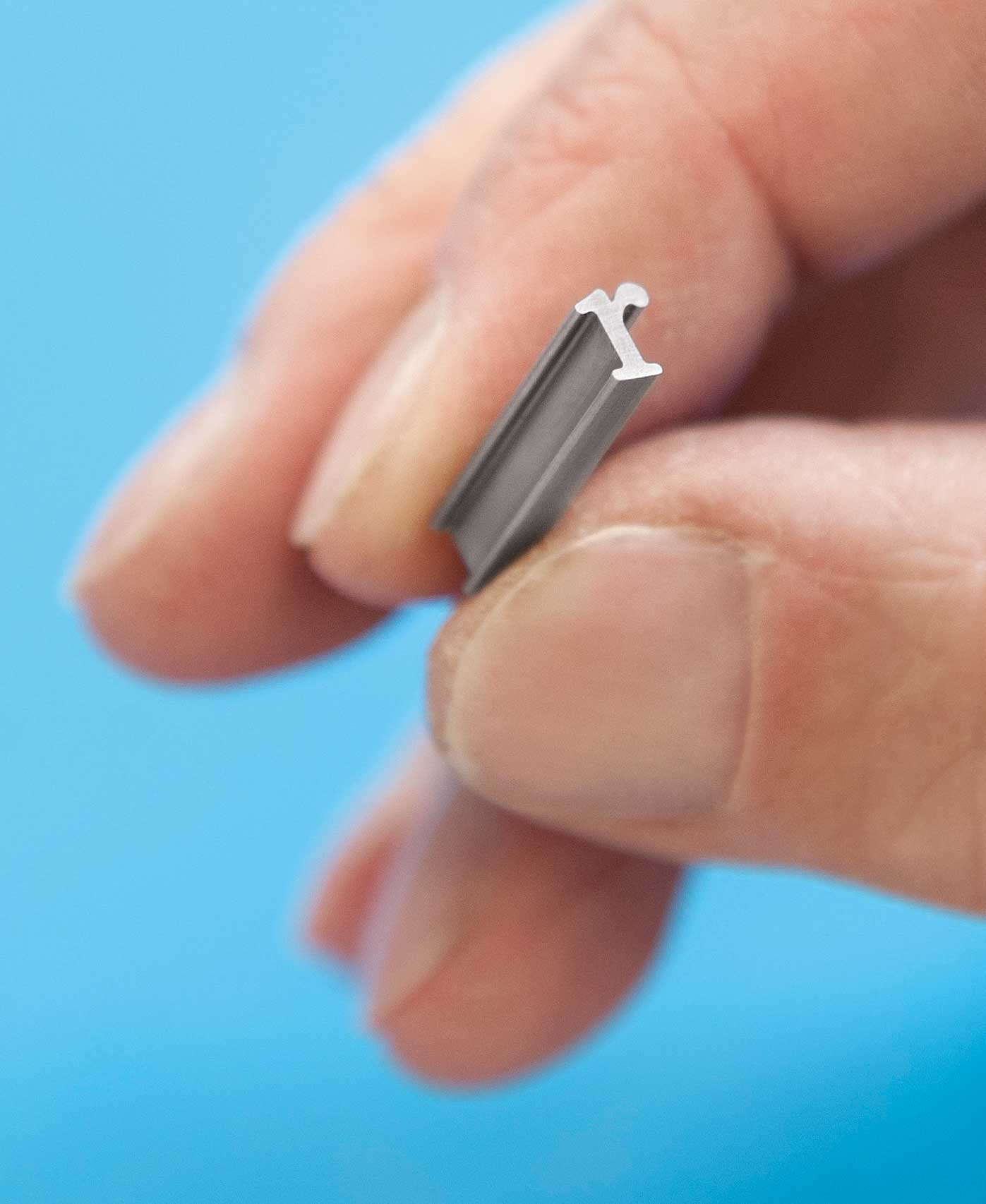 Sharp-edged letter wire-cut out of a block.

Thiervoz’s company specialises entirely in the wire-cutting of high-grade precision parts. He offers a great deal of flexibility, he stresses. He produces components as one-off items and in small series for tool- and mould-makers, e.g. copper electrodes and mould in serts, as well as single and replacement parts for medical technology, textile machines and general machine manufacture, e.g. gearwheels, nozzles, and cutting punches and dies. The striking feature of these parts is that they are made of hardened or creep-­resistant steel alloys or other hard materials such as sintered high-speed steel or also carbide. Thiervoz has meanwhile acquired a good reputation on the strength of his high flexibility and absolute dependability. He receives his work from larger companies in the industrially densely populated Arve valley as well as from the neighbouring French and Swiss industrial regions to the east of Lake Geneva. 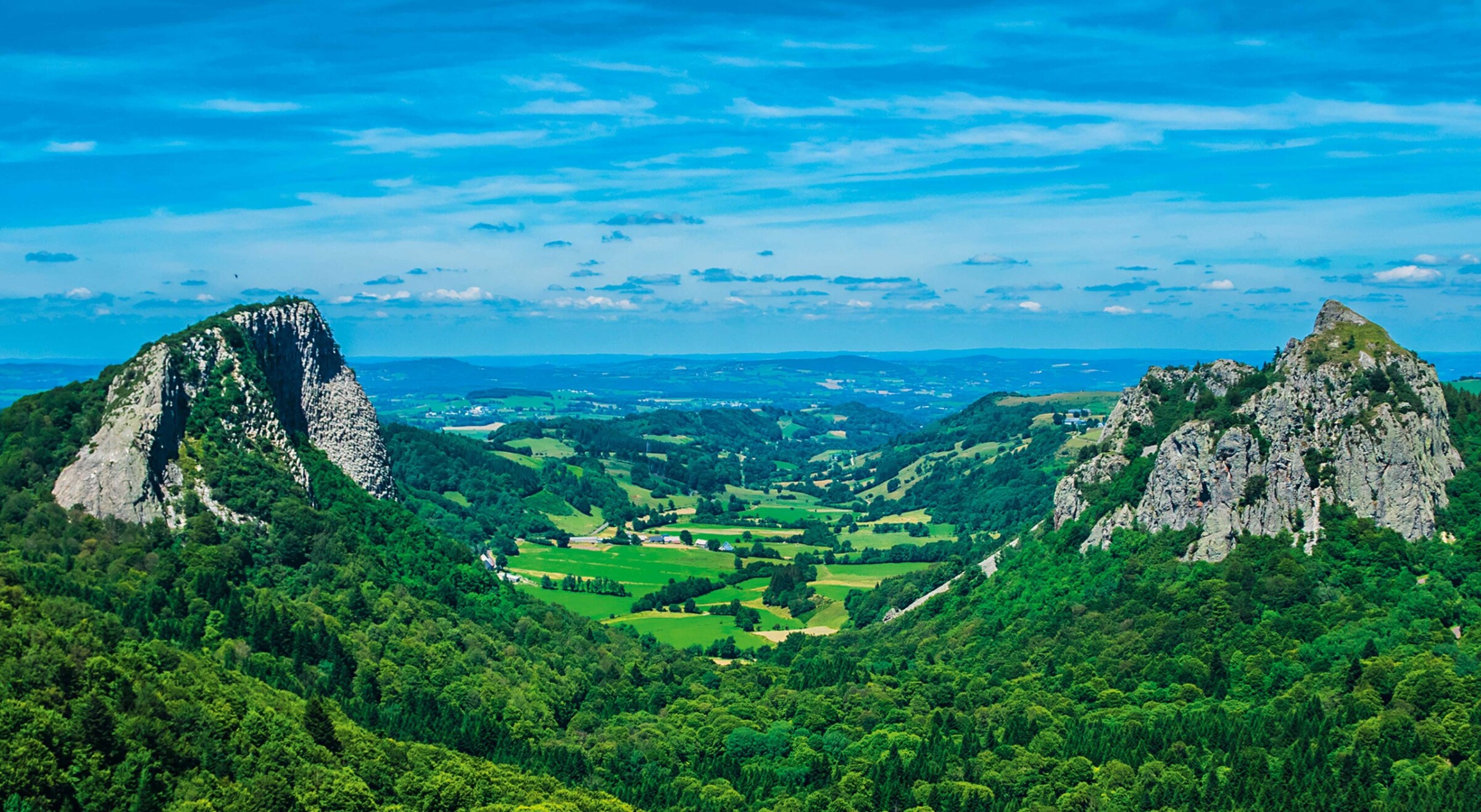 The famous landscape of the Arve valley south-east of Lake Geneva is industrially densely populated while offering plenty of countryside.

Superlative accuracy coupled with high- speed throughput
Thiervoz finds himself regularly confronted with mutually conflicting demands from his customers. “They want their parts to be produced faster but also with greater accuracy,” he says. Today, accuracy in the range of 2 to 3 µm and surface finishes of Ra 0.1 µm are virtually standard. In addition, Thiervoz stresses, customers naturally want their parts to be produced ­inexpensively and, better still, at lower cost. On ­setting up his business, he was therefore on the lookout for suitable machines enabling him to satisfy these ­demands. He has always been convinced that EDM technology plays a central, if not the decisive role. “For hard materials, difficult geometries and very small parts, there’s hardly a technical or economic alternative to EDM. This technology will be a mainstay in the coming years.” Thiervoz even believes that this technology will even grow in importance. The proportion of hard and super-hard materials in industry is constantly increasing. This applies not only to tool- and mould-making, but also to special areas of machine manufacture, medical technology and aerospace. “These components are best, if not exclusively, produced by wire-cutting or die-sinking,” Thiervoz claims. When he founded his tool-making business in Marigny, he chose a wire-cutting machine from Mitsubishi Electric over products from the competition and invested. He invested in an MV1200S. 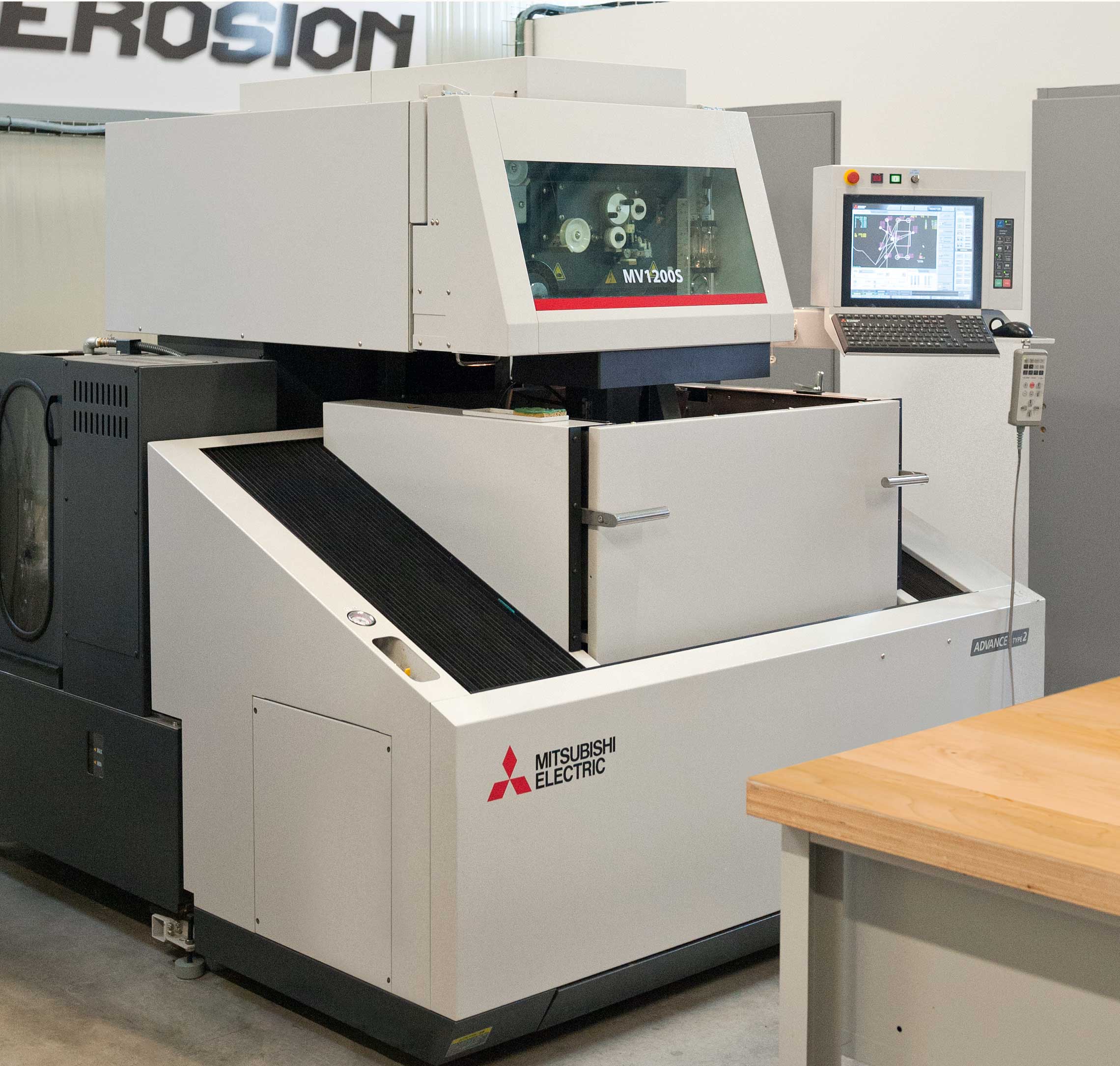 Thiervoz exploits the benefits of two variants of the same machine, the MV1200R and the MV1200S.

Simple and comfortable optimisation of all processes.

He was particularly impressed by the machine’s technical features and forward-looking ­technology. “In addition, there was the confidence that the employees of Delta Machines, the French distributor for Mitsubishi Electric, placed in me and my business ­strategy. I was able to persuade them that my firm would be operating successfully after only short while,” Thiervoz explains. In the two years since, the MV1200S has proved to be a resounding success. Thiervoz generates the required NC programs at an external CAD/CAM workstation. The component drawings he receives from his customers as 3D data. For simpler ­workpiece geometries, he also exploits the benefits of the ADVANCE PLUS CNC control from Mitsubishi Electric, which enables him to program conveniently at the machine. The already set parameters accelerate the production of the NC programs. In addition, thanks to his wide-ranging ­experience of wire-cutting, Thiervoz is able to easily and comfortably optimise all processes. “Process parameters can be changed at the CNC ­control at any time. I can store them in the memory. This contributes to faster and more accurate operations. In later similar machining processes, I can conveniently and quickly retrieve at any time empirical values that have been optimised in practice,” Thiervoz explains. 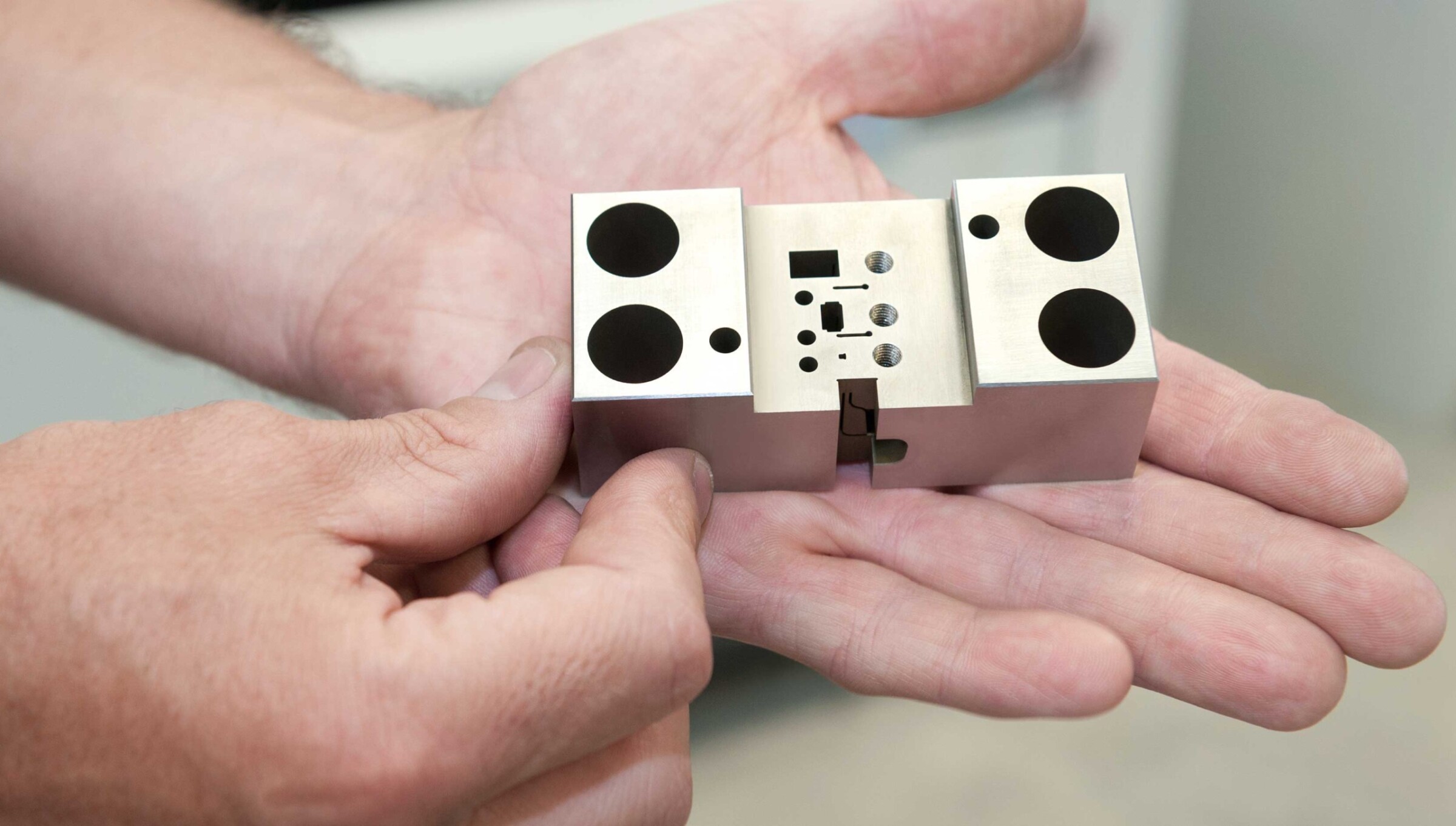 With 2 to 3 µm accuracy, Thiervoz machines components out of hard materials for mould- and tool-making, medical technology and general machine manufacture.

For the firm in Marigny, the accuracy and high quality of surface finish were initially the most important factors during wire-cutting. After a few weeks of practical experience with the MV1200S, he realised that the MV1200S fully satisfied the requirements that customers expect today. Component accuracy to the nearest 2 to 3 µm can be effortlessly achieved. Surface quality to as low as Ra 0.1 µm is mastered by the MV1200S in Marigny with the aid of the integrated fine finishing generator.

High machining speed was initially irrelevant for Thiervoz. He can allow machining processes to take place unsupervised, which means he can work at night and into the weekends. This frees up productive time in which components can be punctually completed. “The wire EDM systems from Mitsubishi Electric operate extremely reliably. This is also made possible by the automatic wire threader. After wire breakage we can fully rely on the machine to automatically resume the process within the shortest time,” Thiervoz reports. Because of the way he works, he only noticed after several weeks that the wire EDM system from Mitsubishi Electric also runs much faster than the rival machines that he was familiar with from his previous job. As a result, these wire-cutting machines yield an additional economic benefit, particularly when it comes to series production. 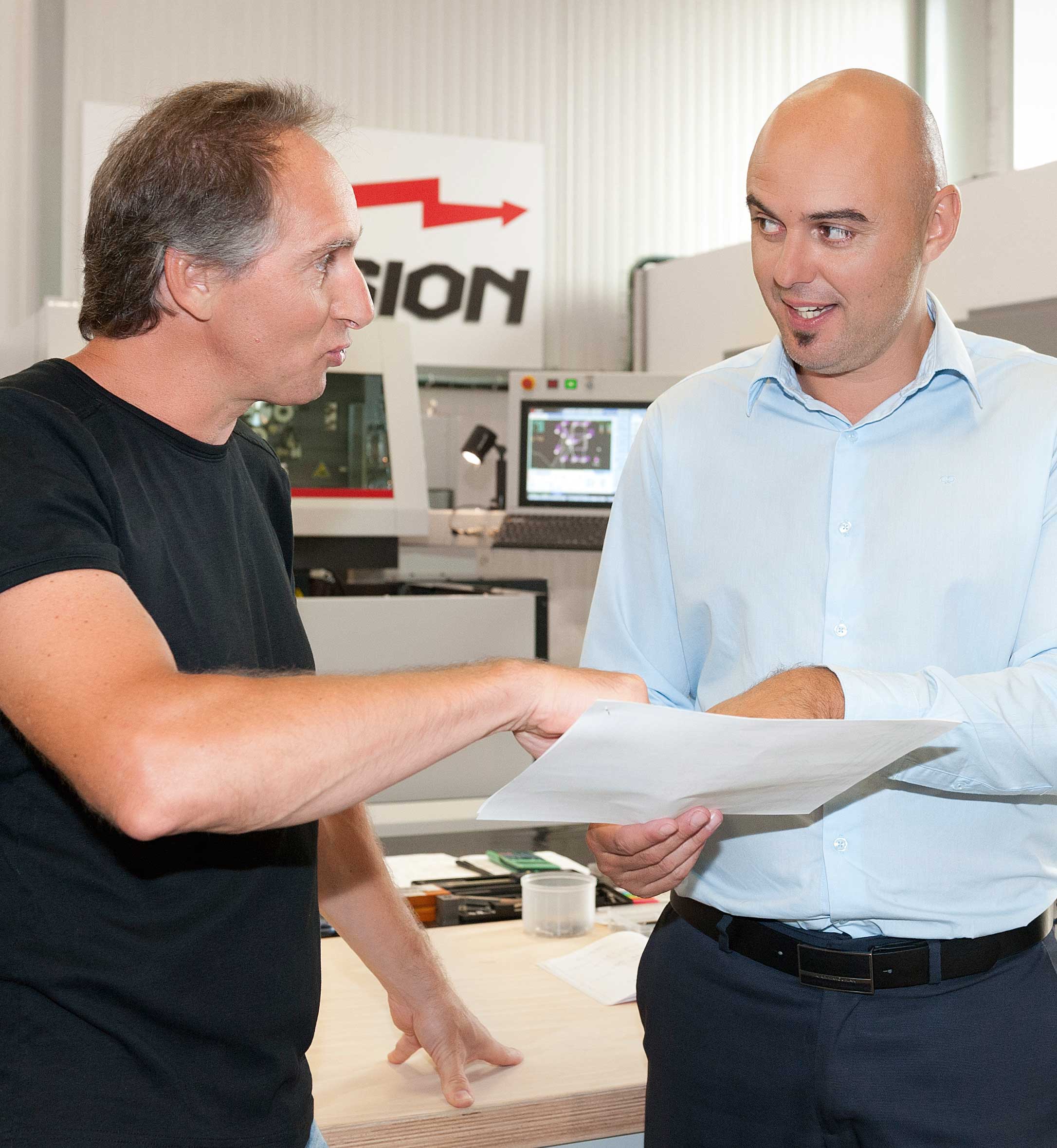 Because of the higher machining speed, Thiervoz is ­capable of nesting a larger number of smaller ­components on larger pieces of plate. The MV1200S then fully machines these overnight. In the case of larger geometries, the machine is known to ­handle three instead of the expected two components within a single shift. “Although I wasn’t originally aware of this, the wire EDMs from Mitsubishi Electric deliver an extra advantage by operating not only more accurately and reliably, but also faster. I benefit from this firstly due to lower costs, but also because of the greater flexibility. Within a given time I can now machine several different components,” Thiervoz stresses. The energy efficiency of the machines of the MV1200 series also contributes to their high economy. After several months of experience, Thiervoz can now confirm that they consume up to 30 per cent less ­energy than machines of the competition.

Thiervoz is thoroughly satisfied with his investment in the MV1200S, and this is why he purchased a second wire-cutting machine from Mitsubishi Electric, an MV1200R, in April 2017. These machines now meet all the various requirements in terms of ­accuracy, ­component size and rapid machining. “These wire EDMs are largely instrumental in enabling me to ­machine a large range of jobs. With their high ­process ­security and machining speed, they also ensure that I can keep costs low,” says Thiervoz. The confidence that he has placed in technology from Mitsubishi Electric has been fully justified, he says. With these wire-cutting machines, he can demonstrate day after day that customers can afford to bank on his work. Lasting success, says Thiervoz summing up, is based above all on mutual trust. 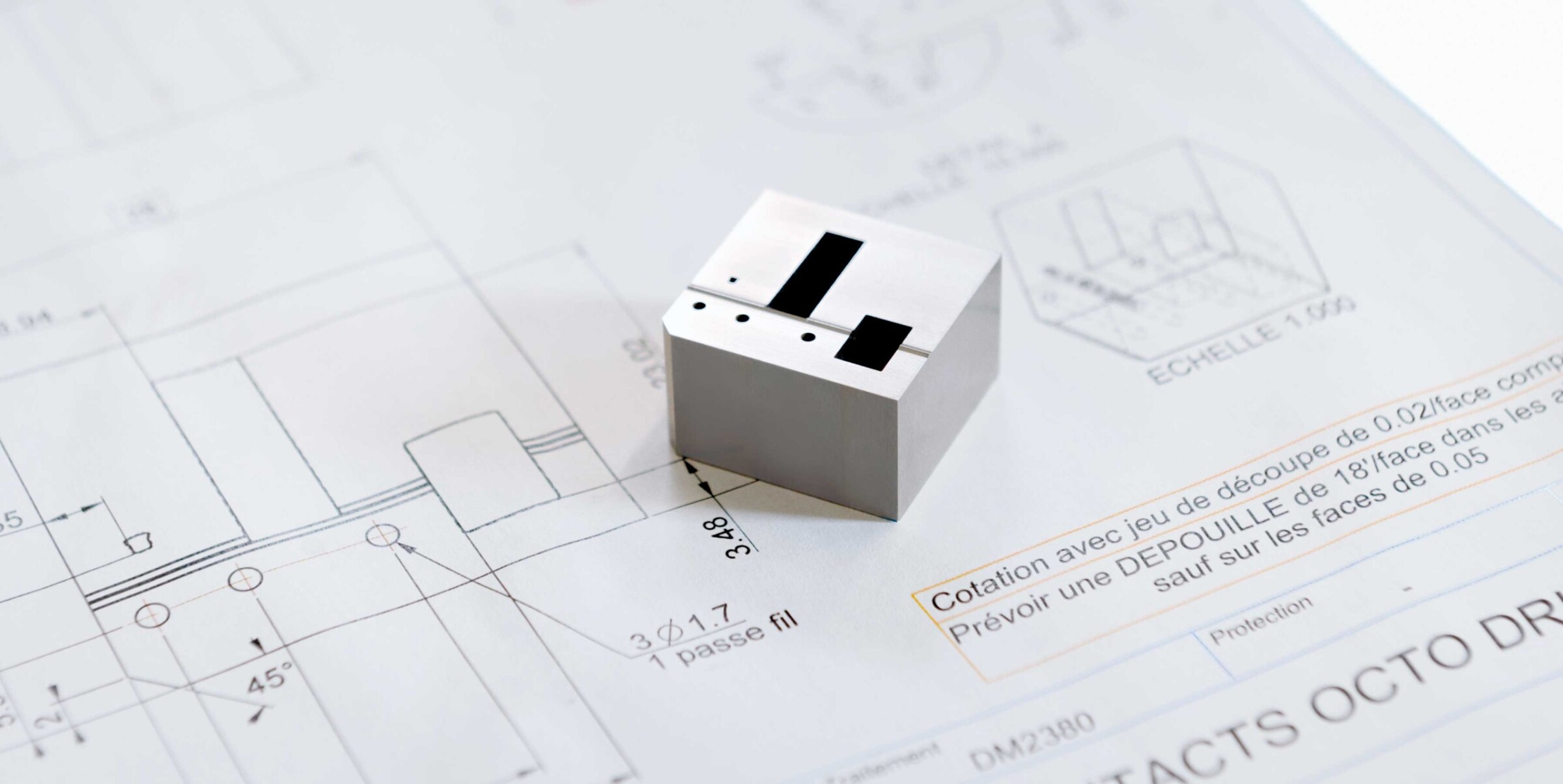 Name and place of company:
All Erosion
France

Core business:
Production of high-grade precision parts for tool- and mould-making, the automotive, electrical and electronic industries, and precision mechanics

How did you earn your first money?
During a holiday job in the mould-making workshop of sports equipment manufacturer SALOMON.
What motivates you?
Familiarising myself with new technologies and integrating them in my company. And also cultivating and improving personal relations with my customers.
What’s different about how you do things now, compared to five years ago?
The new CAM systems and the two wire cutting ­machines from Mitsubishi Electric have changed everything for me. I have managed to optimise my production processes and expand my production capacity.
Where do you see your company in five years’ time?
I’d like to retain my current working philosophy that puts the quality of my work and of personal ­relationships first.
What was your biggest business success?
Setting up my own ALL EROSION business and making it a success.
What’s your favourite way to relax?
I need regular physical exercise. I enjoy hiking in the mountains and skiing.
What attributes do you value most in other people?
Honesty and integrity.
How would you briefly describe your work to someone with no technical knowledge?
I produce precision mechanical parts. 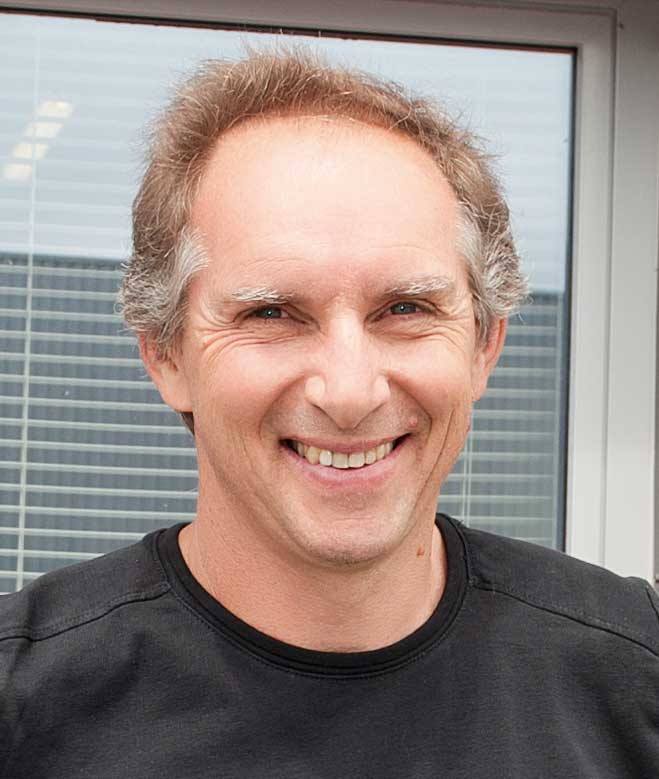