Building on its successful company history, Neubeck & Wiedemann GmbH is well equipped and firmly established in the marketplace as a metalworking specialist. For the last eight years, wire-cutting machines from Mitsubishi Electric have had a major hand in this. 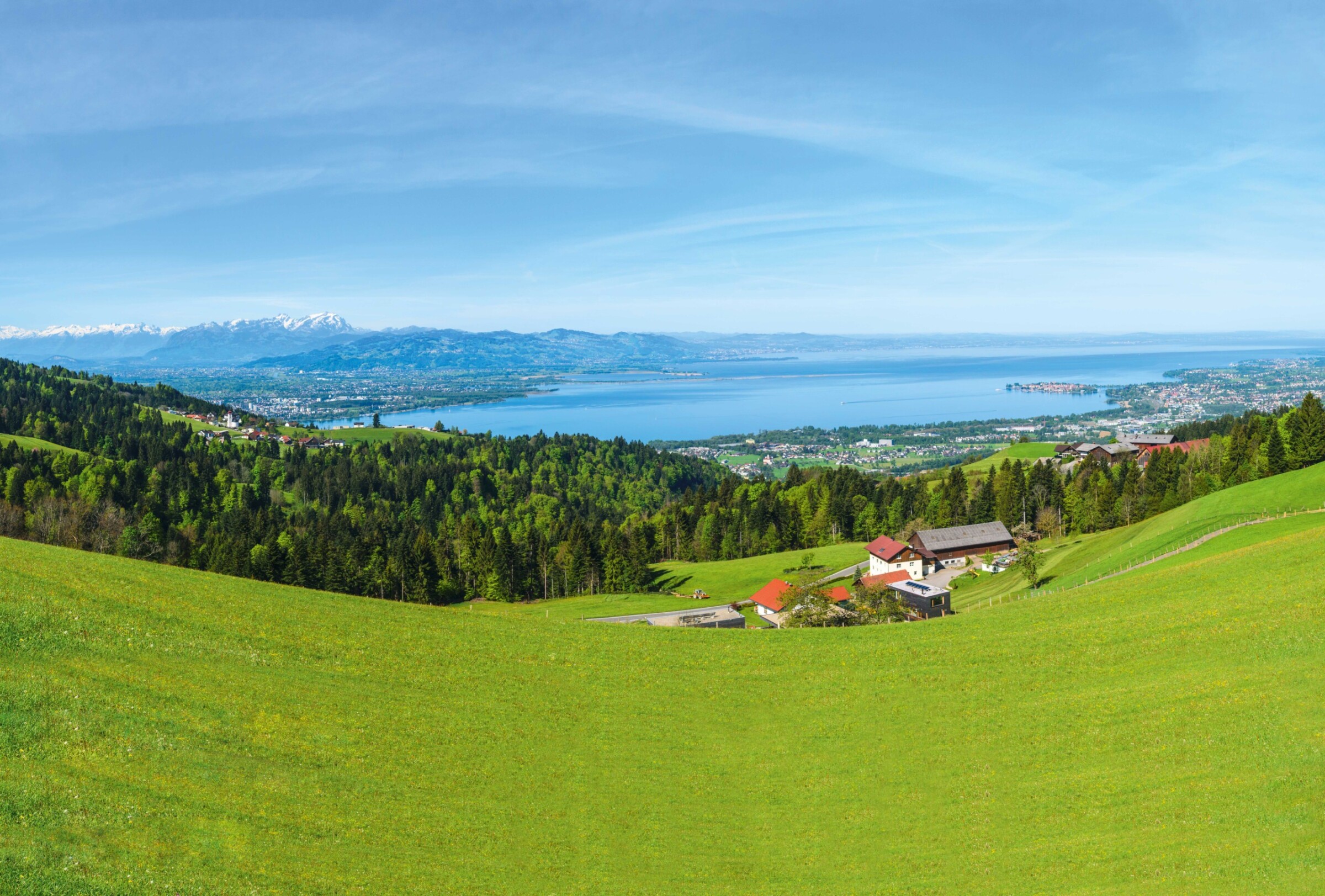 Building on its successful company history, Neubeck & Wiedemann GmbH is well equipped and firmly established in the marketplace as a metalworking specialist. For the last eight years, wire-cutting machines from Mitsubishi Electric have had a major hand in this.

The circumstances of the independent family company couldn’t be better today, with its location at No. 13, Himmelreich in Stockach, the “Gateway to Lake Constance”, as the little town of Stockach with its population of 17,000 likes to call itself, and good transport links to trunk roads and the motorway. In its modern new building with two attractively integrated production shops providing 2400 square metres of space for over 30 machine tools, some 40 employees mainly produce precision components as one-offs or in series, as well as punching tools for toolmaking and the production of jigs & fixtures. 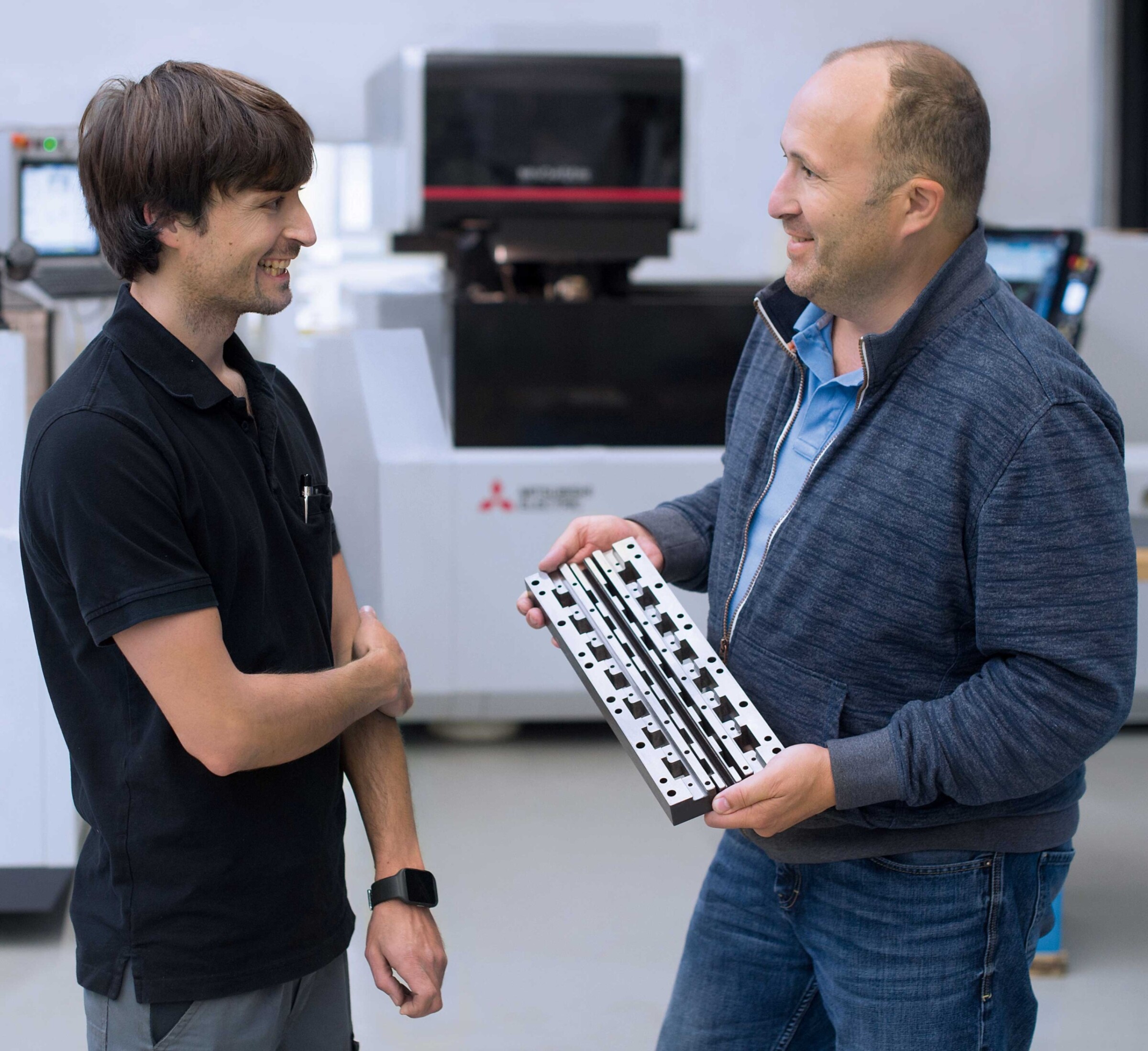 The wire EDM has done a neat job of work. All the ­pockets of the die plate show high-quality cuts.

Stockach – the „Gateway to Lake Constance“.

The foundations for what was originally a tiny business were laid by two men called Neubeck and Wiedemann in the centre of Stockach in 1970. Since 1994, a new owner family has been investing heavily in the business, with the company relocating to Himmelreich industrial estate in 2008. Production space had ­doubled by 2015.

Young workforce in a region of attractive employers

Jürgen Läufle, the Managing Director employed by the company’s owner family, has been running the company for seven years and is very proud of how things have been developing. “I joined the company as a fully authorised officer ten years ago, and then the recession struck. It was as if a switch had been flipped. But our good short-time working arrangement prevented us from having to lay anyone off. Exactly a year later, the switch was flipped back and we were in the fortunate position to have all of our employees back in production.” Since then the company has grown quickly, ­almost too quickly, Läufle continues and mentions the problem of the shortage of skilled employees. Located not far from Switzerland as a popular place to work and with large German industrial companies nearby, a small or medium-size business finds it difficult to hold its own. Läufle pins his faith on training and his young workforce. “We have a large proportion of apprentices with at least two new trainees per year. With apprenticeships lasting three and a half years, we have up to ten apprentices at peak times doing their training here, with the goal of integrating them successfully in the production team.” And Läufle even mentions that he relishes having a young workforce of exclusively permanently employed skilled workers with an average age of 35. 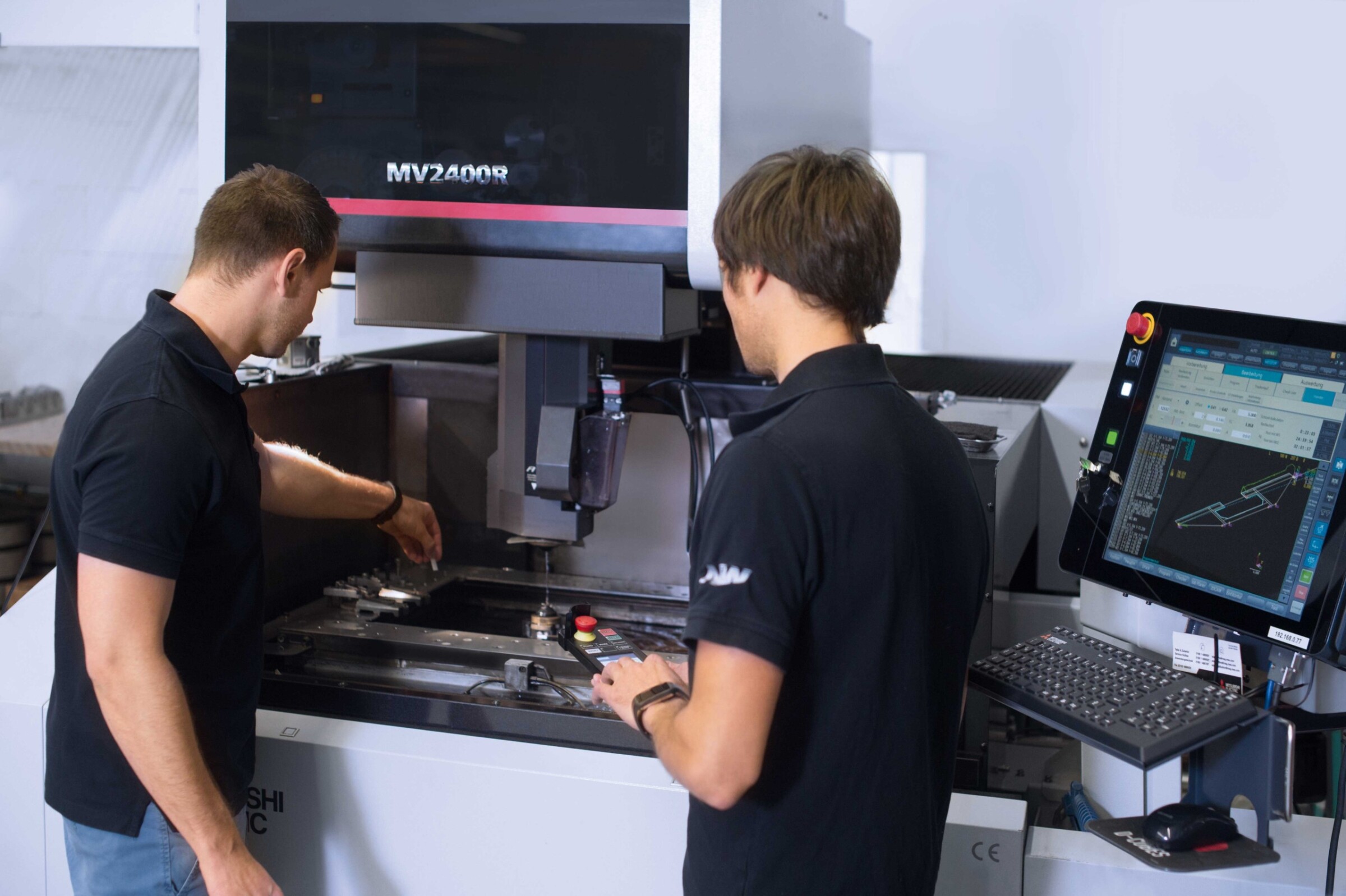 The men at the wire-cutting machines: Thomas Mayer (left) and Dennis Scholter. They both know the machines inside-out, write the programs and set up the machines.

Quality is the defining yardstick for sales among customers

Neubeck & Wiedemann is a service provider. All areas of the company are concerned with metalworking and preferably turning, milling, grinding, hardening, die-sinking and wire-cutting. Its core competence is in machine manufacture and mainly with components for machine tools such as flanges, spindles, shafts and bearing housings. It is characteristic, says the Managing Director, “that we have reciprocal business relations in machine manufacture, which means that we are also the customers of our customers”. Between 80 and 90 per cent of output consists of precision parts as single items or in small series and of prototype construction. In toolmaking, the company not only supplies standard solutions but also designs and develops its own punching tools and machines with their own controls and electronics to suit the customer’s needs. And these customers can be found in a wide range of sectors, such as machine and special-purpose machine manufacture, micromechanics, electronics, optics, measuring machine manufacture, a few companies in aviation and aerospace plus automotive component suppliers.

Starting off with a used machine seven years ago

Läufle is happy to introduce Dennis Scholter as his factotum for punching tools. Scholter is design engineer, developer, measurement engineer and wire-cutter in one. And it is wire-cutting that has become one of the company’s success stories. On a customer’s recommendation to integrate wire EDM technology in production, it purchased a used Mitsubishi Electric wire-cutting machine in 2011. Läufle explains: “This gave us an excellent opportunity to launch production in this area. The support from Mitsubishi Electric was quick to respond and outstanding. We got off to a very quick and very good start with the used machine. Within four to six weeks we were able to produce parts without assistance. After only two years we found that the used machine was no longer able to cope with the workload.” The volume of orders called for investment in the first new wire EDM, an MV2400S from Mitsubishi Electric. And Läufle explicitly mentions his good contacts with Angel Muñoz, EDM Area Sales Manager at Mitsubishi Electric. Some time later there was another bottleneck, and the second new machine from the Japanese manufacturer, its MV2400R Connect flagship, has been in operation at Neubeck & Wiedemann for the past year. The high workload of the wire-cutting ­machines has been ensured particularly by press manufacturer Schuler and demand from the company’s own punching tool activities, such as for the production of dies, punches and die plates.

Good customer contacts are the key to success

Cutting used to be carried out largely by die-sinking. This worked but wasn’t the correct method in Läufle’s opinion since it was neither efficient nor economic. He now appreciates the big advantage of wire EDM technology in its high-grade and what he calls “sensational dimensional and shape accuracy coupled with surface quality and flexibility”. He uses coated and uncoated standard brass wire, usually of 0.25 millimetre diameter. This means the Stockach company complies entirely with the machine manufacturer’s recommendations. 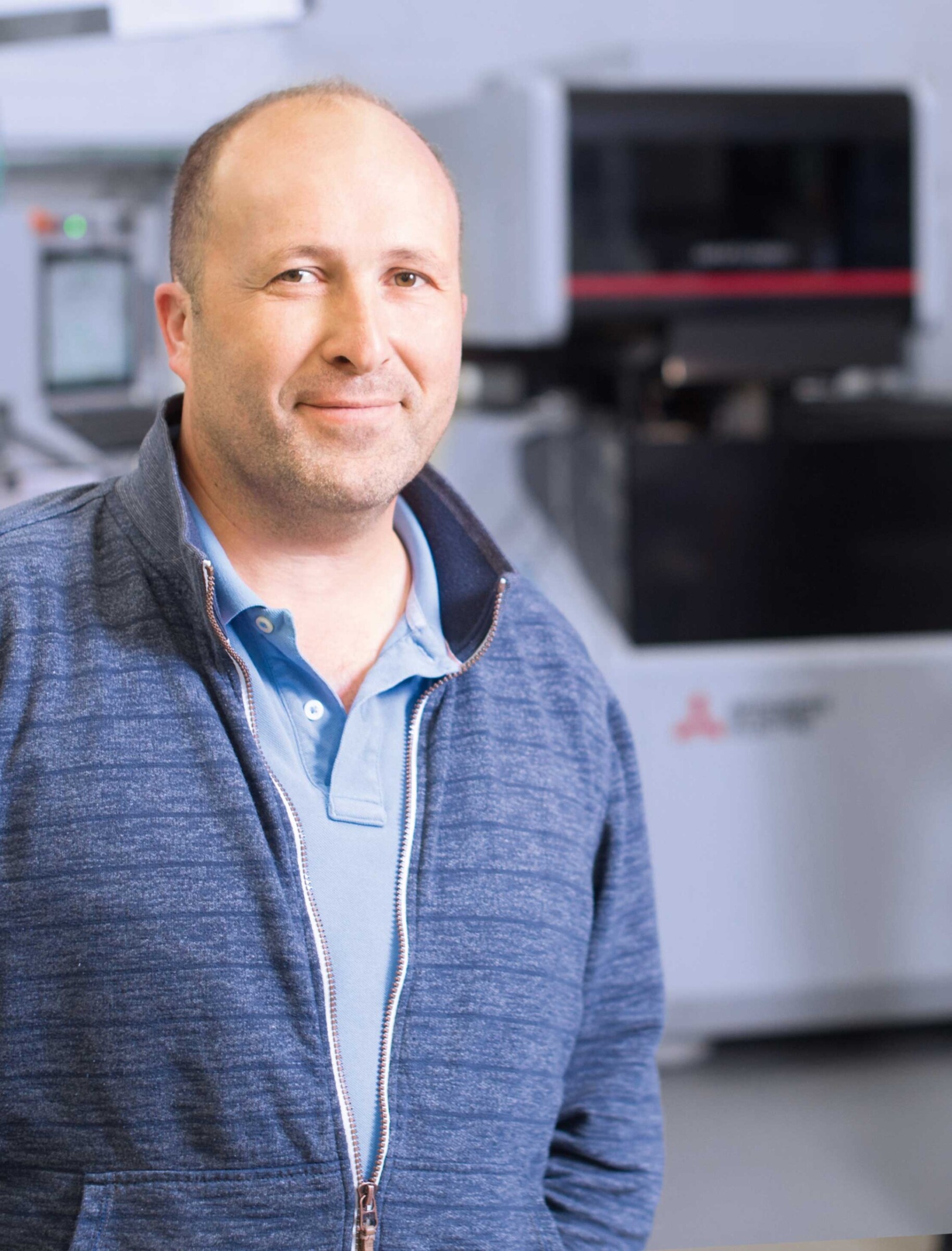 I’m delighted with the technology. We were late starters, but the machines have moved us forwards quality-wise. It was a technological leap from die-sinking to wire-cutting, particularly as far as machining time and accuracy are concerned. We can now cut a component twice as quickly and much more accurately.

For Läufle, the low-maintenance machines represent a quantum leap forward. “We used to have to obtain quotes from wire EDM specialists and thus lost a lot of orders from our customers. Because of the higher costs, we simply weren’t competitive. Since we’ve been able to quote our own prices, we’ve expanded, both in our output and in the range of sectors we serve.” 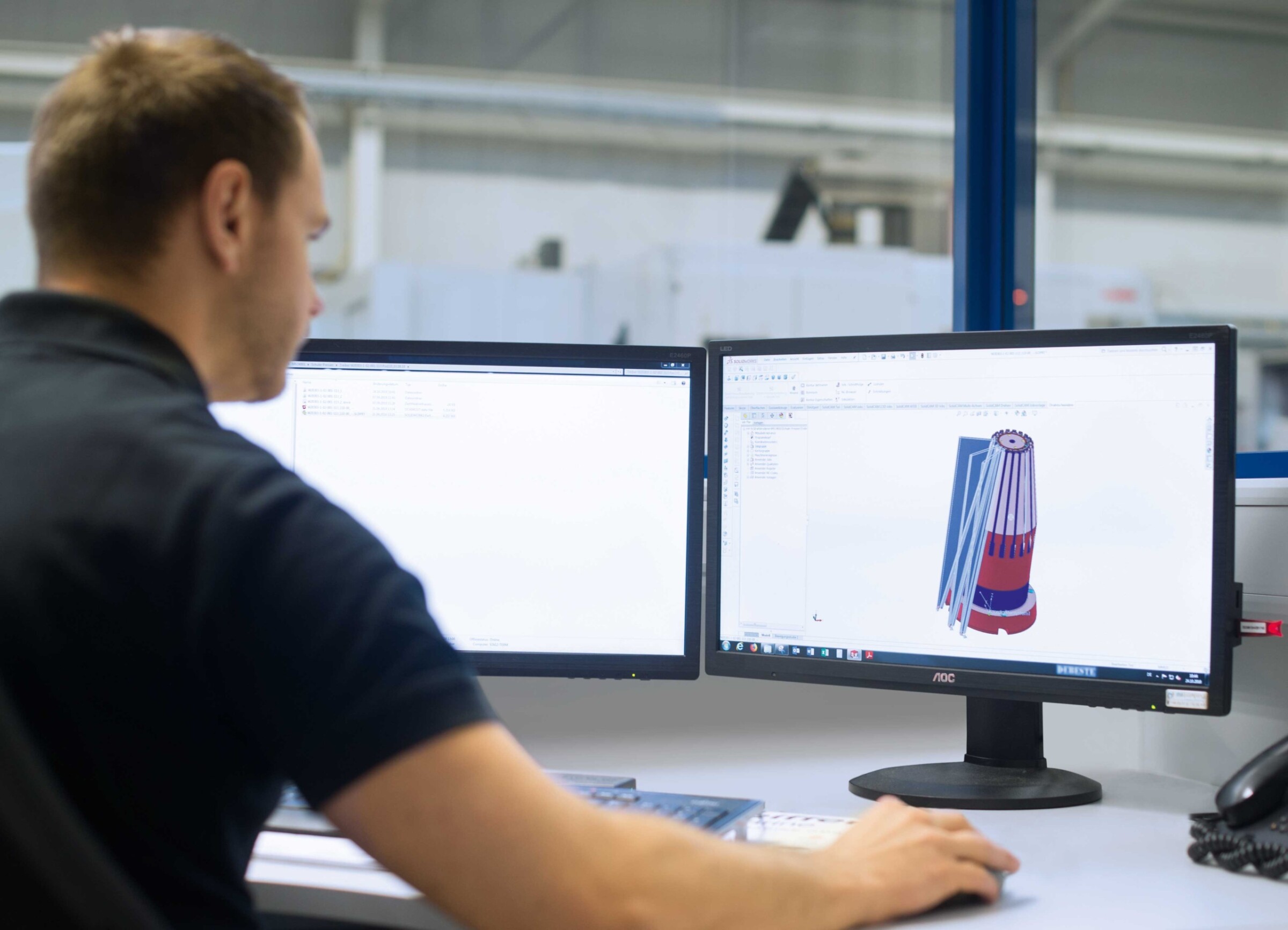 Before starting the machine, Mayer programs the machining of a press component for which the wire has to cut an angled contour.

He leaves no doubt that he repeatedly resorts with enthusiasm to Mitsubishi Electric. “Basically, we’re absolutely satisfied in all areas with the machines, their performance and the after-sales service. When a problem arises, we get quick feedback from the Mitsubishi Electric technology centre, even when we have a technology issue with critical parts, as recently with a component 300 millimetres high. We solved the problem together and were given tips for production. This is by no means usual and certainly not commonplace in the present day and age.”

What does your company philosophy entail?
As far as our employees are concerned, treating people fairly in every respect has top priority. Anything else results in distrust and ill-feeling.
What is your opinion of Industry 4.0?
In my view, the subject should be approached with balance and on the basis of feasibility in the case in question. For our production of single parts and small series, we have to think in longer time-scales than a catchword. The obstacles for us as a small business are very high.
According to an allegedly totally surprising, current study by the VDMA, digitisation has not helped to boost productivity. What’s your view on this?
This is no surprise to me. In the mass production of standard products, digitisation could deliver more. But hardly for us. I like to compare this with my position as a user of Microsoft products. Take the example of Excel: For our needs in our daily use of the software, things don’t get better with each new version. In fact, everything tends to get more complicated. Ten years ago, Excel only had a small number of functions, but ones that we actually needed. Today, the program is totally overloaded, which is no use to us. Not everything that’s offered actually helps us or improves our productivity.
What are your expectations of the future of Mitsubishi Electric wire EDMs?
EDM technology, straightforward and efficient machine control, and the after-sales service are really impressive. For the future, I expect the PC interface to be phased out and programming to be handled entirely by the machine. This certainly won’t make any difference to quality, but it speeds up production. At present, we’ve got the three stages of design, programming and machining. A direct transfer from design to the machine is theoretically conceivable. Maybe both solutions will have to be made available in the future. In my view, this is not a question of either-or.
What might by a topic of the future for Neubeck & Wiedemann?
Our topic will be 3D printing. I like to compare this to our success with wire-cutting. At the moment, we ourselves don’t yet have a market for 3D, but the starting point for wire EDM was the same. The first used Mitsubishi Electric machine was working to full capacity after only a year, so we’ve since invested in two new machines. That’s how we imagine progress will be with 3D printing – exciting prospects! 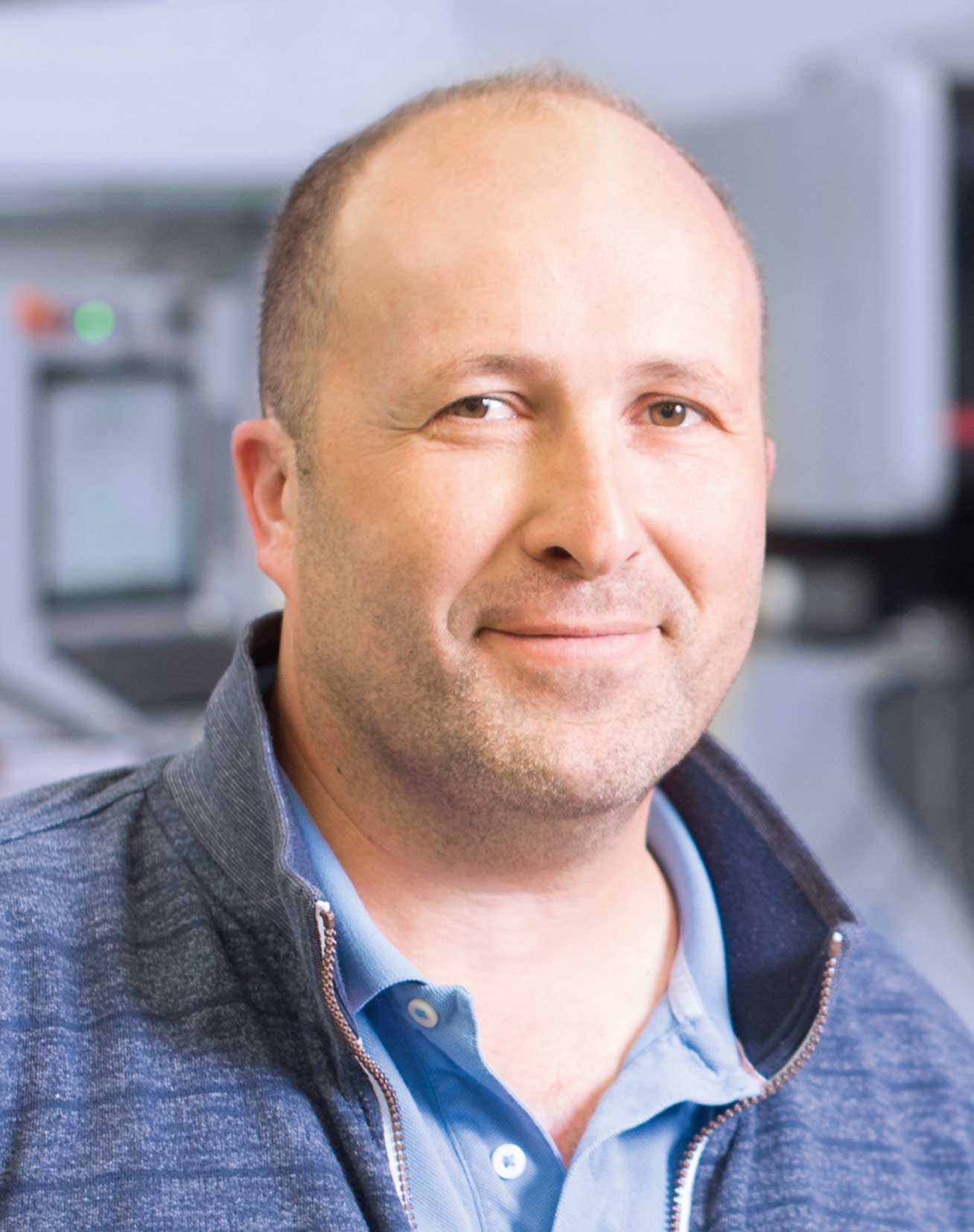