When you visit Salomon, you enter a world of sport. You can marvel at the high-class products and glossy photos of athletes in action on show. And you can also marvel at a MV2400S Tubular wire-cut EDM machine from Mitsubishi Electric.

When you visit Salomon, you enter a world of sport. You can marvel at the high-class products and glossy photos of athletes in action on show. And you can also marvel at a MV2400S Tubular wire-cut EDM machine from Mitsubishi Electric. 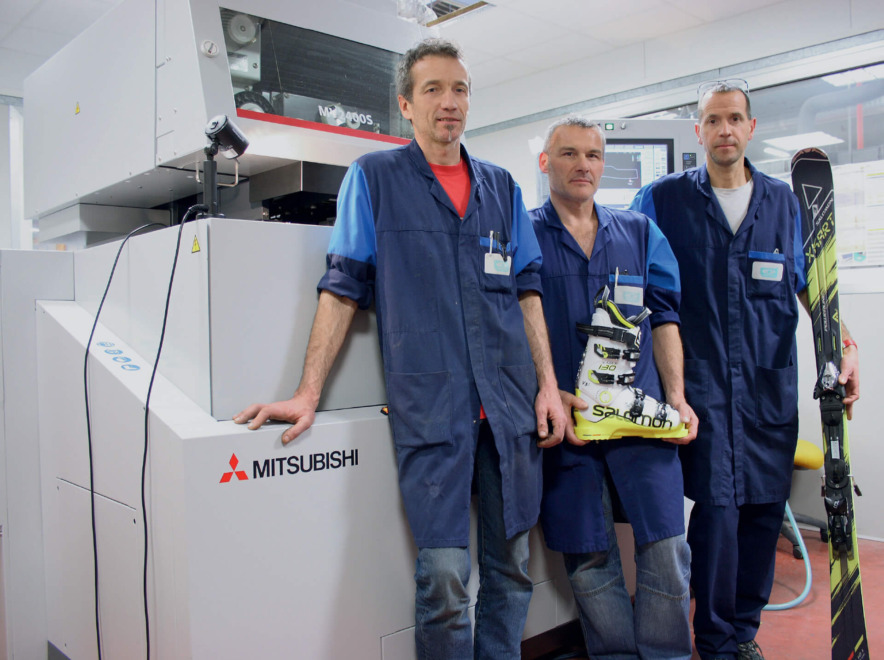 Roland Favre, Gilles Heritier and Alain Colomb (from the left,) in front of the MV2400S Tubular

Here in Annecy in the French Alps is where it all began in 1947. Founded as a family business, Salomon initially crafted skis and later the matching bindings in a small workshop. Since then, Salomon has evolved into a sports equipment manufacturer that has made a name for itself mainly in winter sports. Gilles Heritier, in charge of wire EDM in Salomon SA’s development department, runs his finger over the metal parts of a ski boot that have been cut on the MV2400S Tubular. “We use the machine for producing prototypes of the metal parts that we need for ski boots and bindings. Both of these are products of ours with a long tradition.”

Back in the mid-Sixties of the last century, the company developed ski bindings with an automatic release, also known as safety bindings. This was an innovation that catapulted Salomon to world leadership in 1972 with sales of over a million bindings. For ski manufacturer Zai in Graubünden, the company listed on the Lyon Stock Exchange produces special ski bindings that are an astonishing 350 grams lighter than the conventional alternatives. The first Salomon ski boot was successfully launched in 1980. Today, Salomon is the world’s biggest ski boot manufacturer. However, the lion’s share, about 60 per cent, of the work on the MV2400S Tubular is for orders from Mavic, a maker of quality cycles and cycling accessories that, like Salomon, belongs to the Finnish Amer Sports Group.

The operator cuts small parts on it during the day. For bulkier workpieces, the company, which has also been producing summer sports equipment since 1984, runs the machine unmanned at night and at weekends. In addition to the prototype components for ski boots, ski bindings and cycles, the MV2400S also machines parts used in the fabrication of end-products. The workpieces measure anything from a few millimetres to the size of the machine’s full work space.

“Mitsubishi Electric builds excellent ­machines. This is demonstrated by our tests in which the MV2400S came out on top.”

The project manager places a precision part on the table. “It’s important for us to cut as accurately as possible. After all, we want to achieve high visual quality and above all safety for the athlete. In view of this, we attach importance not only to accuracy, but also to surface finish, parallelism and contour trueness. High machining speed is also important.” A prerequisite for the desired precision is the machine’s drive concept with its tubular shaft motors and the Optical Drive System (ODS). Within the ODS, data interchange is handled by an optical network. The advantage of this is that, by using optical waveguides, Mitsubishi Electric’s ODS facilitates much faster and more efficient communication between the CNC control, servo boosters and Tubular Direct Drives.

Gilles Heritier stresses another point that is important for him in his daily work. “We need wire EDM so that we can respond swiftly to urgent orders. We can master this special challenge with the aid of the MV2400S Tubular. We’re consequently in a position to keep to the tight deadlines that we’re confronted with on a daily basis and no longer have to farm out work.” The tight deadlines mainly arise because of newly developed prototypes or because of modifications to these components that have to be implemented at short notice. And, as Heritier notes, the first manufacturer with a product on the market has an advantage over the competition.

However, in choosing the most suitable wire-cutting system, Salomon took its time. The company invested in the machine to replace one from the competition, and the negotiations took over two and half years. The MV2400S Tubular went into operation at the beginning of December 2013 after all the competitors participating in the bidding process had been eliminated one after the other. Heritier taps the frame of the wire-cutting system. “Mitsubishi Electric builds excellent machines. This is demonstrated by our tests in which the MV2400S came out on top. The decisive fact was that the manufacturer has consistently further-developed the machine and we benefit from the resulting refinements.” 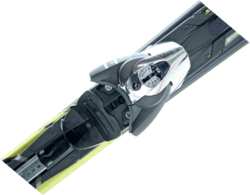 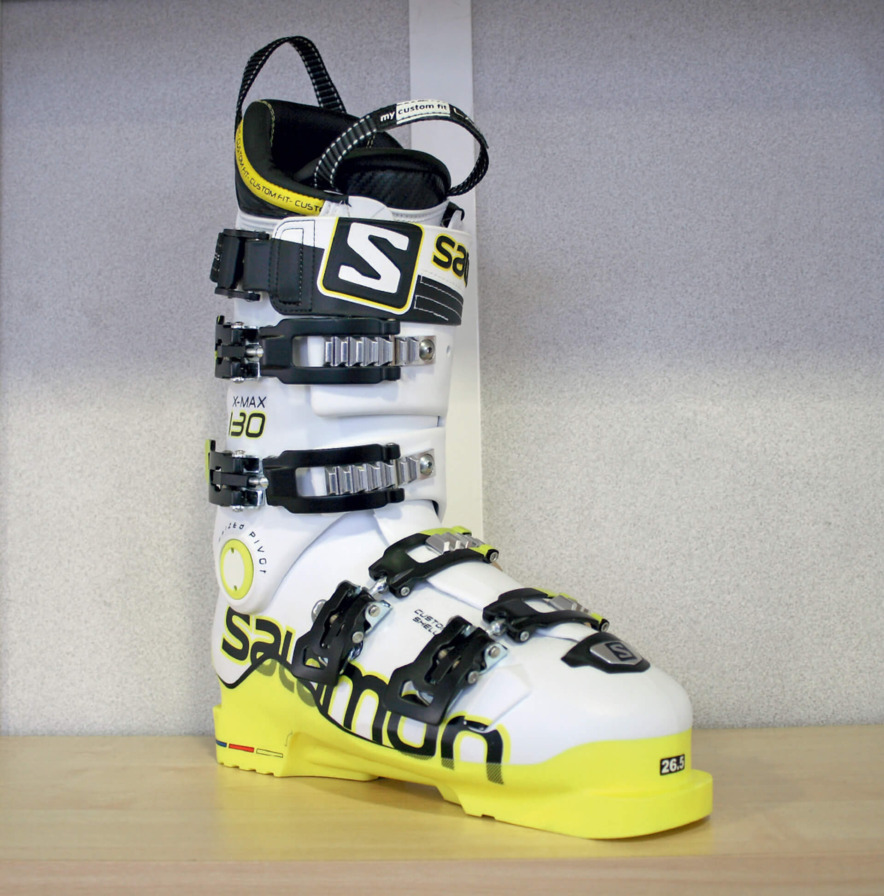 The metal parts of this ski boot are wire-cut on the MV2400S Tubular.

Mitsubishi Electric has also systematically improved the automatic wire threading system. This is essential for a lasting boost in working efficiency – an advantage that reveals itself particularly under difficult conditions. For instance, when threading in the kerf on thick workpieces or threading after interruptions in start-hole drilling. Alain Colomb, operator of the wire cutting machine, loads a new spool of wire in the wire station. “Today, rethreading takes 15 seconds – a process that used to take two and a half minutes.” 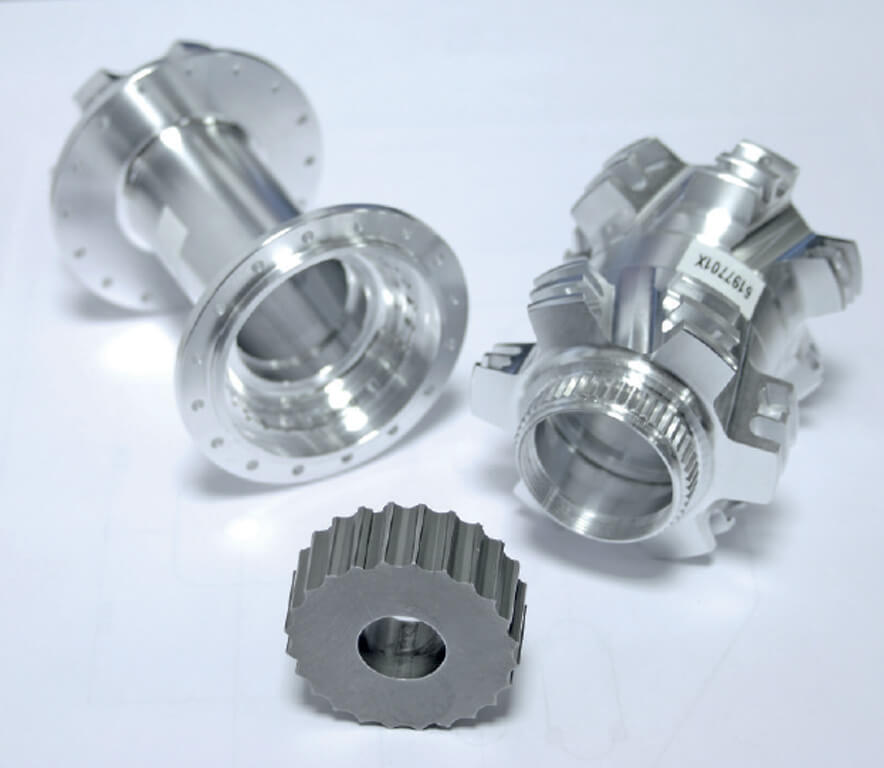 Heritier sees a difference like day and night in running costs, as they have fallen significantly thanks to significant savings on filter cartridges and ion exchange media as a result of reduced dielectric flow. Thanks to this combined with the optimised generator technology that makes it easier to filter out the sludge, Salomon claims only a tenth of the former expense in this area. Deionisation costs and wire consumption have also been cut. And the operator is also highly satisfied with the high energy efficiency of the MV2400S Tubular that finds expression in energy consumption slashed by up to 55 per cent. Taking the operating costs of the wire EDM system as a whole, they are only about a fifth of those of its predecessor.

To clamp the workpieces, Colomb uses clamping accessories that Mitsubishi Electric supplies as optional extras. He now starts the cutting job for the component displayed on the monitor at the control panel. “I personally love working at the machine. It’s so much more enjoyable than writing CAD programs. I’ve got used to the MV2400S Tubular very quickly, as it’s effortless to operate.” Programming is also a straightforward process. Roland Favre, mouldmaking manager for ski boots and injection moulding, points to a monitor. “We use the CAD software Go2cam to write the desired cutting program on the basis of the drawing.” The finished program is then transferred straight to the totally digital ADVANCE CNC machine control. It is also worth mentioning that Favre, like all of his workmates, enjoys working for Salomon. For this is where employees can combine their work with sport and benefit from their allegiance to the company in their free time as well. 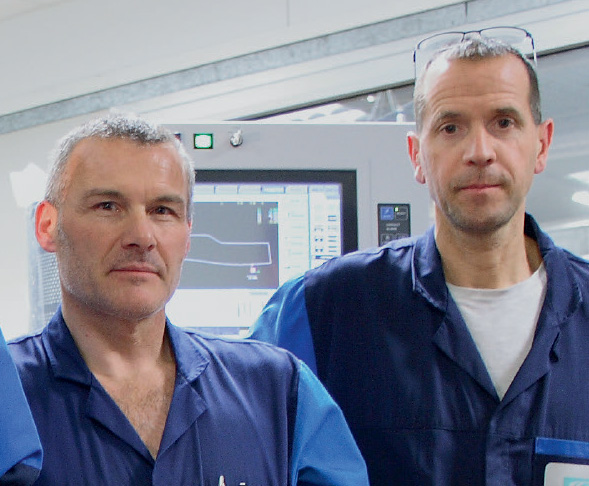